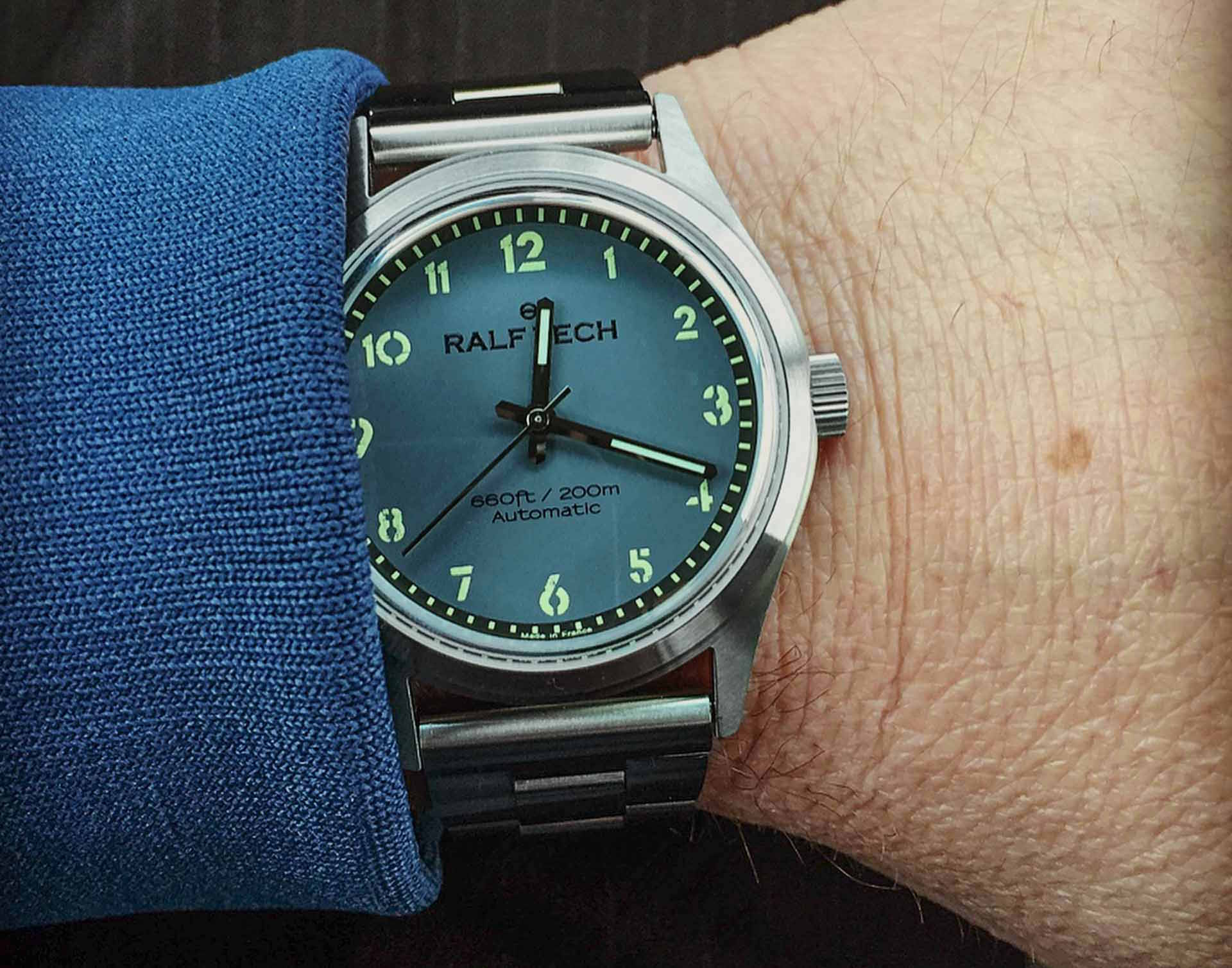 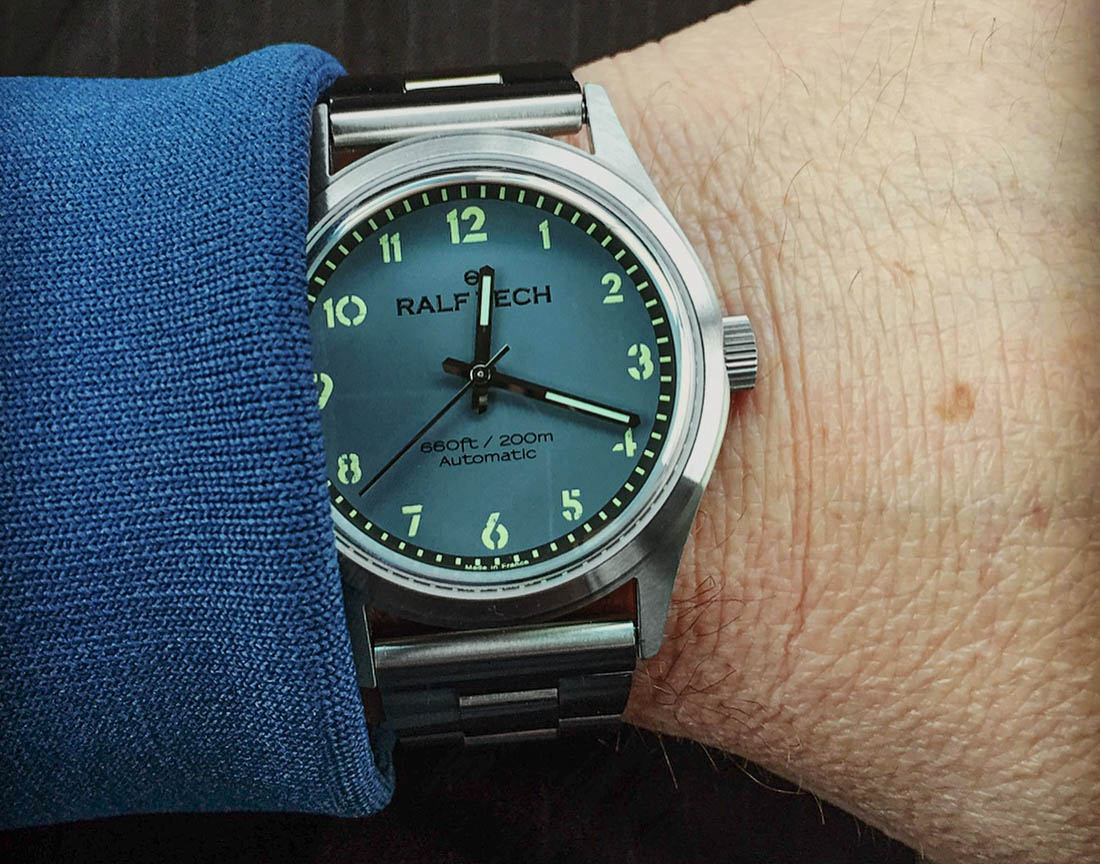 In November of 2017, the monthly giveaway watch on aBlogtoWatch was a Ralf Tech Académie Automatic Ranger. The winner was James H. from Norton, Massachusetts, USA and after enjoying his new timepiece (retail price $1,780), he has given a watch winner review for us to share with you – the aBlogtoWatch audience. Thanks to James and all the other watch winners who share their experiences with the world. Here is James’ review:

If thoughts of an island or jungle expedition come to mind when hearing Académie Ranger, well you wouldn’t be alone. Possibly a remote beach would also come to mind given the company’s aquatic abilities and the Ralf Tech Académie Ranger’s 200m of water resistance. Ralf Tech is a privately owned company operating out of Paris, France. Creative direction comes from owner Frank Huyghe and the company’s ownership today consists of Mr. Huyghe, one “silent” partner, and a third owner of the Swiss Atelier in Le Locle. Ralf Tech was established in 1998 and provided scuba and tactical wet gear to the French, British, and Swiss military along with sales to the public and professional divers. 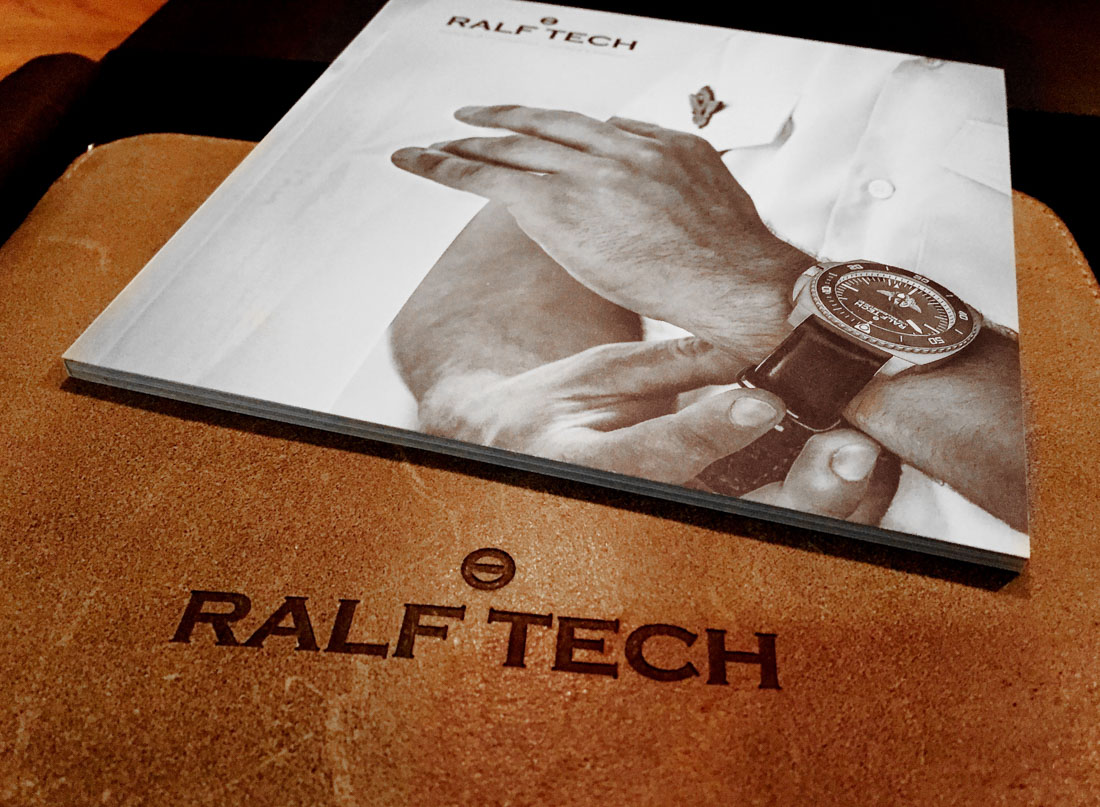 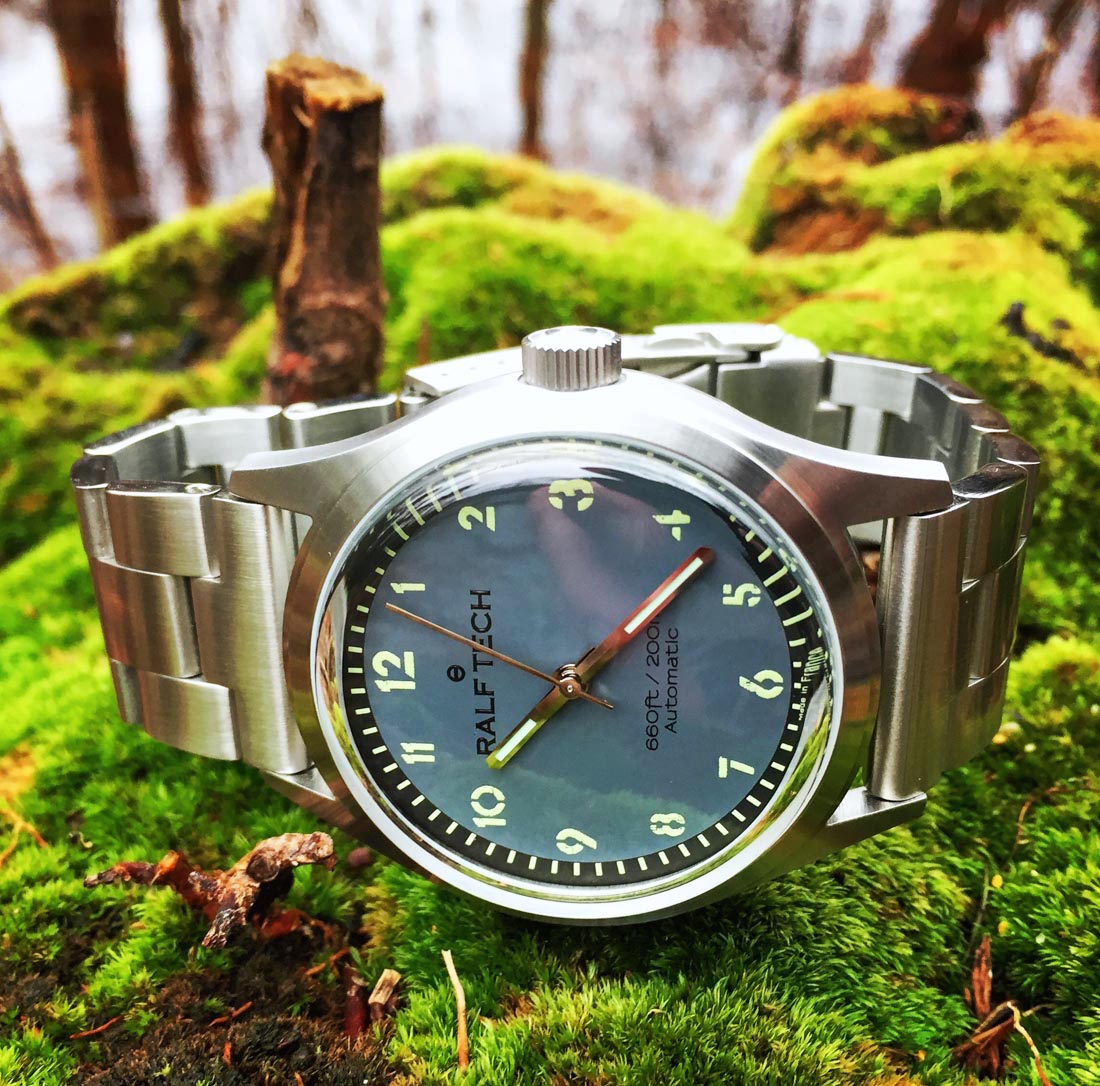 Flash forward, Ralf Tech the watch company was born in 2005 after successfully sponsoring record-setting French diver Pascal Bernabe with a Ralf Tech timepiece (Prototype WR-1). To this day, he still holds the record for the deepest unassisted dive for 10 hours at 330 meters below the ocean surface. In 2007 Ralf Tech aquatic gear was sold off along with Mr. Huyghe’s patents, yet he retained ownership of the name Ralf Tech and the early DNA to fabricate a respectable dive watch. 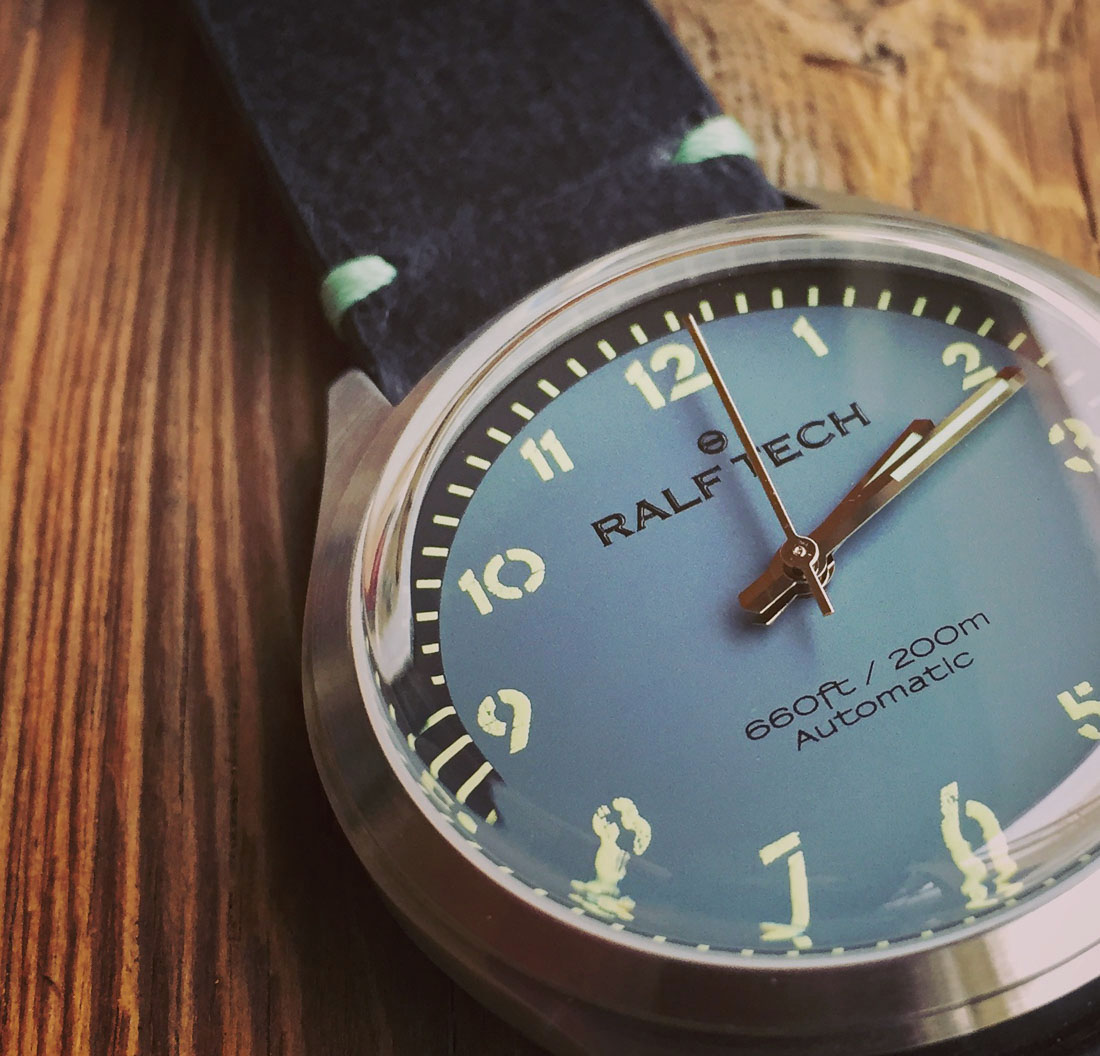 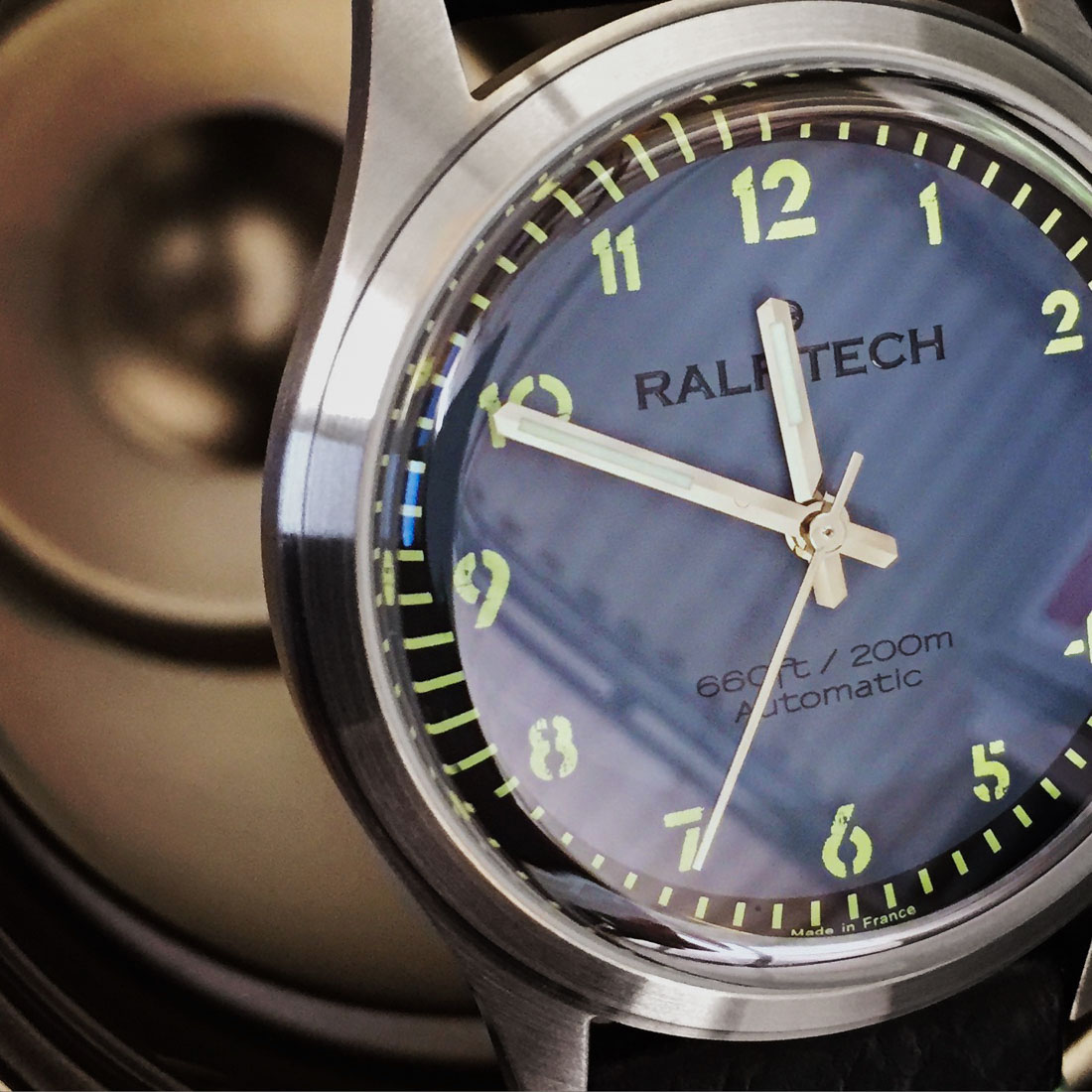 Frank himself has been a watch collector since he was twelve or thirteen years of age and was gracious enough to make himself available by telephone and email to contribute to this article. The company’s direction is unlike many established Swiss brands and recent boutique brands, in that the focus has been to tell the story of Ralf Tech in real time through the owners of its timepieces. The brand is also devoid of a marketing department by choice. Rather, the Ralf Tech timepiece line is intended for those who enjoy horology and its intended use as more than a piece of jewelry or an accessory. 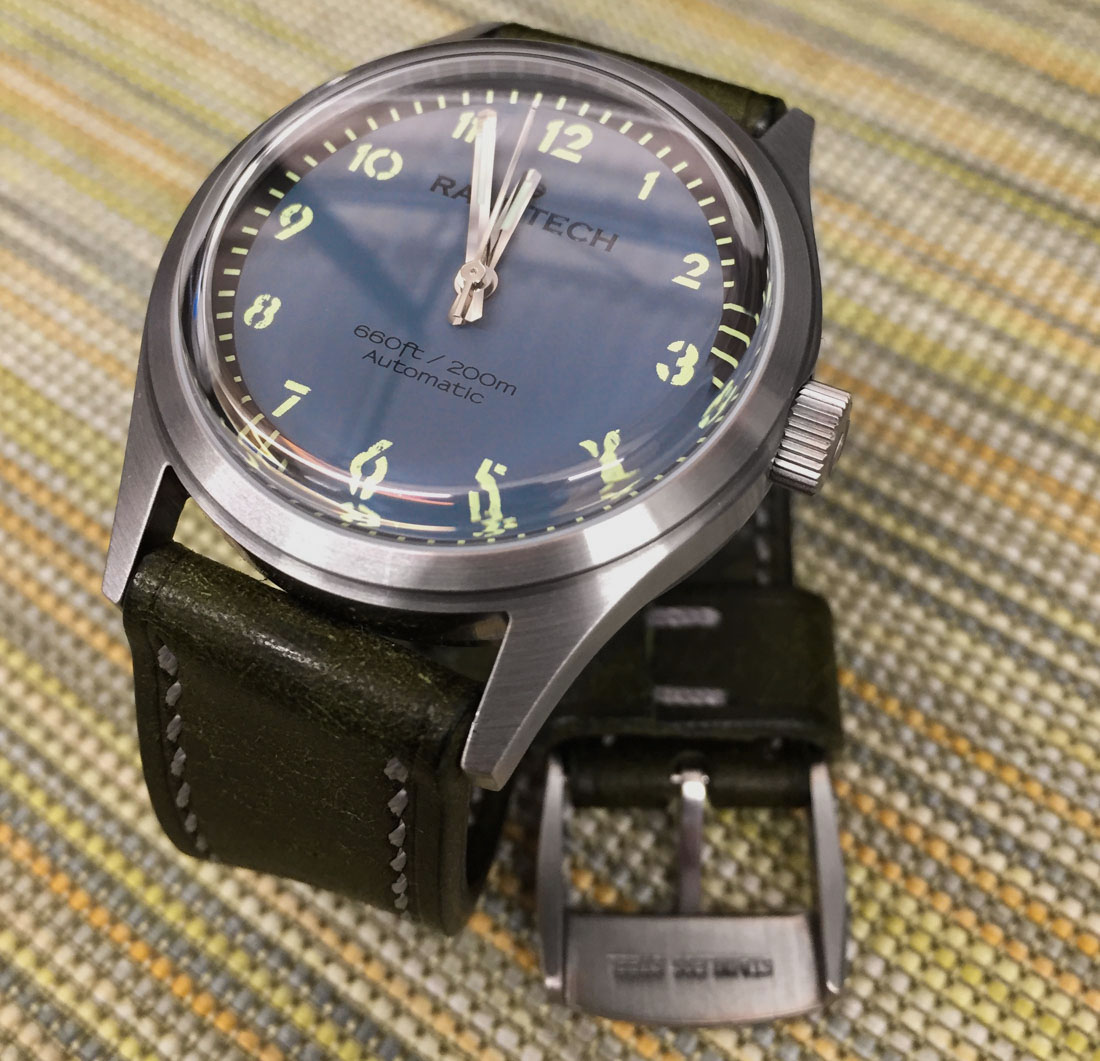 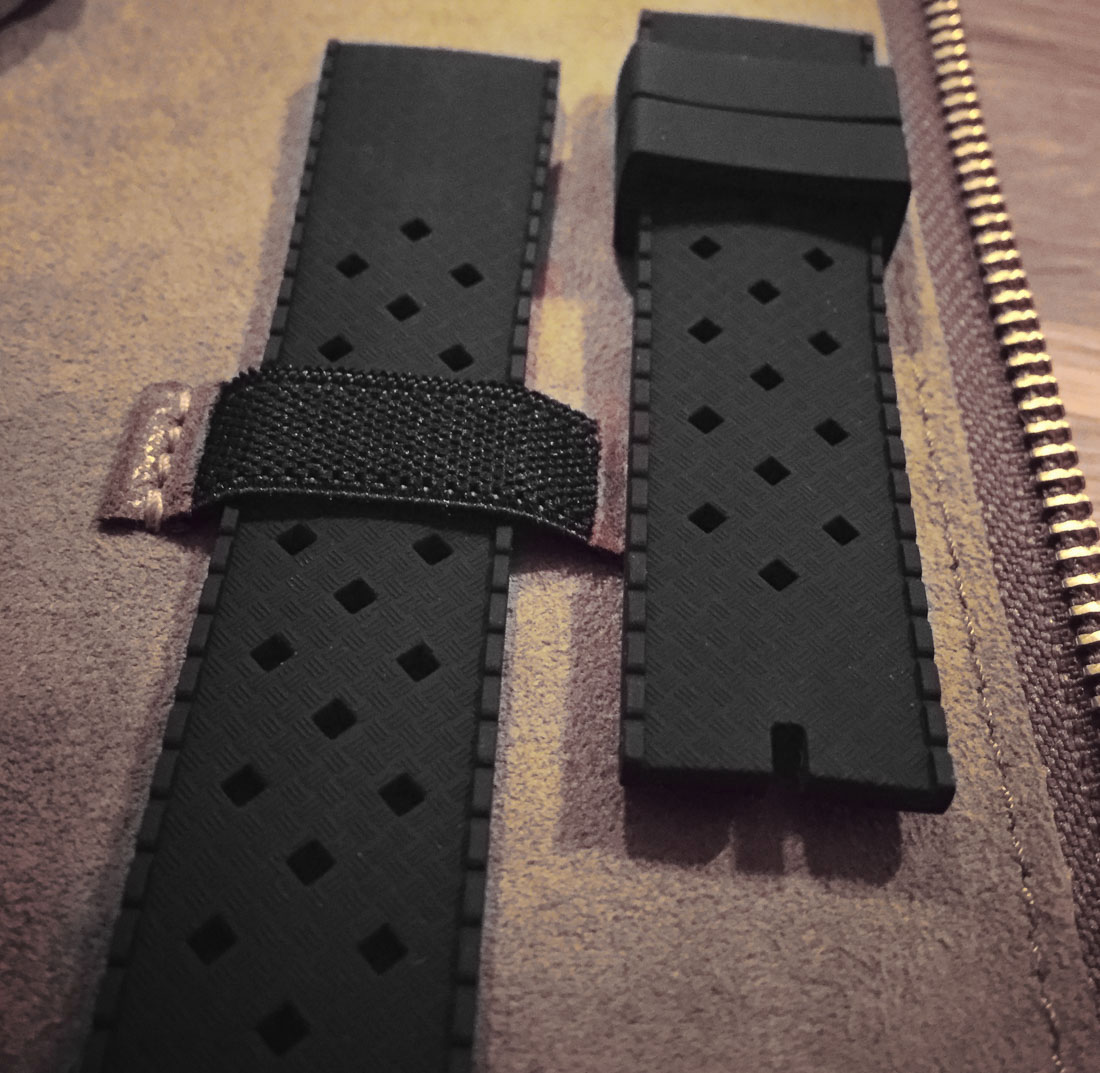 Introductions aside, I wished to give the watch community a fair look at the new Académie Ranger by faithfully wearing this watch for an entire month.

The Ralf Tech Académie Ranger specifications are as follows; case length is 50mm, case width is 41mm, and thickness is 14mm due to the fantastic boxed sapphire crystal which gives off just the right amount of distortion while retaining ideal visibility at any angle. The lug width is 22mm and the strap tapers to 20mm at the provided signed and screw in Ralf Tech buckle. Speaking of which, you are provided with two straps, one crafted by Bouveret Atelier in the French Jura mountains, and a flexible rubber tropic band, along with a strap changing tool and metallic warranty card all inside the beautifully presented zippered leather case crafted by a supplier in Switzerland. LUCRIN (the supplier) also specializes in tailor-made leather items for Audemars Piguet. 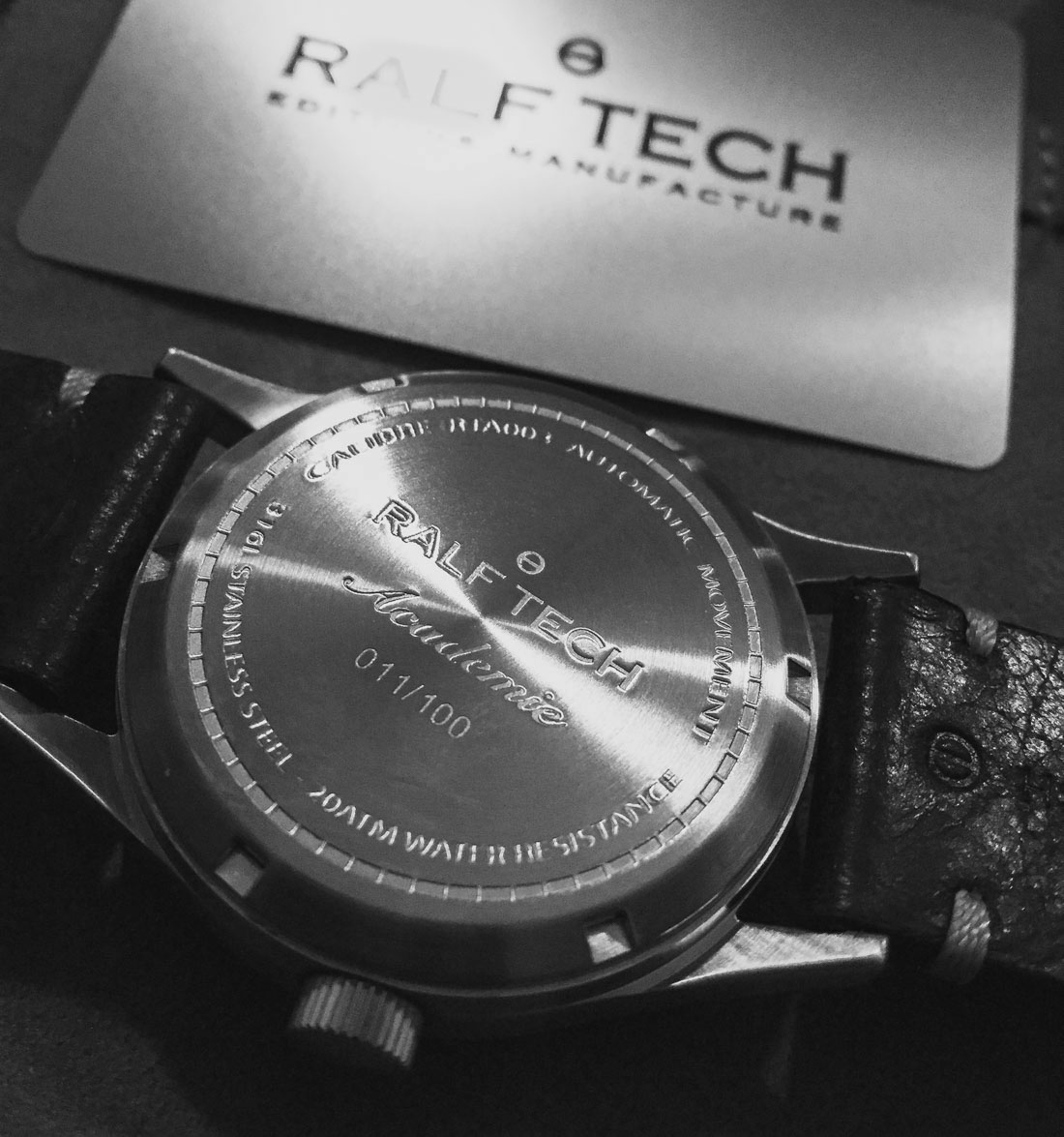 The Ranger bears the Made in France distinction – the case, and dial are crafted in Switzerland, while the hands are made in France and so are the straps as noted earlier. The NH36 movement is derived from Seiko Japan and allows for hand-winding and hacking. Some may view this as a far less exotic choice given the origin and sum of parts for the Ralf Tech Ranger, but the NH36 has proven itself to be a durable and reliable movement. I would have liked to see a date delete, as you have today with the Rolex Explorer I and Tudor Ranger. Still, during a month’s service this movement proved to be reliable and provided accurate timekeeping within movement specifications. 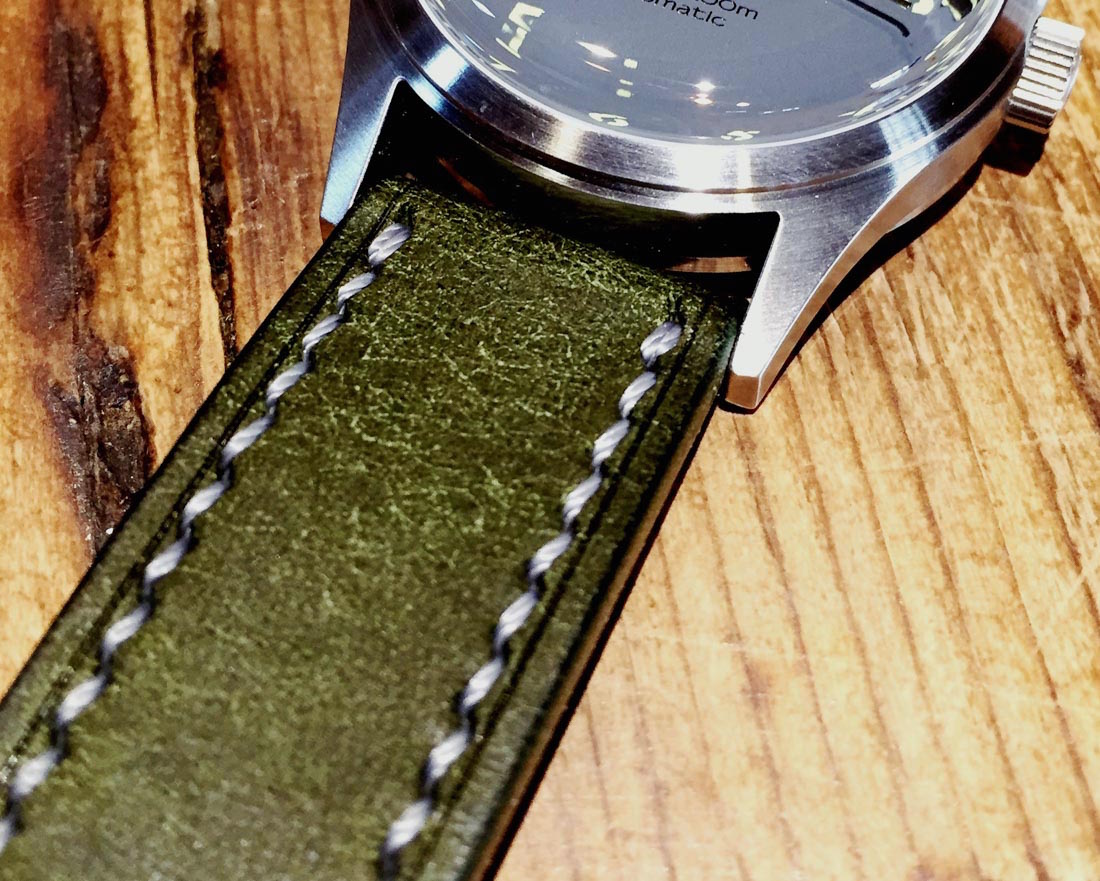 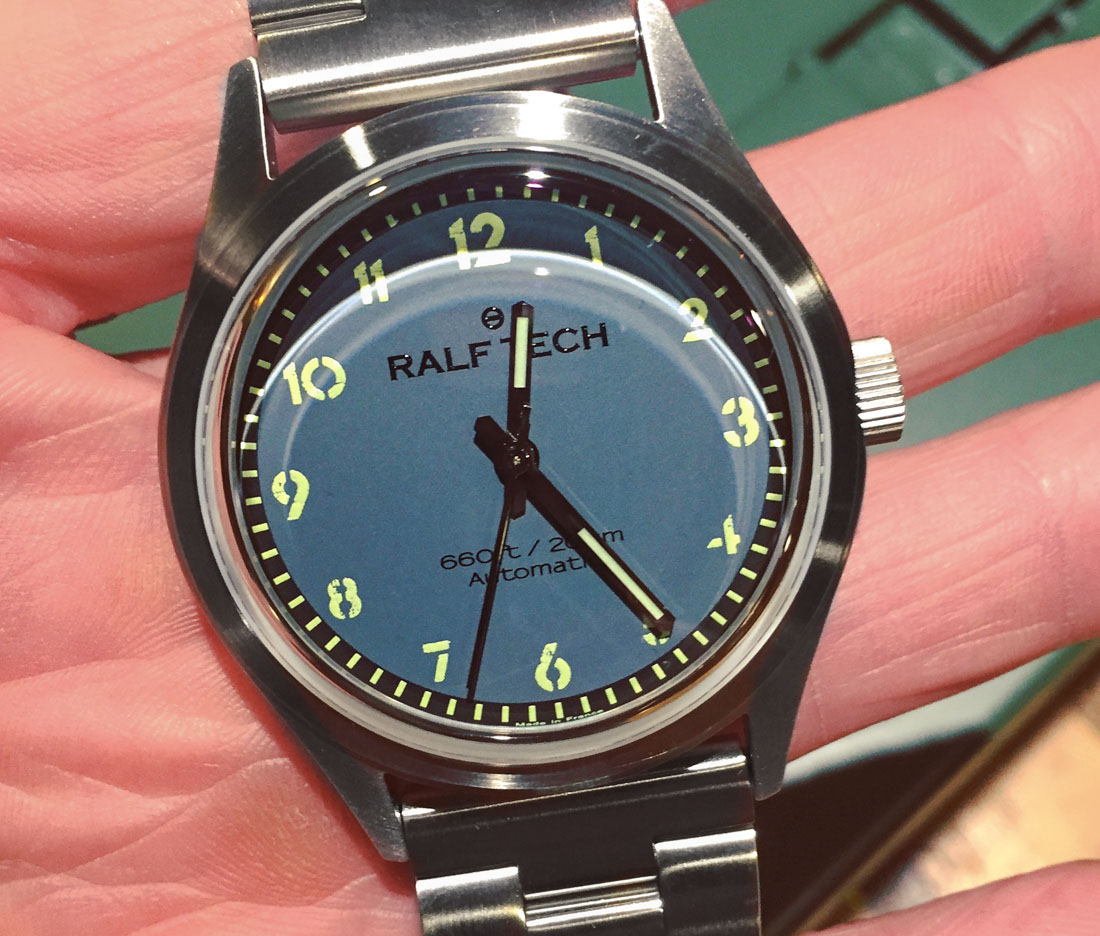 At the end of the day, the goal was to realize a watch that was wearable, durable and had a 1960s vibe with modern parts. I feel all three were achieved. On the wrist, comfort is excellent with a case size of 41mm fitting most wrists, and in fact, the design feels and looks very much like the Tudor Ranger I previously owned. This led me to some additional strap choices you see in my pictures as it’s a timepiece that asks for many strap changes to keep things fresh and interesting for the owner. I matched the Ranger with an earthy green Pueblo leather strap crafted by Will DePass of Buzzard Brain Leather, and what I felt suited the watch’s character – a brushed straight end oyster bracelet from Strapcode. 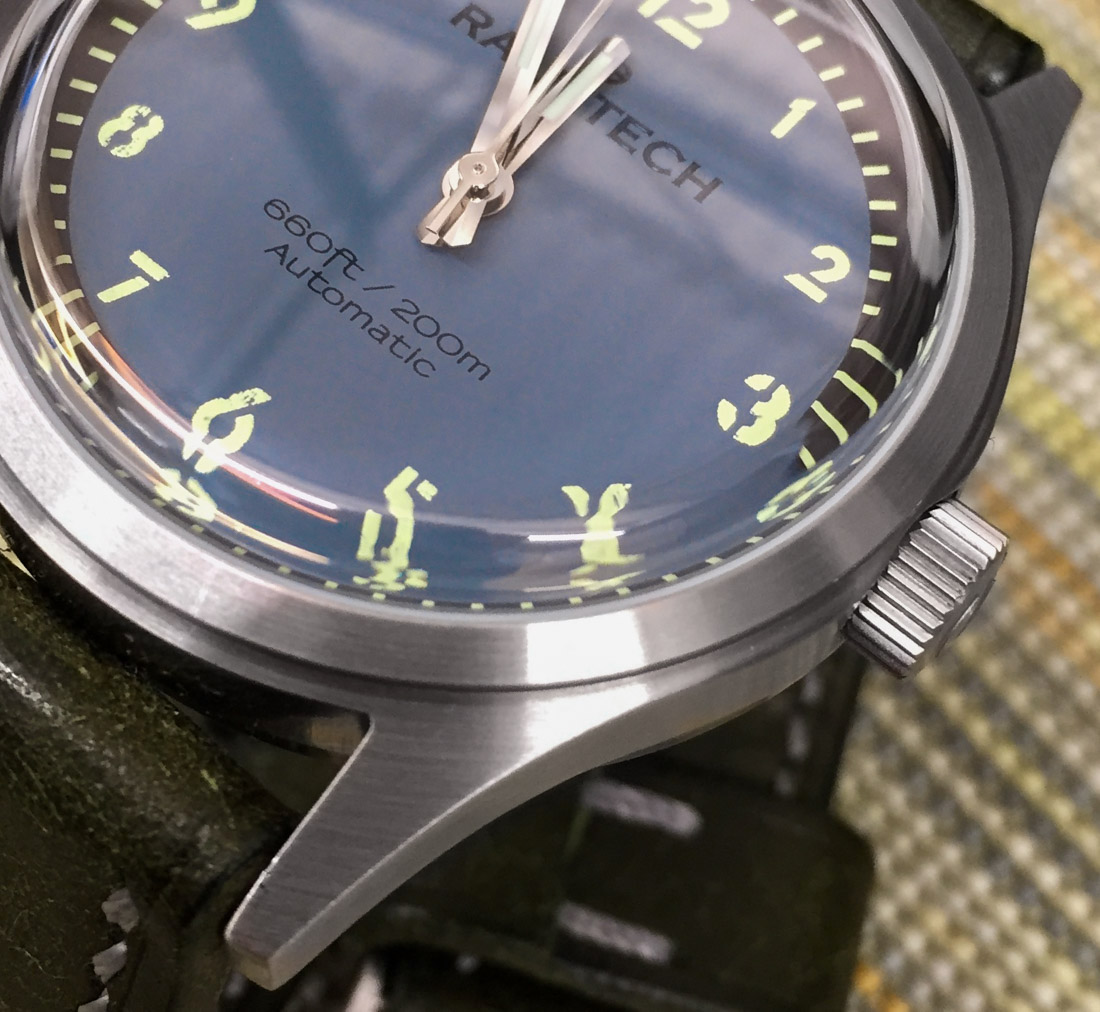 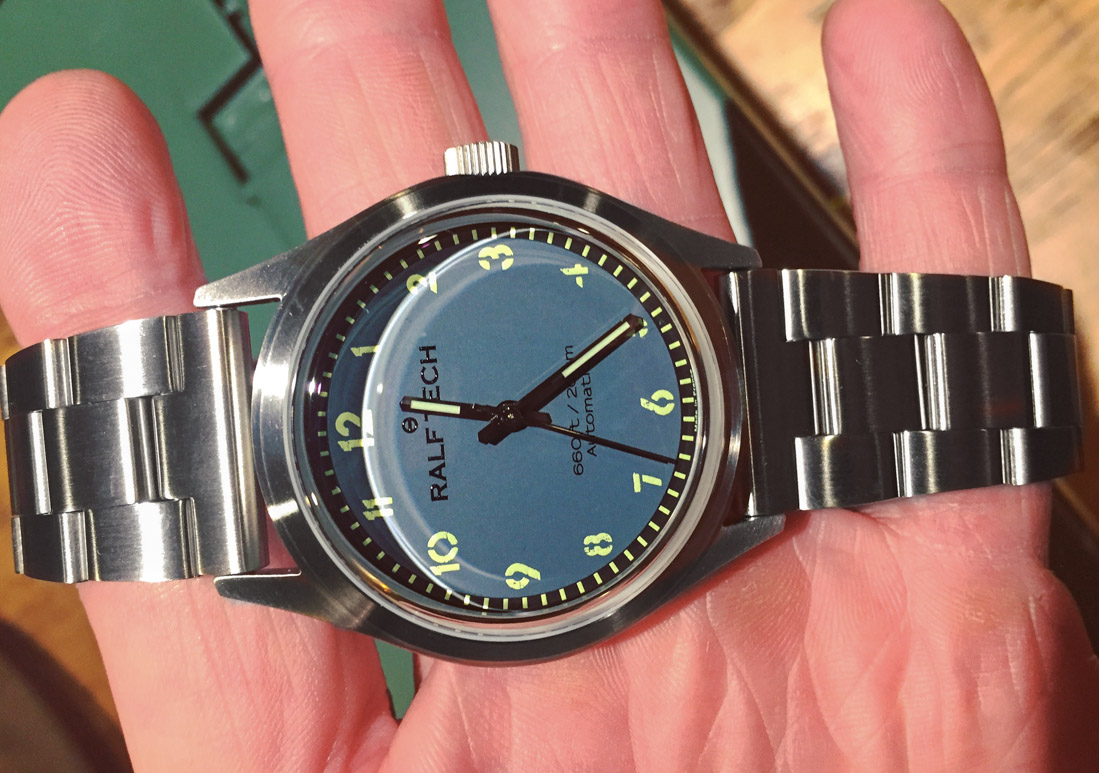 For the Académie line in 2018 there will be two finely finished signed buckles included with each purchase going forward. This will alleviate having to swap one buckle from the included leather band for the rubber strap. We will be treated to some new dial designs, such as a red volcanic dial with applied markers, a mist green Tundra dial with applied markers, and others variations. Be on the lookout for a Milanese bracelet option, and additional flannel straps. 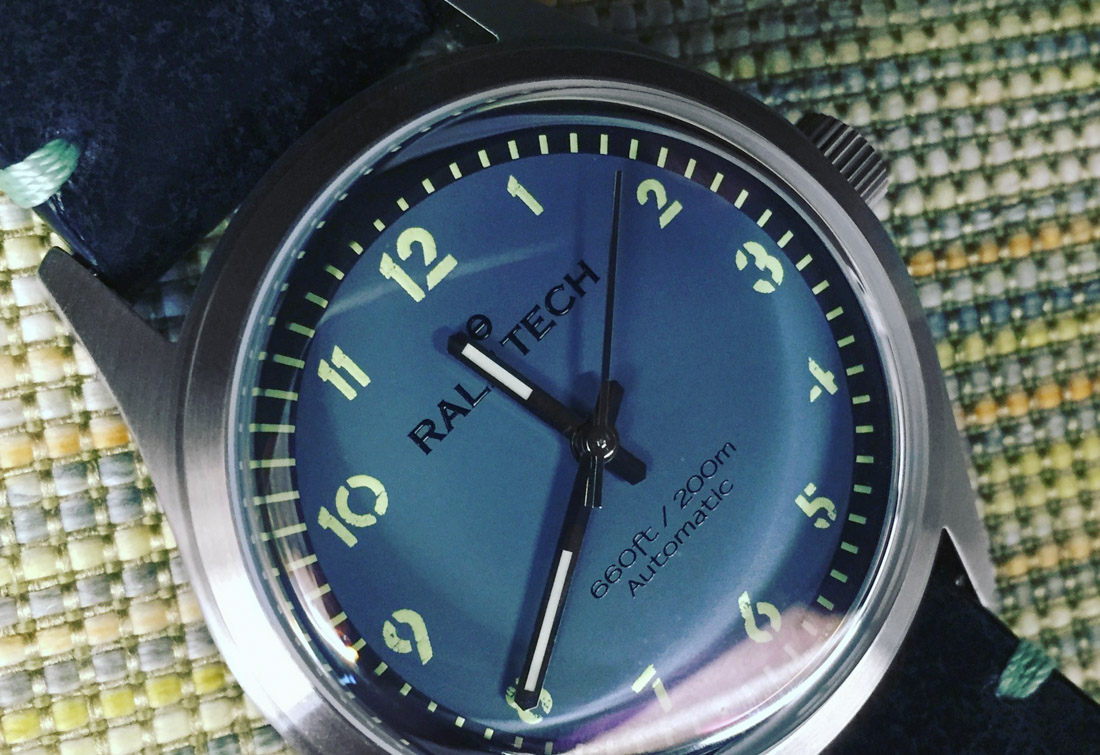 In closing, the Ralf Tech Académie Automatic Ranger has easily become a part of my daily wardrobe, and what will prove to be the perfect travel companion for many more wrist journeys and exotic destinations. I am very grateful for the opportunity to own this watch. MANY THANKS to aBlogtoWatch & Ralf Tech. ralftech.com