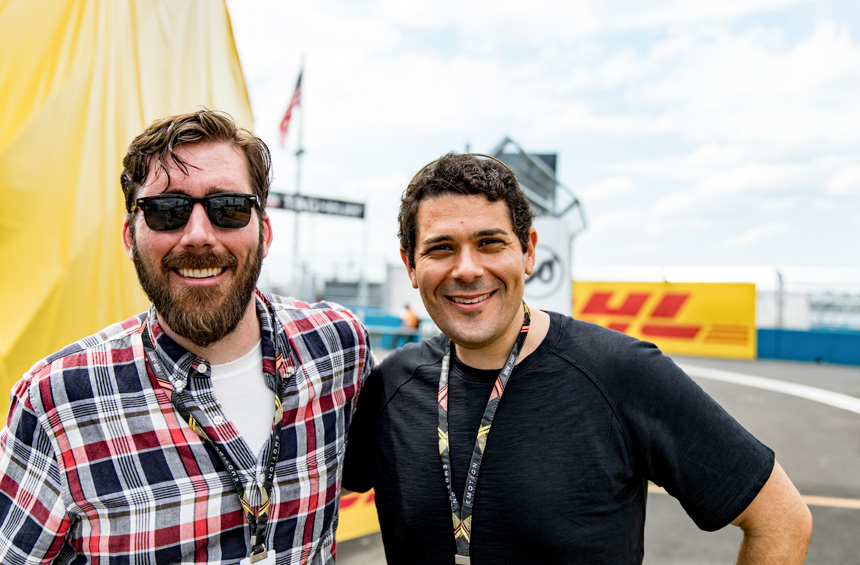 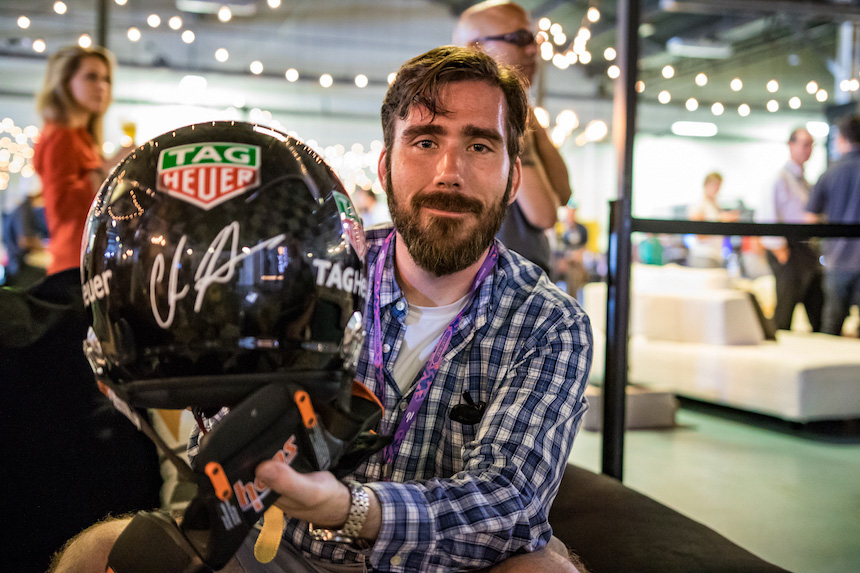 In December of 2016, the monthly giveaway on aBlogtoWatch was for a VIP Formula E ePrix experience in New York with TAG Heuer. The winner was John F. and after enjoying his VIP experience, he has given us a first hand account for us to share with you – the aBlogtoWatch audience. Thanks to John and all the other winners who share their giveaway experiences with the world. Here is John’s story:

On some level, I didn’t seriously process that the trip was going to happen until a day or so before I got on the plane. In December 2016, I entered aBlogtoWatch’s giveaway for a trip to New York in July to see the Qualcomm New York City ePrix as a VIP guest of TAG Heuer. I did not win at that point, and I did not expect to — I’d entered many of aBlogtoWatch’s monthly giveaways, but I always thought of those entries as inconsequential larks, fuel for idle fantasies of winning an interesting timepiece. This contest was especially exciting, but I had no illusions about the odds. So, when the site announced another person as the winner, I just took it to be reality kicking in. 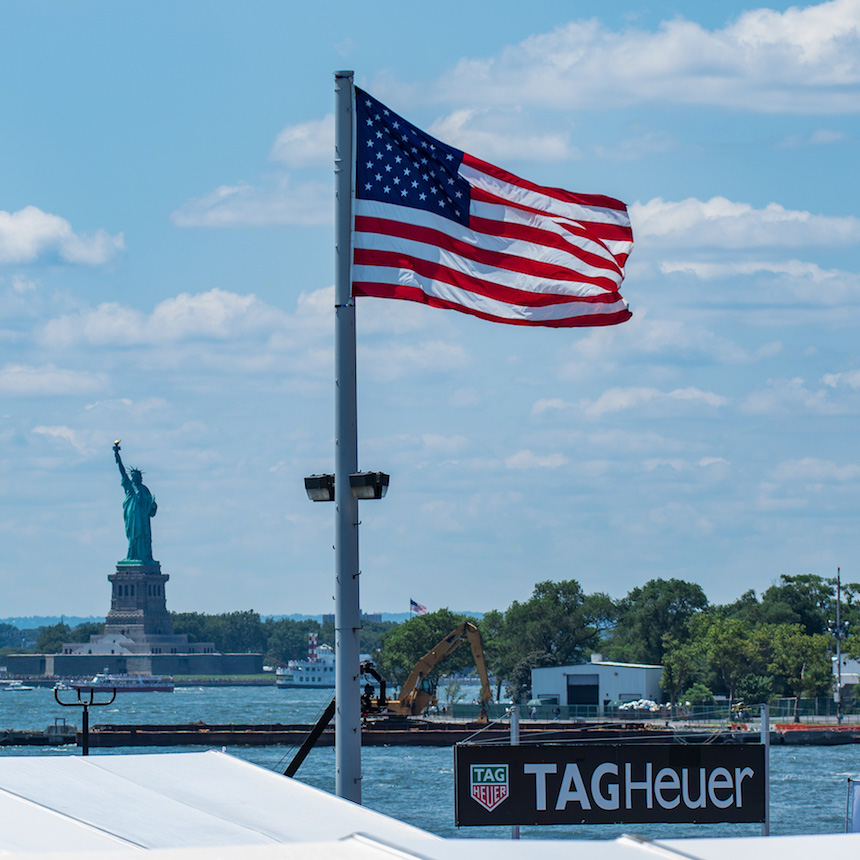 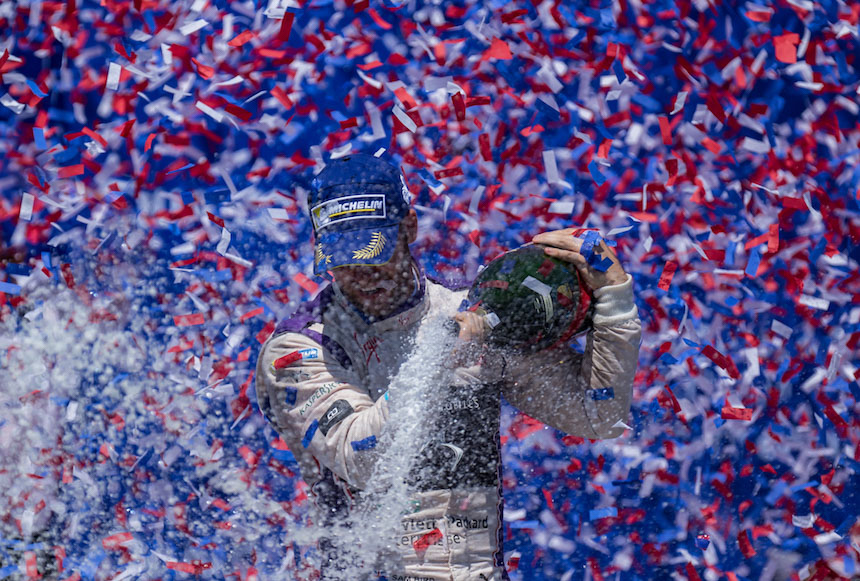 A few months later, I got an email from aBlogtoWatch informing me that the original winner couldn’t make it and inviting me to step in as an alternate. I agreed, but the sudden reversal of fortune made the prospect of actually taking the trip all the more surreal. And “VIP” can be a very flexible term; it could mean anything from a slightly easier check-in process at the race to an audience with the Pope. So even though I kept in touch about travel plans in the months before the trip, and I received a detailed itinerary a few days before the flight, I resolved not to think too much about the details or develop set expectations. I tried to stick to a mentality of taking the trip as it came. 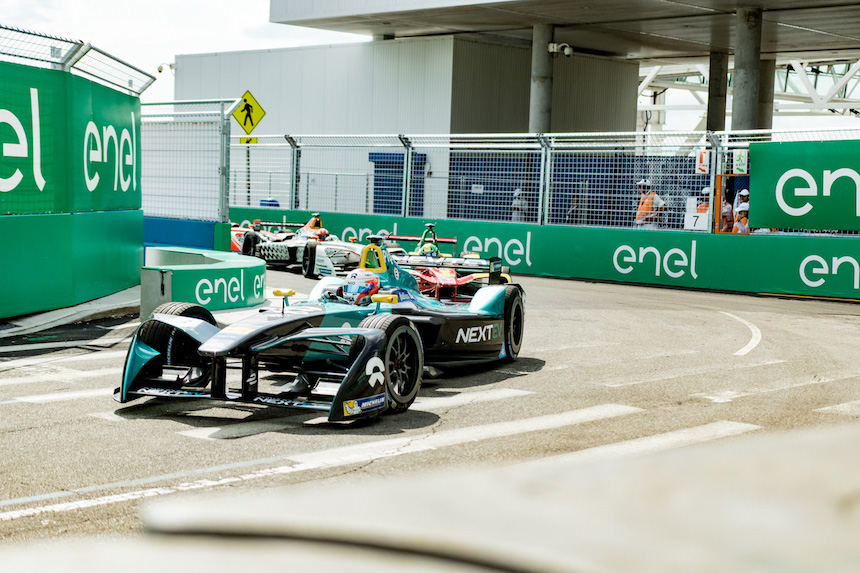 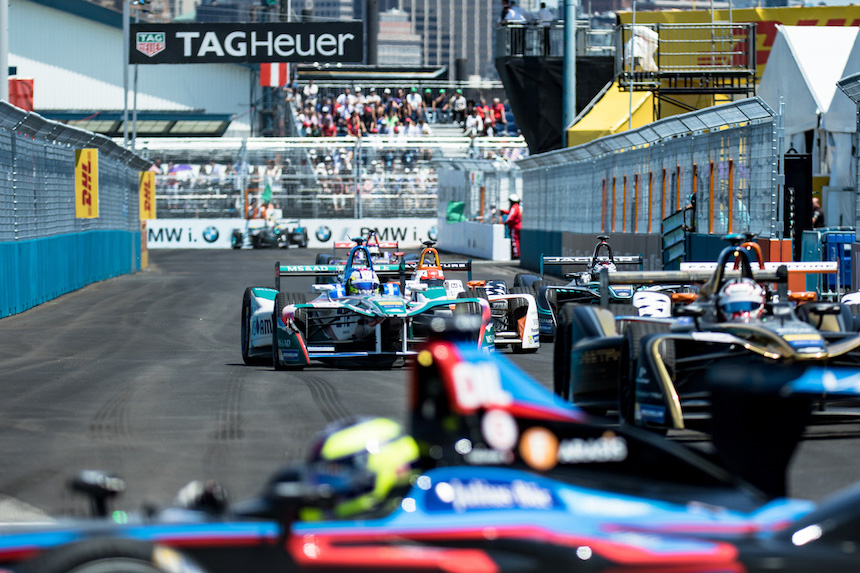 It turned out to be everything I could have hoped for in terms of the racing and the accommodations. TAG Heuer is a founding partner of Formula E, the official timekeeper of the event, and its official watch. TAG would share with me all of the access that came with that relationship, and extend every generosity and hospitality they could to make the trip as fun and comfortable as possible. I would, moreover, get to spend most of the weekend hanging out with aBlogtoWatch’s own Ariel Adams, making the weekend a unique horological experience as well as a sporting one. 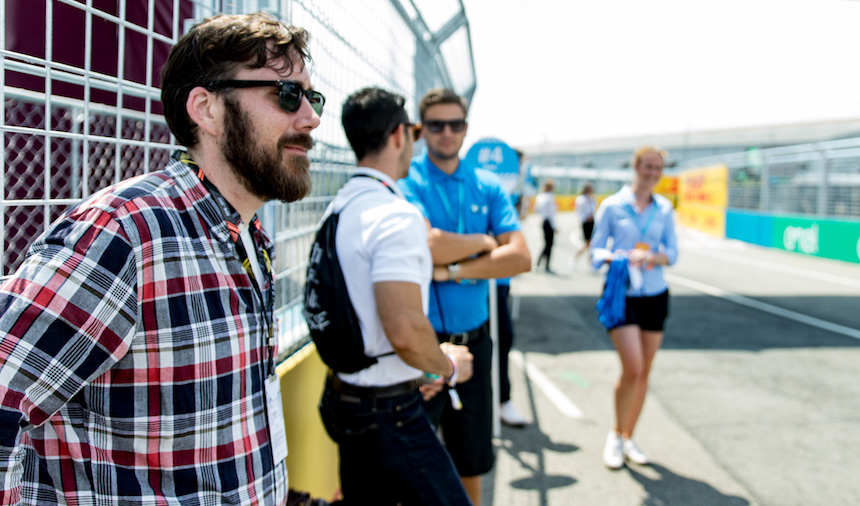 I flew into LaGuardia Airport on the afternoon of the fourteenth, where a car was waiting to take me to the Beekman Hotel in lower Manhattan. The flight was first class, the car was a Cadillac, and the hotel was five-star. It was clear my hosts were sincere in their commitment to making the trip as comfortable as possible.

After a couple hours decompressing in the room I went downstairs to meet Ariel Adams and John Kim, a photographer, in the lobby. We got acquainted and went downtown for dinner and drinks with the owners and staff of TrueFacet, an online pre-owned watch marketplace. 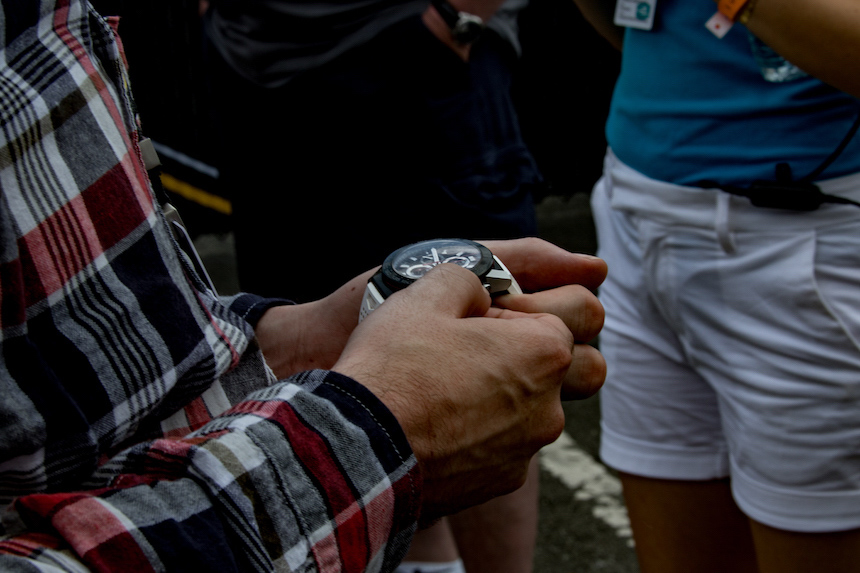 This was the beginning of a special kind of access in itself. I’m interested in electric cars, especially high-performance ones, but I’m a watch person — I found out about the Formula E experience giveaway because I read aBlogtoWatch, not vice-versa. I don’t have the funds to collect anything too high end, nor to collect too many pieces period, and I became interested in Ariel’s site because of its breadth. I could read relevant consumer advice about the affordable Midos or Certina dive watches I might actually buy someday alongside evaluations of five- or six-figure pieces, and all of them would be evaluated on their own terms, as members of a diverse but unified community. Similarly, I could find discussions of all aspects and levels of the watch industry. I could, in other words, have an access to a watch world far beyond whatever I happened to actually own or see firsthand. 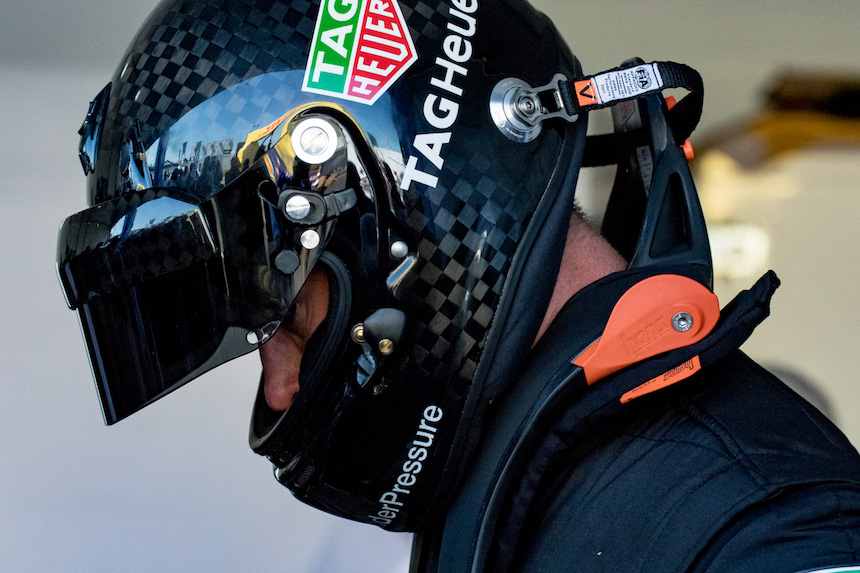 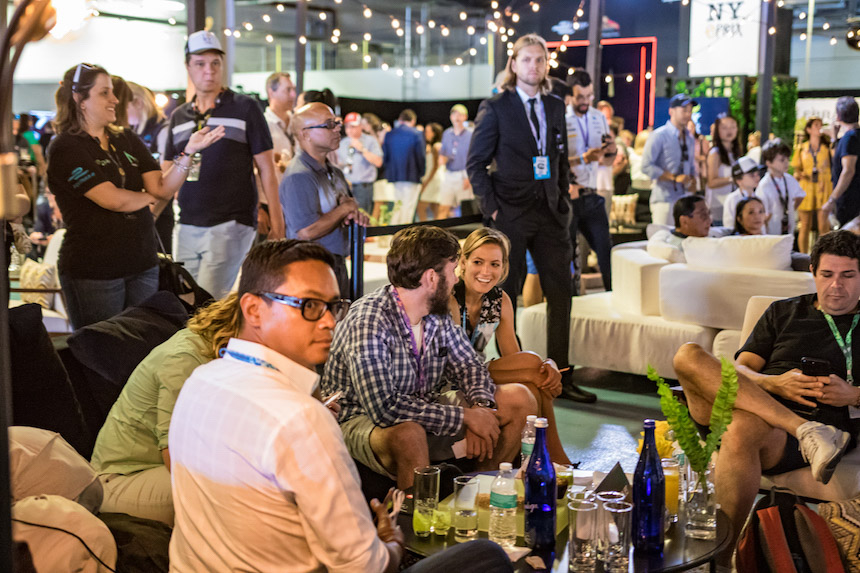 Beginning with meeting the folks at TrueFacet, the entire trip had a similar vibe except it was live. Certainly, the pieces and the conversation drifted towards (what was for me) the high end of the market — I was, after all, sojourning not just among watch people, but among professional watch people. But the conversations weren’t about conspicuous consumption, brand cache, or even business in a strict financial sense. It was about unbridled enthusiasm for horology — shoptalk of watch movements, new trends or designs, and industry news. This would hold true throughout the weekend, as I met numerous TAG representatives, Tim Mosso — who I would hang out with for an embarrassingly long time before I realized he was the man behind WatchUWant.com’s YouTube videos (I was accustomed to just seeing his hands) — and countless others who came and went too quickly for me to fully process but who Ariel clearly knew well. 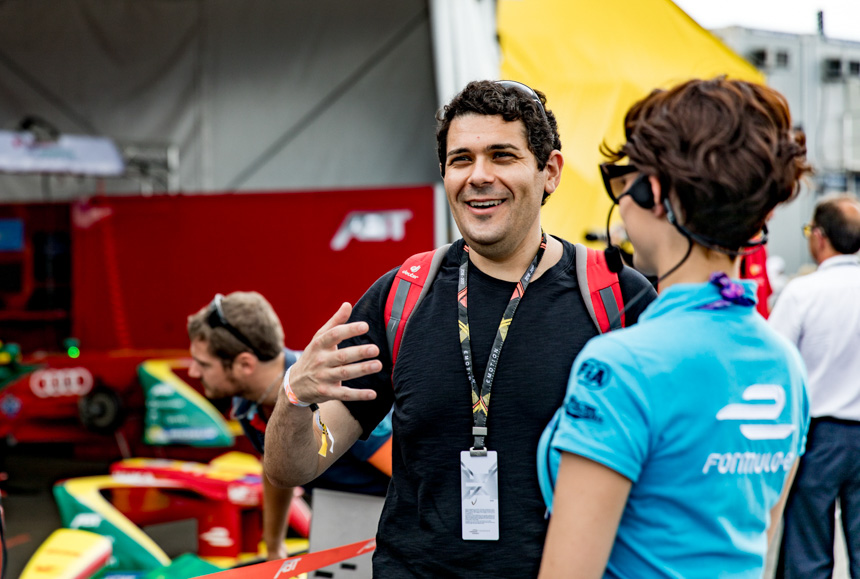 There was, incidentally, no better guide in this world than Ariel. He can see a cheap quartz watch and extemporaneously explain that brand’s plans to use a new technology to corner the under $100 market in one moment, then recognize a very obscure $40,000 vintage luxury piece on a passerby’s wrist and explain that model’s unique history on the spot in the next. Both of those are literal examples. 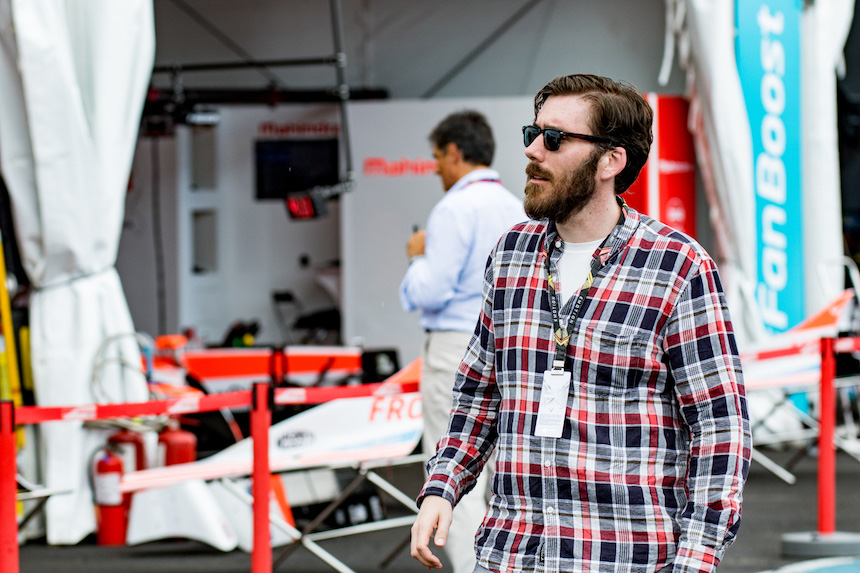 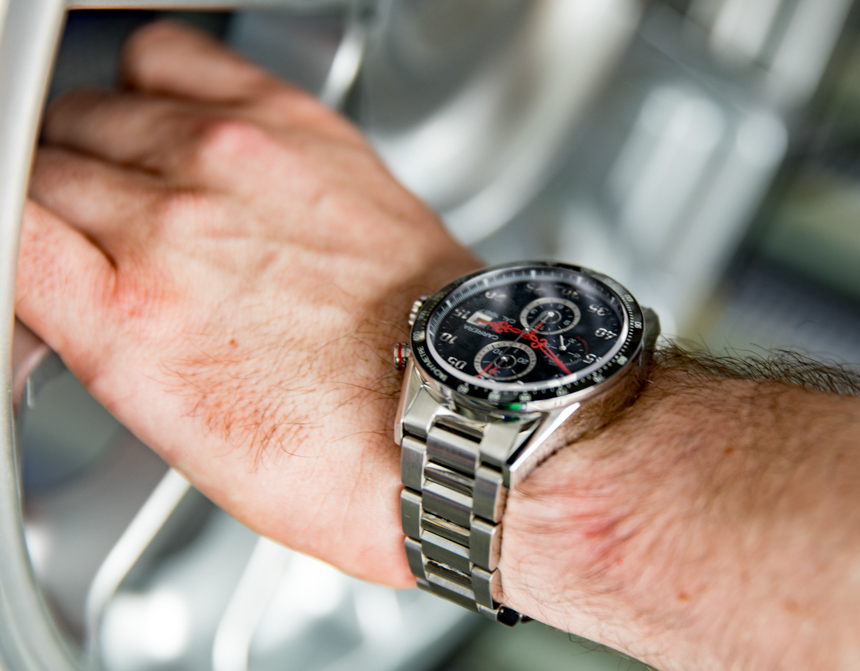 On that first night, he also saved me from an epic gaffe: my chosen watch for the weekend was a digital Timex Expedition with a Velcro strap. I’m actually very fond of that watch — it’s a tremendously comfortable, functional piece that is very loveable in its way. But I chose it for this trip because I don’t happen to own a TAG and I thought under the circumstances the polite thing was to wear something so patently non-luxurious it couldn’t be taken for a competitor. Foreseeing the problem with my plan almost immediately, Ariel insisted that I borrow the very watch off his wrist — a limited edition Omega commemorating the 2016 Rio Olympics. I took him up on the very generous offer, but didn’t quite understand why he’d made it. 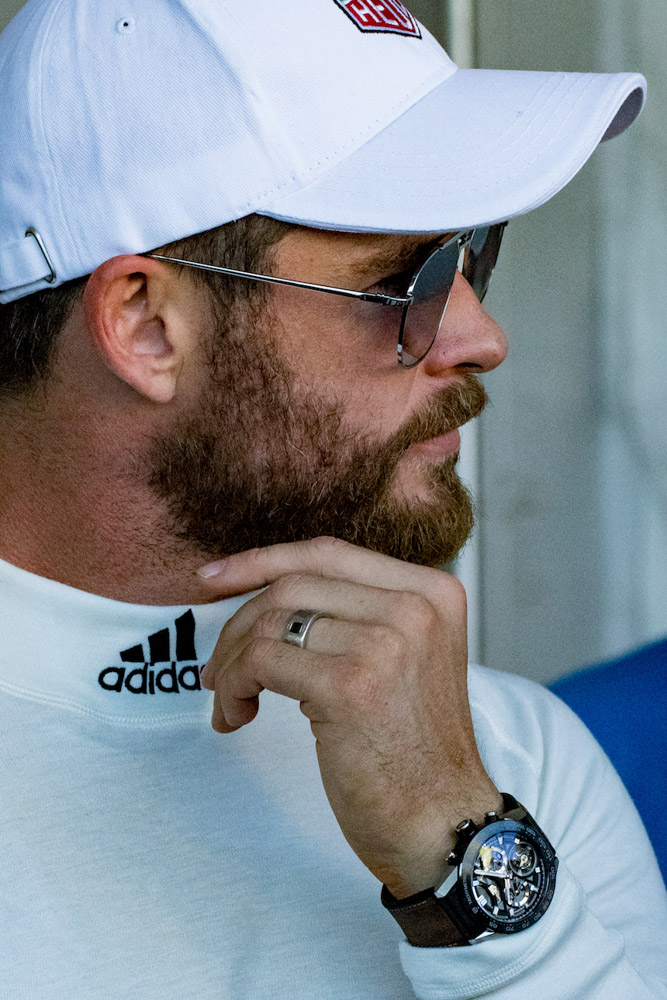 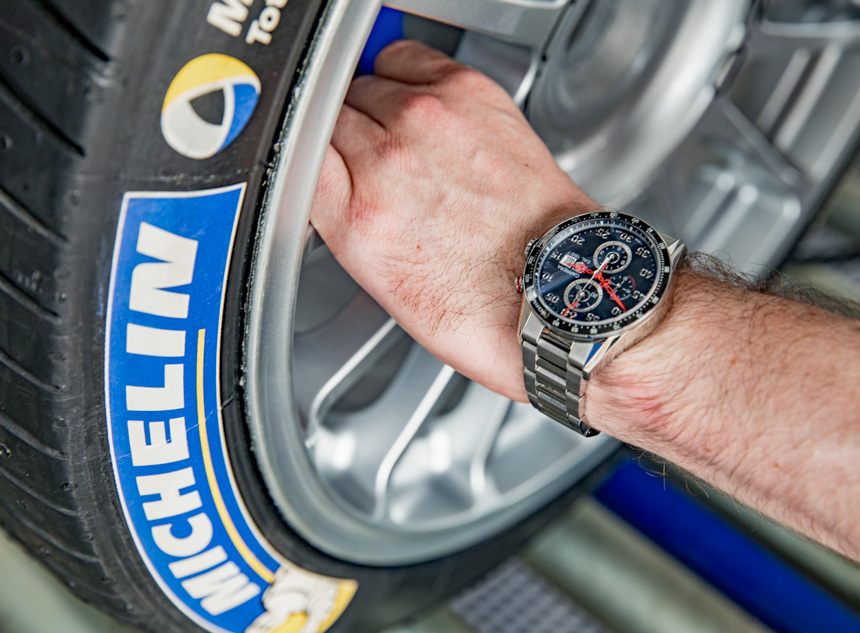 I would soon discover that one of the first questions virtually everyone I met on the trip could be counted on to ask was “what are you wearing today?” It was always a friendly question, not a judgmental one, but the awkwardness of repeatedly presenting an item as ludicrously out-of-place as a digital Timex for appraisal and discussion would’ve gotten old very fast. And given that I loved the chance to a see such a wide variety of interesting timepieces in action, it was nice to have one to show in turn, even if I did dutifully admit it was borrowed. Ariel, incidentally, was fine in those social exchanges even without his Omega. When he lent it to me straight off of one wrist, he had a limited edition Japanese TAG Carrera on the other. That in itself says something about the man’s passion for his field.

We all spent the evening chatting at a restaurant and bar on the roof of TrueFacet’s office building. Sitting there, looking out over the city with a glass of Japanese whiskey while chatting about watch topics great and small — from the need for order in the secondary market to what people thought about the news from the most recent Baselworld — was a very gentle immersion into the world where I would be spending the next few days. 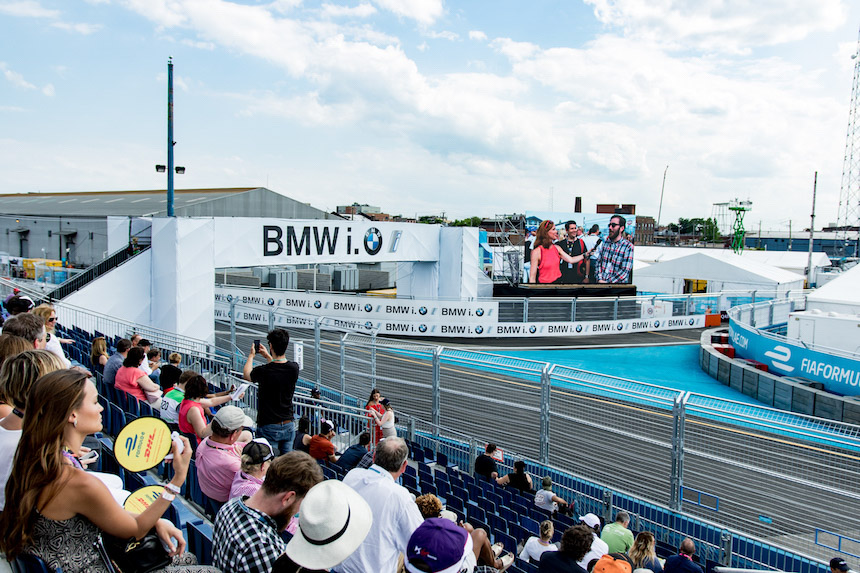 Ariel, John, and I gathered in the lobby around 9:30 in the morning to meet Ben, a TAG Heuer representative who would help see us through our first race day, ensure our access to the special events the company had arranged, and rather heroically keep us more-or-less on schedule despite our easy distractibility. We then made the short journey from lower Manhattan to the Brooklyn Cruise Terminal in Red Hook and got our first look at the race site. 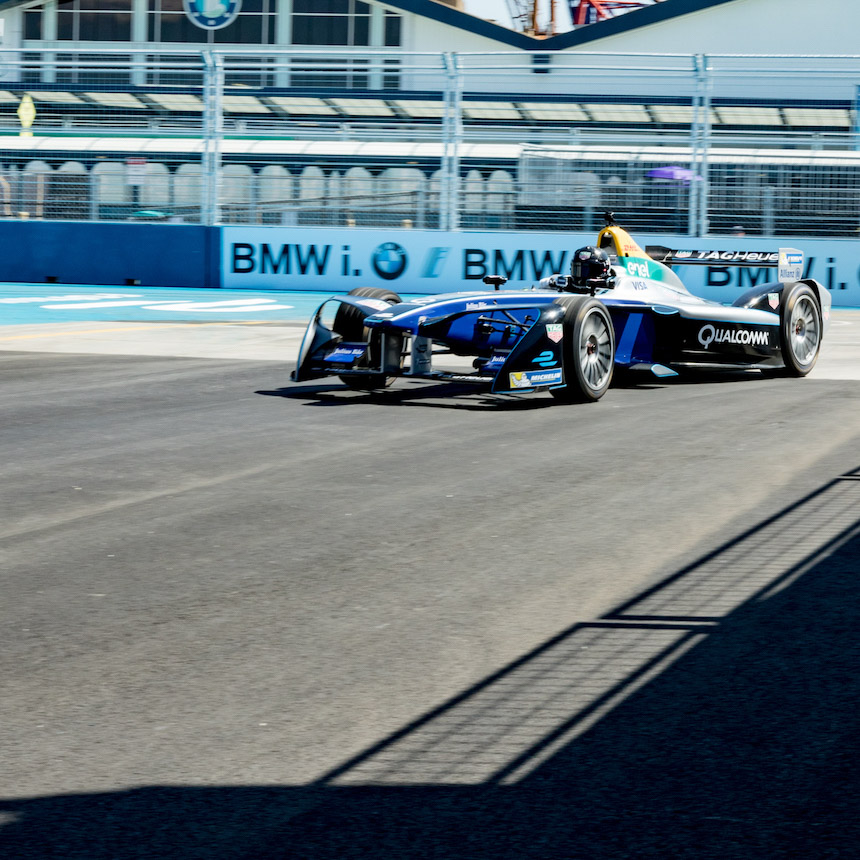 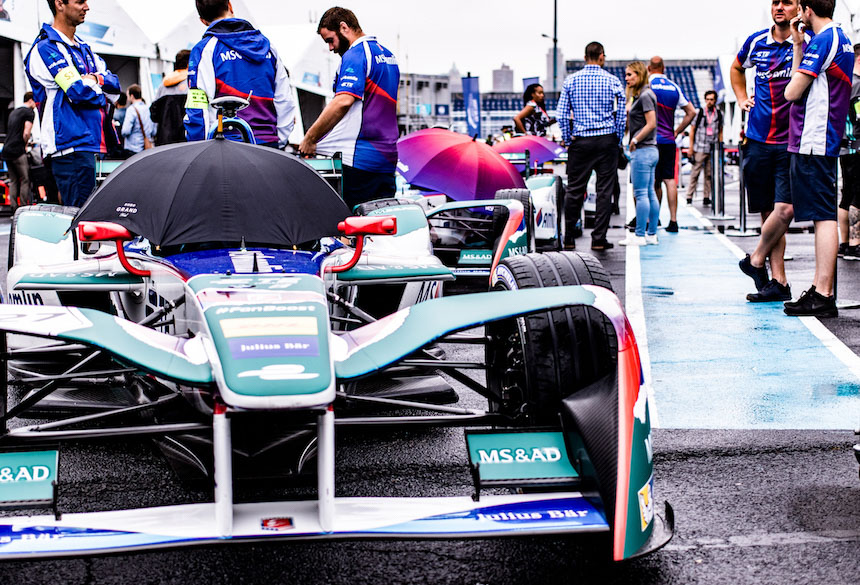 We had a good five or six hours before the beginning of the first race, but even that early, the entire event felt infused with grandeur and possibility. Formula E is a young sport. The weekend’s races, coming near the end of its third season, were only the 29th and 30th in its history. (For comparison: Formula 1 held twenty-one races in the 2016 season alone.) But one of the advantages of electric car races is that they can take place in cities much less disruptively than their internal combustion counterparts. The engines don’t make as much noise, so they don’t ruin life for miles around. The tracks are street circuits, not bespoke structures, so they can be laid out and taken down with comparative efficiency. And the tracks tend to be small, winding circuits to favor the performance strengths of the electric cars, so they can operate in relatively confined spaces. As a result, Formula E had been able to secure an event in New York where other major auto races like Formula 1 and NASCAR could not. It had already hit many of the world’s major capitals — London, Paris, and Beijing among them — and now, still so early in its existence, it was conquering New York as the first international motor race ever held in any of the five boroughs. 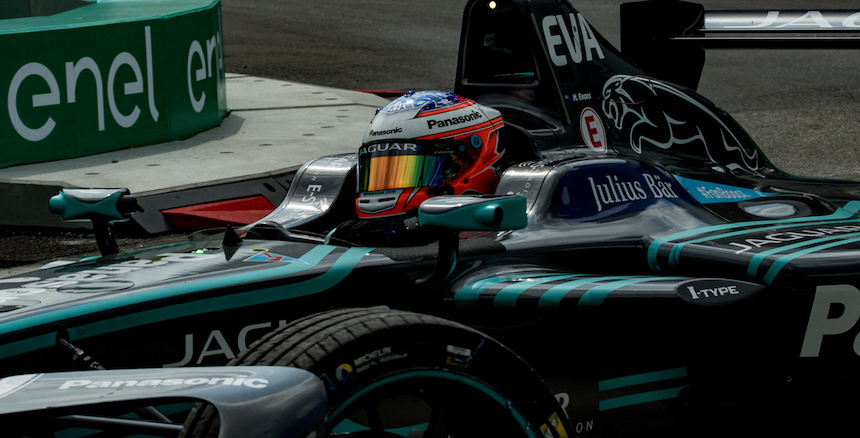 Both Formula E and the city were eager to play up that milestone, and it created the feeling that I was at a celebration as much as an event. The very fact that street racing was actually going to take place in New York City had an inherent excitement behind it. The temporary track and grandstands built onto the grounds, combined with the eVillage full of games and demos for race attendees, gave the site the tone of a grand pop-up carnival, a welcoming party for the race’s arrival. And in the background of the whole thing were postcard views of the Manhattan skyline across New York Harbor and the Statue of Liberty off in the distance. In terms of a location being used to create an impression, it was pretty much perfect. 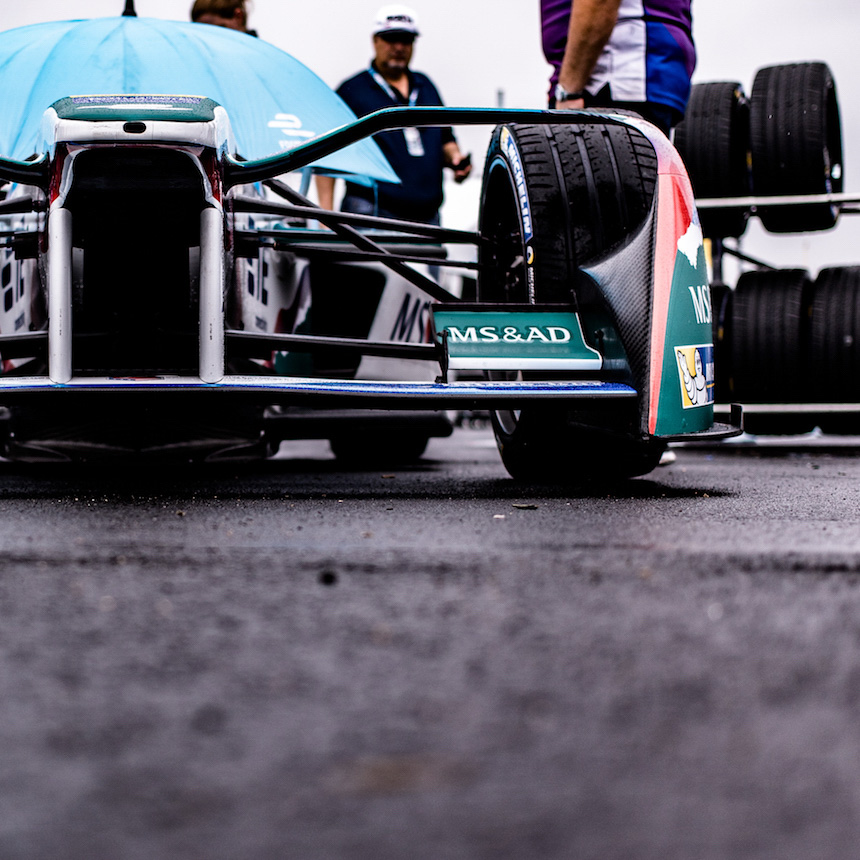 By the time we checked in, it was still a couple of hours before even the qualifying rounds started, so Ariel and I made our way to the EMOTION club while John went off to find more fruitful photographic material. (John would, for the rest of the weekend, pop in and out of contact, demonstrating an uncanny ability to be around when something worth photographing was happening, and disappearing to find action elsewhere when it wasn’t.)