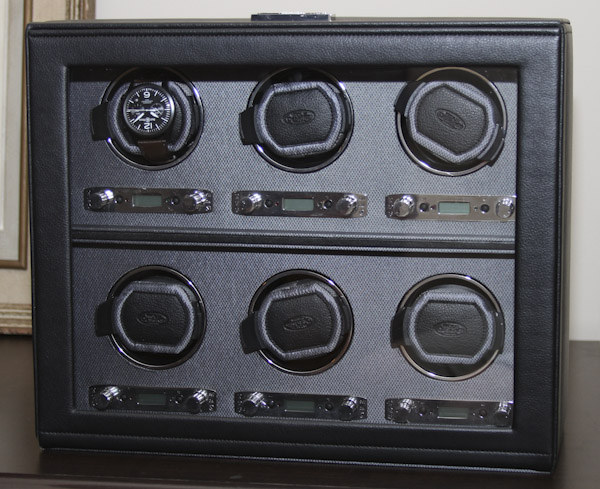 An interesting fact that I’ve come to learn is that many people (even quite a few watch loving people) have no idea what a watch winder is. It is one of those things that you can show people, in action, and they still don’t know what it is. I’ve actually had people come to my office and see a bunch of watches in winders on shelves and remark “oh really? You have to show them off like that?” Which I later learned (after some probing) was a misunderstanding thinking that a watch on a winder was some special way of displaying them in a fancy manner. I just can’t anticipate misunderstandings like that in advance.

It is possible that I take for granted knowing what a mechanical watch is, and that I know how it works. There isn’t a lot of sense required (in my opinion) to understand that a little weight in a watch movement winds it when you move your wrist around. Further, if you are not wearing the watch on your wrist, you can artificially create the movement necessary to keep that watch wound. I know, very simple stuff here but I have encountered plenty of people who simply aren’t familiar enough with automatic mechanical watches to know all this. The point is that the pool of people on this planet who know what an automatic mechanical watch is, is not super big. Among those people, the ones that know what a watch winder is, is even smaller. Therefore, I guess I have to keep telling people about watch winders, and why they might want one.

Reviewed today is a winder that has the capacity to keep six automatic watches running. I have reviewed winders in the past from such venerable brands such as Orbita and SwissKubik, and today I review one from Wolf Designs. Wolf Designs has a history in making watch and jewelry boxes which later included watch winders. Wolf Designs is continually improving their products and offering a range of relatively affordable and functional watch winders (among other things). Today I review their Viceroy 6 Piece Watch Winder. Plus, look below for a generous discount offer on any Wolf Designs watch winder for aBlogtoRead.com readers.

The Viceroy is part of their nicer collection of winders and comes in models that wind from one to eight watches. They are housed in padded black boxes that have a closing, clear acrylic front. According to Wolf Designs the boxes are put together by hand, and have a wooden frame. All it needs is a handle on the top and you could tote it around like a suitcase. The dimensions of the 6 Watch Winder units are 16.5”w x 6.25”d x 12.75”h. 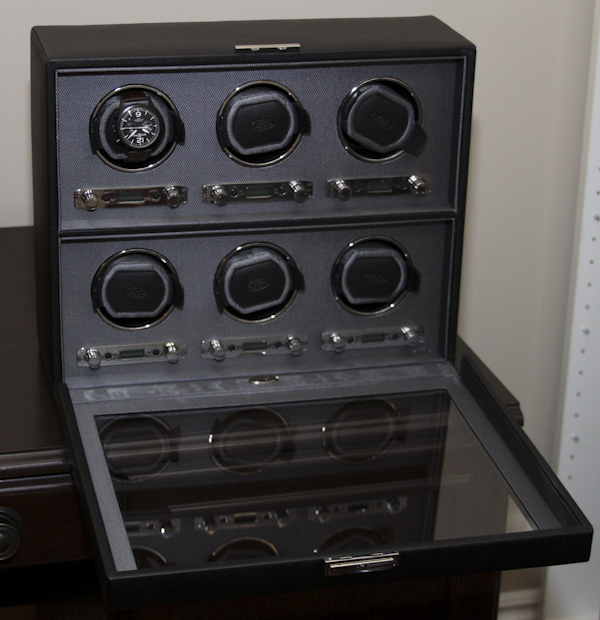 I like that the front portion opens and closes to protect from dust, but that you can also see the watches when the cover is closed. However, you’ll need to have the cover closed most of the time or it just lays flat and sticks out rather far. The unit is weighty enough, but you’ll still need to put a hand on it to secure it while pulling out the “cuffs” that hold the watches in place.

While the door of the winder box technically does lock, it is a very simple lock and not one that I would recommend for real security purposes. It is just sort of them to prevent it from accidentally opening and the most easily deterred thieves. The lock does however use a small key that Wold Designs provides. 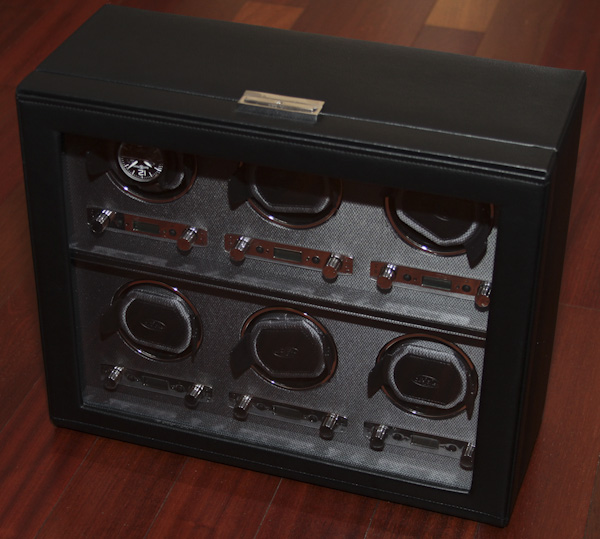 This unit is powered via an AC adapter – which plugs in via a removable cord in the back of the unit. There is an ongoing debate among watch winder makes as to whether long-life batteries or plug-in units are the best way to go. Some units even offer both. Space and convenience permitting I tend to feel more comfortable with the plugged-in units.

With space to keep six watches wound, this Viceroy unit contains six different winding module mechanisms. They are the Wolf Designs module 2.7, and are their most advanced modules today. They are also easy to use and understand. I also want to add that they offer functionality you probably won’t use, but still appreciate is there. 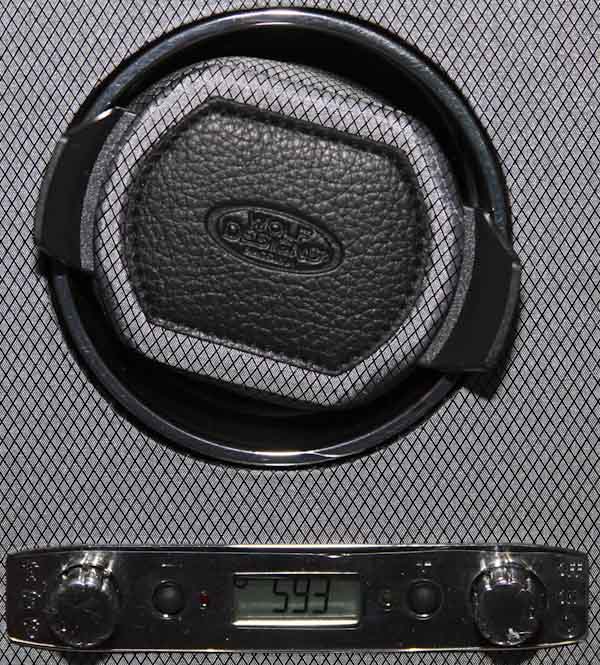 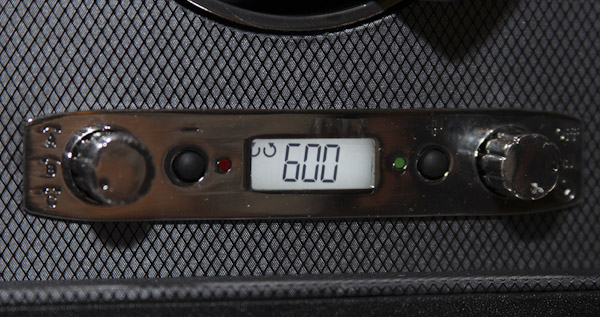 Looking at the control panel you’ll see two knobs, two buttons, and a backlit LCD display. The left knob is for indicating the direction of the winding. You can choose, clockwise, counterclockwise, or both directions. The other knobs is to turn the module on or off (you don’t need to have all of them running at the same time) or to activate time delayed winding. The buttons around the screen are to select either the number of rotations per day, or to indicate the time delay until it starts winding.

In my experience a winder really only needs to turn in the right direction (I usually just have it turn in both to be safe), and to rotate enough times. The majority of modern automatic watches simply cannot be over-wound. Some super discriminating watch collectors like to play with this function for a variety of “enthusiast” reasons that I won’t get into, but for most people the basic settings are enough. If you don’t want to investigate and learn how many rotations per a day your watch needs to stay wound, 900 is a good amount. 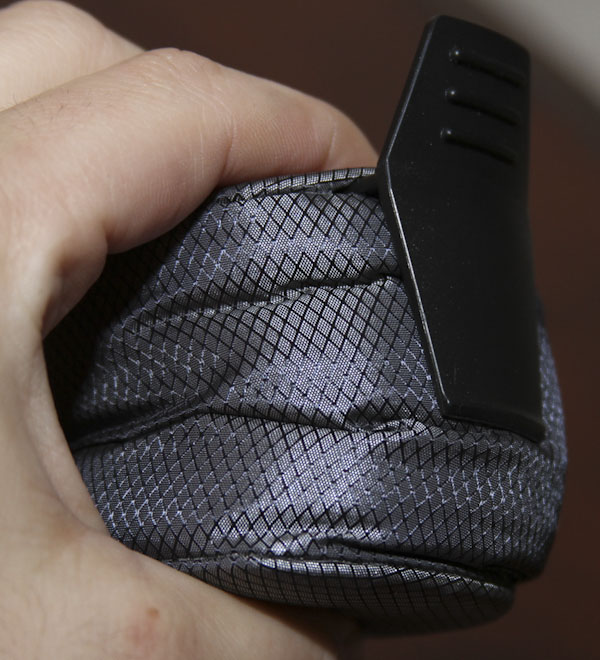 I actually like the module 2.7 for its ease of use and intuitive operation. One suggestion I would make is that there is a memory function. This means that when you turn the unit off, it recalls what the last setting was. By default when turned on, it will automatically go to 600 turns per day. Not a huge issue though. Technically I believe that Wolf Designs recommends you turn off the module when placing and removing a watch cuff, but I don’t think it will hurt too much not too.

The winder drum is pretty silent (especially with the cover closed), and seems to run smoothly. I really don’t have complaints about the unit when it is operating. The large cuff unit comes out with a snap and clicks back into place with ease. With a springy back, it is meant to collapse to handle large to small watches. I found that it was able to accommodate most, but not all watches. Women especially might find it a bit tough to put their watches on this unit. For whatever reason winders tend to be mostly made for larger sized bracelets. An interesting feature that I like about the module 2.7 is that if there is a problem with the mechanism or something is stuck or not inserted properly, the little red light will blink. Otherwise the green light will blink (slowly, but it does blink all the time). 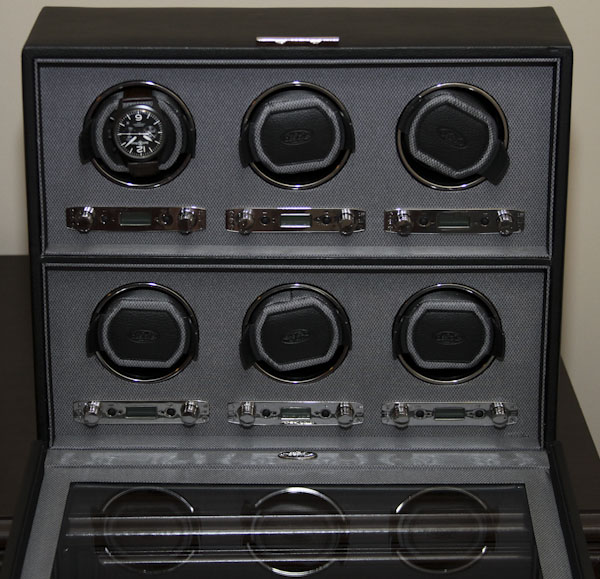 Back when I started out my collection of automatic watches I wanted them to be all wound – all the time. I didn’t have a winder, so I just sat there hand-winding them constantly. It was a pain. After getting my first watch winders I vowed to never go back to that. These days I have watches in winders, and watches just laying around. Nevertheless, I find that I almost always go to the ones in the winder first. Something about them feeling fresh and wound, and running that makes them a default choice for the day. The benefits of a watch winder are clear, but it can be a daunting purchase to a new collector. Though you won’t regret getting one. The Wolf Designs Viceroy 6 Watch Winder is a fair deal at $1,799. It looks attractive, is relatively affordable, and serves up to 6 watches without whining. Best of all is that until October 17th, 2011, aBlogtoRead.com readers can score 50% off any Wolf Designs product ($100 minimum) by using the code “822500” during check out (US and UK customers only).

Thanks to Wolf Designs for the review unit. Opinions are 100% independent.
Advertising Message