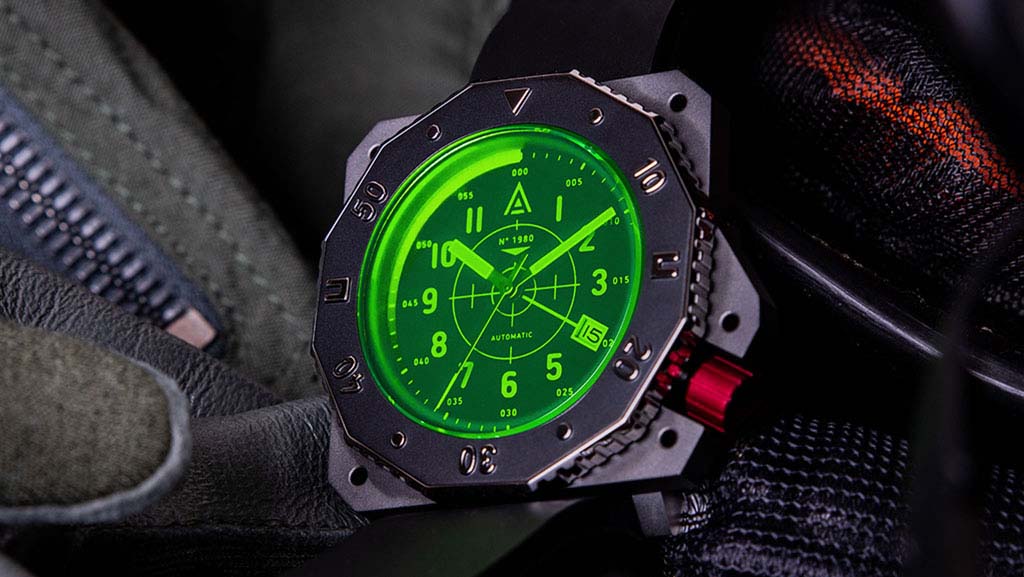 For generations, wristwatches functioned as essential tools for all sorts of daring occupations. With so many time-telling technologies available today, the true need for a wristwatch is all but obsolete. Nevertheless, there is an air of romance around the concept that they were once an ever-present companion on life’s adventures. WT Author, based in Shropshire, UK, has a knack for creating modern mechanical models that pull design inspiration from specific decades. After the success of last year’s Nº 1973 diver collection, the WT quartet has pulled out all the stops for its 10th anniversary. The new “FINAL COUNTDOWN” Nº 1980-1989 Collection features 10 different iterations that each relate to military equipment or armaments. From the ocean depths to high-soaring contrails, each unique example is decidedly utilitarian with a clear nod to the 1980s. 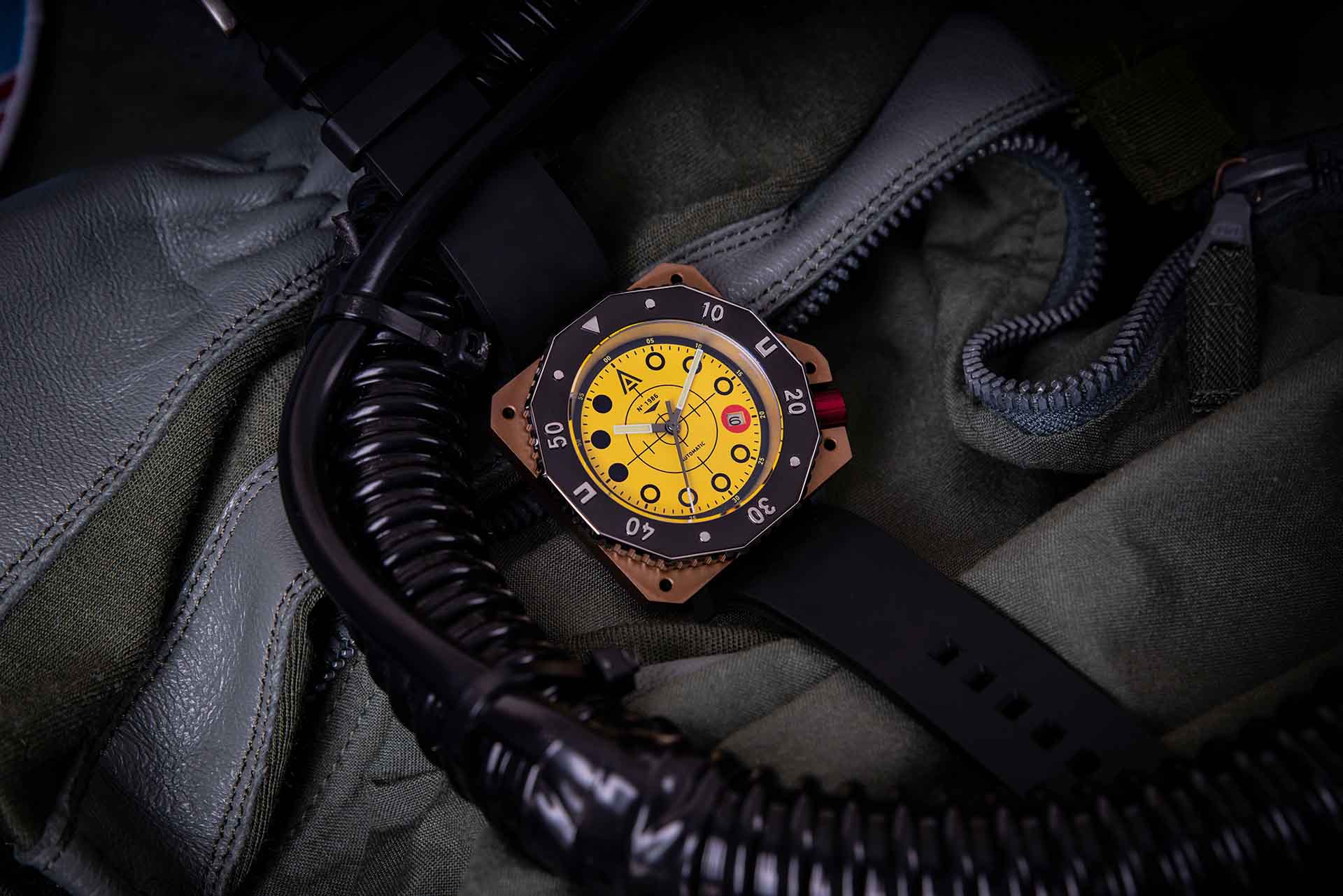 Each timepiece in the FINAL COUNTDOWN lineup features an asymmetrical, stainless steel case measuring 44mm in diameter, not including the pronounced 4 o’clock crown and armor-like guards. The lug-to-lug distance measures 49mm. Though the 13.4mm thickness is fairly modest, the aggressive styling of the case ensures that this is a watch with some serious wrist presence. Other universal similarities among all 10 variations are the ion-plated, uni-directional rotating dive bezels and the Miyota Caliber Nº 9015 Mechanical Movement by Citizen. For a timepiece as robust as the Nº 1980 series, an equally durable movement had to be matched up. The stalwart Miyota features both hacking and hand-winding capabilities and will run for up to 42 hours once fully wound. Seeing as how water resistance is rated to a depth of 100m, each piece crafted by WT Author can handle its fair share of aquatic adversity. 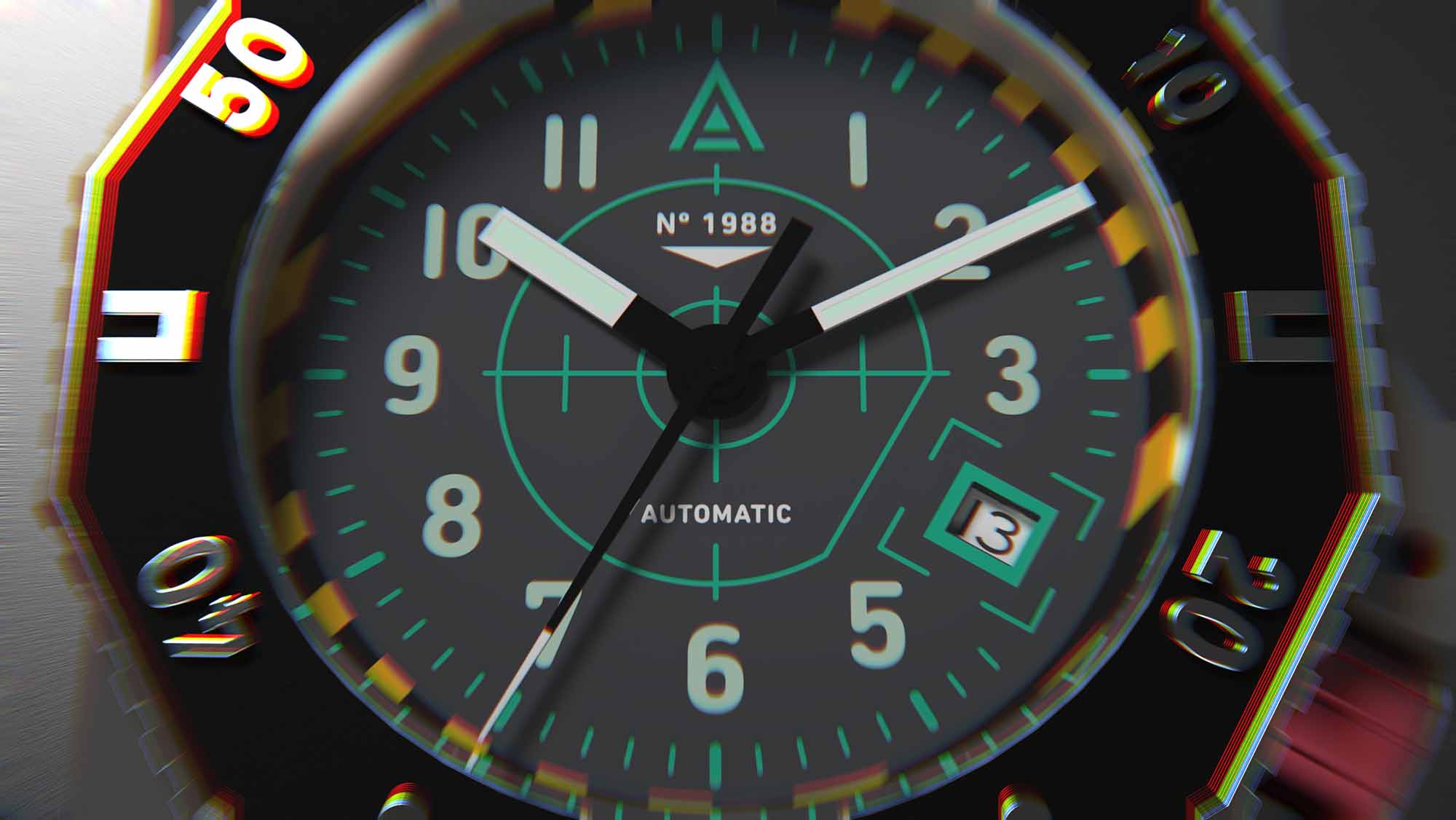 Beginning with the Nº 1980, dubbed the “Invincible,” it is clear that the folks at WT Author are unafraid of deviating from mainstream watch design. Named after an early ’80s aircraft carrier, the effect of the neon green crystal against the monochromatic dial creates a sonar-like display that is both nautical and niche. The Nº 1981 “Stealth” is uniformly blacked-out in reference to the inaugural 1981 flight of the Lockheed F-117 Nighthawk. From the dial to the bezel and case, the only hints of color are the red of the crown, date window, and 12 o’clock marker. Sticking with the aeronautical theme, the Nº 1982 “Squadron” model soars with its gray case and bi-color dial. Referencing the attitude meter found in the Tornado GR1 tactical aircraft, this is an aviation-adjacent timepiece that captures the “cool factor” of the mechanical gauges that make air travel possible. 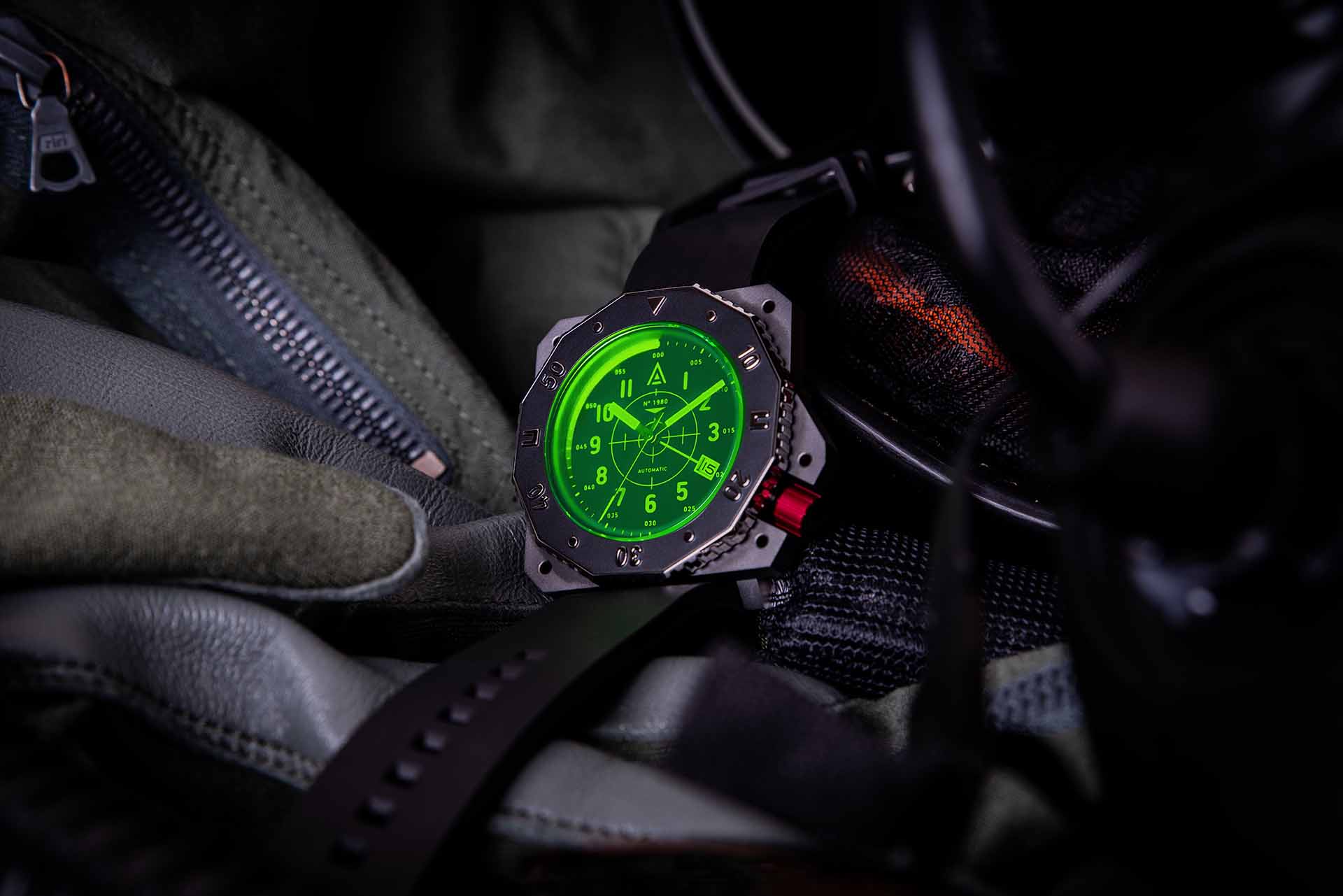 The Nº 1983 features a red sapphire crystal and hazard chevron minute track. The colors of the dial are all tinted crimson, and this contrasts well with the matte silver case. Called the “Altitude,” it looks like a timepiece that says “all systems go.” The Nº 1984, “Orbit” is all about the white dial. Small circles adorn the dial as a reference to the intricate satellite network called the Strategic Defense Initiative in ’84. The Nº 1985 features Arabic numerals, a maroon and navy dial, and a matte green case. The name of the model, “Bird of Prey,” is taken from the type B British roundel. 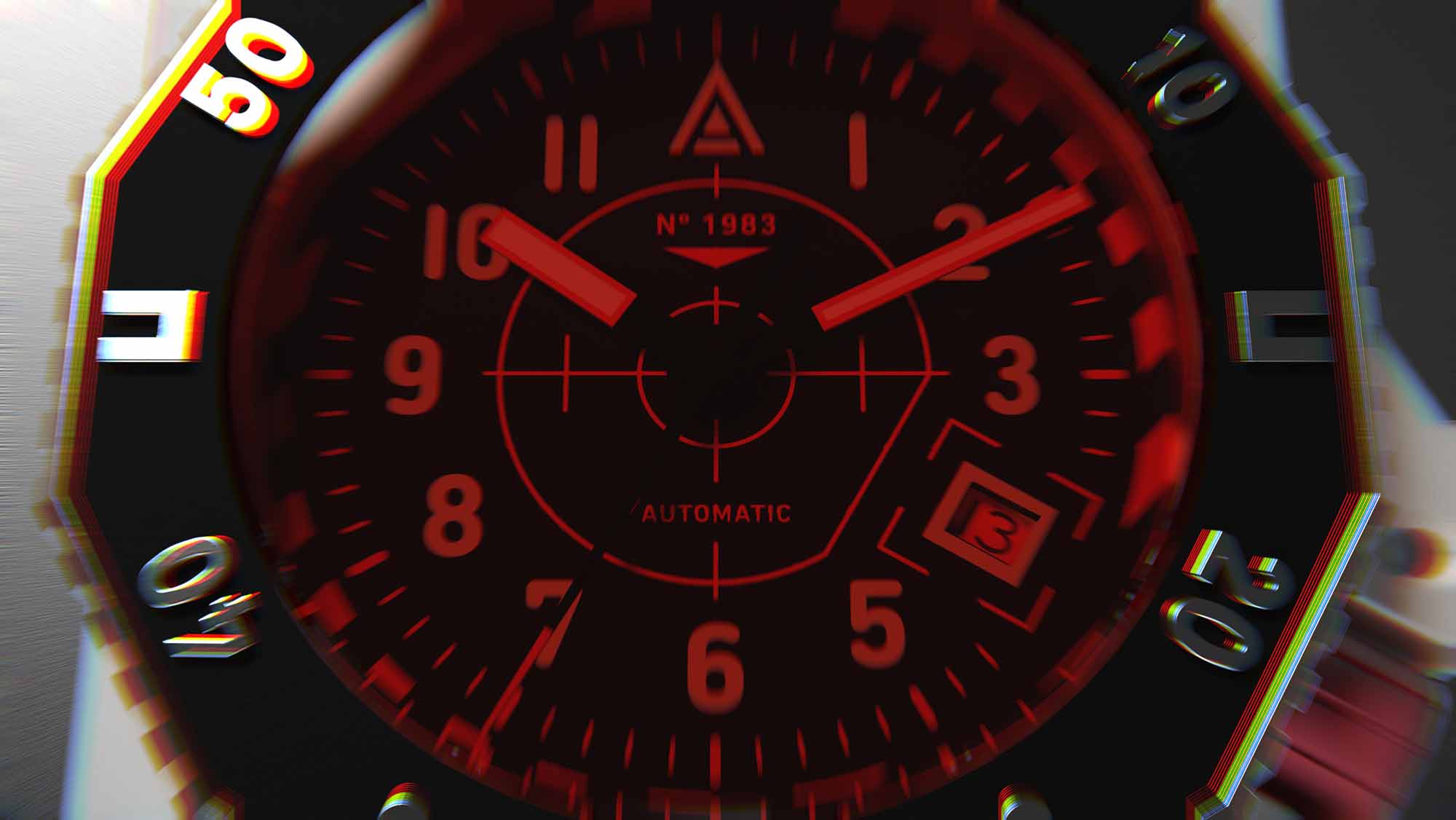 Taking a brighter turn (at least in terms of color) is the Nº 1986 model. Despite the cheerfulness of the bright yellow dial, this piece is dubbed “Doomsday.” The ion-plated, bronze-colored case brings a military vibe that ties it to the greater theme at hand. This is, by far, the loudest dial of the FINAL COUNTDOWN collection, and it shines like a beacon. The “Vanguard” model, based upon a submarine retired in 1987, is inspired by a radar display. The Nº 1988, “Eagle” looks like it was pulled from the instrument cluster of a tactical jet aircraft. The unique coloration of the seafoam-green dial accents is complemented by the neutral gray upon which they are painted. For the last of the FINAL COUNTDOWN, WT Author went green. The “Guardian” is clad in drab olive, both in the dial and in the case. This particular shade was pulled from the camouflage hue of the AH-64 Apache, which was first used in combat in 1989, hence why this watch resides at the end of the lineup. 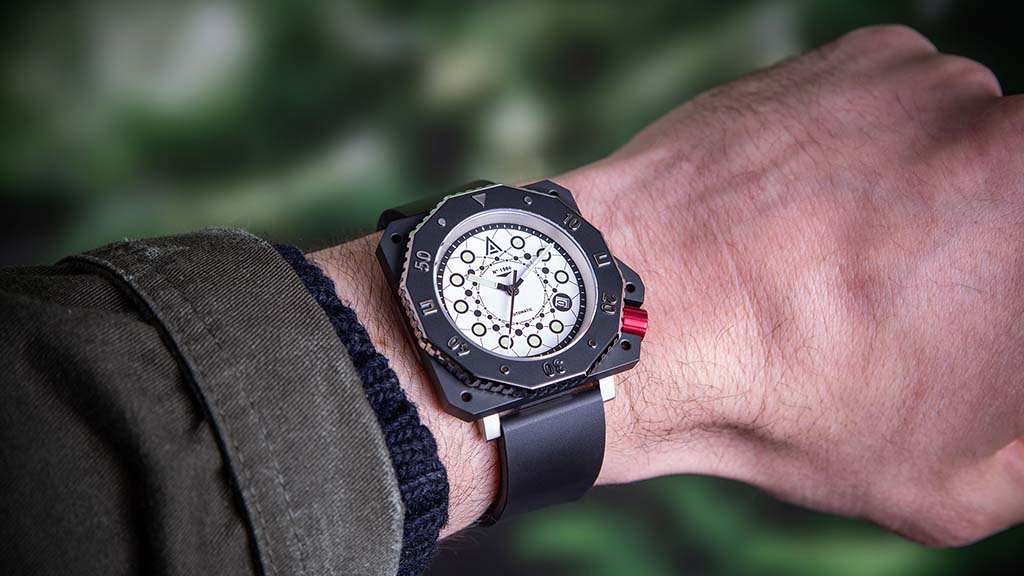 The 1980s was a decade defined by military innovation and advancement, and every aspect of this progression is captured among the 10 models within the FINAL COUNTDOWN collection. Each variant is limited to just 50 pieces, so keep the April 26th availability date on your radar. For 31 days, they will be available via Kickstarter by pledging £350 (approximately $450 USD) — once this window has closed, the retail price is set at £500 (approximately $675 USD). So take the time to survey WT Author’s FINAL COUNTDOWN releases, get the reference of choice in your crosshairs, and keep track of that drop time.