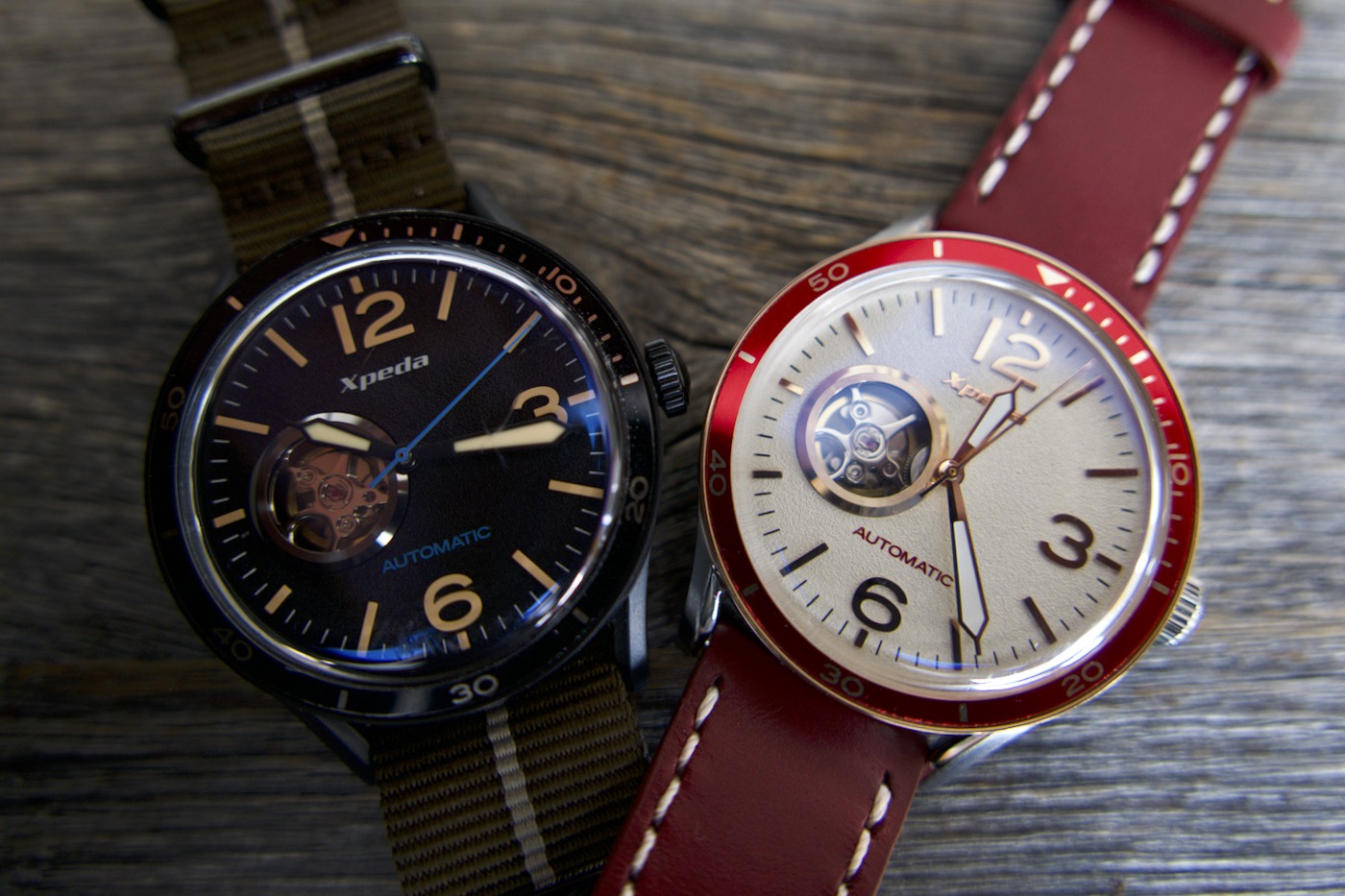 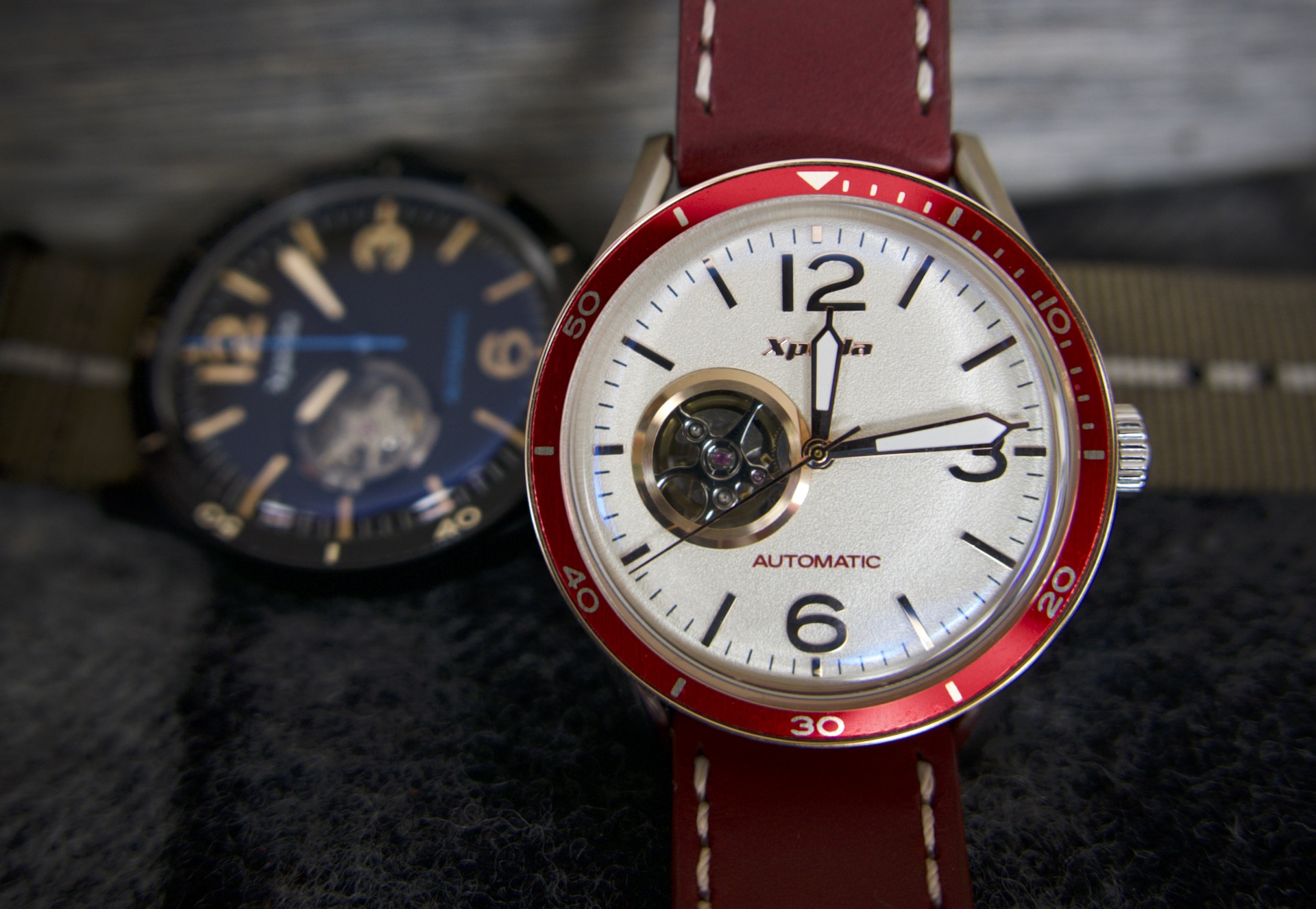 Pilot watches typically fall into three broad categories: historical recreations/reinterpretations based on military-issued aviation watches (e.g., IWC fliegers), modern aviation watches (e.g., Breitling Avenger), or watches inspired by actual aircrafts and instrumentation (e.g., Bell & Ross). Brazil-based Xpeda’s newest release falls into the latter category, but brings something new to the table in a way that made me think, “Why hasn’t anyone paid tribute to the one-and-only Amelia Earhart before?” (Note: If a brand has, let me know, I couldn’t find anything.)  I had a chance to go hands-on and spend some time with two watches from the aptly named Amelia collection, a fun and quirky series of watches. 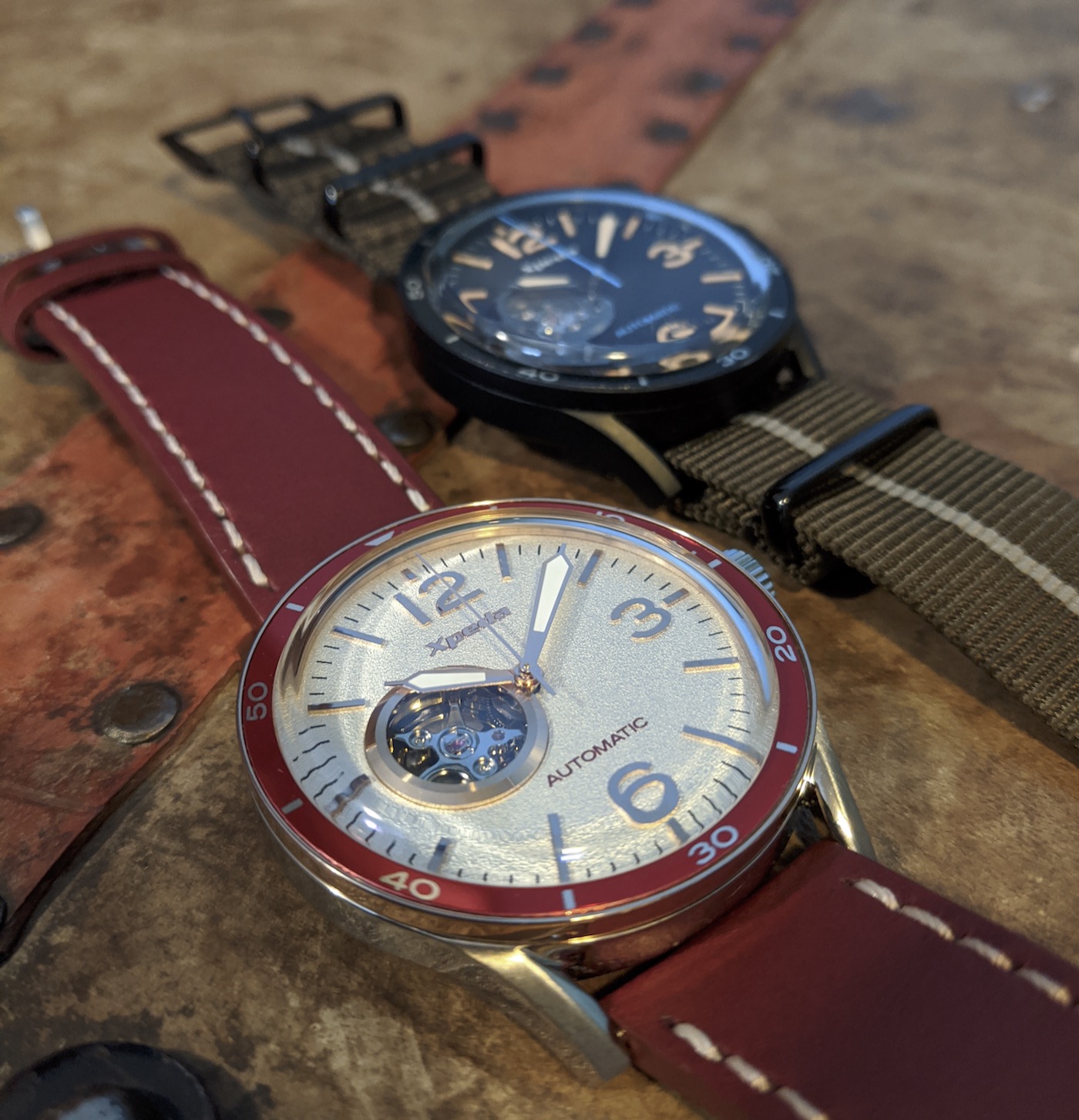 On May 20, 1932 Earhart became only the second person — and first woman — to successfully make a solo journey across the Atlantic Ocean, flying from Newfoundland, Canada to Londonderry, Northern Ireland. She performed this groundbreaking, and glass-ceiling-shattering, flight in an NR-7952 Lockheed 5B Vega. On her wrist at the time was a Longines chronograph. (In a fitting tribute, that very watch accompanied astronaut Shannon Walker to the International Space Station 82 years to the day after Earhart’s flight). Xpeda’s tribute to Earhart doesn’t derive from her personal watch but rather her 5B Vega, which she affectionately referred to as her “Little Red Bus.” The striking red and gold of the 5B Vega is readily apparent on the flagship model of Xpeda’s Amelia series, the Vega Red. 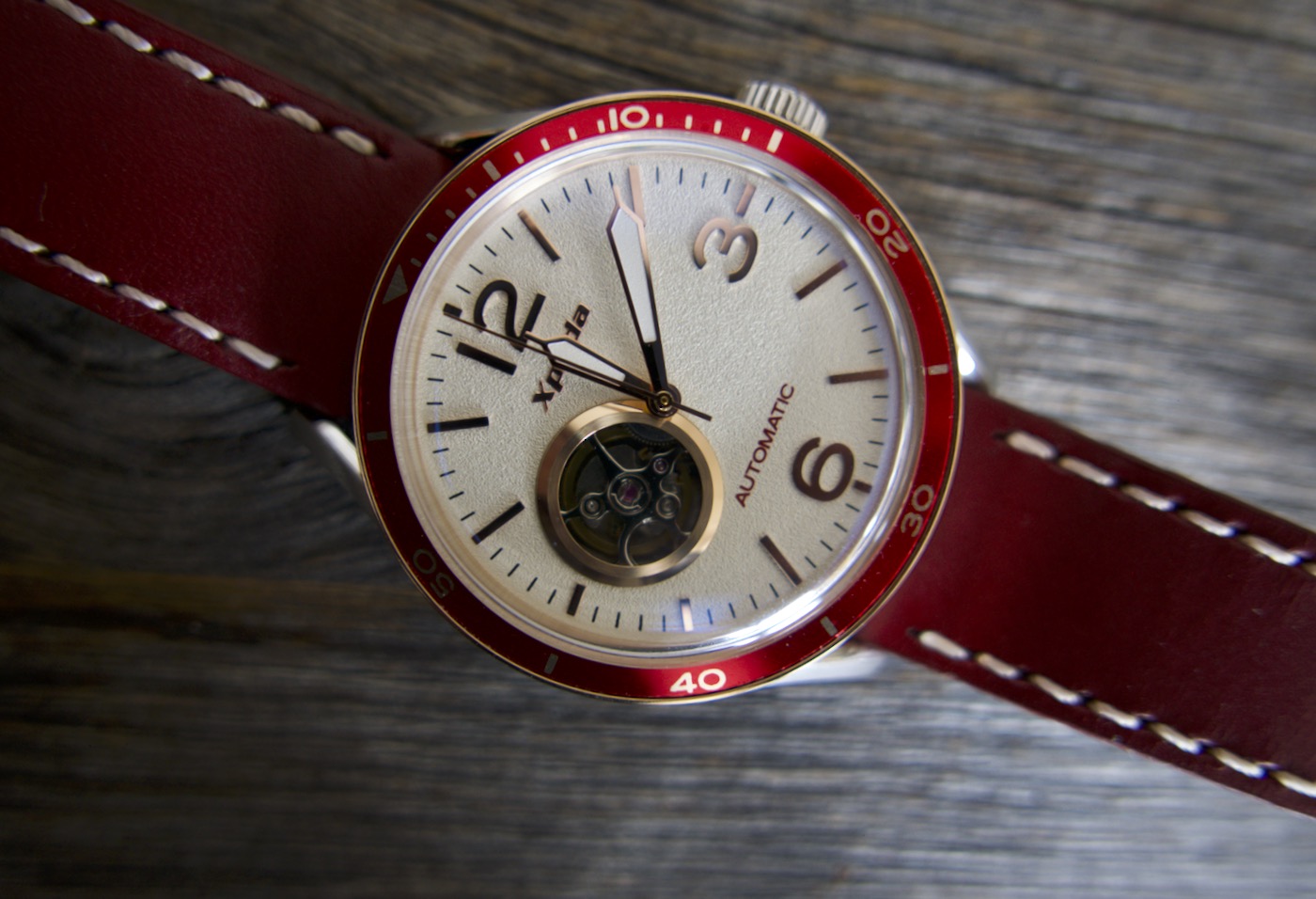 Throughout the watch, Xpeda incorporates several other design cues from Amelia’s historic journey, some readily apparent, others a bit more esoteric. The dial combines a mix of stick indices, Arabic numerals at 12, 3, and 6, and broad sword hands — classic design elements inspired by cockpit instruments. Taking the place of Arabic numeral at 9 is an open-heart aperture, providing a glimpse of the balance wheel of the Seiko NH38 housed within. This is where things get interesting, as the open heart is covered by an “Umbra” lens, a photochromic lens that darkens in bright light (similar to transition glasses). Xpeda claims inspiration from aviator glasses worn by pilots to protect from harsh UV light. A bit cryptic, sure, but also a fun element that I haven’t seen in a watch before. 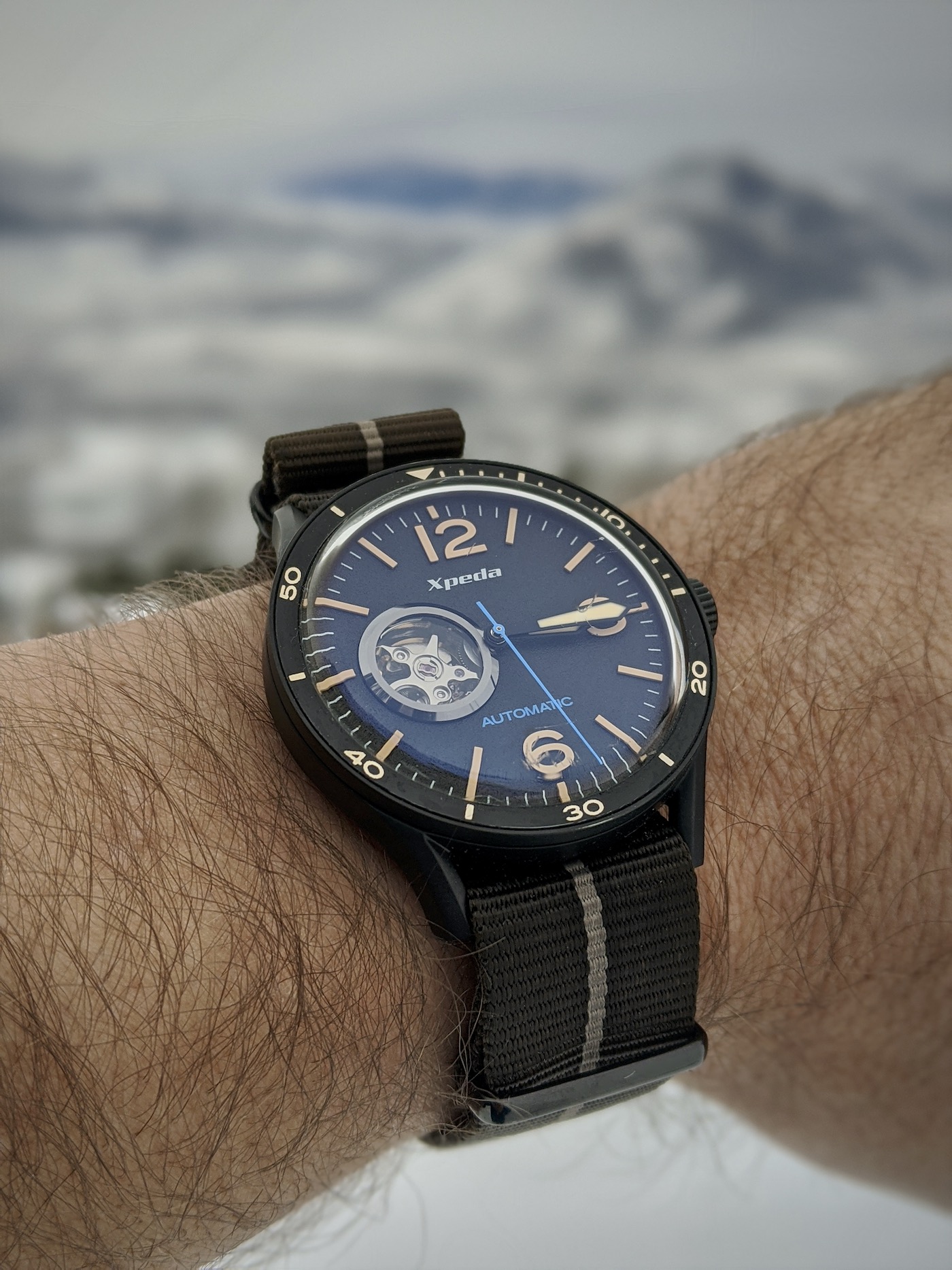 If the red and gold of the flagship Vega model are a bit much, the Amelia is offered in two other colorways. The Sahara Black features a black case and dial, sand-colored hands and markers, a pop of bright blue on the seconds hand and “Automatic” text on the dial. The Jet Black is, you guessed it, a blacked-out version of the Amelia, with a black case, gray dial, and black accents. All three are available with a choice of a fabric, rubber, mesh, or leather strap. Though the Vega Red model certainly is certainly most closely linked to the design inspiration, my personal favorite colorway was the Sahara Black, and it was the version I spent the most time wearing. It’s a simple and effective color combination that gets a boost of personality from the blue accents. 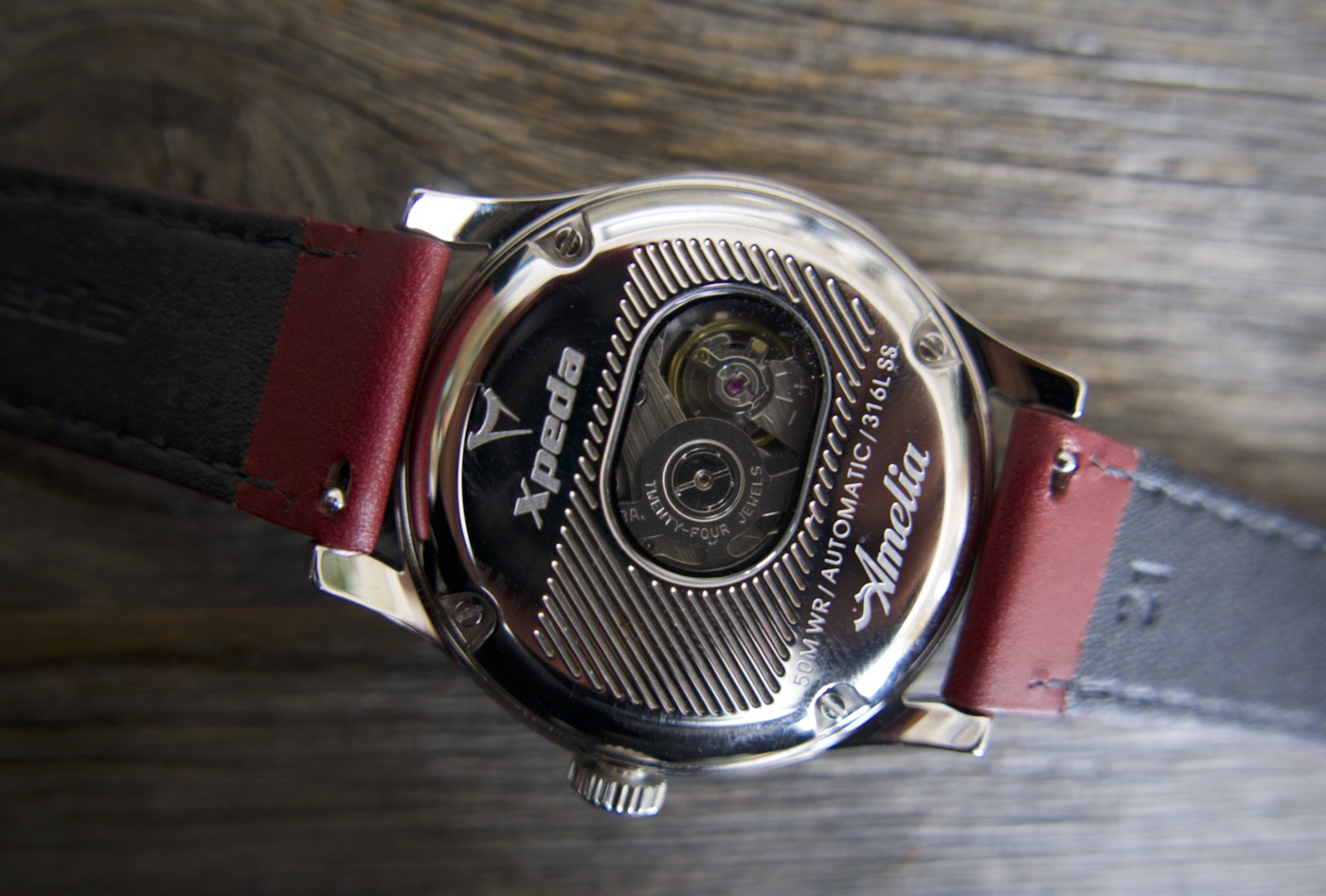 Powering the watch is a Seiko NH38 movement, partially visible through the open-heart aperture on the dial, and again through a second aperture on the caseback — an interesting middle ground between a solid and display caseback. This is solid and reliable automatic movement that beats at 21.6 kbph with 24 jewels, bi-directional winding, and a 41-hour power reserve. A nice movement a the sub-$300 price point and certainly welcome at the $200 Kickstarter price. (The Kickstarter project is now funded, so that price is no longer an option.) 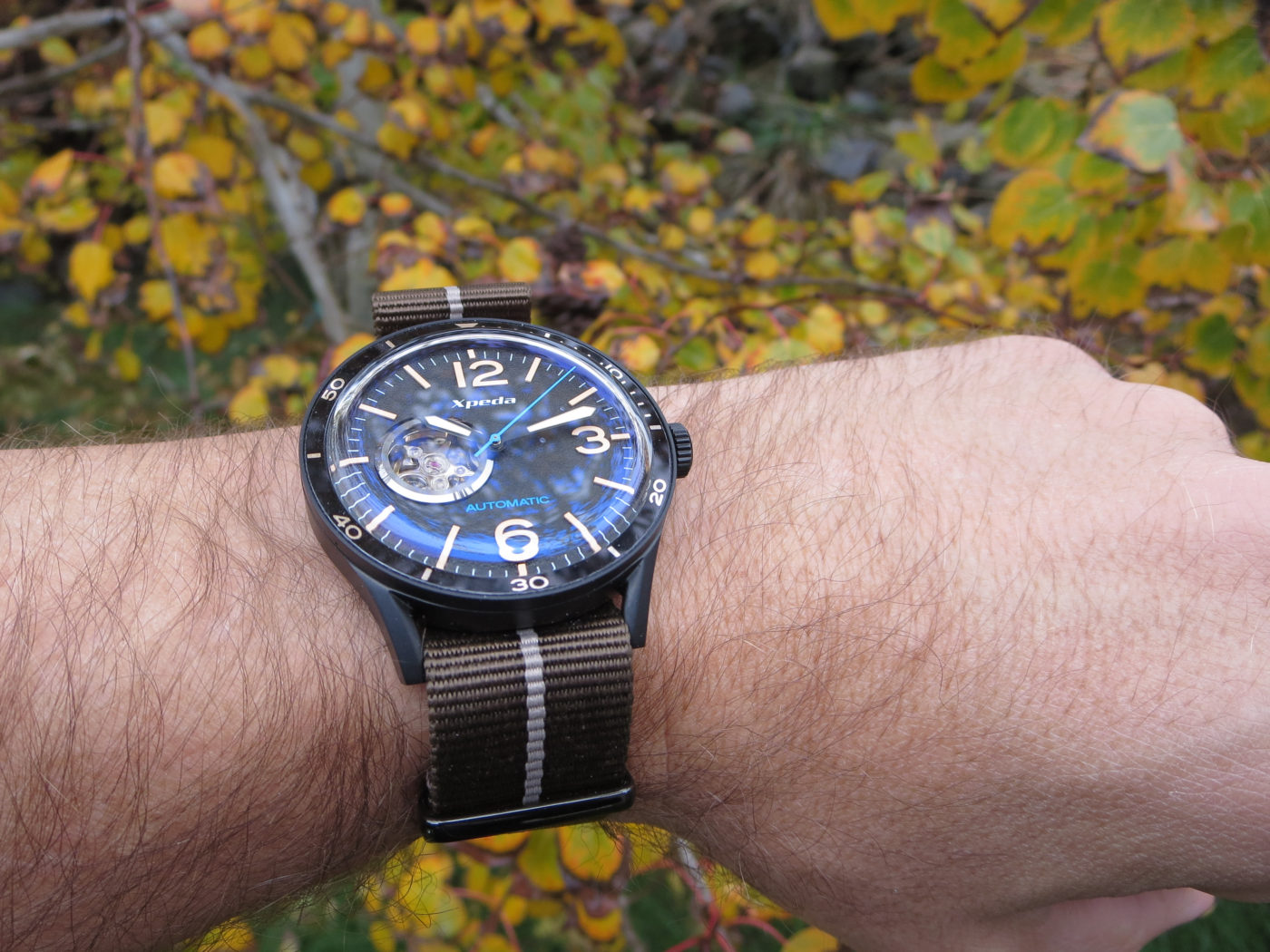 On the wrist, the Amelia has plenty of presence with a 42mm diameter and thin bezel. This is especially true of the high-polish, light-dialed Red Vega, which wears a fair bit larger than the Sahara Black simply due to the colors. The overall size of the watch is tempered by a modest 12mm height and light 108g weight for a 316L stainless-steel case. On both the fabric strap and the leather, the watch wore comfortably on my 6.75” wrist, the Black Sahara fitting in best with my personal style and fall wardrobe. 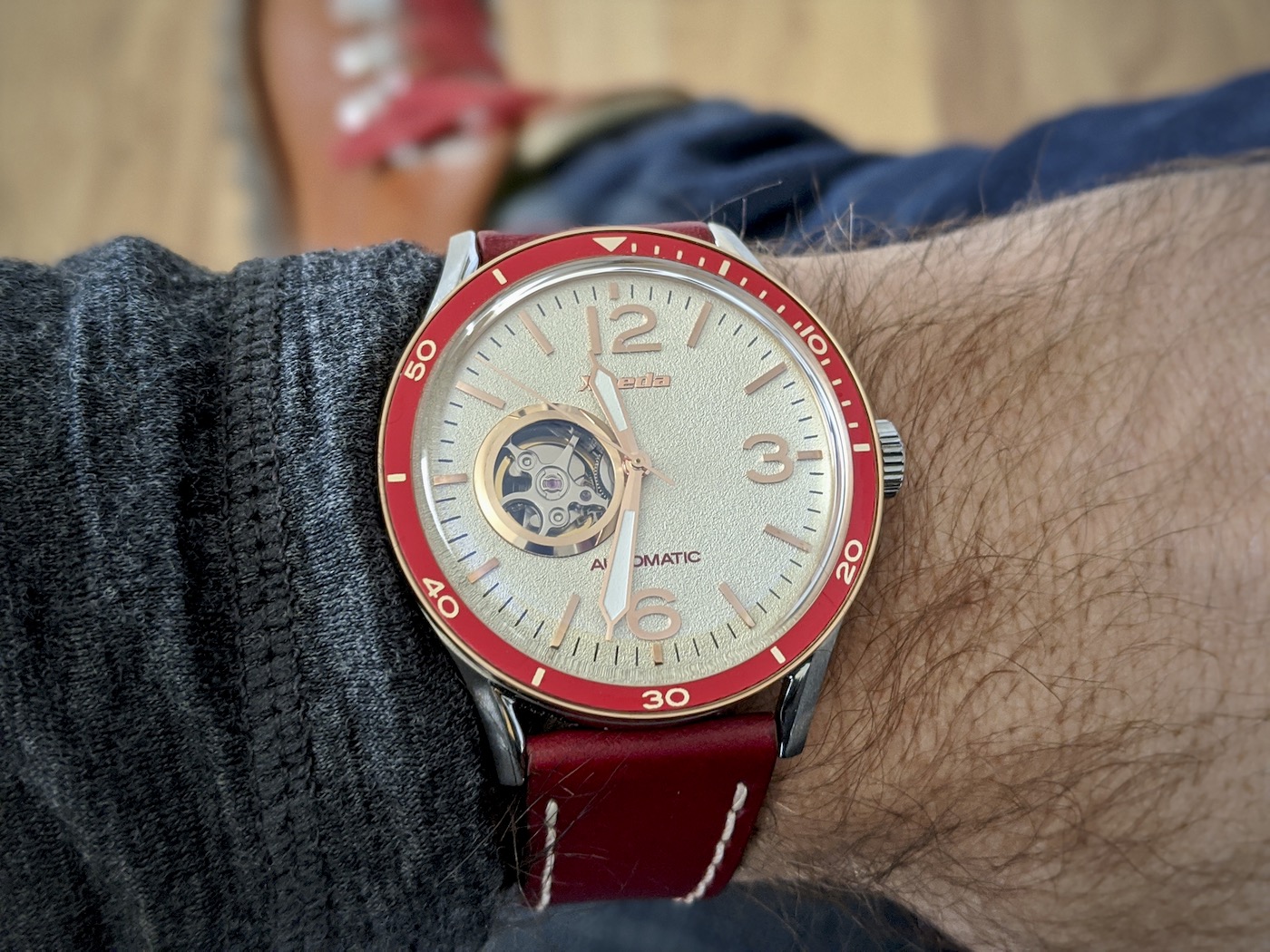 Looking closely, there are some enjoyable details that are easy to miss with a quick glance. Take the dial: The first thing you notice is the open-heart aperture (which is likely a love-it or hate-it affair), but it’s nestled within a deeply textured dial. The dial texture is a small detail but one that I quite enjoyed. In addition, the AR-coated mineral box crystal provides a bit of vintage charm. The leather strap also employs a quick-change strap, which is a nice time-saver. 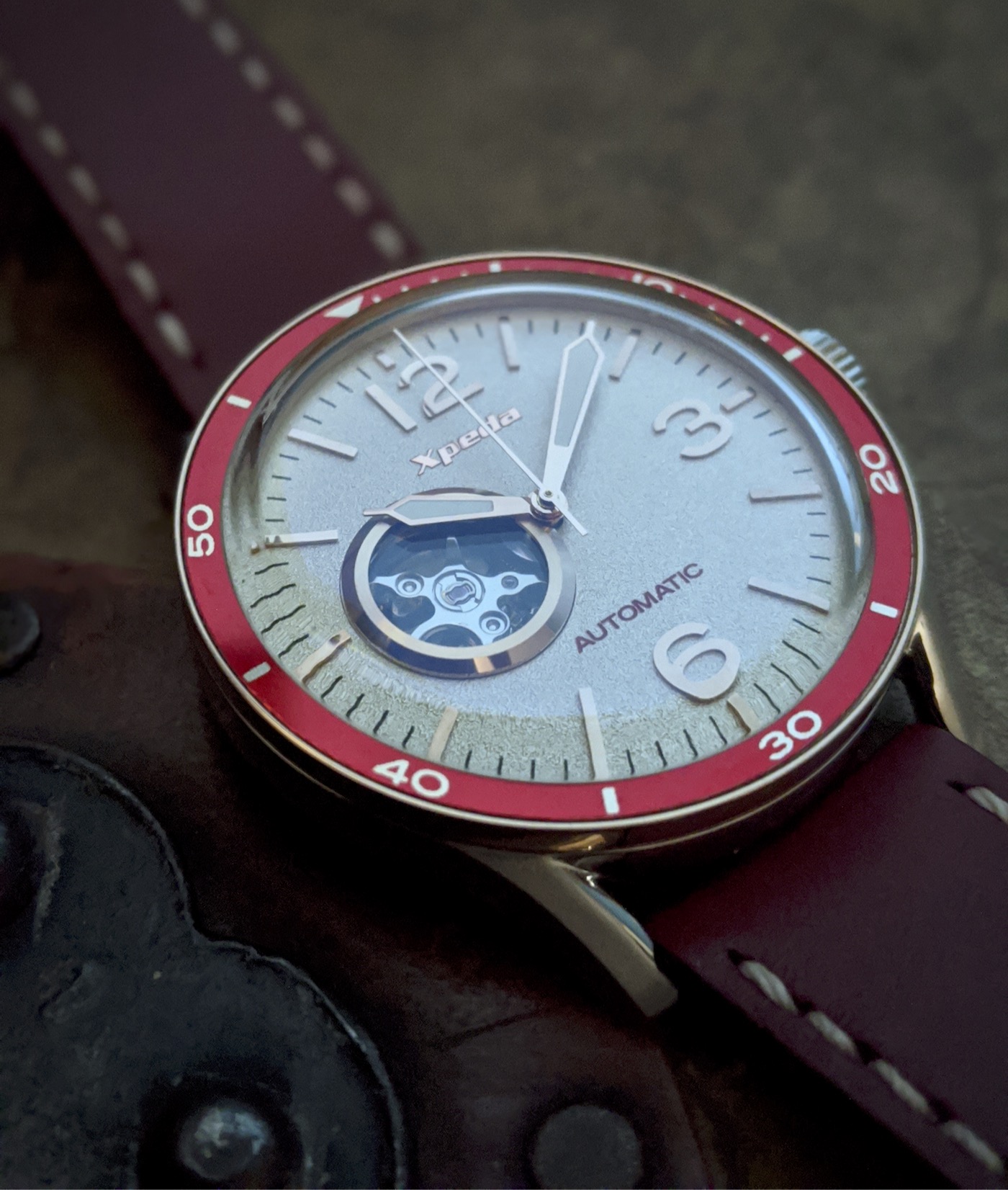 There are also a few misses with this model, most prominent of which is the fixed bezel. I’m not opposed to a fixed bezel, especially at this price point, but a non-functional dive-style bezel that includes minute marks from 0-15 on a pilot’s watch is a confusing mix. Second, only the hands are lumed, which is a one of those personal pet-peeves, as it limits the usefulness of having any lume to begin with. Finally, the watch is marketed as being appropriate for both men and women (and, given that the inspiration was Amelia Earhart, it should be!), but the 42mm diameter is likely going to overwhelm smaller wrists.

A tribute to Amelia Earhart’s journey was an excellent choice for Xpeda, a Brazilian brand primarily focused on quartz watches, via a special-edition, commemorative piece featuring an automatic movement. Though there are some details that seasoned watch aficionados will gripe about, at $299, this is a fun watch with some interesting design elements (e.g., the Umbra display in the dial). Learn more about the Amelia collection and other Xpeda watches at xpedawatch.com.