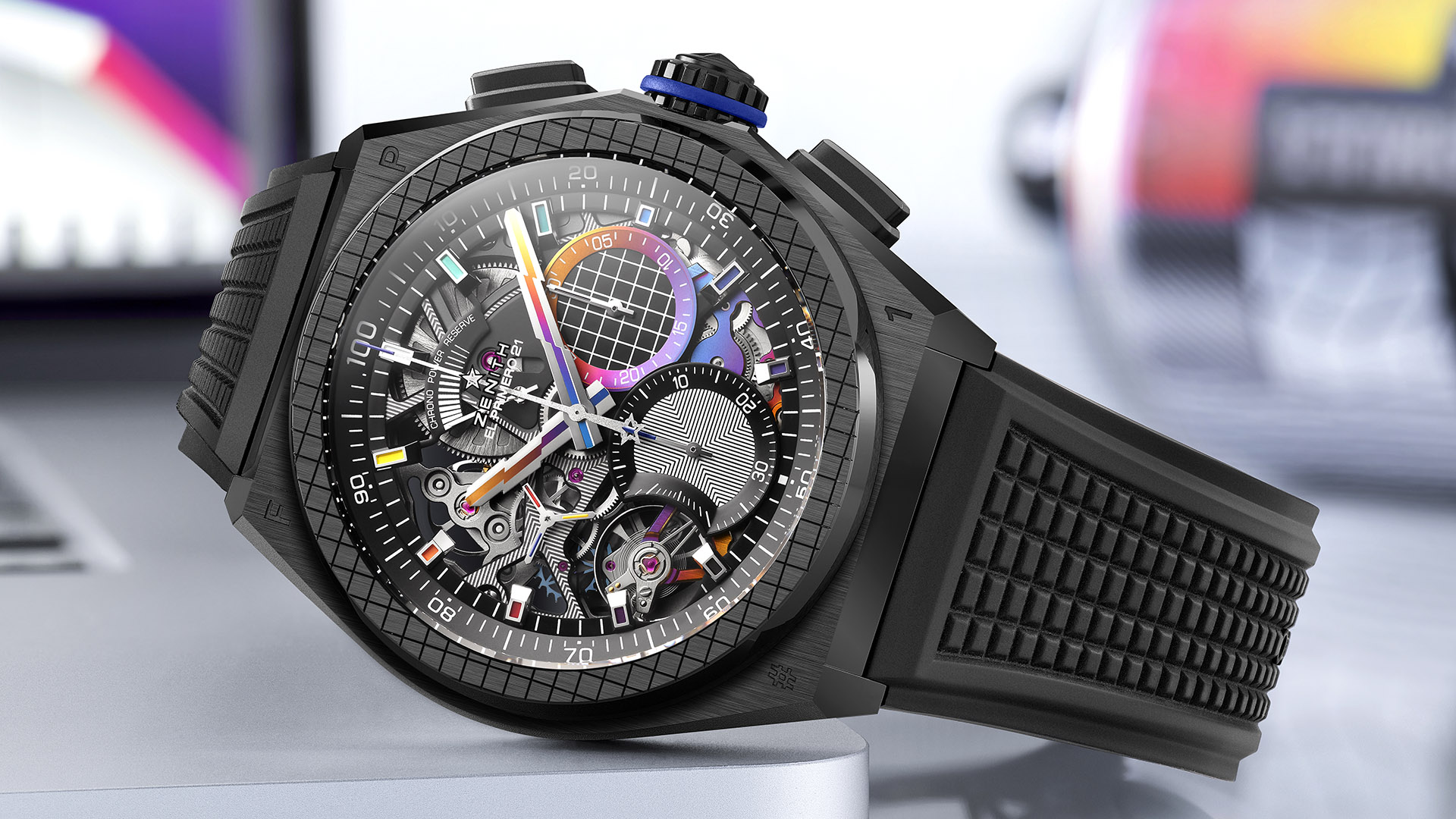 While the more vintage-focused El Primero series may be Zenith’s most famous offering, the brand’s ultramodern Defy 21 chronograph line has earned wide acclaim among enthusiasts in recent years for its mix of cutting-edge movement concepts and aggressive angular design. Beyond the base design, the Defy 21 form has become a canvas for a wide variety of colors and concepts ranging from urban-inspired green ceramic finishes to vibrant purple colorways. Zenith’s latest limited-edition iteration may be the most striking to date, with retro-modern visual textures and a shimmering rainbow finish. Designed in partnership with Argentinian-Spanish modern artist Felipe Pantone, the new limited edition Zenith Defy 21 Felipe Pantone is certainly not for the faint of heart but brings a spectrum of bold visual concepts to this high-tech line. 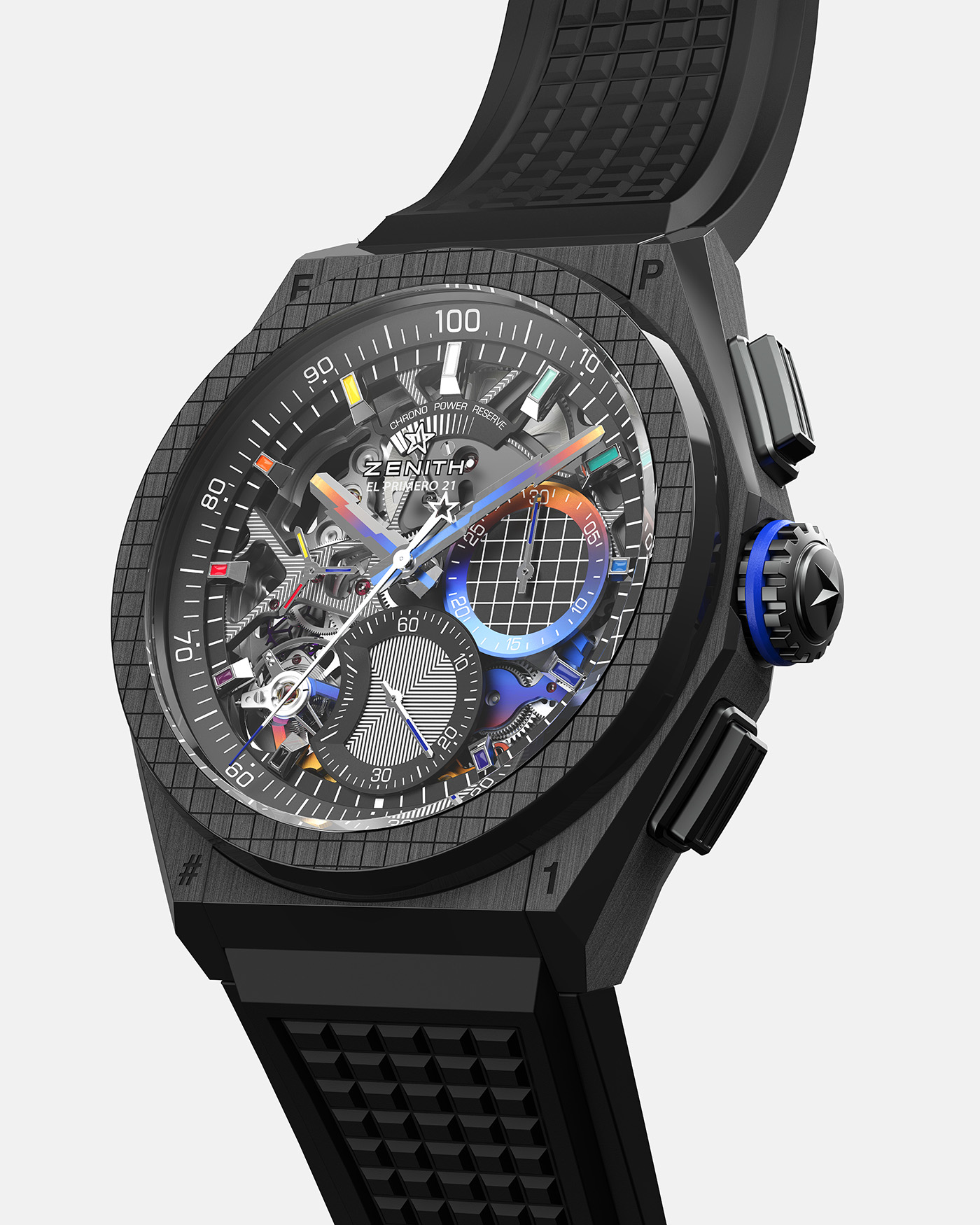 The 44mm black ceramic case of the Zenith Defy 21 Felipe Pantone follows the same general principles as earlier iterations, streamlining the hallmarks of modern integrated sports watch design into a smoother profile but maintaining sharp and planar surfacing. Where the Defy 21 Felipe Pantone sets itself apart is with etched surfacing, with a sharp grid pattern covering the top of the bezel and offering a distinctive accent to the mix of brushed surfaces and polished chamfers throughout the rest of the case. The other etchings are featured at each of the four corners of the main case body, spelling out “FP #1.” FP, of course, stands for Felipe Pantone, with the #1 representing the El Primero movement within. These etched markings will likely prove to be a polarizing feature, either acting as a bold and unorthodox artist’s signature or deliberately interrupting the visual flow of the case lines depending on opinion. Like the rest of the Defy 21 line, this model offers a solid 100 meters of water resistance. 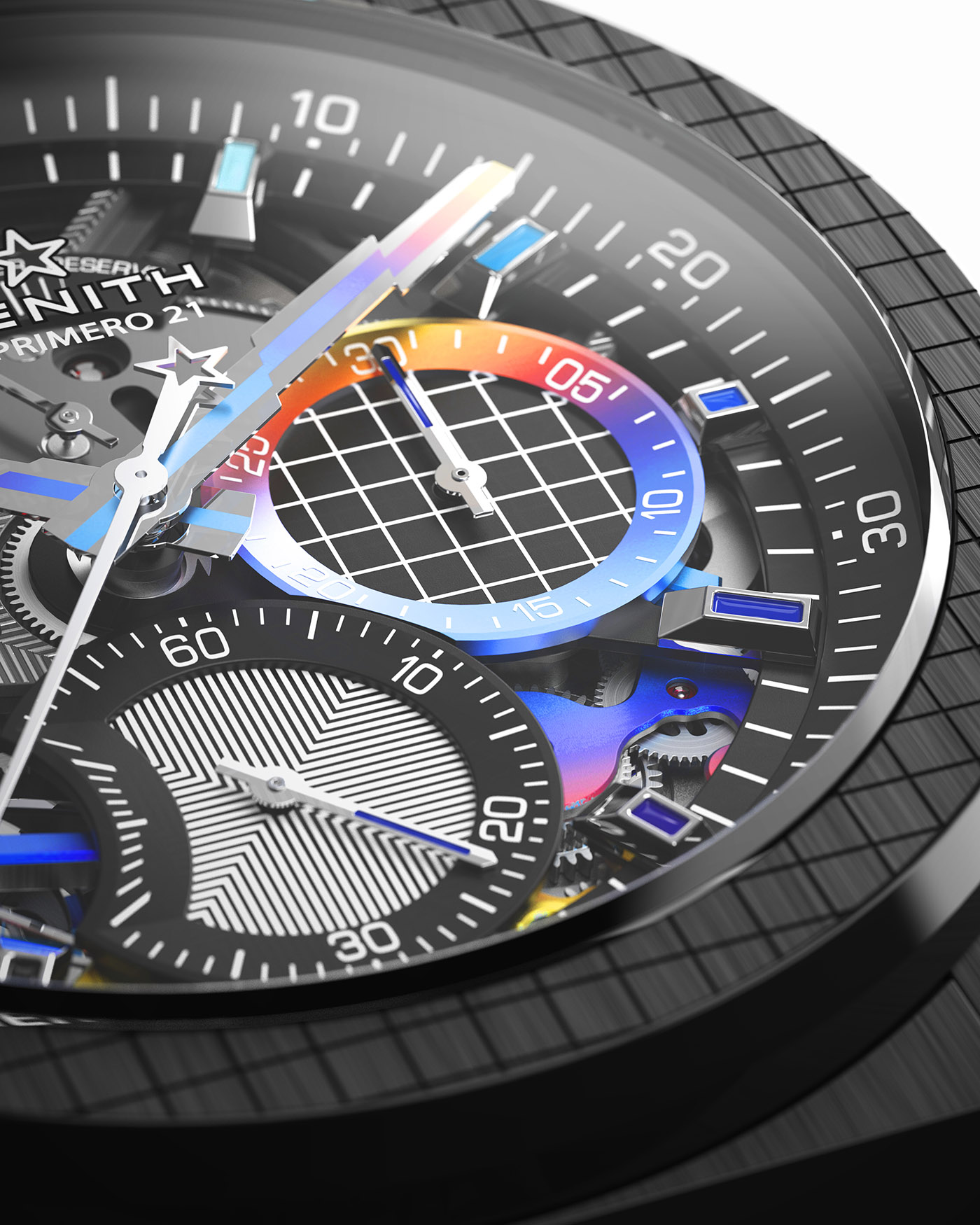 The semi-skeleton dial design of the Zenith Defy 21 line has played host to a variety of color schemes and interpretations before, but perhaps none are as punchy and colorful as the Defy 21 Felipe Pantone. Nearly every element of the design has been given a custom touch inspired by Pantone’s bright and geometric artwork. The baton handset takes on a unique jagged form in reference to Pantone’s recurring lightning bolt motif, with a central stripe in a one-of-a-kind metallic rainbow gradient PVD finish. In order to achieve this smooth transition of colors in PVD, Zenith has developed a proprietary three-dimensional PVD method using silicon particles as a base coating. This rainbow gradient is continued in the 3 o’clock chronograph subdial, where the rainbow outer ring is complemented by a bold black and white printed grid on the lower surface. The exposed bridges are finished with a mix of rainbow gradient PVD and a unique laser engraved and lacquered black and white moiré pattern, which together with the 6 o’clock chronograph seconds subdial creates an almost hypnotic effect in initial images. While the larger swathes of color and texture dominate the scene, Zenith populates nearly every piece of visual real estate with a striking colorful jab. The tall applied hour indices are each painted with a unique color to create a rainbow gradient of their own, while the subdial hands add splashes of yellows, reds, and blues. Taken as a whole, the effect of the dial is far from subtle, but it’s a design that undeniably commands attention, filtering the computerized geometric shapes and loud colors of ‘80s and ‘90s pop art through a luxurious ultramodern lens. 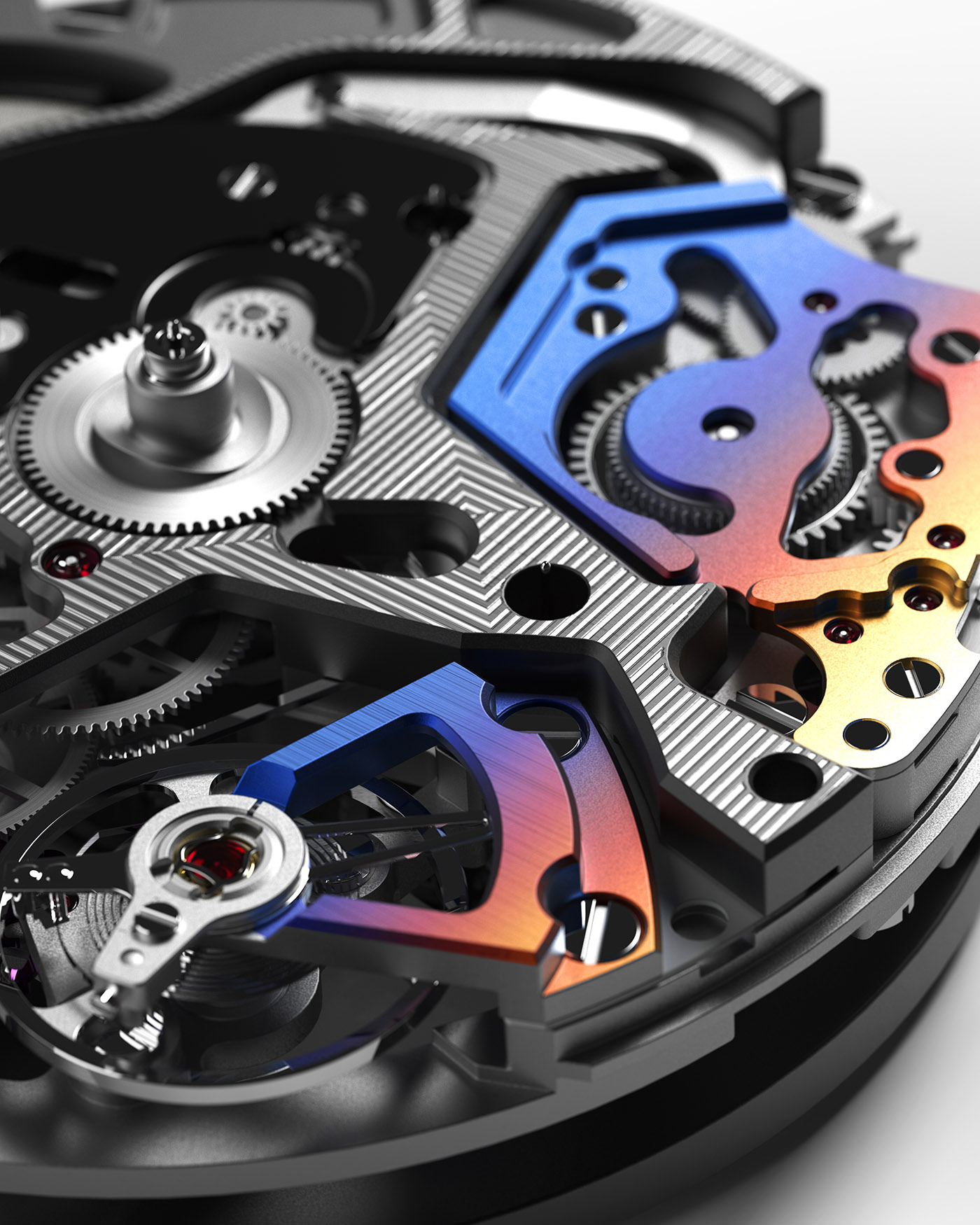 Like other members of the line, Zenith powers the Defy 21 Felipe Pantone with its in-house El Primero 9004 automatic chronograph movement. The El Primero 9004 features a pair of independent escapements, one operating the base watch movement at the El Primero line’s signature smooth 36,000 bph sweep, while the second escapement is dedicated solely to the chronograph itself. This second escapement is a genuinely impressive achievement in modern horology, beating at an incredible 360,000 bph. This extremely fast frequency enables the El Primero 9004’s central chronograph hand to sweep the dial completely once per second, allowing for 1/100 second measurements with a mechanical chronograph. The movement is also chronometer-certified for accuracy while offering a respectable 50 hours of power reserve. In addition to the mechanical specifications, the El Primero 9004 in the Defy 21 Felipe Pantone adds even more of the watch’s signature rainbow gradient PVD finish along the bridges, with a far larger surface area to showcase the smooth transition between colors. 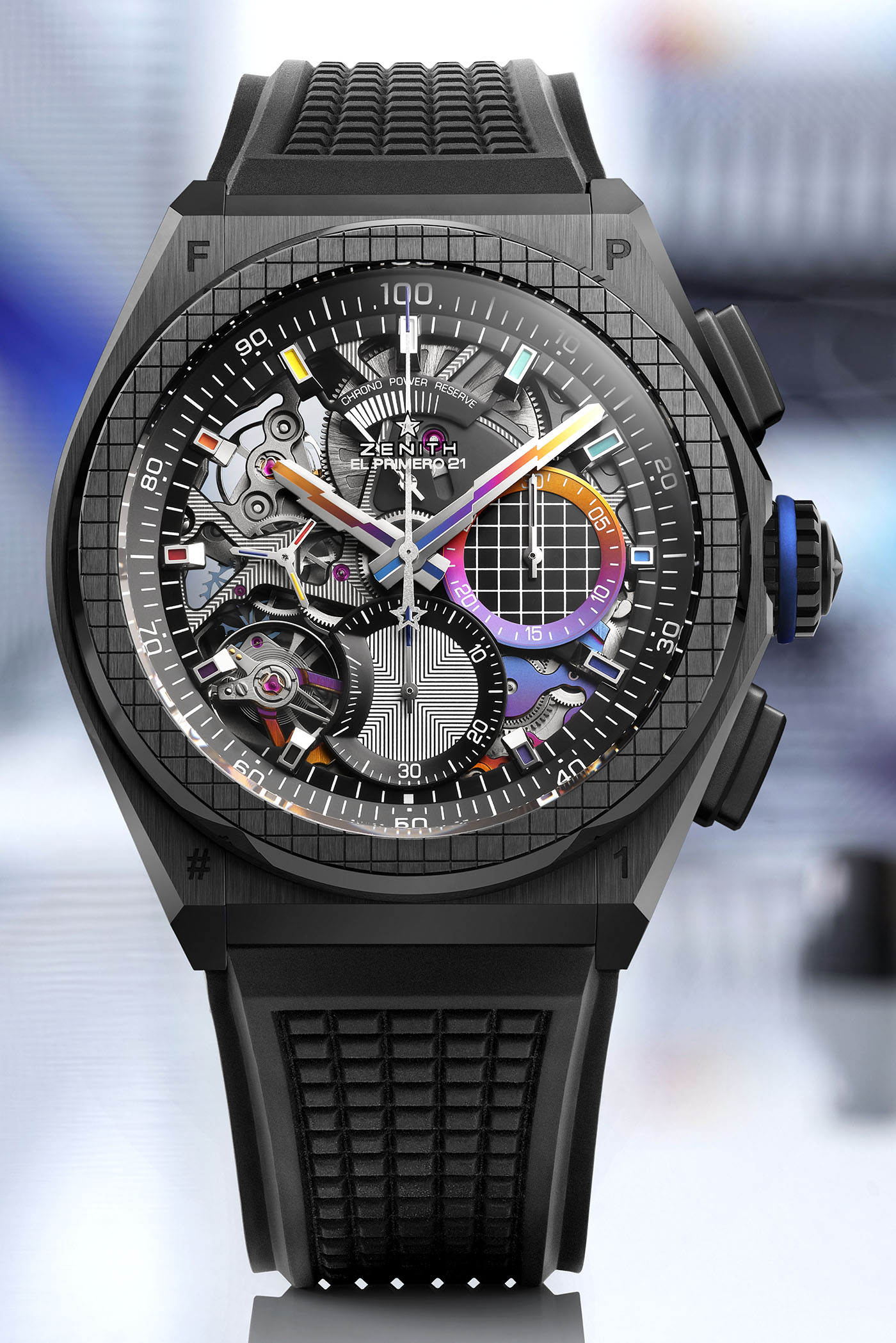 Zenith pairs the Defy 21 Felipe Pantone with an integrated rubber strap in black with a distorted grid texture, riffing on the grid pattern established on the dial and bezel while taking advantage of the greater visual depth afforded by the rubber material. The watch also includes a second rubber strap with an iridescent central insert, continuing the rainbow pattern while likely creating even more dynamic light play. 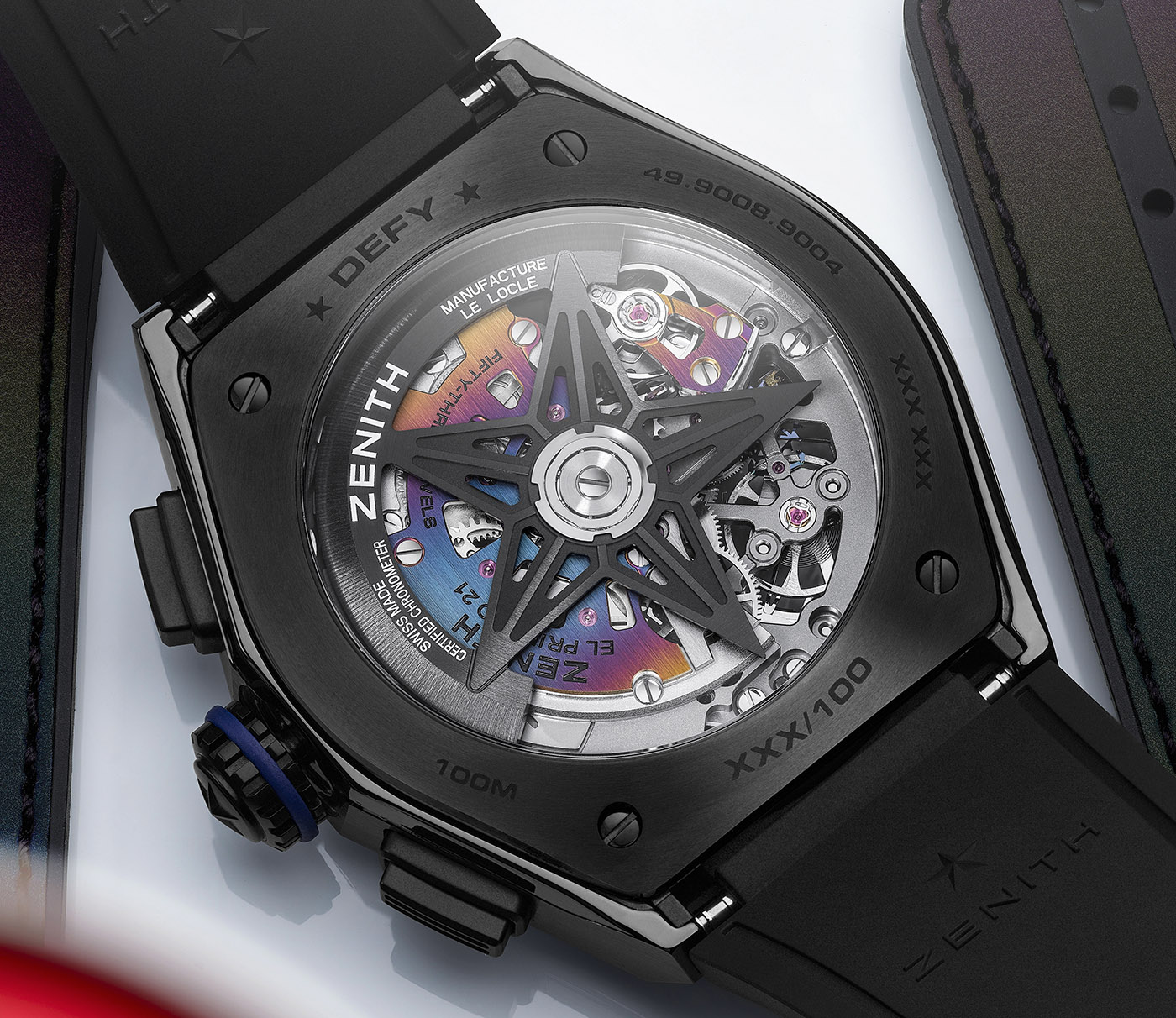