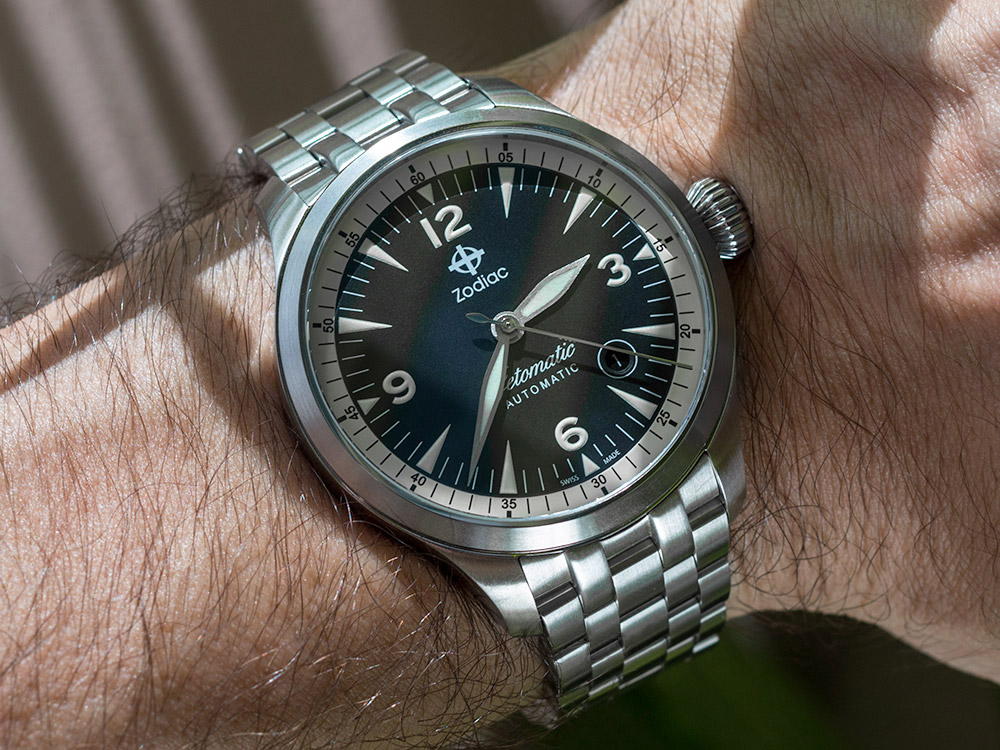 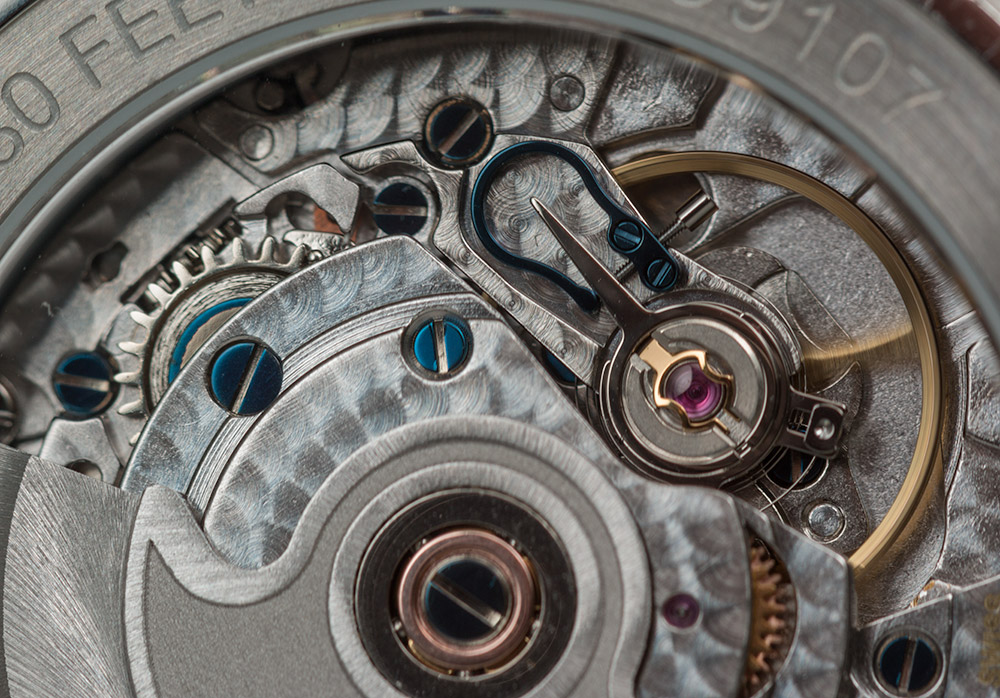 The STP 1-11 is very similar to the well-known ETA 2824-2, and it is more or less designed with the same functions and specs to fit in the same places (both measure 11½ ligne, or 25.6mm). The STP 3-13 found in the Zodiac Jetomatic operates at 4Hz with 44 hours of power reserve, and adds a blued swan neck regulator to the STP 1-11 movement [pause for oohing and aahing]. If you didn’t already know or weren’t able to guess from the pictures, that is the blue curved component extending across the balance cock. 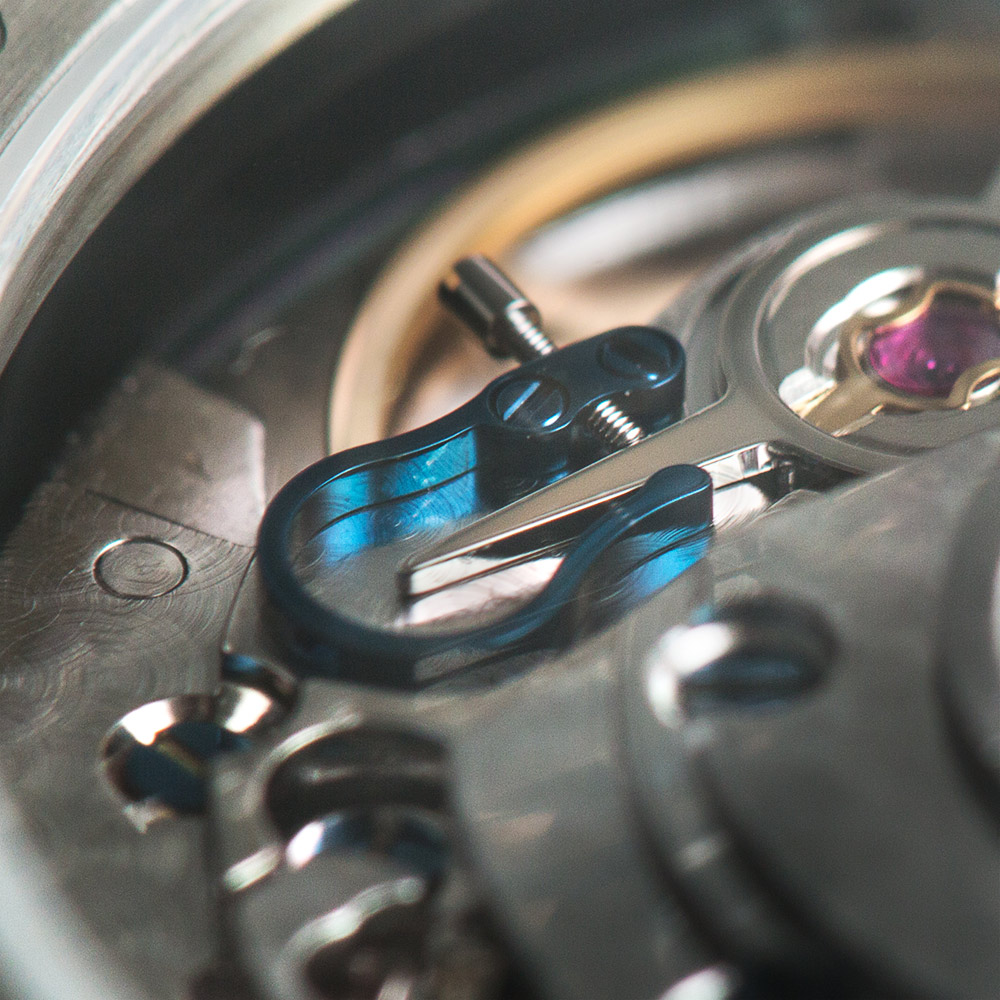 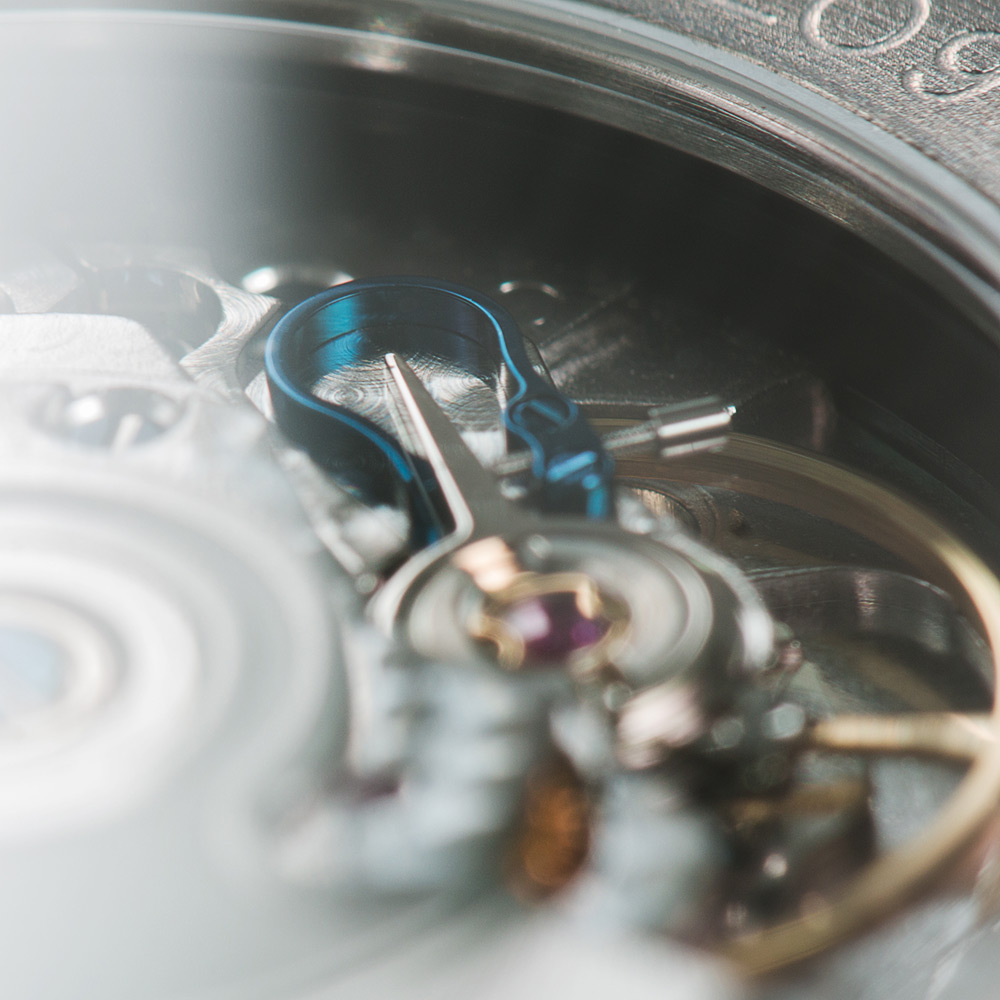 Swan neck regulators obviously get their name from their arcing shape and are a common feature in many high-end German (though not exclusively) watch movements. What is less obvious is what they are for, how they work, and what the big deal is. There are different systems for regulating a watch, which is one of the final steps in watch production and also performed during servicing to correct rate deviations – e.g., slowing it down if it’s found to be running fast. Sometimes it is done, for example, via weights in the form of small screws in the balance wheel, but the most common way is to adjust the length of the hairspring by very small amounts. 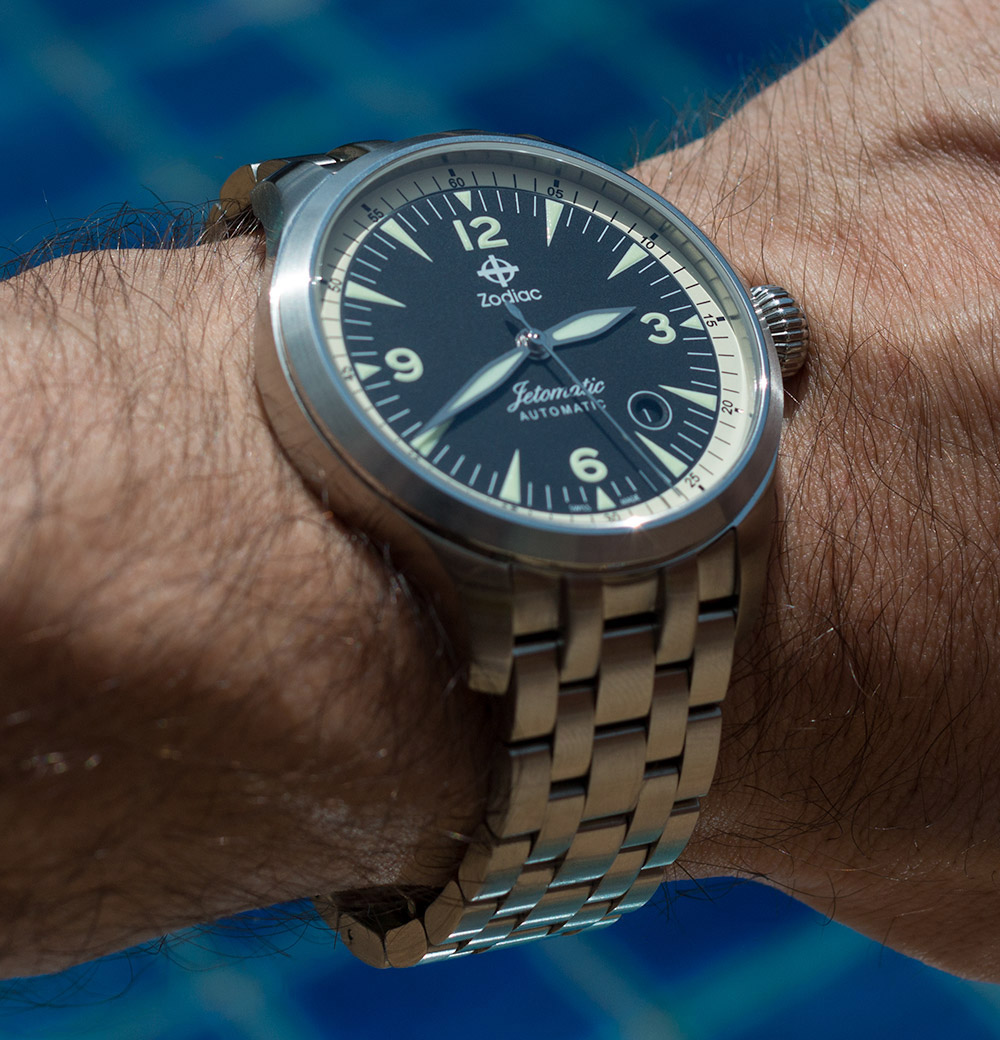 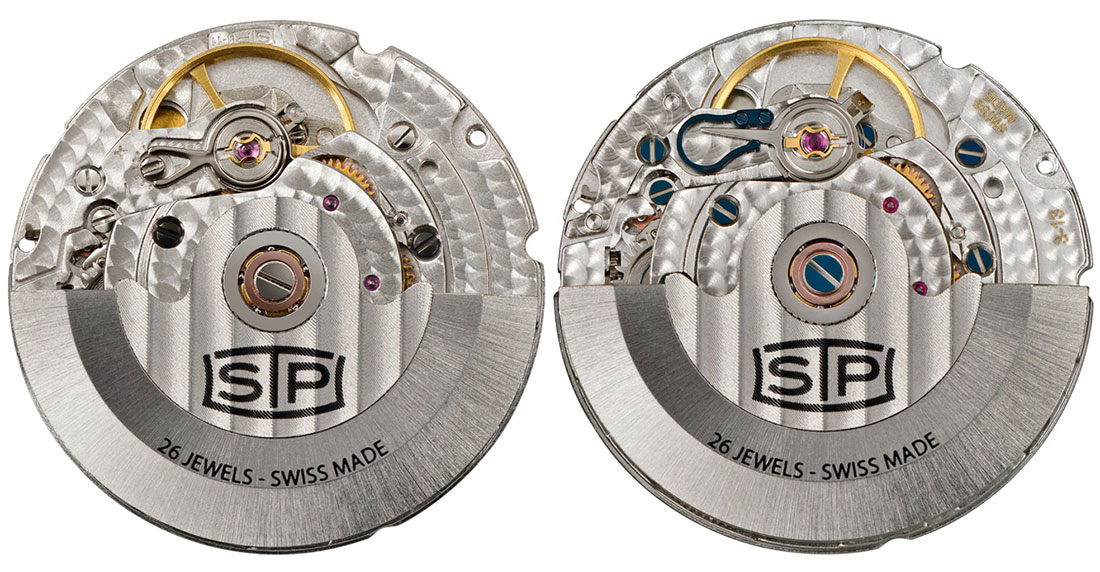 In the STP 1-11 movement (and others), you will see a small screw that is used for this, but the idea of a swan neck regulator, simply put, is that it allows for finer tuning. For the STP 3-13, there is a regulating lever that is held between the swan neck spring and a tiny (micrometric) screw that can “nudge” the lever ever so slightly …I’m doing my best to keep this concise! Anyhow, this is helpful because virtually imperceptibly small movements of the lever can affect the daily rate accuracy. 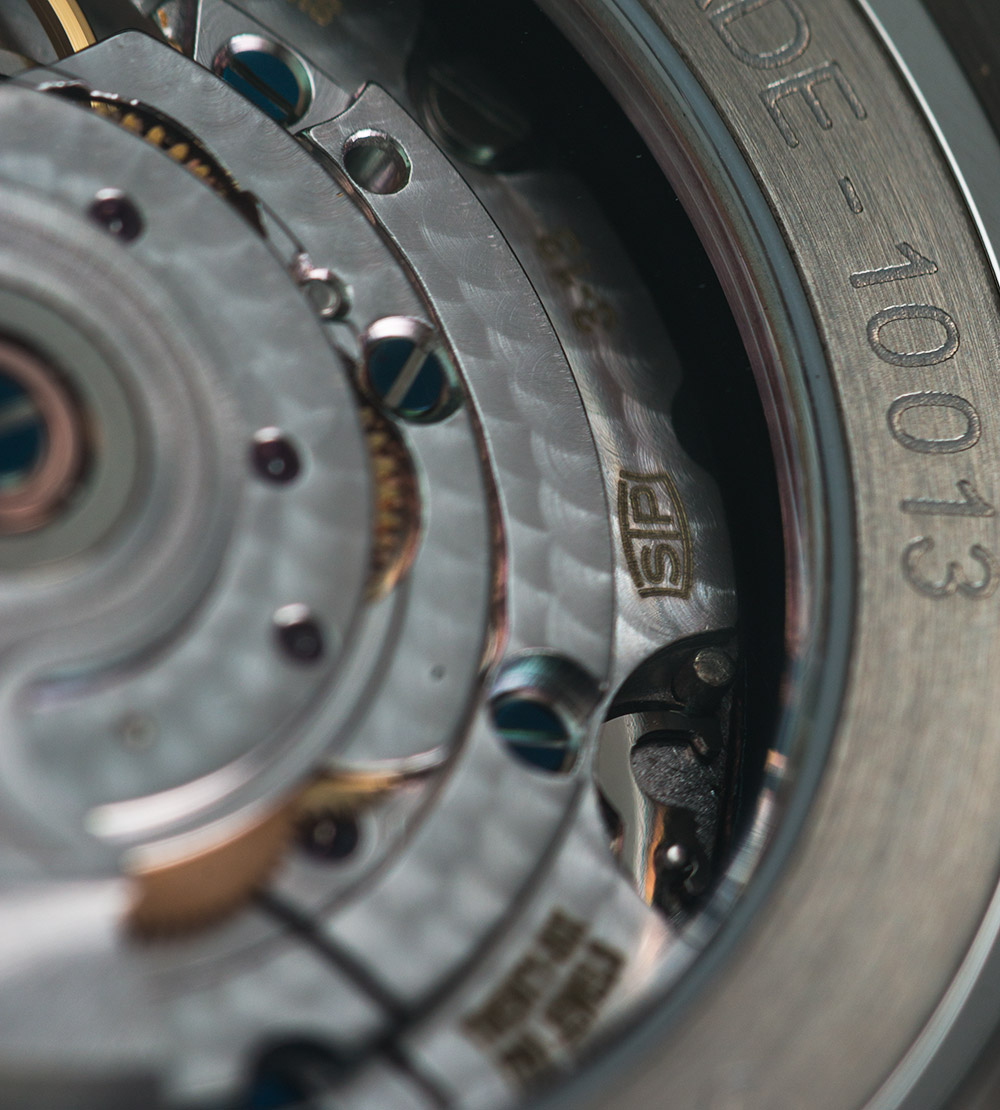 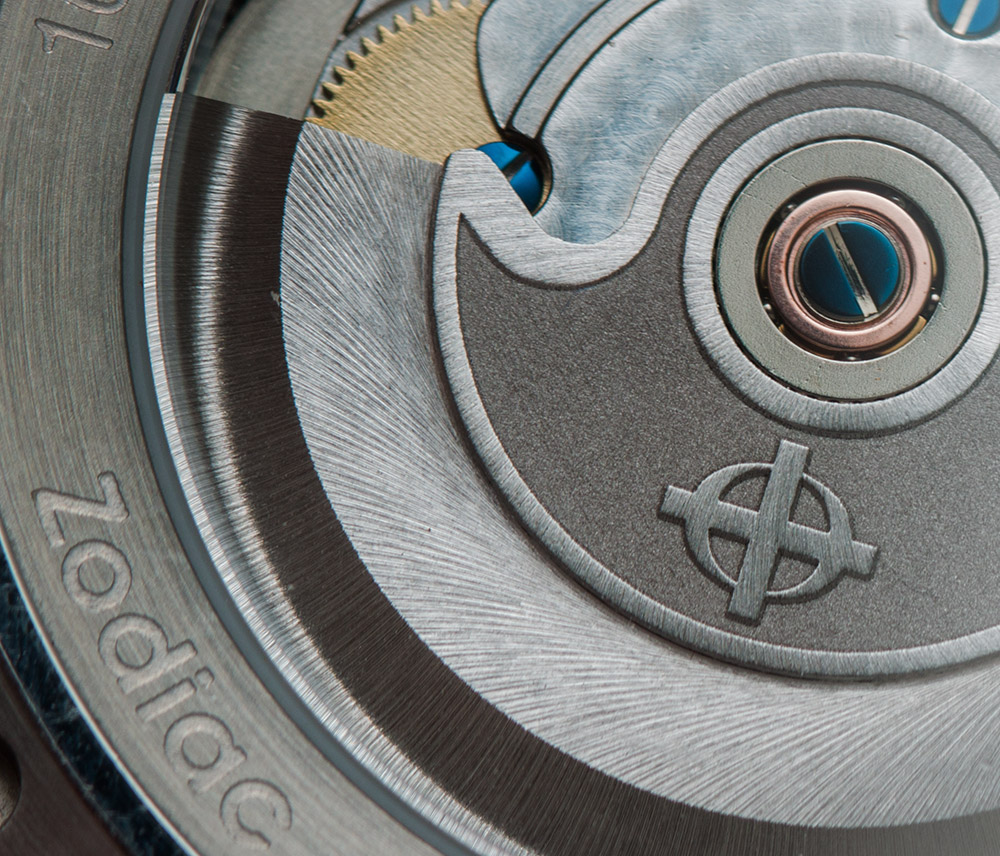 You may be asking, “what can a swan neck regulator do for me?” First, this system does not mean that the movement is more accurate, and STP does not claim any accuracy advantage in the STP 3-13 over the STP 1-11 movement without a swan neck system. It is a less “standard” feature, so people may associate it with “fancier” movements, but its function is simply to help a watchmaker do that part of his or her job. The STP 3-13 still has pretty typical specs for a movement with three hands and the date. For the user, even if it’s a bit gimmicky, the swan neck offers something interesting to look at and talk about – which is almost unheard of for movements at this price level, where so many watches contain the same few popular movements that you end up seeing over and over. And the swan neck’s elegant curve adds a welcome aesthetic element to the caseback view. 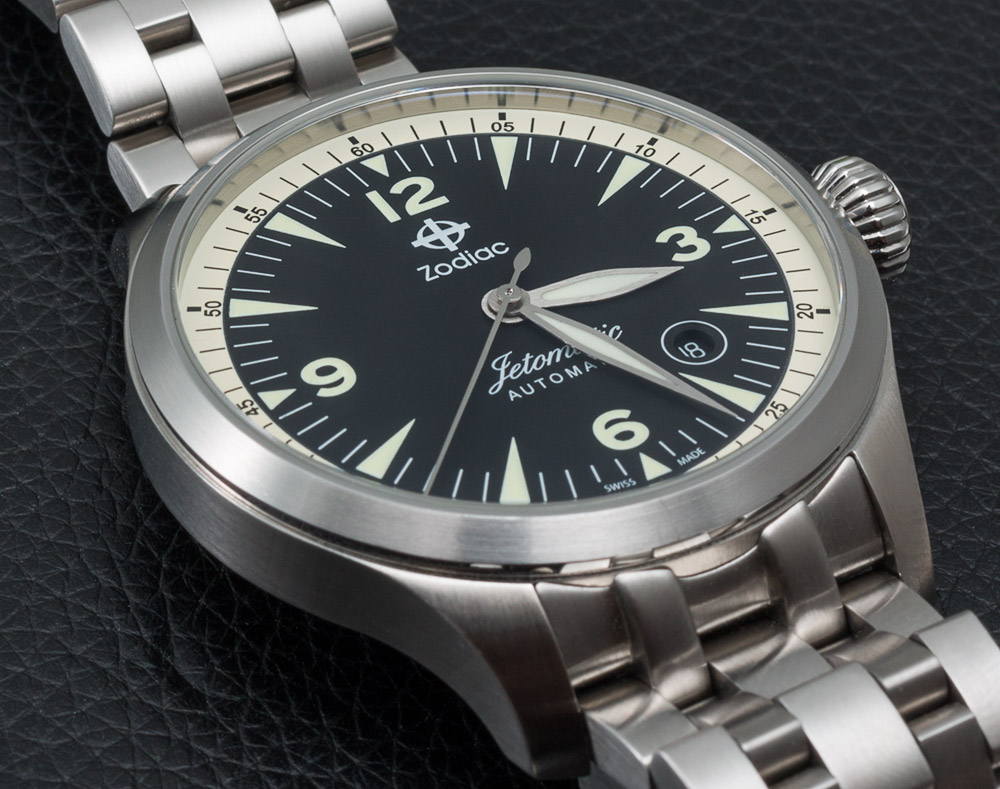 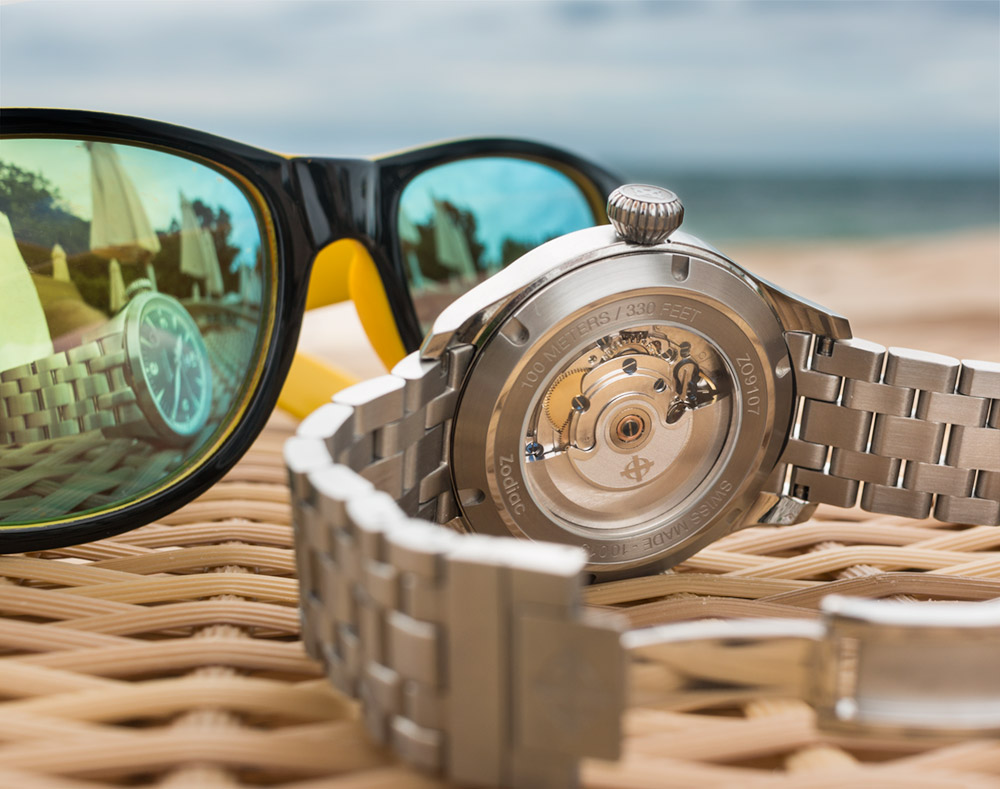 So that’s the swan neck. Stepping back but remaining at the caseback for a moment, the rotor with the Zodiac logo looks nice enough, but it is somewhat noisy. While not the loudest rotor I’ve encountered, the nature of its noise is mildly disconcerting, almost sounding like scraping and sometimes maybe even minor rattling. On a more positive note, the big, screw-down “onion-shaped” crown, a common pilot watch feature, is easy to grip and pleasant to operate with a solid feel when winding. Because one interacts directly with the movement with tactile feedback, the winding and setting experience is always an important part of any watch to me. 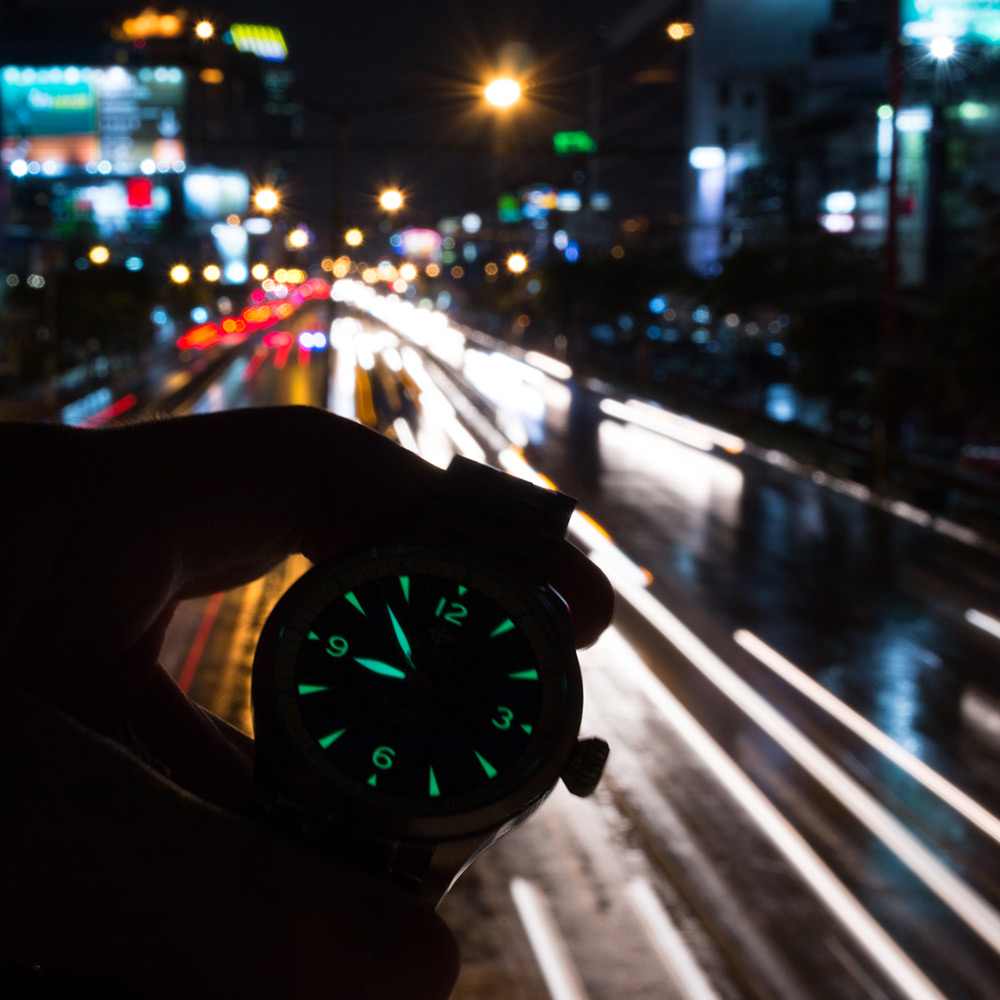 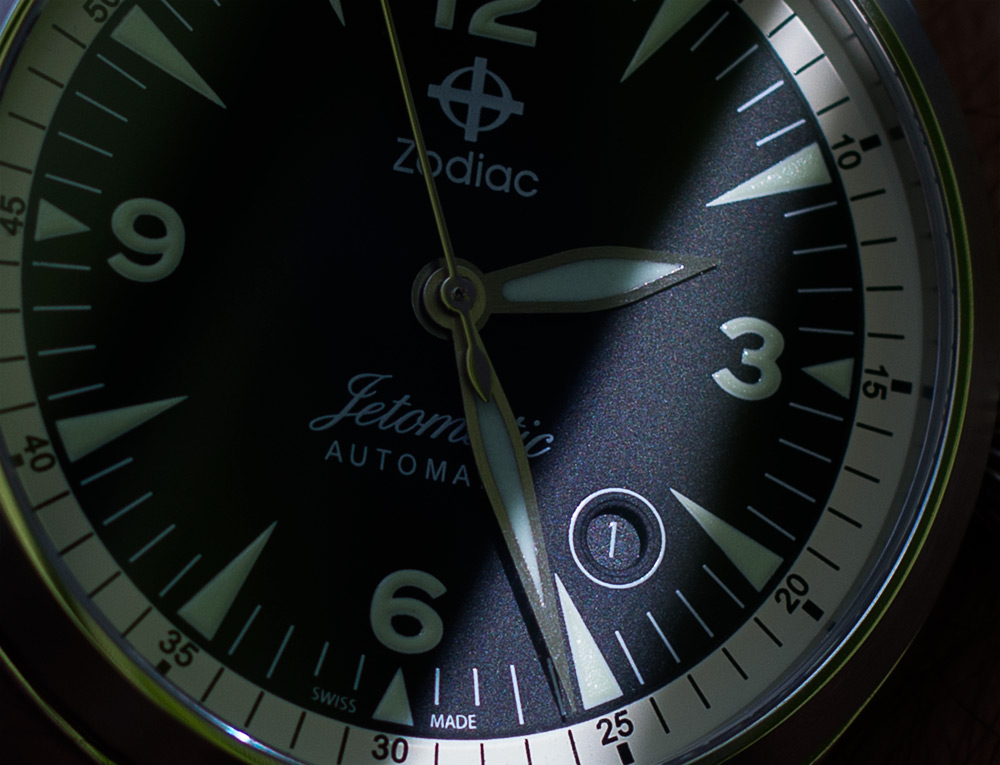 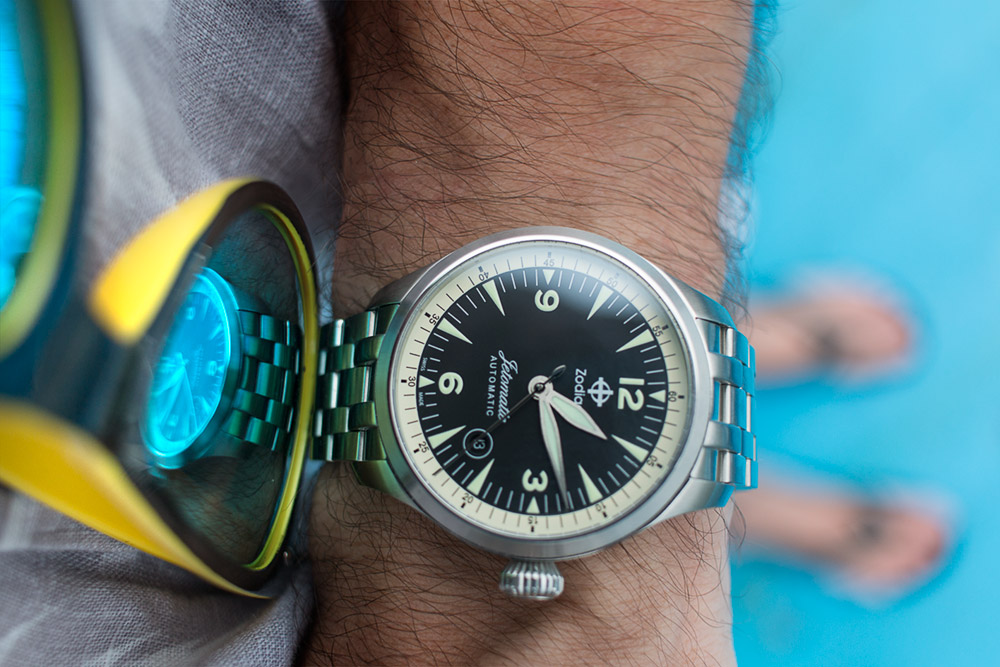 One thing that’s cool about Zodiac is that, despite being budget-priced and among Fossil Group fashion brands, they are clearly making products with enthusiasts or budding enthusiasts in mind. Looking at the Zodiac Jetomatic on my wrist as I type out this article elicits a couple different reactions. First, I enjoy its legibility and its straightforward, functional charm and that it is a pilot watch that doesn’t look like a lot of other pilot watches. The finishing and unusual feature of its movement are an additional treat for the price. But, on the other hand, the stark simplicity of the case and dial often made it feel as if merely equal to the sum of its parts, kind of like a micro brand watch even though Zodiac is a historic brand (founded in 1882) now owned by a giant holding group (Fossil). That niche vibe and personality might also add to its appeal, depending on your point of view. 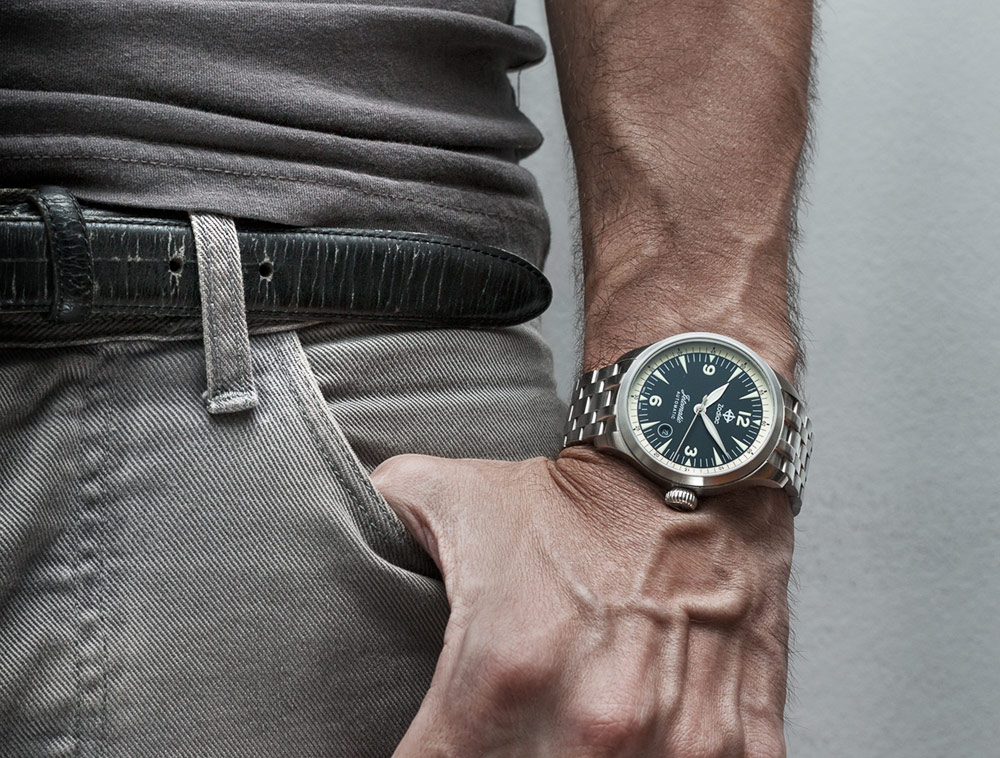 The Zodiac Jetomatic ZO9107 as tested is handsome and versatile, and it works well on its bracelet or a range of 20mm straps, from leather to NATO. It offers a movement that is unusual and worth talking about, which is rare for its price range and helps it stand out. The Zodiac Jetomatic versions on the bracelet (ZO9107 and ZO9108) have a retail price of $1,095 and those on a strap (ZO9105 and ZO9106) are priced $995 which, I believe, is the current lowest-priced Zodiac watch. zodiacwatches.com