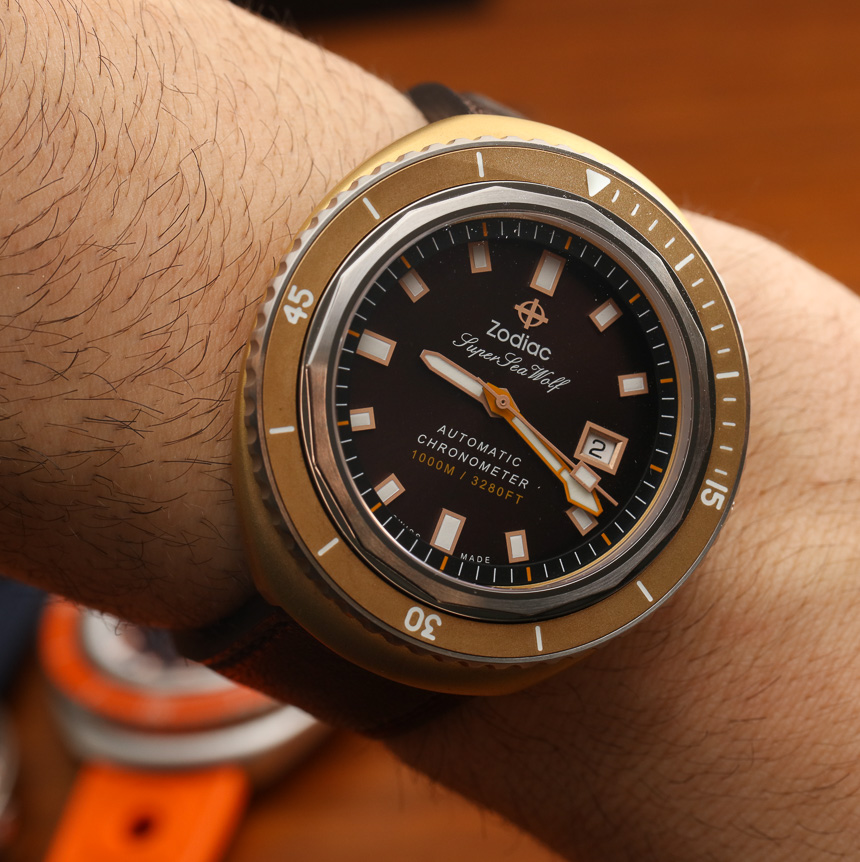 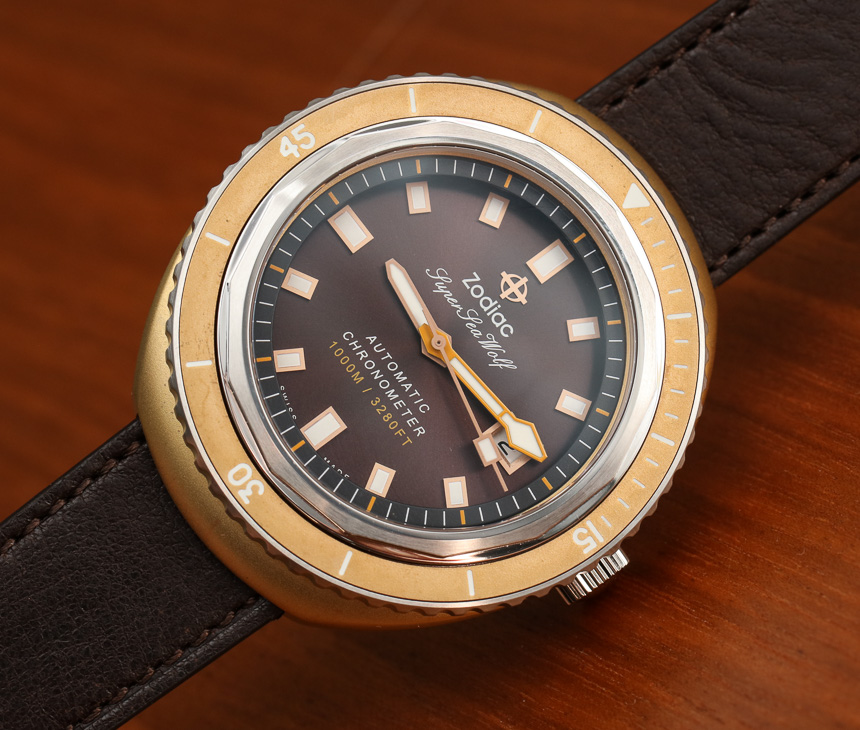 Zodiac‘s collection of vintage-inspired timepieces remains relatively similar for 2016 save for the addition of new variations and models. Perhaps the most novel Zodiac watch this year is the Zodiac Sea Dragon Chronograph. With that said, prior collections such as the Sea Wolf 53 Compression (reviewed here) and the Super Sea Wolf 68 (reviewed here), have some nice new line extensions along with various refinements and additions such as new straps and bracelets. Incredibly strong in quality and value, the Zodiac Super Sea Wolf 68 collection gets some sexy new colors as well as this limited edition Zodiac Super Sea Wolf 68 Bronze reference Z09505 watch. 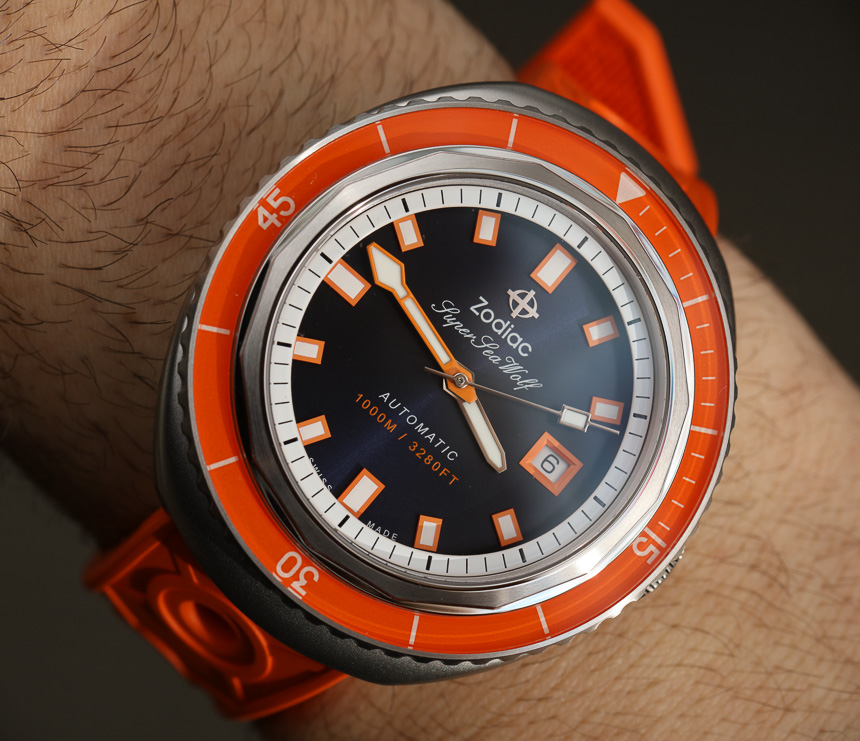 Bronze is a sexy metal these days, and Zodiac is by no means the only watch brand to debut a new bronze-cased watch at Baselworld 2016. Some of the biggest news of the show was the Tudor Heritage Black Bay Bronze. I will, however, say that the Zodiac Super Sea Wolf 68 is about half the price, is a limited edition, and is also the first bronze watch I’ve seen to also have a bronze rotating diver’s style bezel insert. Though, I think there are plenty of buyers for both Tudor and Zodiac watches alike. 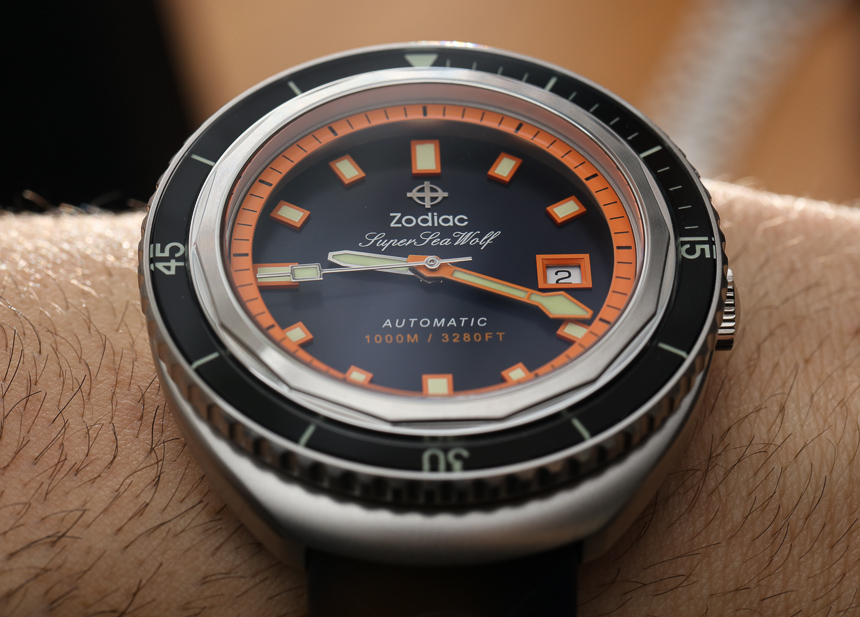 Click above to read more about the Zodiac Super Sea Wolf 68 watch collection in my full review article. Here, I’d just like to briefly discuss the new models. What is cool is how similar in both design and size these modern retro-inspired dive watches are to their historical analogs. Zodiac has an original late 1960s Super Sea Wolf, and it looks almost identical to today’s models. With that said, a modern Zodiac Super Sea Wolf is going to be a better watch in all respects from materials to performance. 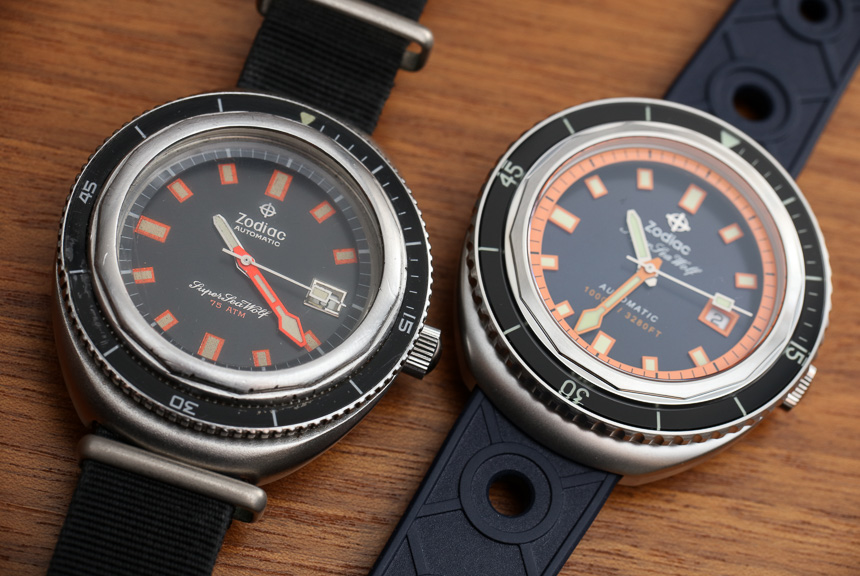 While most Super Sea Wolf 68 watches have steel cases, the Zodiac Super Sea Wolf 68 Bronze one of course has a bronze case, with a steel caseback. The bezel and crown are both in steel as well. Some people might not like this contrast, but I think it happens to give the overall watch a nice two-tone look. Bronze will of course patina over time, and no two bronze watches will patina exactly the same way. In addition to the warmth of a bronze watch’s color, the material also changes over time and ends up looking like some antique piece of boating equipment – which might be exactly what you want for a 1000-meter water resistant diving watch. 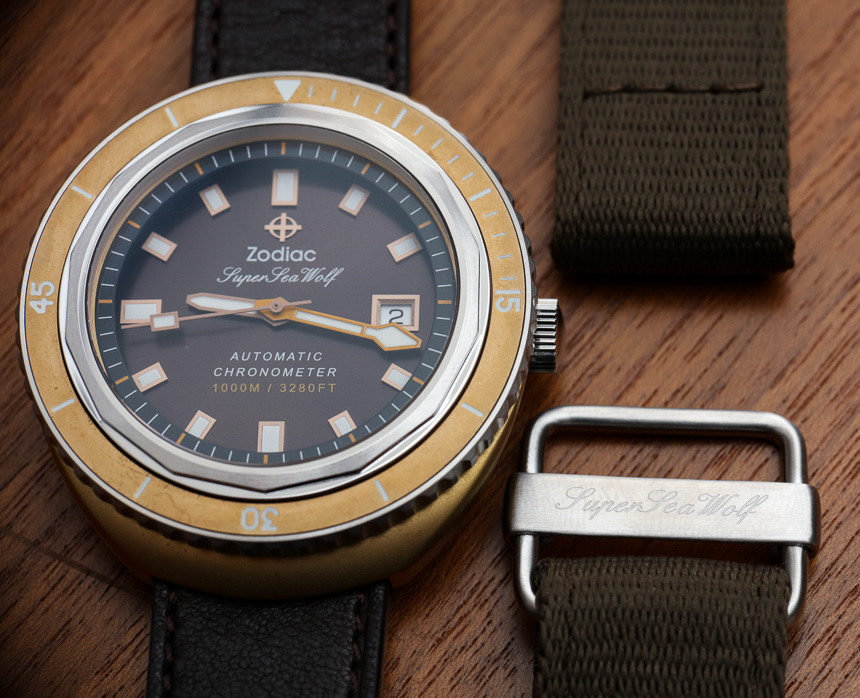 The tonneau-shaped bronze case is 44mm wide and very comfortable on the wrist. While most Zodiac Super Sea Wolf 68 watch models benefit from the soft and comfortable natural rubber strap or mesh metal bracelet, the limited edition ZO9505 Zodiac Super Sea Wolf 68 Bronze model comes with two different straps. One is a high-quality brown leather strap, and the other is a cool military-style green fabric strap that should look killer with the watch. Again, it is hard to see Zodiac not aiming its sights directly at Tudor. 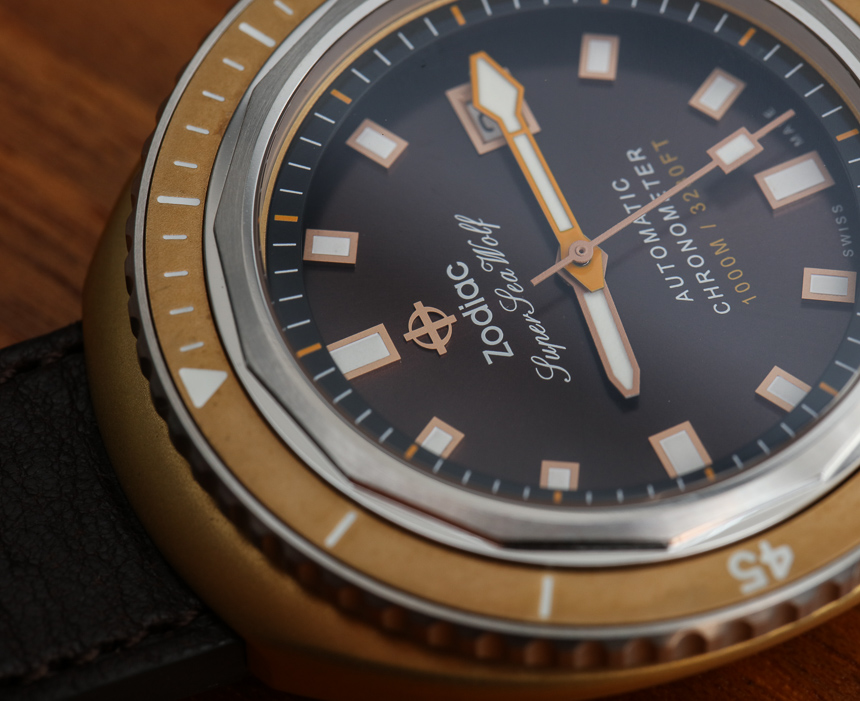 The bronze case has matching hour markers and hands on the beautifully clean and legible dial. The face itself is a sort of dark metallic brown which some people might call “chocolate.” I will call it… dark metallic brown. Because this is a limited edition Zodiac Super Sea Wolf, Zodiac takes the extra time (and money) to get its movement COSC Chronometer certified. Zodiac and parent company Fossil have an additional reason to offer these COSC Chronometer certified watches next to the collection of not Chronometer certified Zodiac Super Sea Wolf 68 watches – that, mind you, have the exact same movement. This is because Fossil Group has its own movement maker called STP, which makes the caliber STP1-11 automatic movement inside of the Zodiac Super Sea Wolf 68. More or less an ETA 2824-2 competitor, Zodiac uses limited edition models such as this to prove that the STP1-11 movements are good enough to be COSC Chronometer certified – which increases overall value for all watches with STP1-11 movement in it. COSC certification isn’t free, so it doesn’t make sense to certify all watches with STP1-11 movements in them because frankly, most consumers would not want to have that cost passed on to them. 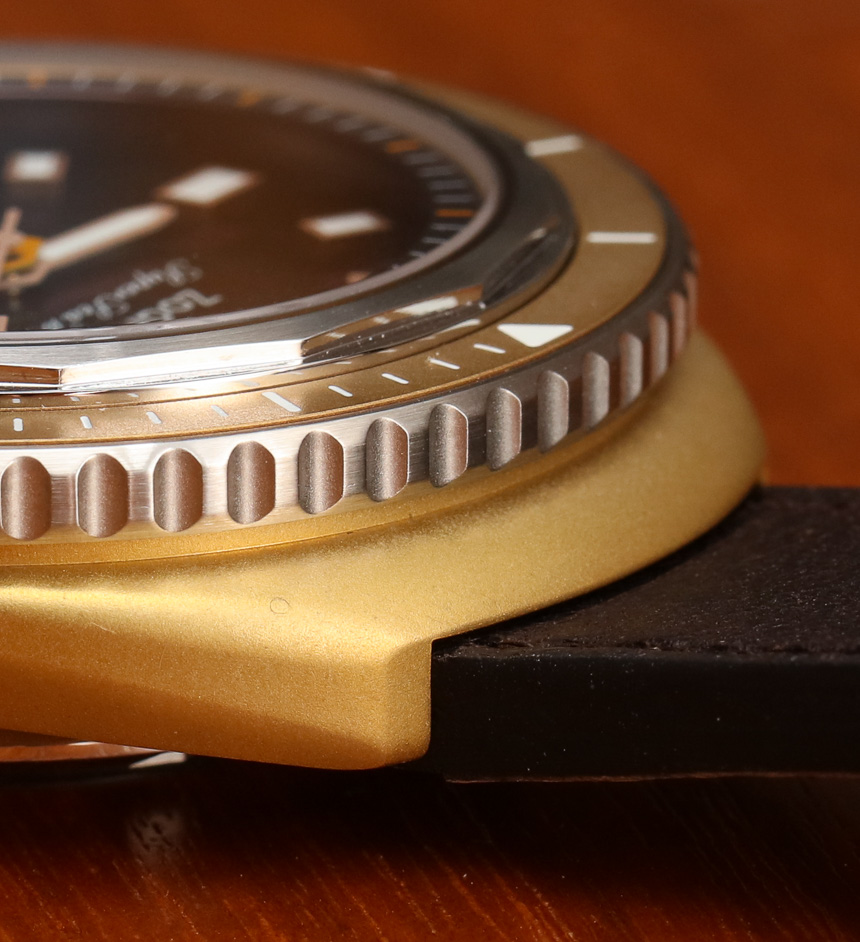 The STP1-11 movement operates at 4Hz with 44 hours of power reserve and offers the time and date. I’ve spent most of the article talking about the Zodiac Super Sea Wolf 68 Bronze limited edition (of only 82 pieces), but there are also two attractive-looking non-limited edition Zodiac Super Sea Wolf 68 watches with blue dials and varying degrees of orange. The almost all-orange model with the otherwise blue metallic face is probably my favorite Zodiac Super Sea Wolf 68 watch that the brand currently makes. If you want a large, comfortable, and super-easy-to-live-with watch…. that happens to be as visually loud as your modern running shoes, then look no further. As a summer watch in cities like Los Angeles or Miami, this is perfect… and, in my opinion, Zodiac really got the orange color right, making it bright without looking neon. It is like the color you really want all Orange fruits to be. 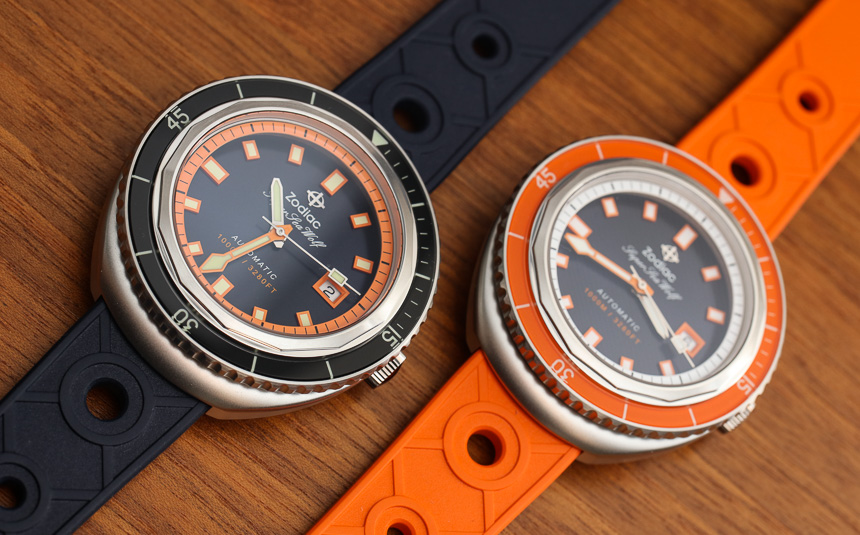 If you like the look of the all-orange model but think it is perhaps too orange… consider putting it on a blue rubber strap. Also, don’t forget that the Zodiac Super Sea Wolf 68 watches have rotating diver’s bezel that must be pressed down a bit in order to turn (as a “safety mechanism”) and that they are topped with mineral crystals which makes them just that much more interesting looking. Over the dials are sapphire crystals, of course.