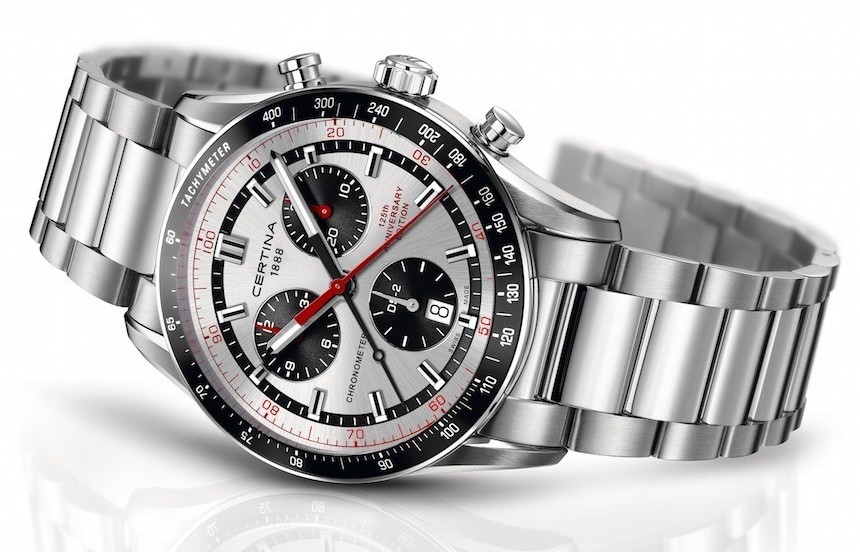 Recently, Certina has equipped some of its DS-2 series of watches with its PreciDrive high-end quartz movement and sent them to battle for a slice of the slowly but surely expanding high-end – or, if you like, high-accuracy – quartz watch segment. There are myriads of different requirements a watch is rightfully expected to meet, but if it is to justify its price tag, it must do at least one of two things. It must either be a truly fine example of what has gone before, or it must possess a saleable quirk into which the marketing department can sink its fangs. We’re used to seeing whimsical novelties in the field of mechanical watchmaking, as each year, tens of millions of dollars or more are poured into the discovery, production and refinement of new materials and mechanisms in search of an edge over competitors. Designers are charged with re-imagining classic concepts to generate a slither of market separation.

Meanwhile, a significant portion of the lower-end of the luxury market remains underpinned by the ever-faithful quartz movement. As they say, “you can rely on a quartz, because it never changes,” and “you know exactly what you’re getting, as quartz has been pretty much the same for years…” Well, that is by no means entirely true, as proven by the collaboration of Swatch Group members ETA and Certina. The PreciDrive from ETA is a quartz movement able to achieve chronometer-like accuracy, and while it may not be a new release exactly (it’s been around for about a year), it deserves attention for the effectiveness of its thermo-compensation mechanism, for the novel way it incorporates ceramic components into its design, and that it offers 1/100th of a second accuracy at a relatively attainable price point.

However, before we discuss the finer details of what makes the PreciDrive notable, let’s focus on a particularly interesting model that features this movement. The Certina DS-2 Limited Edition is a chronograph in a 41 millimeter wide 316L stainless steel case: aesthetically, it is identical to the other Certina DS-2 watches in the series, save for its attractive “panda-dial” coloring. The dial is mostly silver, with black, snailed sub-dials and a pad-printed red scale marking the 100th of a second read-out. The 12-hour and 30-minute sub-dial hands are also red, along with the split seconds indicator – always a nice touch (and the sign of an intelligently designed watch!) when the chronograph hands are matching and thus separated from the time keeping elements of the watch. The simple and classic color palette is suitably sporty – a characteristic enhanced by the dynamic function of the watch. The incredible speed and processing power of the PreciDrive means that the split seconds indicator hand hits every single 100th marker during the space of one second. This is a different phenomenon than one might see on a mechanical split second chronograph. In a mechanical watch, the split second hand is effectively free-wheeling at the correct velocity before being suddenly braked when the stop pusher is depressed. In the PreciDrive, the split seconds hand is making one hundred distinct and accurate motions per second; even more impressive, however, is the reset speed of the hands. The advanced micro controller called PowerDrive is capable of shifting the hands up to as many as 200 times a second in either direction, meaning they return to zero almost instantaneously.

Visiting scarcely visited territories in watch-nerdism, we will say that the reason this new micro-controller has a built-in flash memory is to enable it to display multiple combinations on the various counters. It can be hard to get excited about quartz movements, because there is so little actual movement to speak of, and the physical ‘magic’ of watchmaking is reduced to an invisible calculation inside the silicon brain of an integrated circuit… But when you actually analyze what’s going on inside that brain it becomes quite fascinating.

Certina has vacuum sealed the quartz crystal and the integrated circuit in a ceramic case, protecting both components from the effects of moisture. Additionally, the integrated circuit is able to measure the quartz crystal’s temperature. This is important in terms of achieving Chronometer status, because quartz, just like the balance spring and wheel in a mechanical watch, functions differently under the influence of temperature. Fortunately, the output of synthetic quartz is highly predictable and the integrated circuit has been programmed to adjust the timekeeping accordingly, depending on the operational temperature of the crystal. Certina boasts on their website that this thermo-compensation makes their PreciDrive movement 20 times more accurate than a standard quartz, equating to an average chronometric error of just +/-0.07 seconds per day (+/-10 seconds per year). This watch is a member of the Certina DS (Double Security) family. The DS concept requires all of its watches to posses a scratch resistant sapphire glass, an O-ring gasket on the stem, 2 more O-rings in the crown, a reinforced case back, and a ‘specific’ case back gasket. I’m not sure what makes a case back gasket any more ‘specific’ than any other case back gasket – I mean, it is not likely one would find a watch anywhere in the world with an ‘unspecific’ gasket fitted – but at least it suggests it fits, which is, well, reassuring.

The case back is closed to hide the quartz movement and improve water resistance, but it is decorated with the Certina Turtle logo in high quality relief. You may find the logo a bit cutesy, but I think it is pretty cool, especially when executed so boldly. The Certina DS construction makes the watch water resistant to 100m, which is a welcome feature on any watch, especially something that appears to be intended for use under more demanding circumstances. The Certina DS-2 Limited Edition version shown above also features the product number engraved on the case back and comes complete with an official COSC certificate and display case.

Although the speed of the PreciDrive recalls the footwork of Certina’s one-time ambassador Muhammed Ali, this is a movement designed to endure the rigors of the modern era and beyond. It may not stand atop the world, but it should ensure Certina continues to punch well above its weight for some time yet to come. Price for the Certina DS-2 Chronograph Limited Edition with PreciDrive movement (reference C024.448.11.031.00) is $1,050. certina.com