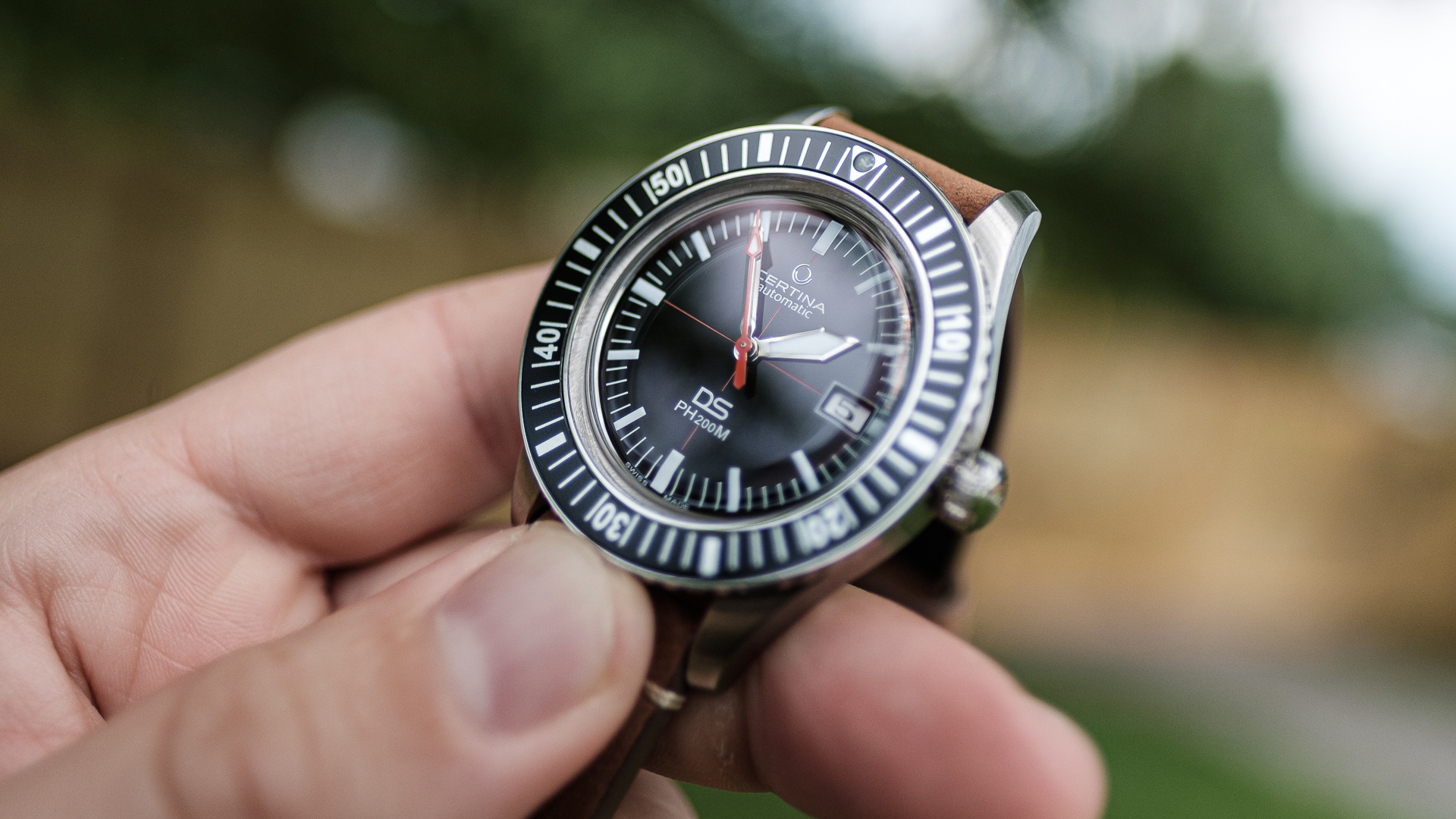 In 2018, Certina released a watch at Baselworld that immediately caught my attention. The Certina DS PH200M is a vintage reimagining of the classic dive watch under the same name. Now, Certina may not ring a bell in the States, but it has a rich and deep history firmly cemented in serious dive watches. The DS (for double security) collection of watches debuted in 1959 and quickly developed a reputation for quality. Watches from Certina accompanied the first exhibition to summit the 8,167m high peak of Dhaulagiri in western Nepal; the DS collection also played a pivotal role in the Navy’s Sealab-II project. Later, the DS-2 PH 500M model was part of the Tektite experiments, wherein scientists spent months under the surface of the ocean while being observed by NASA. A Certina watch even summited Everest in 1970. 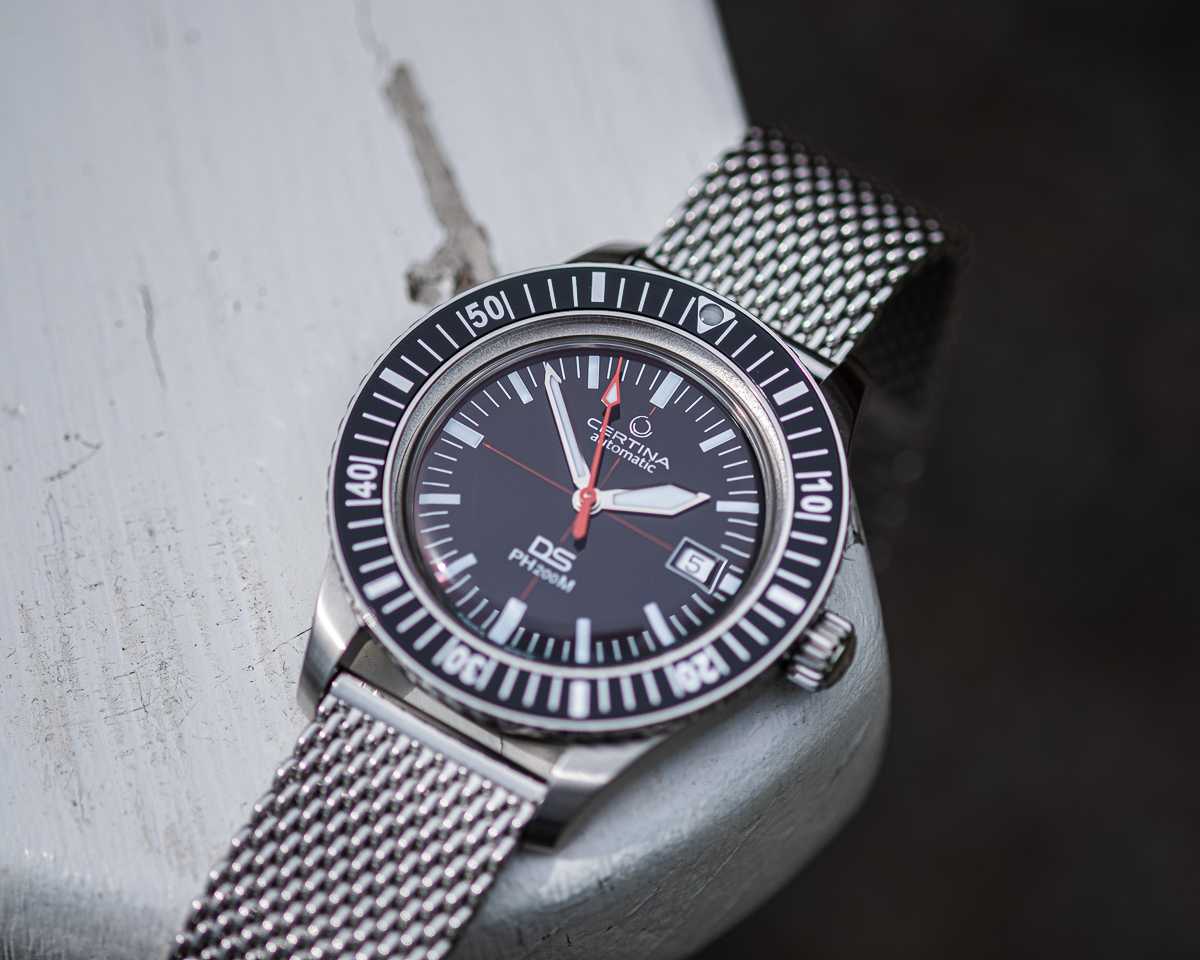 The particular vintage reissued Certina that we are looking at today draws its inspiration from the dive watches of the 1960s. It has been modernized by a modest size increase and some contemporary internals, but a lot of what makes it look like watches of yesteryear remains intact. At a glance, the watch elicits a feeling of Caribbean oceans and aqua water. The Certina brand itself has, for the most part, ceased its marketing to the U.S. market, but hopefully, the popularity of a watch like this will help expand that some. Anyway, enough waxing poetic, let’s get on with the review. 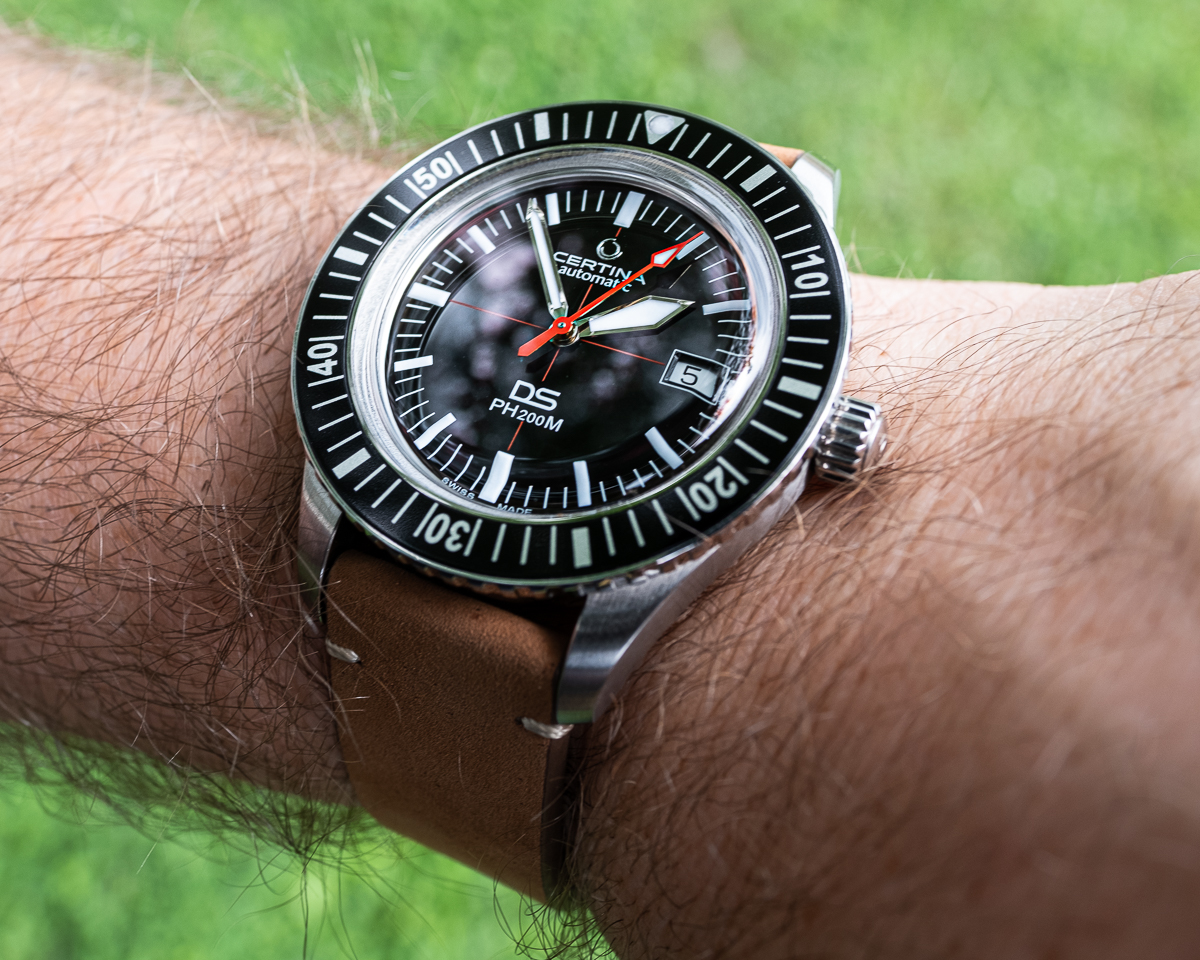 The 42.8mm stainless steel case used for the Certina DS PH200M features an entirely brushed finish across all surfaces. The lugs are straight with crisp transitions along the edges. The 6mm signed crown is polished and jimped to provide an excellent grip when setting the watch. Flipping the watch over, you’re treated to a very well done caseback. The most prominent feature is the turtle, meant to symbolize the strength and toughness of this watch. (Certina has been using the turtle shell logo since the 1960s.) Surrounding the turtle is a matte-finished pattern that reminds me of propeller or fan blades. The combination of finishes and relief engravings gives this caseback a very striking appearance. 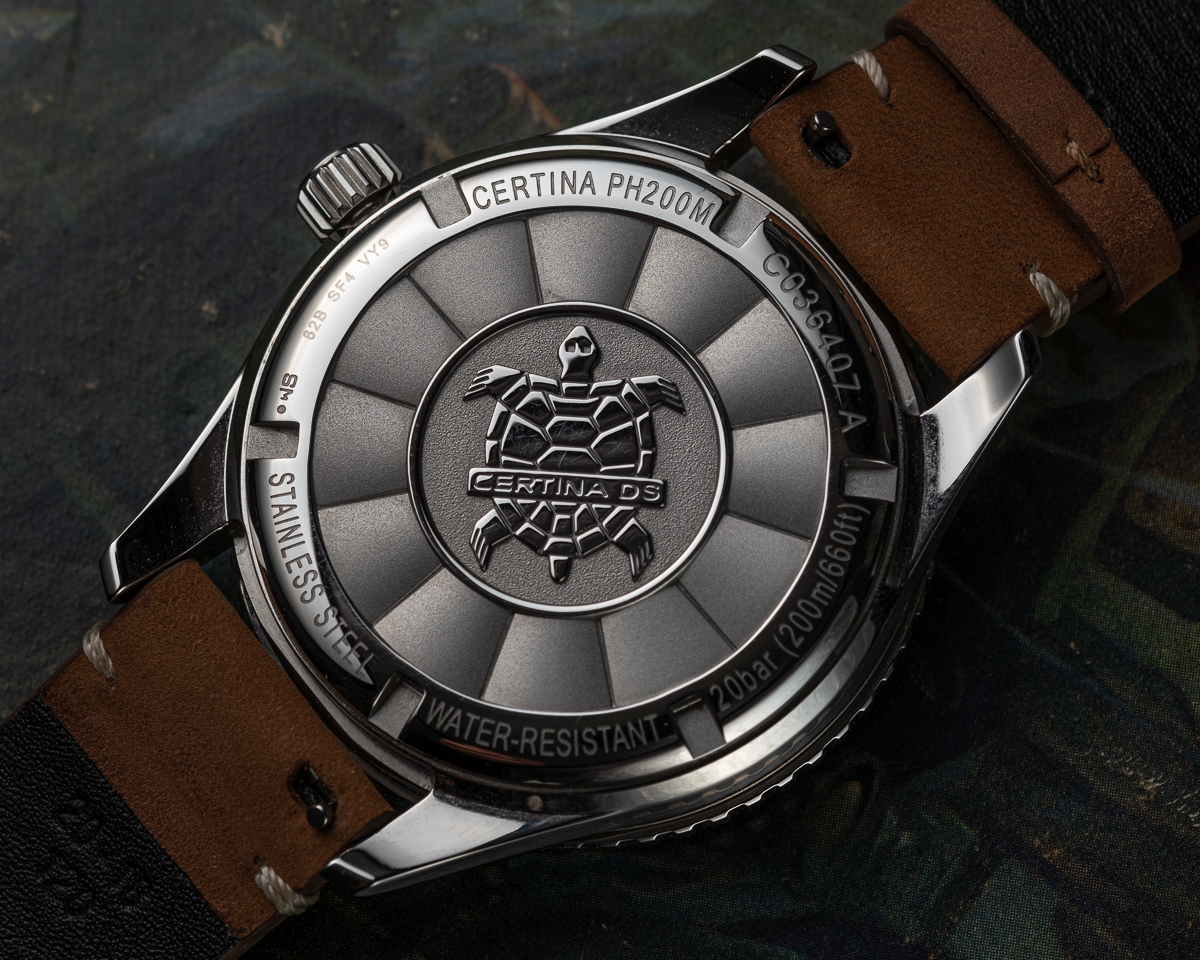 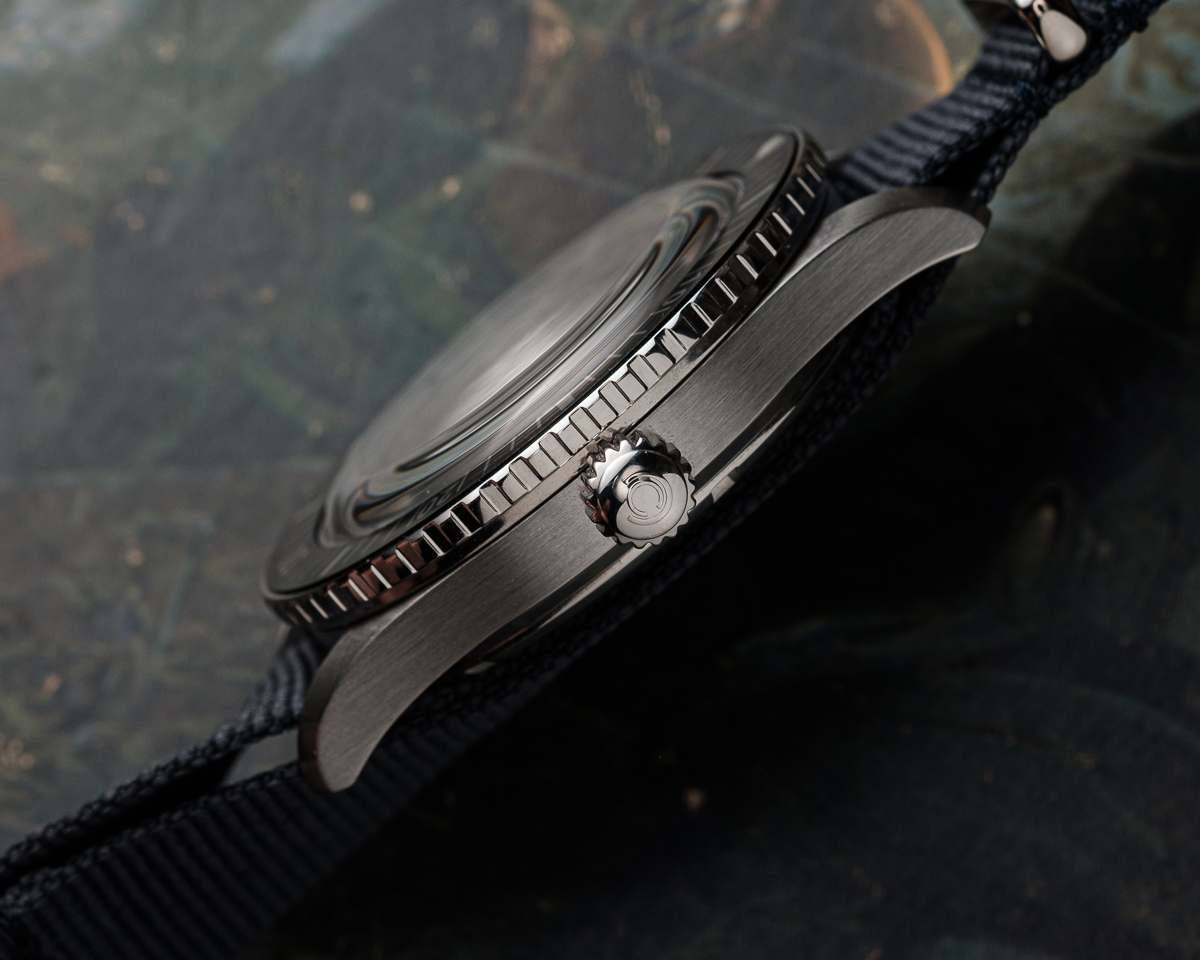 One thing worth pointing out is the concept of Certina’s “DS” or Double Security system. Certina states that the DS system is made up of four elements: a sapphire crystal (which this watch doesn’t have), an O-ring seal on the setting stem, two o-rings on the crown, a “special” seal in the caseback, and a reinforced caseback. It’s a neat system, but it’s something we see variations of elsewhere. Certina has been using the Double Security moniker since the late ’50’s, so I have to guess that its inclusion here is merely traditional to some extent. 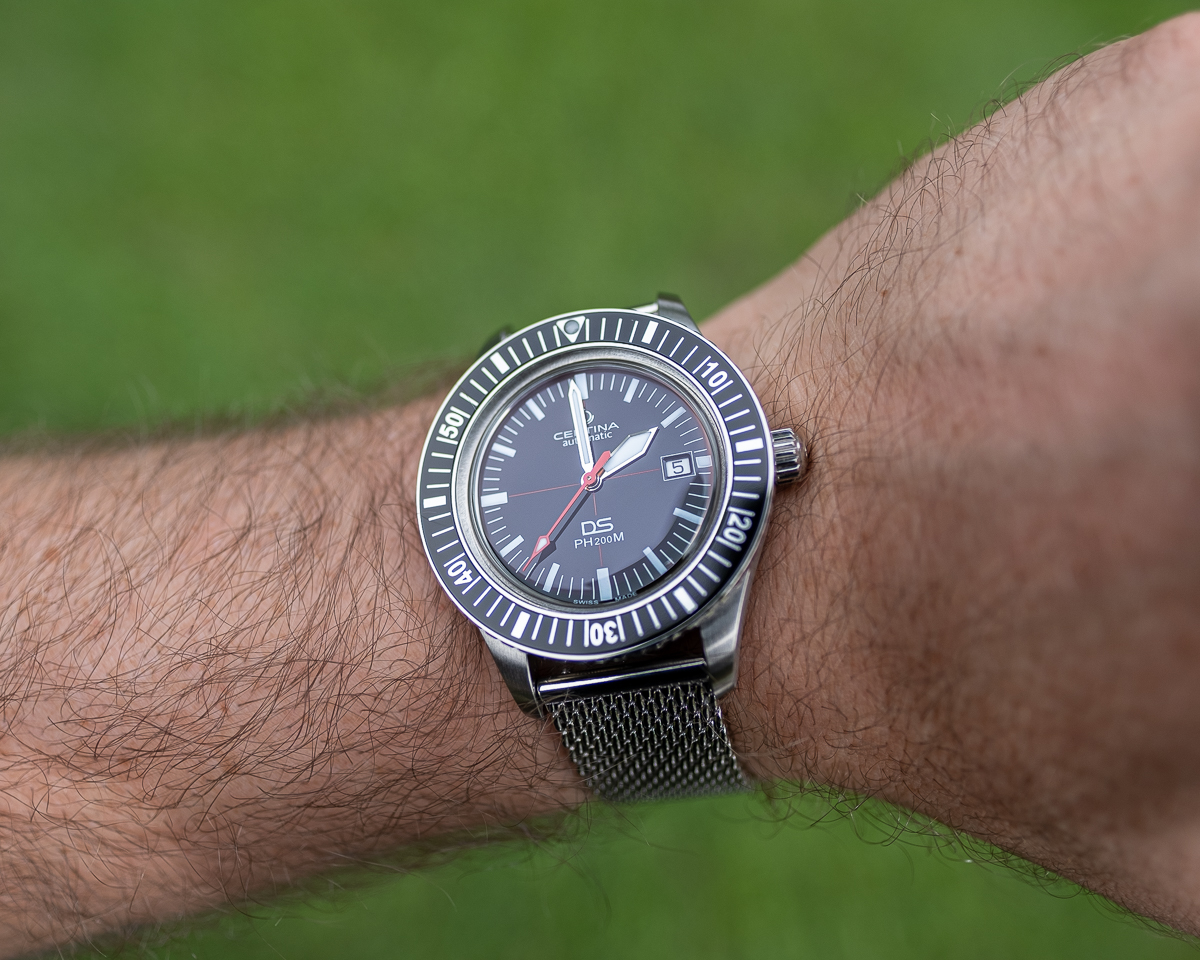 One of the more exciting elements to the Certina DS PH200M is the use of the Swatch Group’s Powermatic 80 movement. As the name suggests, this movement boasts an impressive 80-hour power reserve. So, in a practical application, you’d be able to take your watch off on Friday evening and have it still keeping time on Monday morning before work. These movements are becoming increasingly common in some of the higher-value prospects from the Swatch Group — primarily within Tissot, Hamilton, and now Certina. In my day-to-day use, the movement has proven very reliable and accurate. 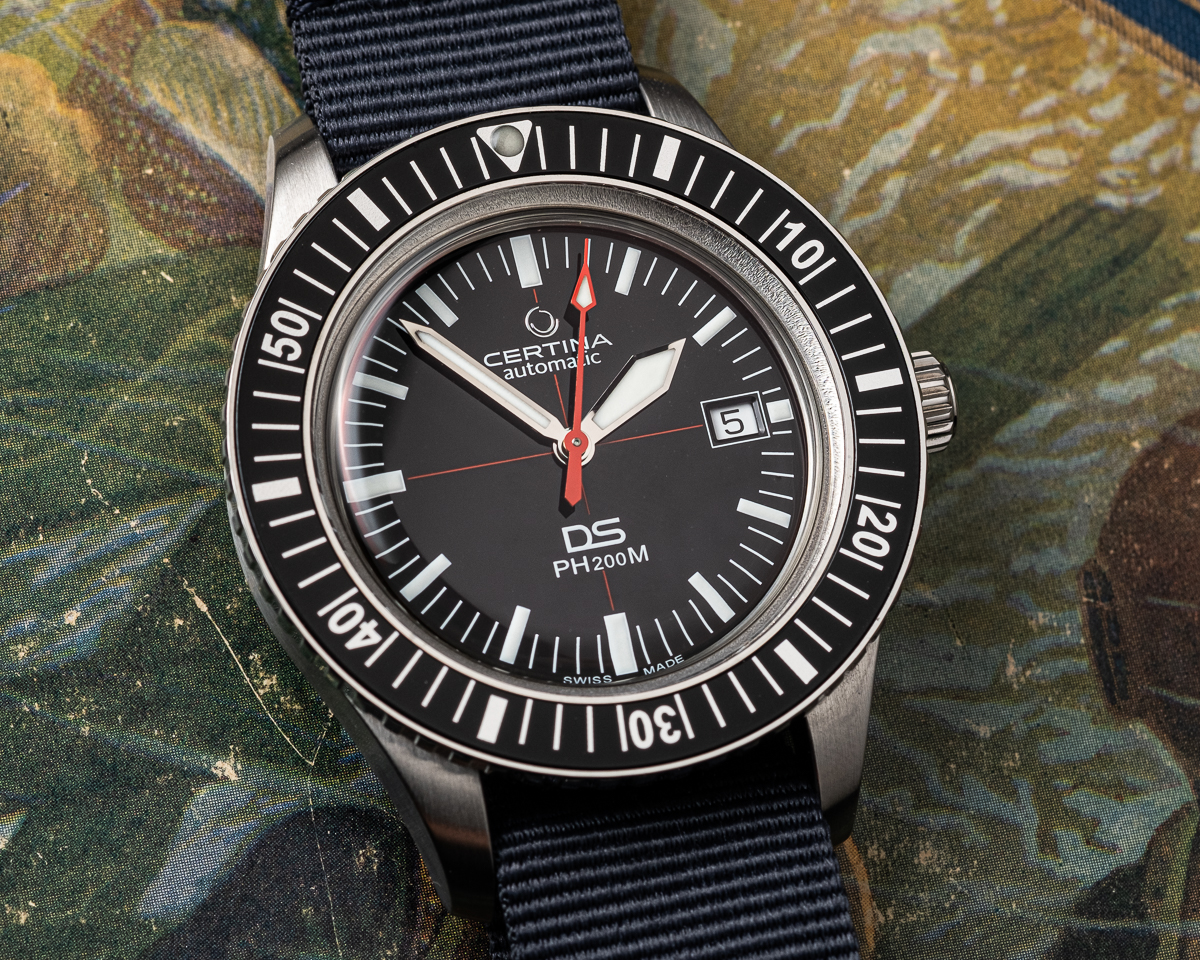 The Dial on the PH200M is a glossy black dial with painted lume plots separated by simple minute dashes. The hour and minute hands are polished sword hands with an ample application of Super-LumiNova. While not specified by the brand, I believe this is BGW9 lume, as it retains a pure whiteness in the daylight but glows with blue luminescence. I’ve found it to be easily read in the dark, and it keeps its glow for a good while coming in from the bright sunlight. It’s cool to see blue lume used, as well. 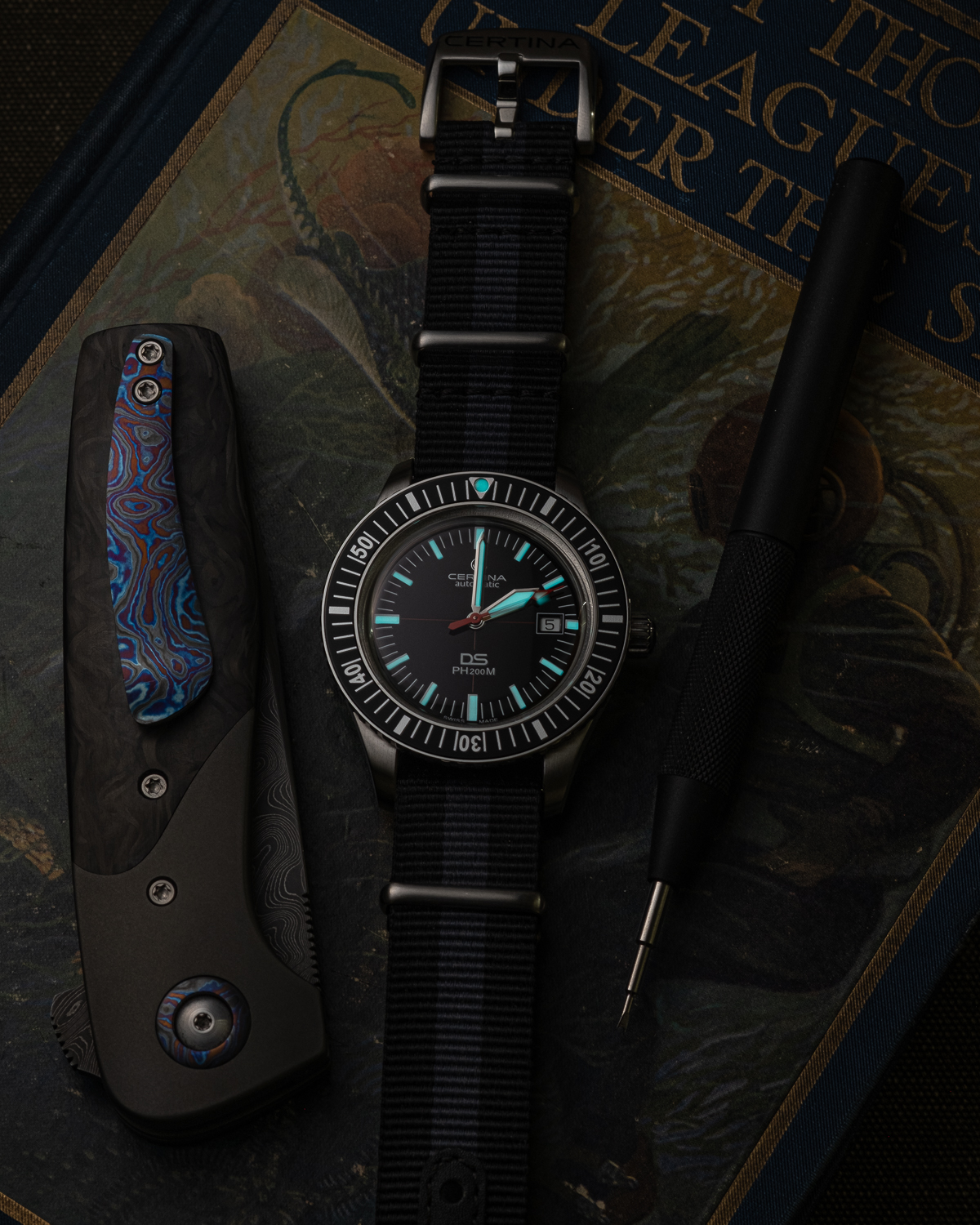 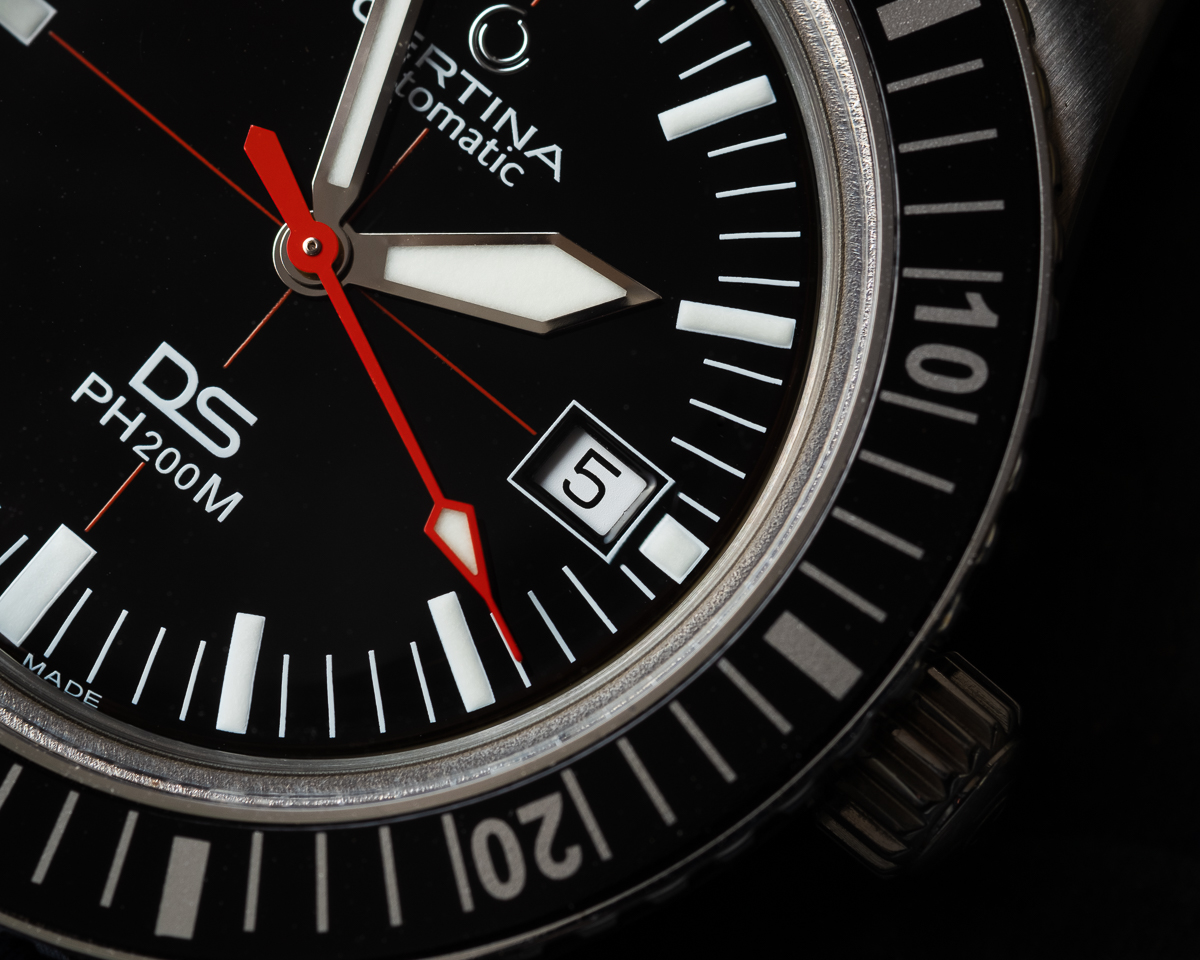 At 3 o’clock, you have a small date window showcasing a white-backed date wheel. This may prove to be a little jarring to some folks, but it does make the date easier to read at a glance. You’ll also see a red line bisecting the dial vertically and horizontally. This “crosshair” motif gives the Certina a pretty serious vintage watch vibe. 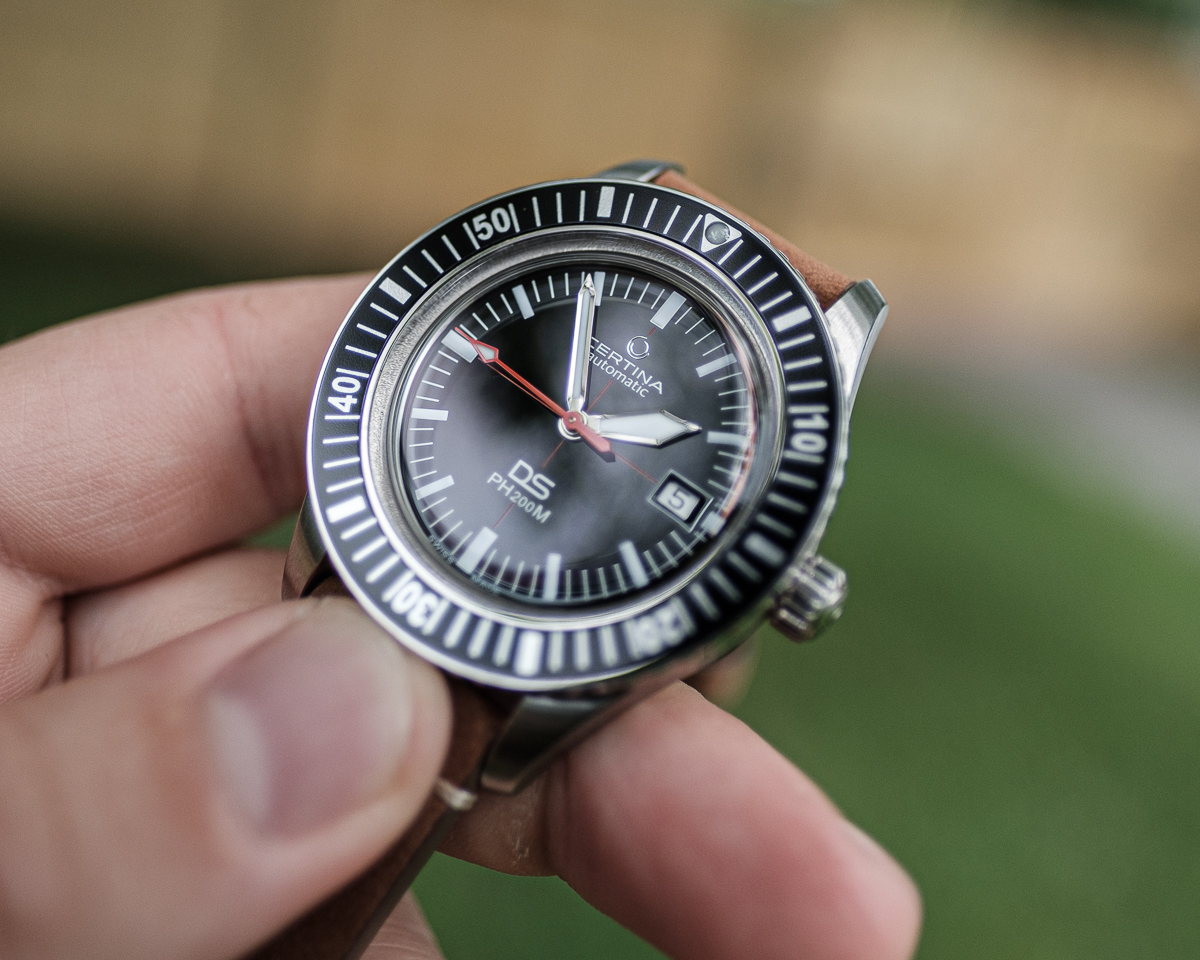 Lastly, the crystal is an amply domed acrylic crystal that solidifies this watch in the “heritage reissue” family. The acrylic creates some stunning reflections across the dial. In my day-to-day wear, I’ve really enjoyed it. Certina states that the crystal is treated with a “Nex scratchguard treatment.” From my experience, the crystal has resisted any severe damage. As with any acrylic crystal, over a long enough time this watch will also need some Polywatch — so it’s good to be prepared for that. 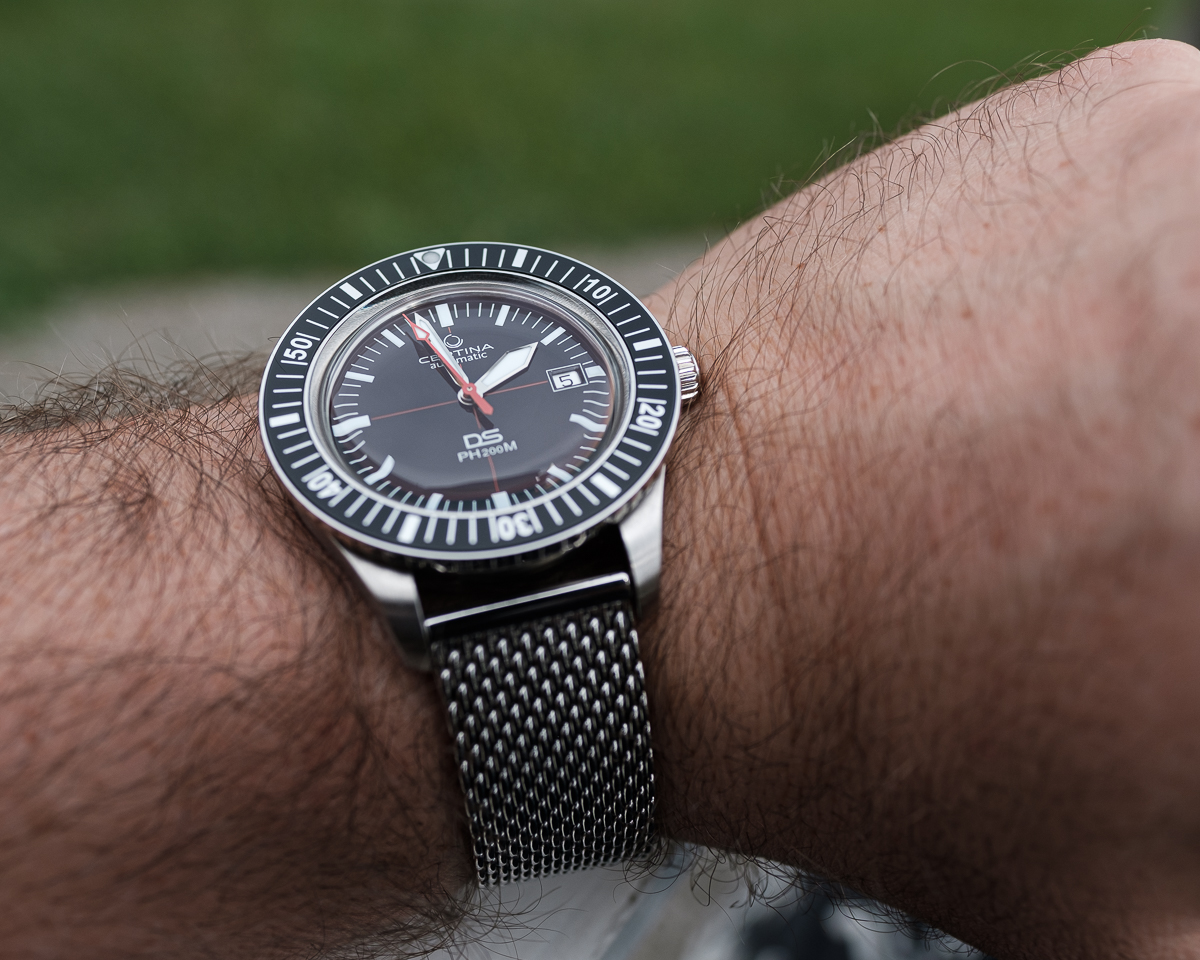 Certina sells the DS PH200M on several strap options: a soft brown leather, two different NATO colors, or a steel mesh bracelet. These are all pretty nice, but the bracelet really stands out to me. It has the right amount of articulation and really gives the watch a classic look. I also found it very easy to adjust, which isn’t always the case with split pin bracelets. 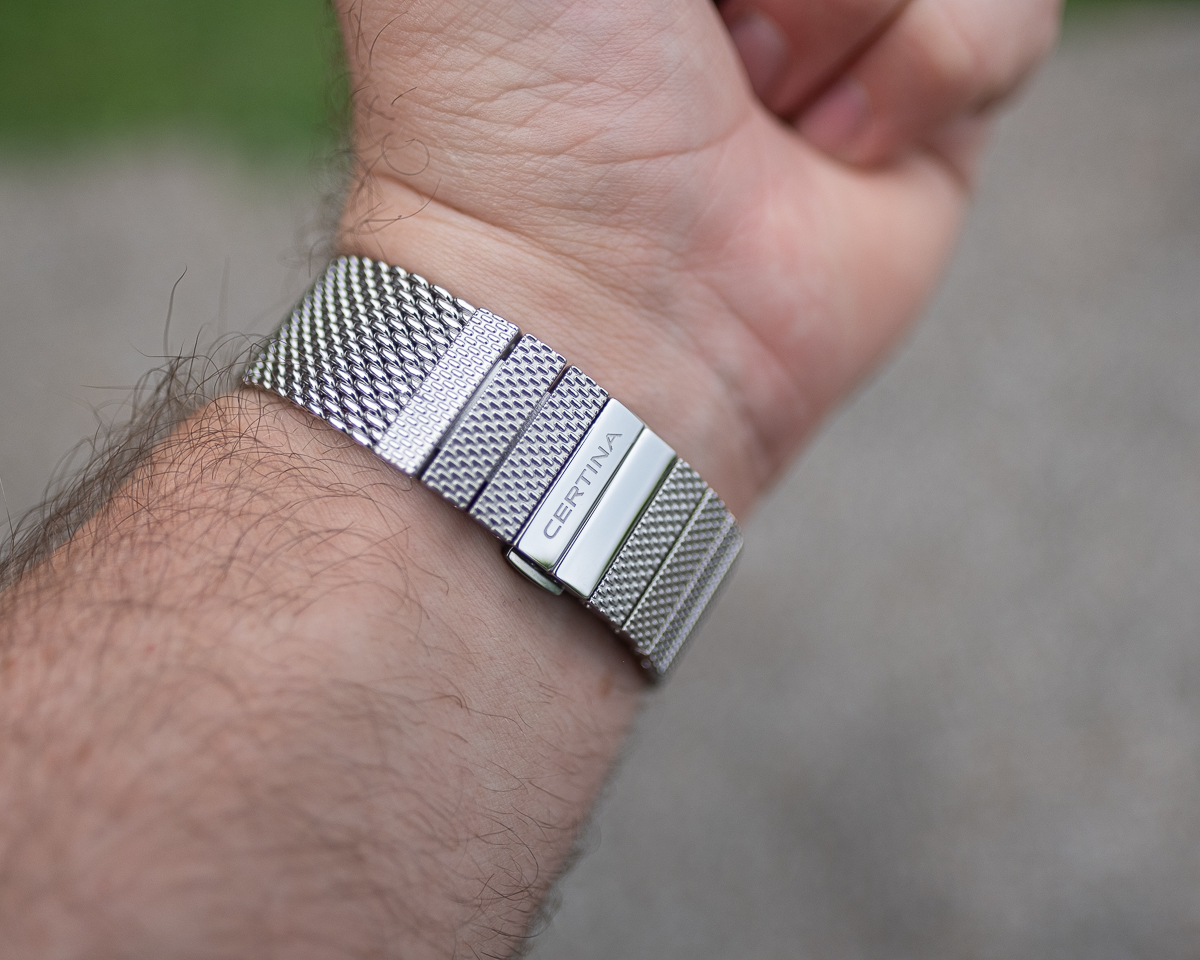 The Certina DS PH200M is advertised to be 42.8mm in diameter. It’s also 51.8mm lug-to-lug and 13.5mm-thick by my calipers. The original vintage Certina that this watch is based on was around 40mm, so this has been upsized for more modern tastes. On my roughly 7” wrist, it fits nicely and rides low. 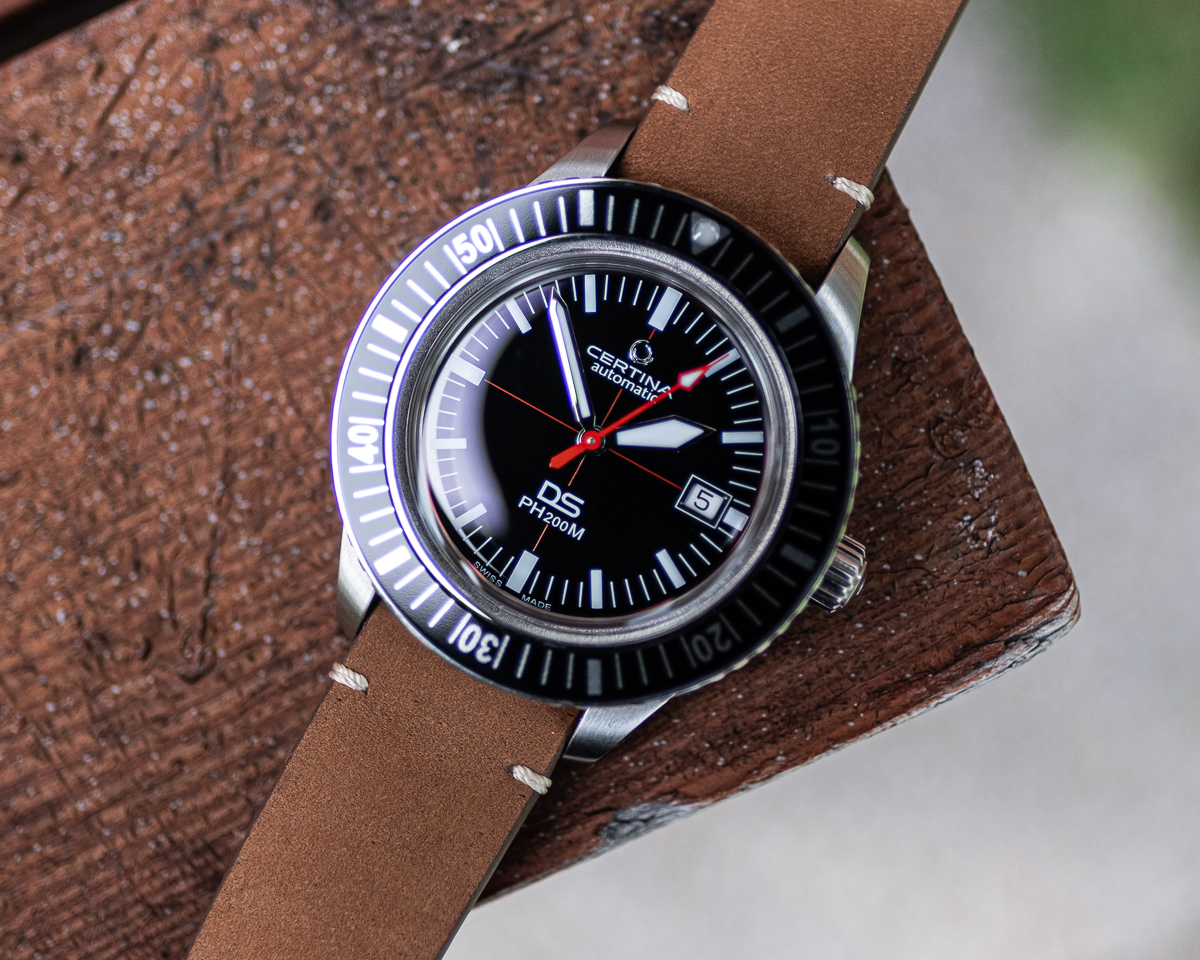 One competitor is the Halios Seaforth, priced at just under $700 and available in a variety of configurations. This is an excellent direct comparison; the trouble you’ll have is availability. The Seaforth was only made in limited quantities, and Halios is fresh out.

Next up is the Longines Legends Diver: It’s a bit more money at $2,400 and would be a good step up from the Certina. The Longines is a compressor case-styled diver, so you have to be into that.

Lastly, you could look at some of the newer Prospex releases from Seiko; something in the SBDC051/3 family or the SBDC061/3. These are priced at around the $600-$800 mark, depending on which model you choose, and would be a good option, as well.

The sub-$1000 price bracket offers a lot of options, the above being just a small sampling. That said, I think the Certina DS PH200M is a strong contender against the competition, with one caveat: It’s not openly available for the U.S. market. Certina did offer one suggested retailer here, but your mileage may vary there.

To round this review out, I want to say that I’m a big fan of this watch after spending a couple months with it. The Certina DS PH200M is priced at $780 on the NATO with a leather strap and $840 on the steel mesh bracelet. This is an excellent value, in my eyes. You’re getting a nicely styled heritage-inspired dive watch with a proven ETA-based movement and a beautifully designed acrylic crystal. The styling is on point for my taste, and I believe pairing this watch with a few different straps will give you a wide variety of looks. For any more details and information, please check out certina.com.

Necessary Data
>Brand: Certina
>Model: DS PH200M
>Price: $780 on Nato and Leather, $850 with the mesh steel bracelet
>Size: 42.8mm
>Would reviewer personally wear it: Yes!
>Friend we’d recommend it to first: Anyone looking for a very classic vintage-style diver.
>Best characteristic of watch: The acrylic crystal and polished hands.
>Worst characteristic of watch: It wears big for what feels like a vintage watch. That might dissuade some folks from picking one up.