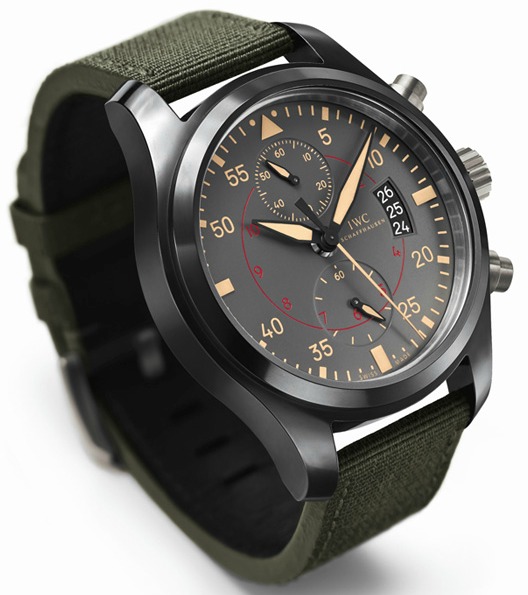 Hitting pretty close to home (for me) IWC announces its first new watch of 2012 with a piece titled after the location of a US Marine Corps base in San Diego. Miramar is the location of the Naval Air Station and where TOPGUN pilots are trained. For a while now IWC has been proud of its Top Gun labeled aviator watches and 2012 sees the continuation and extension of that collection.

According to IWC 2012 is going to be the year of the pilot watch for the brand. It seems as though their new strategy is to focus on  specific product families each year. Last year IWC focused on a major refresh of their Portofino watches, and the Pilot collection gets all the attention this year. One of IWC’s most popular models is their Big Pilot watch, which should also see a notable addition this year.

To tease the entire collection that will soon be released at SIHH 2012 IWC has released information on the Pilot Chronograph Ton Gun Miramar. It houses a brand new in-house made movement (which will be a part of other new Pilot watches), being the caliber 89365 automatic. The new fly-back chronograph measures 60 minutes, has the date, and has a really large power reserve of 168 hours. For this model they wanted to have a more simple bi-compax layout, but I hope the new movement can accommodate a 12 hour chronograph (which I think is better for pilot uses). IWC uses both in-house made movements and those sourced from places like ETA. Movements from ETA aren’t as prestigious but tend to be extremely reliable and robust. Sources have told me that IWC has had some issues in the last few years with their own movements in terms of repair and reliability. While their movements looks really good on paper, my hope is that quality is very high on their list for the new calibers that we will see. It is true that while the new Pilot watches are to be debuted very soon, IWC will still have a few months to work on them before the full commercial release.

The Pilot Chronograph Top Gun Miramar will sport a full ceramic case. Done in a semi-gloss, the case will be a large 46mm wide. The pushers and crown along with the Top Gun engraved caseback are in titanium. Many have complained about the size of the watch as being too large. Actually, IWC has indicated that almost across the board all of its Pilot watches will increase in size. Personally I don’t mind this as I like large watches. The last few years people have claimed that smaller watches are now in and large watches are out. That shift attempt was an epic failure as I predicted. Brands tried to produce and market smaller watches with limited success – and are now reserving smaller sizes for select formal watches. Big sport watches are still king when it comes to what men seem to want. Now for some thoughts on the design. I needed to sit on this one for a while. My initial thoughts were that IWC has created the world’s most impressive prop watch for those wanting to outfit a Vietnam-era military costume. The dial design with green textile strap and dark gray case is almost cliche as a military accessory. IWC was really going for a theme watch here and they succeeded. Is it a new classic with the ability to go on 1000 different types of wrists and look good with a 1000 outfits? I am not so sure about that. The charm of IWC’s previous Pilot watches was their durability in design and style. The Top Gun Miramar watch is so specific in its identity that it might look out of place much of the time. Though I could be wrong.

I am also getting a bit weary of retro style aviator watches that are totally new but attempt to look old at the same time. A good example of this is the sand colored lume on this piece. For a long time now brands use this to look like lume which has aged over time getting a darker patina. It doesn’t really need to be there and they do it for style. On some watches I love the look (especially when it clashes with black), but against gray and green I have yet to see how it appeals to me. I’d need to see the watch in person to decide. There is also the matter of the red hour indicator ring. This inner ring of hour numerals is very much part of pilot watch history. Though the red colored ring offers less than optimal contrast against the gray face of the watch. Then there is the “open” date window. I am not a huge fan of these and IWC almost pioneered this look with their previous Top Gun watch that had the “T window,” incorporating both the day of the week and the date.

The green strap is meant to go with all those olive green bags, jumpsuits, and other items that we associate with military pilots. It is another style-related item. I guess that is the biggest virtue of the watch and my biggest problem with it. IWC has tried so hard to offer a cool looking military-inspired Pilot watch, that it ends up looking like it was put together by a designer versus something that naturally would go on a Top Gun pilot’s wrist. Those looking for a high-end fashion accessory will likely find this to be a very cool watch. I have no doubt that in the right setting and with the right outfit this is gonna be a stellar looking piece. Though by definition it has trouble existing alone. It is part of a theme, a look, a style. To be a serious classic it must holds its own in a vacuum. I’ll be sure to check out this piece along with other new IWC Pilot watches soon.