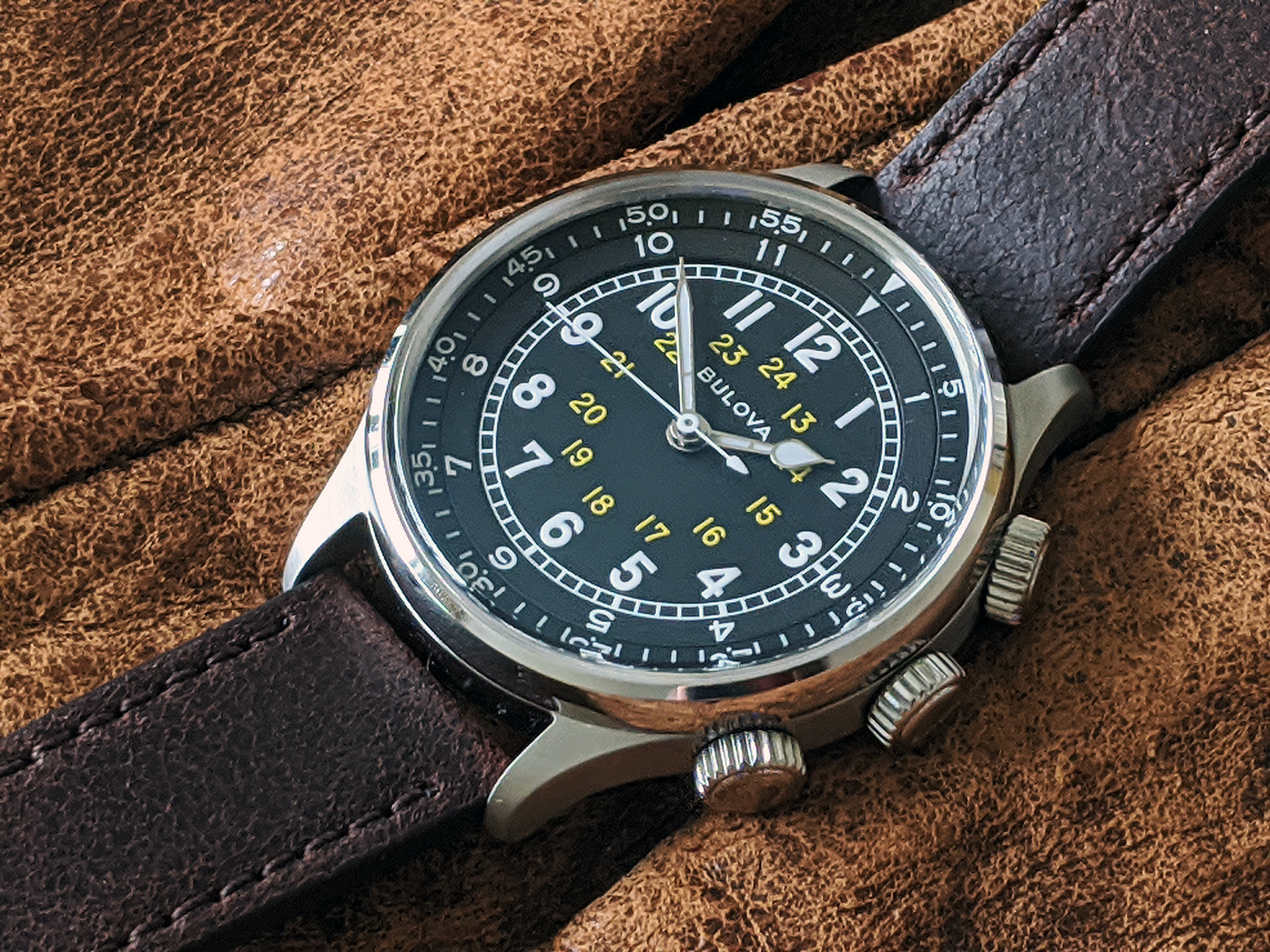 The history of American watchmaking is long and often forgotten in today’s age of Swiss dominance and multinational conglomerates, but the United States has a proud horological legacy of its own. One of the most prominent names in that history is Bulova, founded in New York. While Bulova hasn’t manufactured in the U.S. for many years, the brand continues to honor its American legacy with offices in New York City and a raft of various vintage reissues over the past few years. The latest of these, and one of the first in the new Military Collection, is the A-15 Pilot. Designed as a revival of an original Bulova U.S. Army Air Forces-issued watch from 1944, the A-15 Pilot is an attractive, affordable option for those who love the piloting ethos and sporting practicality of WWII-era flight watches without the potentially onerous undertones of the more widely known Luftwaffe-derived flieger styles. In addition, the A-15 Pilot offers some unique added functionality that sets it apart from the pilot watch pack. 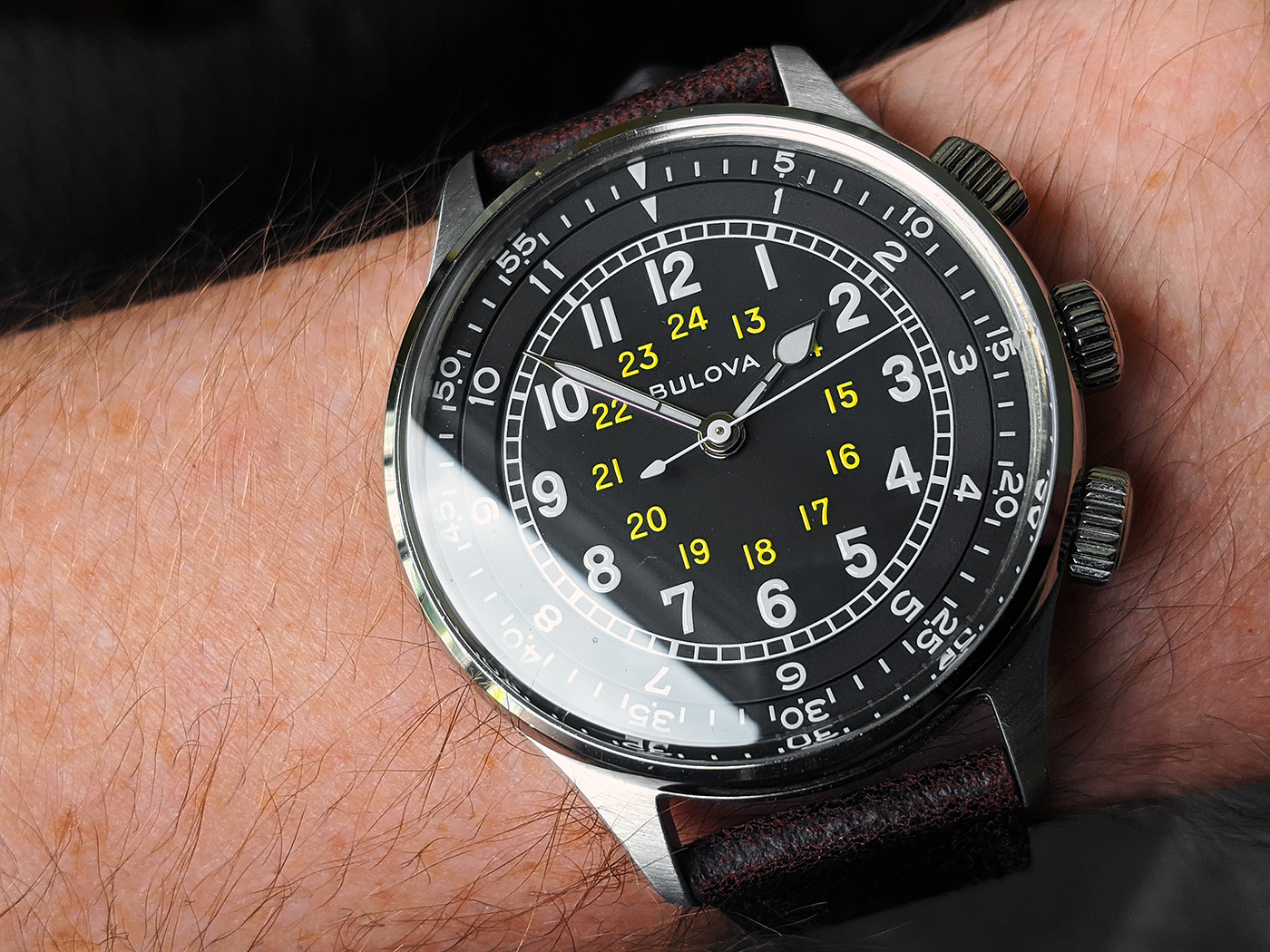 The case dimensions of the Bulova A-15 Pilot are deceptive. By the numbers, this stainless steel case measures in at 42mm, but the extremely narrow bezel leads to an “all dial” appearance that reads visually more like a 44mm case. While there’s no doubt the watch takes up a lot of visual real estate, it’s far from unmanageable thanks to short, sharply curving lugs. Also helping matters is the mirror-polished bezel, which adds a handsome bit of visual contrast to the brushing of the main case along with effectively masking the 14mm height of the case on the wrist. It’s a form that wears low, flat, and wide, with a fitting vintage military feel to it. What immediately draws attention about this case, of course, are the three crowns at 2, 3, and 4 o’clock. The A-15 has not one, but two rotating internal bezels, one each for both hours and minutes, and if the case were any smaller this could run the risk of feeling crowded. The other minor downside to the A-15 Pilot’s case is a water resistance of only 30 meters. 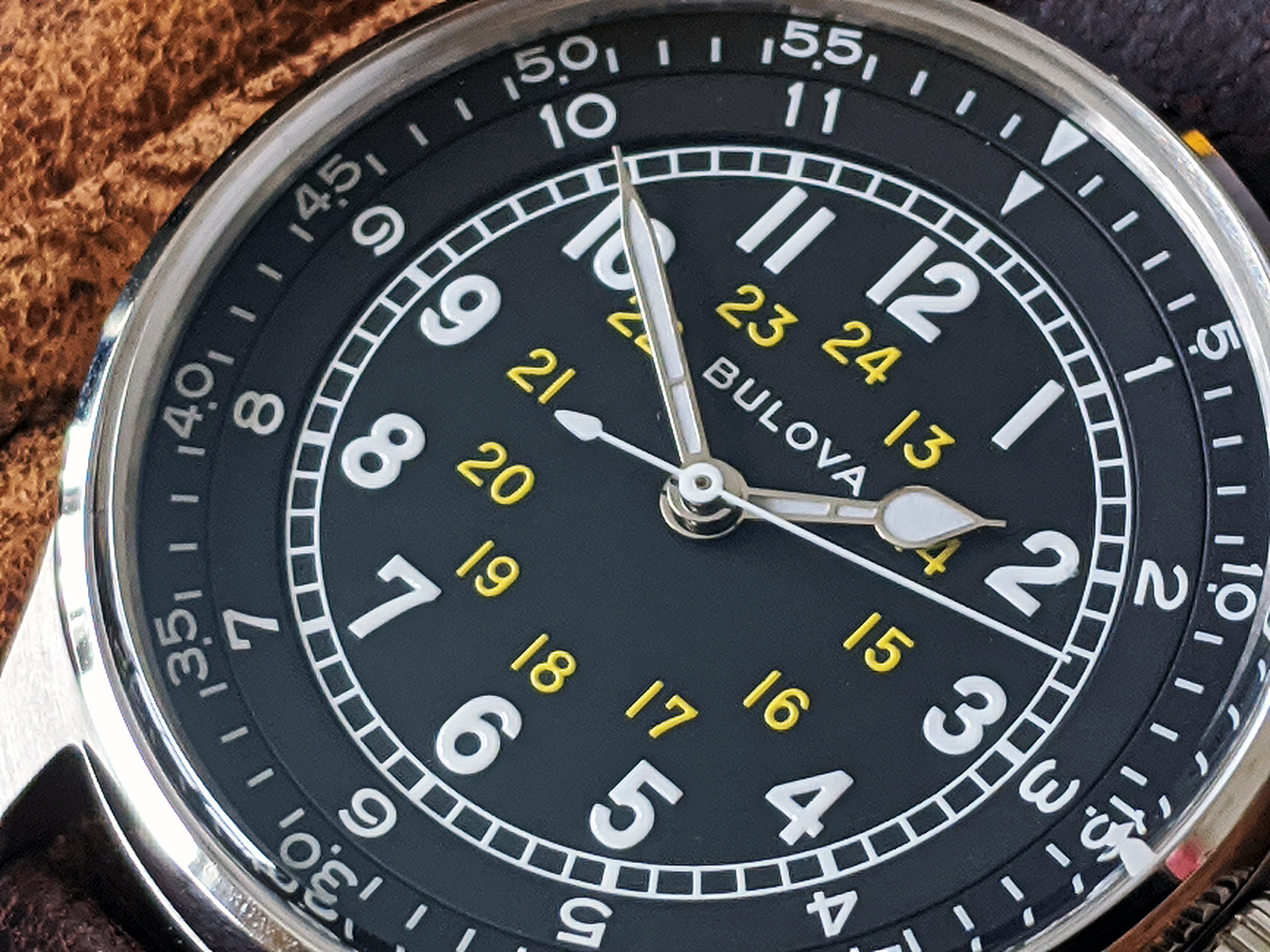 The dial of the Bulova A-15 Pilot, while definitely recognizable as a pilot’s watch, takes a different tack from its German contemporaries in terms of design. Whereas the classic A-Uhr flieger design was ultra-modern, minimal, and legibility-forward for the time, the American equivalent of the A-15 Pilot trends toward packing as much functionality into one dial as possible and preserving a few more ornate elements. Looking at the bare basics of the design, the large lumed Arabic numerals and railroad seconds track root the design in the early 20th century, especially once the surprisingly delicate spade and sword handset is added to the mix. Just inboard of the large hour numerals is a second 24-hour scale in high-visibility yellow, useful for keeping track of military time at a glance. The period correct Bulova print logo is here, as well, showing the dedication for authenticity that really sets this watch apart from lesser reissues. The A-15’s party piece, however, is its pair of rotating inner bezels. While the outer ring features a full minutes scale, the inner ring features a 12-hour track. These two in conjunction offer a wide variety of potential functions, from using the inner ring as an impromptu GMT bezel for cross-continental flights to using both bezels in conjunction to create a 12-hour elapsed timer. It’s visually unorthodox, to be sure, but after a day or so of use, the two bezels become second nature and this humble three-hander can stand in acceptably for a GMT or even a 12-hour chronograph in a pinch. That said, the hands are just a touch on the small side for the scale of the dial and lume application is weak. 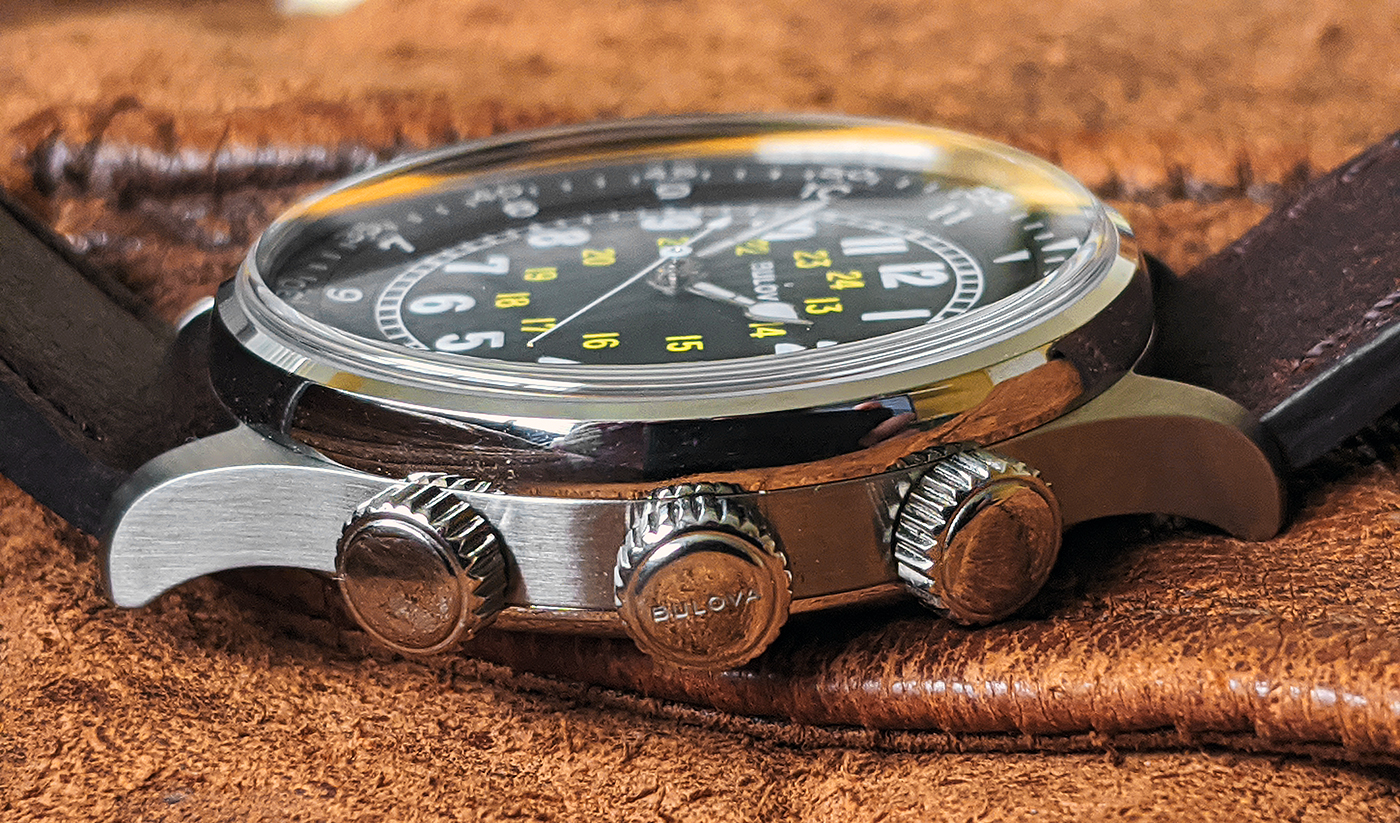 The Bulova A-15 Pilot is powered by the Miyota 8S26 automatic movement, one of the lesser used movements in the Citizen Group’s grand catalog. While general specifications for this movement are tough to come by, our test example ran steady at +15 seconds per day throughout the review period. 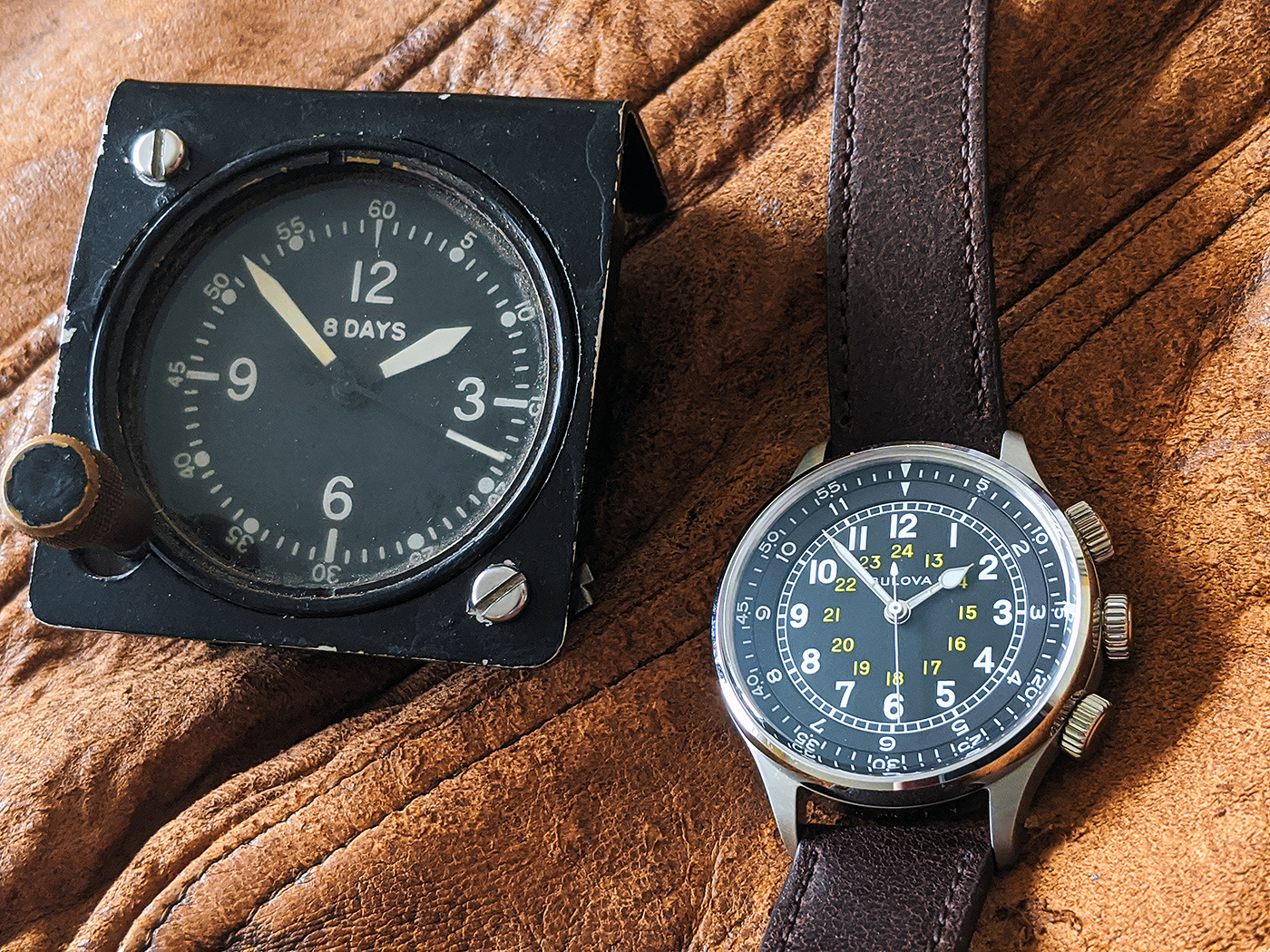 In keeping with the old-school military feel of the A-15 Pilot, Bulova pairs the watch with a distressed leather strap in medium brown. It’s a truly handsome strap, especially for the price, with a supple and thick feel on the wrist. The distressed texture is excellently done, too, not overwhelming but with enough surface variation to elevate it far above the standard brown leather strap. 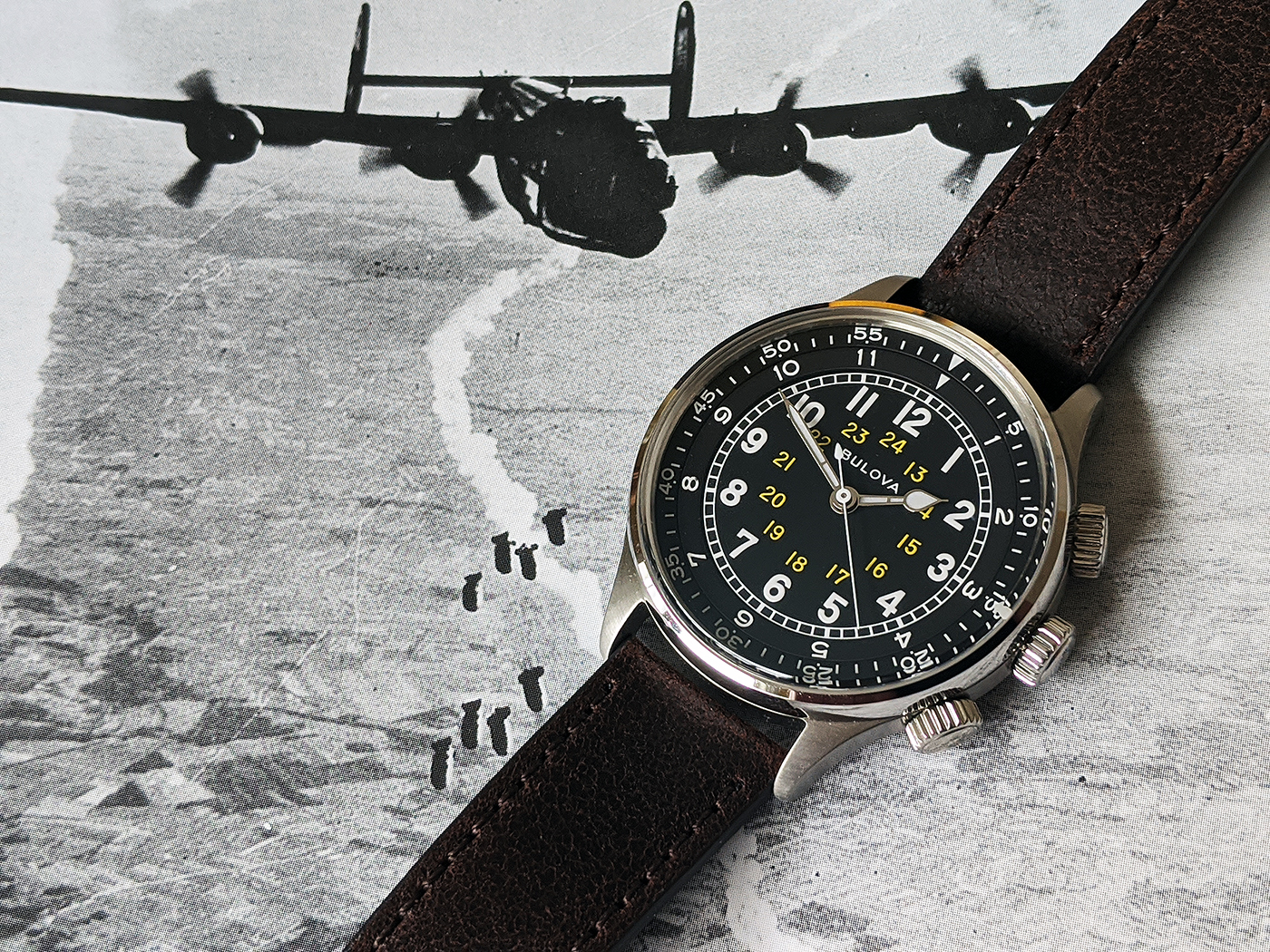 It’s difficult not to be swept away in the historical connections of any old piece of militaria, and the A-15 Pilot is certainly no exception. My grandfather, USAAF Lieutenant David L. Bowman (Ret.), was a navigator and bombardier for a B-24 Liberator heavy bomber crew in the 15th Air Force during World War II, flying missions over Italy, Germany, Austria, and Romania. I have no record of the watch my grandfather was issued, and most of his effects from the war were stolen from his home sometime during the mid-‘50s. Even so, it’s easy to imagine one of the original A-15s on his wrist as he mapped flight paths, stared through Norden bombsights, braved waves of Focke-Wulfs, and eventually bailed out of the plane’s front wheel well as it succumbed to enemy flak over Romania. If for no other reason than that, it’s hard not to take a liking to the Bulova A-15 Pilot. 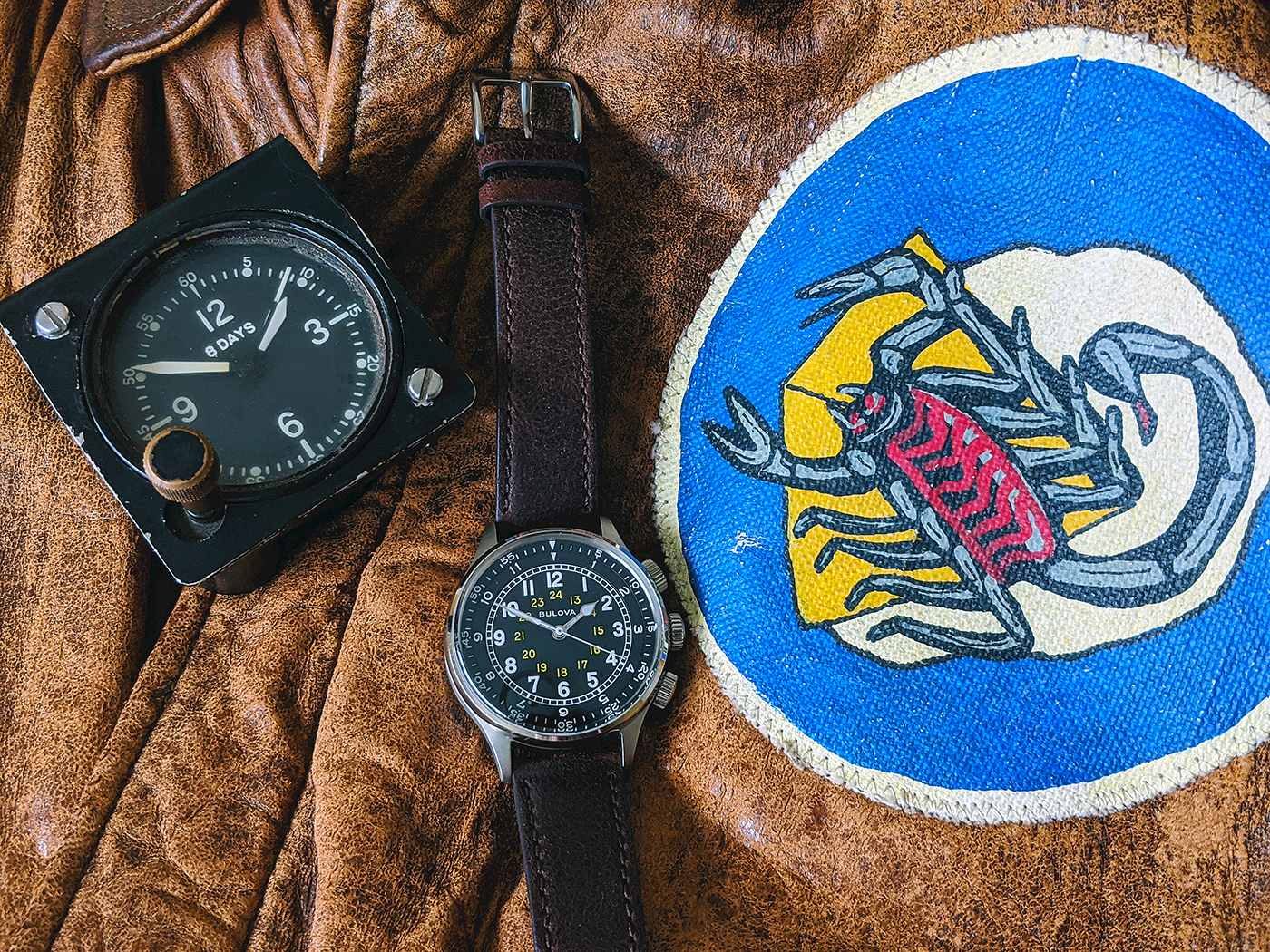 Even beyond my own personal affection, it’s a safe bet to say that Bulova has a real winner on its hands here. This combination of build quality, usability, function, and all-American war-era charm is tough to beat, and the pricing is also impressive. The Bulova A-15 Pilot is available now from authorized retailers and online for an MSRP of $695. For more information, visit Bulova’s website.

Necessary Data
>Brand: Bulova
>Model: A-15 Pilot
>Price: $695 USD
>Size: 42mm-wide, 14mm-thick
>When reviewer would personally wear it: As a daily-wear casual sports watch or as a daily reminder of history.
>Friend we’d recommend it to first: A WWII or aviation buff, someone who loves military aviation but isn’t moved by traditional pilot watch offerings.
>Best characteristic of watch: Twin rotating bezels give this design equal doses of practical functionality and unique character. Solid production value for the price.
>Worst characteristic of watch: Wide stance on the wrist and weak lume.