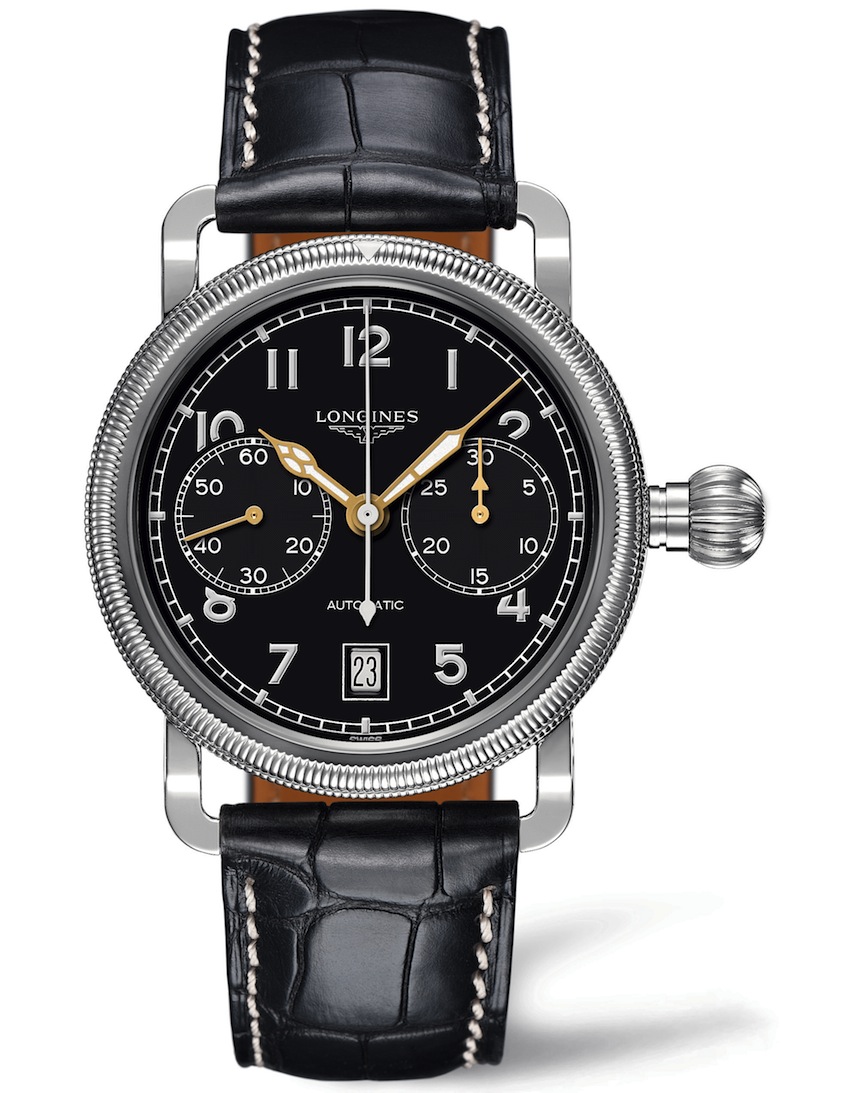 Longines has just announced a new (old looking) collection with the new Avigation Oversize Crown pieces. As a mid-year release, these are in line with the many classical sport watch pieces that Longines enjoys producing. Retro looking pilot watches are unquestionably in their renaissance as they not only manage to fit perfectly into the popular trend of larger watches, but also serve as a refreshing alternative to retro-inspired dive watches (come on folks, leave a few historic designs to revisit next year). At launch, the collection will contain a three-hander, GMT, and chronograph.

What is much more interesting for those of us who enjoy retro-style watches such as this, is that models from Longines tend to be rather fairly priced. Longines is paying tribute to the older era of flight with these three new models in the Avigation Oversize Crown collection. [Ed. note: “Avigation” is clearly a contraction of “aviation” and “navigation.” Though the 15 year old boy that still lives inside of me chuckles each time he says the name out loud.] The Avigation Oversize Crown, as Longines tells us, is based on a model they produced in the 1920s. The most eminent feature of all three models has to be the “generously-sized” onion crown – and while the crown in itself isn’t necessarily ‘oversized’, its unusually long stem and thus its distance from the case side, definitely makes it an eye-catcher (is that a large crown on your wrist or are you happy to see me?). The reasoning behind extending the crown is to make sure it is not in the way when adjusting the bezel or winding the crown while wearing thick gloves.

I’m sure it made sense when men and women were flying their biplanes with open cockpits – while wearing several layers of clothes to keep themselves relatively warm from the wind, with a timepiece strapped to their arms to time the intervals between important reference points. Although the fluted, bi-directionally rotating bezel does have a triangular index to enable the 21st century wearer to use these watches for timing, I think it is safe to say that the crown’s special design will remain more of a conversation starter than a useful design feature. It is entirely possible that the elongated crown design will cause it to dig into some people’s wrists (though we haven’t tried one on for ourselves). Nevertheless, the collection is quite striking in appearance. Legibility is a key factor for of all pilots watches and that necessitates the use of large and effortlessly distinguishable hands, easy-to-read numerals and proper contrast between all of these elements on the dial. Consequently, all three watches have gold-plated luminous hands as well as luminous numerals that contrast nicely against the black dial to provide strong legibility, even in low-light conditions. The cases are stainless steel and measure 41 millimeters in diameter – but don’t forget that excludes the added width of the long winding stem and the rather large crown!

The basic model of the lot is the reference L2.777.4.53 three-hand model. Its L615 self-winding mechanical movement (which basically is an ETA 2895/2 which in turn is a modified 2892) shows the hours and minutes, while the seconds and the date are displayed at 6 o’clock. A GMT complication is featured in the second Avigation Oversize Crown, called the ref. L2.778.4.53, which displays the time in a second zone with a centrally mounted hand pointing to its own scale of 0-24 hours. This watch is fitted with an L704 self-winding mechanical movement (ETA A07 171).

Finally, the Avigation L2.783.4.53.2 chronograph completes the list. It is equipped with an exclusive-to-Longines automatic mono-pusher chronograph movement called the L788 – developed by ETA as A08.L11. The subdial at 9 will display the running seconds while the one at 3 is for the 30-minute counter of the chronograph. It also has a date display at 6 o’clock, though this time – fortunately – the “6” is not cut in half by the aperture. Single pusher chronograph lovers are going to enjoy this one for sure. The deal maker (or breaker) for many people will be the size of the Avigation collection, which  Longines has set at 41mm wide. A lot of this is no doubt due to the fact that the crown is so large. The modest size will be a welcome note to those who feel many of today’s aviator watches are too large for their wrists. Consider IWC’s Big Pilot, which measures from about 46-48mm wide. With a polished steel case, rotating coined bezel, and loop style lugs, Longines has perhaps hit a very sweet spot with a good looking retro pilot watch that offers a lot for many buyers. No doubt these aren’t the first (or last) retro-inspired aviation watches from the brand, but the Avigation Oversize Crown collection is a nice addition, so long as you don’t think of the name too often.

Prices for the US market will be $2,400 for the most basic version (L2.777.4.53.2), $3,100 for the GMT L2.778.4.53.2 and $3,500 for the chronograph model (L2.783.4.53.2). We will have to see one of these in the metal to judge how well they wear – especially with the extended crown. Considering the prices, I feel that any of these three new models could be a viable alternative for those in search of a pilots watch with proper vintage flair, a rather relevant and unique design feature and a relatively reasonable price tag. longines.com