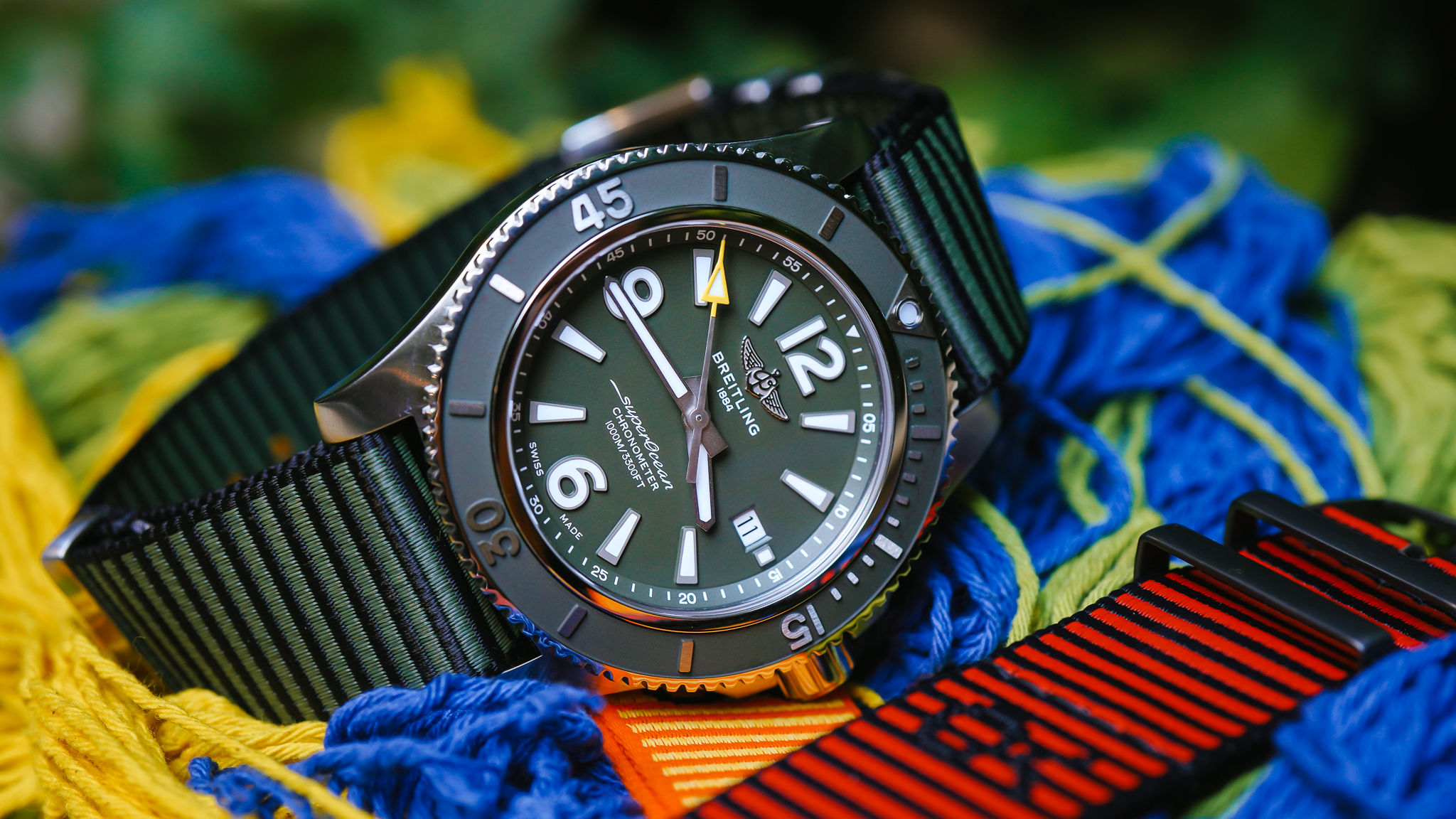 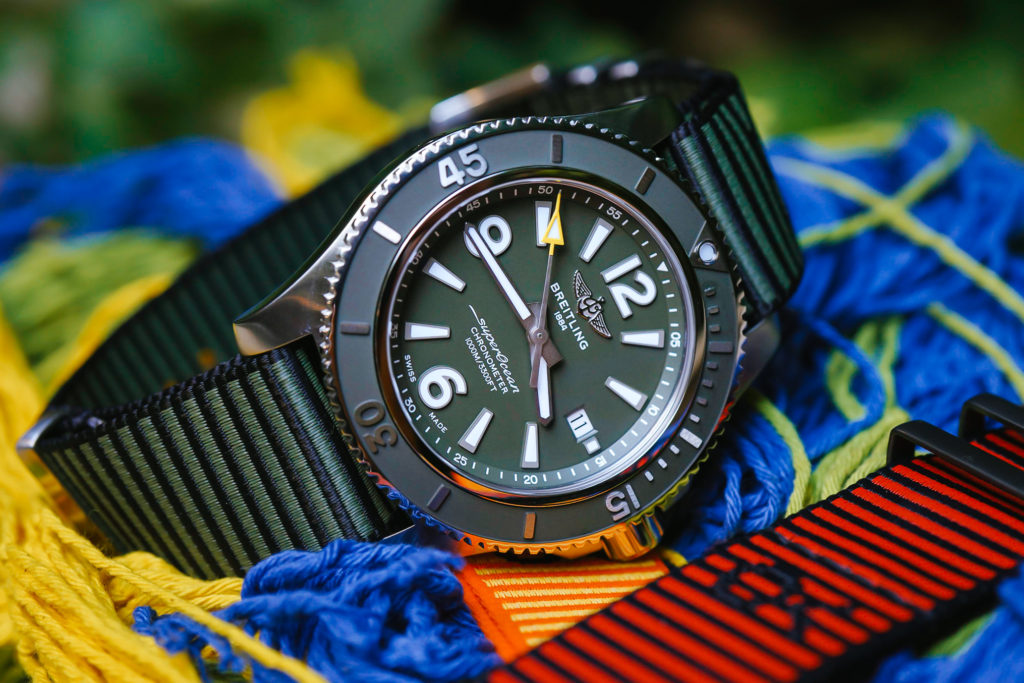 Georges Kern is no longer warming up. The Breitling CEO is running at full speed now, carrying unfettered momentum behind each of his brand’s many personal projects — many of which, like last week’s Summit launch concept, are now proven hits and no longer in their infancy. One such project has been the cultivation of a friendship and brand collaboration with prolific surf star Kelly Slater that has now yielded the second in a series of Breitling x Outerknown Superocean watches, designed with input from Slater. For those keeping score at home, Slater has won the world surf title an unprecedented 11 times, started an apparel company called Outerknown that seeks to disrupt the sustainable fashion industry as we know it, and built a wave pool with a USC scientist specializing in geophysical fluid dynamics. 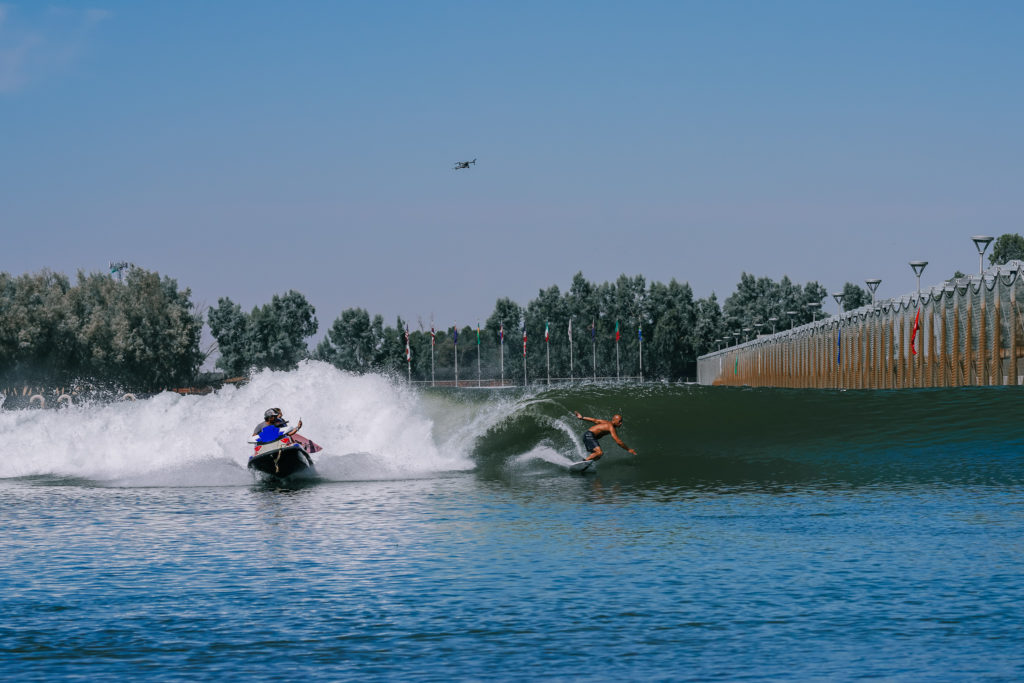 And it’s here, at the edge of this pool where I now stand, slack-jawed as Slater is towed out to its north end. There is a distant rumble from its far edge as a perfectly formed six-footer rises from the water’s glassy surface, conjured from the dusty earth using magic that Tolkien himself might struggle to articulate. The speed and smoothness at which it appears are startling, like special effects crossing the uncanny valley, leaving the viewer unable to discern fiction from reality. And just like that, Slater is already upright — he blasts onto the curled lip and snaps back, shooting an arc of spray into the sky. He does it again. And again. And again, for a full 45 seconds, his ride ending as he explodes from the wave’s immaculately shaped barrel, 20 yards from shore. It is, unquestionably, the singular ride that any surfer might spend a lifetime pursuing. But just as it ends, it repeats, running in the opposite direction of the pool once every few minutes, for the remainder of the day. It’s easy to see why it’s been dubbed “the smile machine” because everyone who emerges from the pool does so with a wide grin. 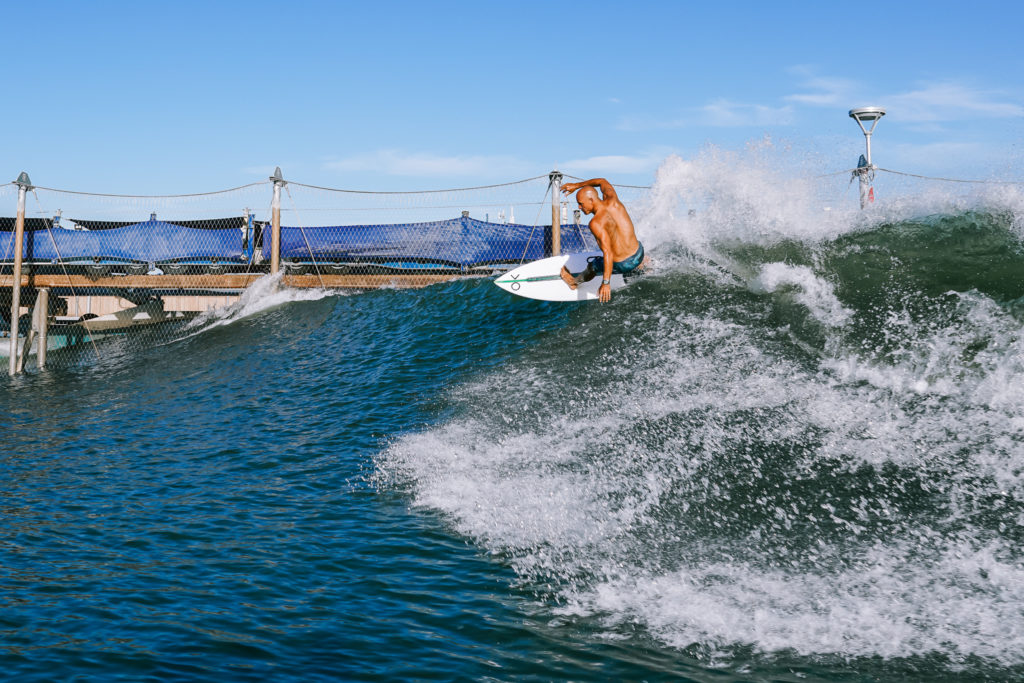 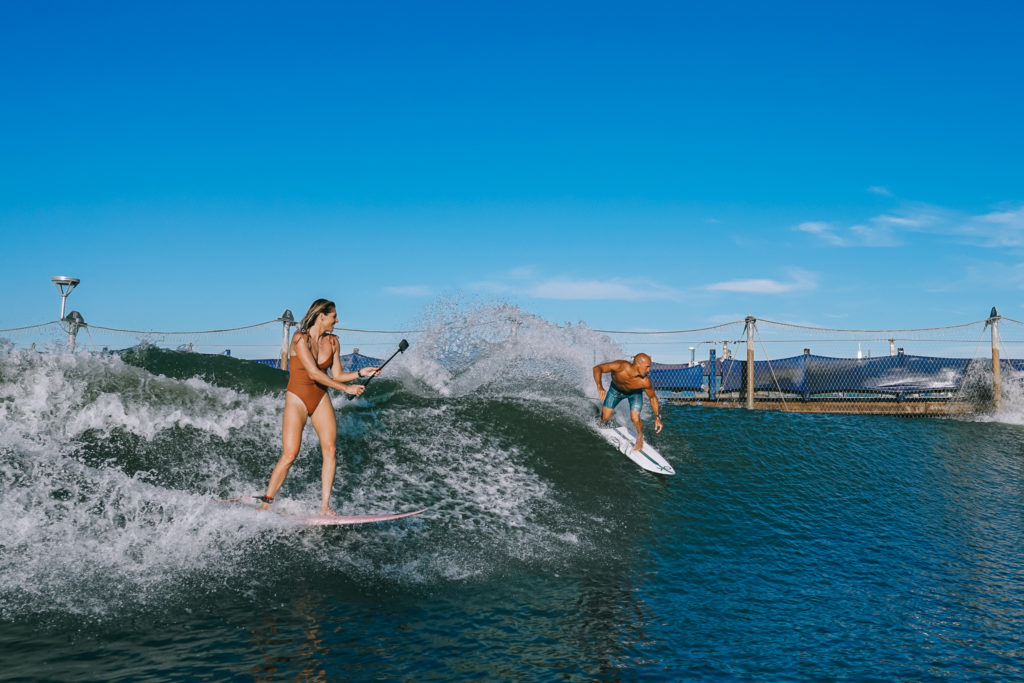 To be clear, this is far from an ordinary wave pool. It began as a top-secret project disguised as a tilapia hatchery in the middle of Central California’s water-starved farm country, with the ultimate aim of producing an objectively perfect barrel that could be ridden over and over again. Prior to December 2015, it was the surf world’s equivalent of the moon landing, and the sport’s last real undiscovered realm, where remote breaks in every corner of the globe have more or less been explored, tamed, and documented on Surfline. But Kelly Slater wasn’t chasing another world title. He wanted a moonshot. So he and his friends built it over the course of a decade with cutting-edge science and engineering, yielding the longest, rideable open-barrel human-made wave on the planet. And the first time a video of him gleefully riding it appeared four years ago, surfers the world over collectively lost their minds. 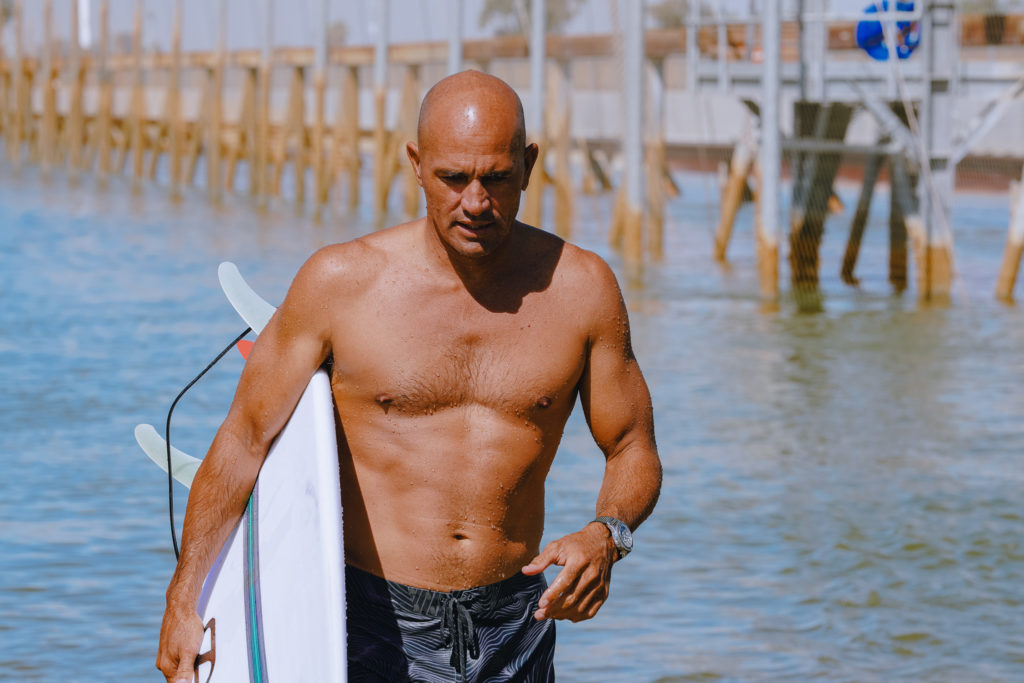 For what it’s worth, I’m not really a surfer, but one needn’t be a professional waterman to watch Slater’s wave and be mesmerized by its shape, speed, and stunning consistency — elements that fly in the face of the universally accepted reality that the ocean is anything but consistent. In fact, unpredictability is what makes surfing such a uniquely challenging (and equally fulfilling) sport in which every ride is different because every wave is different. Every wave but this one. Driven by “the Vehicle,” a submerged plow-shaped wedge that runs along a track at the side of the pool, the wave is as powerful as its barrel is perfectly shaped and seemingly unending. But it is also predictable — and this is what makes it eerily disparate from the chaos of a real-world break, and the dream-haunting endgame for many a surfer the world over. 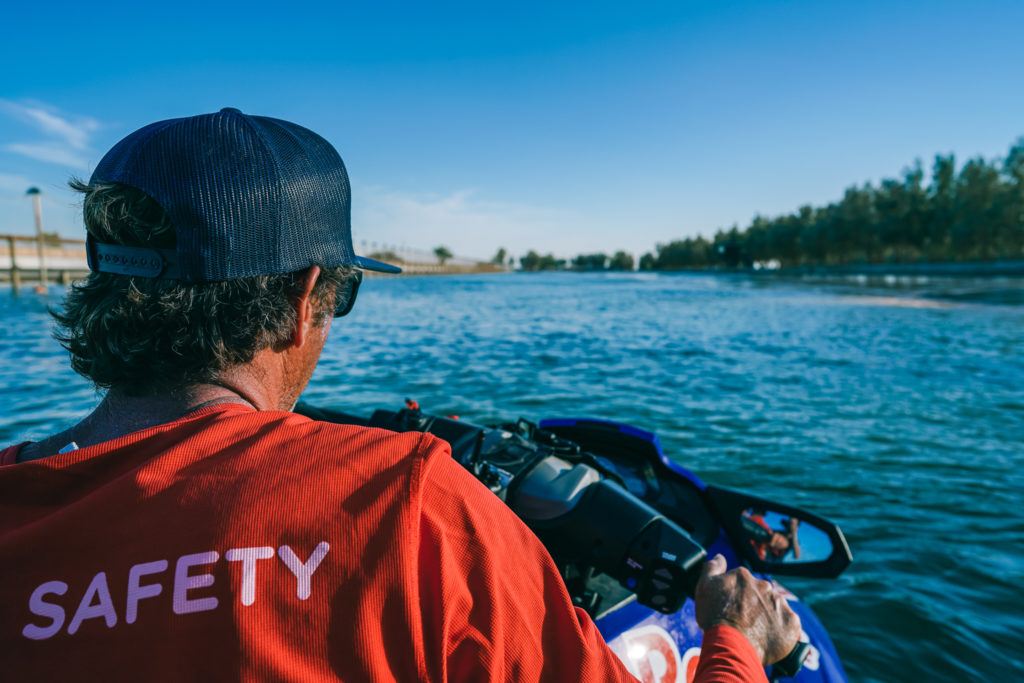 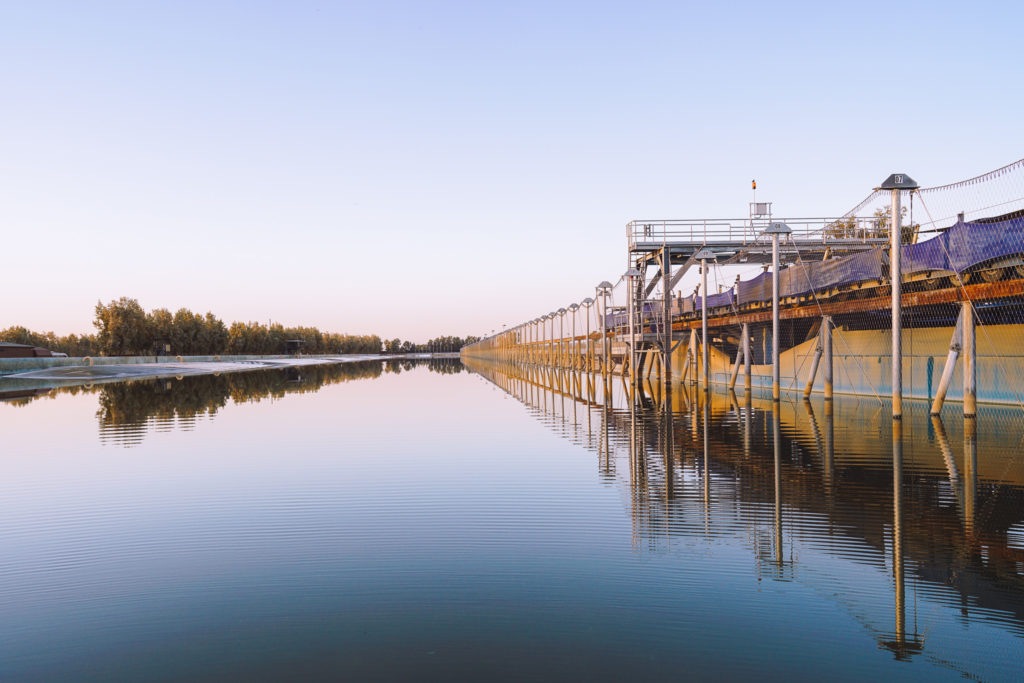 The wave also represents the scope of Slater’s ambition, which seems to know few bounds. His founding of easygoing apparel label Outerknown represents a similar degree of ambition, with the ultimate goal of creating a clothing line that celebrates surf culture while disrupting the world of disposable “fast fashion” by proving that sustainability can be both premium and profitable. These are all tenets shared by Georges Kern for the future of Breitling, which he aims to make carbon-neutral in the next three years through measures already in place, like the reduction of superfluous watch packaging (which he openly admits to hating) and the incorporation of more sustainable elements like the recycled nylon straps fitted to the Outerknown watches. This action would join a movement of “sustainable luxury” in the watch industry that seems to be gathering momentum, with Outerknown investor Kering Group (a French Luxury brand group that houses Gucci, Saint Laurent, Ulysse Nardin, Girard Perregaux, and others) having already publicly pledged its commitment. 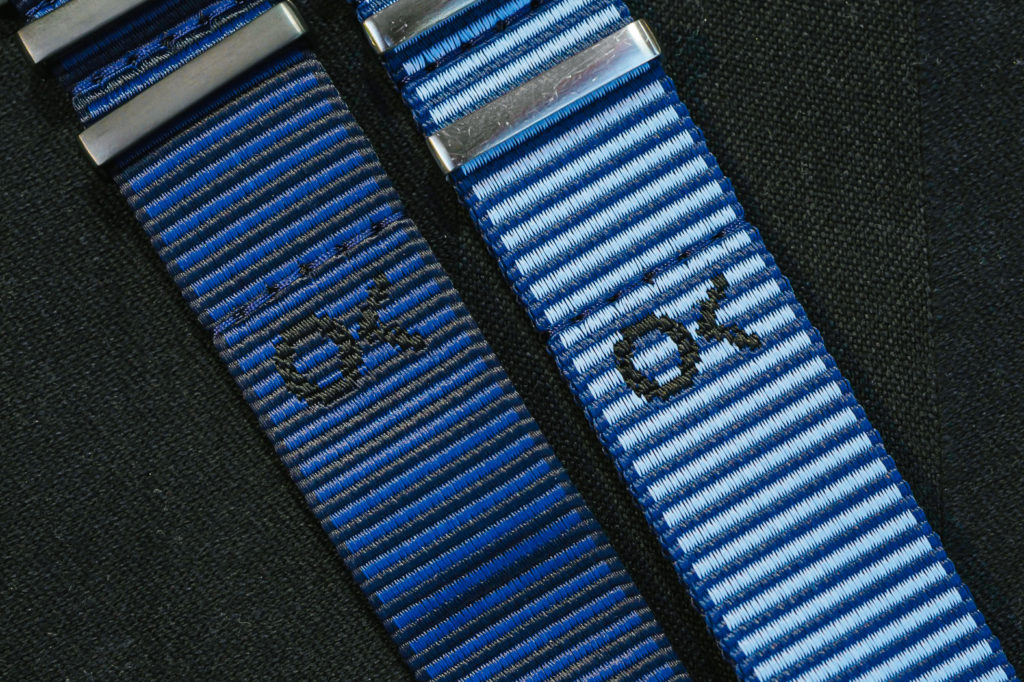 Georges Kern understands that Breitling cannot singlehandedly change the world. But he knows that Breitling, like Outerknown, represents a powerful platform that, with combined efforts, can reach and educate entirely new audiences on pressing matters, such as the current plight of our oceans. It’s here that Kern and Slater’s ambitions intersect, bringing us to the second watch in the Breitling x Outerknown collaboration, which doubles down on the message established by the first Superocean Heritage Chronograph released last year, shortly after Kern’s tenure began. At the heart of each Outerknown watch is a strap woven by Breitling from Econyl – recycled nylon threads spun from salvaged ghost nets, of which it is estimated that well over a half a million tons lie discarded at the bottom of the ocean. 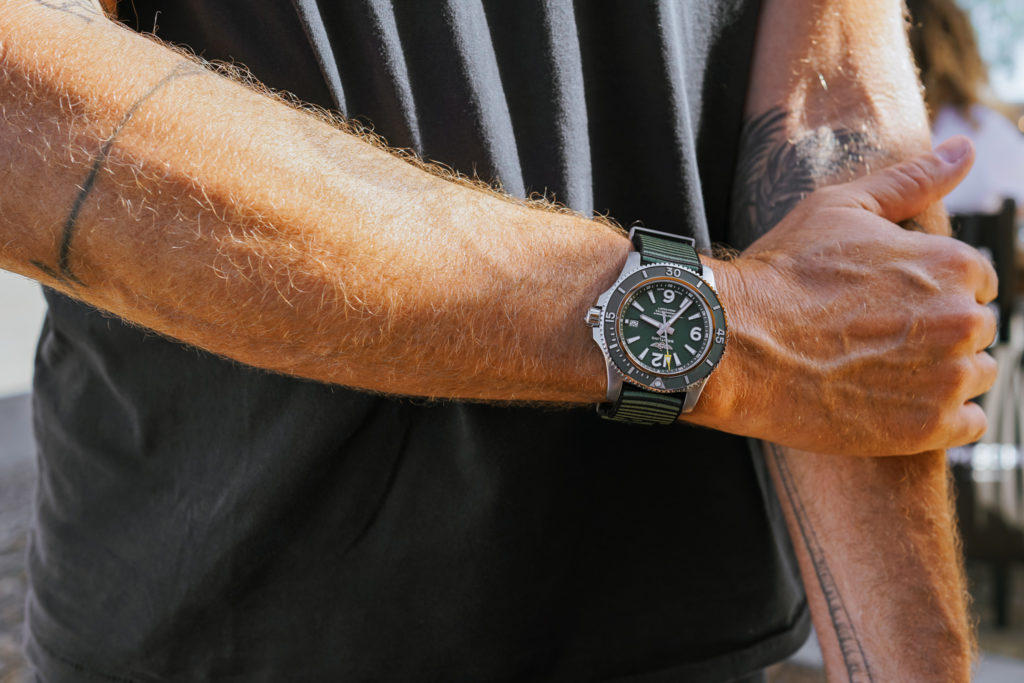 The straps are colorful, supple and, most importantly, as comfortable as any NATO I’ve tried from third-party and OEM manufacturers, alike. And at this year’s Summit, Breitling confirmed it is looking beyond the Outerknown watch and getting into the strap game in a big way, with a raft of new colors and styles, each color-matched to existing dials in the Superocean and new Avenger collections. Straps are just the beginning, though, and Kern considers each of these watch releases as stepping stones that push the brand and its suppliers toward a greater level of sustainability on a global scale. 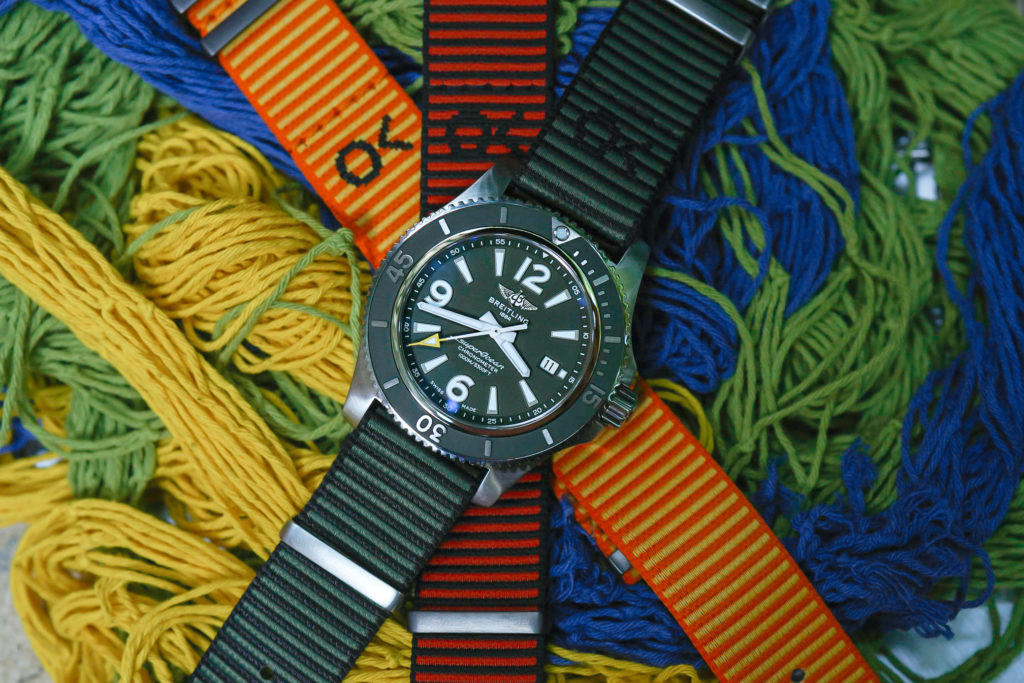 Kelly Slater is only the world’s greatest surfer, but he’s a simple man. He describes the birth of Outerknown as waking up one day suddenly obsessing about what he put on his body, after spending years obsessing about what he was putting in his body. Fast-forward to four years later with CEO Mark Walker at the helm, where his young brand is already a leader in sustainable manufacturing, having created successful collaborations with major global brands like Levi’s and Vejas while helping consult and shepherd others in the Kering group toward achieving similar goals in sustainability. In addition to the recycled nylon straps, Slater’s design directive for this particular Superocean was unsurprisingly brief: Simply make it smaller, lighter, and greener (“kelly green,” his favorite color known by those in his circle) to yield a watch that would be less obtrusive while paddling out and a nylon strap for added in-water security.

Breitling executed this directive with a three-hand Superocean rendered in “Kelly’s Green,” but contrary to the hue usually reserved for the likes of the Boston Celtics or St. Patrick’s Day, Slater’s green is a matte, olive drab with a matching ceramic bezel. Earthy and uncomplicated, it still maintains the high degree of refinement we’ve come to expect from Breitling cases and dials, while achieving a look that should feel at home on the wrists of style or eco-conscious watch fans, alike. Aligning with the other Arabic-dialed Superocean watches that were refreshed around this time last year, the new Outerknown x Breitling edition is a fully modern 44mm stainless steel case that’s water resistant to 1000 meters and bears an automatic helium-release valve at 9 o’clock. Contrary to the Breitling divers of the former Schneider era, this one wears with relative compactness, with a modest lug-to-lug length and a relative minimal thickness (though the nominal added thickness of the NATO strap should certainly be considered).

My favorite thing about the Breitling x Outerknown watches isn’t the fact that they were built to spec by the greatest surfer of this, or any other, generation, or that the watches include straps with an eco-minded focus, but for the vision they represent: a small part of a much bigger recalibration on what it means to respect the planet while being a for-profit luxury brand in the 21st century. Sustainability used to be a trend, but no more — it should be mandatory regardless of the segment, and brands without an openly shared plan should be considered part of the problem, not the solution. 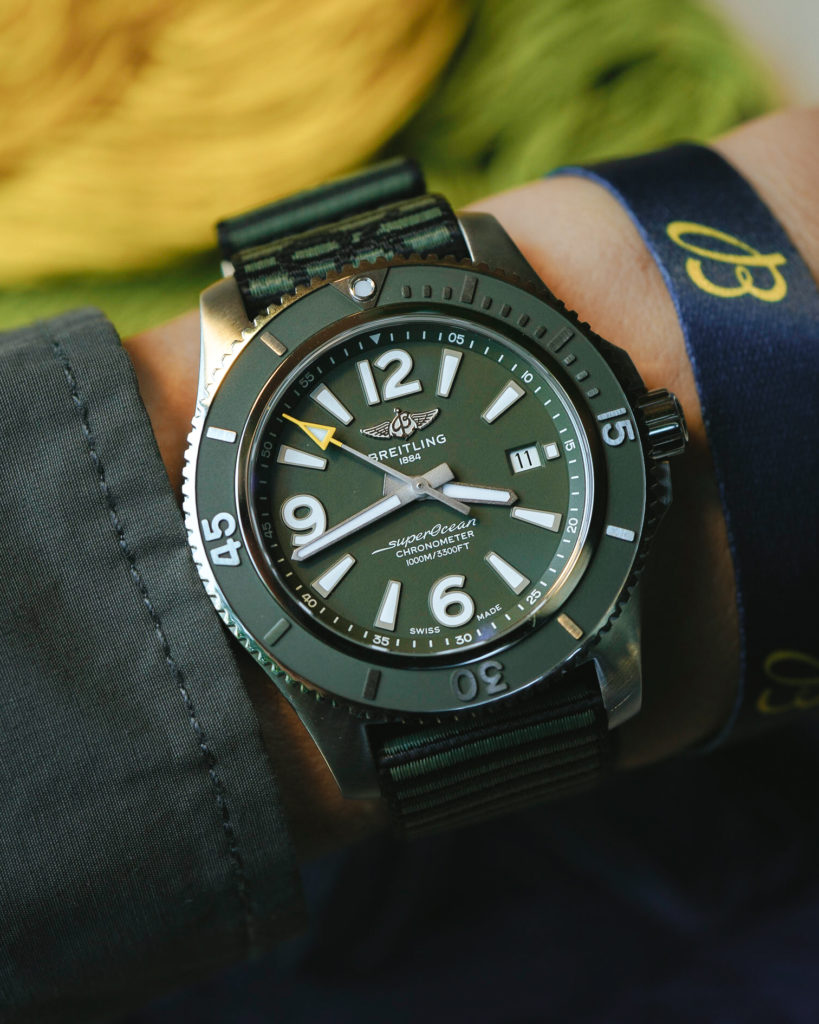 Last year’s Outerknown watch was limited in production to around 1500 pieces, and though unconfirmed, one should assume a similar output for this year’s version, which carries a price of $4,200. Learn more about the Breitling x Outerknown collaboration at breitling.com. 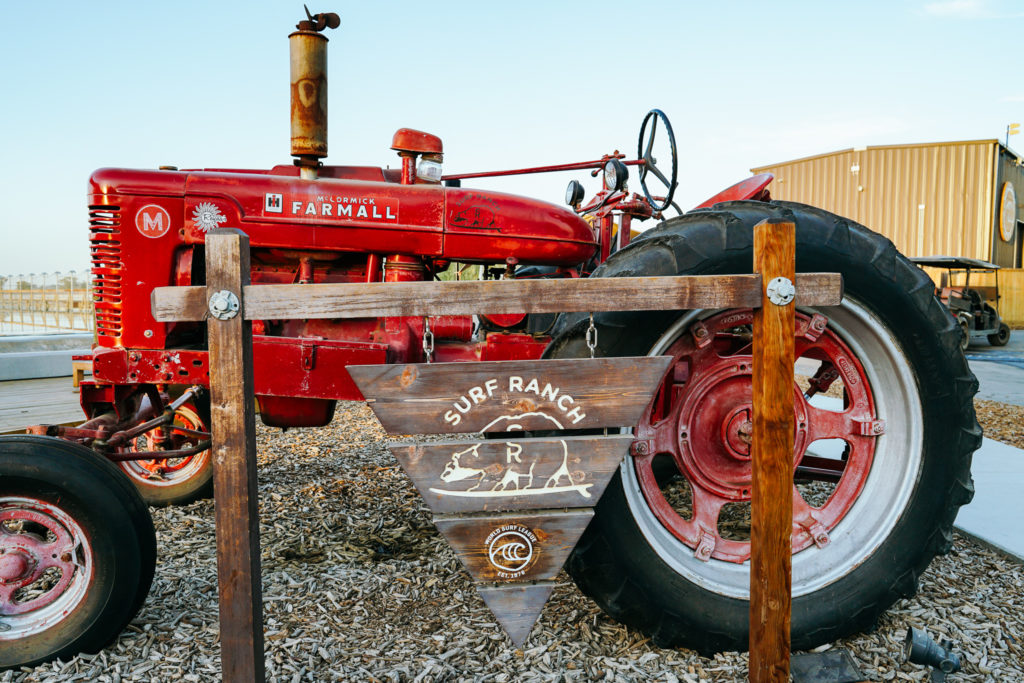