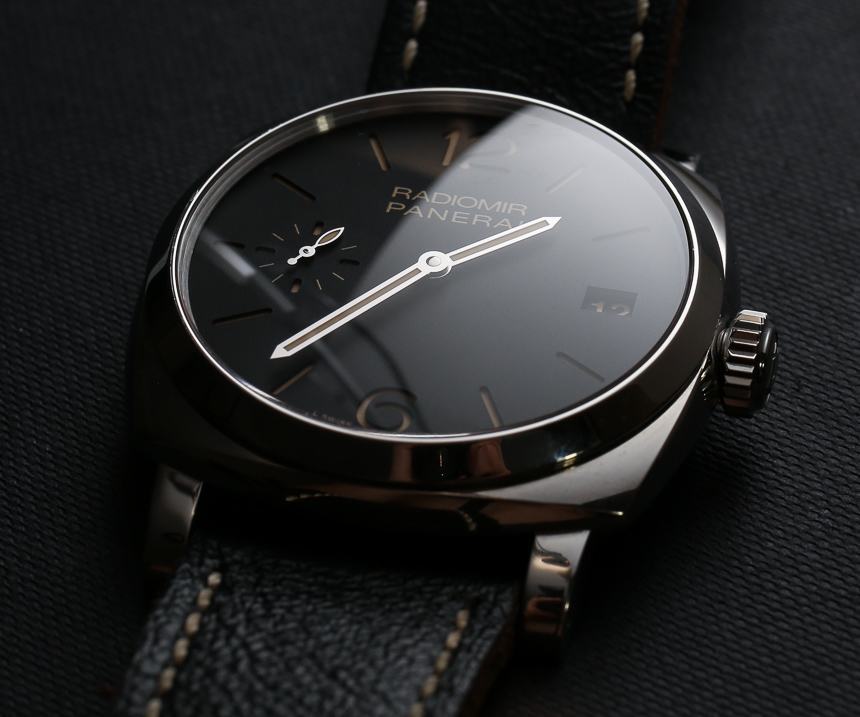 47mm wide and pretty? This must be a Panerai. Today I review the Panerai Radiomir 1940 3 Days, aka PAM514 (PAM00514). I’ve been spending a lot more time with Panerai over the last few months. It is a brand that hasn’t gotten a lot of my attention in a few years. Why? Well let’s face it, even Panerai lovers will agree that in many instances, if you are familiar with a few Panerai watches, you are familiar with most of them. Panerai has a few set case styles and a few set dial styles with a lot of mixing and matching and slight tweaks. To the “un-initiated” those tweaks are just that, to the initiated, however, those tweaks can be game changers.

A good example is the case used by Panerai for the PAM514. Known as the Radiomir 1940, the case is really a combination of design elements from the Radiomir and the Luminor. Some might call it a historically-influenced transitional case from Panerai’s history – and that would be true, but in many ways it is a good way to combine a bit of love for the Radiomir and Luminor cases in a distinct design. So yes, these are design tweaks, but in many instances I like to think that Panerai is working hard to design the perfect Panerai for each distinct flavor of consumer taste out there. When Panerai released the PAM514 in 2013, they also released a sister model, known as the PAM512. What is the difference between the two? Both are Radiomir 1940 watches but the PAM512 comes in a 42mm wide case with a different movement (and no date). The PAM514 is 47mm wide with Panerai’s in-house made P.3000 manually wound movement – a mechanism that is quite attractive visually through the expansive sapphire crystal caseback window.

The P.3000 is a simple yet elegant movement. The bridge design is attractive and the mixture of industrial design and grace is apparent when you look at it and difficult to master in the way Panerai was able to achieve. Operating at a frequency of 21,600 bph (3Hz), the P.3000 has a power reserve of 72 hours. Functionally, the movement offers the time with subsidiary seconds dial and the date. When you pull the crown out one spot it moves the hour hand around in one hour stops which is useful for traveling, and also how you set the date. Though it does make adjusting the date a bit of a nuisance compared to a traditional quick-set date. Oh yes, the date. What an odd item to be the source of controversy. Panerai integrates a date disc that matches the tones of the rest of the dial and I think overall makes the dial feel more useful. Though people do argue that the addition of the date window takes away from the overall elegance of the dial. I suppose everyone is right. The PAM512 doesn’t have the date, as well as many other Panerai models. Like I said, each of these is a slight tweak meant to satisfy at least one super picky Panerai fan.

While there is nothing new about the dial design of this Radiomir 1940 3 Days watch, it is very attractive and legible. You have the typical Panerai “sandwich dial,” as well as lume with a slightly aged-style color. Unlike the Panerai Luminor, only the top part of the dial has text – which I happen to enjoy. Overall, Radiomir dials are probably my favorite of what Panerai has to offer… across a range of what are admittedly a lot of nice dials. It is a Panerai, so the lume is pretty great – no complaints there. The funny thing about many of the different Panerai case styles is that they wear differently and cannot be judged by the size alone. For instance, a 44mm wide Luminor 1950 case will wear larger than this 47mm wide Radiomir 1940 case. Why? Well a major reason has to do with the relatively flat caseback. The exhibition caseback window on the PAM514 is thin and allows for the watch to sit with a much lower profile than some of Panerai’s taller fare.

So while this Panerai watch is wide, it is also thinner than you might expect, making for a very comfortable fit. I think that this style case in a 44mm size would be perfect for my wrist, and Panerai is probably planning one or has probably already produced something very similar. I also like the very well-polished steel case which goes with the look well. Panerai also produced an 18k rose gold version of the Radiomir 1940 3 Days, known as the PAM515. I usually don’t discuss watch crowns, but in this case I am going to mention it because Panerai made a particularly nice one. Unscrew the crown, and you’ll see that the stem is very thick and feels very secure. It is difficult to explain it in words, but I just wanted to mention that I was pleasantly surprised by the crown. The case is water resistant to 100 meters and over the dial is a sapphire crystal.

Note that photographing most Panerai watches is exceedingly difficult given the large domed sapphire crystal. Even though Panerai applies an anti-reflective coating, there is going to be a lot of glare. Given the simple dial and prominent hands and hour markers it doesn’t seriously effect legibility, but it is a part of the Panerai ownership experience.