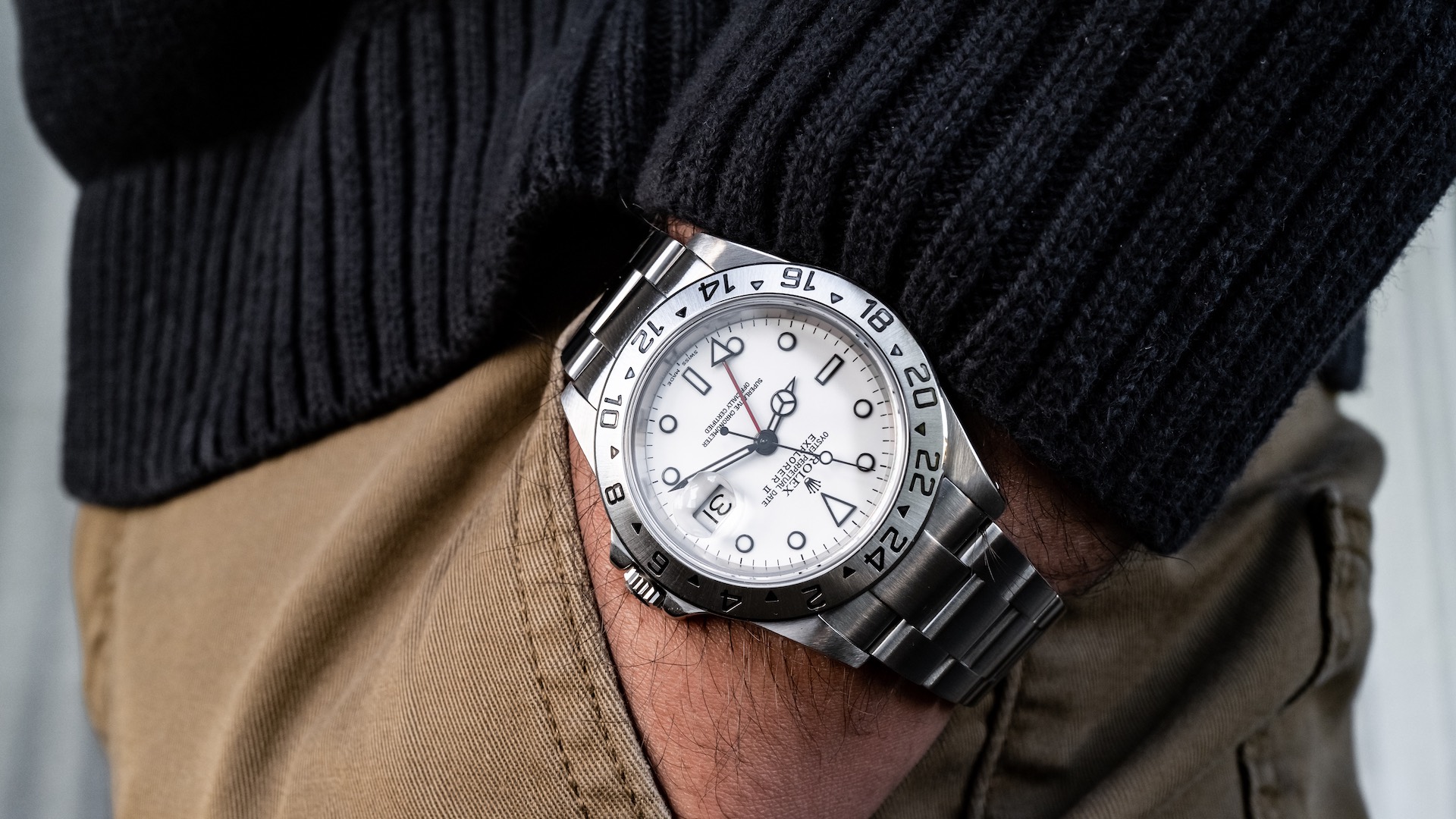 There are a few words that have lost all meaning when it comes to discussing Rolex watches. “Underrated,” “sleeper,” and “undervalued” may not be completely meaningless at this point, but we are getting there at a rapid pace. Social media and, frankly, articles like this one don’t do any favors for the enthusiast hunters out there, but you’d be surprised how many people I’ve met that are pretty clueless about the Explorer II. In this article, I’m going to take a look at the Explorer II Ref. 16570, which was the 40mm version that was produced for 22 years, from 1989 through 2011. Low-key design, dual time zone functionality, near indestructibility, and with a doggedly non-luxurified attitude, the Explorer II 16570 may be the best value modern Rolex sports watch out there.

Sure, I’m a bit biased towards the Explorer II. It has always been my favorite Rolex sports watch, hands down. In fact, the first Rolex I bought was a 216570 black dial (for which I did a head-to-head comparison against the Submariner here). While the Submariner, GMT-Master II, and Daytona get all the spotlight, the Explorer II has been Rolex’s low-key utilitarian tool watch that is also a true travel watch for decades now. A bit of the black sheep of the Rolex sports-watch family, the Explorer II is the Prince Harry to the GMT-Master II’s Prince William (which is funny, because I think Harry wears a polar dial Explorer II).

Introduced as a watch for spelunkers, the Explorer II design is function over form. The darkness in some of these caves makes it impossible to tell whether it is day or night, which is the reason for the 24-hour hand and fixed bezel. While the original Explorer II Ref. 1655 was not at all meant to be a travel watch, the 16570 introduced an independent hour hand that functionally made the watch a dual time zone travel watch.

The totally overhauled Rolex Explorer II Ref. 16550 was produced between 1985 and 1989 and is seen as the “transitional” model between the original 1655 and the 16570 seen in this article. These are much harder to find and are much pricier than the 16570. For better or worse, the 16550 brought the Explorer II more into the fold of the Rolex sports watch family. The sapphire crystal, new Mercedes hands, hour markers, and 24-hour hand were all reminiscent of the GMT Master being produced in those days. It was also outfitted with the Caliber 3085, which added the previously mentioned independent hour hand functionality. 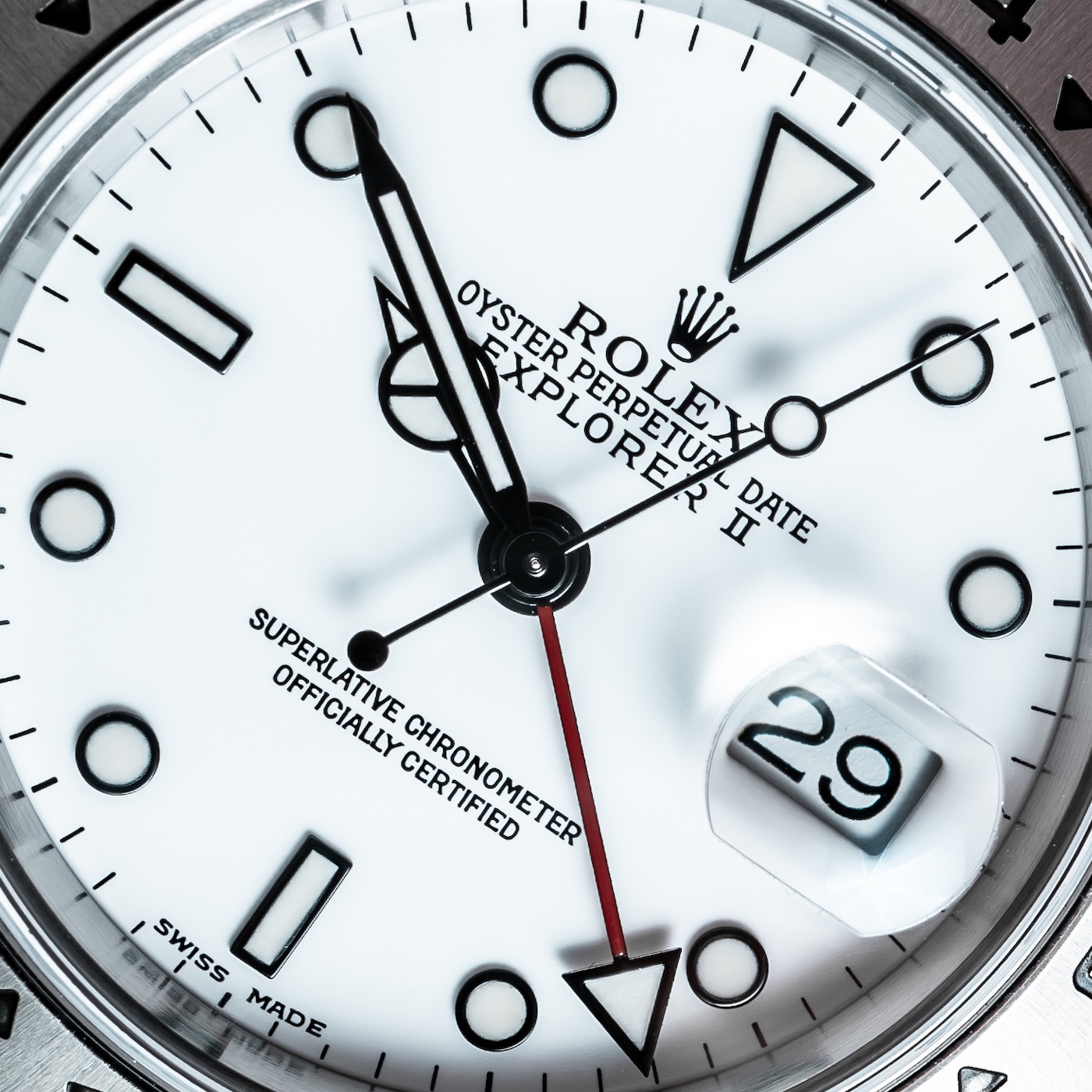 The 16550 also introduced the two dial options that remain to this day, with a black or white (aka Polar) dial. The Polar dial models had a paint defect that caused the dial to slowly turn into a cream color, making them highly coveted by collectors. In fact, these frequently sell for more than the vintage Ref. 1655 aka “Steve McQueen.” It’s shocking to me when I see a cream dial 16550 sell for more than a 1655, but it’s not uncommon.

Fast-forward to 1989 when Rolex releases the Explorer II Ref. 16570, which had an impressive run of nearly 22 years before the 216570 was released in 2011. The 16570 iterated on the 16550 with the new caliber 3185 movement and a small but substantial change to the polar dial model. By replacing the silver outlined hands and indices with black, the legibility greatly improved by really accentuating the white dial. Also, the font used on the bezel numerals changed between the 16550 and 16570, which is just a matter of taste. 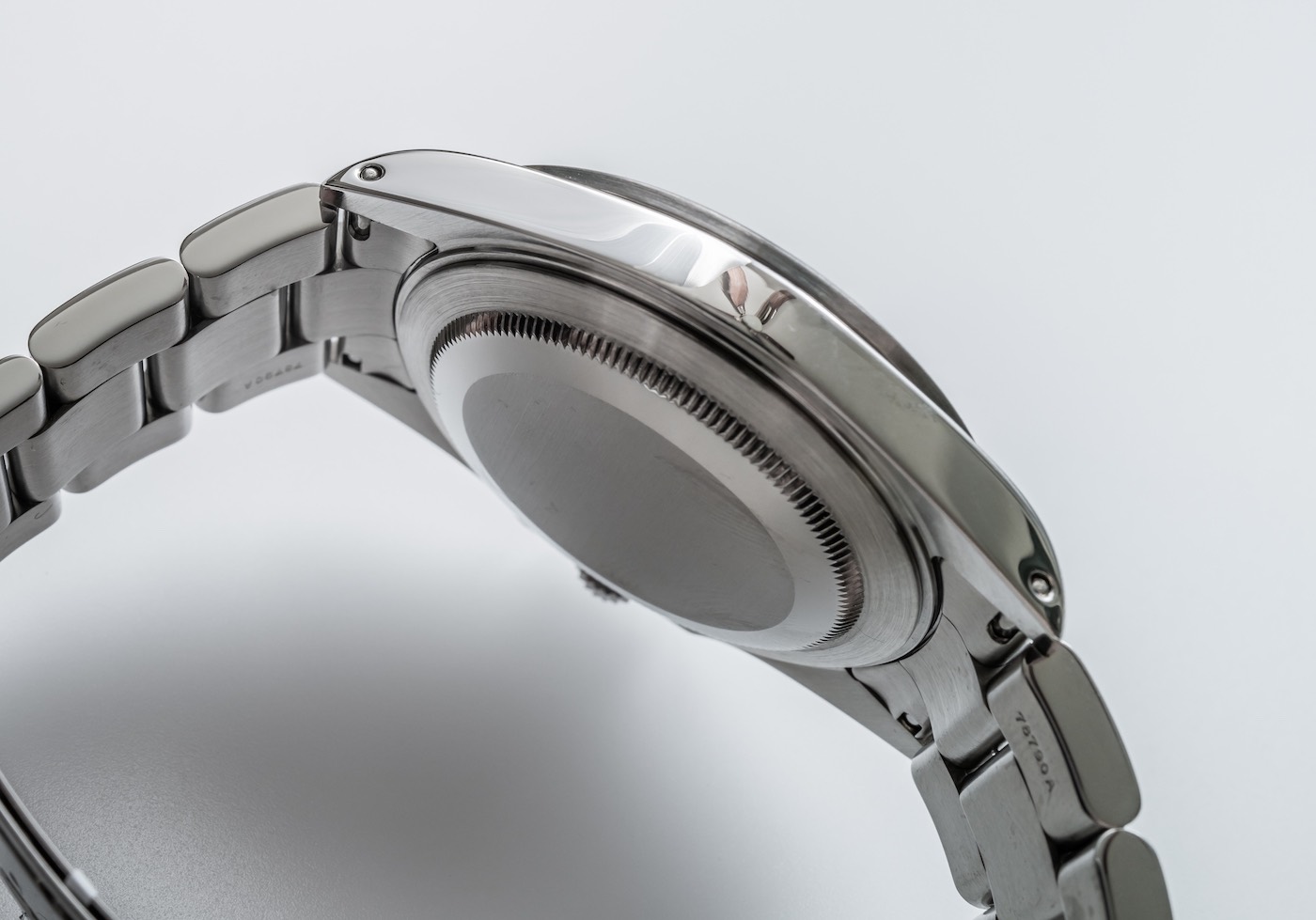 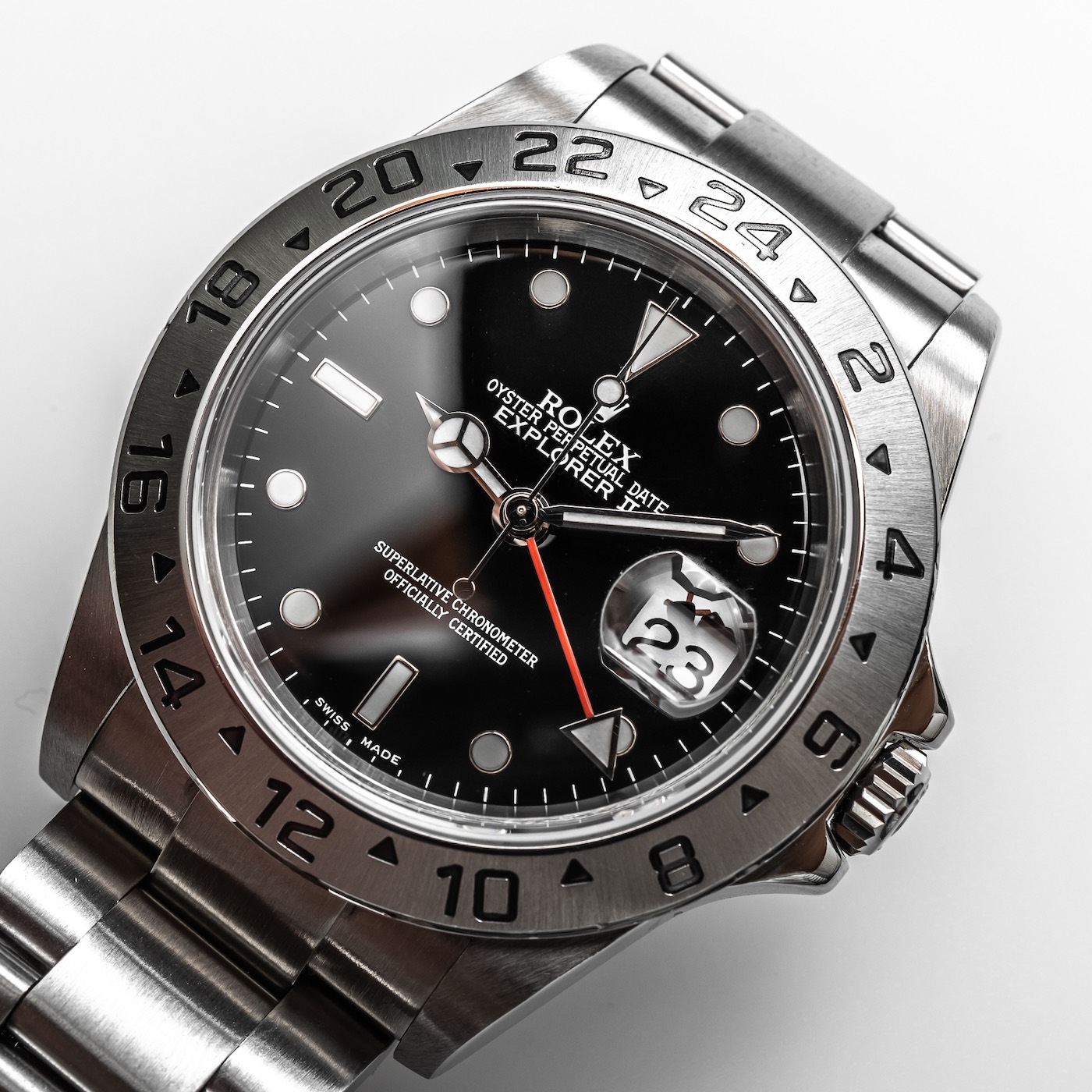 Water resistant to 100M and measuring 40mm-wide, 12.2mm-thick, and 47mm lug-to-lug, the Explorer II 16570 is pretty ideally sized and works for smaller or larger wrists. Worn on my 7.5-inch wrist, I had zero complaints and found the sizing just right. I do personally lean toward a bit bigger, so I prefer my 216570, which is 42mm-wide, 12.5mm-thick, and 50.1mm lug-to-lug. A benefit the Explorer II has over the Submariner or GMT-Master is that the 24-hour bezel slopes downward, giving the case a slimmer look and feel.

Inside the 16570 is the caliber 3185 movement (models post-2006 have the slightly updated 3186), which was introduced in 1988 and was used in the Explorer II and the GMT-Master II. It was Rolex’s first movement with an independent hour hand, and it has hacking seconds as well. Done with 31 jewels, the 3185 operates at 28,800 vph and has a 50-hour power reserve. Of course, considering how many Explorer II watches containing this movement were produced over a 22 year period, whether or not it needs servicing is on a case-by-case basis. 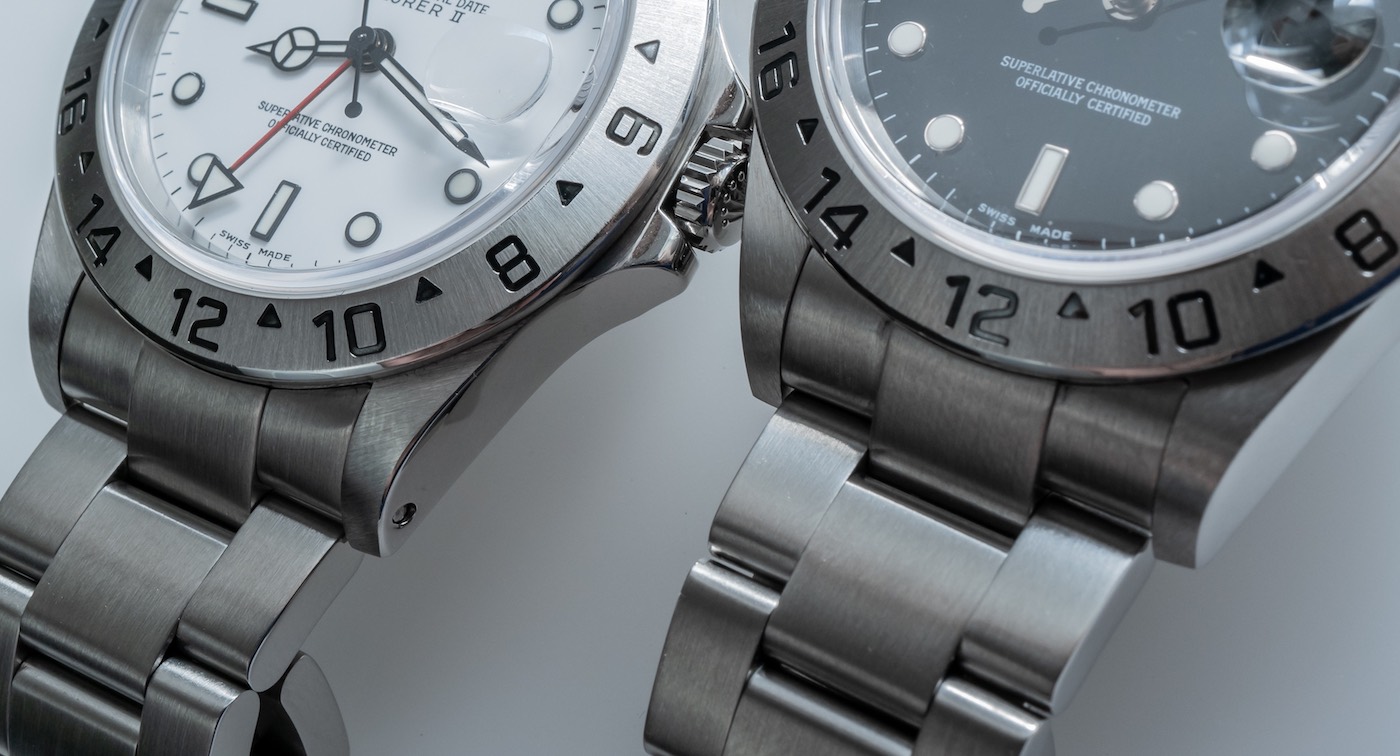 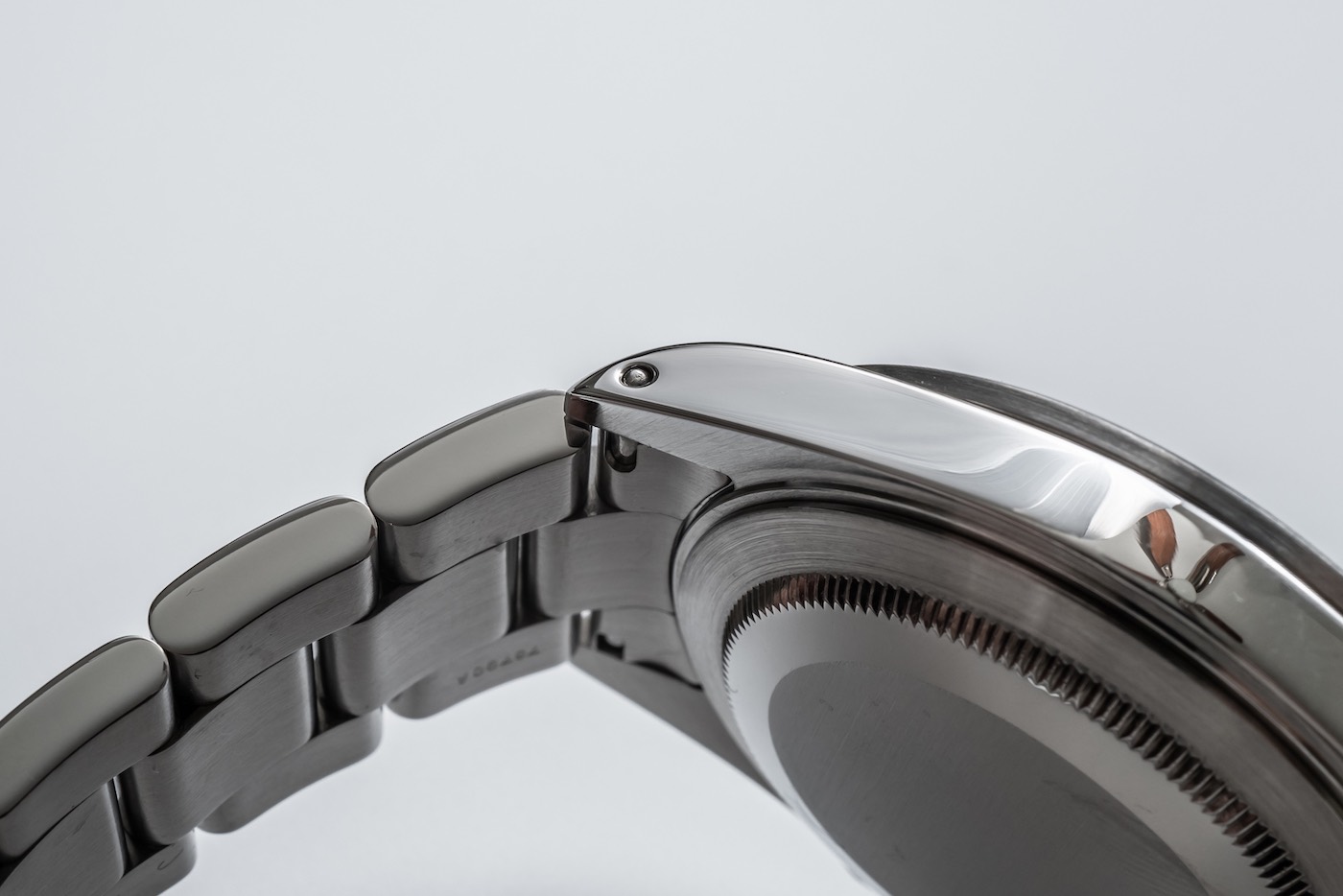 Though they are virtually the same watch, there have been various serial numbers associated with Explorer II 16570 watches over the years that have mostly subtle differences. The polar dial model you see in this article is a Y serial while the black dial is an F serial. While both of these have solid end links, the polar dial Y serial has drilled lugs for easier bracelet or strap changing while the black dial F serial does not. I think a lot of people will opt for the versions with drilled lugs since a new bracelet or strap can totally change the identity of the watch (and honestly, these older Rolex bracelets haven’t aged well). 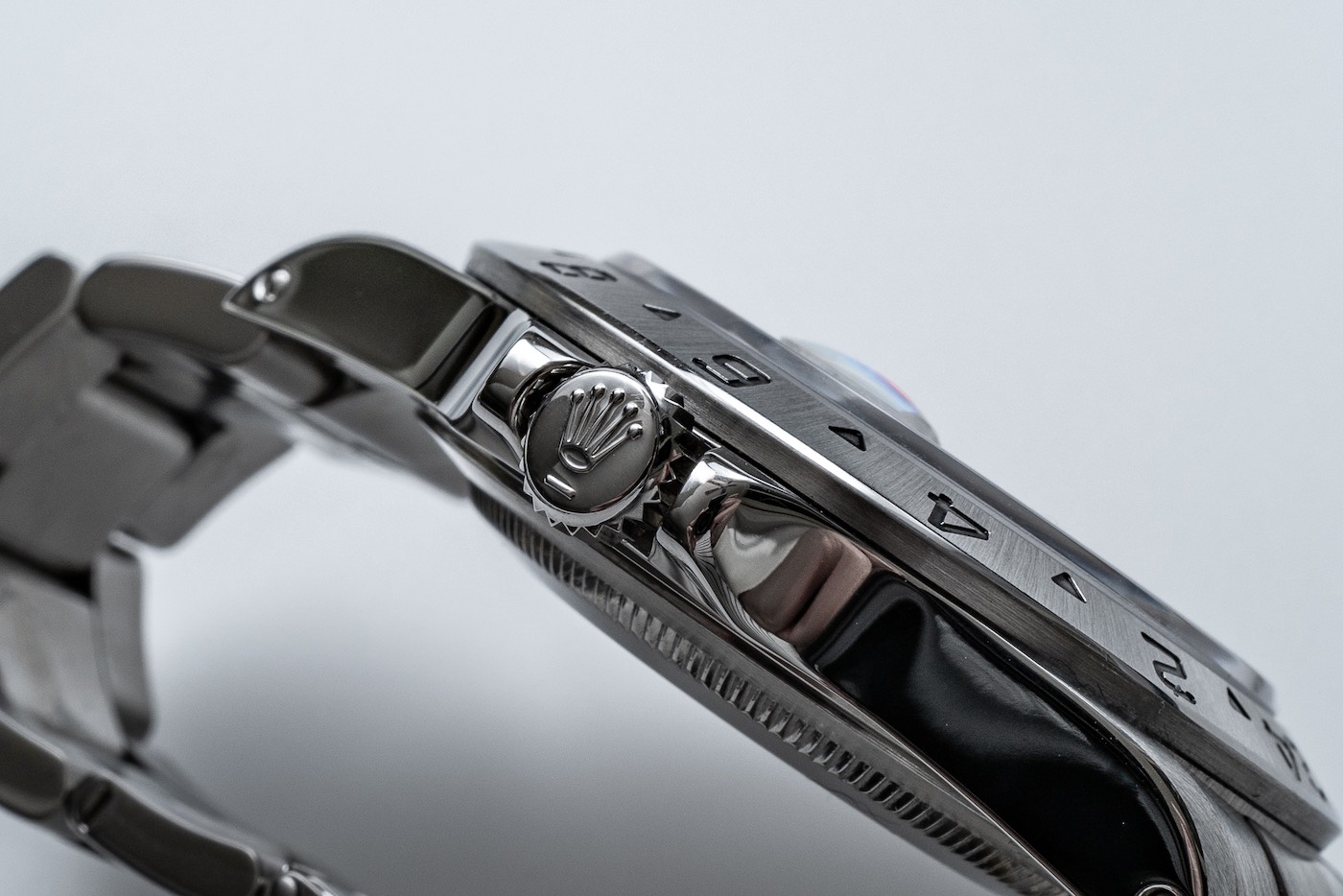 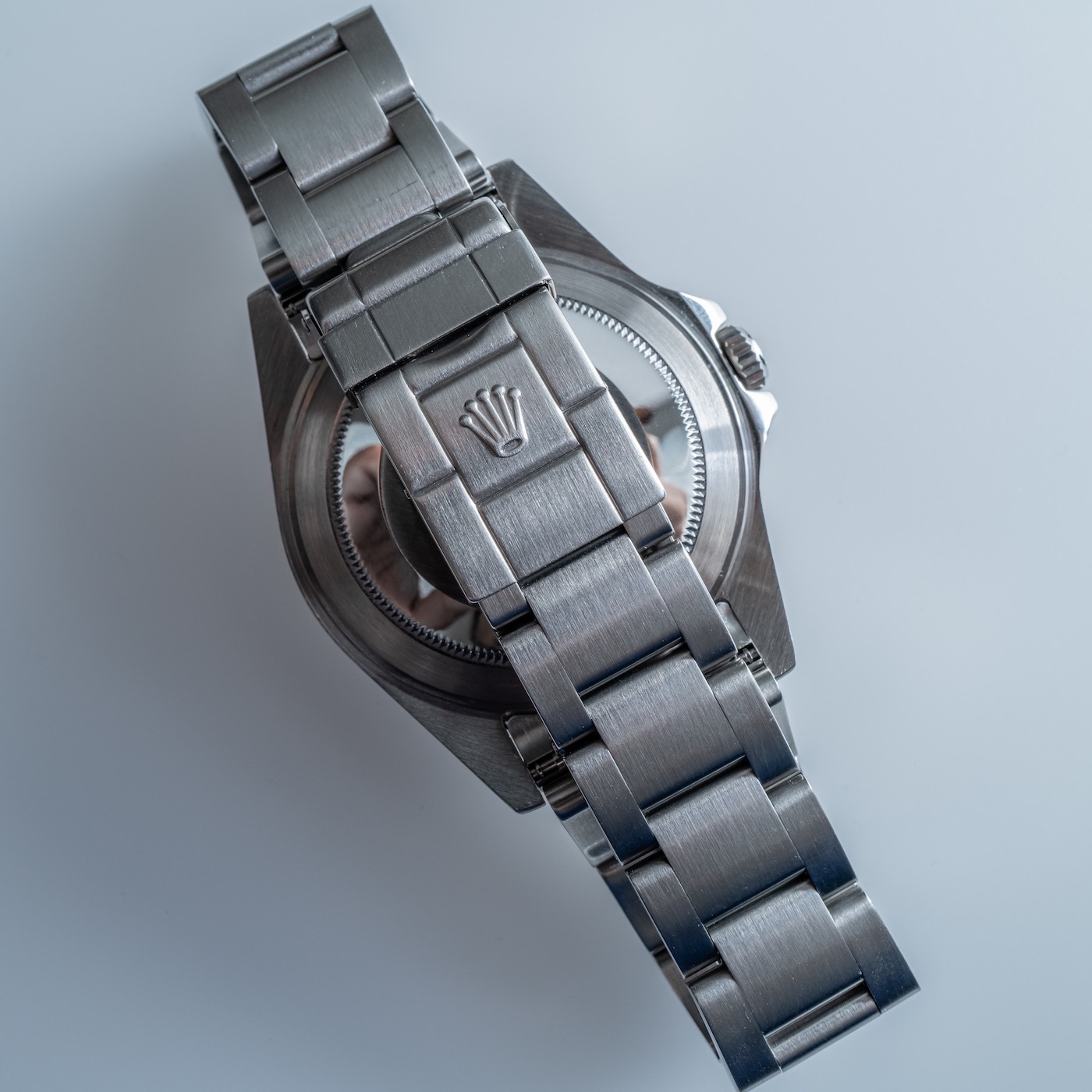 There aren’t many differences between the serials, but there are some. The Explorer II 16570 had tritium dials until around 1999 when they began to use Super-LumiNova — these models also read “Swiss Made” at 6 o’clock.  Also, for models made after solid end links were introduced (around 2000), you will find the 78790A bracelet with  flip-lock clasp. Older models with hollow end links were available with either the older 78360 or 78790 bracelets. 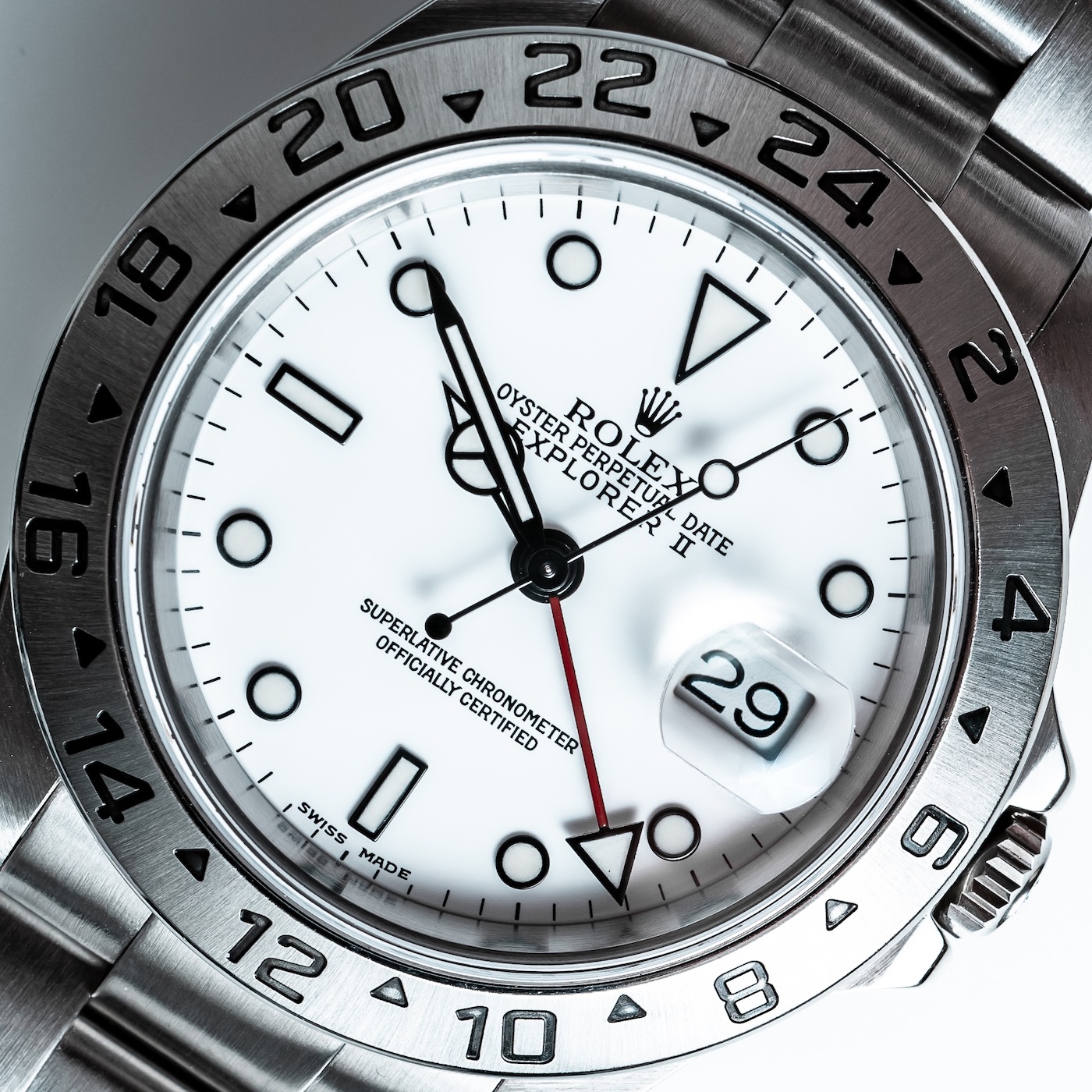 Finally, some of the post-2006 16570 have the caliber 3186 movement, which was upgraded with a parachrom hairspring. There is a bit of a “wobble” from the GMT hand on the 3185 when adjusting the time, which this new hairspring on the 3186 managed to prevent. It’s not a huge difference, but Rolex is constantly improving and reiterating. 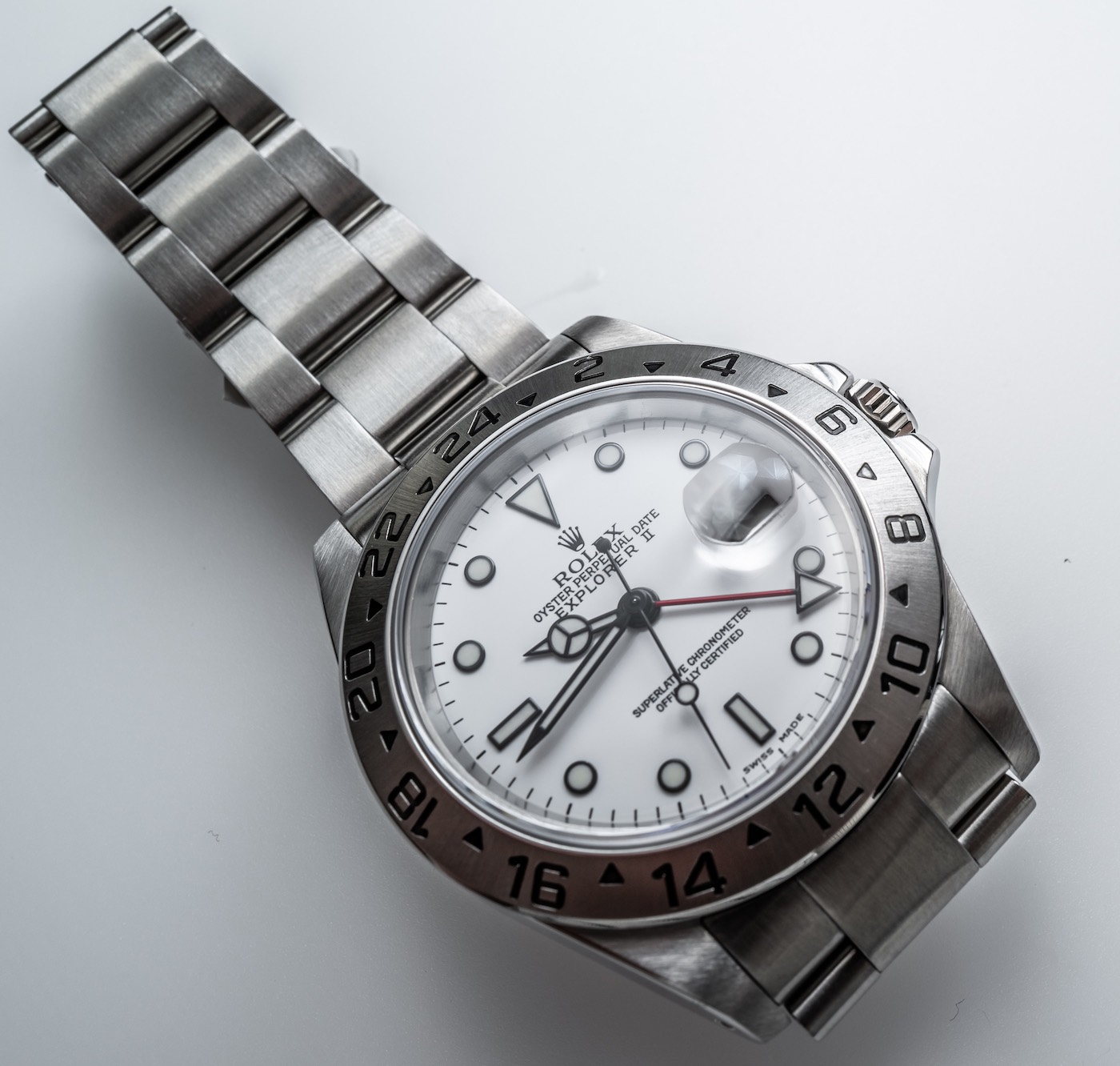 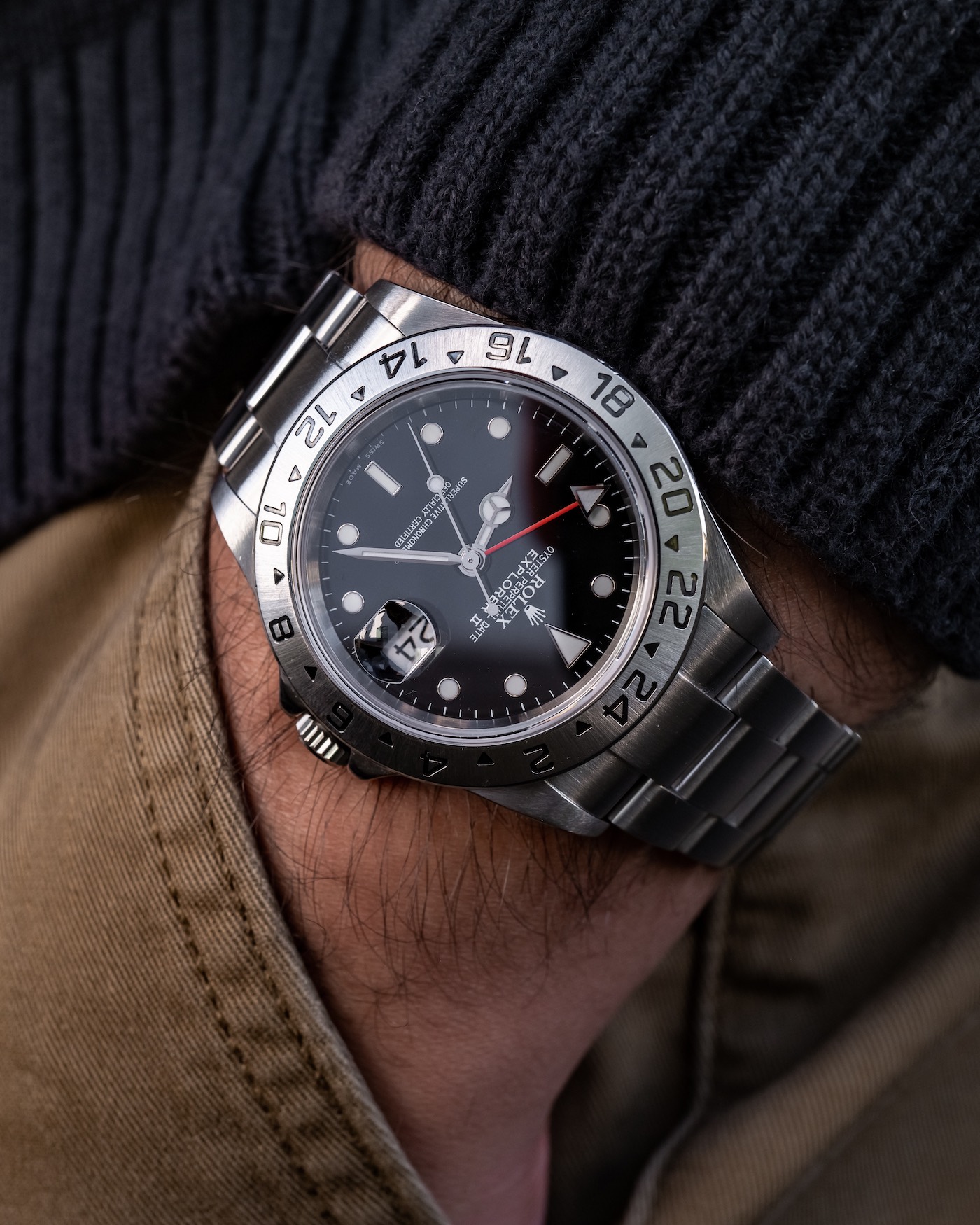 With a simple brushed case and nary any polishing, gloss, or cerachrom (aka ceramic) in sight, the Rolex Explorer II 16570 is in many ways the last of its kind. It’s fitting that it is the last five-digit Rolex reference as well, with the 216570 closing that chapter. Is it still the bargain that could be had for something in the $4,000s? No. In fact, after a quick search, the most affordable ones are just about $5,700 and inching closer to the $6,000 mark. Yes, the price has gone up, but it’s a couple thousand less than the Submariner 16610 and about half the price of a GMT-Master II 16710. As for Explorer II 216570, you’re looking at high $7,000s at the lowest, but that may not even be a consideration if the 42mm case is a dealbreaker.

To close, I’m going to echo what I said at the top of the article: Explorer II 16570 may be the value modern Rolex sports watch out there. You can learn more about modern Rolex watches at rolex.com.