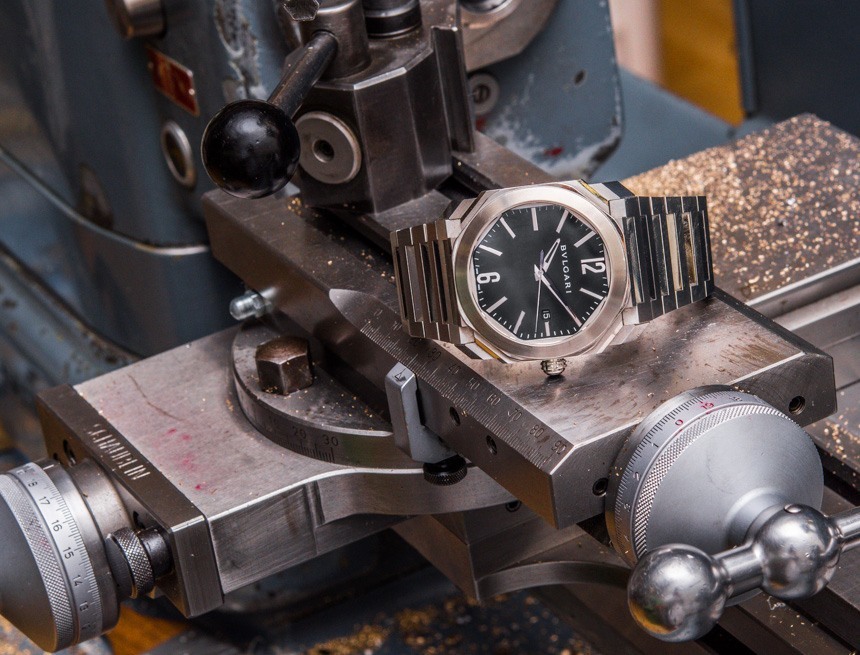 Putting Together The Pieces Of The Bulgari Watch Manufacture Beyond the highly specialized haute horlogerie workshops of Bulgari, the company has established a set of four fully integrated watch manufactures that support not only the atelier where ultra high-end pieces are made, but also the production of most of Bulgari’s other watch collections. Let those be ultra-thin Finissimo watches or models equipped with their base in-house Solotempo calibers: cases, dials, bracelets, bejeweled components and, of course, entire movements are crafted at Bulgari’s four manufactures.

A total of over 350 employees work at the brand’s four facilities and headquarters. Watchmakers, engineers, designers, craftsmen, machine operators, and of course, those running Bulgari Watches’ head offices make up this workforce. The entrance bridge of the Bulgari watch manufacture in Le Sentier

While all four facilities belong fully to Bulgari, they actually are scattered around different locations in Switzerland. The main manufacturing facilities include Le Sentier, where not only workshops responsible for the creation of haute horlogerie movements are situated, but it is also here where parts for the Finissimo and Solotempo movements are produced and assembled. In the company’s Saignelégier facility, platinum, gold and steel cases as well as bracelets are manufactured, while in La Chaux-de-Fonds, at “Bvlgari Manufacture de Cadrans,” watch dials of high-quality, complexity, and truly great variety are created. Last but definitely not least, the company’s headquarters are located in Neuchâtel where, just a few floors below management offices, assembly of watches and final control take place. From “raw” rods of metal, stamped, cut and milled with extremely high precision…

Why does it take four separate, specialized manufacturing and assembly sites to produce the different parts that make up a Bulgari timepiece and complete the puzzle of these hundreds of various components? “In-house” manufacturing has been all the rage in the luxury watch industry since the new millennium, and there are a number of reasons why the tremendous investments and efforts dedicated to the pursuit of so-called “vertical integration” are justified. …To the craftsmen’s touch, as machined, but still rough pieces are hand-polished before they are further quality inspected and assembled.

The primary issue is that while there still are some genuinely high-quality and (more or less) independent suppliers in Switzerland today, in-house manufacturing allows a watch company to more flexibly change its production not just when it comes to volume but, just as importantly, when it comes to developing new designs. The turn-around time from sending a new design to a supplier and then receiving the completed, updated parts is often between 12 to 18 months. By contrast, a dedicated team working at a proprietary manufacturing facility can have those changes made within but a few days – and that flexibility allows them not only to follow (or set) new trends, but also to control quality and make minor adjustments almost immediately. Presently, Bulgari manufactures an extremely wide range of watches, from 1,000-plus-component grand complications, through ultra-slim Finissimo dress watches and iconic trademark designs like Octo, all the way to dazzling and unique diamond-set creations such as the Serpenti. Hundreds of different dials, several dozens of different case designs and a large variety of movement layouts are to be taken into consideration when setting up production – and Bulgari manufactures the majority of these parts in-house; with the exception of some cases and movements, primarily the ones used for ladies’ jewelry watches. Just as much as Bulgari offers a rather unique mix of Italian design and Swiss horological technique, the manufacturing processes of all components also display a bit of a split personality – which, as it turns out, is exactly how it should be done at this scale. The production of cases, bracelets, dials, and movement parts all include both the unsurpassable precision of numerically controlled milling machines or CNCs, as well as the touch (well, more like several hours of painstaking work) of craftsmen and women, who transform the rather soulless-looking, machine-cut pieces into parts that are, on their own, worthy of up-close scrutiny and appreciation. The sheer range of products that Bulgari offers gives one a good idea of the size of this operation: Bulgari presently is a globally represented brand that has been trying to strike the balance between that recognition and maintaining a sense of exclusivity through managing the volume and quality of its production. In other words, Bulgari is powerful and “big” enough to not only consider but indeed create its own vertically integrated manufacture, and it is an operation that runs at a manageable scale that leaves room for the time and work necessitated by the human element throughout the production of each component. All facilities feature modern, state-of-the-art manufacturing equipment, let those be used to cut and shape metals, paint dials, or produce parts so small and fine that they are barely visible to the human eye. And yet, on the other hand, all three production sites (and of course the final assembly and control sections of the Neuchâtel headquarters) rely heavily on the expertise of a total of a few hundred craftsmen. These men and women are just as essential to the production of a Bulgari timepiece as the massive ingots of gold and steel used to produce cases and bracelets. Although the locations may be a bit of a drive apart, there clearly is a sense of companionship and bonding power between these facilities and the people who animate them. When a manufacture becomes dedicated to just one mother company, as was the case with Manufacture de Cadrans, that focus becomes tangible. When visiting any of the workshops of the Bulgari facilities, one will see a large number of the craftsmen wearing watches from the brand; and in reality, what this means is not that they were simply given one, but that they have actually earned them, having spent a number of years dedicating their expertise and efforts to it. And while a large sign above the door may scream “integration,” these little signs and the attitude of the entire team are what serve as true testament. The way cases, dials and movement parts are manufactured, and how the final, complete watches are put together and checked are processes so intricate and detailed, that the way how Bulgari manufactures each of these components in-house will be discussed in soon-to-follow aBlogtoWatch articles dedicated to each of these specific operations. bulgari.com