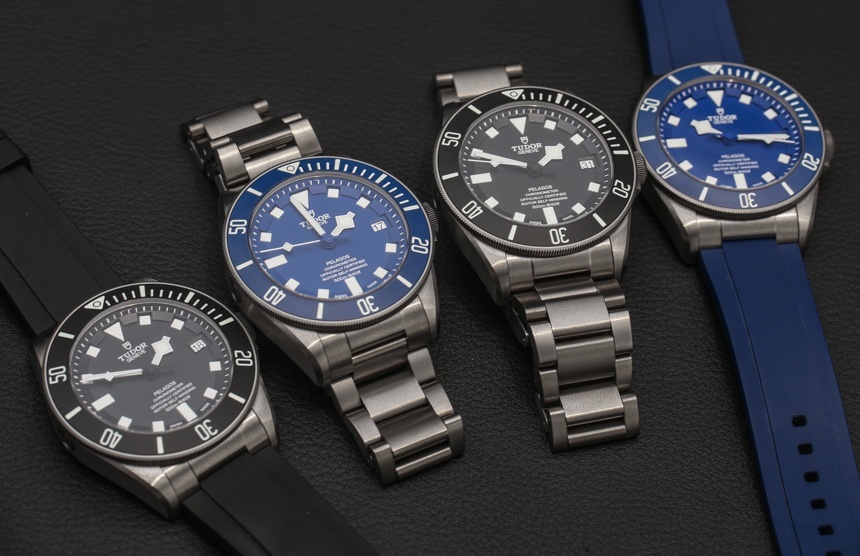 For 2015, Tudor has “reintroduced” the 25600TN & 25600TB Tudor Pelagos watch collection with both a blue-dialed version and a new movement. The big news from Tudor this year at Baselworld 2015 was the introduction of in-house made mechanical movements. Even though Tudor is owned by Rolex, its movements are produced and assembled entirely separately from those of Rolex. As of now, there are no plans for all Tudor watches to contain in-house versus sourced Swiss mechanical movements, but for 2015, the new Tudor North Flag as well as the Tudor Pelagos models receive the caliber MT5621 and MT5612 movements respectively.

aBlogtoWatch last visited the Tudor Pelagos back in 2013 for a hands-on review, after it was first released in 2012. While reviewing it, I learned that its modern yet refined looks appealed to me in a unique way as compared to Rolex’s more expensive and very much “a classic” Submariner. While the Rolex Submariner has a 904L steel case which is 40mm wide and 300m water resistant, the Tudor Pelagos has a 42mm wide titanium case that is water resistant to 500 meters. So let me discuss the differences between the outgoing and now discontinued Tudor Pelagos 25500TN and the new-for-2015 Tudor Pelagos 25600TN and 25600TB watches. To my knowledge, there are exactly four differences between the Tudor Pelagos 25500TN and the Tudor Pelagos 25600TN (which is just the black-dialed and bezel version, while the 25600TB is the new blue version). The first difference is the slightly revised text on the dial, now four-versus-two lines, adding that the movement inside the Tudor Pelagos is a COSC Certified Chronometer and the model name of the watch (“Pelagos”). The second difference, is, of course, the use of the in-house made Tudor caliber MT5612, versus an ETA 2824-2 automatic movement purchased from ETA. The third difference, is a slightly redesigned caseback, necessary because the MT5612 is not the exact same size at the 2824. The fourth new element is the addition of the blue version of the Pelagos that sits alongside the black-dial version. If you are a serious watch person, then you will want to know as much about the movement as necessary – and the MT5612 certainly does not disappoint with its 70 hours of power reserve, 4Hz (28,800 bph) frequency operating speed, and use of silicon hairspring. Each Tudor MT5612 movement is sent out for COSC Chronometer certification, but Tudor proudly announces that in its tests, the MT5612 on average well exceeds COSC Chronometer standards of -4 to + 6 seconds per day by offering an average rate result of -2 to + 4 seconds per day. Overall, that sounds like a pretty nice movement to me. However, unlike the movement in the 2015 Tudor North Flag, this in-house made Tudor movement is not visible through the caseback. Then again, this is a 500 meter water-resistant watch.

For me, the Tudor Pelagos is the brand’s most desirable product at this time, and I was actually surprised by how much I liked the reference 25600TB Tudor Pelagos with the blue dial and matching blue matte ceramic bezel. Blue was certainly an extremely common color trend at Baselworld 2015, with a lot of new timepieces being offered with blue dials. Having said that, I have discussed in the past how difficult it is to get a blue color right. Brands might spin their wheels a bit trying to successfully produce and market blue-dialed watches, but only the best will survive. One difficult part with blue dials, is manufacturing them with consistency. The same exact production process with a tiny viable change can alter the color and ruin the production batch. For that reason, most blue tones are not only hard to find a formula for, but difficult to manufacture in any number. Tudor, of course, explained how they needed to go through hundreds of various blue shades to find this right one.

I don’t know if I would say that I like the black Tudor Pelagos 25600TN better than the blue Tudor Pelagos 25600TB or vice-versa. They are both strong models of their own accord. Having said that, I feel that the blue 25600TN Tudor Pelagos is a bit more distinctive, as there really aren’t other super matte-finished blue-dialed watches on the market that have that slightly three-dimensional feel of the Tudor Pelagos’ face. The decision of whether to get the updated Tudor Pelagos in black, or in the new blue is going to be difficult for people – especially if they have an existing model. To update it with a newer model is reasonable, but completely based on whether or not the person getting it is doing so for the added color or the new movement. If it is the latter, their outgoing Pelagos is probably going to be OK to stick with, unless they are the type of person who always must have the best in mechanical stuff.

The Tudor Pelagos in either black or blue continues to be an exemplary 500 meter water resistant sports watch with its class-leading titanium case (at this price point, it so easily is), legible tool-watch style, and features. Take, for instance, the deployant clasp on the bracelet which has three micro-adjust settings as well as the cool spring-loaded diver’s extension style system which never stops being cool. There is also the fact that Tudor includes both a titanium bracelet as well as rubber strap (with extra diver’s extension piece) with all new Tudor Pelagos models. Price for the 2015 Tudor Pelagos reference 25600TN in black as well as the blue 25600TB is 4,200 Swiss Francs (currently about $4,300), which is actually just a few hundred bucks more than the outgoing model without the in-house made movement. tudorwatch.com