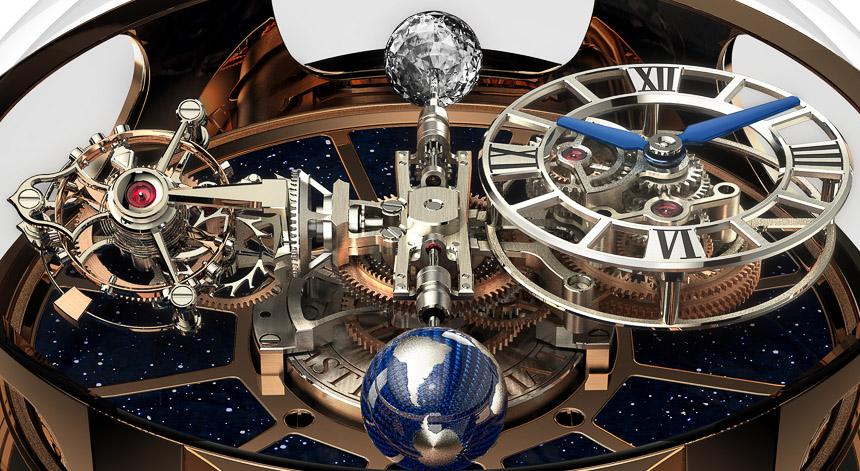 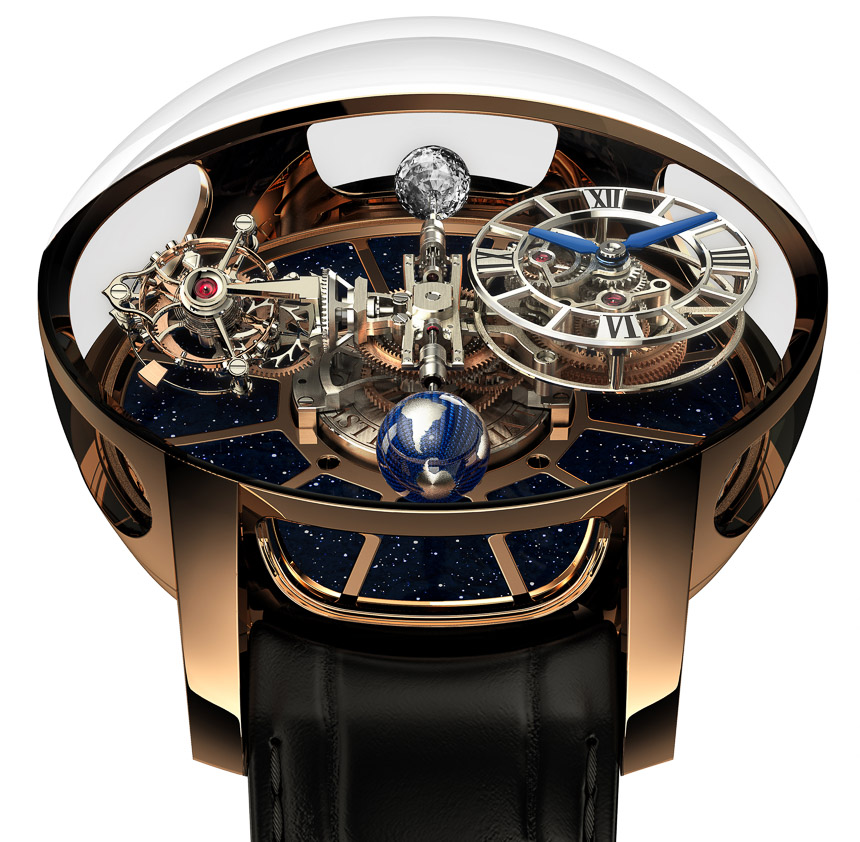 Below, you can see a video from last year of the Jacob & Co. Astronomia Tourbillon in action. Much of the movement is placed on a series of four arms that rotate around the entire dial each 20 minutes. Those arms also move to create other actions such as keeping the dial to indicate the time in the proper orientation, as well as operating the tourbillon. Taken together, the entire ballet of gear work in the Jacob & Co. Astronomia Tourbillon is almost hard to believe. More so, as much as you may like or be ambivalent to what Jacob & Co. produces, you have to give it to them that they understand showmanship is an important part of the luxury watch industry. 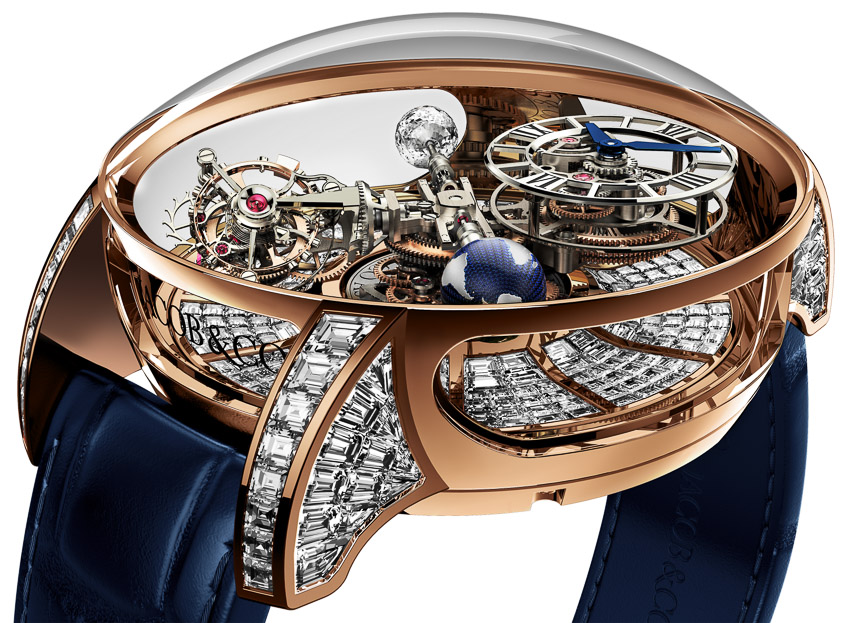 Compared to the large sapphire crystal bubble dome over the initial Astronomia design, this new 2015 case makes a bit more sense. We are still looking at computer renders, but I am confident that the smaller pieces of sapphire crystal (which are now divided into a series of windows and one large one over the top) with the additional metal makes for a more plausible, wearable design. According to the brand, the Jacob & Co. Astronomia Tourbillon is 50mm wide and 25mm thick. The case is in 18k rose gold, and there is a version with and without diamonds.

Notice the lack of crowns or pushers on the case? The movement is actually set and would via two “bow-style” fold out crowns on the rear of the case. The movement, which is, of course, the most interesting element of the Jacob & Co. Astronomia Tourbillon, is the exclusive to Jacob & Co. caliber JCEM01, with 48 hours of power reserve and a tourbillon that operates at 2.5Hz. Surprisingly, the movement is produced from just 235 parts – which seems very efficient given the complexity of the concept. 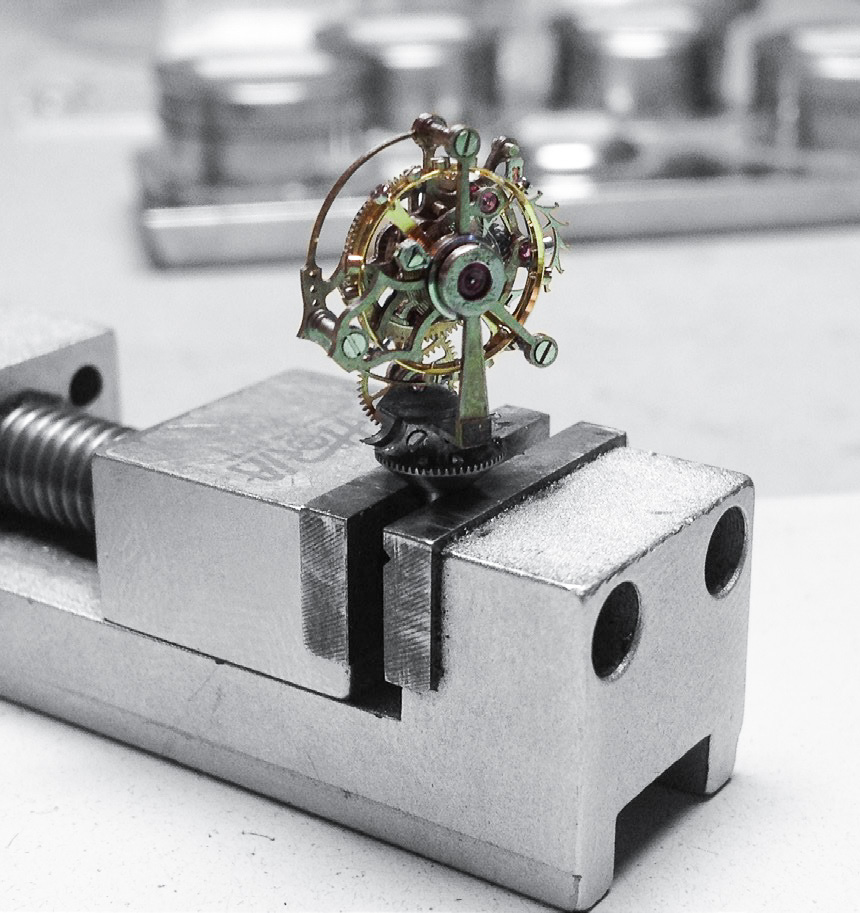 Technically, because the tourbillon moves around the entire dial each 20 minutes, it is a triple axis tourbillon. The other axis is the normal spinning you see from a tourbillon cage, as well as being spun in its connection arm. It sits opposite the dial for telling the time to help balance out the weight. The other two arms have a small hand-painted titanium representation of earth, and its opposite arm has a rotating disco ball that makes one full rotation each 60 seconds.

Really, disco ball? Well, that is what I am calling it. Jacob & Co. claims that the spherically cut diamond uses an exclusive cutting process debuted by Jacob & Co to cut a diamond with 288 facets. This round diamond is supposed to represent the moon – which makes me wonder what “night life” would be like on your planet if our moon was actually a large disco ball too. While the Jacob & Co. Astronomia Tourbillon movement looks and sort of feels like it offers astronomical complications – it really only does so in concept. This is really a movement made for viewing pleasure, versus strict functionality – and in that, it succeeds. 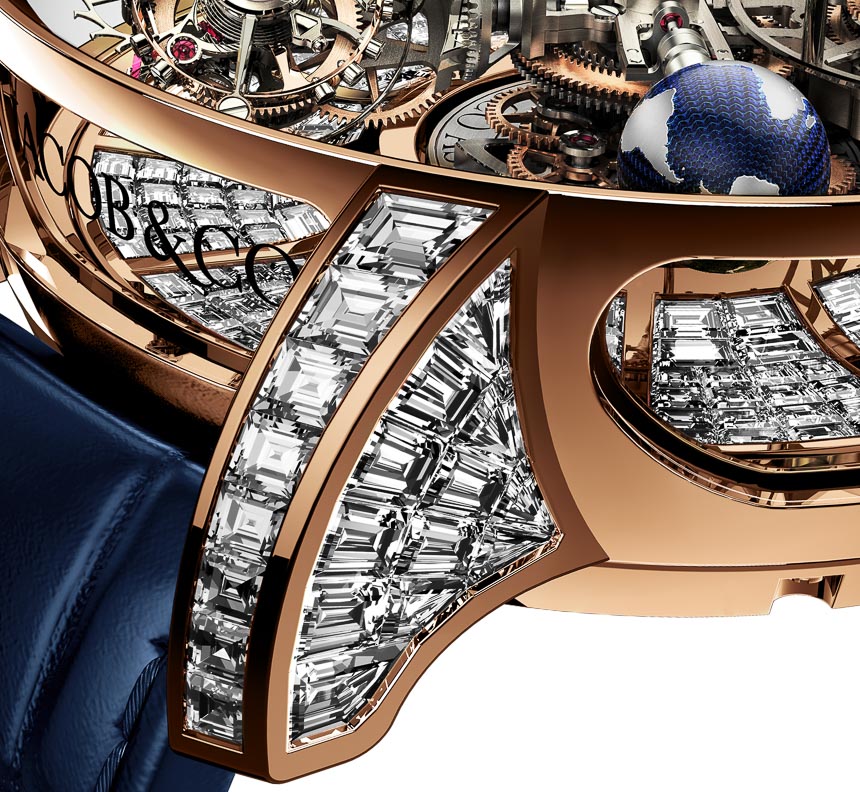