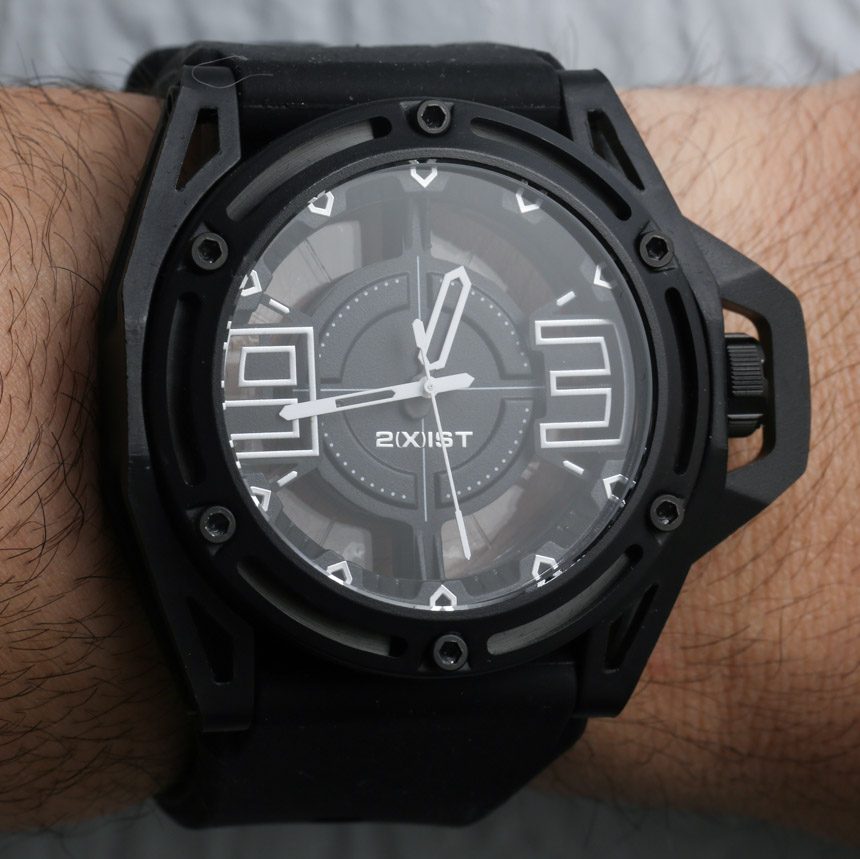 It has probably been about a year now since I first heard the news that underwear maker 2(X)IST was about to release a wristwatch. The announcement did make me do a double take. I thought, “what’s next, is Fruit of the Loom going to make a line of shotguns?” 2(X)IST was actually serious about it and wanted to not only have a watch, but one that would be unique and have wide appeal. Someday I’d love to hear the inside story. What really caught my attention though was who designed the watch. Called the New York City, the 2(X)IST watch collection was dreamed up by Jason Wilbur, the same guy behind the Devon Tread 1. Now that was interesting.

2(X)IST wanted the New York City watch to be affordable. At under $500 some argue that it is expensive for what it is, but I found the collection of eight initial pieces to be fun, and appealing for the right people. Perhaps traditional watch lovers will not be drawn to the boy-hero looks and large plastic case (on some models), but they are interesting, bold, and anything but ‘follow the leader’ when it comes to their concept. 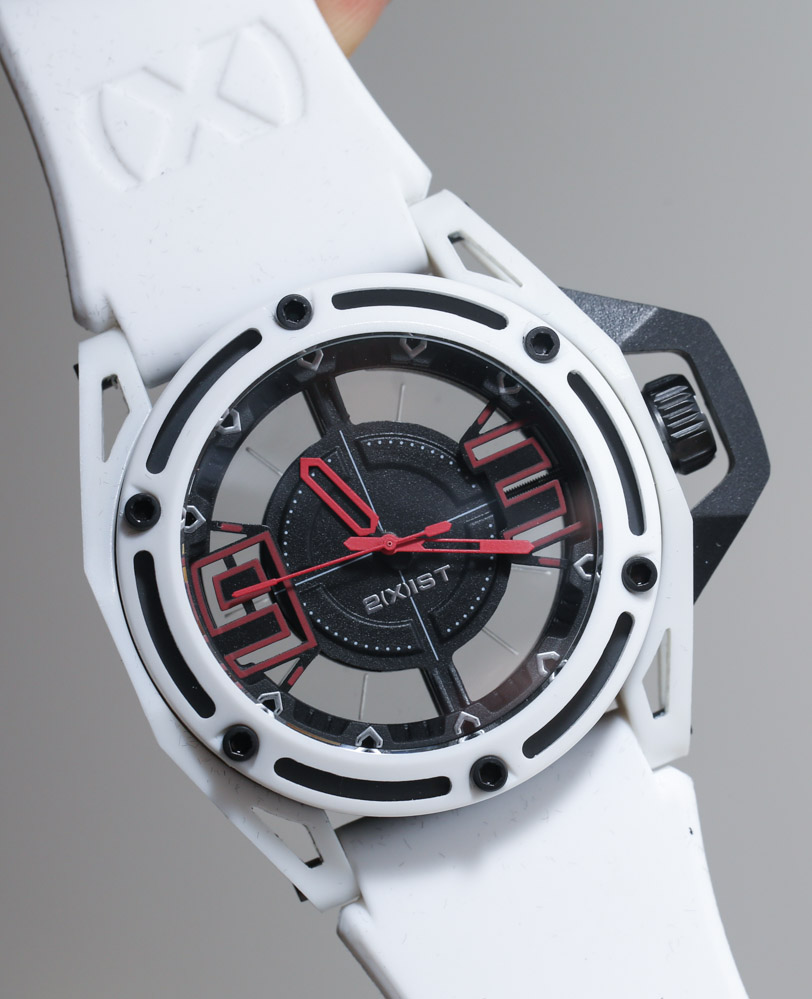 I wanted to include a picture of one of 2(X)IST’s more common products in this review so you could compare the watch with the underwear. After spending a few minutes on Google and 2(X)IST’s own website, I quickly abandoned that idea. Not that there is anything wrong (in theory I guess) with male models whose entire torsos have been waxed , but when viewing ‘watch porn’ I don’t think people want to mix that with similar imagery… intended for a totally different audience. Let’s just say that 2(X)IST watches seem to have little in common with their “male intimates” clothing products.

This is clearly 2(X)IST’s first foray into watches, and I think they are off to a good start. Though some little mistakes, especially in terms of packaging are apparent. You may notice little pieces of black lint on the trio of watches we received for review. That is from the faux-velvet interior of the boxes that is a terrible complement to silicon or plastic. The metal-cased New York City watches fare better, but imagine getting one of those lovely all-white models, only to remove it from the packaging with stubborn pieces of black link stuck all over it. Sure you can rinse the watch off, but no one wants to do that. I’d attack the watch with one of those compressed air blowers to clean it most likely. There is also the matter of the 3D glasses that came in one of the boxes. I still don’t know what those are for, but I really hope it isn’t for viewing more pictures of dudes wearing underwear. 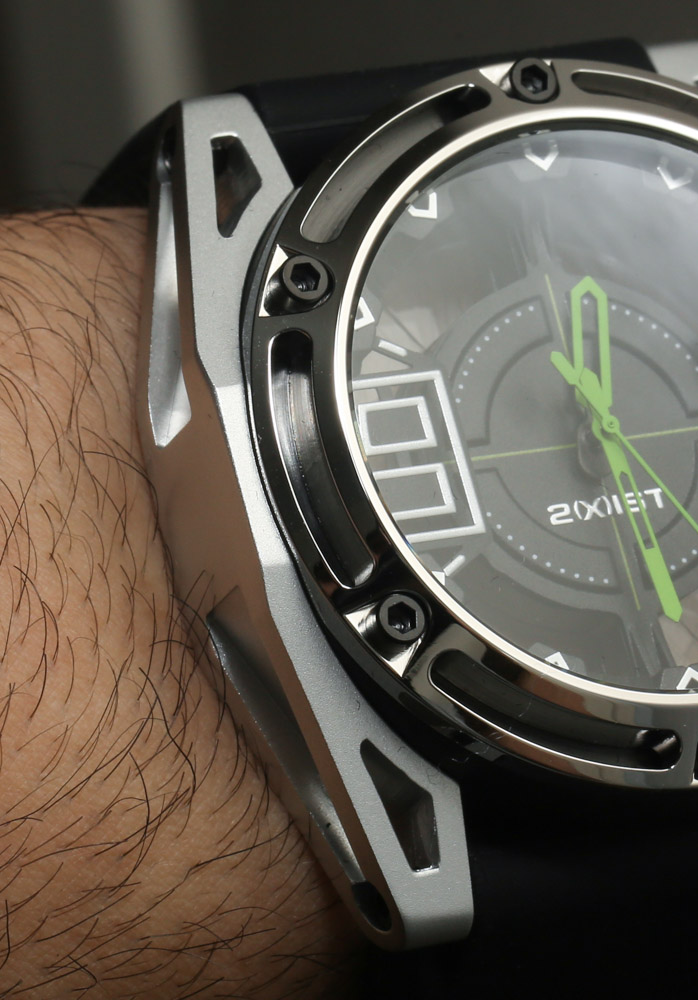 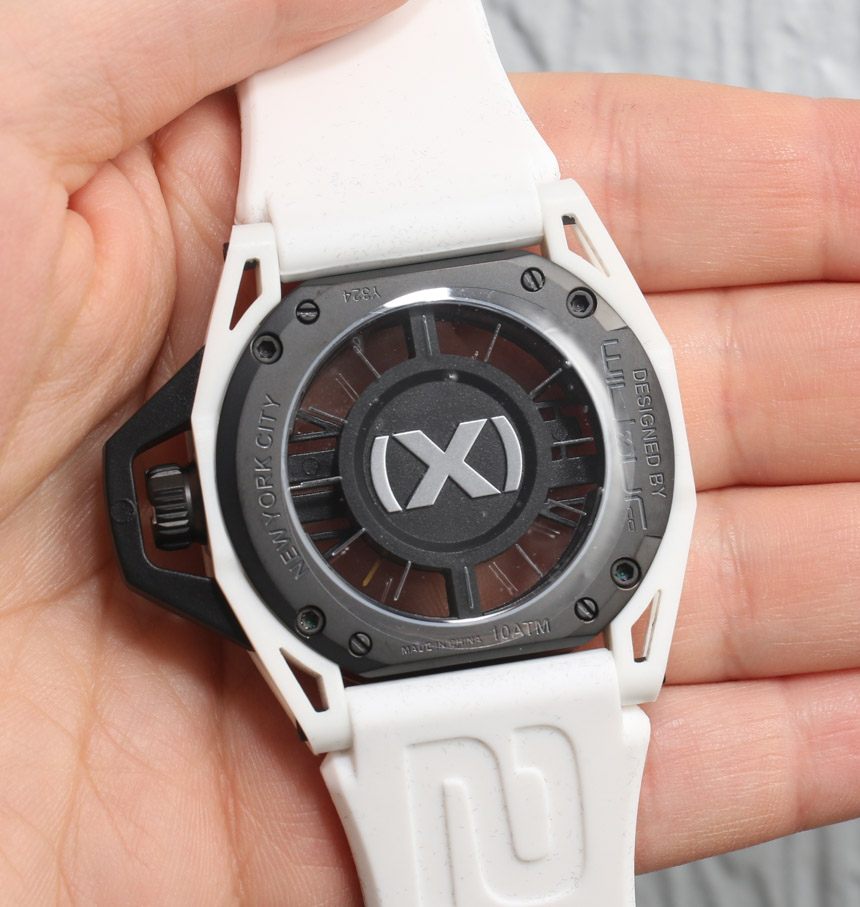 One element of the watch that does coincide with the underwear is the strap. Like the waistband on the briefs, you have a large “2(X)IST” logo on the (thankfully) inner side of the silicon strap. Aside from that, this is a unique experience. The case design takes the most inspiration from Linde Werdelin actually, notably the Spidolite (you can see our review here). We like it when interesting boutique brands get “homaged” as opposed to the big guys. This isn’t exactly a budget way of wearing a Linde Werdelin, but it is sort of close.

The New York City watch is 44mm wide but wears larger thanks to the large crown guard and wide, long lugs. I’d say if your wrists are 6.75 inches or under you may want to try one on first before buying to ensure the lugs don’t jut out past the edge of your wrists. Like the Linde Werdelin Spidolite, the New York City watch has a lot of case skeletonization, and a bit of that in the bezel. It makes for a cool look, and in terms of style, there is something to be said about it working better in an inexpensive watch as you may not want to wear something like this on a daily basis. 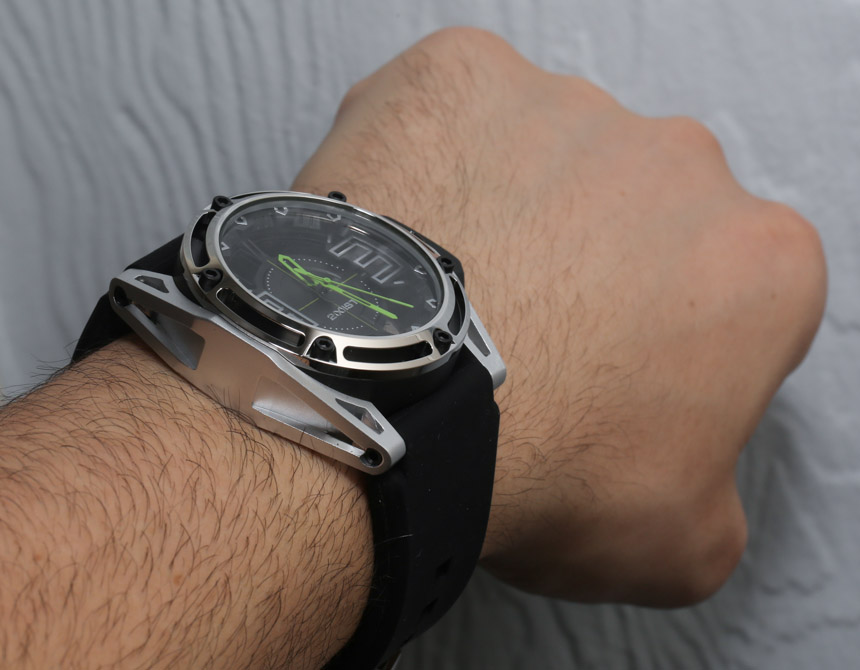