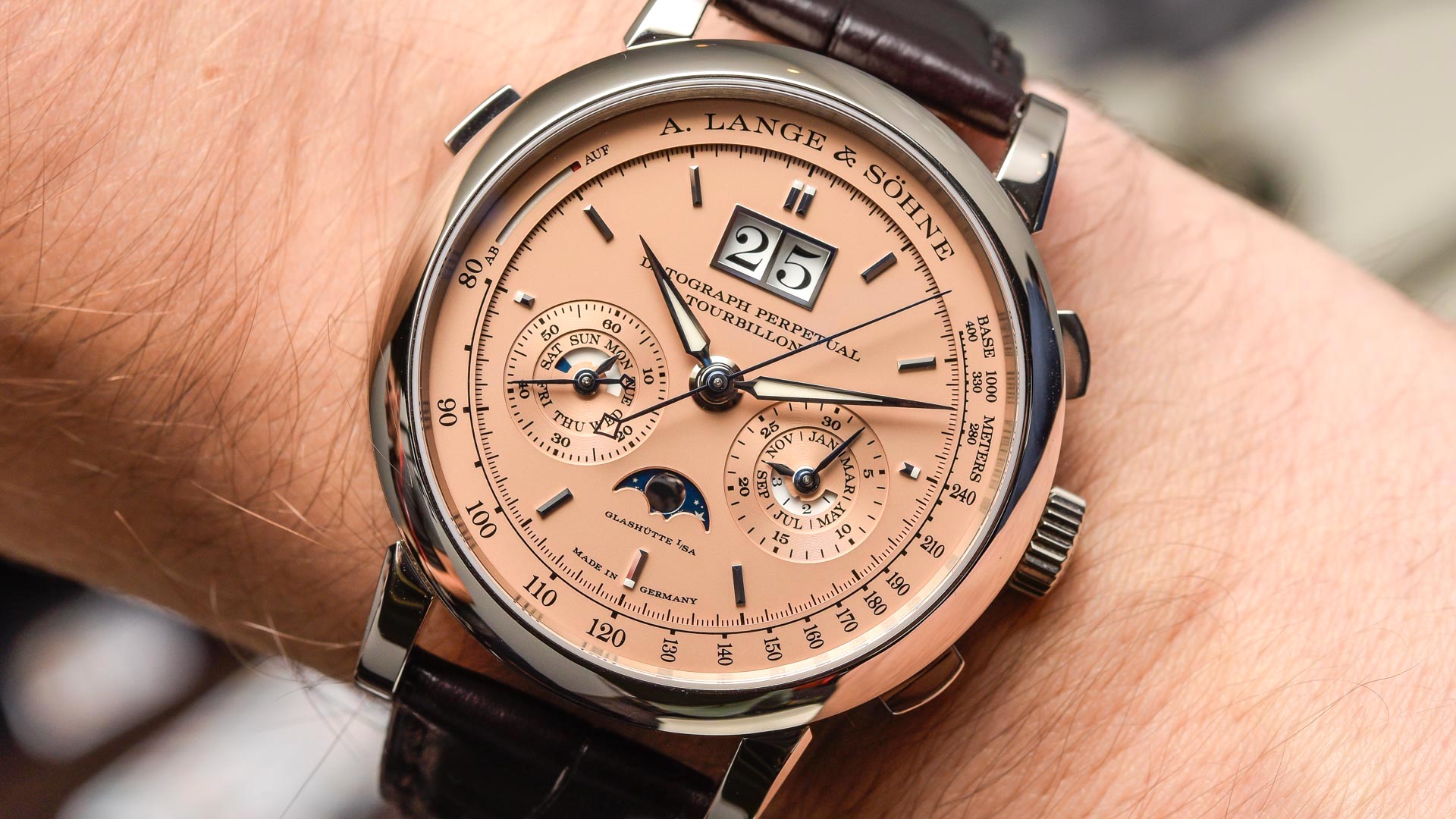 Fawning over an A. Lange & Söhne watch is not a rare experience for me — even if actually being able to handle some of their most impressive creations is. The storied German watchmaker always puts so much personal pride in its most elaborate products that it can be hard not to agree with their team members in regard to just how lovely the watches are. The Datograph Perpetual Tourbillon — with its new limited-edition ref. 740.056 for 2019 — is always a crowd-pleaser. This highly complicated A. Lange & Söhne chronograph, perpetual-calendar tourbillon was originally released as a new model in 2016, and for 2019 it arrives with an 18k white-gold case with an attractive two-level pink-gold dial (that some people like to refer to as “salmon-toned”). 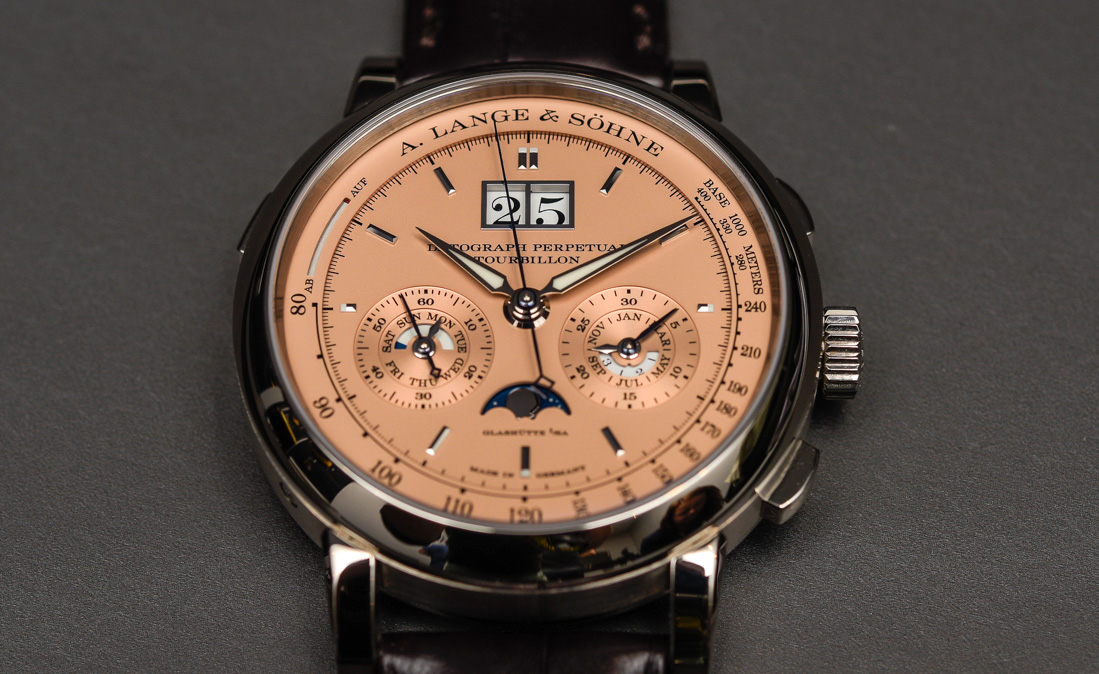 There are a few historic watch dial colors that provide a good contrast for hands, and this “rose Champagne” color is one of them. White gold with blued-steel hands and applied hour markers contrast very well against the solid pink-gold dial. The Datograph Perpetual Tourbillon is wearable, but among the larger pieces A. Lange & Söhne produces. I would say that, in my experience, it is among the most wearable “high complication” pieces the Glashutte-based brand produces, in terms of size. 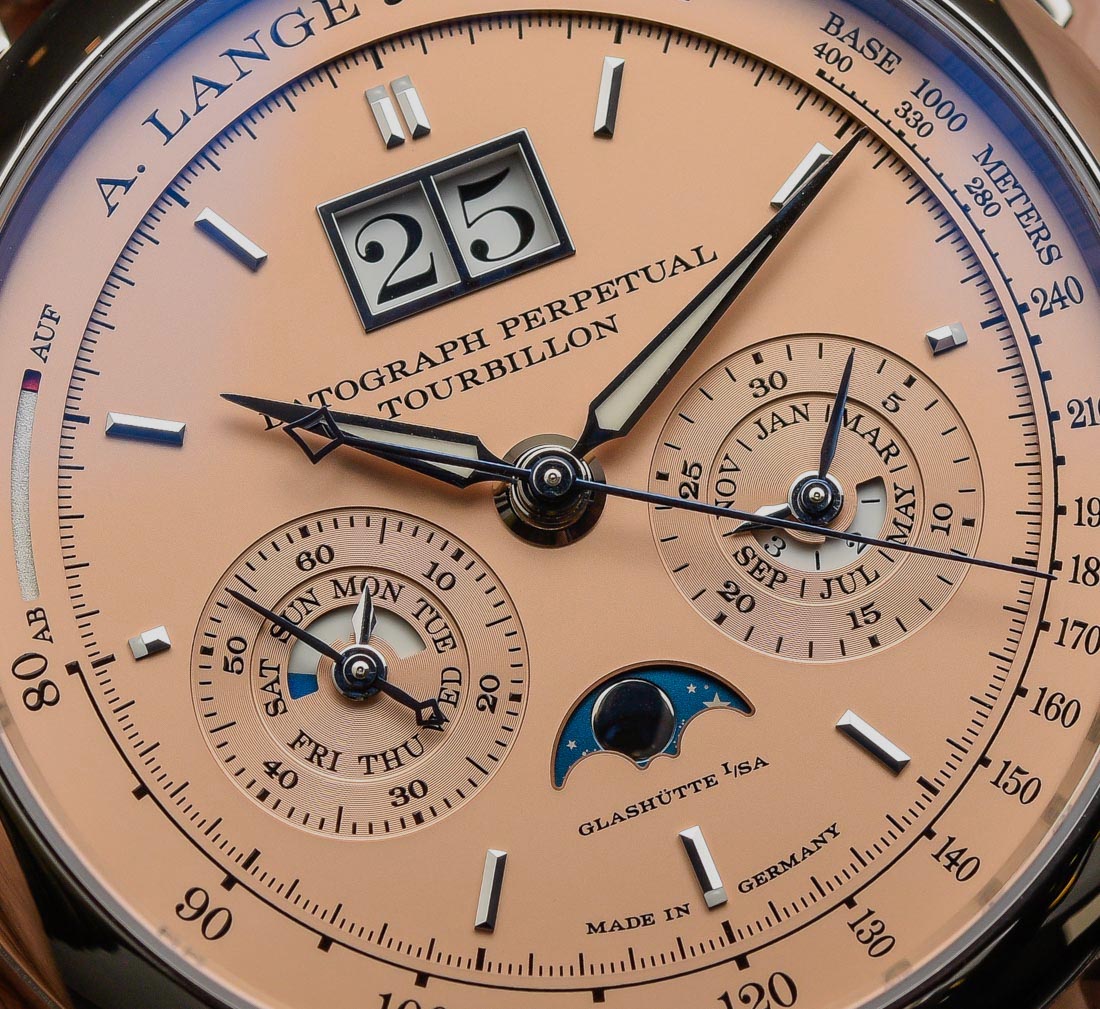 What made this watch interesting when it was first released was the de-emphasis of the tourbillon. While there is a statement on the dial that says “tourbillon,” the view of the spinning regulation system is only visible through the rear of the case. When tourbillon mechanisms first showed up in wrist watches in the 1990s, it was not uncommon for the tourbillon to be only visible through the rear of the case. As the tourbillon became more of a “look at me” luxury status symbol, it became the norm to put tourbillon mechanisms on the dial — or rather to leave an opening in the dial that offered a view of the movement. 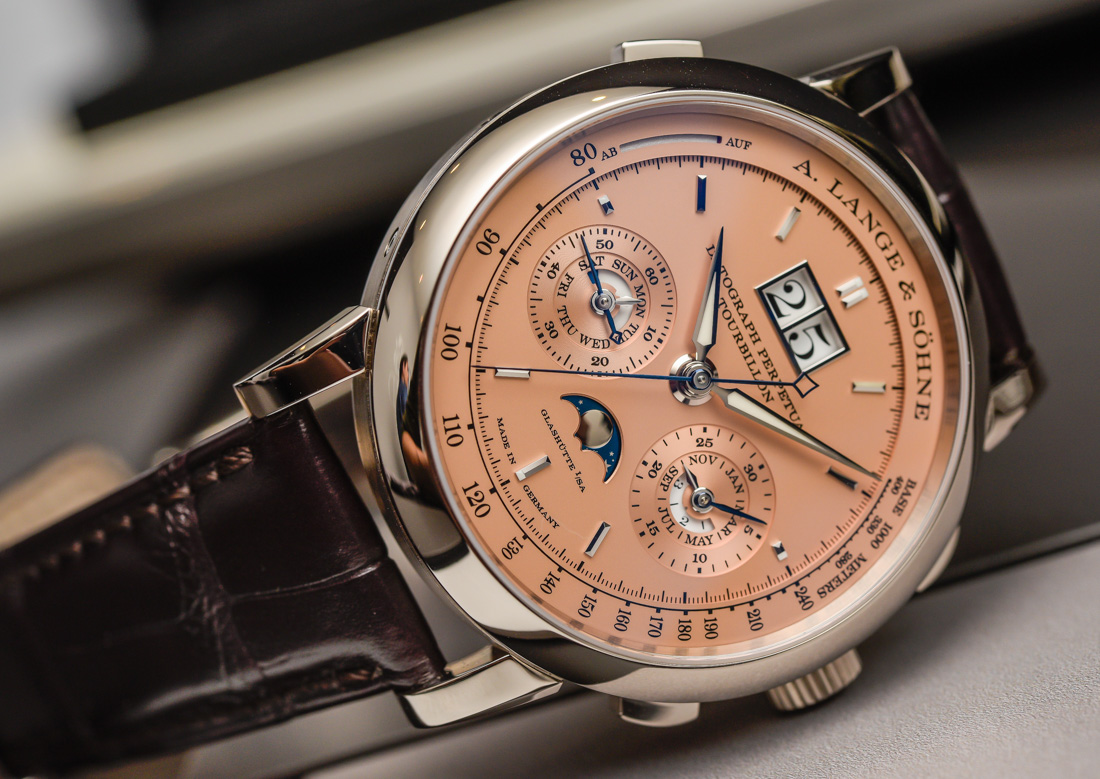 A. Lange & Söhne’s official reason for not showing the tourbillon on the dial of the Datograph Perpetual Tourbillon is that “it wouldn’t fit.” Sure enough, the dial is complete without a view to the regulation organ, as it not only has the typical chronograph and perpetual calendar indicator but also a few more pieces of information to show, as well. The elegant and classically styled dial features the time with a subsidiary seconds dial, 30-minute chronograph, leap year, big date, month, day of the week, moon phase, and day/night indicator, as well as a discreet power reserve indicator located on the periphery of the dial between roughly 9 and 10 o’clock. 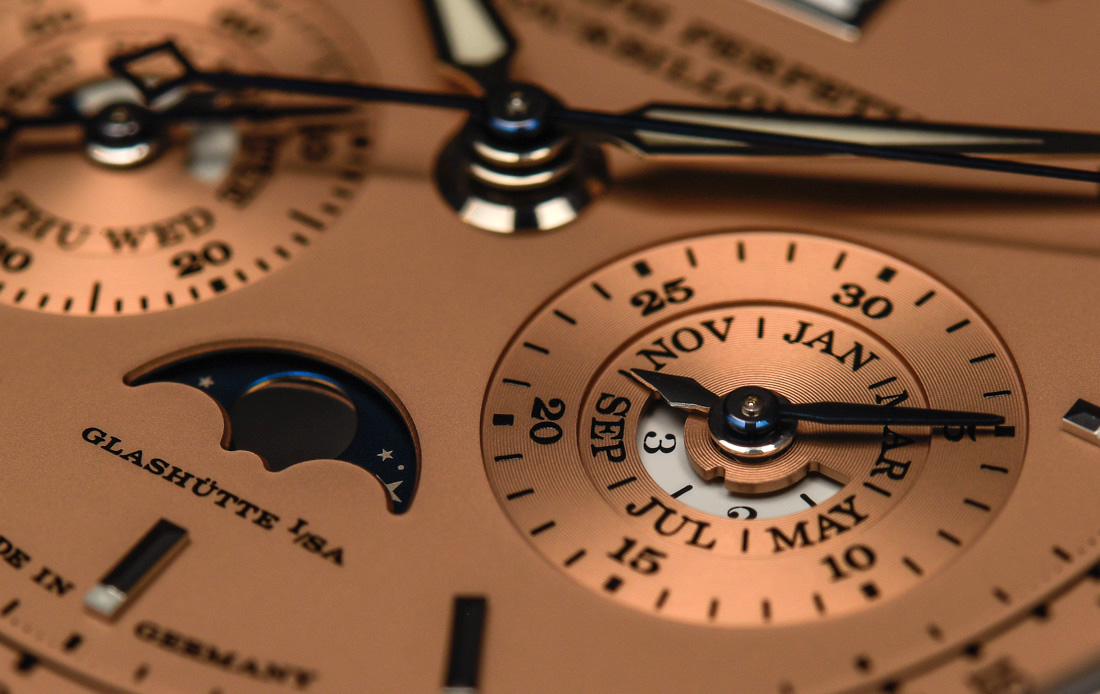 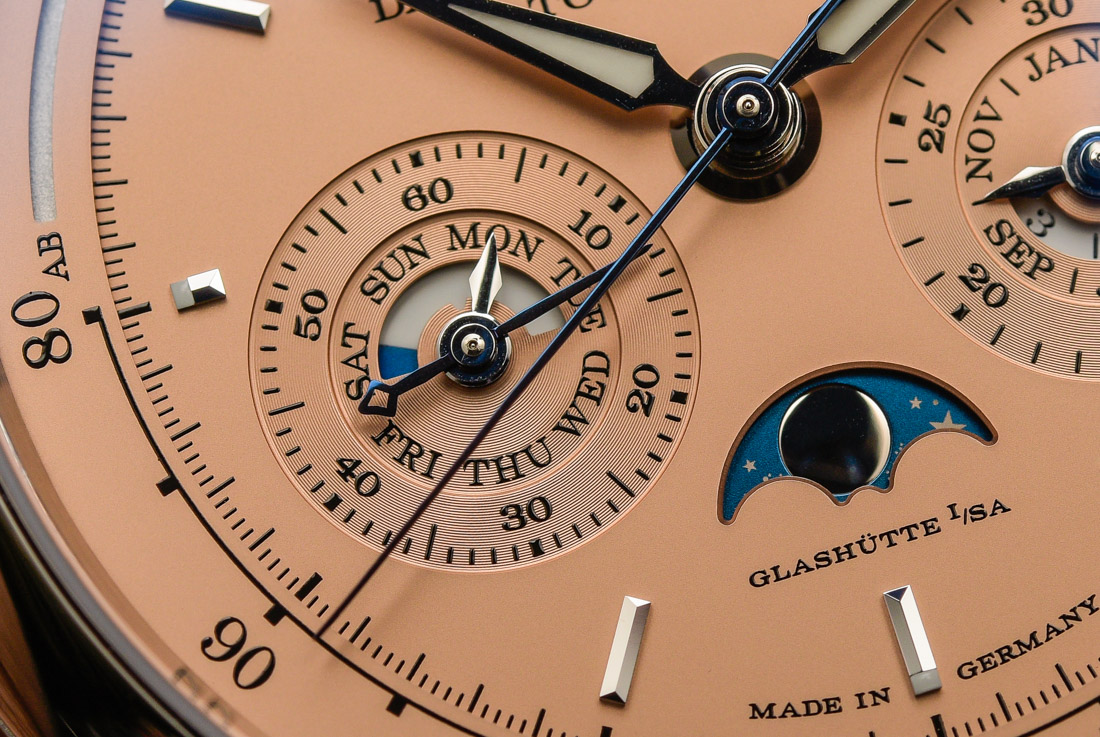 Despite all of this data (and lumed hands and some lume points on the dial), the Datograph Perpetual Tourbillon has a clean, legible look to it that is far removed from many other highly complicated watches that strive for a cluttered (as opposed to composed) look. A product like this also hearkens to A. Lange & Söhne’s mantra of “stealth wealth,” by offering a truly exceptional timepiece creation that nevertheless calls little attention to itself when viewed by a layperson. 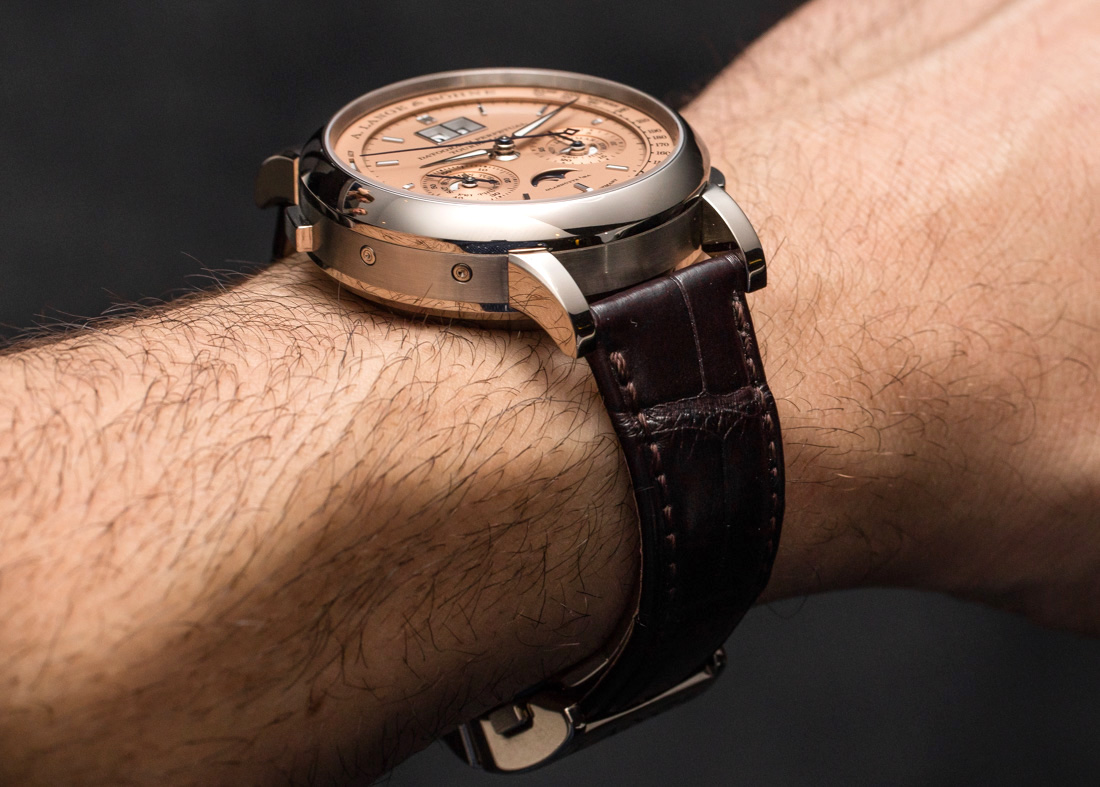 On the wrist, the A. Lange & Söhne Datograph Perpetual Tourbillon is 41.5mm-wide and 14.6mm-thick. That is hardly massive in the scope of large watches, but it’s about the limit for a dress watch. That said, I think A. Lange & Söhne should be credited for an effort to create something relatively compact. Now in 18k white gold, the 2019 Datograph Perpetual Tourbillon is going to be a bit less weighty on the wrist than the original platinum model that was the ref. 740.036 (and it also costs a bit less, given the increased cost of platinum). Attached to the case (and matching the pink-gold dial quite nicely) is a deep brown alligator strap. 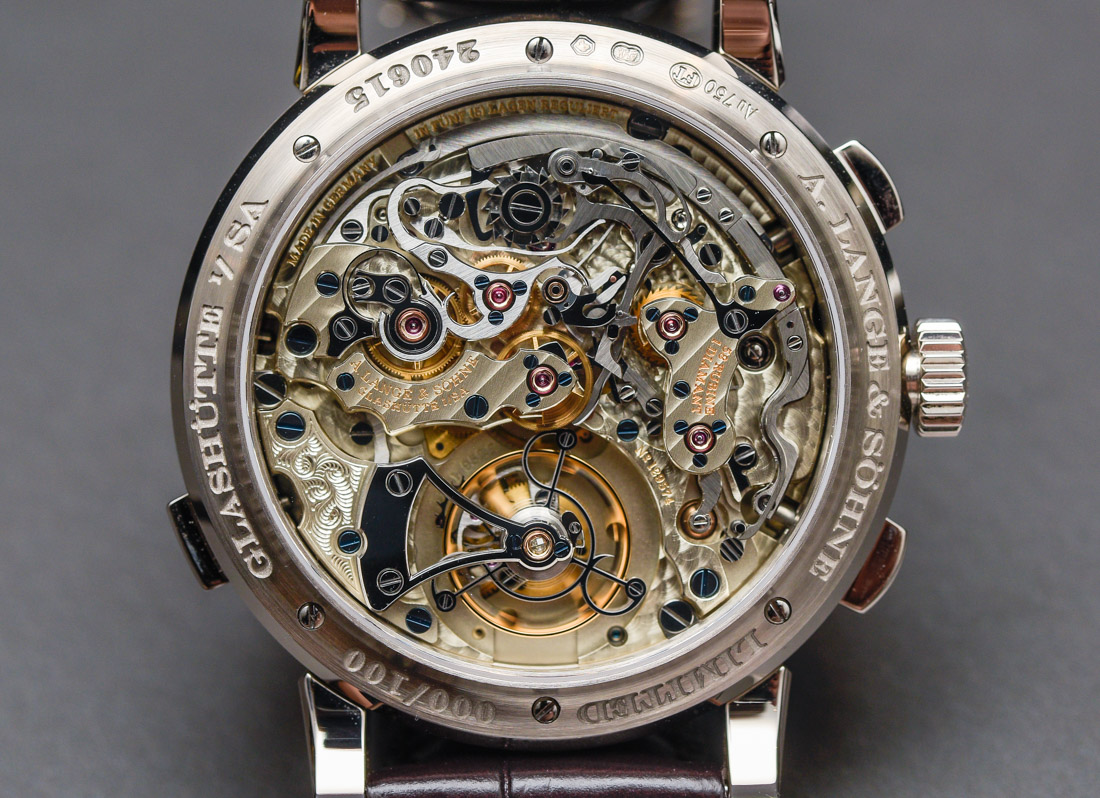 Turn the calming and confident Datograph Perpetual Tourbillon watch dial over, and the real show begins with the expansive view of the in-house made A. Lange & Söhne caliber L952.2 manually wound movement. Gorgeous in both design and meticulous hand-finishing and decoration, the movement is also complex, comprised of no fewer than 729 parts. In addition to the “standard” great view that Lange movements provide, the L952.2 is distinctive, as well, because of its animated tourbillon. Blued-steel screens and g0ld chatons populate the surfaces of the German Silver movement bridges, and parts of the movement near the bridge are hand-engraved with arabesque motifs. 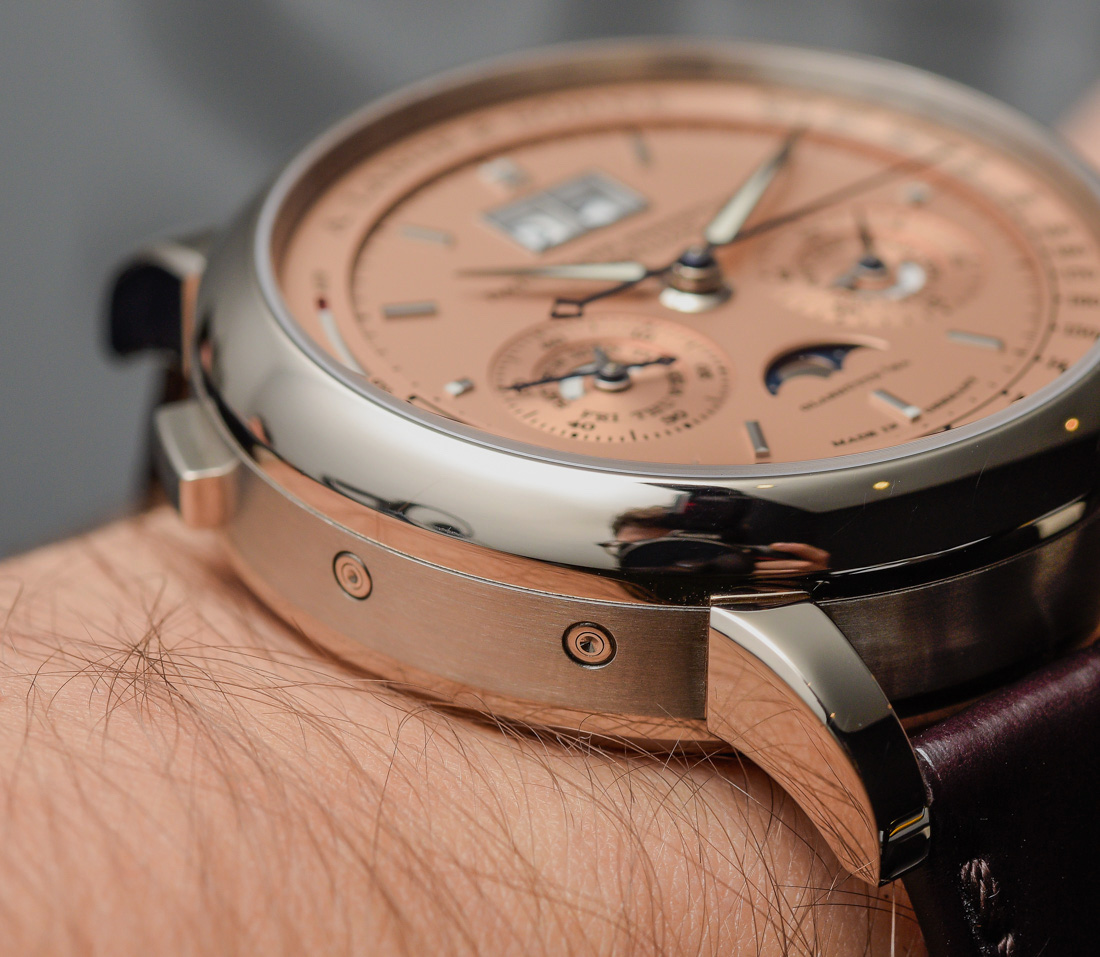 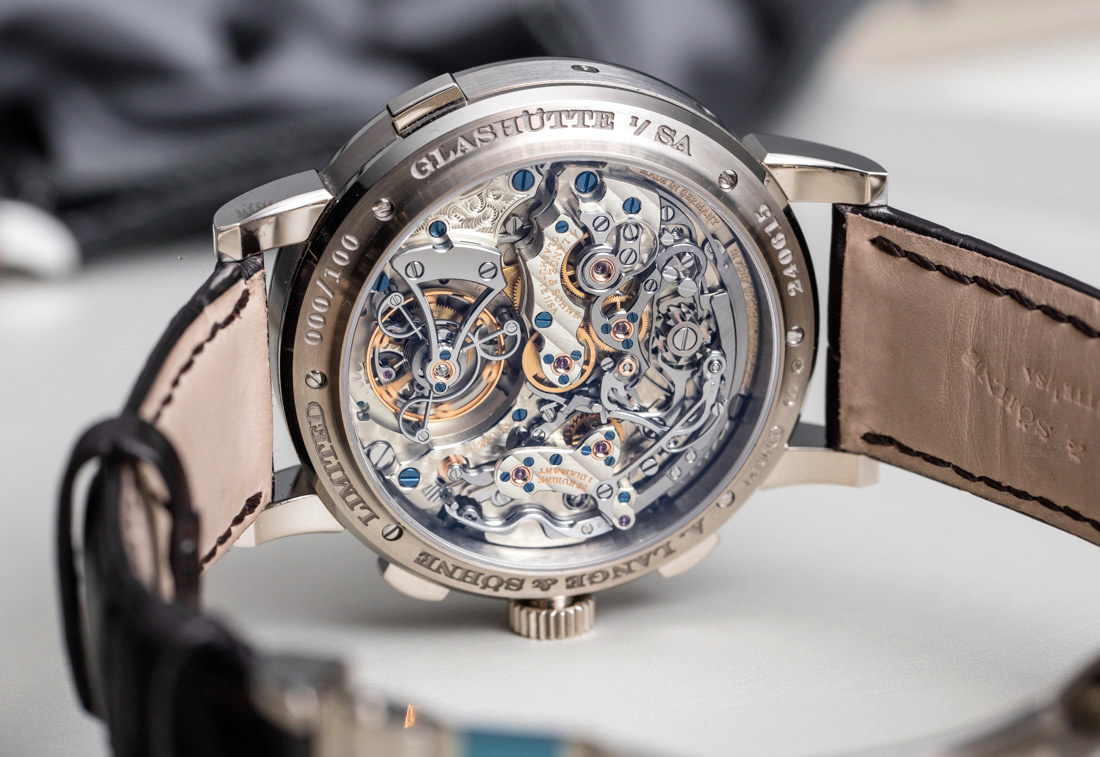 Performance-wise, A. Lange & Söhne built in a few interesting convenience features into the movement. These include just three inset case pushers and the crown to adjust all the complications, with another pusher on the case intelligently used to advance all the calendar functions at one time. This makes resetting the calendar and moon phase much more convenient when you know the number of days that have passed since the watch showed the right time. Another feature included in pretty much all A. Lange & Söhne tourbillons is a hacking seconds feature — which is very uncommon. This means that the tourbillon stops when you pull the crown out, and most tourbillons don’t have this feature. Note that the end-stone at the pivot-point of the tourbillon, where the top bridge connects to it, is a diamond for A. Lange & Söhne tourbillons (as opposed to a synthetic ruby). 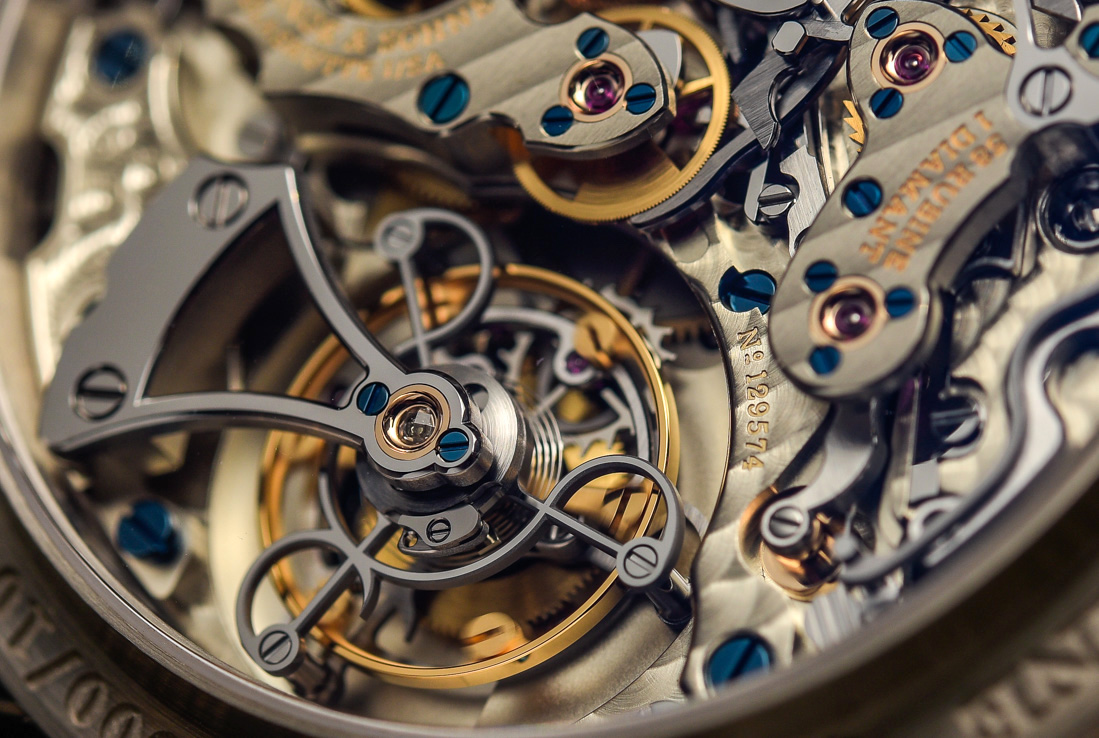 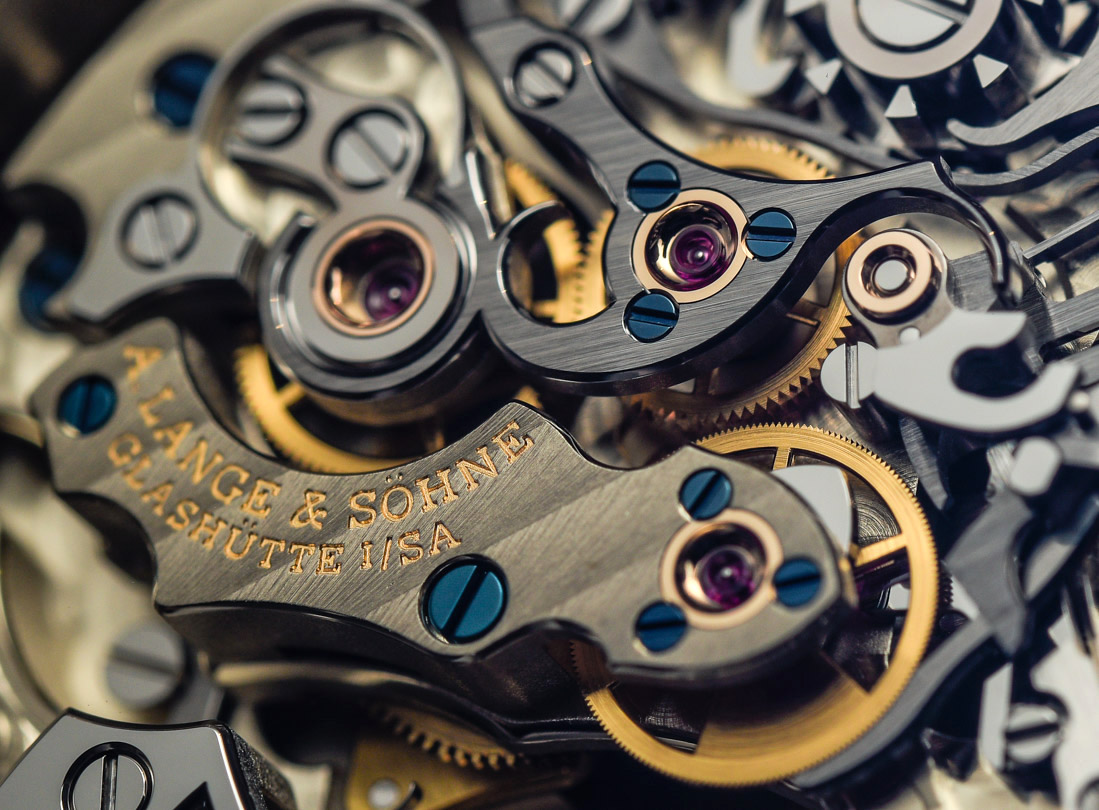 Finally, the chronograph is column-wheel controlled and also has a flyback mechanism. The L952.2 has a power reserve of around 50 hours, operating at 2.5Hz (18,000 bph). This is the only area of improvement I’d like to see in future A. Lange & Söhne tourbillon mechanisms. The brand’s average movement frequency is typically lower than the 4Hz that we normally see in mechanical watch movements. This has implication for accuracy over time. Even though the tourbillon is meant to average out some of the rate loss all regulation systems get, this really only works when the watch is in specific static positions. I’m not saying that the Datograph Perpetual Tourbillon isn’t an accurate watch, but it doesn’t seem to have features particularly designed for chronometery. Nonetheless, I vastly trust the accuracy of a complicated A. Lange & Söhne movement above those of many other competitor brands that might have similarly complicated offerings. 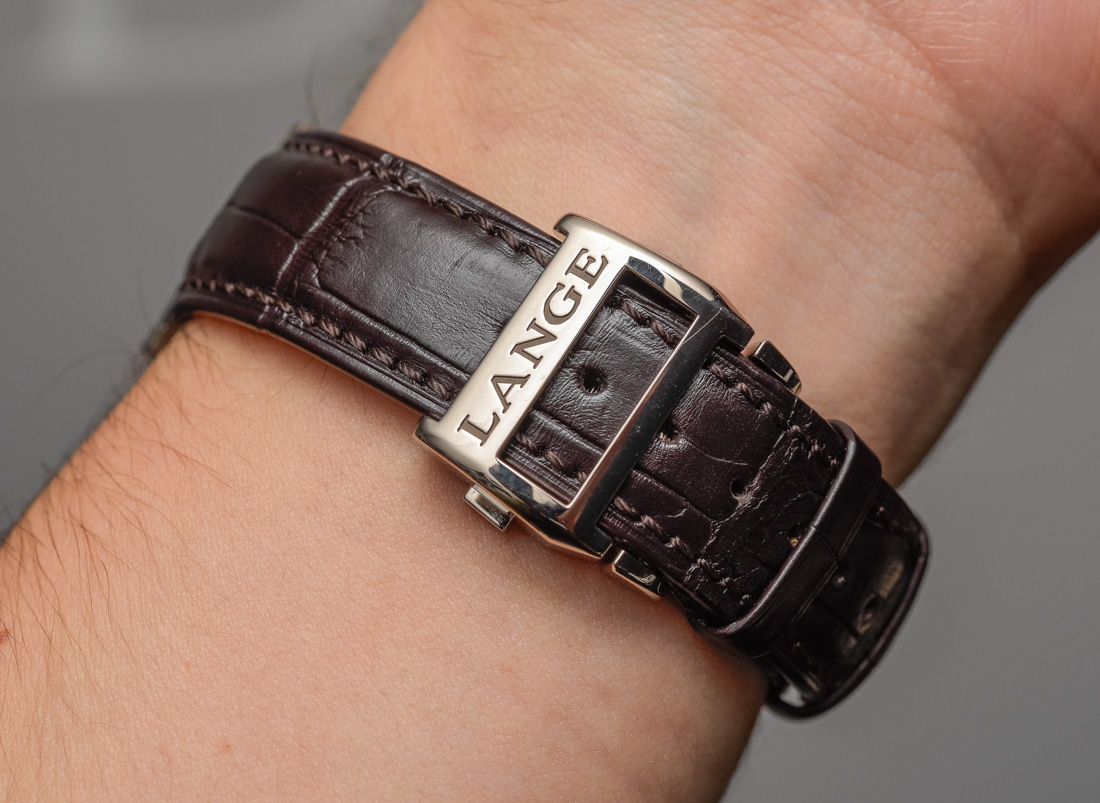 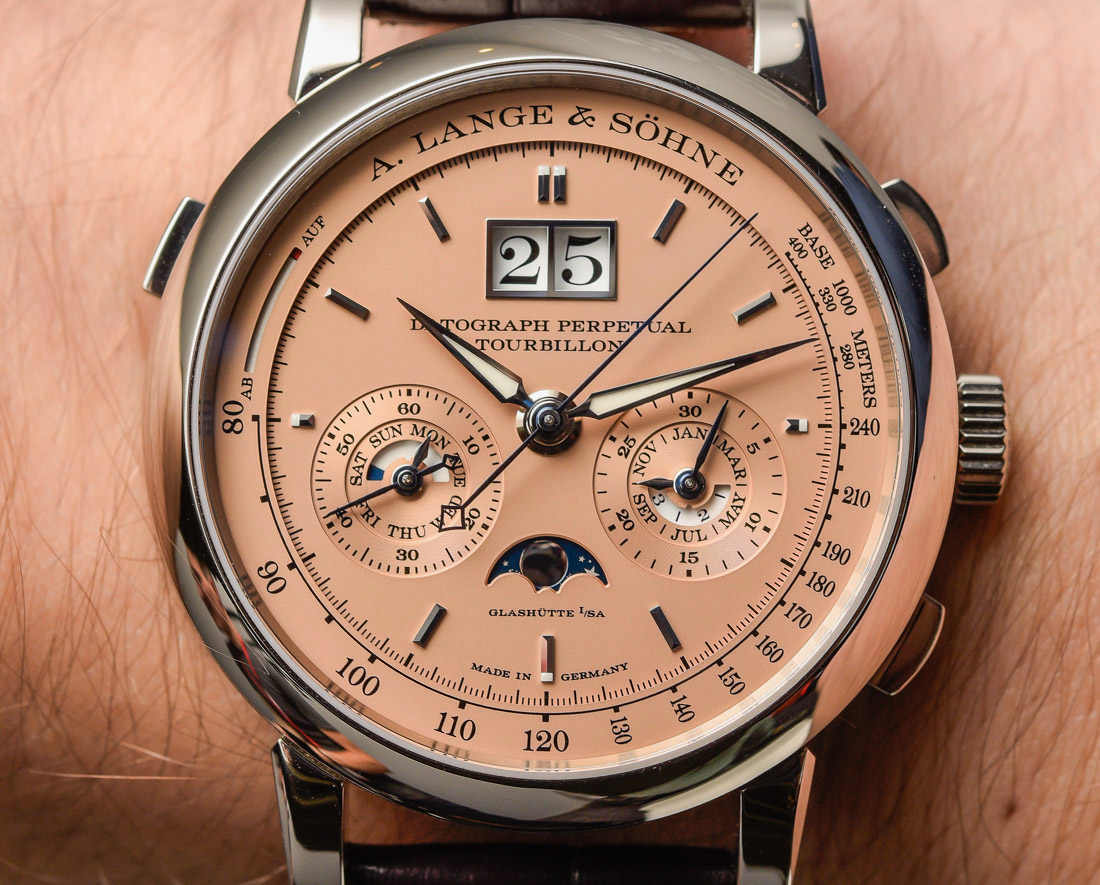 If your idea of a good day is to walk around with a roughly $300,000 watch on your wrist whose value will only be acclaimed and appreciated by those with a particular level of luxury education, then the A. Lange & Söhne Datograph Perpetual Tourbillon is an excellent choice. Pink-gold dials are also rare, and now you don’t have to wear a more generic blue, white, or black dial in order to enjoy an otherwise classic and highly refined timepiece. Always very impressive — I can’t wait to get my hands back on another complicated A. Lange & Söhne. Limited to 100 pieces, the Datograph Perpetual Tourbillon ref. 740.056 has a retail price of 285,000 Euros. Learn more at the A. Lange & Söhne website here.