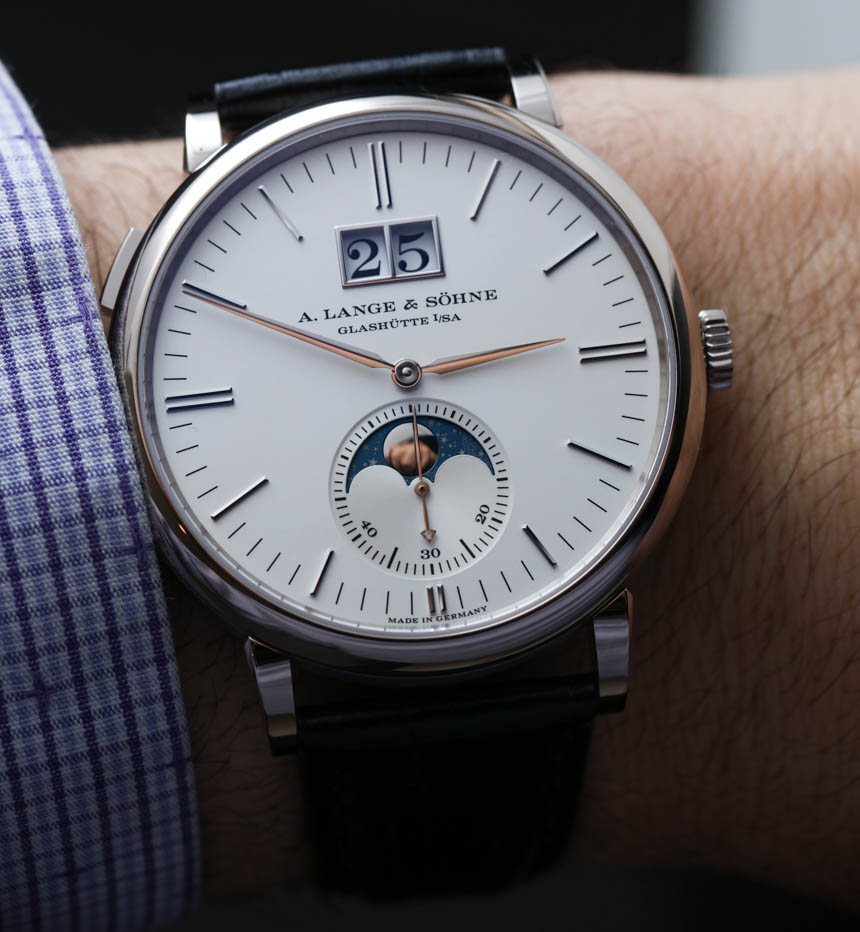 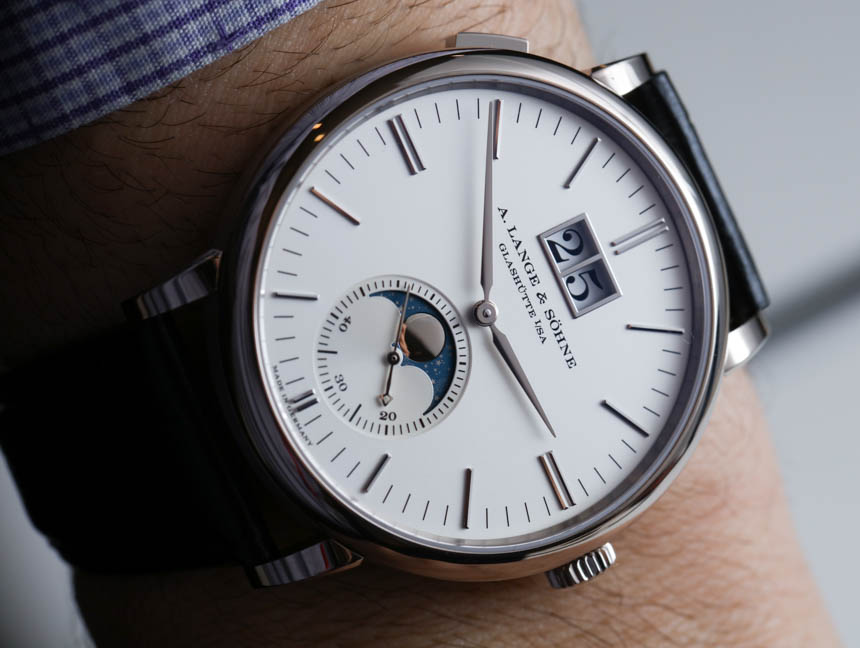 At SIHH 2016, German A. Lange & Söhne introduced a slew of impressive “flagship” watches such as the incredible Datograph Perpetual Tourbillon (hands-on here). We often think of A. Lange & Söhne as a company that produces “grail watches,” meant for only the most elite buyers. But, of course, the brand has a few models that are a bit more down to earth such as the easy-to-love Saxonia Moon Phase (introduced here with more information). “Down to earth,” relatively speaking, that is, and for Lange I think that means anything under about $45,000 in price. 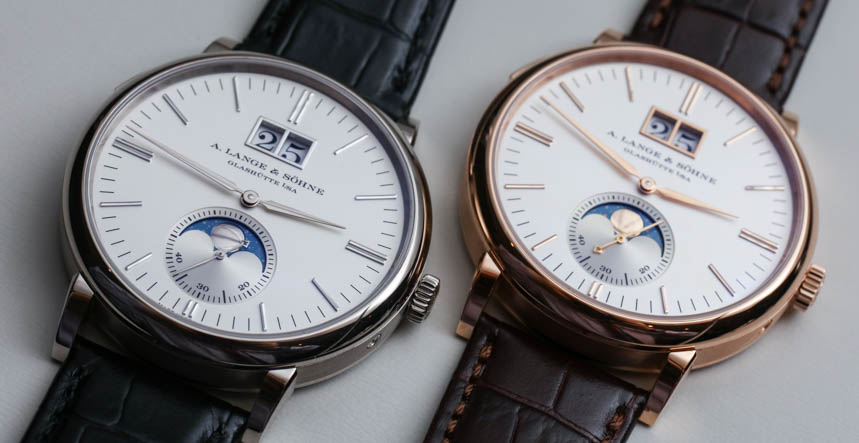 While speaking to A. Lange & Söhne’s CEO Wilhelm Schmid last year (video here), he reminded us that each Lange watch – no matter the price – receives the same level of hand-finishing and decoration. What separates the mega-watches from the standard watches at Lange is merely the level of mechanical complexity. So with that said, let’s look at the 2016 A. Lange & Söhne Saxonia Moon Phase as a more “accessible” model that isn’t too simple, and that offers an excellent mixture of comfort, features, and daily appeal. 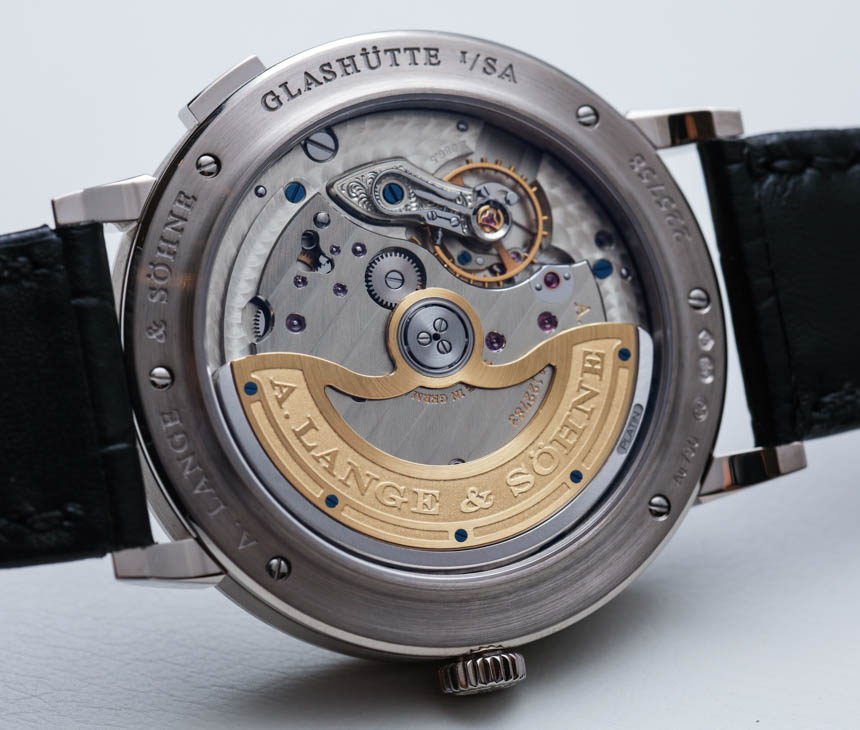 All A. Lange & Söhne Saxonia models begin with simple baton-style applied hour markers in contrast to, say, the 1815 collection’s use of Arabic numeral hour markers. This clean look on Saxonia models offers visual elegance as well as a healthy sense of utility that allows space for extra elements on the dial. While the Saxonia Thin, with its time-only dial, might appear sparse to some, combining extra complications on the dial with the standard Saxonia set of hour and minute markers makes for a good look with plenty of white space. 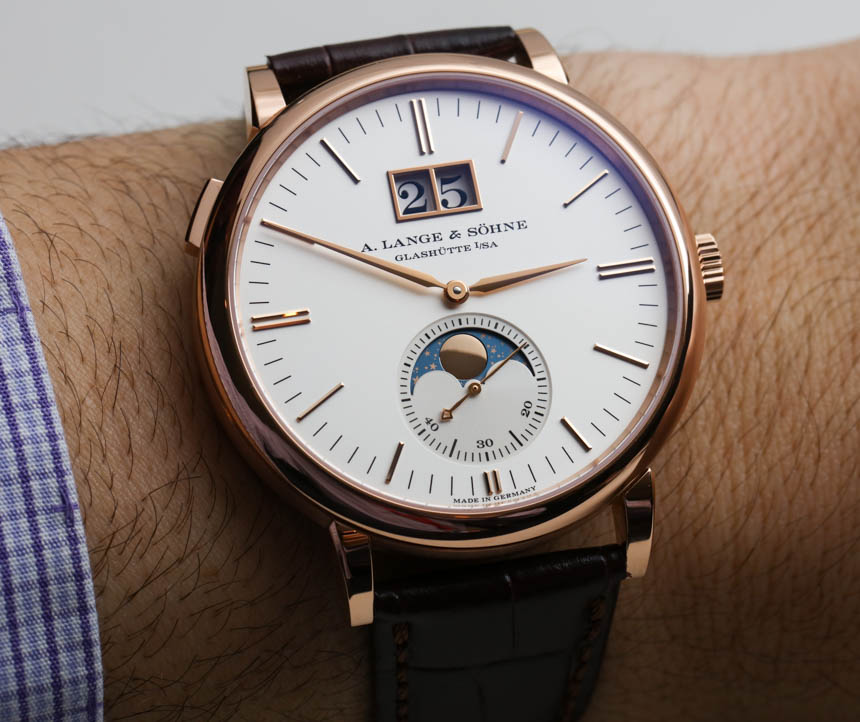 Also, compared to some other A. Lange & Söhne models like the more complicated Lange 1 watches, the A. Lange & Söhne Saxonia Moon Phase has very little text on the dial – something that I appreciate. Note as well that the A. Lange & Söhne logo itself is perfectly linear (horizontally), whereas on some other models the logo text is arched. This might seem like a minor change, but it really changes the overall demeanor of the dial as the logo sits underneath the big date indicator window position.

At 40mm wide, the A. Lange & Söhne Saxonia Moon Phase case is only 9.8mm thick, and yet still contains an automatic movement. Automatic Lange watches were once rare, and while they still are uncommon, we are seeing more and more automatic movement-based Lange watches coming out each year. Having and automatic movement increases the convenience factor for many users, and that means more people will be able to enjoy the A. Lange & Söhne Saxonia Moon Phase in more situations as a lot of watch lovers aren’t nearly as interested in manually-wound movements. 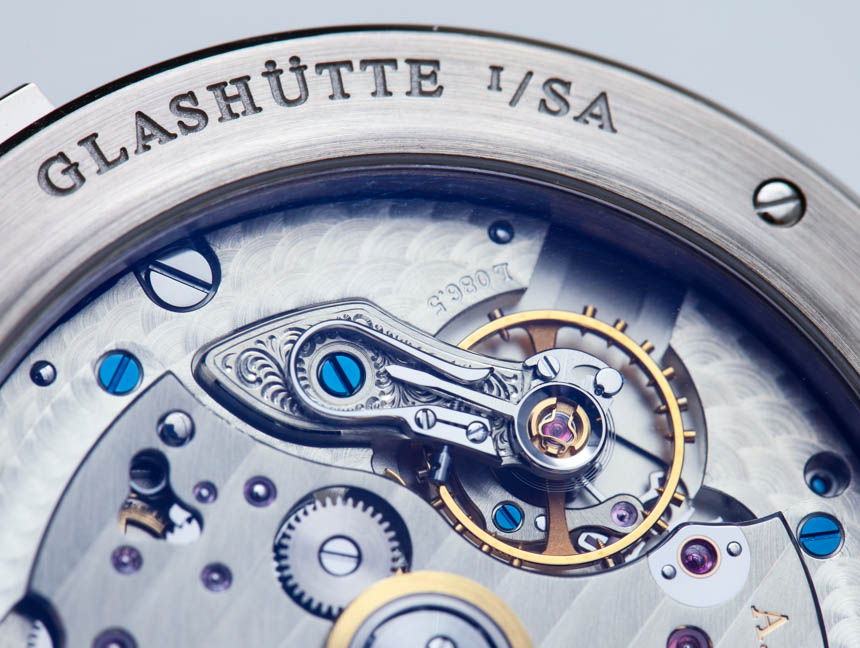 Other than the gold and blue color of the moon phase indicator, the A. Lange & Söhne Saxonia Moon Phase dial is otherwise monochromatic. Legibility is excellent thanks to proper use of textures and finishing for the face, hands, and markers, and the case is further beautifully polished in either 18k white or pink gold. In this situation, both the white and rose gold versions of the Saxonia Moon Phase are equally lovely and choosing one comes down merely to a matter of taste. The white gold one is arguably more stylistically versatile, but some people do really want to let others know they are wearing a gold watch (which is where white gold is a bit weaker, as from a distance it can easily be confused with steel). 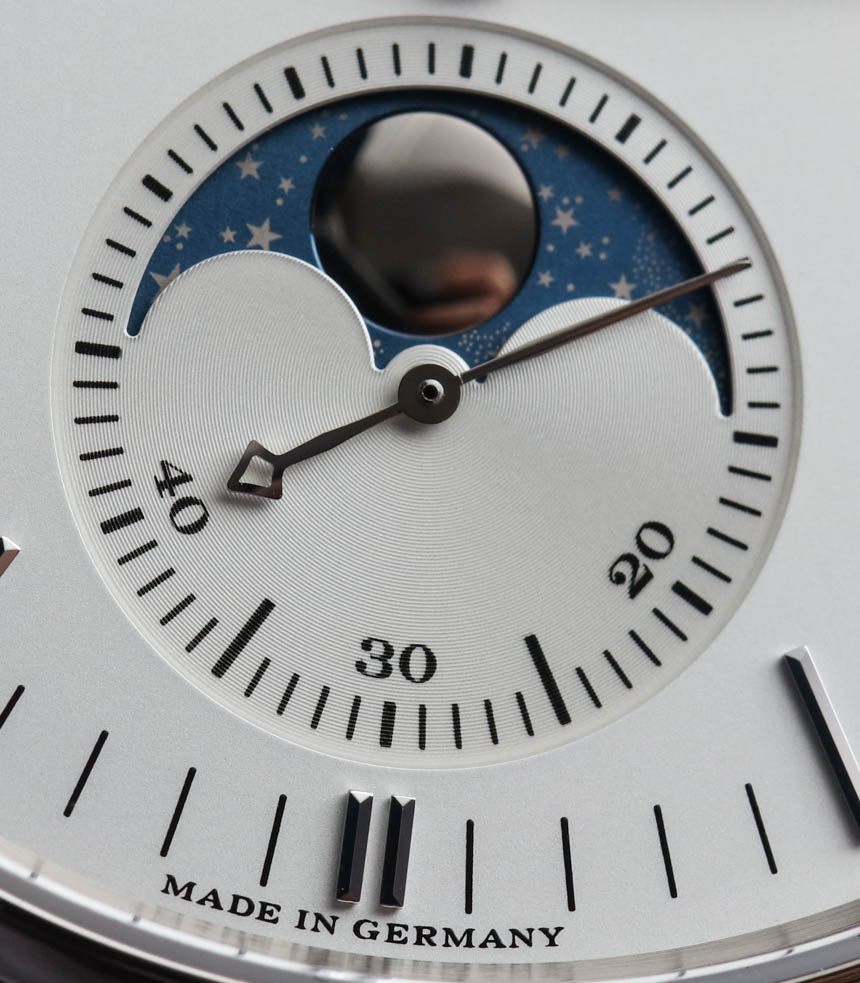 The 40mm-wide and relatively thin A. Lange & Söhne Saxonia Moon Phase case is a wonderfully democratic size that works for Eastern and Western sizing tastes, as well as for a variety of attire (even though the watch really wants to be matched to more formal clothing). Offering the time and date with automatic winding makes the watch useful, while the moon phase complication is more where the “emotional” element comes in. Luxury watches today need to combine function with emotion in a pleasing way so that we feel like we are wearing a “beautiful tool.” Here, like with most watches that have moon phase indicators, the astronomical complication is pretty to look at and helps the timepiece exist nicely within a larger heritage of horology. For these reasons, some people find moon phase indicators to be their favorite complication, while others struggle to find a utilitarian point for them. 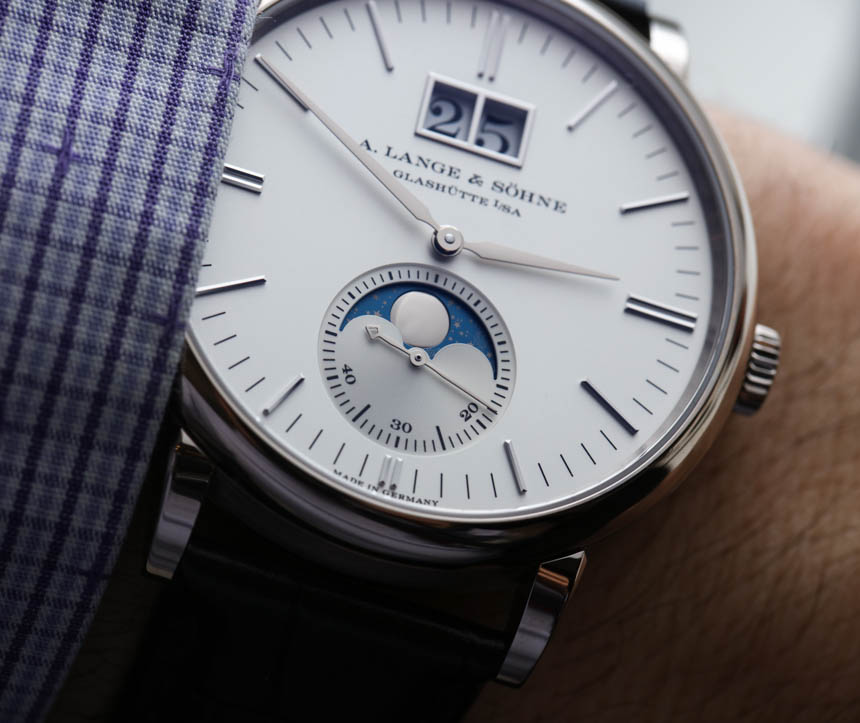 As always with A. Lange & Söhne watches, the detailing on the case, dial, and of course, movement is wonderful on the A. Lange & Söhne Saxonia Moon Phase. Let’s look at the movement a bit to find what you might consider a Lange-level workhorse. The in-house-made caliber L086.5 operates at 3Hz with a power reserve of three days. Using a solid gold and wonderfully designed automatic rotor, the L086.5 movement is produced from a total of 325 parts using mostly German silver. Don’t miss the hand-engraved balance cock, too. 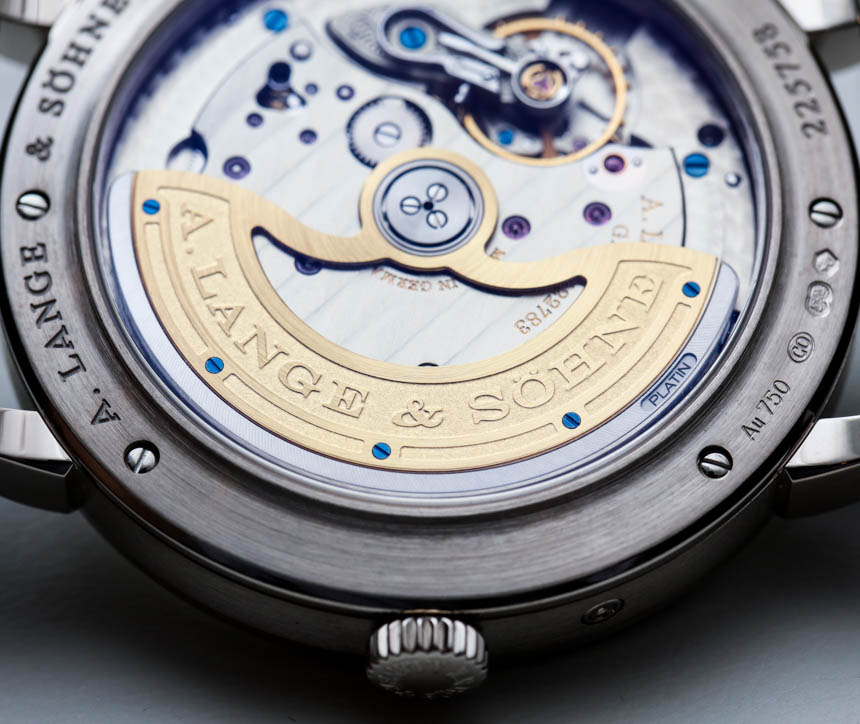 The movement uses a case pusher at 10 o’clock to adjust the big date indicator and a smaller inset pusher near 4 o’clock to adjust the moon phase. Clearly, being able to adjust the date is the priority between the two complications, and the addition of the extra squared pusher on the case adds just that much more character to the overall A. Lange & Söhne Saxonia Moon Phase watch design. 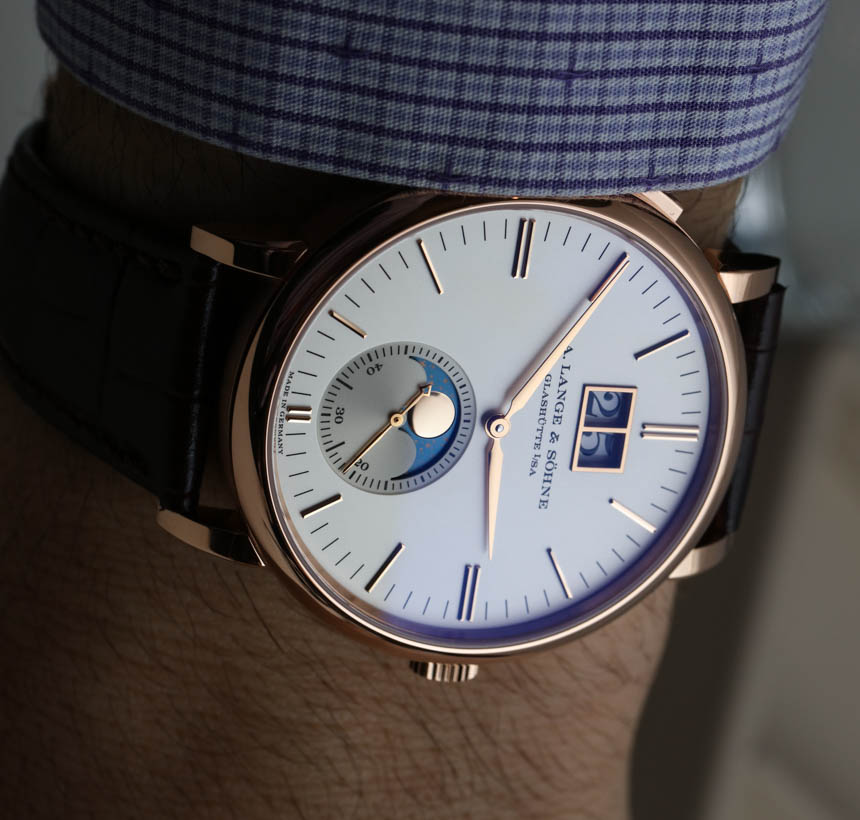 Combining the convenience of automatic winding with a functional, legible, symmetrical, and simple dial makes the A. Lange & Söhne Saxonia Moon Phase an incredibly well-tailored Lange watch for a range of tastes. On the wrist, it makes a case for itself, and luckily, it isn’t yet another marvelous A. Lange & Söhne watch with a six-figure price. For 2016, the brand will produce the A. Lange & Söhne Saxonia Moon Phase as either the reference 384.026 in 18k white gold or as the reference 384.032 in 18 pink gold. The price for either is €28,500. alange-soehne.com