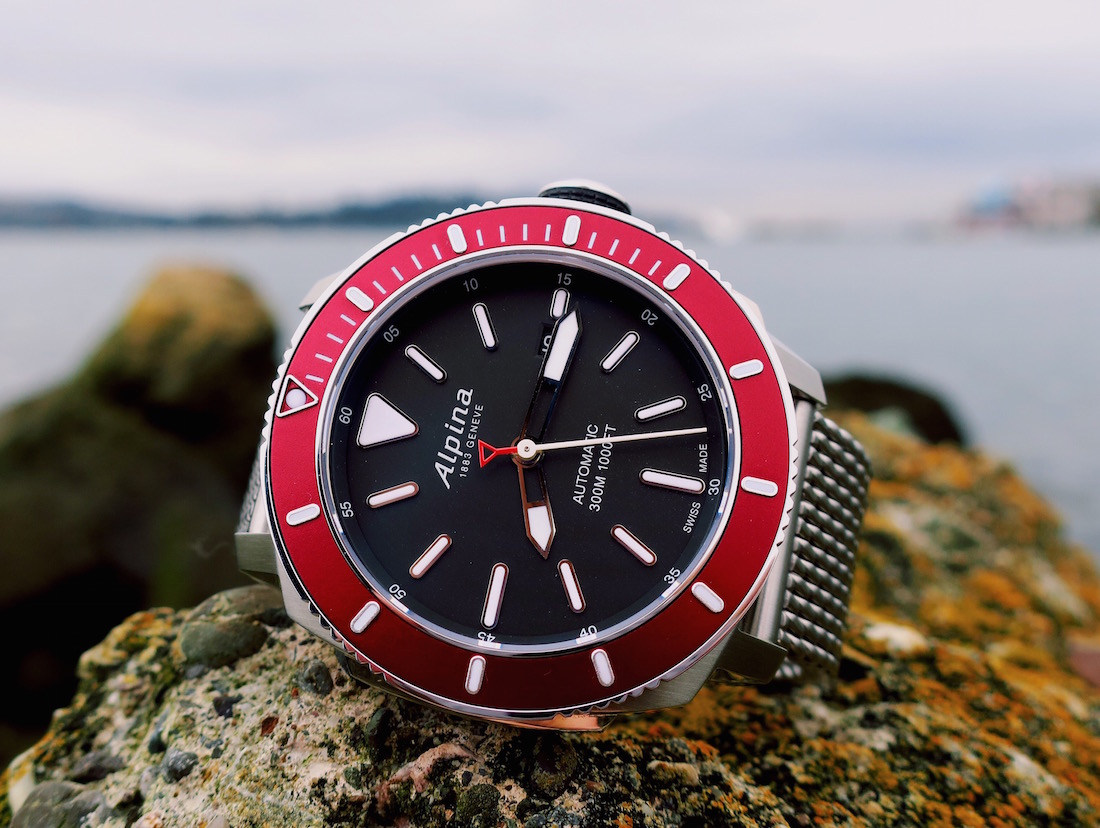 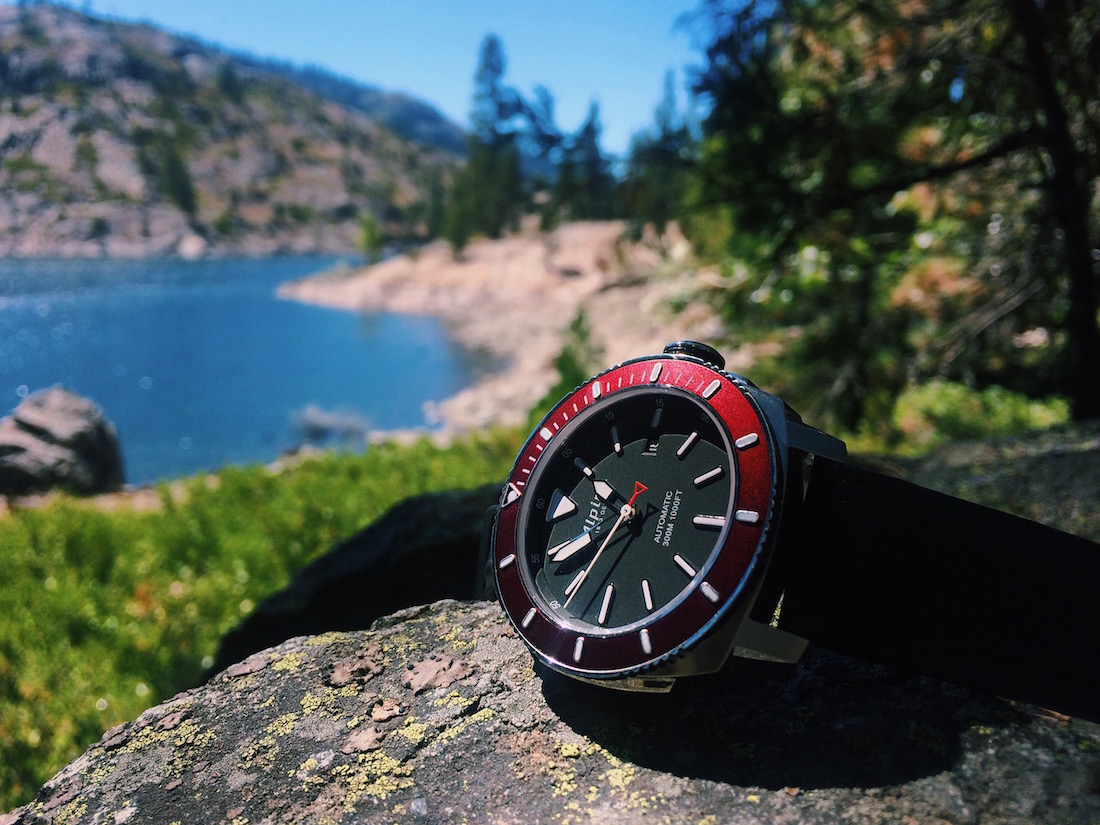 Then there’s the absence of a fully graduated minute track on the sloped chapter ring, which preserves the dial’s depth while further opening up the dial and gives the rounded baton indices plenty of room to shine. And shine they do – as the applied polished surrounds play with any available light, while the luminous centers glow reassuringly back in the dark. Granted, there’s not a ton of luminous paint on them – but a 1000-lumen blast from an LED flashlight was more than enough to keep the dial legible into the wee hours of the morning. Conversely, the omission of many of the dial’s superfluous details like a luminous second hand or a minute track triggers a distinct lack of precision, which may bother those who prefer their divers with more purposeful visual cues. 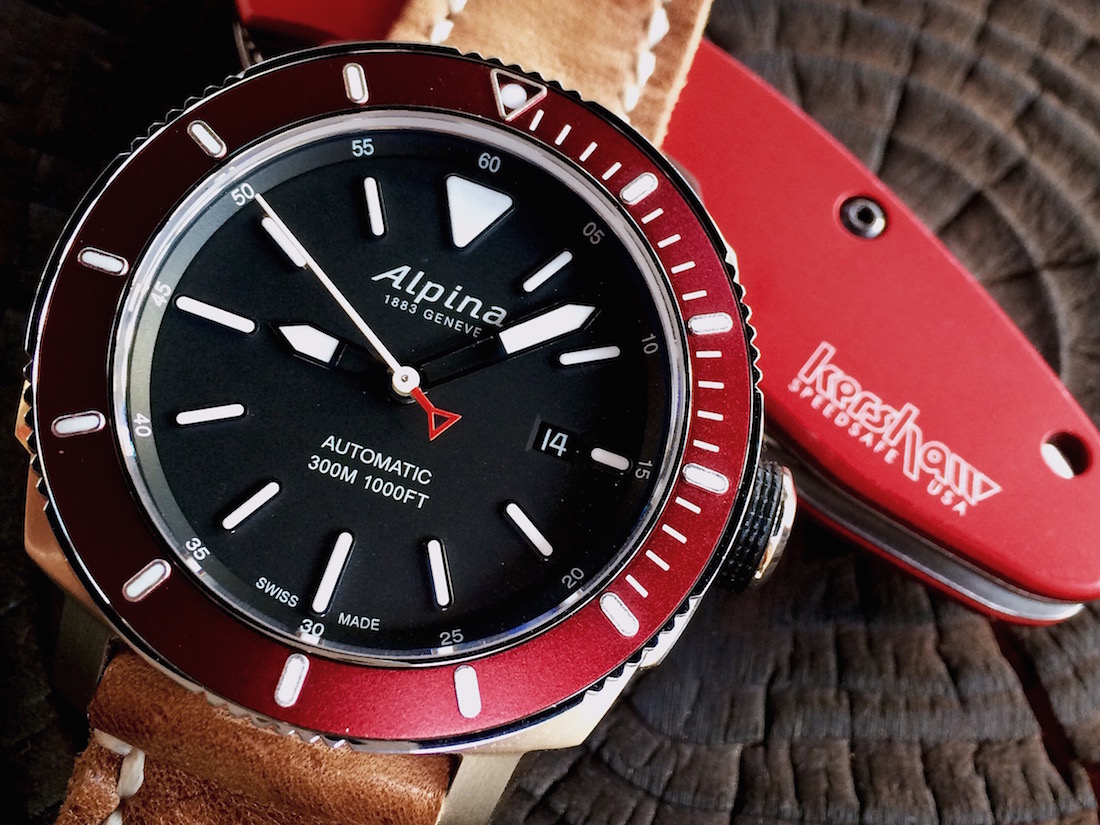 However, this isn’t an ISO-rated diver, nor does it aspire to be one – an attitude which I was surprised to find extremely refreshing on the wrist. Instead, Alpina lets its confidence-inspiring build quality do the talking, resulting in its own distinct aesthetic that felt just as at home in an alpine lake, as it did around the conference table in the marina. 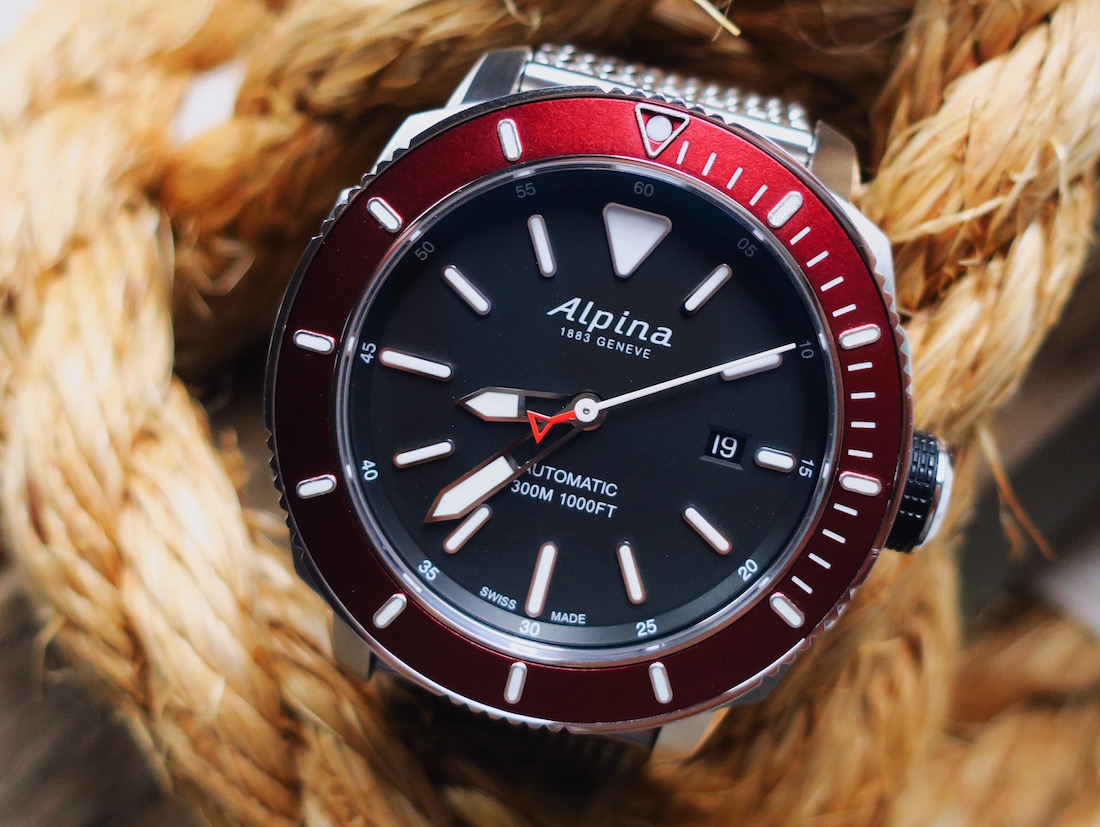 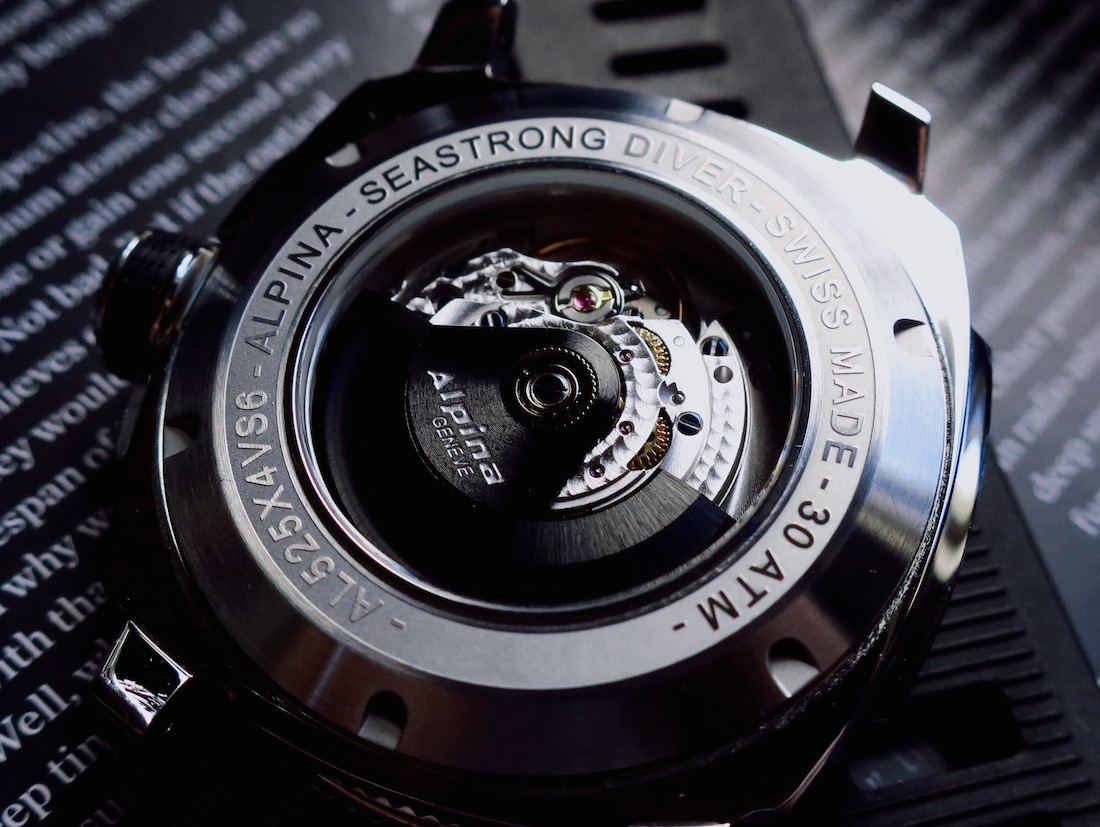 I generally prefer my divers to have solid casebacks (I was one of the few who liked Alpina’s scuba tank motif on the back of the quartz version of the Extreme Diver), especially when they’re powered by relatively basic movements – but the Alpina Seastrong Diver 300 Automatic doesn’t skimp with its Al-525 movement visible through an exhibition caseback. Essentially a top-grade Sellita SW-200, the Al-525 is very nicely equipped with incabloc shock protection, perlage-like Geneva stripes, blued screws, and is finished with a brushed black custom rotor – an Alpina signature on all the brand’s automatic watches. The movement itself winds smoothly, has kept impressive time, and is protected by an oversized screw-down crown that’s grippy, and easy to engage with the smoothly machined threads. 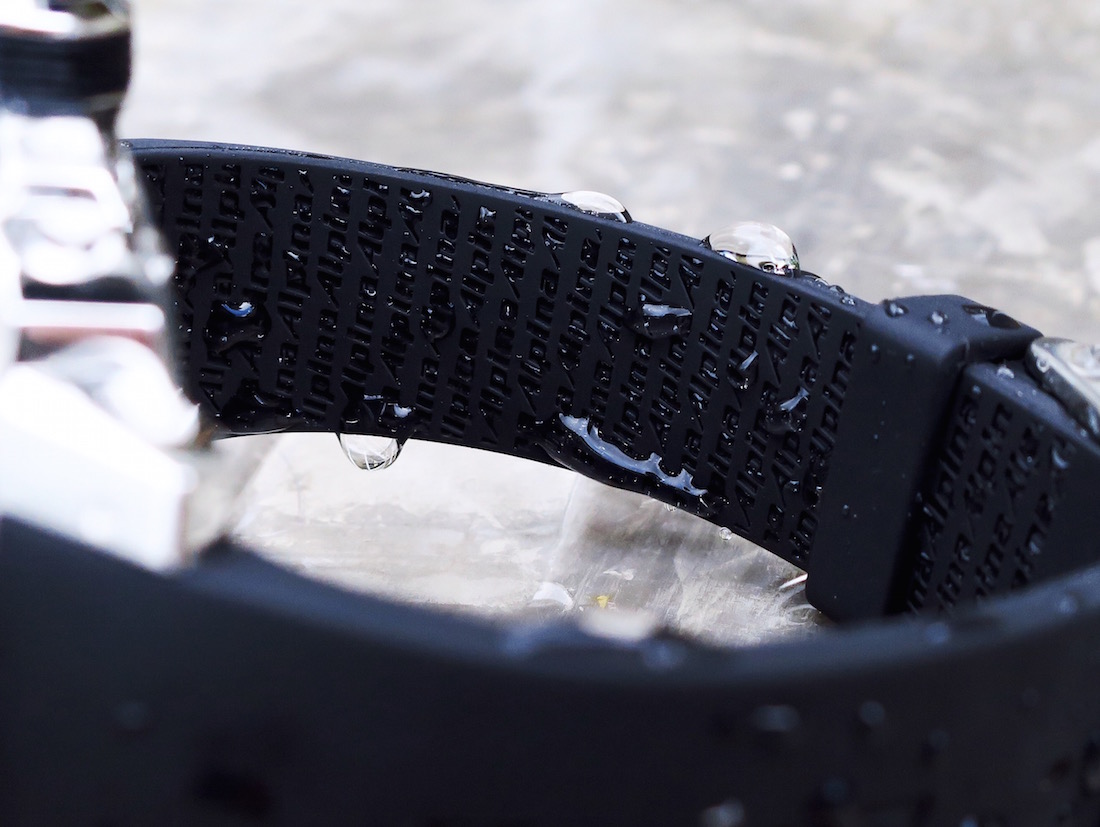 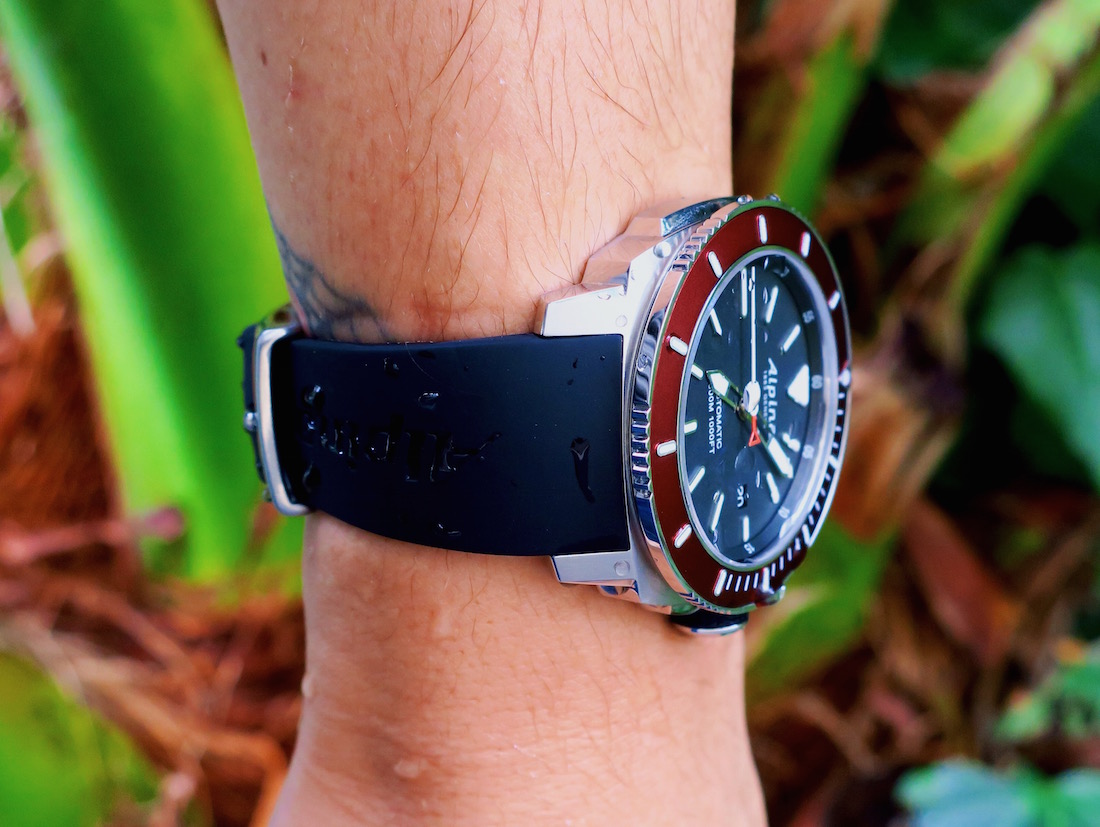 One of the more interesting design choices on the earliest iterations of the Alpina Seastrong Diver 300 was the rubberized nubuck leather strap, which added to the watch’s style quotient without betraying its proclivities for water. However, by the time the Seastrong made its way to market this fall, Alpina did away with the vintage-style strap, reverting to its embossed, integrated rubber strap. Granted, it’s not the most inspired design element of the entire package (especially considering it’s been recycled from the previous generation Seastrong), but it works well enough for the task at hand, and preserves the Seastrong’s intent as a capable dive watch. Bracelet fans take note – Alpina will be offering the Seastrong on a new bracelet starting next year, but if you can’t wait until then, take solace in the fact that the watch looks stellar on a wide variety of third-party straps, including my personal favorite: shark mesh. 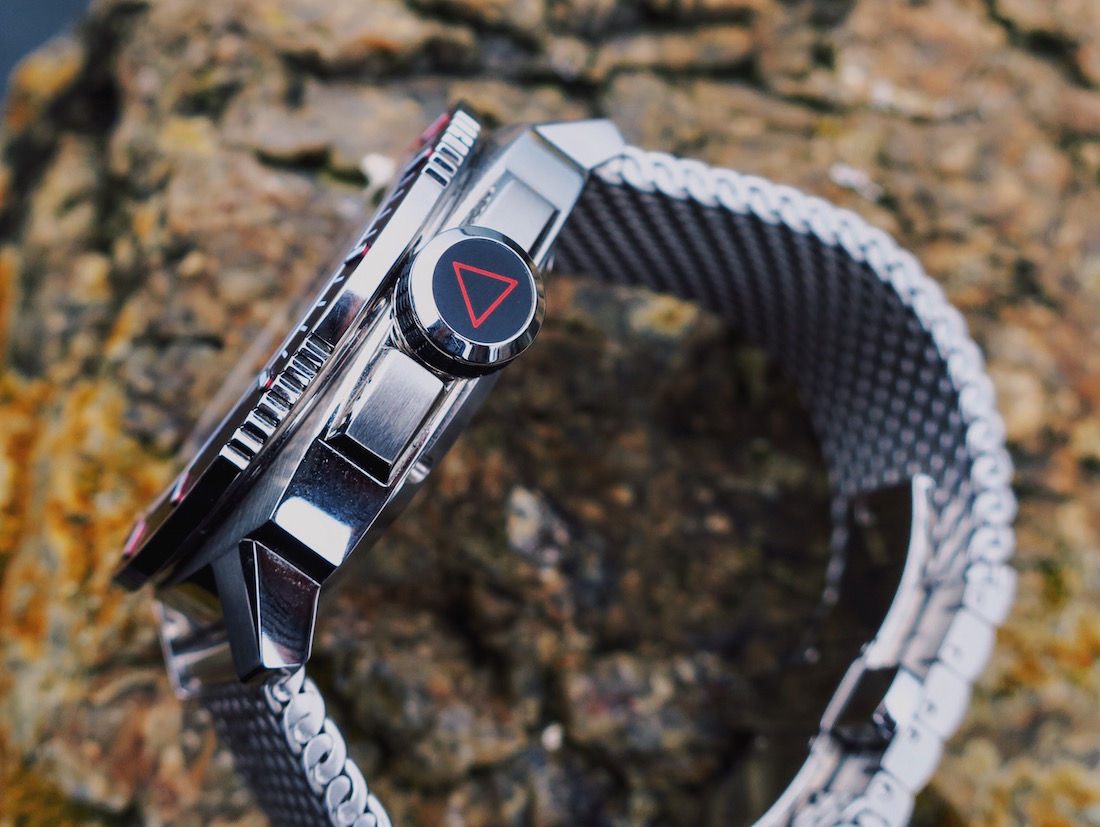 In a way, the Alpina Seastrong Diver 300 Automatic sort of feels a little bit like a class reunion, with the former wallflower now fully matured and returning to its old turf with a new confidence. It’s also proof that Alpina is really hitting its stride as a brand – stripping out the “me too” gimmicks and visual distractions that defined its past, and establishing a singular modern aesthetic that’s as classic as it is deservedly impossible to overlook, especially when considering the price of $1,395. alpina-watches.com