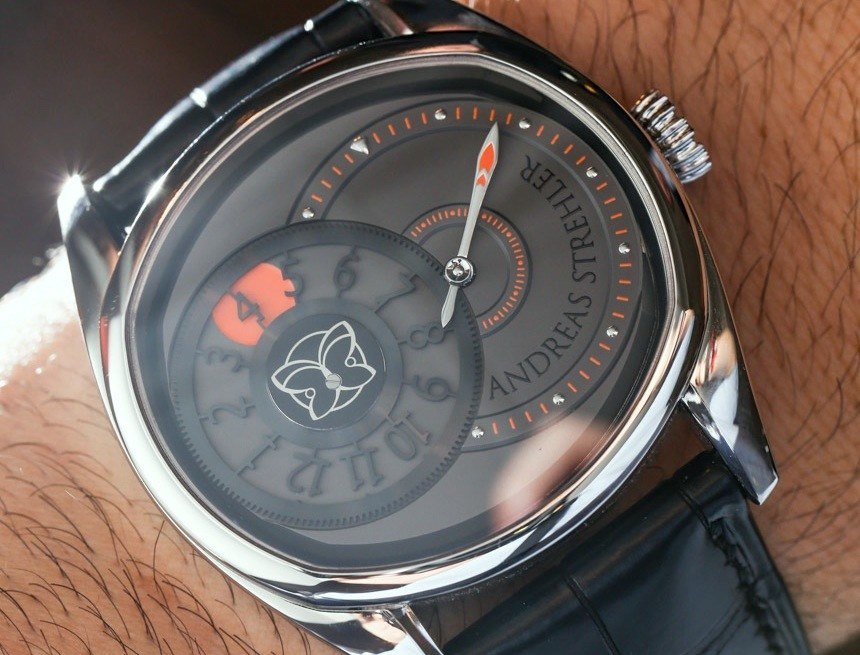 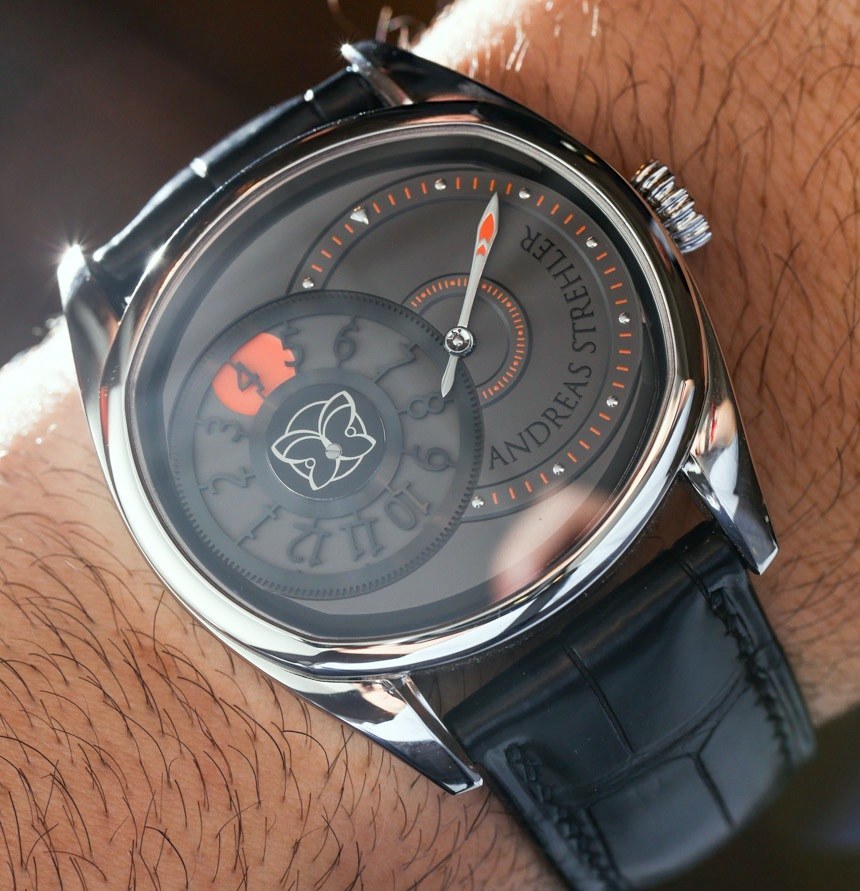 When you consider a watch from independent watchmaker Andreas Strehler, you first need to be OK with the fact that you’ll be wearing a men’s watch with a butterfly on it. As you can see, the papillon (“butterfly” in French) logo is a prominent part of Andreas Strehler’s designs often seen in the movement, but here, as a logo on the dial for the Andreas Strehler Time Shadow which is his new entry-level (relatively speaking, of course) watch. This is the first movement he has made without a butterfly design actually integrated into its architecture. Andreas Strehler has further done a pretty admirable job of “de-feminizing” the butterfly in the context of watchmaking to make it more comfortable as an adornment for men. With that said, I told Andreas I still thought it would be cool if some college-aged girl decided to get a tattoo of his logo on her lower back… 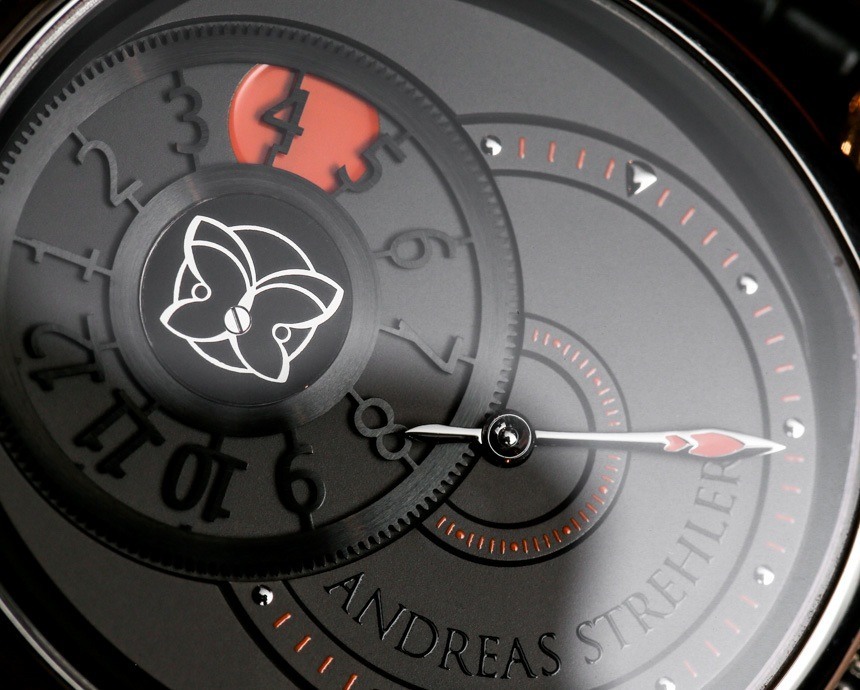 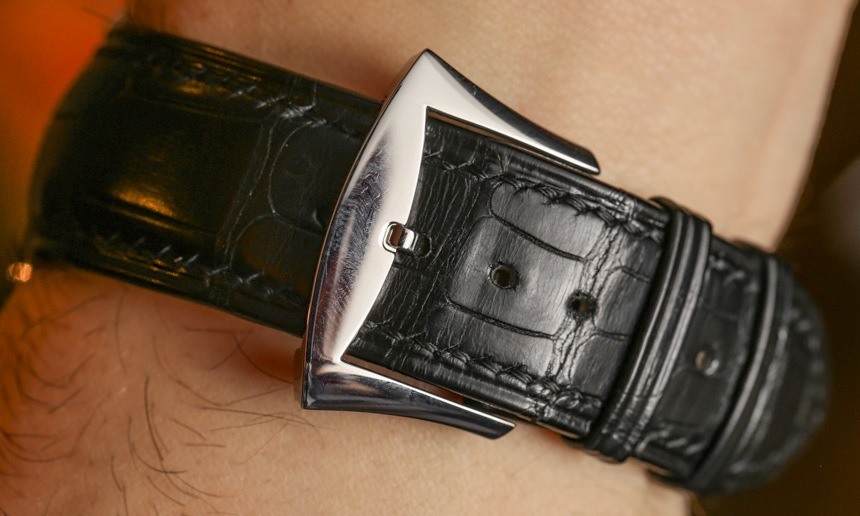 I met up with Andreas Strehler at SalonQP in London and checked out his newest steel-cased watch that he refers to as the Time Shadow with is dark dial. All these blacks are hell on watch photography as the colors literally absorb light. Aside from some small legibility issues, the timepiece looks really handsome in person – and certainly distinct from the crowd. At its core, you are getting a unique movement produced in-house by a well-respected watchmaker in an overall distinctive-looking package. 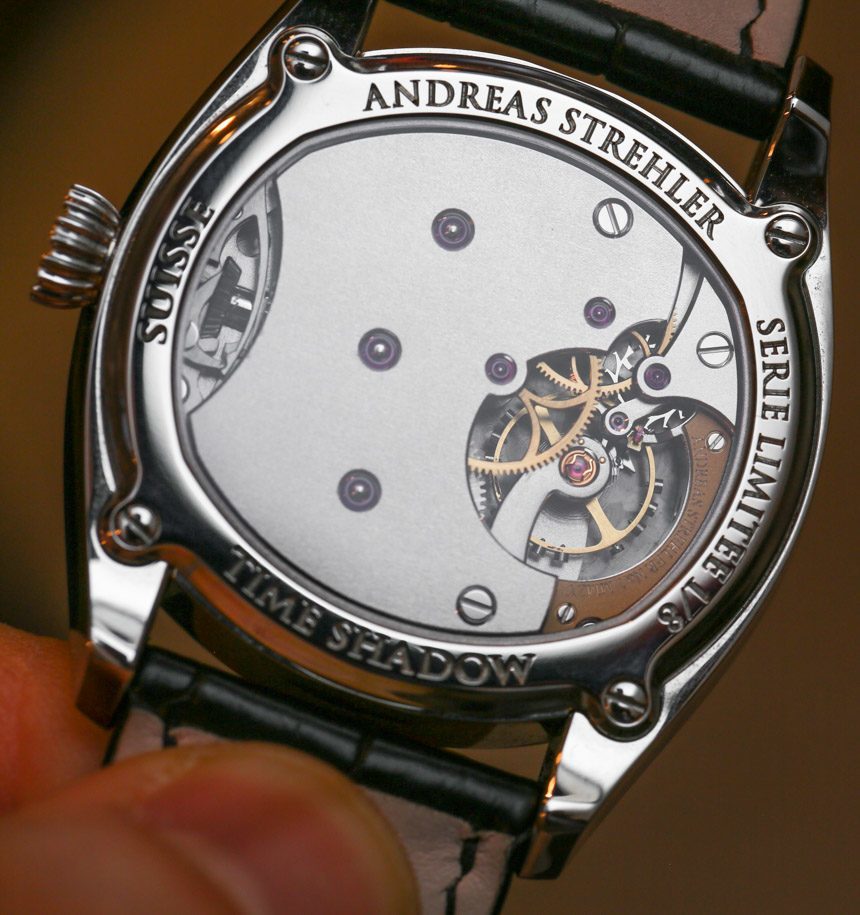 Functionally, the Andreas Strehler Time Shadow watch only indicates the time with hours and minutes – the former being on a disc to the left of the dial in a “semi-digital” manner, while the minutes use a more traditional off-centered dial to the right. There aren’t a lot of fancy tricks going on, just an easy-to-understand layout with the information most people want to view at a glance. Legibility is pretty good, but purists will probably not like the overlapping dials as well as the fact that the minute dial doesn’t have a complete ring of indicators. 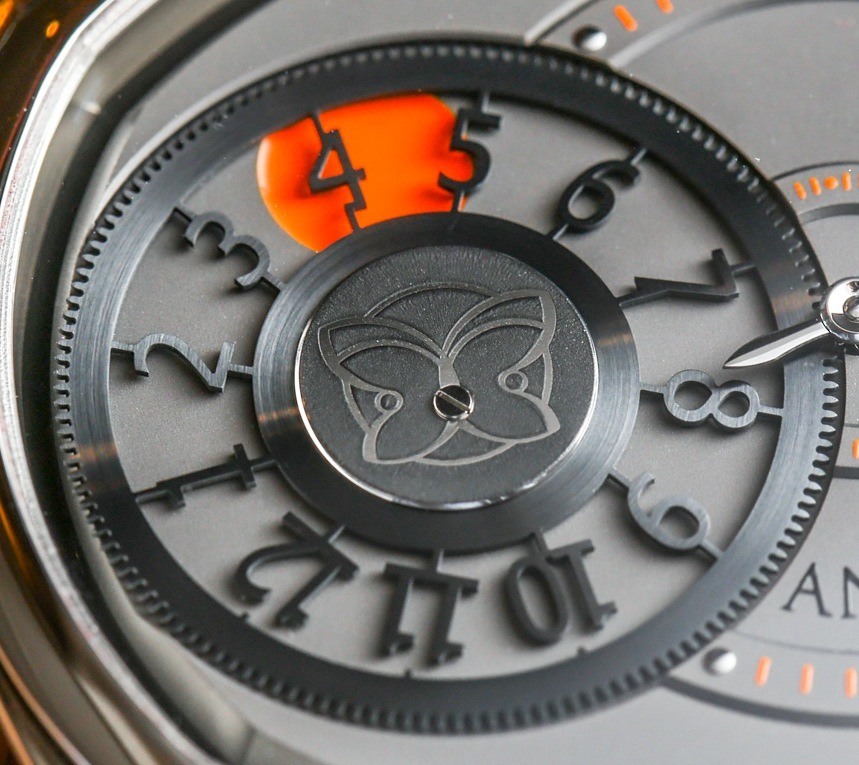 The orange area in the hour ring where the current hour is read is actually done with SuperLumiNova paint. This means that in the dark, the current hour should be silhouetted against the lumed area for a cool effect. Additional SuperLumiNova is also used for the minute hand. It is actually sort of uncommon for these more formal independent watches to use luminant, which is why I decided to dwell on this fact and point it out to you. Also, it is worth noting that the watch hands are produced in-house by Andreas Strehler. 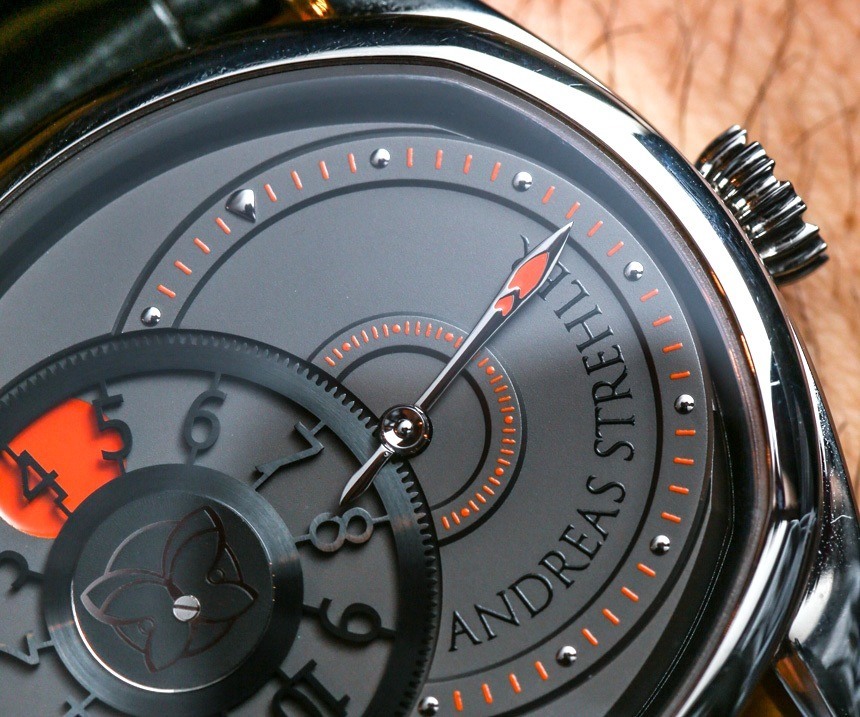 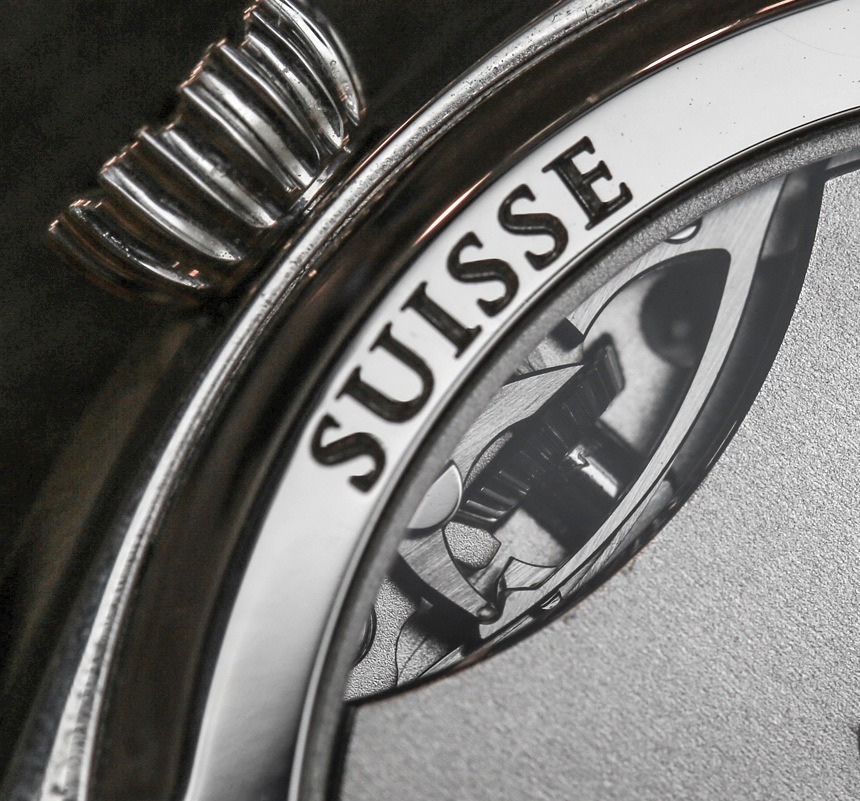 All the Andreas Strehler watches I know come in the brand’s original-looking case design which is a combination of a cushion and TV screen shape. Size is quite modest given the shape, and I recommend it for those who commonly wear sleeves. The case (here in steel) is 41mm wide and 37.3mm tall. It is rather thin as well, and could easily work as a dress watch or something a bit more formal depending on your attire and personal style. I should note that the Andreas Strehler cases are very comfortable while being worn. Moreover – and this is something which is very important for independent watchmakers – you get the sense that there is a lot of original design DNA here so you won’t confuse an Andreas Strehler design with anyone else’s product. 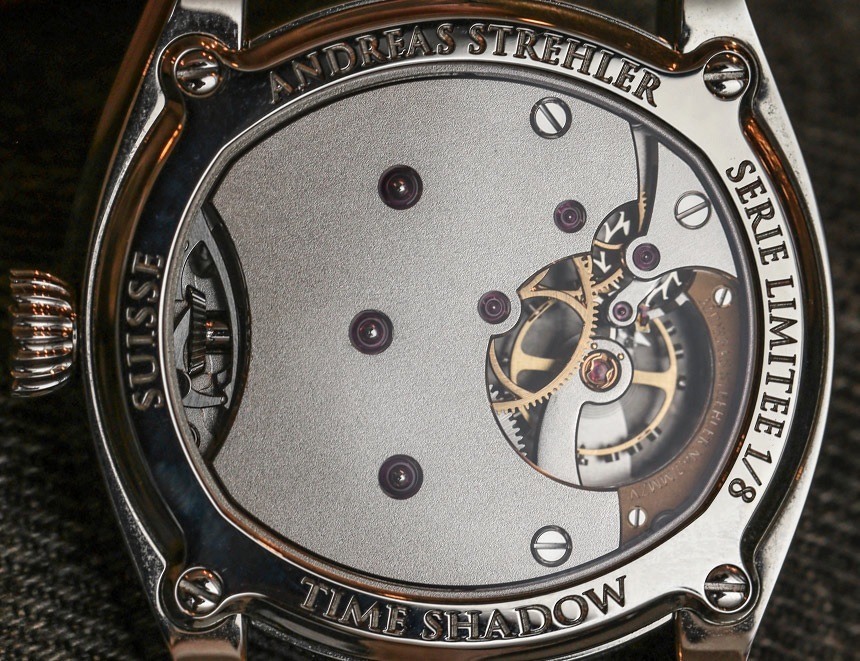 When you purchase this or any other low-production timepiece from an independent watchmaker, what you are really spending money on is the movement. More specifically, the time that went into the movement. It is like buying a painting. Your value assessment is a combination of time spent on the composition and the skill/talent displayed therein. 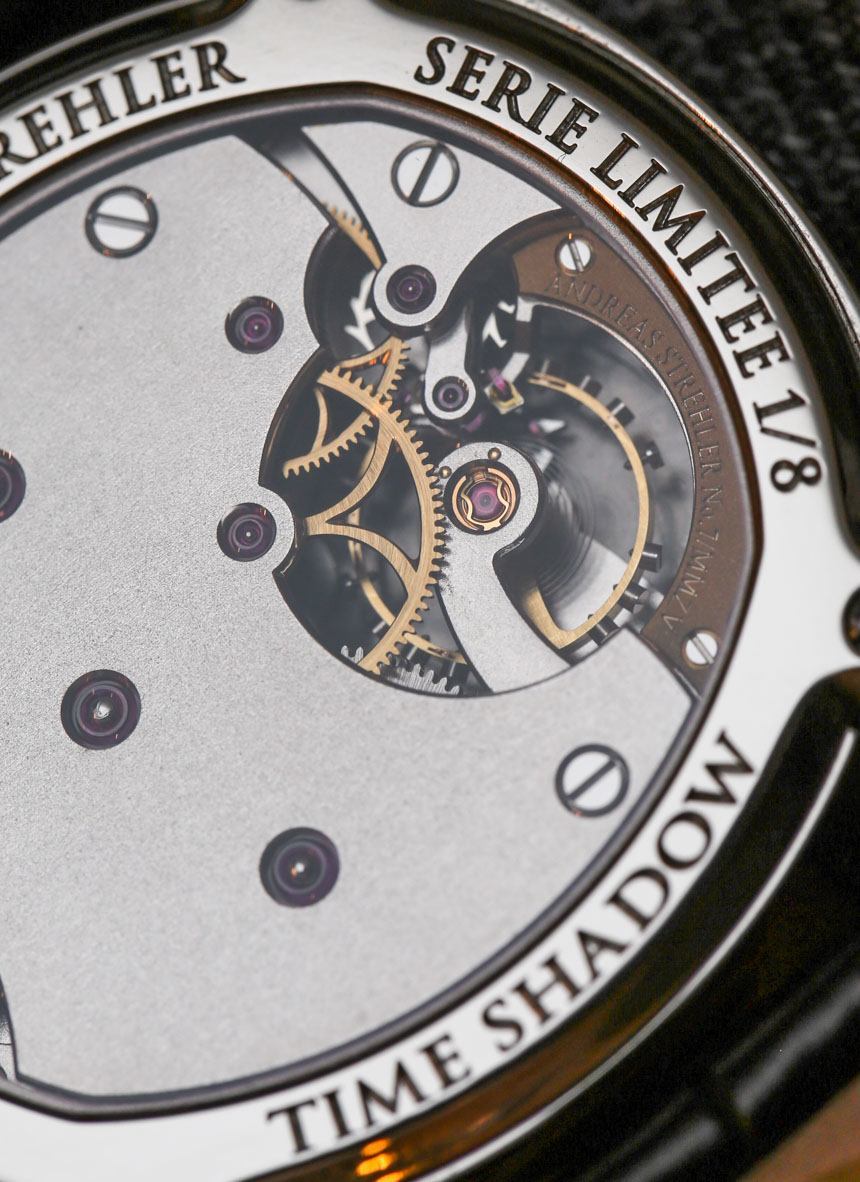 Inside the Andreas Strehler Time Shadow is the new Andreas Strehler caliber “Time Shadow,” produced from 132 parts operating at 3Hz (21,600 bph) with a power reserve of 72 hours (three days) between two mainspring barrels. Movement finishing uses a lot of satinized matte surfaces but also a lot of hand-beveling. It is a simple, albeit very beautiful and well-conceived Swiss movement that is sure to get approval by picky horological enthusiasts. 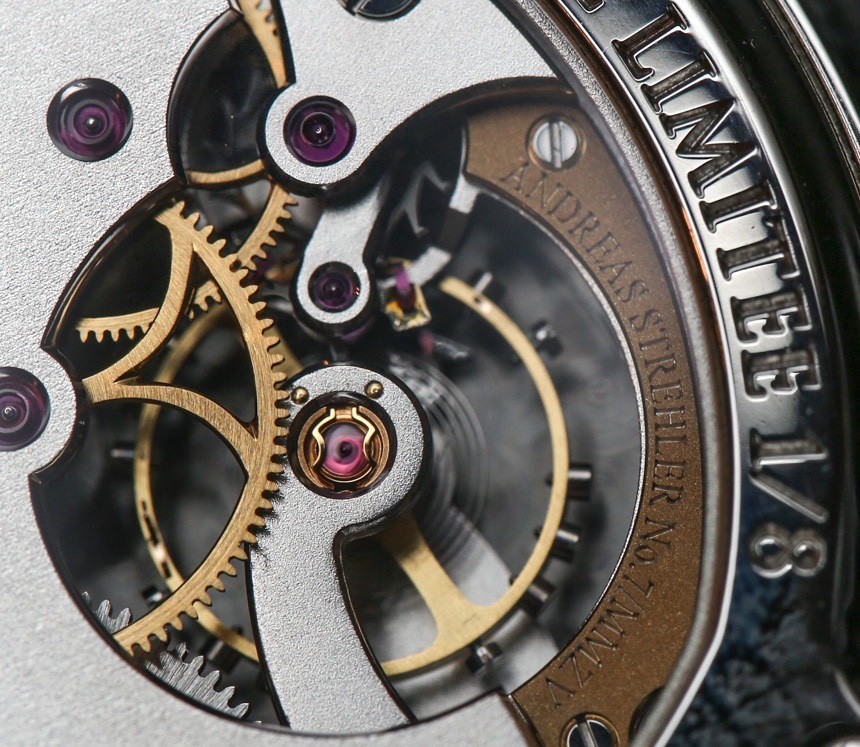 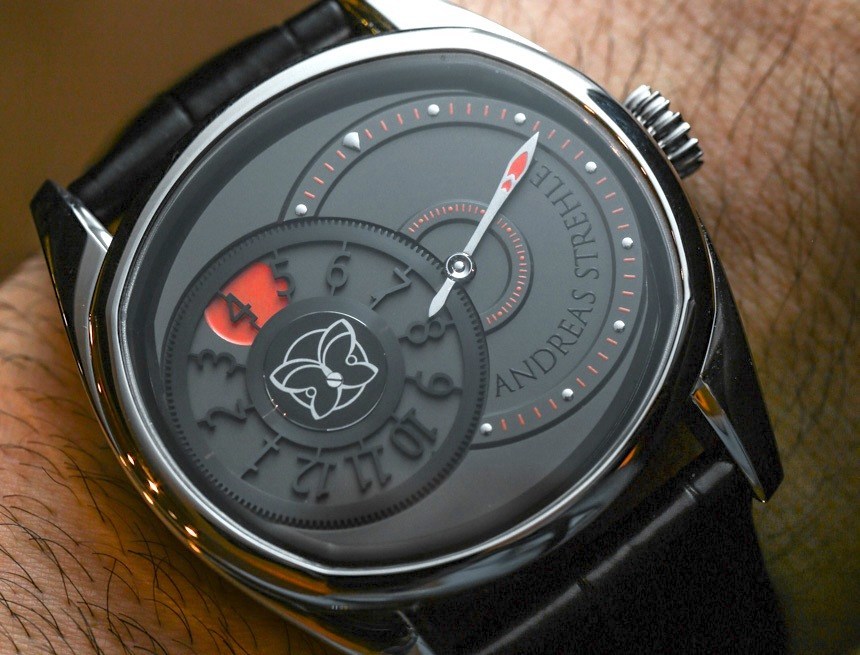