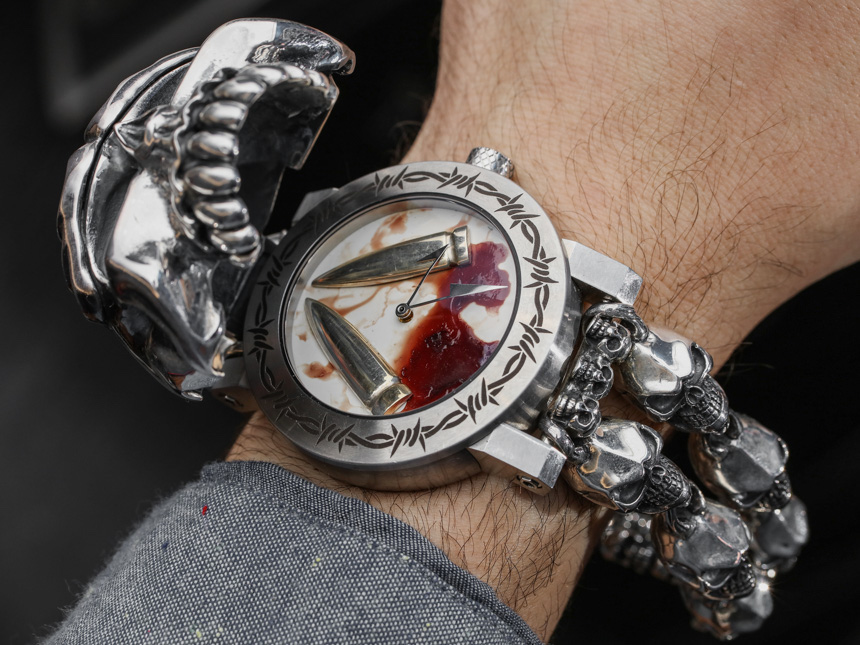 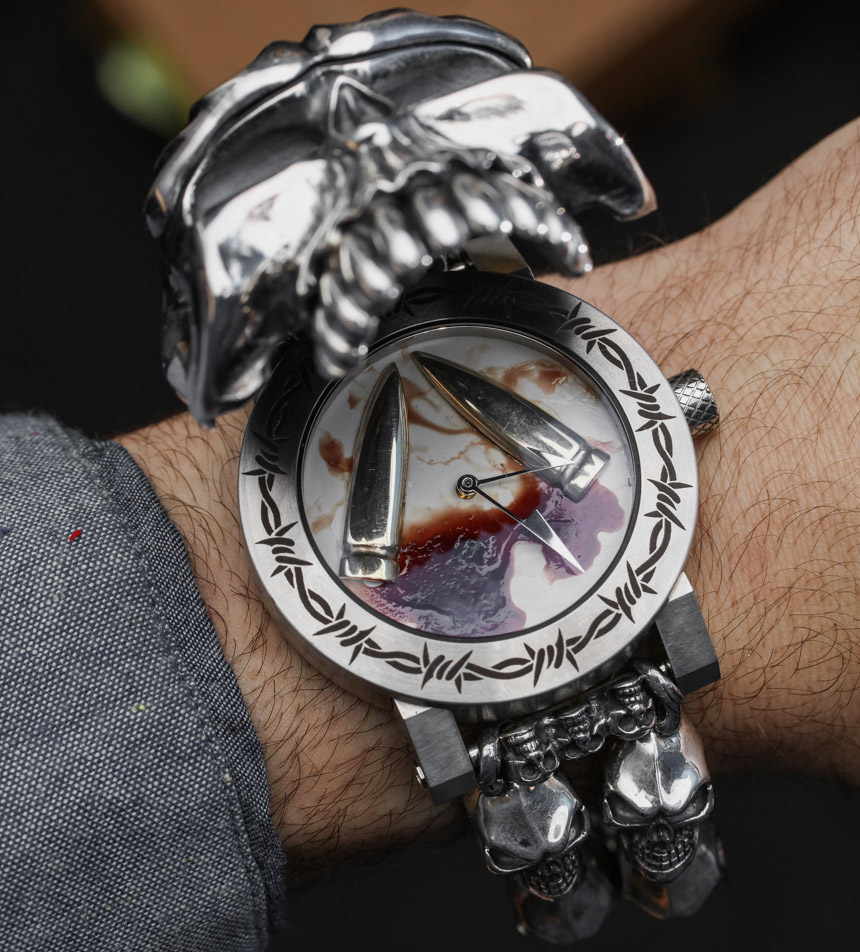 Yvan Arpa is a watch industry soldier. In the almost 10 years I’ve known him, the projects and brands that he has worked with vary almost as much as the often crazy designs his own ArtyA brand is known for presenting. Despite being based in Geneva and connected to the traditional watch industry, Yvan Arpa has the charming ability to feel like a real alternative to the rank and file watchmaker and design we typically come across.  His artisitc work and company strategy, and in some ways, his agility as a business man and artist has allowed him to persist relatively well in a once proud industry now marked by uncertainly, instability, and crippling rigidity. Arpa exists within the watch industry as much as he exists outside of it, viewing it from the side – despite the fact that as a Geneva resident he is quite literally situated in the heart of the where Swiss luxury timepieces are made. Inside all of the watches are Swiss mechanical movements – many of which are modified in-house by ArtyA. 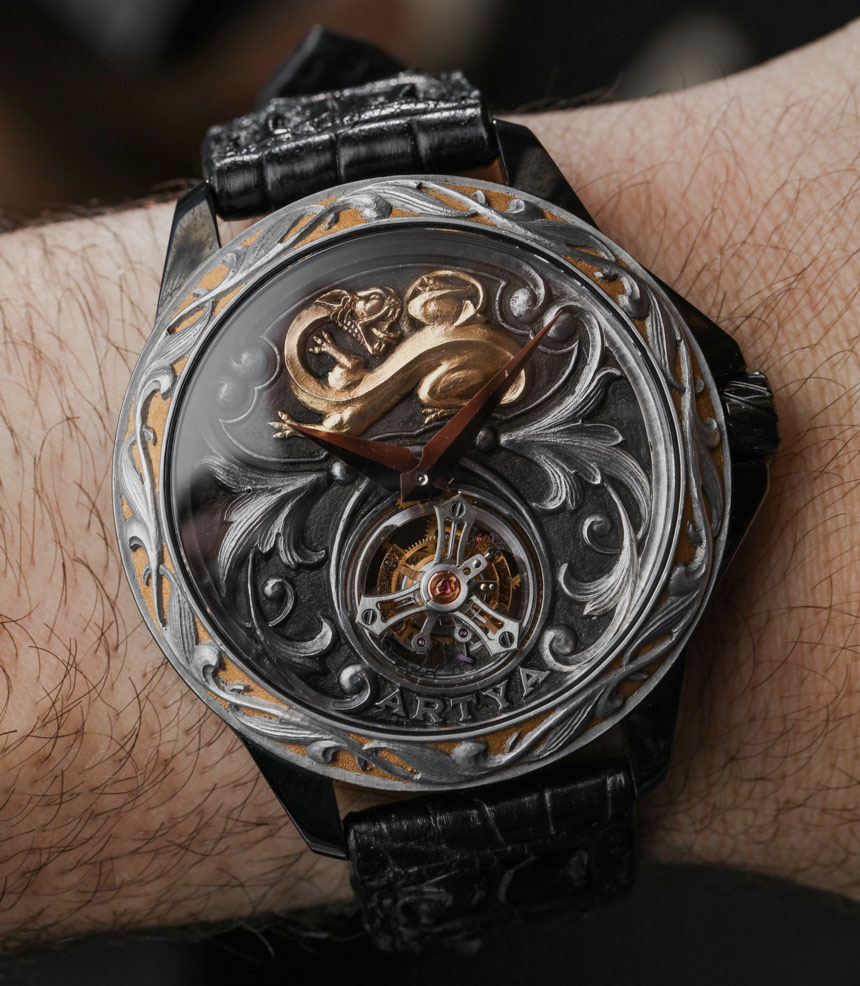 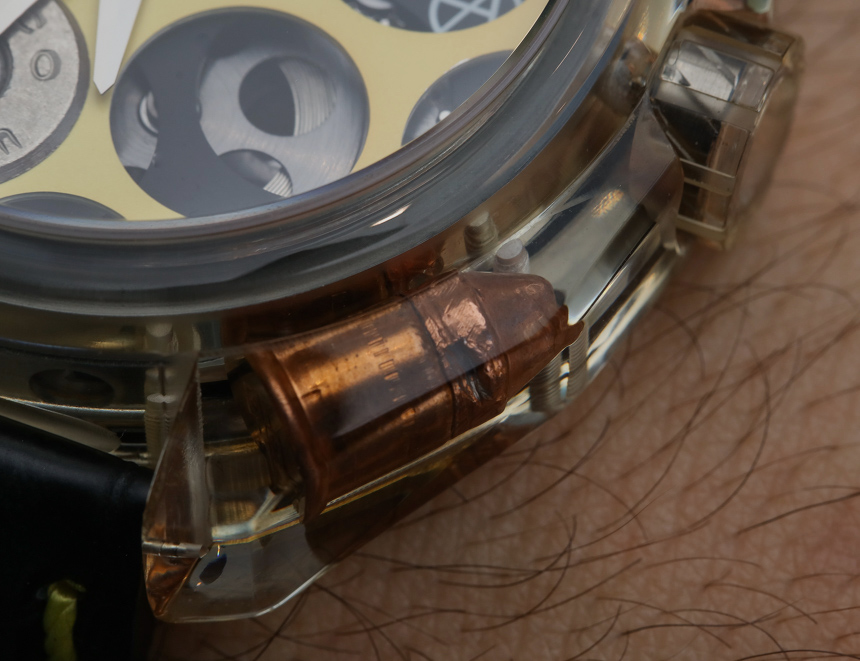 In 2017 Yvan’s biggest problem is a common one shared by other brands and that is – how to interface with more potential customers. ArtyA thrives on personal relationships and in these modern times the challenge for any watchmaker artist is always distribution and marketing. The Swiss “rock & roll” watch designer and artist is unique in his ability to meld classic design sensibility with aesthetics he himself sometimes giddily refers to as “crazy.” In an industry where shock value is as important as classicism, his polarizing designs are just what some clients want.

A note that I’ll run through some of the 2017 Artya releases here, but check out the massive gallery for a lot more images. 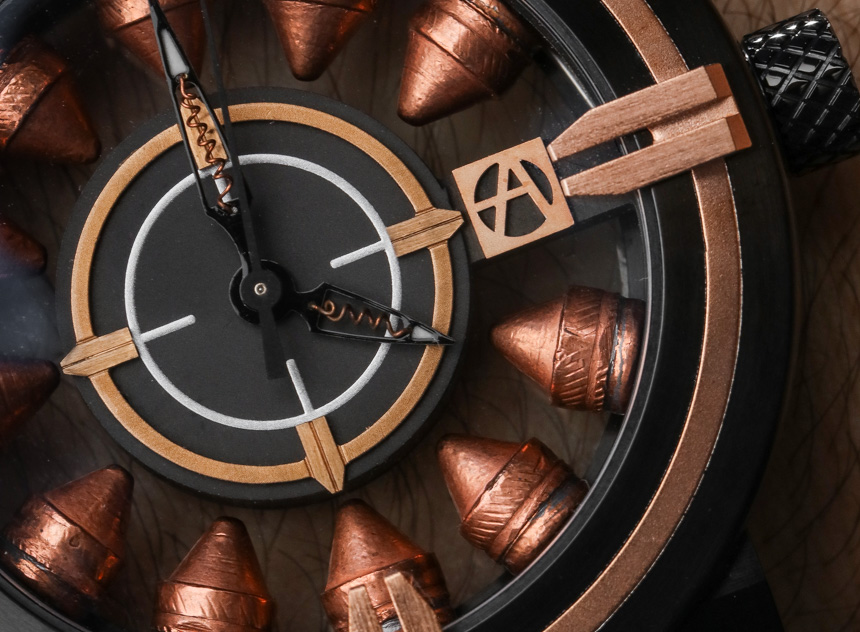 ArtyA watches start at about 3,400 CHF, and go up to astronomic tourbillon prices at over $500,000 USD. The brand once only made “piece unique” models (two of which are shown above), with the implication that each timepiece was totally original. Since then, Arpa’s brand has seemingly mixed small series productions with piece unique models. Timepieces will bullets, blood, butterflies, and skulls seem to be perpetually popular with his crowd. 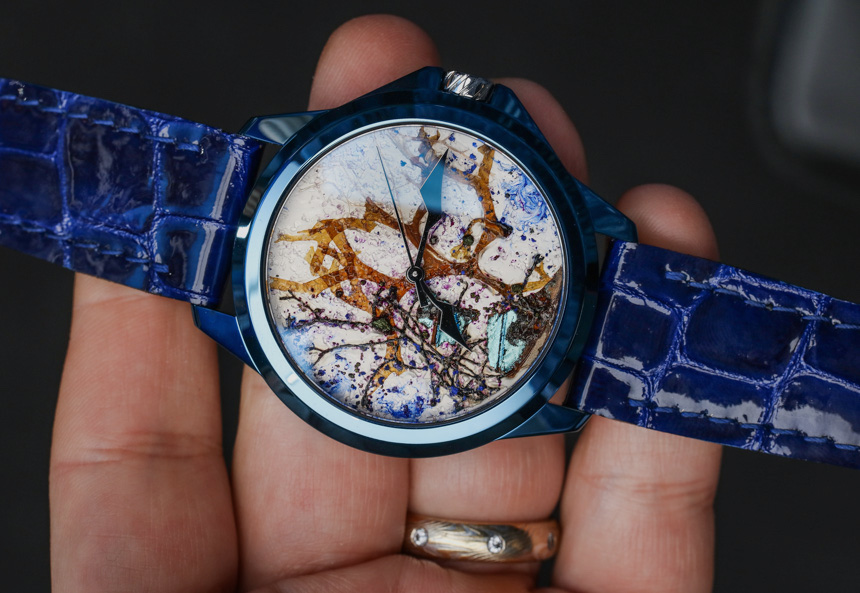 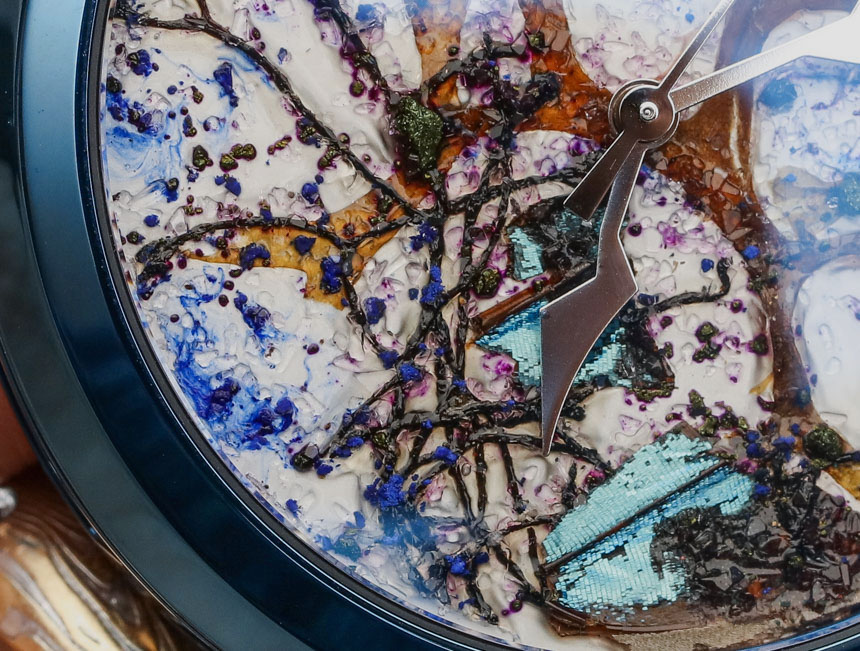 Arpa’s aesthetic isn’t all about blood and guts – even though there is a celebration of chaos in many of his designs. As the name of the brand implies, these are meant to be art, and in this brand’s opinion – art should not be mass produced. Among the new “Son of” collections (that started with Son of a Gun) for 2017 is the Son of Sea. These are watches with seaweed on the dials – as part of a long line of such concepts, which also includes dials with butterfly wings, spiders, tobacco, and human blood. The Son of Sea watches – each piece uniques, with the blue PVD-coated 44mm wide steel cases cost 7,900 CHF, unless you opt for the 137,000 CHF Son of Sea Tourbillon model. These aren’t to my personal taste as I prefer a bit more symmetrical structure in my timepiece designs, though I appreciate the novelty and know that ArtyA will have its share of takers. 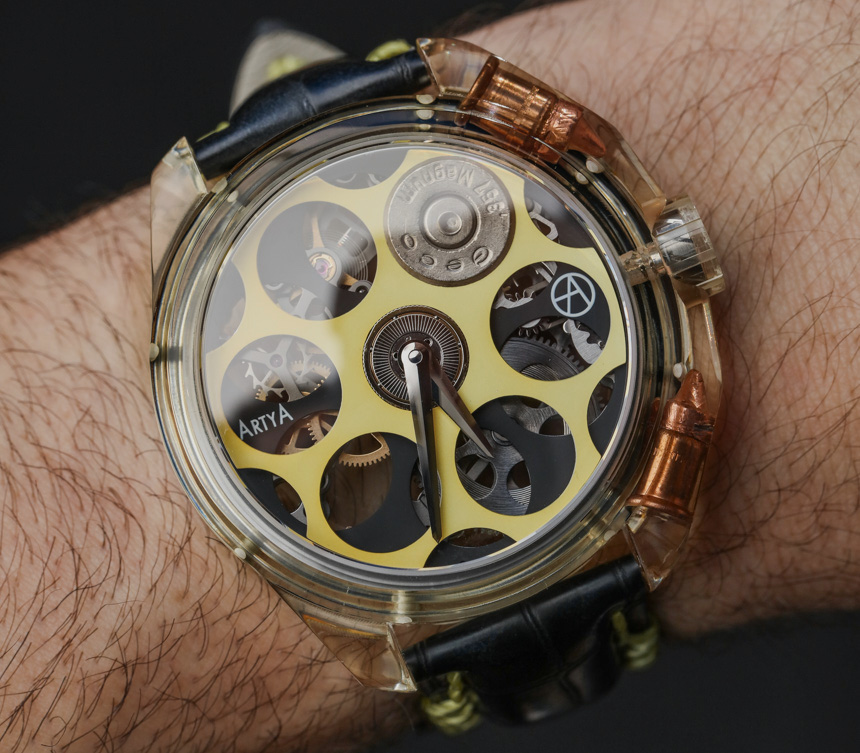 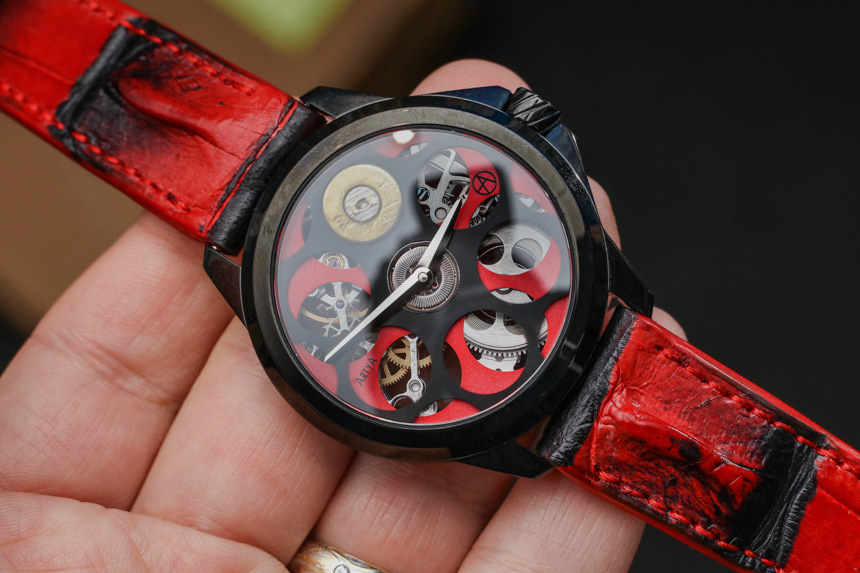 ArtyA Son of a Gun watches are probably Arpa’s most popular collection. The Son of a Gun family is currently segmented into 10 different product families – each with their own take on placing parts of actual bullets on the dial of a watch. The Son of a Gun Russian Roulette are perhaps the most popular. A spinning disc made to look like a six barrel gun chamber of a revolver has the one hole filled with the rear of an actual bullet. This disc spins freely, and of course the visual effect is akin to what I imagine spinning the chambers during a game of Russian roulette might be like – albeit safer. Also in 44mm wide cases, the Son of a Gun Russian Roulette watches come in a host of styles starting at 7,700 CHF and going up from there. One new model is the 17,900 CHF version in a transparent resin case that has more bullets set inside of it. 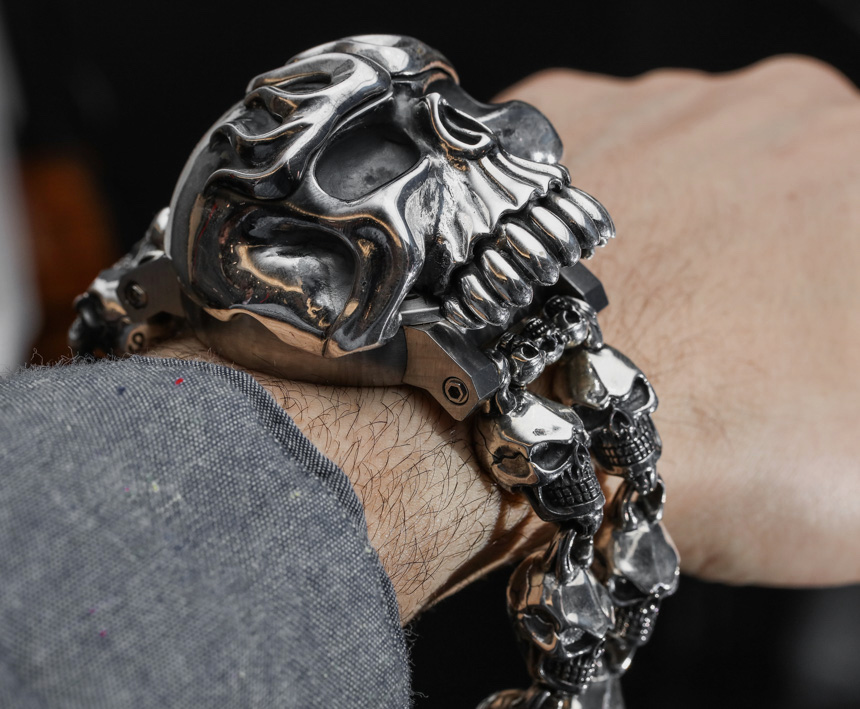 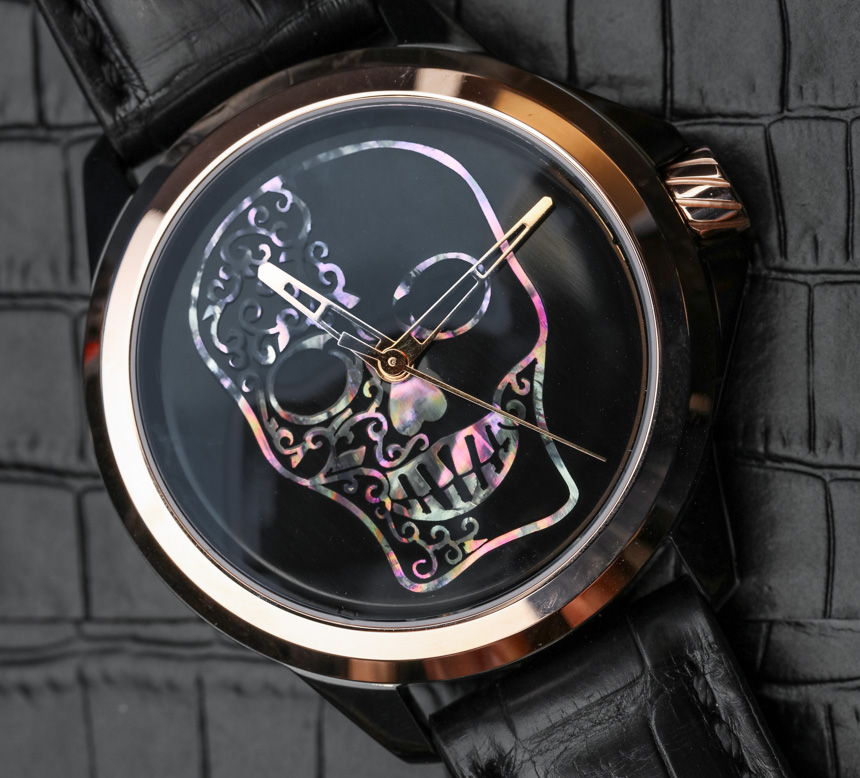 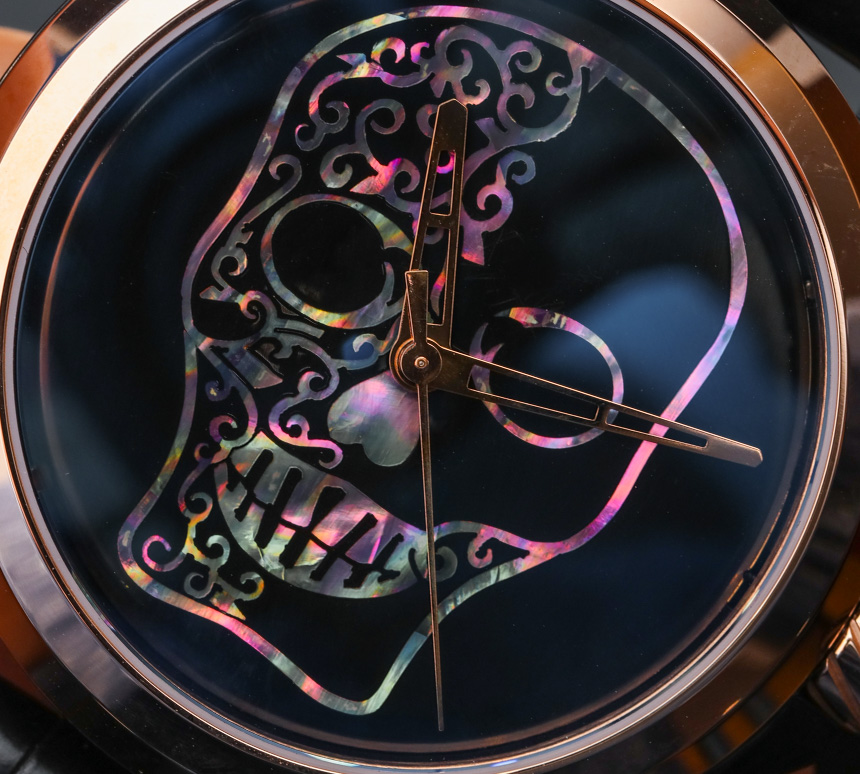 Not all of the 2017 ArtyA watches represented the more brash side of Yvan Arpa. There was a considerable amount of more classic art – much of which was in beautiful form. If you like skulls on your watch dial but prefer something a bit less aggressive, there is the also piece unique Mother of Pearls Skull watch in the Son of Art collection within Artya. This attractive piece has an artistic skull produced with mother of pearl inlay against a black lacquer dial using a special “Ott-Cjill” technique. Containing an automatic movement, the 44mm wide case is black PVD-coated steel with “ArtyOr” gold inserts on the side and a matching gold crown. Price is 12,900 CHF. 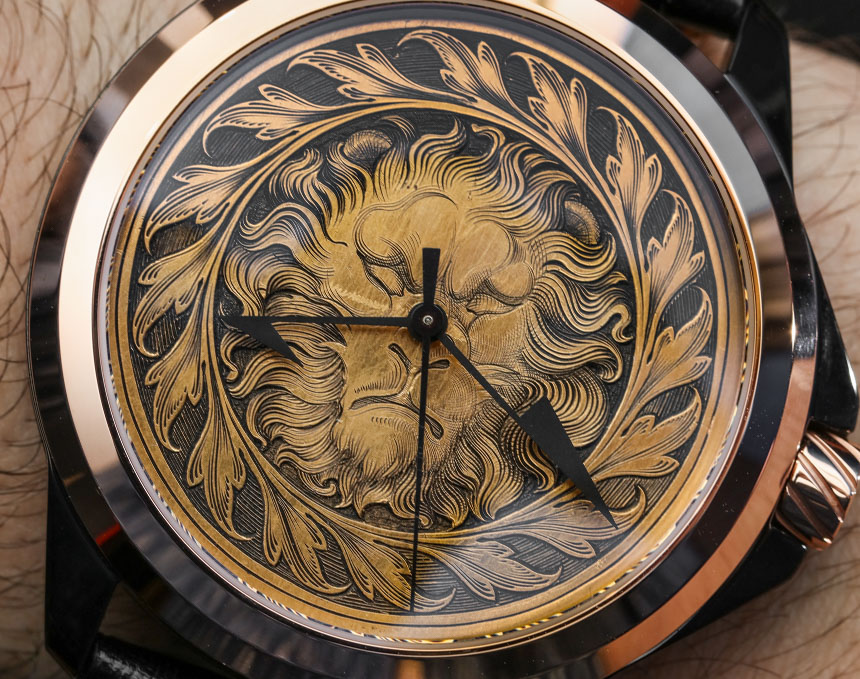 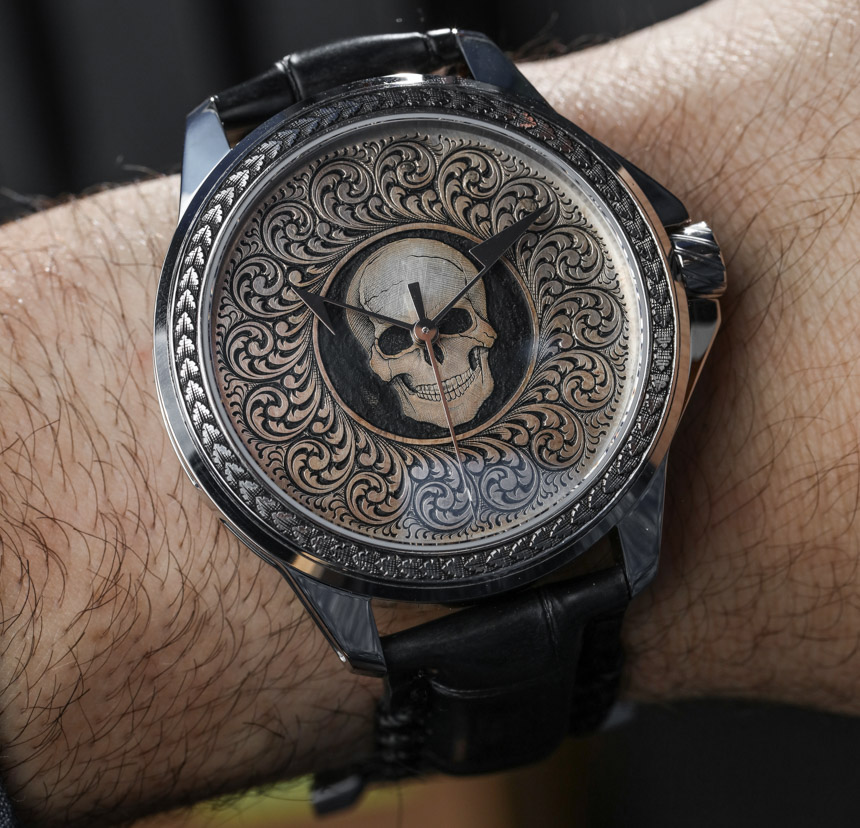 Other ArtyA Son of Art collection watches contain the various piece unique Neo-Renaissance models with various cases and dials hand-engraved by a master engraver from Belgium. These are my favorite models out of the new 2017 ArtyA watches given my own personal tastes – and because I just happen to currently really be into these types of engraved designs. ArtyA has a few of these, and each focuses on decorative patterns or includes a subject such as a skull or a lion. These Son of Art Neo-Renaissance watches are priced at 24,900 CHF. 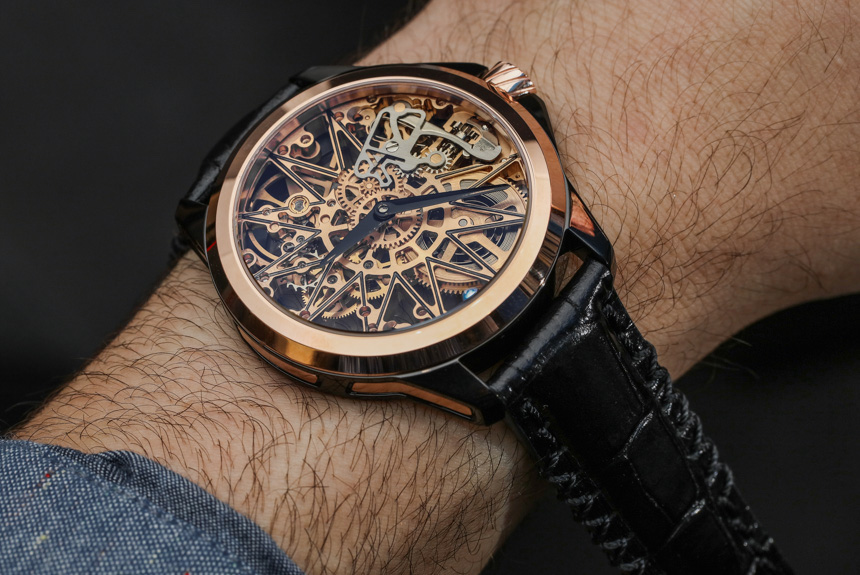 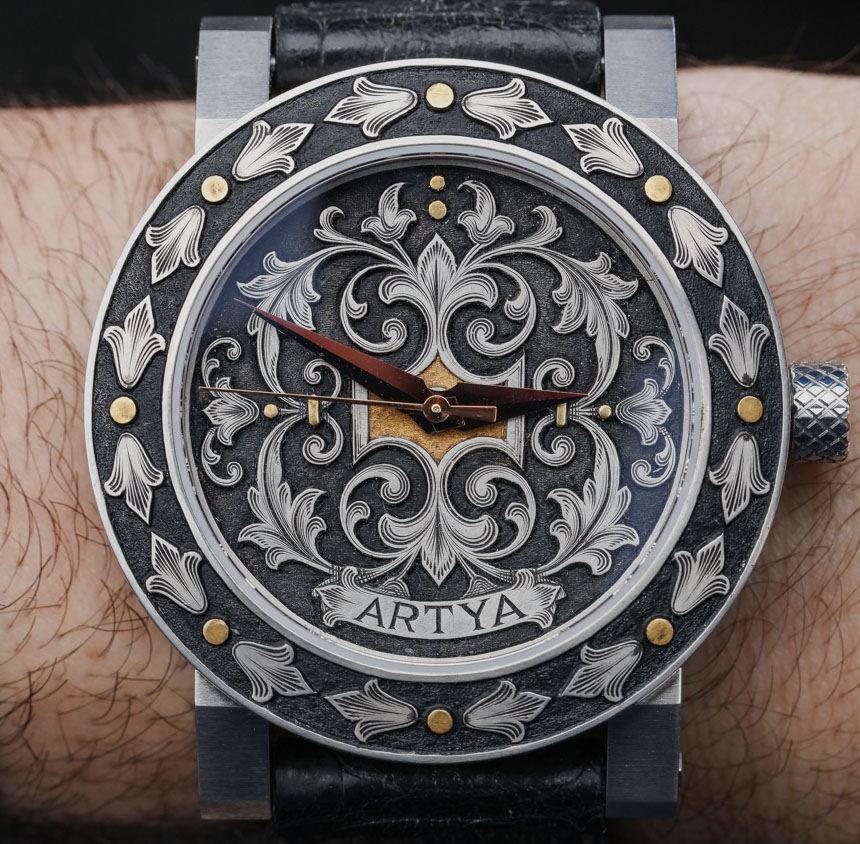 You can spend 23,900 CHF on a Son of Gears Shams collection watch in a steel case set with a fair number of large diamonds, but this is also one of ArtyA’s entry-level collections. The Son of Gears Shams watch is a simple take on a skeletonized manually-wound mechanical movement – though done in an ArtyA-manner. I quite like them. The movement skeletonization is spirited, and the overall combination of colors and styles is attractive. These are actually among the most conservative watches produced by ArtyA these days, and employ the brand’s standard 44mm wide steel case. Prices start at 4,400 CHF, go up to 5,400 CHF in PVD black, 6,400 CHF with a chocolate gold color, 12,900 CHF in a two-tone steel and gold case, and 7,400 CHF for a Son of Gears Shams collection watch with a hand-engraved bezel. 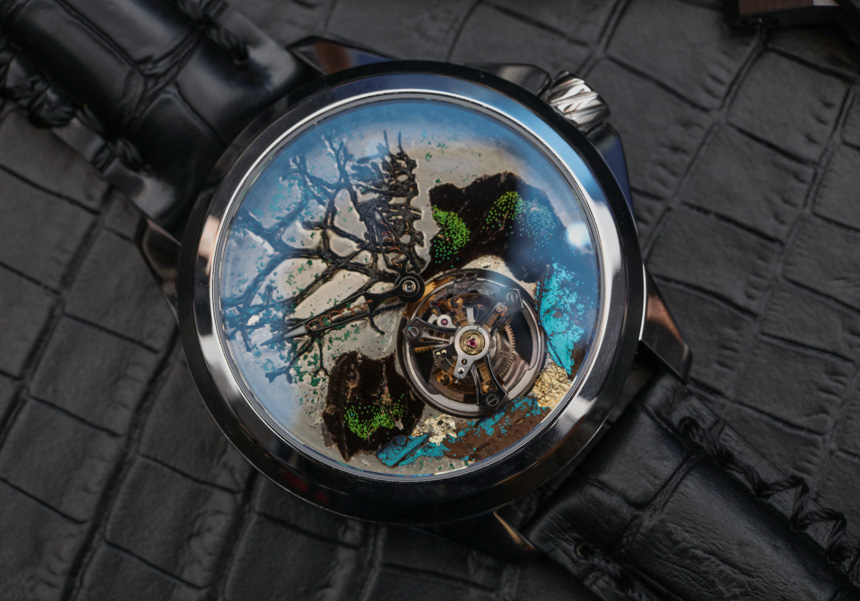 ArtyA, as an “art watch” maker will never be as affected by the ups and downs of the watch industry as larger brands. The boutique nature of the company, along with their lower production numbers means that they will intentionally remain small, which is likely how Yvan Arpa likes it. The strange, and sometimes totally uncanny sense of design and theme in the watches will be an inevitable draw to the right rare types of people around the world. As long as these individuals can find ArtyA, Yvan Arpa can find an artistic outlet. artya.com