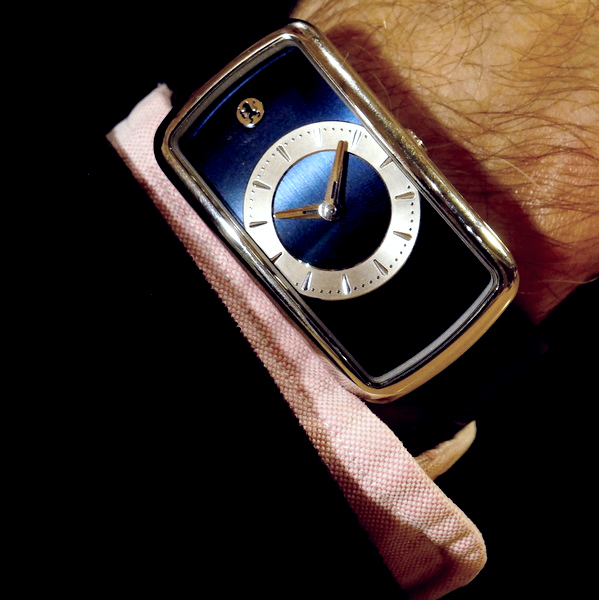 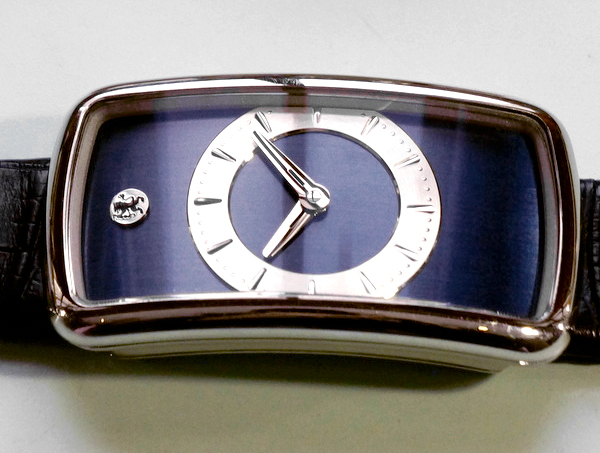 Badollet is a brand that is not very well-known but has been quietly gaining recognition for this particular piece, the Ivresse, which I had a chance to see being made at their atelier in La Vallée de Joux near Geneva.

For those who do not know, Badollet is a young company, having started recently in 2006. The circumstances under which the company was born however are very interesting and speaks to the long history of Swiss watchmaking.  Badollet in its current conception is a revival of an old company name.

The original Badollet was a company that was started by Jean Badollet in 1655, the first of an unbroken line of watchmakers all the way to 1924.  Some of the highlights of the Badollet watchmaking dynasty include the publication of “L’Excellence de L’Horlogerie” by Jean II Badollet in 1689 and the fact that Jean-Jacques I, another descendant, supplied parts and finished watches to Abraham-Louis Breguet in Paris.

The company closed in 1924 having been affected by the outbreak of World War I and the stagnation of all economic activity. The last of the Badollets, Gustave Badollet, was unable to carry on the business, and the company was sold.

It was only many years later, that a descendant of the Badollet family discovered that her great, great grandmother ran the original Badollet factory in Geneva. It was then that she made the decision to re-launch the brand with a new watch company.  A private investor/watch-lover joined the fold, and the new company was started to produce high-end watches in limited quantities. 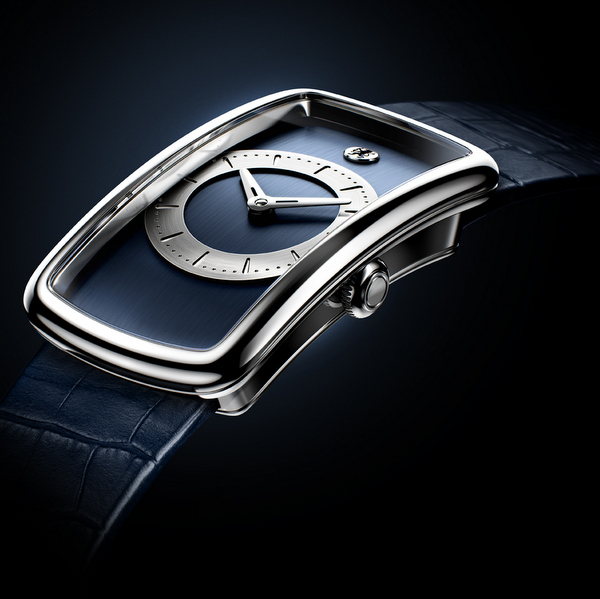 The Ivresse as pictured above is Badollet’s latest creation and is certainly a magnificent watch. Its distinctively curved case, rich blue and uncluttered dial is the sort of watch that is memorable enough to launch a brand from obscurity into the realm of public consciousness. Indeed, when I first saw pictures of this watch, it was elegance exemplified. An aesthetic rigor pervades its design, pulling in a combination of a brushed chapter ring against a blue backdrop on the dial, with the Badollet logo at 12 o’ clock, set against curved and polished surfaces of the platinum case. 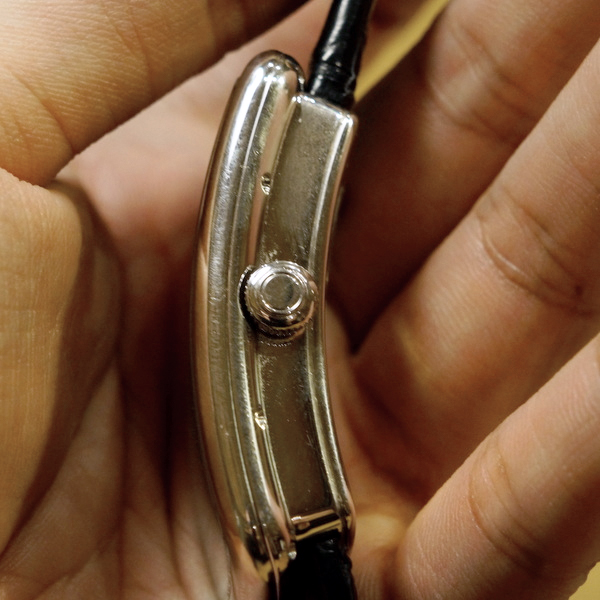 In fact for me, it is the curvature of the case that is a sight to behold, and the very thing that raises it into the realm of pure tactile pleasure. In the hand, the Ivresse is weighty due to the use of platinum yet smooth and without any edges. This design was a result of a collaboration between Badollet and noted designer Eric Giroud, who was asked in the design brief to make the watch as simple as possible. Given the result, it is obvious that he succeeded beyond the brief as the resulting design is stunning in its simplicity. 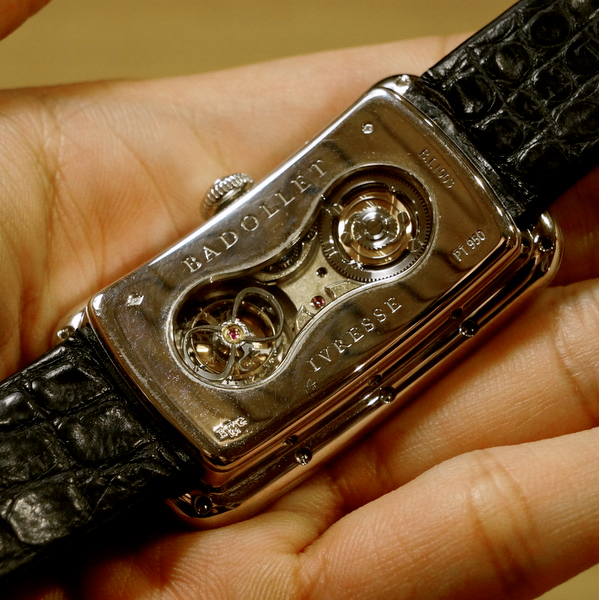 A noted feature of the Ivresse is that the curved case contains a tourbillon, which is viewable through a window on the case back. Although, had I been more familiar with the brand, it would not have come as a surprise. As CEO, Philippe Dubois told me, the signature complication that every Badollet watch has, is a tourbillon. As a niche brand among niche brands and to project an aura of exclusivity, the decision was made at the re-launch to have a tourbillon in every Badollet watch without exception. Having the curved case and a tourbillon as the basic ingredients for the Ivresse, Badollet turned to David Candaux, a young watch-maker formerly with Jaeger-le-Coultre, to solve the technical challenge of putting it together. 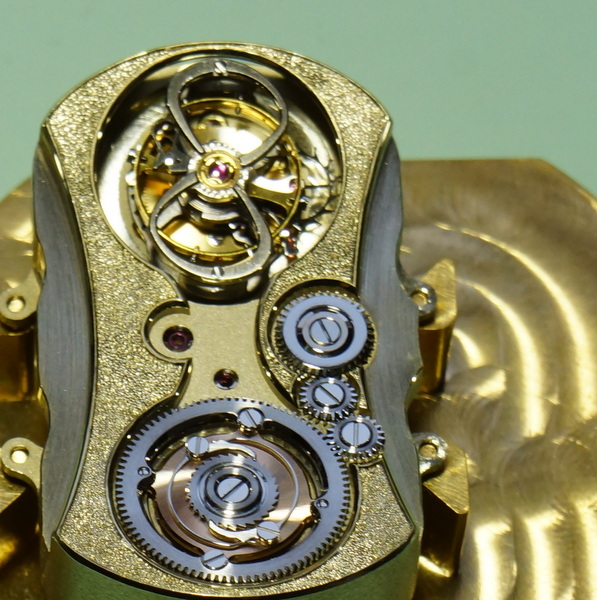 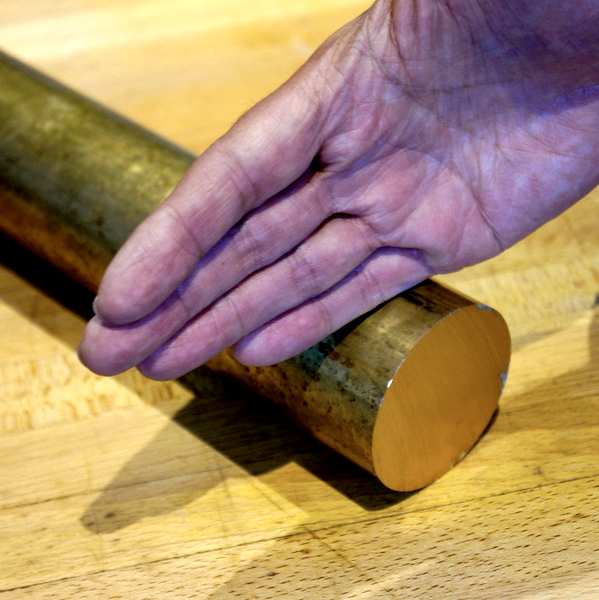 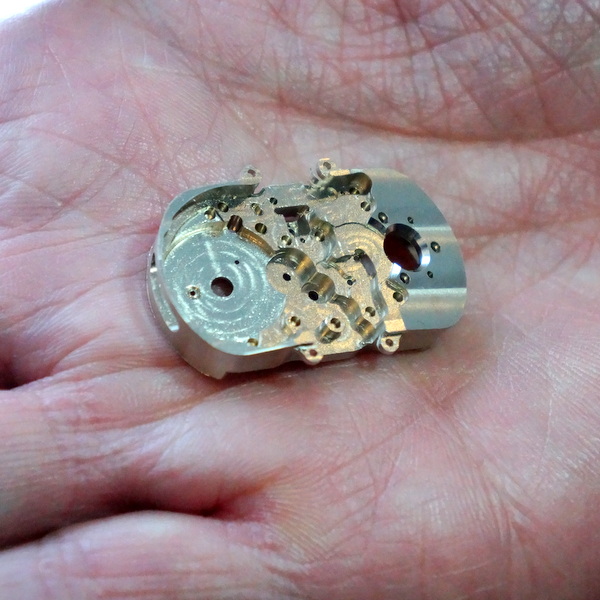 During my visit, I was able to see the base plate being cut, machined, then worked to finally produce the curved foundation of the watch.  As you can see in the picture above, it was a little weird to hold it in my hands as I am only familiar with flat base plates. This one however felt like a normal base plate that had been melted in the middle and deformed. Still, even at this stage, the curve of the watch can be felt by running your fingers over the base plate. 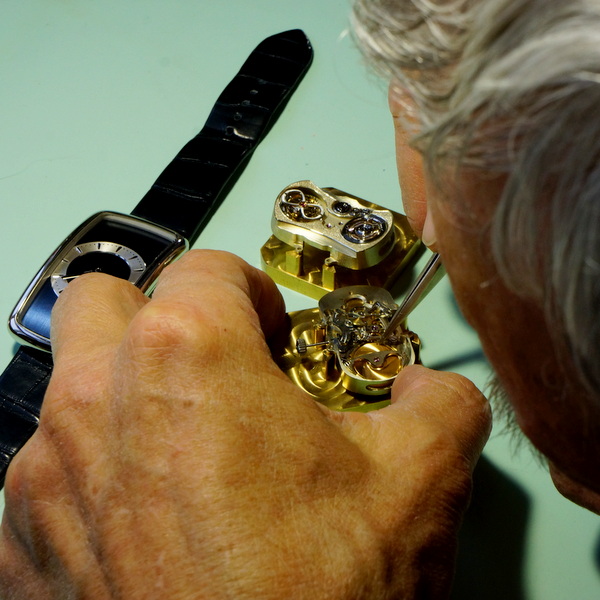 In a further stage of production, you can see here that the movement is being put together by the father of movement designer, David Candaux.  One thing I noted was how much smaller the space was in comparison to most watches for the movement of the Ivresse to fit into. It was certainly a technical challenge to design it, and from the look of things, very difficult to assemble. Consider the space for the tourbillon. As a heightened test of assembly precision, in the narrow confines of a space with somewhat limited access, the difficulty level is considerable.

Note as well, the custom movement holder in the picture above, which is secured by screws and are the same mounting points for the movement in the case. 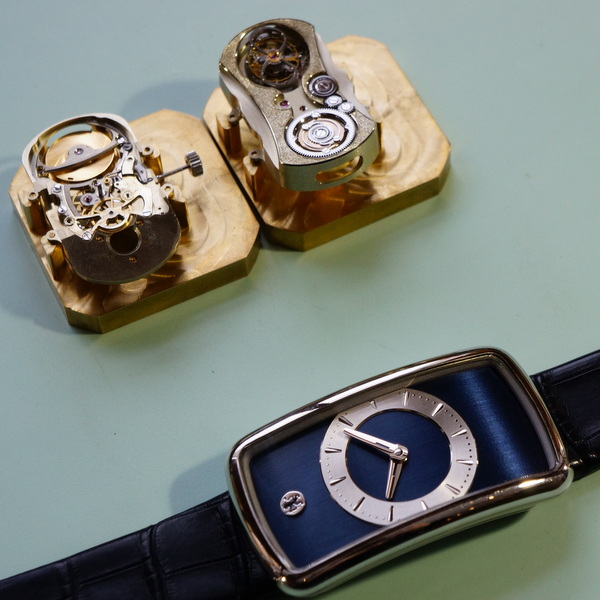 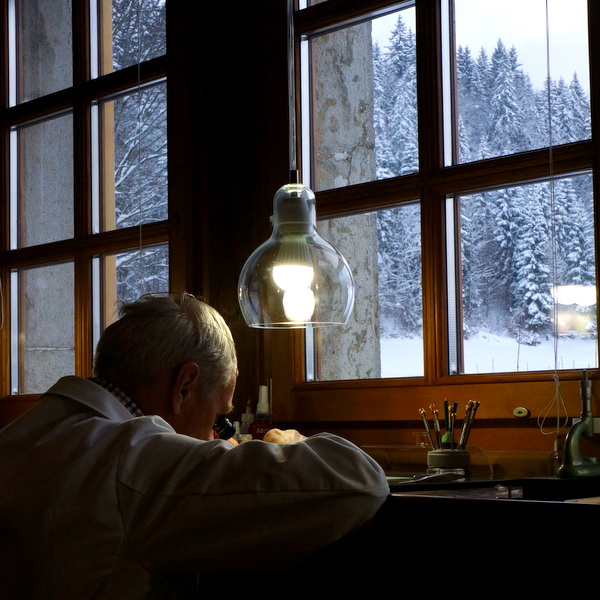 As it stands, Badollet watches are characterized by an extremely limited annual production of 50 watches with prices in the 200,000 CHF range. Without exception therefore, Badollet is firmly in the super high-end category of watches.

The Ivresse in my view is interesting as it represents a break from previous Badollet watches in terms of design and conception. Past Badollet watches, to be fair, were somewhat more traditional in looks and in step with the competition. It was all familiar case shapes, precious metals and the sort of me-too formula that didn’t really raise much attention.

It was only when movement supplier BNB went out of business that Badollet was forced to come up with something new. It seems that, with the result being the Ivresse, this was a development that turned out to be for the better.

By working with top talent like Eric Giroud on the design and David Candaux on the movement, Badollet have created something new and exceptional, which has placed the brand firmly into the consciousness of the watch connoisseur. 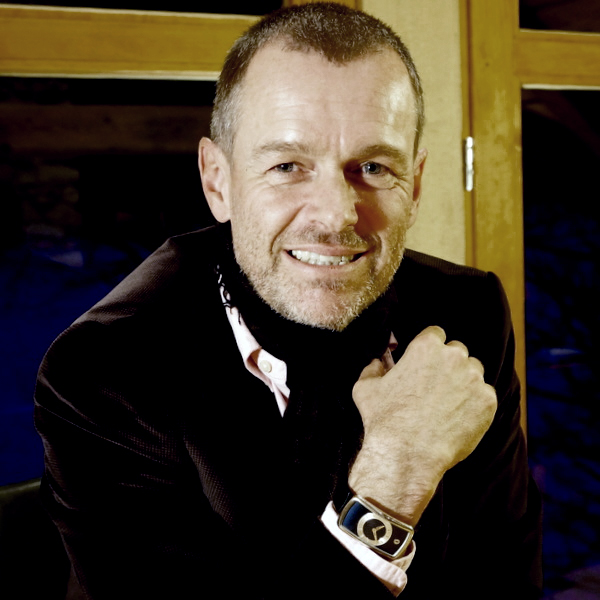 Speaking to Philippe Dubois, who came off a ten year stint as CEO of Concord to take up the CEO position at Badollet, this new direction was chosen for practical reasons (the bankruptcy of BNB) and also to separate the brand from the morass of competition.

It was interesting to hear him describe his view of the true motives of a watch buyer willing and able to spend 200,000 CHF on one watch. True luxury in his view is horological significance, hand-craftsmanship, limited quantities and in the case of the Ivresse, being able to be discreet about your wealth.

While the Ivresse has an instantly elegant presence on the wrist, it carries no brand markings save for the Badollet logo of the lion at the 12 o’clock position on the dial. The tourbillon within, the marker of high price, is exposed from the rear, but only at the discretion of the owner will you get to see it.

I wasn’t very sure about this though, given that a potential criticism is how to justify a huge price tag with such a simple design. The fact of limiting quantity to 50 pieces annually doesn’t help when many watches in this price range are naturally limited to small numbers.  The only two advantages that I can put to a potential Ivresse buyer is that the design is unique (you would really have to love this particular design) and the speed of delivery. I was told by Philippe that Badollet were able to respond quickly to a customer order and deliver the watch much quicker than other brands.  Two weeks was one example he mentioned.

Another thing that came to mind when I was looking at the Badollet website was how the design of the Ivresse was quite feminine and not something that some men would like. That is entirely reasonable to assume but after having seen the watch in person, I have realized that the case from lug to lug is 53 mm, which is quite large for a woman’s wrist. The danger of course is that potential male buyers see the picture and assume it is a woman’s watch and dismiss it out of hand.

However, I think that this meandering thought is only a minor concern since nobody buys a 188,000 CHF watch based on a photo, and I believe there are enough men out there who can appreciate good design when they see it. I was certainly one of those, and the sales process for such an expensive watch, being the involved process that it is, will likely show the many stellar qualities of the watch on top of the fabulous design.

The Ivresse may come off as something of a one trick pony with its curved case, but that loses sight of the package as a whole.  As a marker of things to come, it is very exciting to see this young brand gain market traction in such a memorable way.

In fact, the Ivresse and in particular the movement, has received some nice compliments from famed neighbor, Philippe Dufour, whose atelier is just a five minute walk away from Badollet in the Le Solliat area.

At the recent Basel fair, Philippe Dufour came up to the Badollet booth to have a look at the movement of the Ivresse. After moments of intense scrutiny, he turned to the people at Badollet and declared “In the future, there won’t only be one address in Le Solliat, but there will be two different addresses.”

That is a compliment that any young watch brand would like to have, and for the Ivresse, Badollet certainly deserves it.