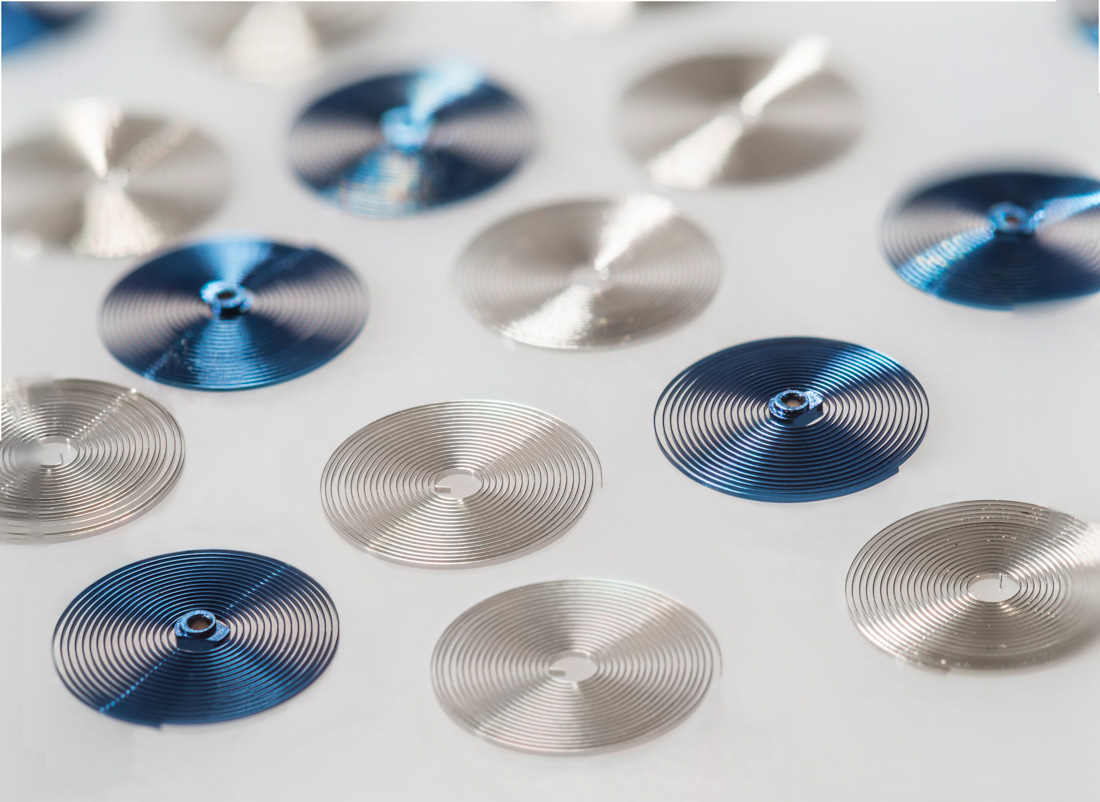 How Balance Springs Are Produced In-House At H. Moser & Cie. 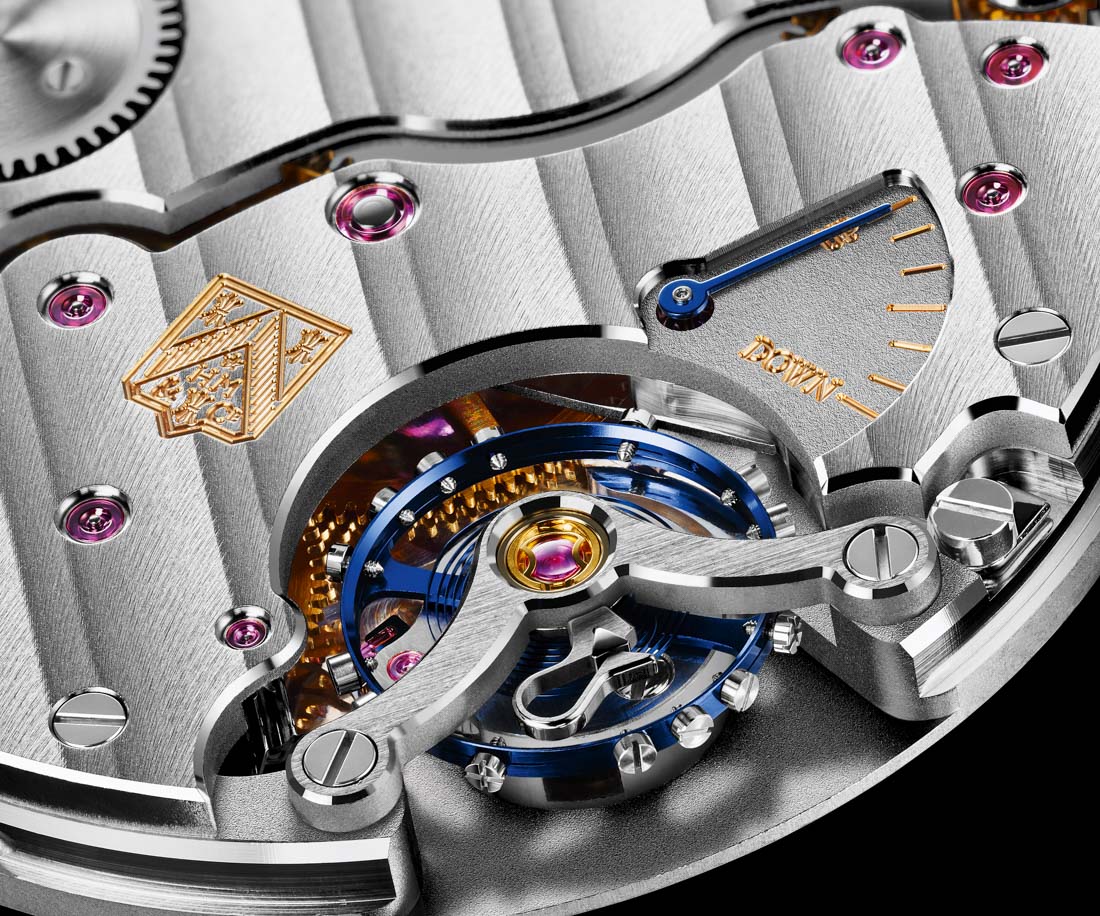 Following an in-depth look into the manufacture, and also the fascinating and adventurous history of H. Moser & Cie. here, today we will discover the remarkable way balance springs are made in-house at H. Moser & Cie. What we will find is a unique blend of 21st century manufacturing technologies and traditional Swiss watchmaking know-how, all coming together to produce the one component so essential and yet so incredibly difficult to produce even in the modern watch industry. 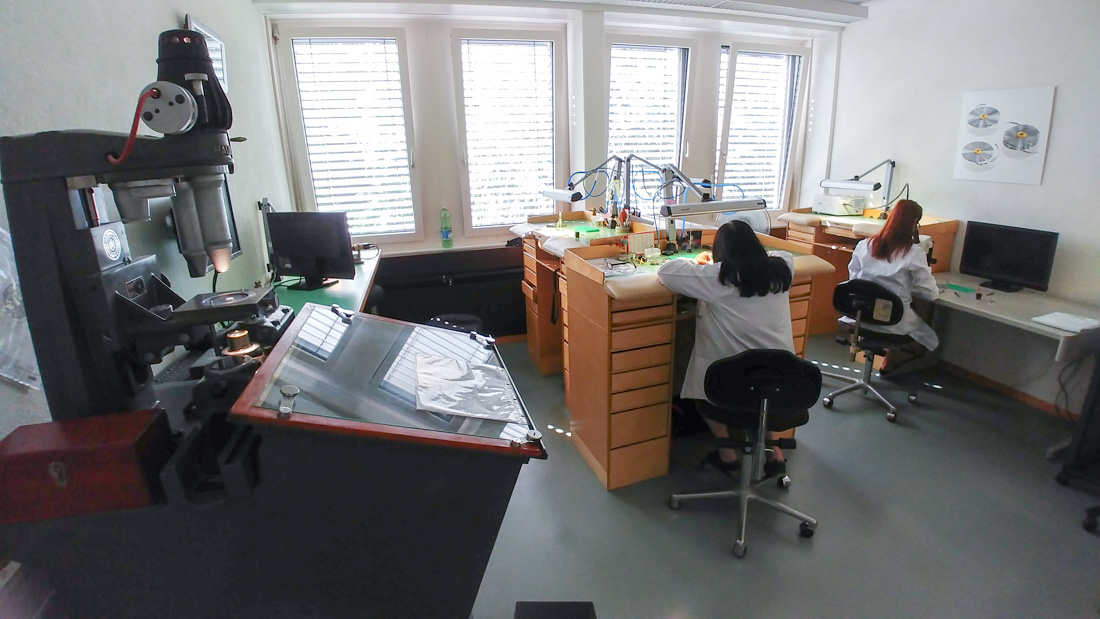 As we have discussed in the manufacture visit article, the Moser Watch Holding is split into two sister companies, with the H. Moser & Cie. watch manufacture comprising some 43 watchmakers, engineers, and staff, and Precision Engineering AG another 12, making for an enterprise that today employs 55. Now, it is the latter, Precision Engineering AG that is responsible for both the balance spring and, as we’ll see in the second point, balance wheel manufacturing, along with other high-precision components like minutely small screws with microscopic threads on them. 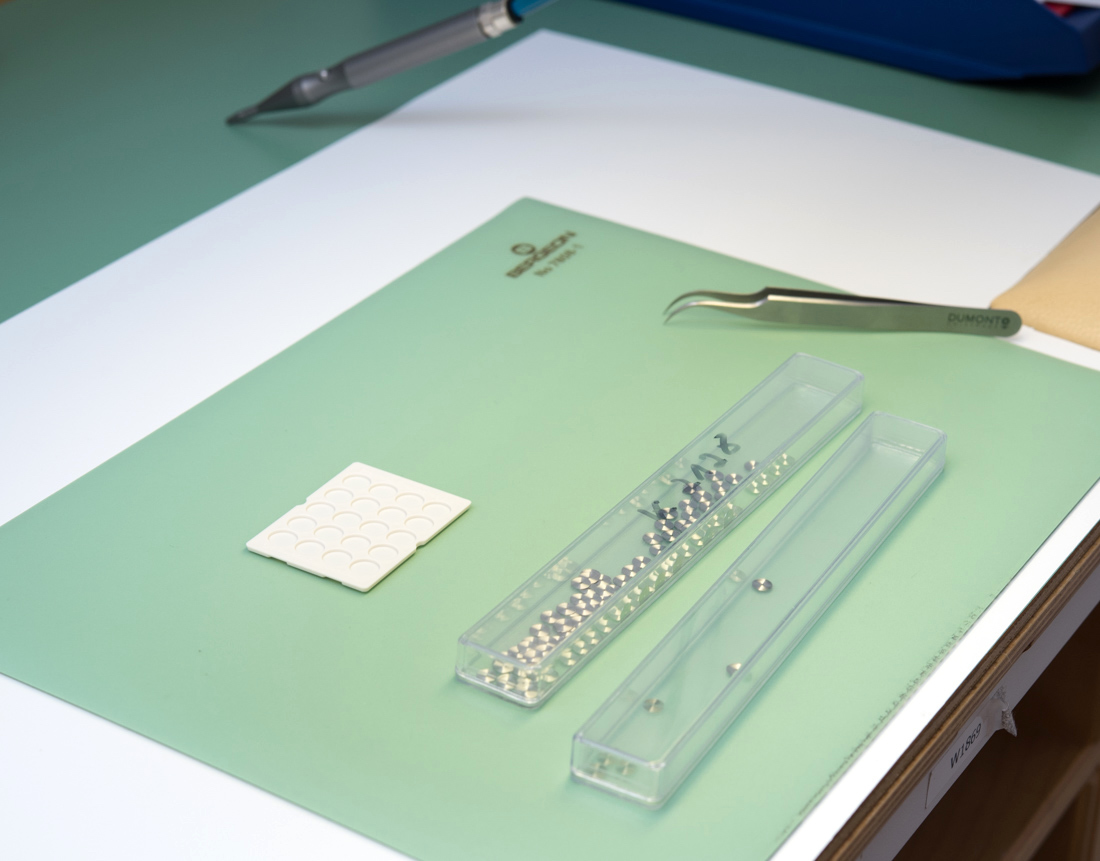 There are only a handful of places in all of the watchmaking country that is Switzerland capable of manufacturing something as infinitely refined and delicate as the balance spring of a mechanical watch movement. Seeing the machines and the specially set-up rooms – more like laboratories – on the lowest floor of the H. Moser & Cie. manufacture building helps better understand this bold statement. 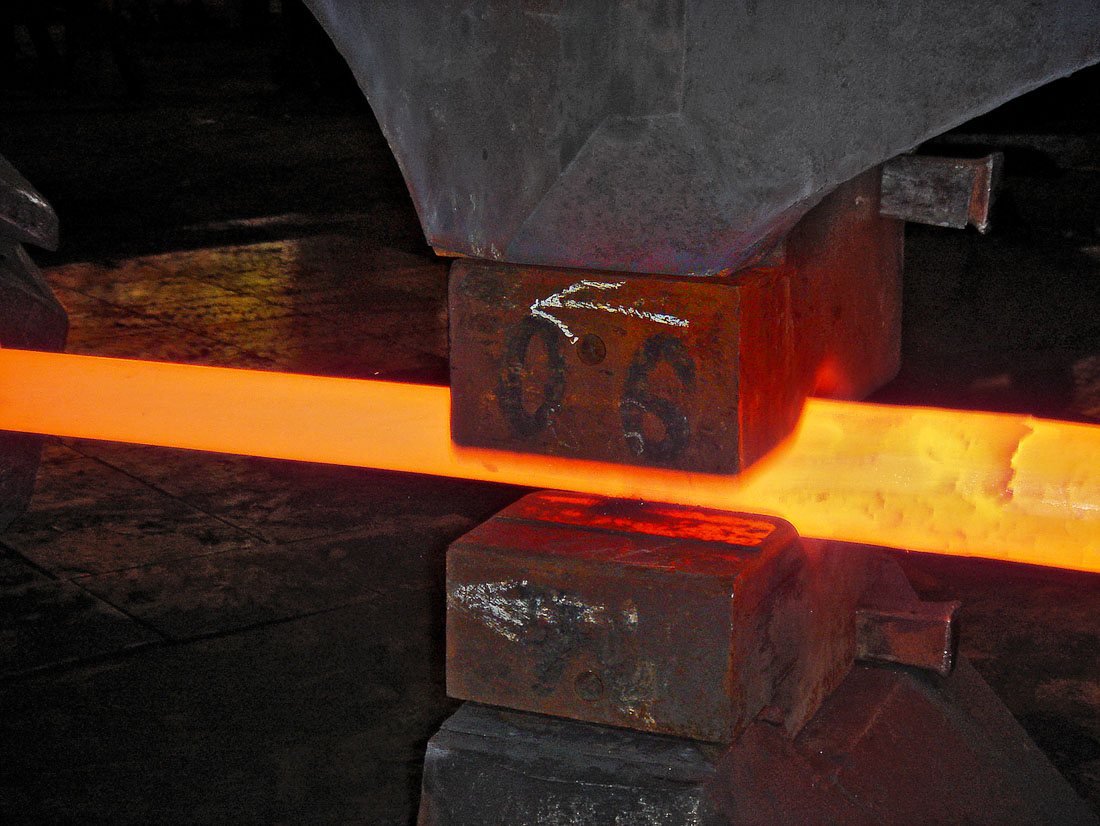 The main challenges linked to balance springs, also commonly referred to as hairsprings, include finding perfect homogeneity throughout the material crafted for the piece; creating an alloy that is stable, workable, and yet has enough resistance to be formed and shaped; and manufacturing such material to a tolerance level under 1 micron. Seen directly above is Precision Engineering AG’s PE4000 specially developed alloy in the process of its production – who knew such vicious heat and immense forces were part of the production of something as delicate as a watch’s balance spring? 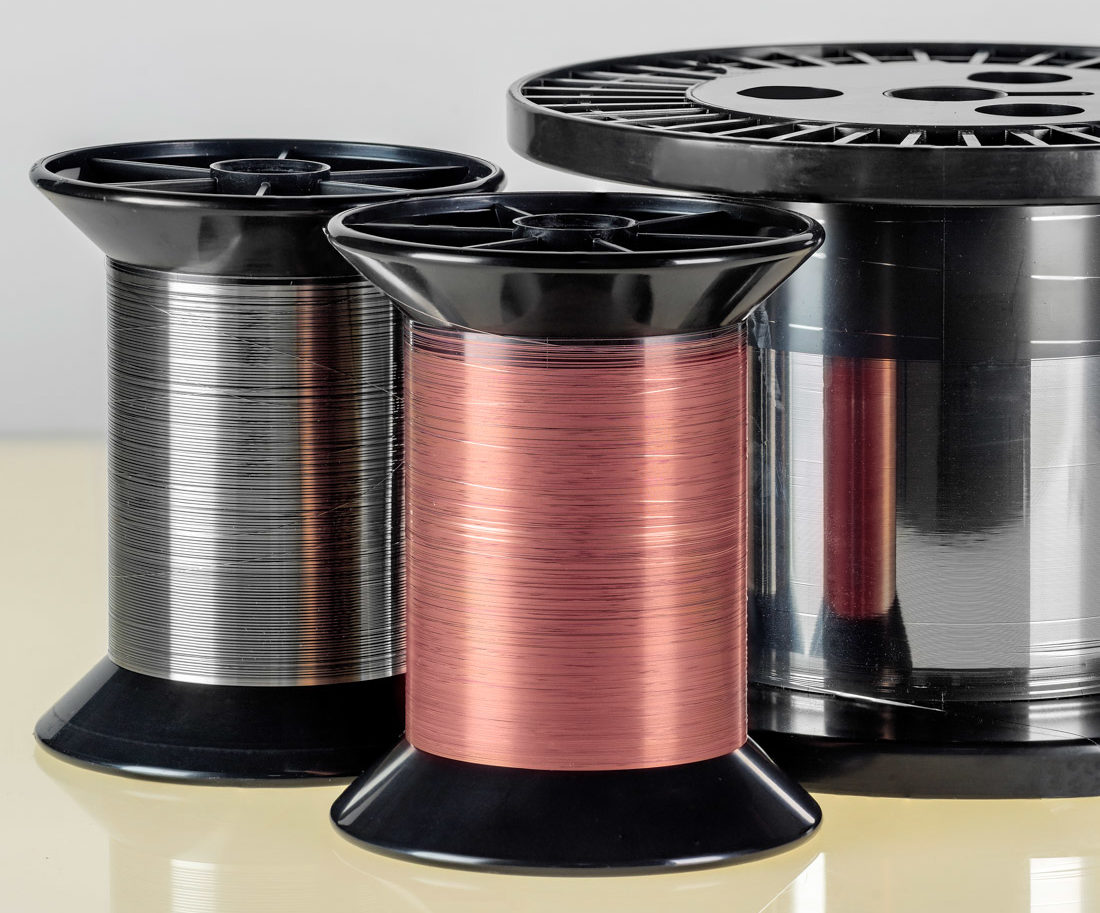 One more note on the alloy itself before we move on: Precision Engineering AG has researched and developed a yet newer alloy, the aptly high-tech-sounding PE5000. It is their paramagnetic alloy which they say is highly strategic for the future. Easily distinguishable by its cool pink color from the silver-hued PE4000 on the image above, PE 5000 is an alloy of niobium and titanium. Designed for performance and durability, it is a paramagnetic material that is both extremely durable and offers remarkable elastic properties, so that the hairspring made from this alloy is not affected by impacts. This is an invaluable asset for the oscillator of a mechanical watch, constantly in motion and subject to significant constraints. 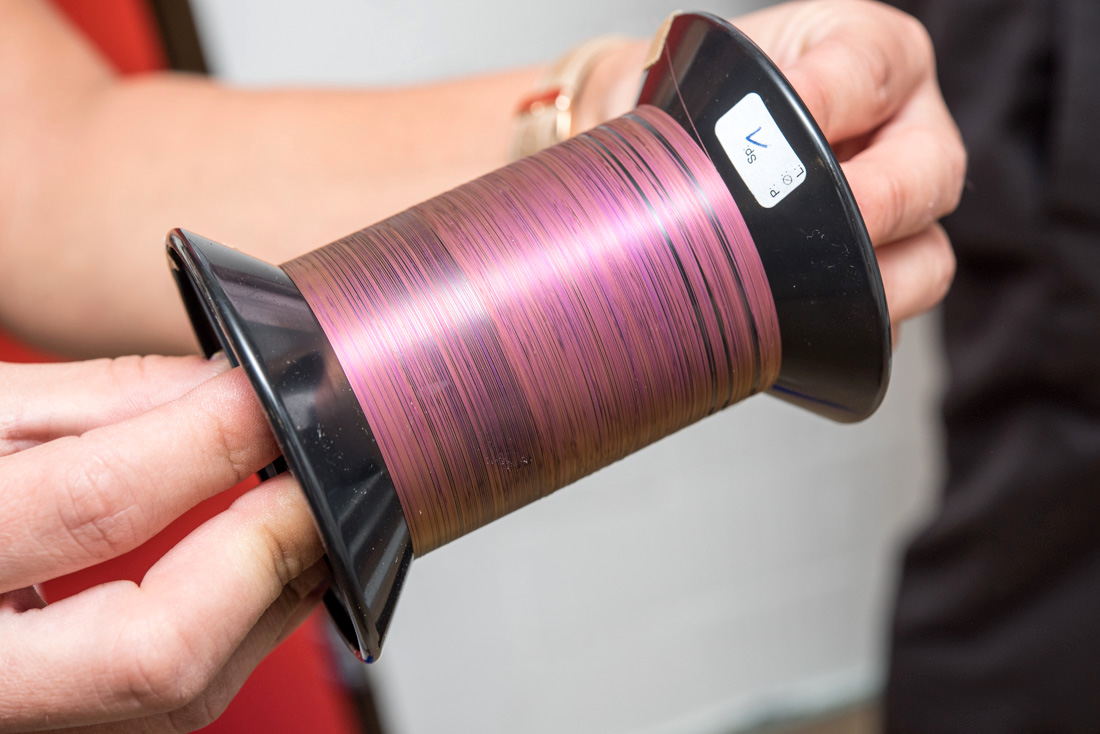 In fact, its shock-resistant and paramagnetic render PE5000 a rather interesting alternative to silicon, which is also non-magnetic and shock resistant, with the disadvantage of not allowing for any adjustments. Niobium-titanium, in contrast, can be adjusted by the watchmaker to optimise the watch’s performance if necessary and so stratospherically expensive machines only supported by equally high production quantities need not be invested in. All this and what we’ll see in this and the next article means that Precision Engineering is one of the few manufacturers capable of producing paramagnetic escapements, a major advantage in the Swiss watch industry. 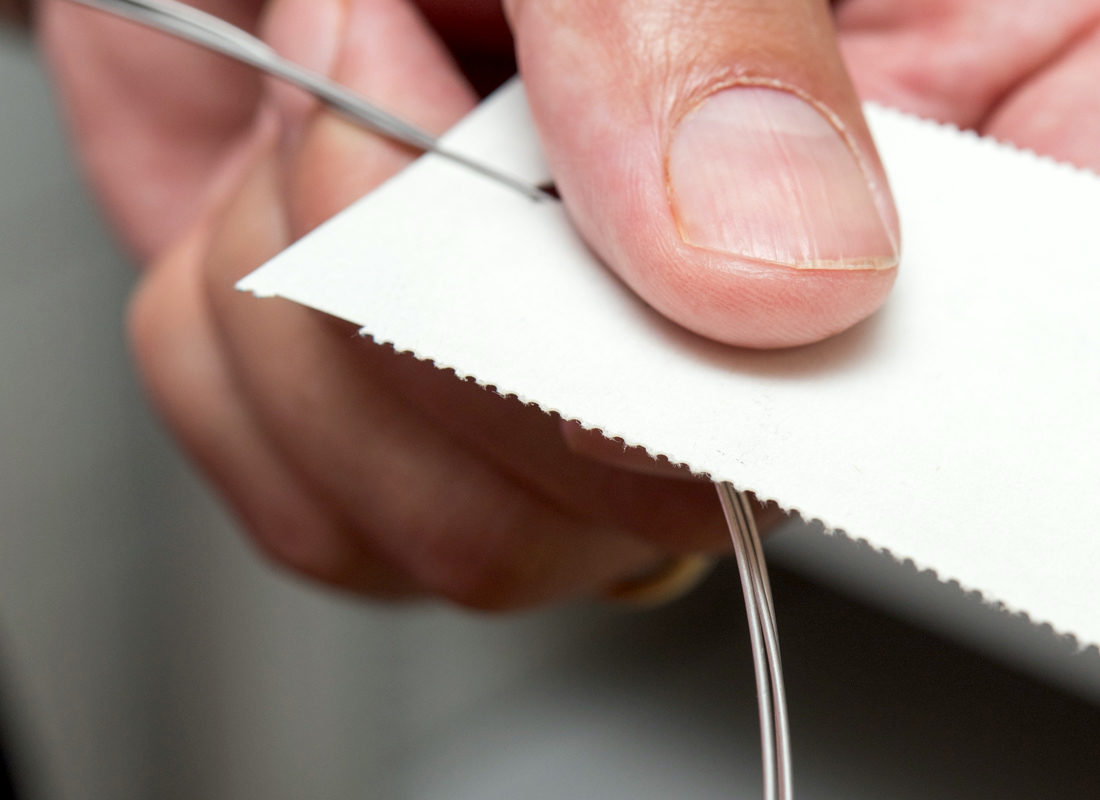 A hairspring starts its career as a thick and sturdy roll of metal, as seen on the image above. Precision Engineering AG receives this base material from trusted suppliers, but from the moment this relatively massive piece of metal enters the H. Moser & Cie. manufacture, it’s all in the hands of its engineers and craftsmen. Their goal is to take this thick and round roll of metal and, through a series of special procedures, turn it into a malleable blade crafted with genuinely incredible precision. 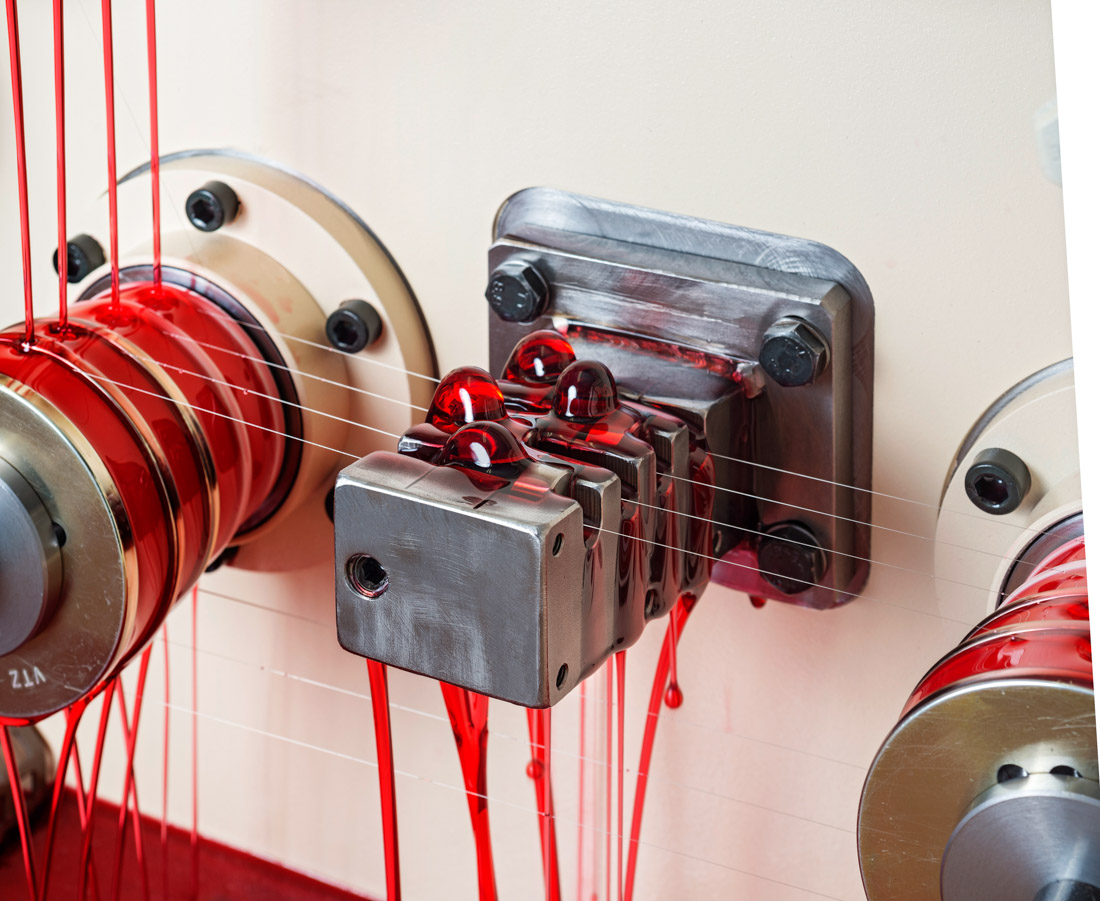 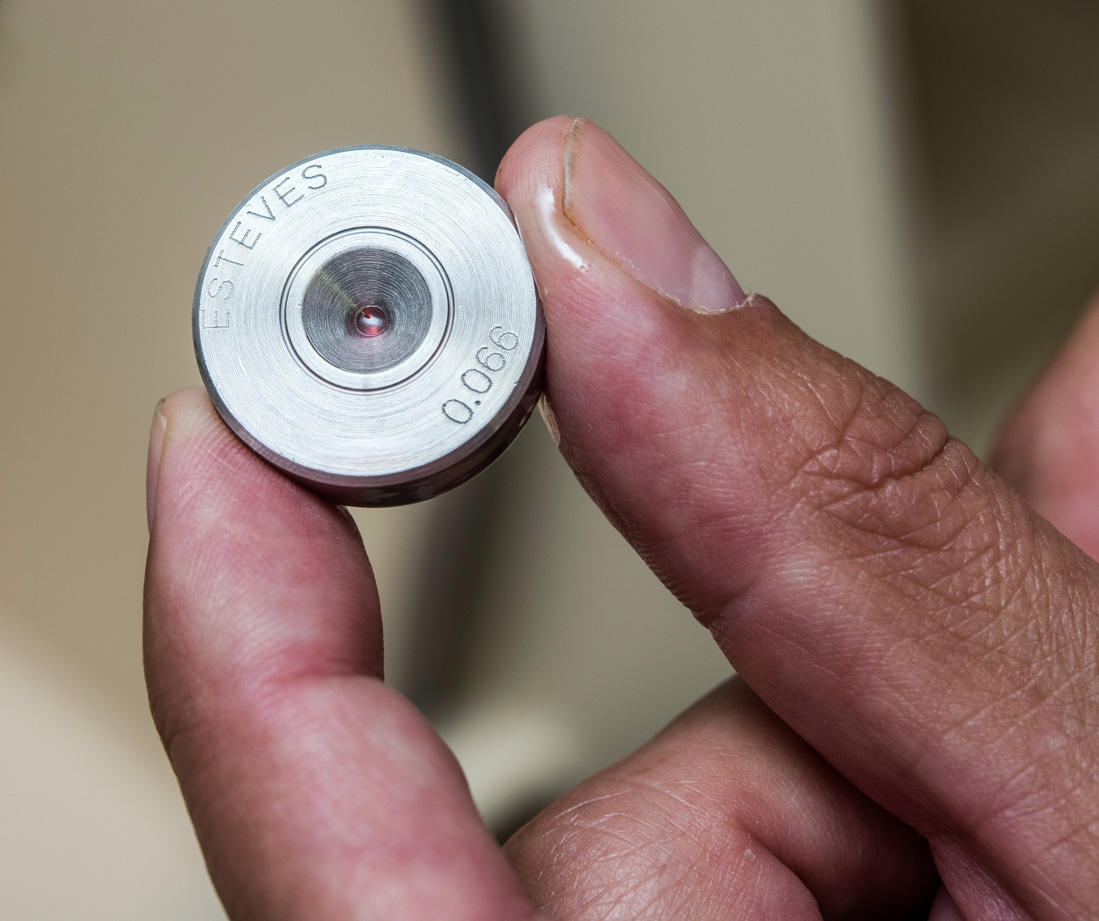 The first key step is called drawing or tréfilage. In practice, this is all about drawing or “thinning” the base material from its original thickness of about 0.6 millimeters down to between 60-70 microns, depending on the type of spring to be made. This is then followed by yet more precise drawing steps where the – at this point still round – metal is pulled through a range of rings progressively and incrementally smaller in diameter. The rings you can imagine as a metal ring with what appears to be a movement’s jewel in its center – on the ring the diameter of this jewel is noted often down to a ten-thousandth of a millimeter. During tréfilage the accepted tolerance range is under 1 micron. 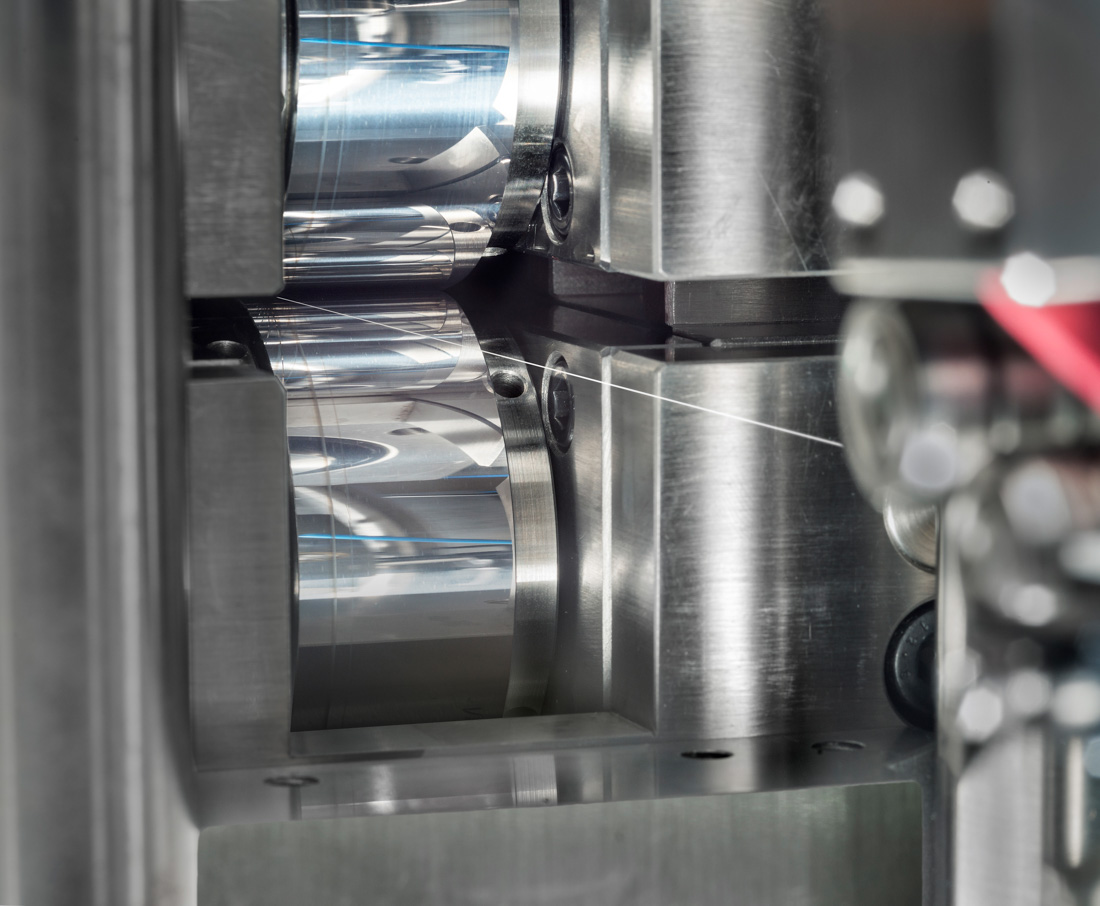 The next step is to flatten and stretch the still round base material through a series of painstakingly calculated steps, which require the utmost precision to ensure the material doesn’t develop any weak points from exposure to excessive heat or stress during the process. Ironically, the process to make the material flat is called rolling – for the base material is passed through a series of two rolls; in French the term is laminage, which is far less confusing as “rolling.” During laminage, the tolerated accuracy with which the component is manufactured is +/-0.00005 millimeter, which adds up to a barely comprehensible total tolerance range of 0.1 micron – that is one tenth of the thousandth of a millimeter. The finished material then gets stored on a roll and stored away, awaiting the next step. 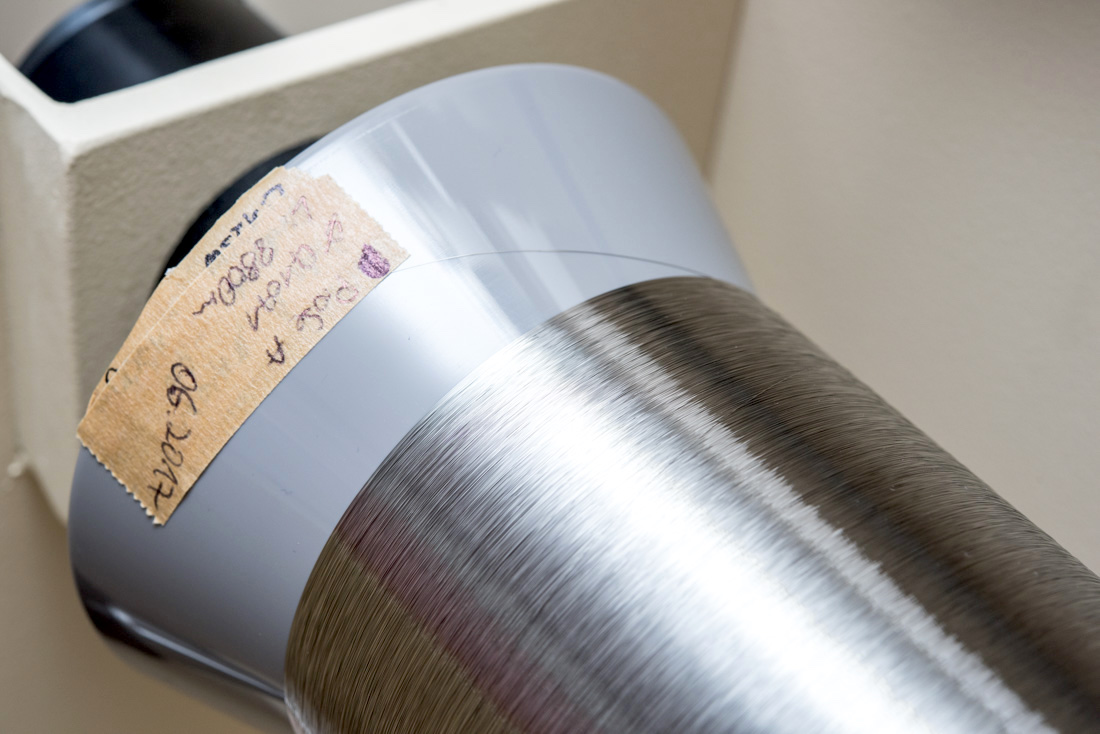 As is the case at any other step taken towards the making of a truly high-end watch, the hairspring must go through rigorous quality control processes at the different stages of its production to ensure the aforementioned strict tolerance standards are met. As such, at the end of its production, a hairspring is measured to a tolerance of half a micron – that is 0.0005 millimeters, or about 1/10th of the already minuscule tolerance applied when producing other movement parts, like drilling holes for the movement’s jewels. 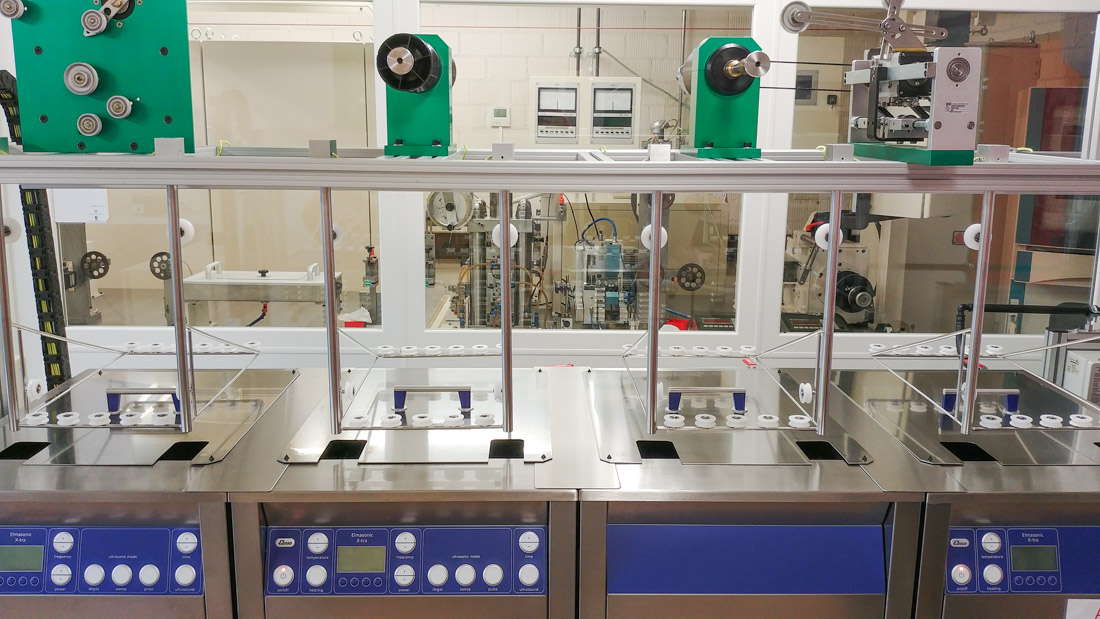 In fact, this truly imperceptible amount of acceptable deviation can only be measured in a specially set-up laboratory, where a measurement is affected by the slightest changes in the environment. First, the pieces must be cleaned and then transported to a controlled room in which there can only be only one person at any given time to allow for a set temperature and humidity to be maintained. Better still, he can only take just one measurement and then leave the piece to rest for several minutes. 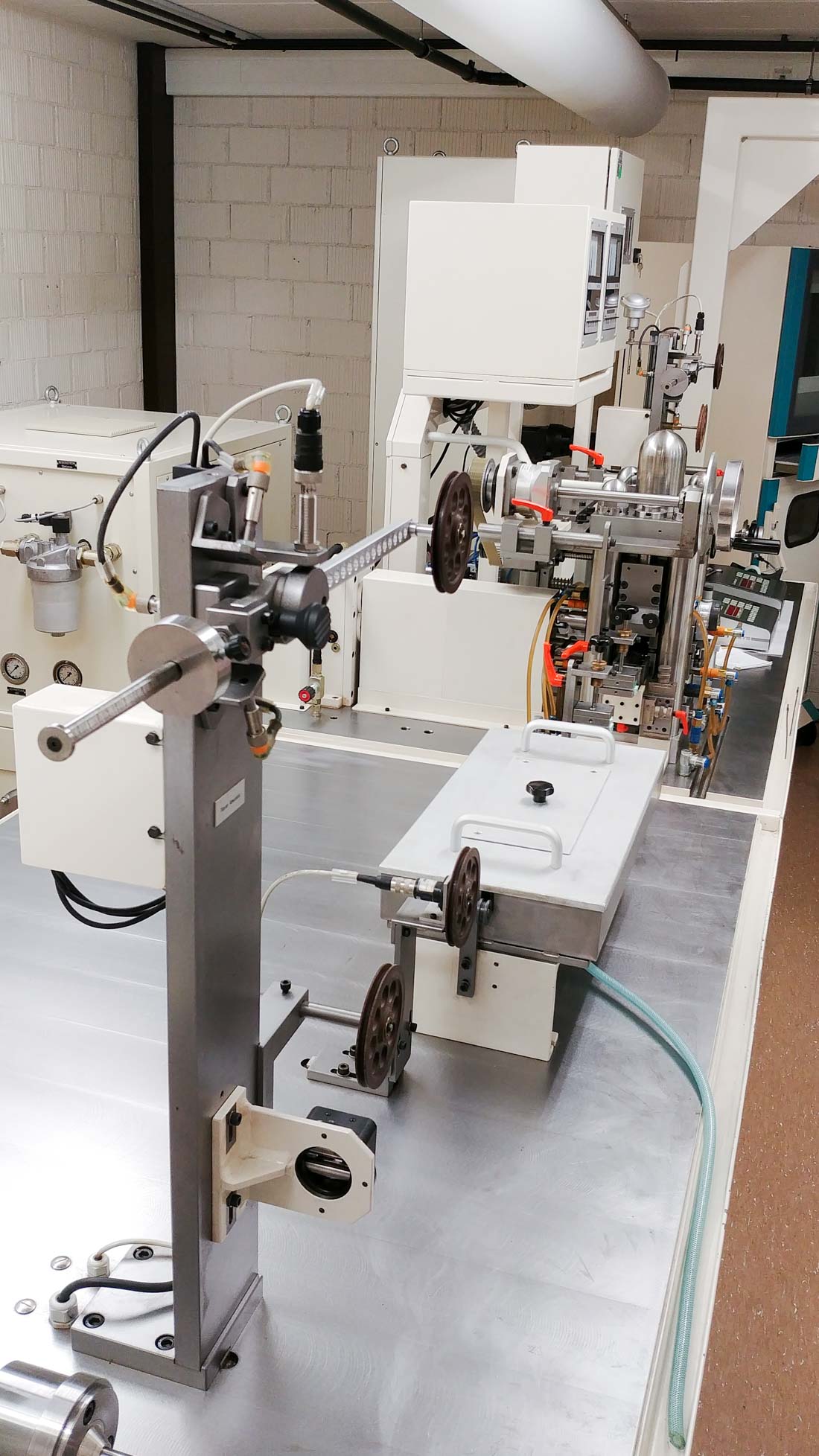 Above, you see a massive device that takes part in the production-controlling process in the making of a watch’s hairspring. The reasons behind all this is that the measurements taken are so incredibly accurate that even the warmth of a human’s hand holding onto the randomly selected test piece will result in microscopic expansion in the material – take ten consecutive measurements and all ten will be different just for this one factor alone. As such, one of the main challenges in making hairsprings in-house lies well beyond the already complicated processes performed in creating the hairspring blanks, as it ultimately all comes down to measuring and enforcing this immeasurable tolerance accurately. 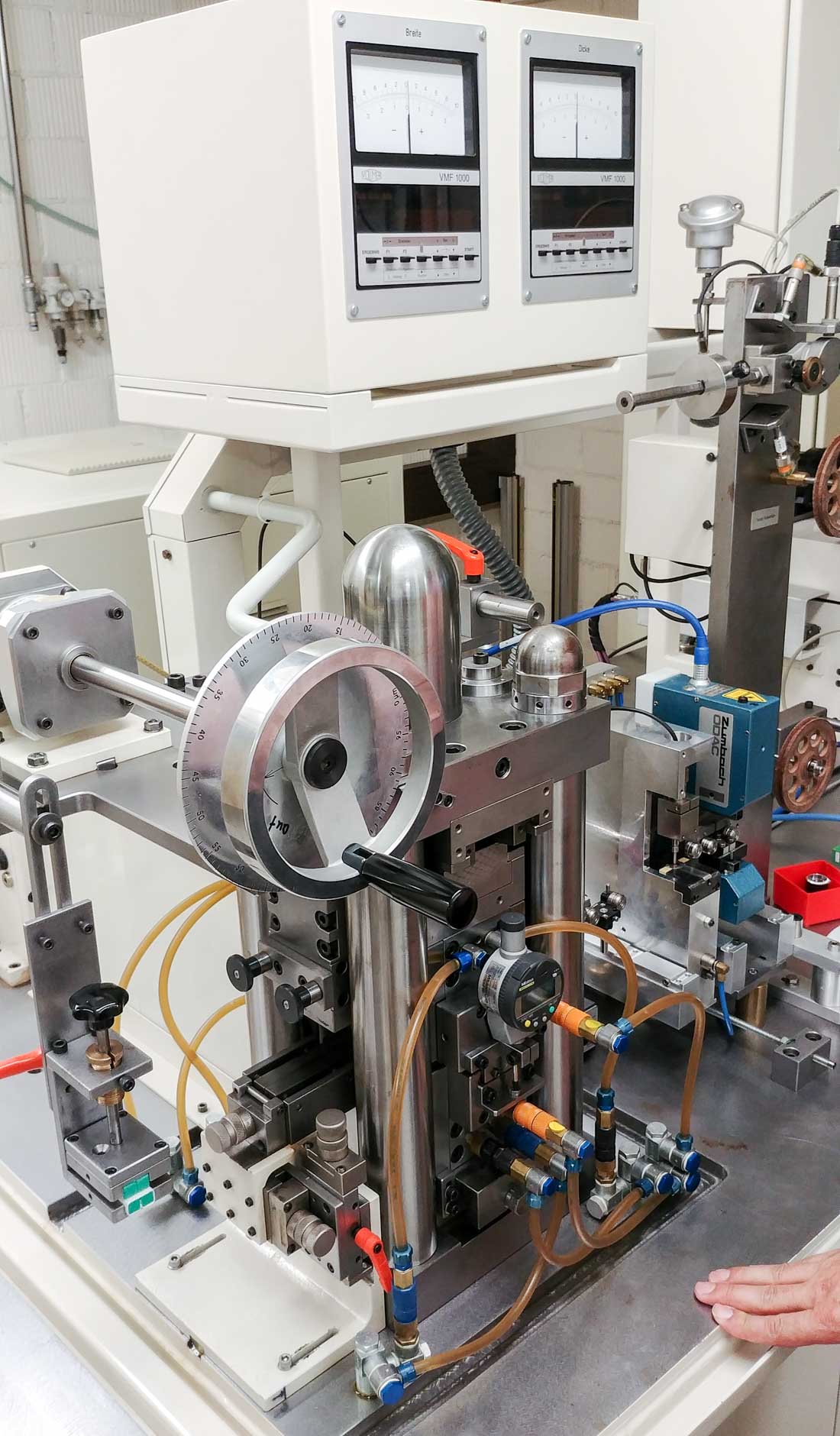 And what happens if the strict tolerances are not met? Will the world start to revolve backwards? Well, maybe not something quite so dramatic, but it might as well cause just as much headache: even a few microns (that’s a few thousandths of a millimeter) of deviation in the thickness of the hairspring will result in completely ruined chronometric performance – and if a finished hairspring is so poorly done, there is no watchmaker’s regulation-wizardry that could save it from the bin. 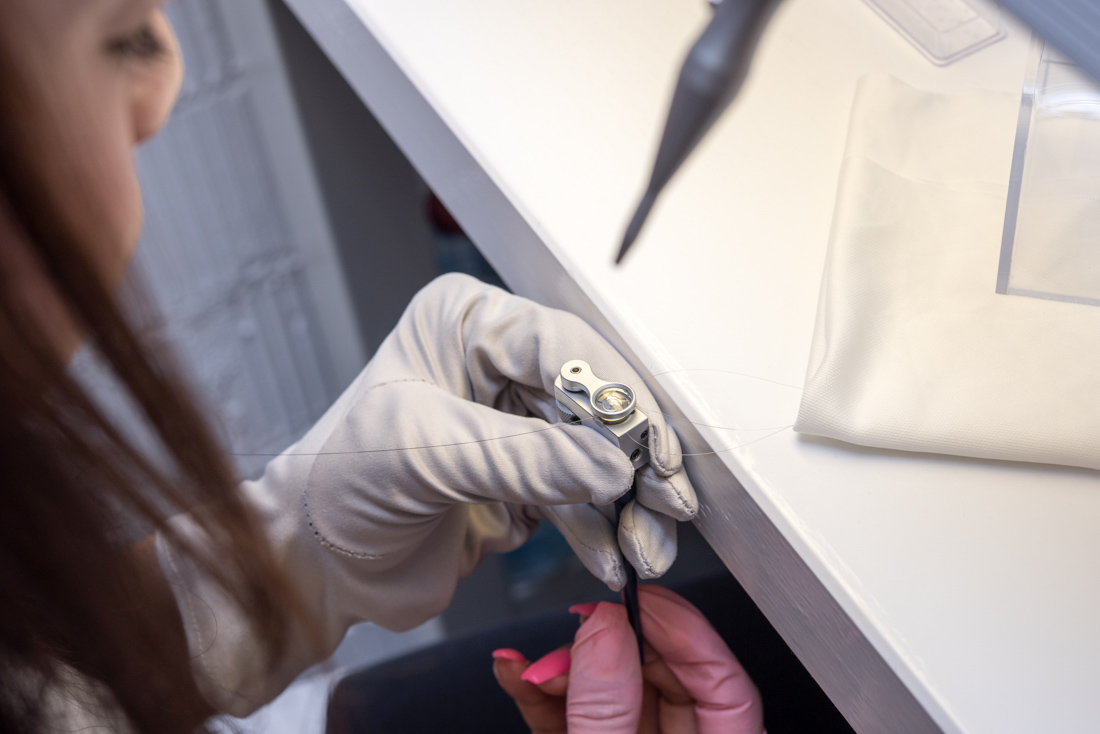 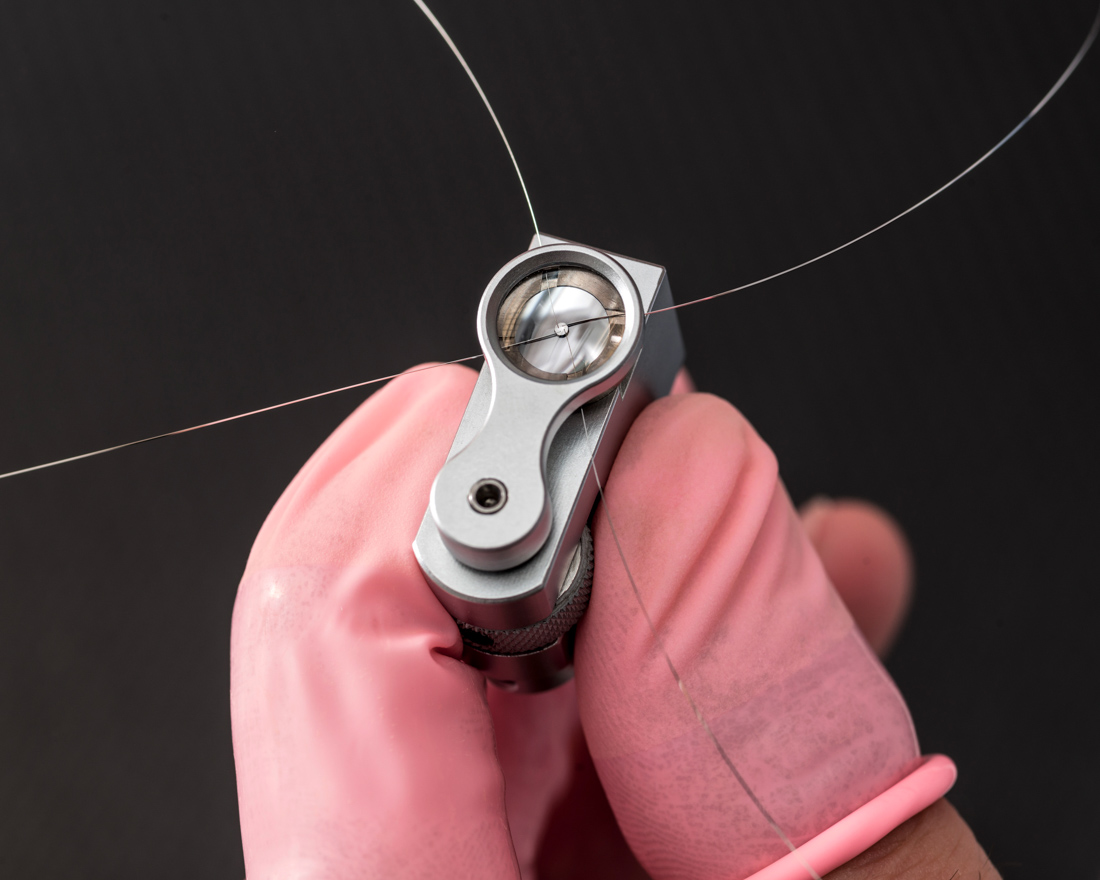 Once a full roll of hairspring material is finished and approved, it is finally ready to be worked on by a specialized craftsman of the manufacture. First, it needs to be cut to equal lengths and then fed into a little, handheld tool in groups of four. As shown directly above, this tool takes four springs, securely holds them at one end and then allows for the accurate rolling up of the springs through a spinning handle fixed to the center underneath. 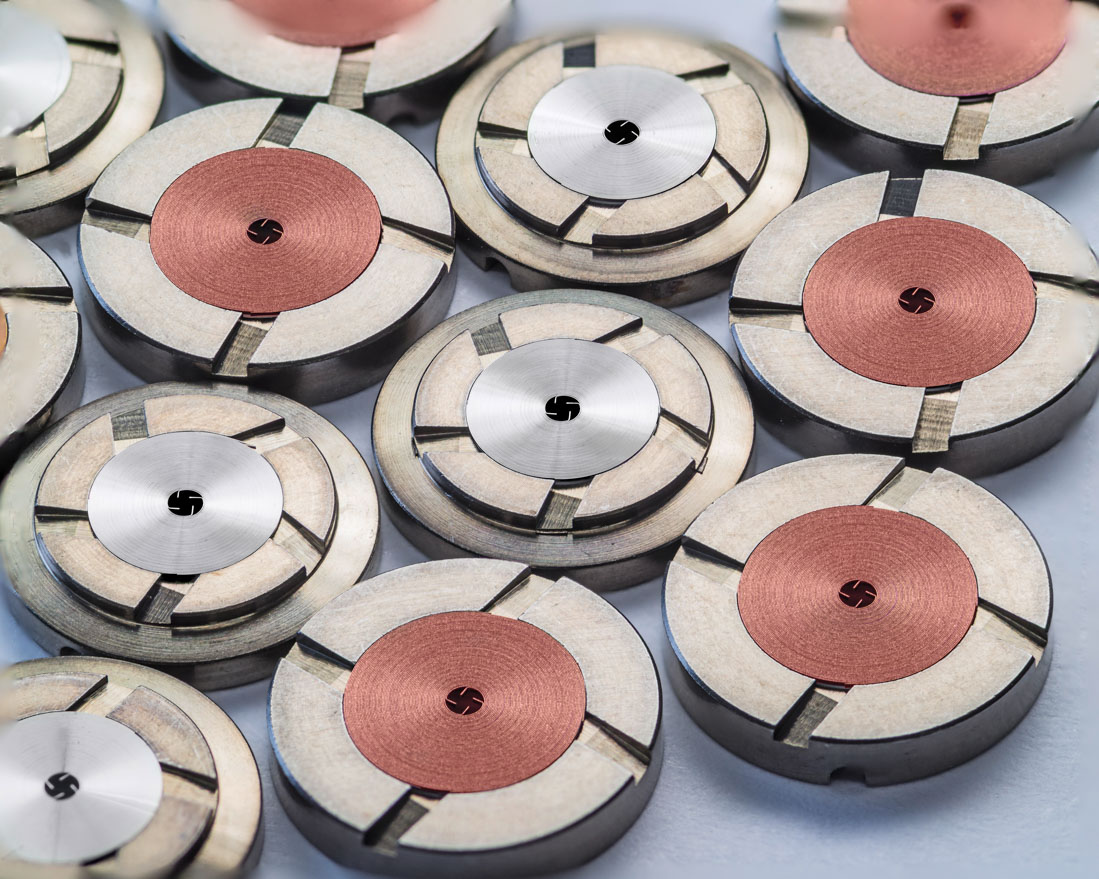 The end result of the process are small batches of four springs tied up tightly – the way of separating them is surprisingly simple, though. Stored in a transparent plastic container, all it takes are a few gentle hits to the underside of the container and the springs separate with ease, now ready for the next step. 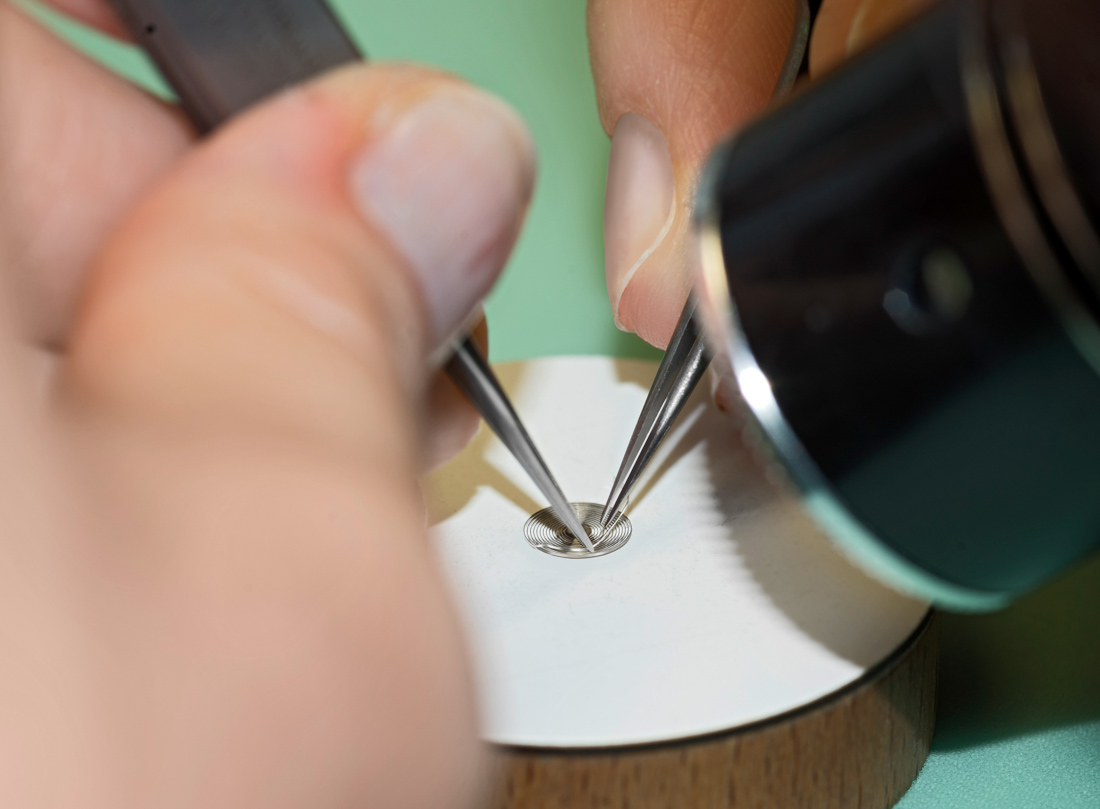 After a thermal treatment in a 10−6 vacuum at some 600 C° for about two hours, the springs are transferred to a workshop where they can be adjusted by hand. Moser Watch Holding’s Precision Engineering AG can manufacture all sorts of hair springs and that, of course, includes ones with Breguet overcoils. Because building and fine-tuning a machine to perform this task is only reasonable from manufacturing quantities of several hundred thousand – which is not met at this specialized manufacture that makes around fifty thousand hairsprings a year, as it supplies to a variety of other high-end brands beyond H. Moser & Cie. – the Breguet overcoil is actually crafted by hand. It is a process that can take up to 40 minutes to get right and, needless to say, requires a set of specially trained eyes and very steady hands. Last but not least, the hairspring’s collet (that small piece in the center) and stud (the one attached to the outer end) are fitted.

The finished hairspring remains the very key to mechanical watchmaking. At a time and age when highly accurate CNC machines and computer aided design help manufactures produce movement parts with rather great precision and efficiency, the hairspring remains the single most challenging-to-make component in 21st century watchmaking. To have this sort of manufacturing capacity and know-how part of the Moser Watch Holding and in fact the very same building where H. Moser & Cie. timepieces are made allows the manufacture to come up with a fair number of highly unique solutions.

For more about those, stay tuned for our next installment where we learn about five things that H. Moser & Cie. does in-house like few other watchmakers do – spoiler alert, producing a hairspring is among them. h-moser.com