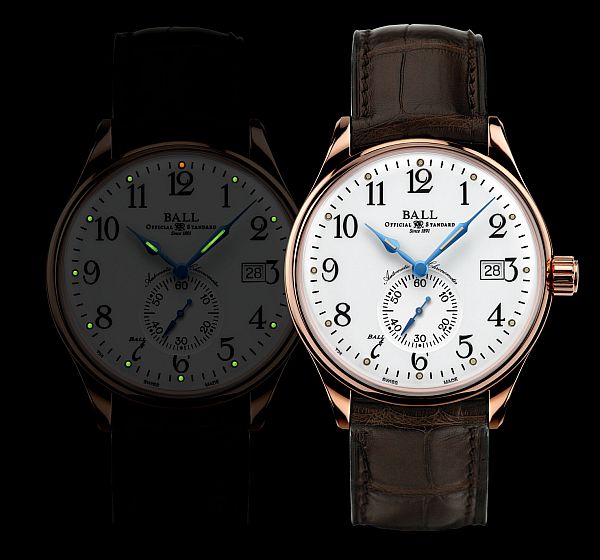 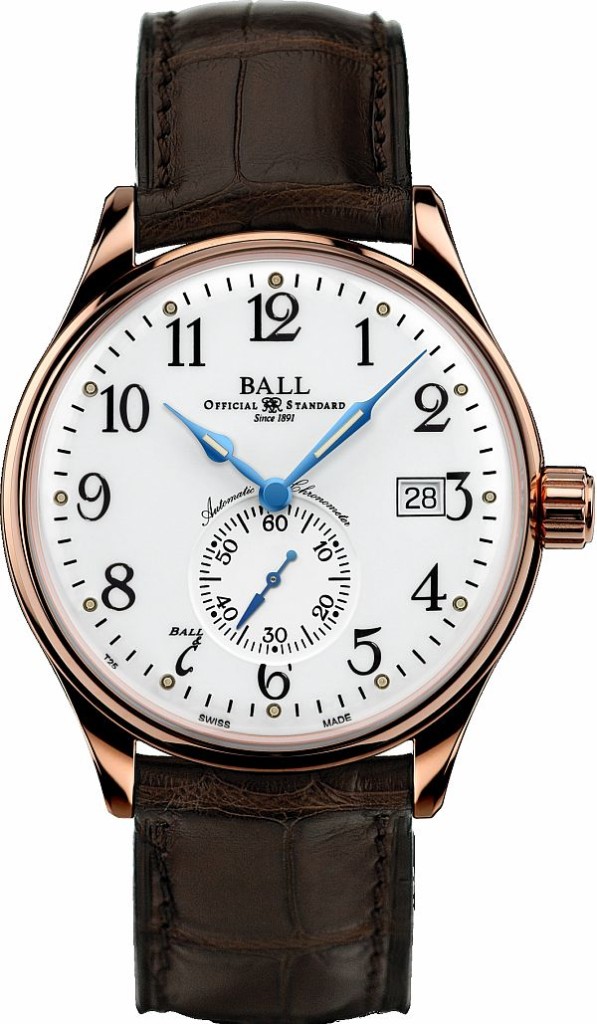 In addition to their fantastic sport watches, Ball Watches makes some cool dress pieces as well. The new Trainmaster Standard Time is an excellent example and comes with a very reasonable price in 18k rose gold. So why “Standard Time?” Today, we take our synchronized time for granted. Prior to 1883 however, that was something that didn’t exist. It’s been 130 years since the United States adopted Standard Time and the railroads consolidated 70 different time zones into the four we have today. It was also around that time that a jeweler by the name of Webster Clay Ball decided to utilize the signals emitted by the US Naval Observatory, setting the chronometers in his display window by the signal. This eventually led to Ball’s official involvement with the railroads, and brings us to the soon-to-be released watch that celebrates that 1883 milestone.

The watch in question is the Ball Trainmaster Standard Time, it’s no mystery how they arrived at that name. Presented in an 18k rose gold case, this Trainmaster is quite a beauty. The white enamel dial, with its stylized numerals and small seconds, definitely calls to mind (for me, at least) an earlier era in watches. However, the case itself measures in at just under 40mm (39.5mm, to be precise), and it houses Ball’s RR1105-C certified COSC movement, so this is truly a modern watch.

Of course, it wouldn’t be a Ball watch if we didn’t see some tritium on the piece. At first glance, you might think the only gas tubes showing up are on the blued hands. Which, if that’s all there were, would be a nice addition for a dressier piece like this, but it wouldn’t quite hold up to the standard of nighttime visibility that Ball has established. They’ve also incorporated the tritium lighting in the pips at each of the hour markers. This is something I’m really a fan of. Oftentimes with the tritium tubes, you’re limited to “chunkier” designs, given how the tubes are normally oriented. Here, with the Trainmaster Standard Time, Ball created a great way to include the illumination while preserving the dress style of the piece (and it’s something that’s present in all of the Trainmaster lineup).

While this particular watch doesn’t look like it’s as robust as some of their other models, Ball has built it in a way that should allow it to handle just about anything you’d throw at this watch – or at least activities you’d have a watch of this style paired to. It carries a water resistance rating of 100m, and it’s shock resistant to a limit of 5,000 Gs. Combine that with the convex sapphire crystals front and back, and you’ve got a durable watch ready for your day-to-day activities.

The Trainmaster Standard Time is anticipated to be available in December 2013 at an MSRP of $7,699. I’ve admired a variety of different Ball watches over the years, and I think this Trainmaster might have just become my new favorite from their lineup. While the styling may not be as bold as others from Ball, I think this is a watch that will work well for many folks, especially if they are looking for something a bit more subtle. For me, there’s just something about the juxtaposition of classic styling and tritium tubes that I find alluring here, and this piece looks like a winner to my eyes.  ballwatch.com