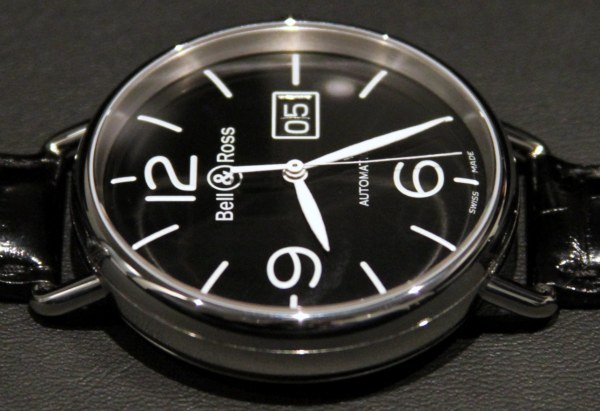 As Bell & Ross retreats into the history of timepieces to create more “vintage, original, and heritage” timepieces, we see an increasingly interesting range of retro designs as only Bell & Ross can do it. This year Bell & Ross has gone all the way back to the origins of the wrist watch with the “WW1.” The name means “wrist watch 1,” but not so ironically sounds like world war I. This is the era when wrist watches really began – so the name sort of has a double meaning.

The WW1 is a different feeling Bell & Ross, and treads into new territory. The concept of the piece is based on how some of the first wrist watches were modified pocket watches. To compound this idea, Bell & Ross has also released a pocket watch version called the PW1. The pocket watch won’t sell as well as the wrist watch, but is a good visual reminder of how you are meant to think of both pocket watch and wrist watch when looking at the WW1. 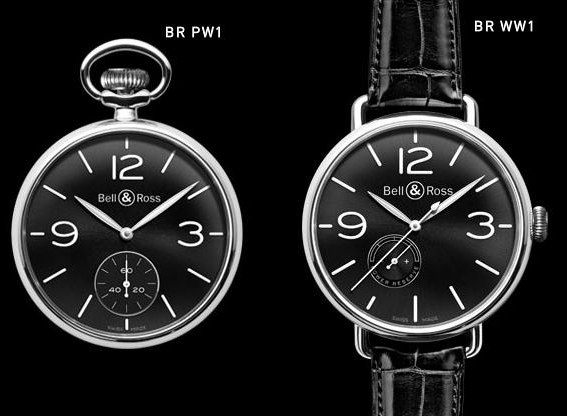 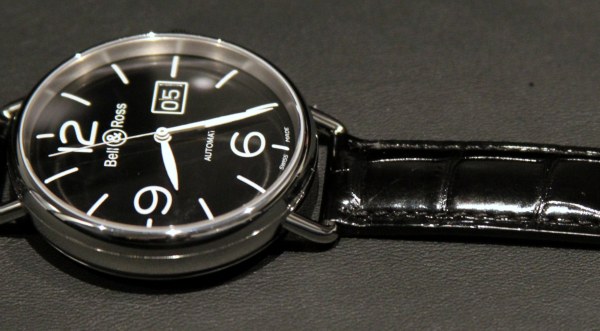 Like a pocket watch the case is very rounded and pebble-like. This causes it feels less dense than much of what Bell & Ross offers. The steel case is polished all over and curved with a matching curved sapphire crystal. Lugs are done in the style of those that were once melted to the sides of pocket watches to make them wrist watches. Bell & Ross takes pride in this aspect of the watch and I think they did a good job with it – better than Panerai on their Radiomir and retro models. One cool aspect is that it is not a solid bar, but rather looks like one. The middle section is actually a spring bar – this makes changing straps much easier than if you needed to unscrew the bar. 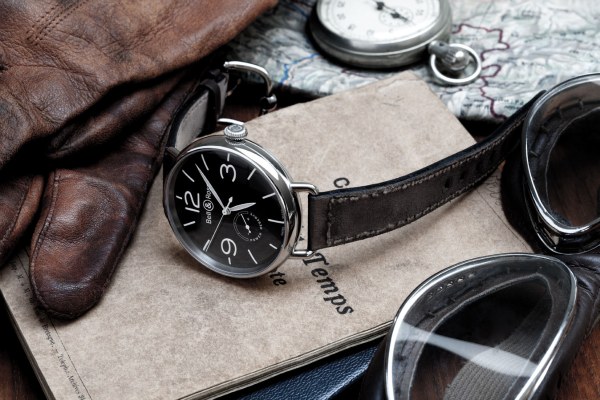 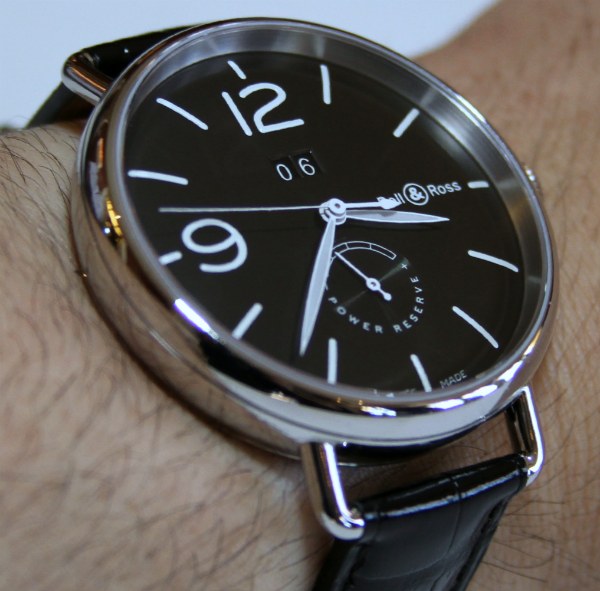 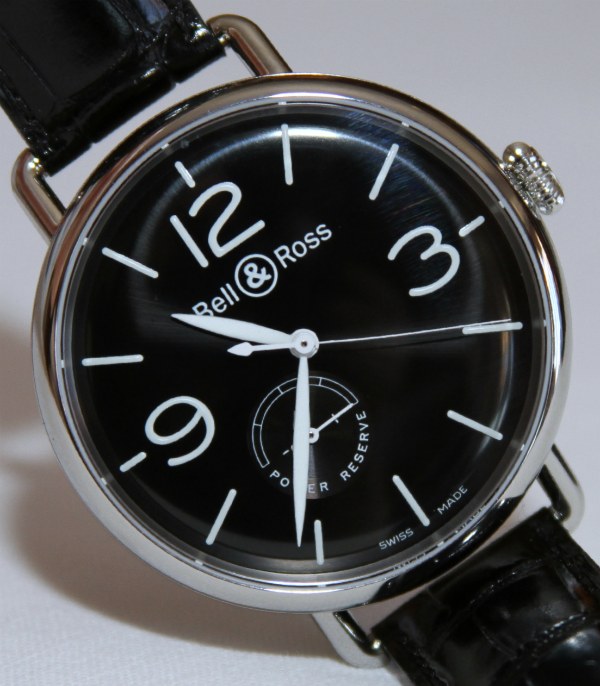 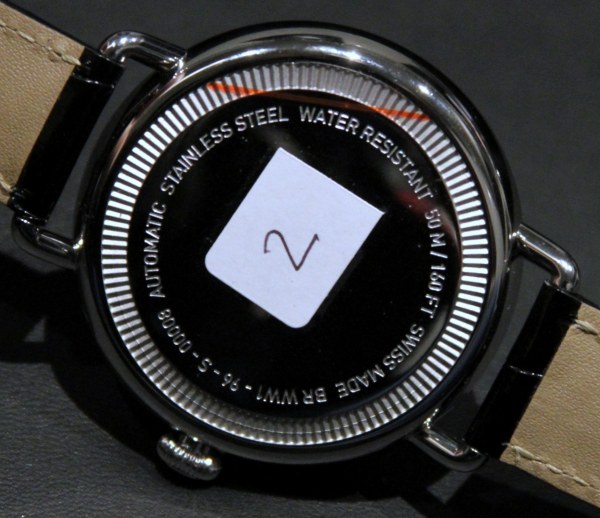 Overall the case is very slick looking, but it would take a bit for me to get used to it. In a sense, this is of the most minimalist designs that Bell & Ross has ever offered.  This is also not a sport watch. Bell & Ross placed the piece on an alligator strap, and with 50 meters of water resistance – the case isn’t that durable. Size of the watch is a neat 45mm wide, though it wears smaller due to the short lugs.

For the dial Bell & Ross really excels again offering that early 20th century period look along with an easy to read face. The iconic Bell & Ross dial is present with thinner indexes and new hands. How many dial styles will there be? Not sure right now, but there will be a few. Like the BR01 when it first came out, there ought to be a few models of the WW1 containing ETA’s core 289X series automatic movements. Here you see one with a 2896 (big date) and another with a 2897 (power reserve). This makes me think that Bell & Ross will also have the more basic 2892 model, as well as perhaps others. I actually think a version with a 2895 would look nice (subsidiary seconds dial), as opposed to having the large central seconds hand. UPDATE: The WW1 will come in three styles initially They will have either an ETA 2896, 2897, or 2890. Another version will be released later with a totally different dial and will contain a 2892. 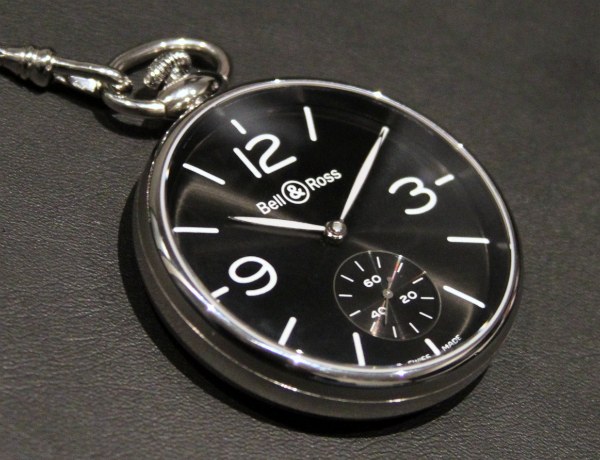 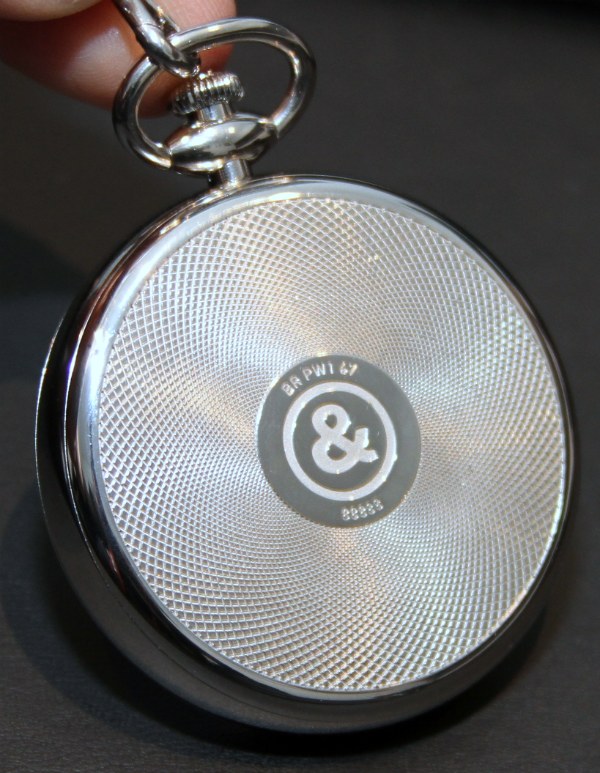 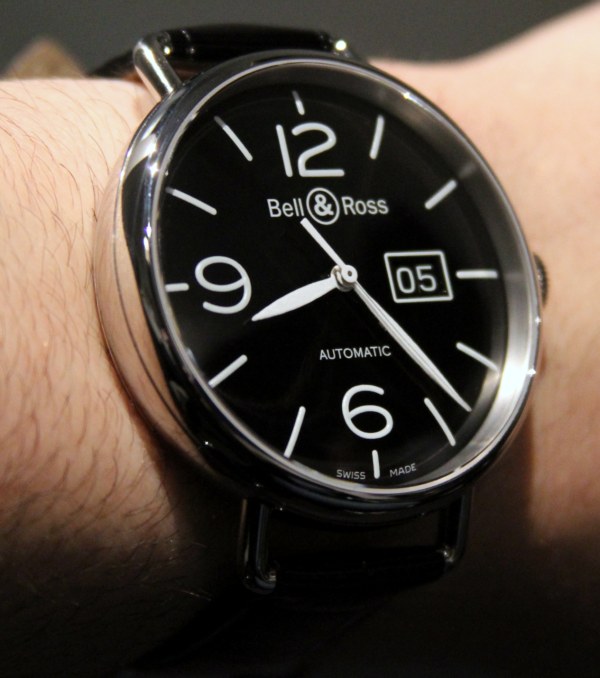 The PW1 pocket watch is larger at 49mm wide and comes complete with a chain. The dial is polished differently with a sunburst style, and the caseback is machine engraved. Inside of the pocket watch is a Swiss ETA manually wound 6974 movement. Both the WW1 and PW1 are interesting models, but Bell & Ross has traveled so far back they no longer have any place to go with these retro models. Does this mean we start to look forward again next year? Or perhaps the vintage style collections will examine themselves and history even more as Bell & Ross adds the brand’s lineup. Prices for the wrist and pocket watch are $4,500. UPDATE: Bell & Ross decided to amend the pricing on the pocket watch version to $3,000. They did this for a special reason to help promote the pocket watch despite the reduction in revenue of its sales. This has a lot to do with the CEO’s big personal interest in pocket watches these days – wanting that DNA to be part of what Bell & Ross is all about.