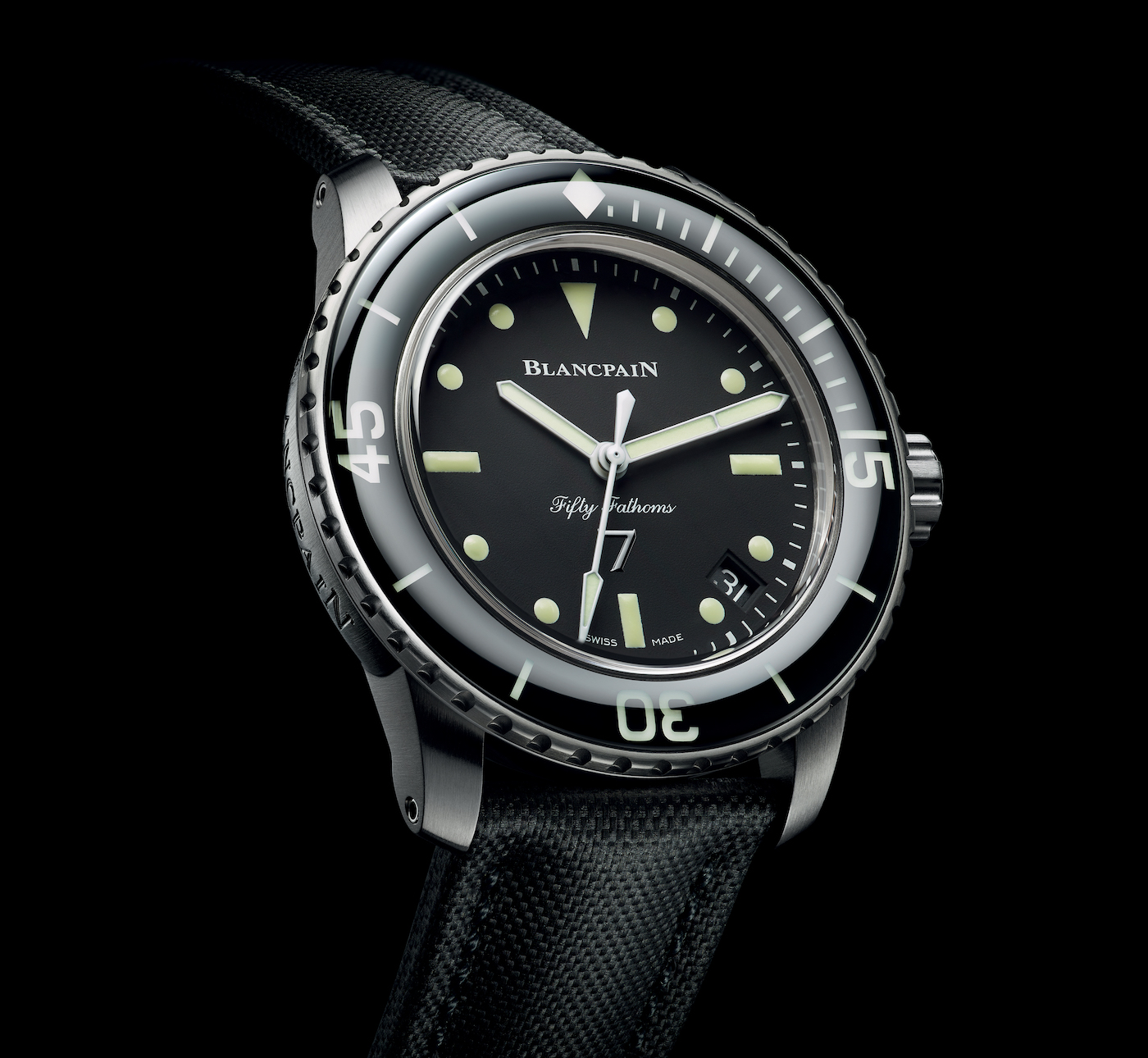 In a rush of exciting new releases, Blancpain has expanded the Fifty Fathoms range even further. This one, the Blancpain Fifty Fathoms Naguers De Combat Watch, is based heavily on the earliest models in this collection dating from 1953. Here we have a very pared back imagining of the Fifty Fathoms design DNA. The stainless steel case measures 45mm with a nicely decorated closed caseback, showing an anchor that has been mounted by two kissing seahorses with wings. Because why not? Who doesn’t like watching winged seahorses kiss? 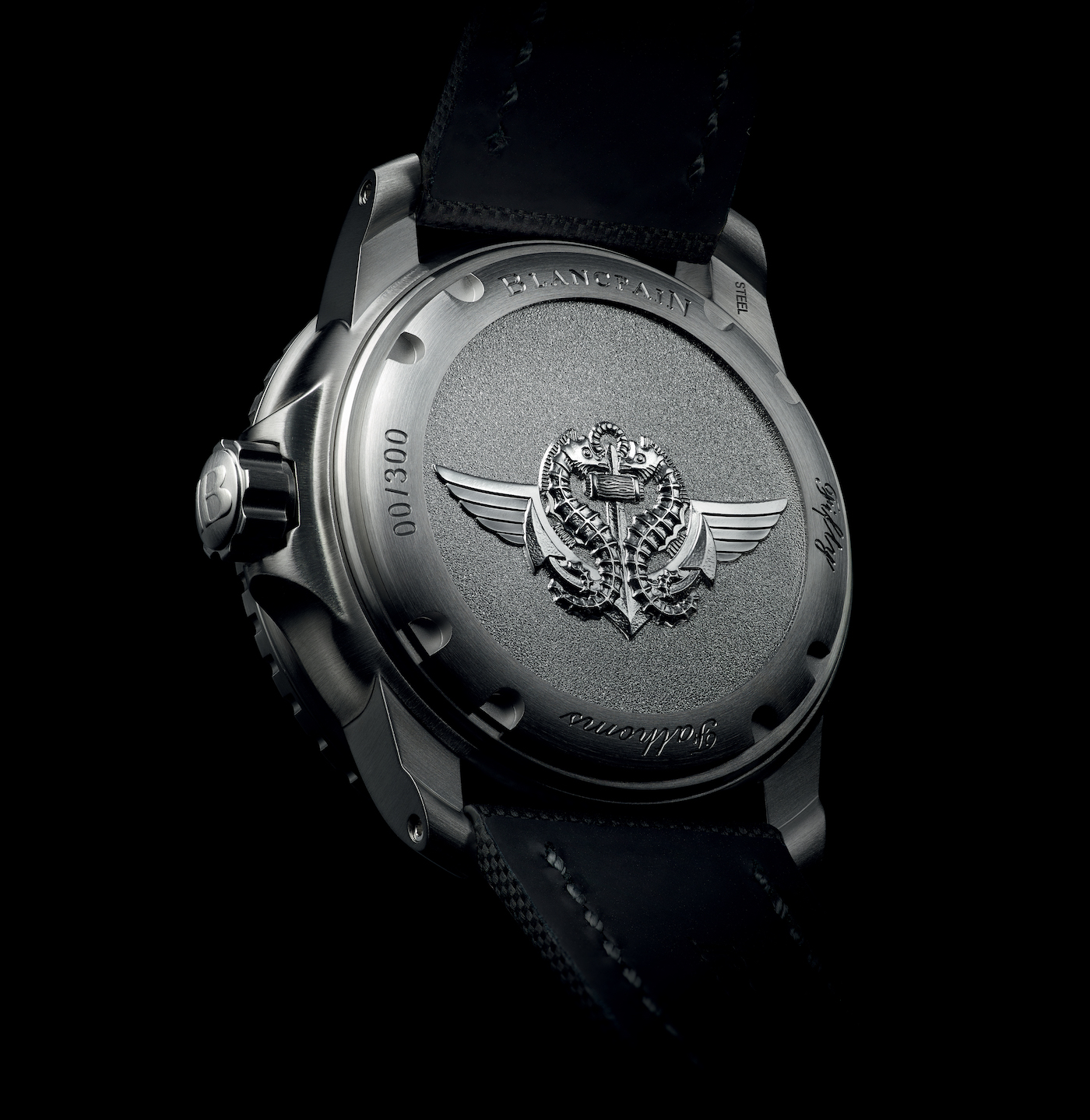 But I jest. The seahorses aren’t actually smooching. (I believe they are just colleagues.) They are, in fact, part of a very special emblem that Blancpain had to obtain permission from the French military to use. The caseback image is, in fact, the Combat Diver Qualification Badge awarded to divers when they pass their training. The anchor represents the sailors, and the winged seahorses represent the underwater world and parachutists. 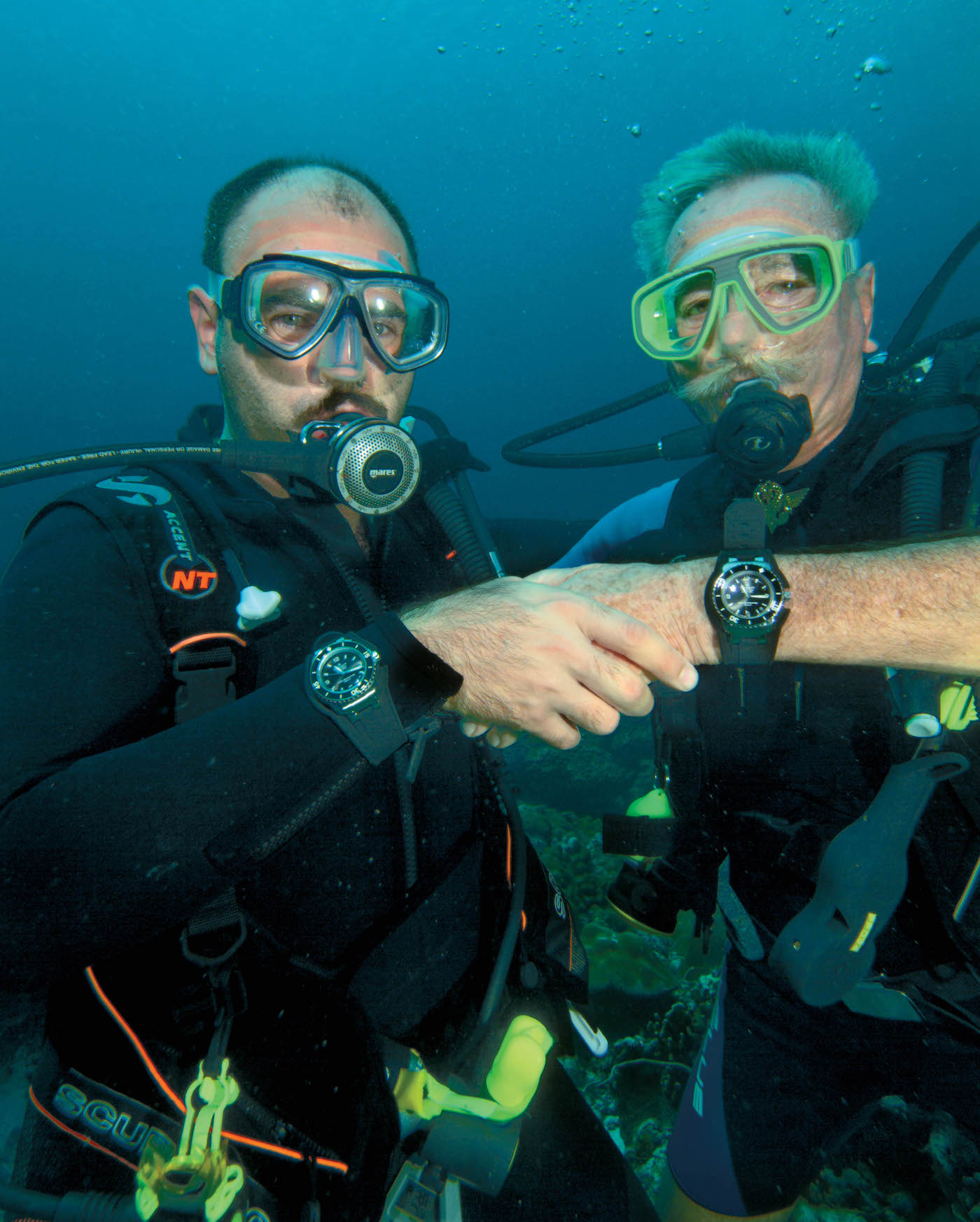 It’s a fitting homage for a watch that was one of the very first proper dive watches in the world. And for that, we have Blancpain’s former leader Jean-Jaques Fiechter to thank. When he took over the reins of the company in 1950, he set about creating the perfect diving companion for himself (as he was a keen submariner). Using his personal knowledge, he started drawing up the specifications that all dive watches should meet: luminous hands and hour markers set against a dark dial, a rotating timing bezel, an automatic movement, impressive water-resistance, and an antimagnetic case. These are things that have become commonplace in our definition of a dive watch, as per ISO 6425, but in those days all he had for reference was a blank sheet of paper. 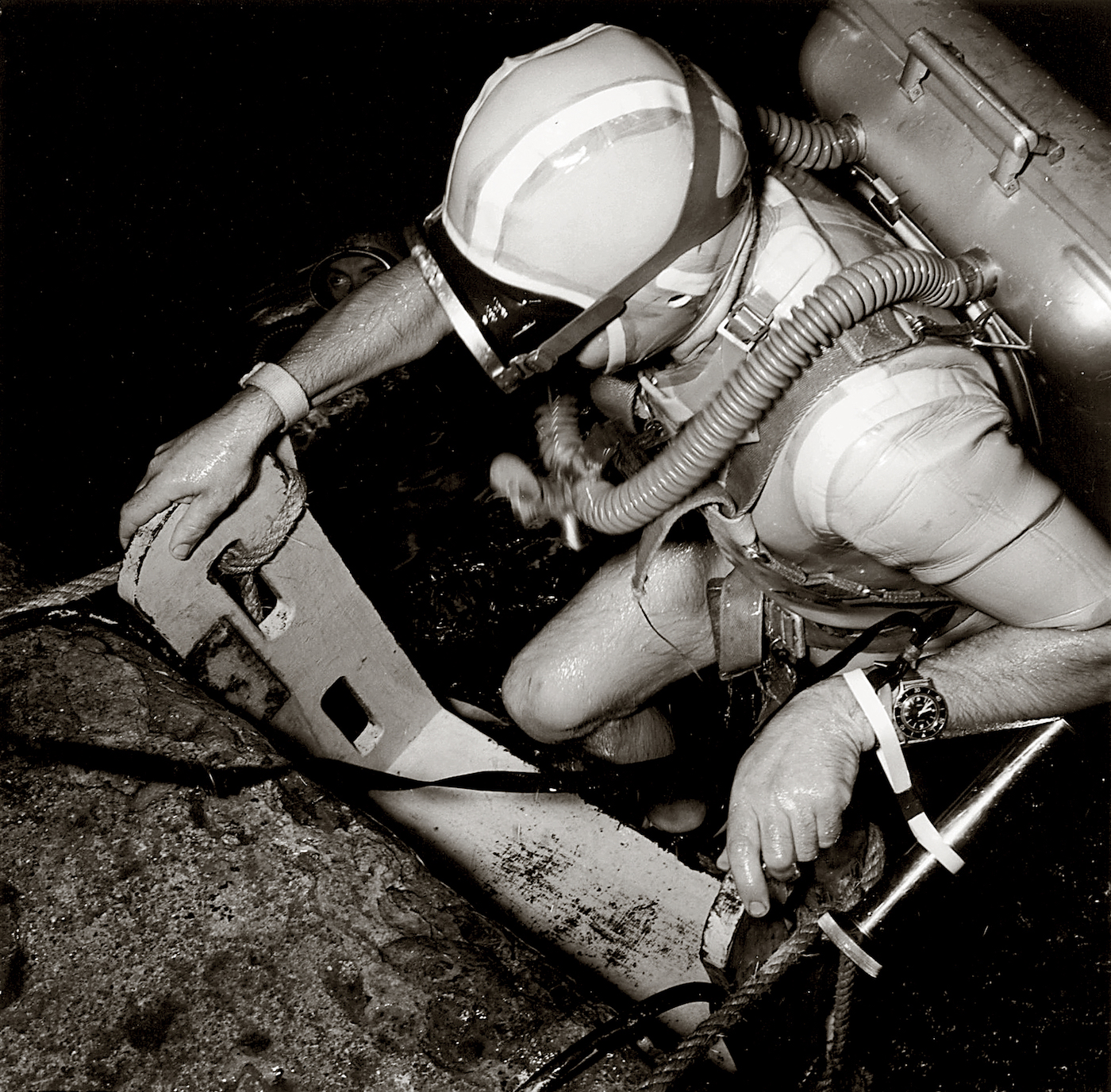 He was not alone, however. When Captain Robert “Bob” Maloubier and Lieutenant Claude Riffaud, founders of the newly formed French Combat Swimmers unit, contacted Fiechter in 1952 in search of a perfect watch for their underwater endeavors, a perfect partnership was formed. The newly minted unit worked together to bring the Blancpain Fifty Fathoms to life. 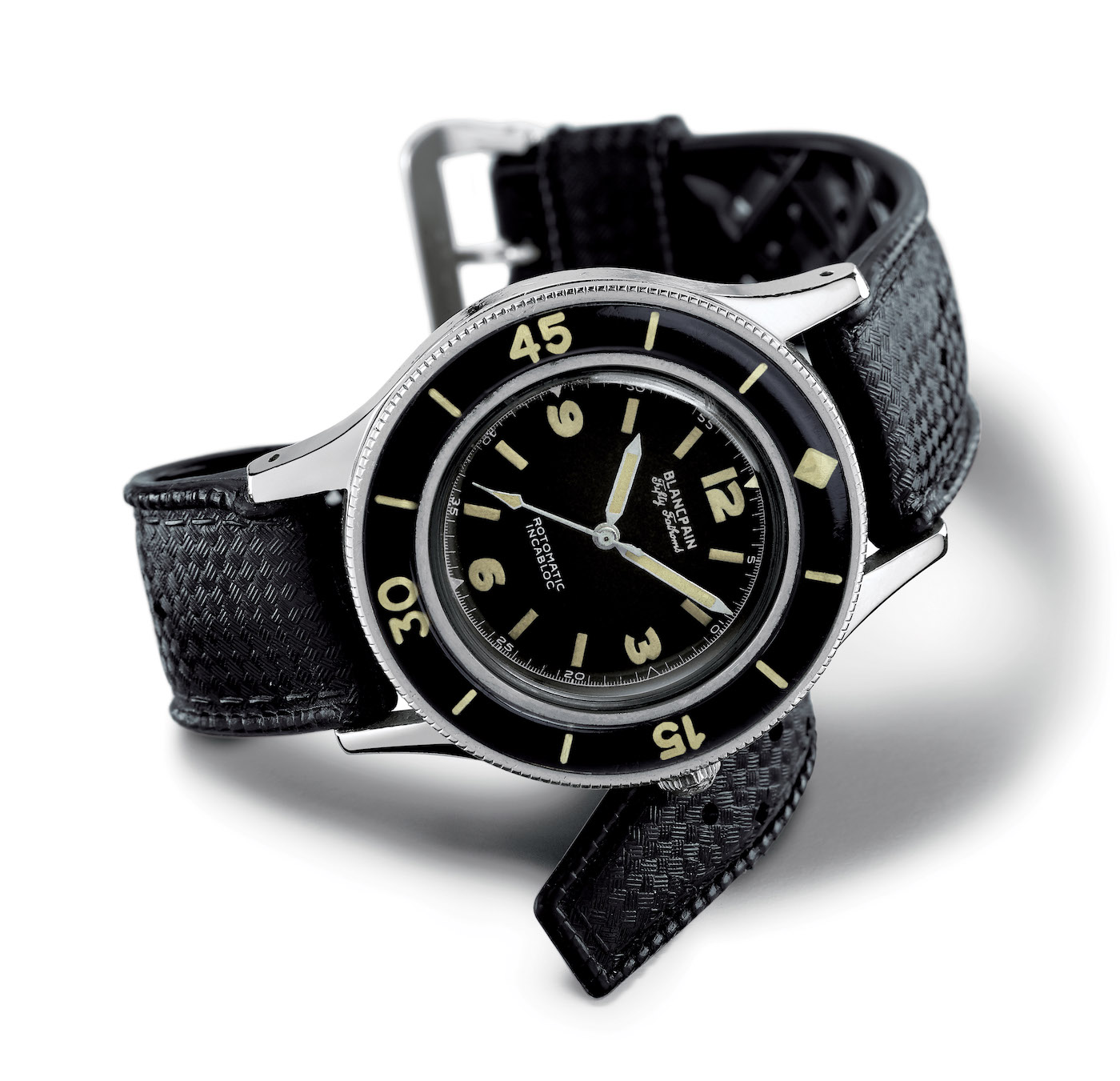 One of the early Blancpain Fifty Fathoms

In 1953, their brainchild saw the light. The Fifty Fathoms became an indispensable piece of kit for the French Combat Swimmers corps. To further link this celebratory model to the world of the men it is honoring, the watch dial hides a discreet tribute above the 6 o’clock marker. There, printed on the dial, is the number seven. Seven is a significant number for divers, because oxygen becomes toxic when its partial pressure reaches 1.7 bar. That means the deepest a frogman can go while using pure oxygen is seven meters, and thus that number has become engrained in the minds of divers the world over. 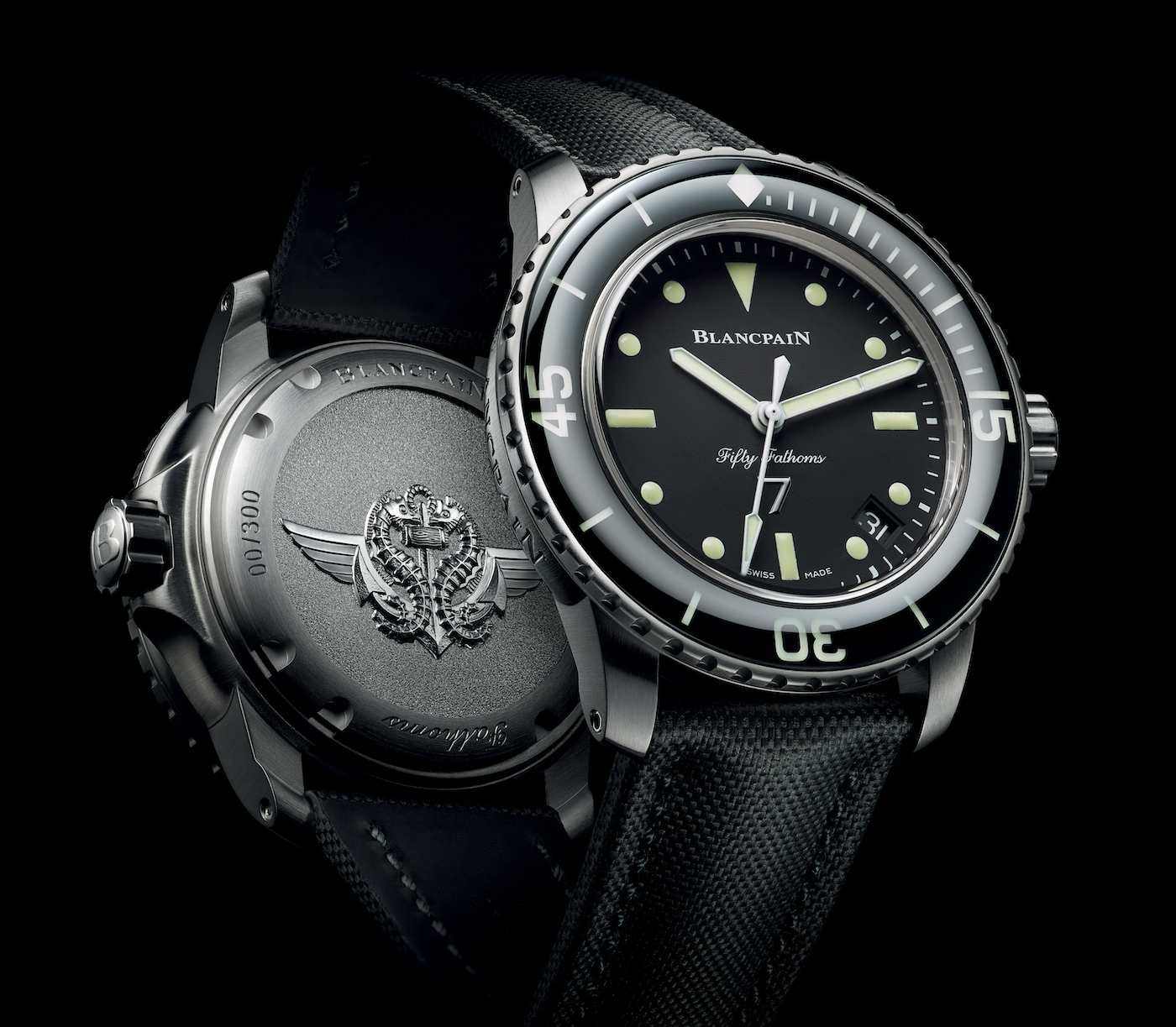 The watch is powered by the caliber 1315 automatic movement. The movement functions include the hours, minutes, seconds, and date (located neatly between 4 and 5 o’clock on the dial). The 1315 also features an antimagnetic silicon hairspring, and, most impressively, three sequential barrels offering a massive power reserve of 120 hours (5 days). One last vintage flourish is the hands, which are painted white to match the popular styling of the early dive watches of the 1950s. Learn more at blancpain.com.