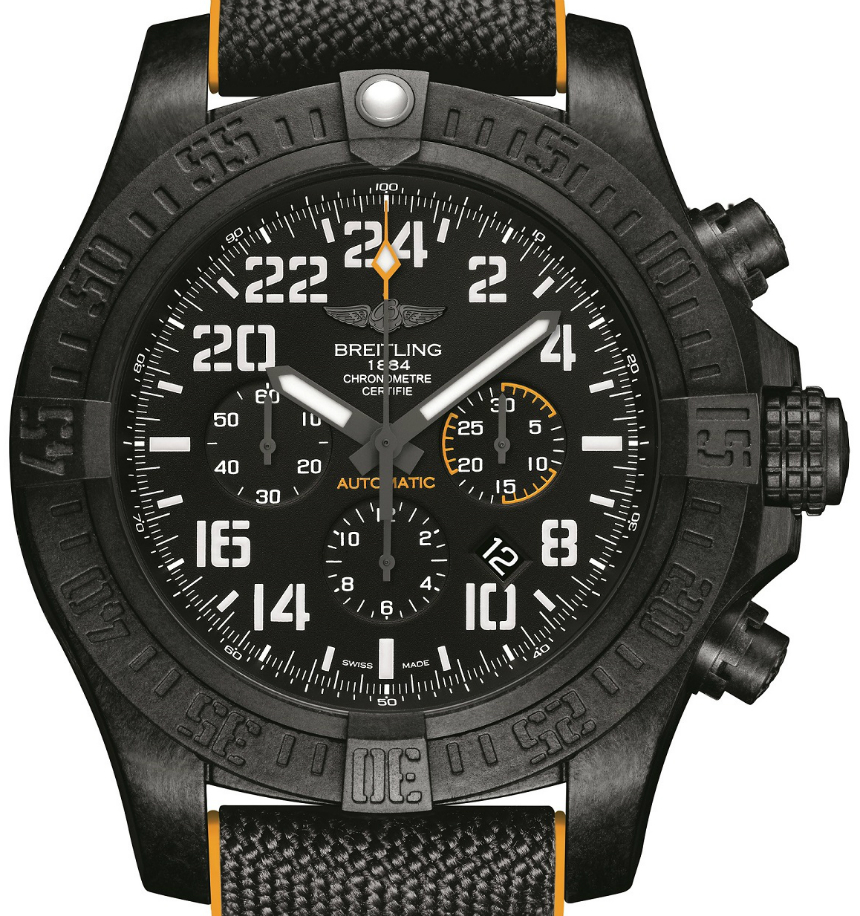 You’ve just gotta hand it to Breitling. Sometimes awesome, sometimes baffling, but never lacking confidence, it’s clear that the independent brand is comfortable sticking to its guns by delivering watches big on personality – like the new Breitling Avenger Hurricane. An unapologetic beast of a watch that comes on the heels of the release of the Breitling Avenger Bandit, the Hurricane encapsulates every macho superlative that’s ever described the brand in a singular design hewn from an all-new proprietary ultralight polymer called “Breitlight.” 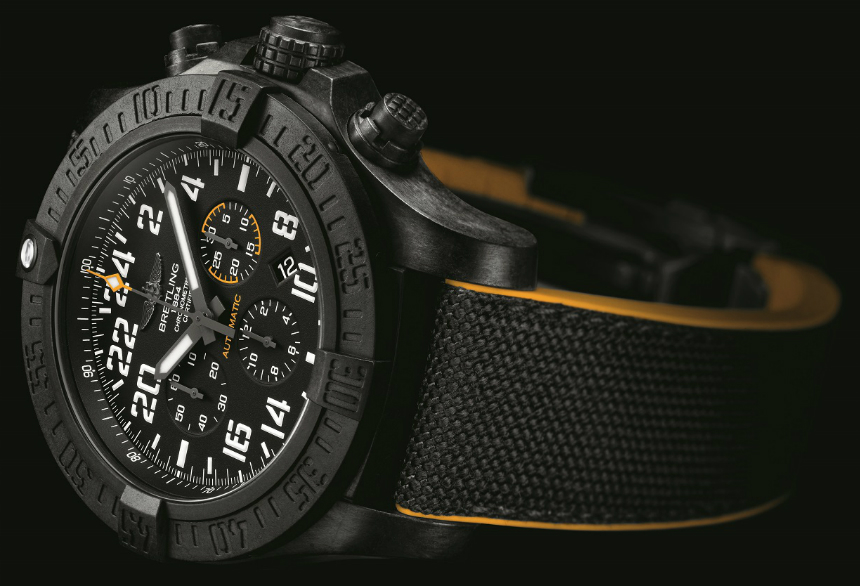 Eagle-eyed Breitling fans might recognize a few familiarities between the Breitling Avenger Hurricane and 2014’s Super Avenger Military Limited – especially given the watch’s 3-6-9 chronograph layout and unique military-style 24-hour display. However, the Breitling Avenger Hurricane’s most dramatic differences lie in its significantly larger case – a 50mm roundhouse kick to your ulna that, while unashamed of its steroid use, is actually lighter than the Super Avenger Military that inspired it. These extraordinary weight savings come from the Breitlight case – a material Breitling was quick to point out is not carbon fiber, but rather a completely new, and Breitling-exclusive case material utilizing a lightweight high-tech polymer that’s been charged with composite fibers for strength and rigidity. It’s over three times lighter than titanium and nearly six times lighter than steel, and while its lightness relative to carbon fiber would have to be largely speculative at this point, it’s probably safe to assume that a forged carbon watch of similar proportions would also be of similar heft. 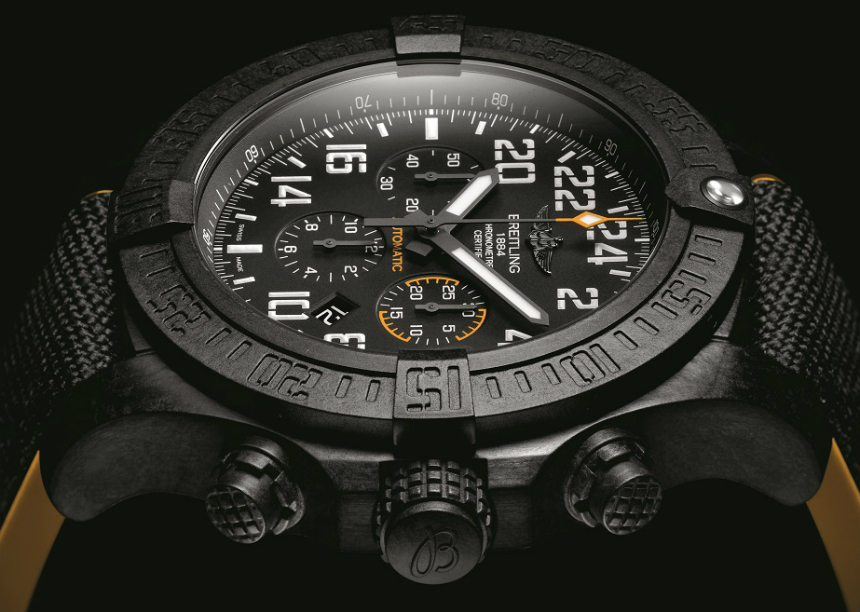 But the weight savings aren’t the only advantage to Breitlight. The subtly textured composite is also naturally anti-magnetic, hypoallergenic, and is largely impervious to corrosion or scratches – lending a semi-permanent degree of protection unmatched by even DLC, making it a perfect long-term match for Breitling’s signature military design aesthetic. 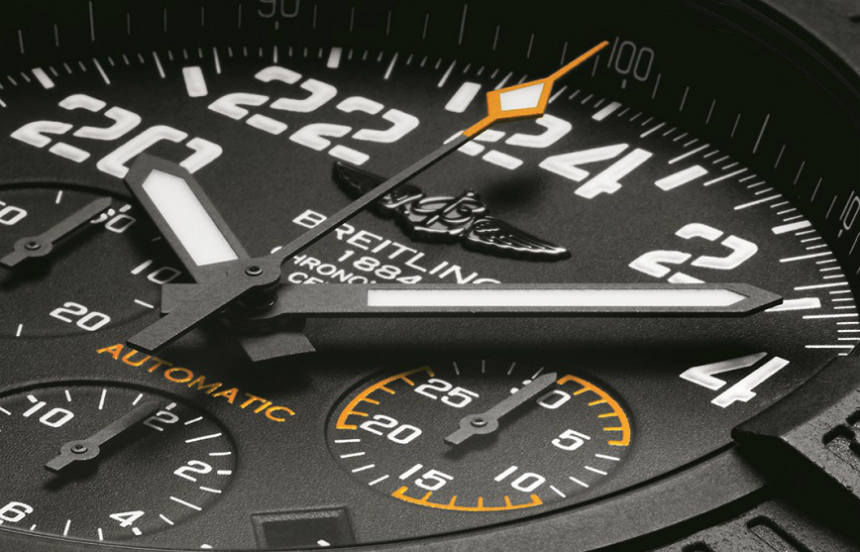 Beneath all that not-carbon-fiber beats the Breitling B12 – an in-house automatic chronograph movement characterized by 30-minute and 12-hour totalizers, and backed by a generous 70-hour power reserve. The B12 has a great deal in common with Breitling’s B01 caliber, but has a military-style 24-hour display instead of the standard 12, which is undeniably cool. It’s worth pointing out that there are very few brands producing watches with 24-hour movements, and even fewer actually producing those movements in-house, a fact that puts the B12 in some pretty rare airspace. And like the rest of Breitling’s in-house calibers, the COSC-certified B12 hums along at a familiar 28,800 vph — or 4Hz, which Breitling has deemed the optimal frequency for ensuring long-term stability and reliability for its chronograph movements. 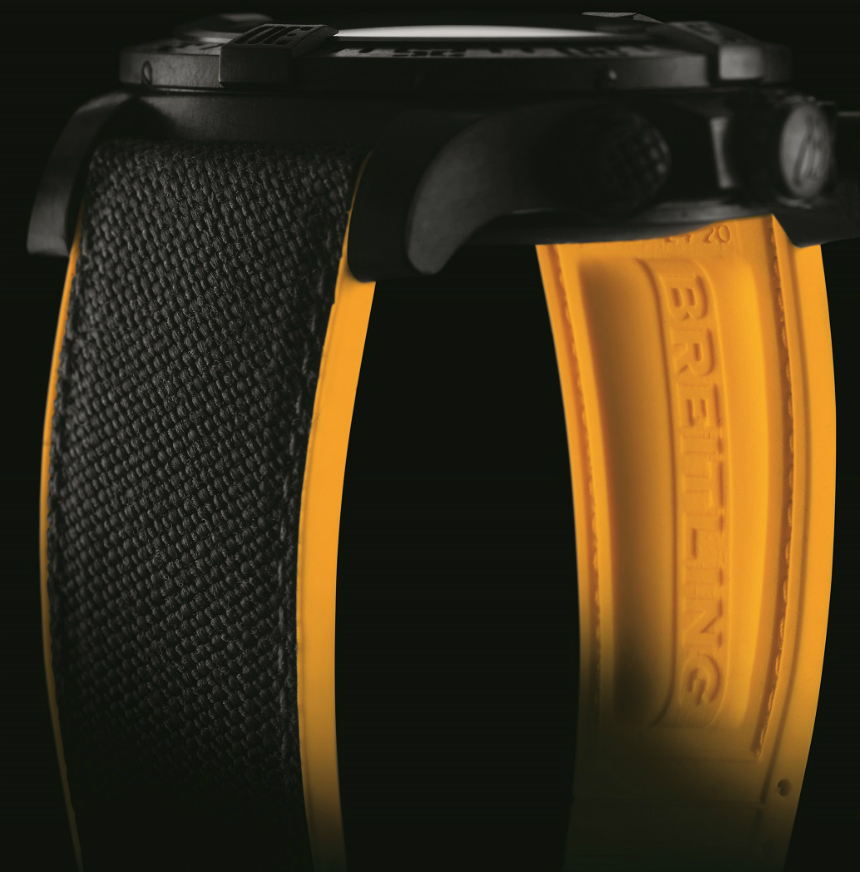 Sitting alongside the rest of its “tacticool” Avenger cousins, it’s clear the Breitling Avenger Hurricane is targeted squarely at the helm of a multi-disciplinary fleet of military-type watches with land, sea, and air competency. Starting with 100 meters of water resistance, all the other Avenger design signatures are here; like the stenciled arabic dial, aggressively knurled screw-down crown, and a uni-directional diver-type Breitlight bezel with Breitling’s grippy rider tabs for easy manipulation with gloves. The watch is finished with a woven textile strap stitched atop a contrasting yellow rubber core, which neatly matches the yellow accents on the dial. 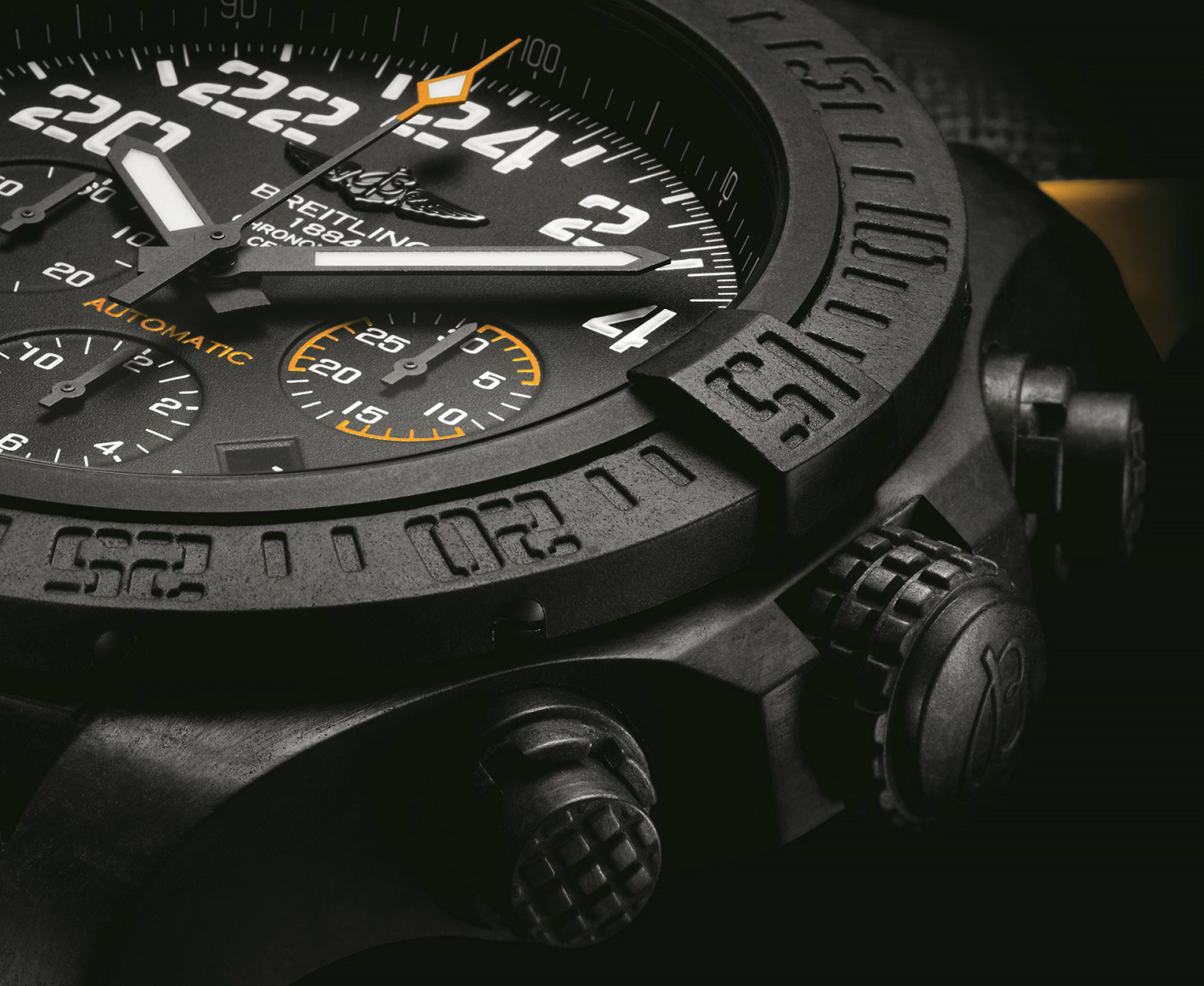 The Breitling Avenger Hurricane will undoubtedly attract a fair amount of attention for its liberal proportions, but if its exaggerated, military-inspired design language speaks to you – and if you’ve got the wrist of a Nordic powerlifter and the confidence of a supervillain in a future Expendables sequel, this could very well be the watch for you. Price for this watch is $8,390. breitling.com