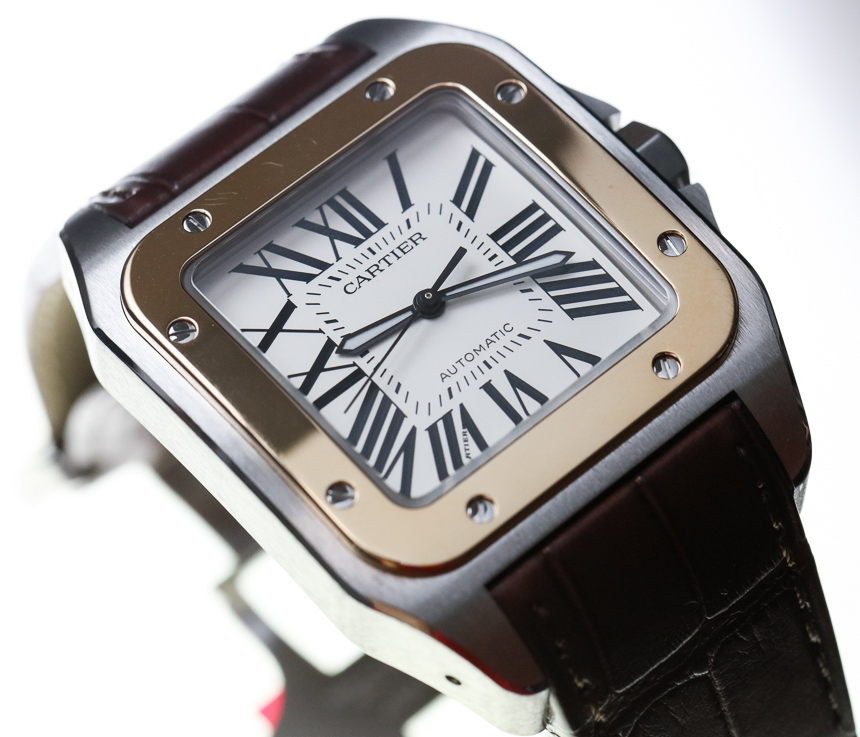 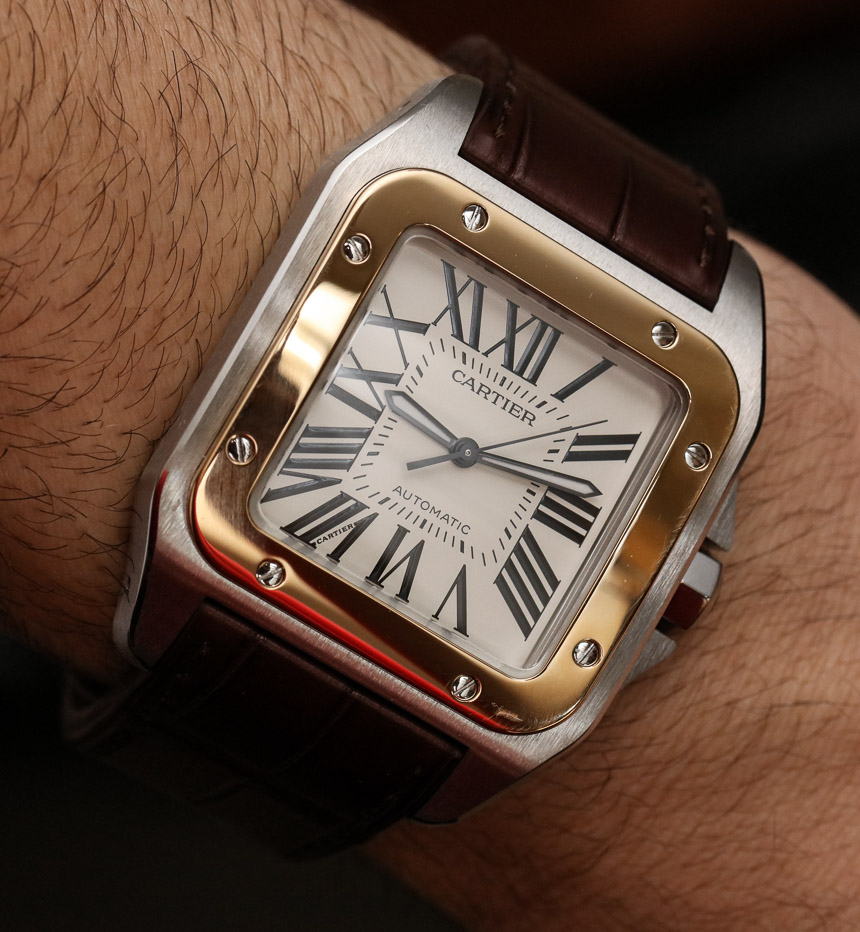 In my years reviewing Cartier timepieces, I’ve mostly chosen round watches. In fact, most people who buy watches choose ones with round cases. I say this because reviewing the Cartier Santos 100 watch was a bit left-field for me. Nevertheless, it is a decision I am happy that I made because this is a timepiece with a huge amount of wrist-appeal once you actually put it on.

Some of the most iconic watches around have non-round cases, but these timepieces are admittedly rare. How many truly “iconic” square or rectangular watches are even out there? Truly, there are a scant few… and for whatever reason, most of them are produced by Cartier (with exceptions such as the Jaeger-LeCoultre Reverso and the Bell & Ross BR01). Cartier produces its large variety of Tank collection watches which have rectangular cases, but its only true square-shaped watches are in the Santos family that includes both the Santos-Dumont models, as well as the Cartier Santos 100 models, such as the one I am reviewing today. 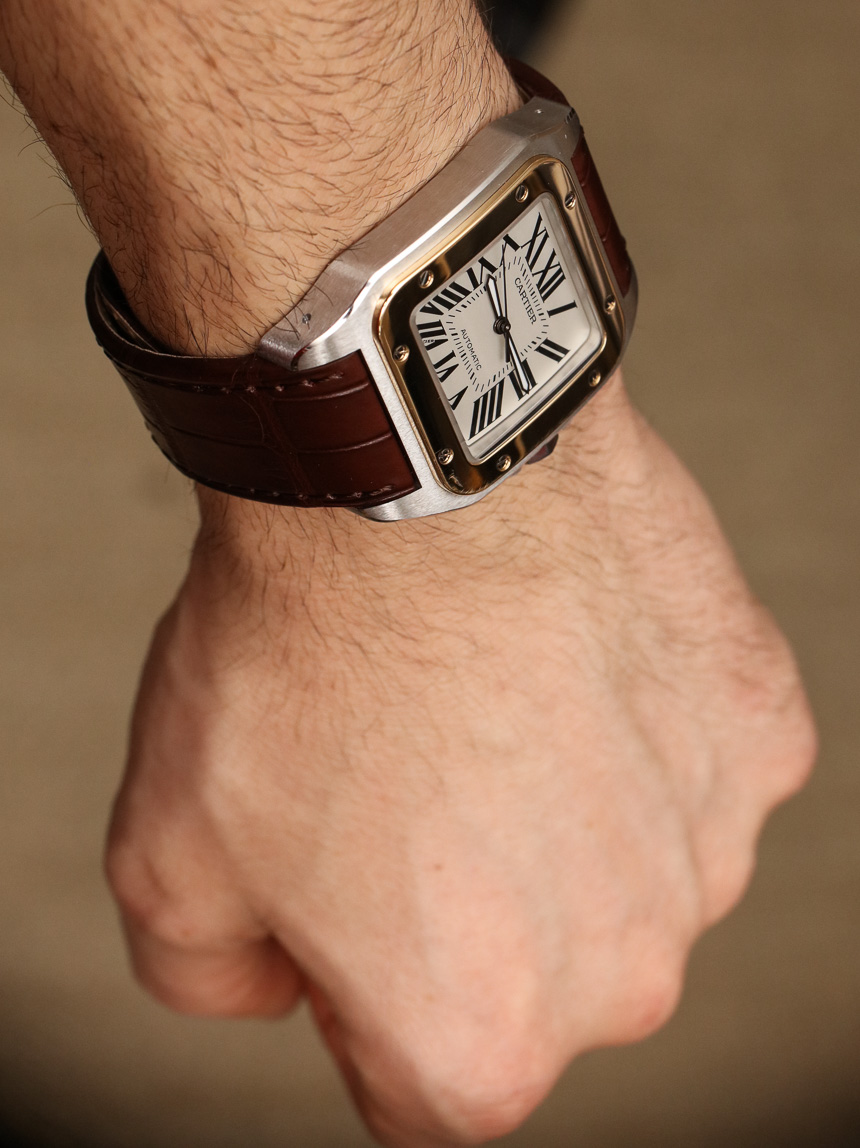 One of the reasons that square watches typically don’t work on wrists is the inherent battle between the more organic curves on one’s wrist and the mathematical angularity of square watches. Put these things together, and you often have a result that is not harmonious. This is important to think about because it means that a square or rectangular watch that looks good in a picture, might not be as flattering when put on your wrist. Round watches tend to fare much better when it comes to the “on-the-wrist test.”

The above trend isn’t a rule, however, and the right square or rectangular watches can look fantastic. The Cartier Santos collection is among them, and why it works on the wrist is difficult to explain. Like many aesthetics that work well, the brain doesn’t always translate well what the eyes perceive. I’ve spent days looking at the Cartier Santos 100 on my wrist trying to consider “why this square watch works while others don’t?” 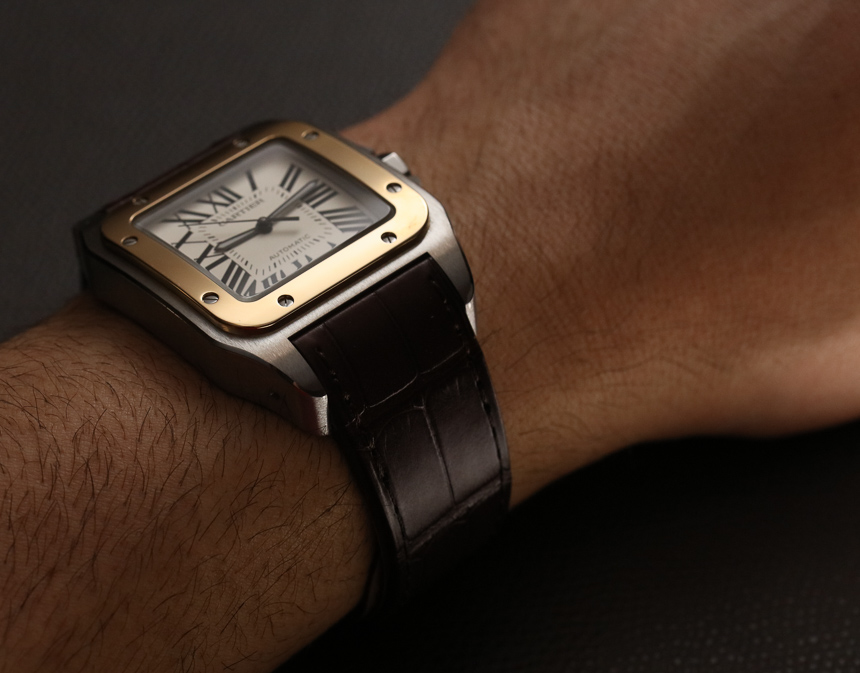 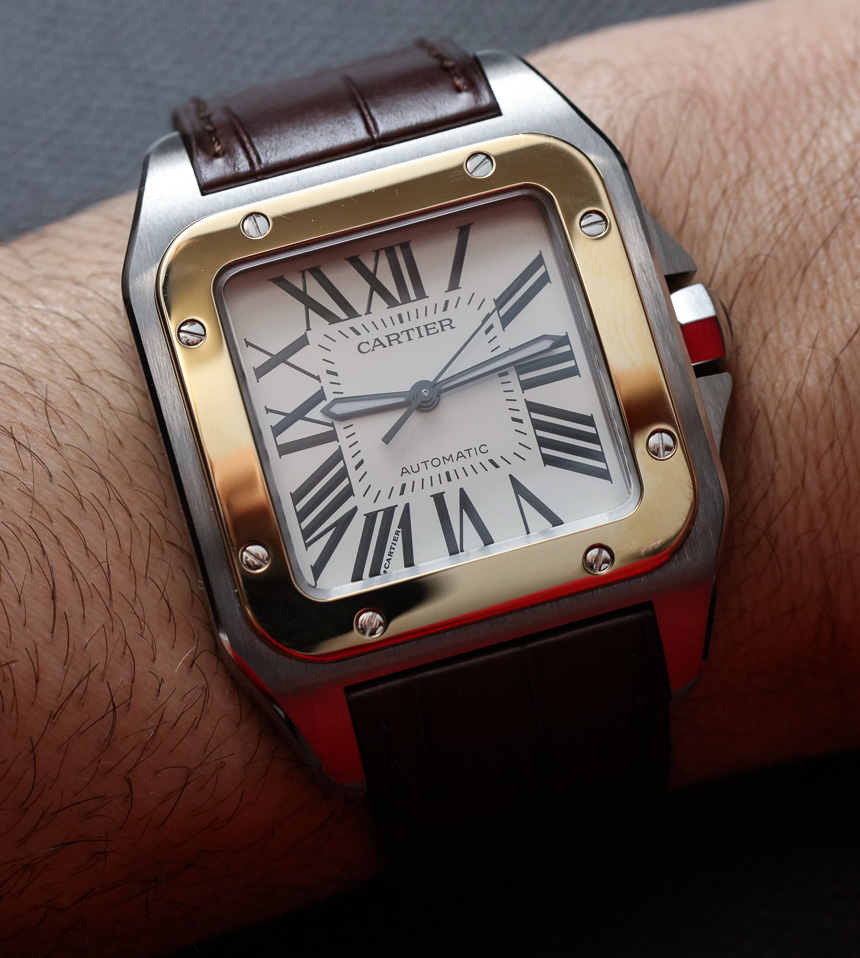 The “jumbo” looking size of the Cartier Santos 100 is deceptive, as the case (without the crown) is only 38mm wide. With the crown, the steel case is 41.3mm wide by 51.1m tall, and just 10.34mm thick. That means the Cartier Santos 100 works on a variety of wrists large or small, and also has a bold appearance that a lot of watch lovers are looking for. If you recall, back in 2012, we offered a light review of another model in this collection with the Cartier Santos 100 with the aDLC-coated black case here. Really, the only difference is the colors and coating materials, and yet this more traditional-looking piece has a very different visual personality to it. 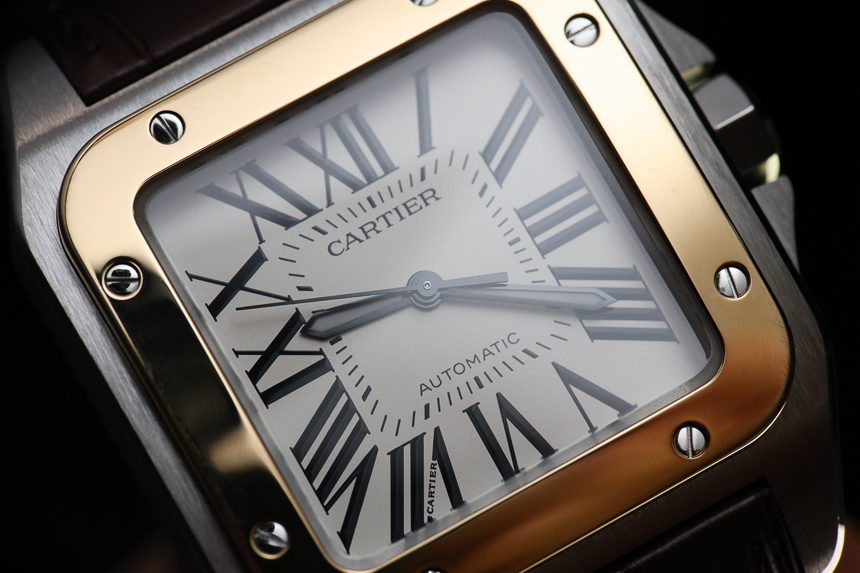 The base Cartier Santos 100 reference W20073X8 model is in all steel on a black strap, while this reference W20072X7 version comes on a brown alligator strap with an 18k yellow gold bezel. It also happens to be my favorite of the bunch. The bezel is easily the most distinctive element of the Santos 100 collection, and it is something you won’t see on the Santos-Dumont. Cartier has of course produced other smaller Santos models in the past with the “screwed-in” square bezel – a look that has carried over into so much of the brand’s jewelry collection such as the very popular LOVE bangle-style bracelets which appear to have screws around it… and that are actually secured to your wrist with a screw. 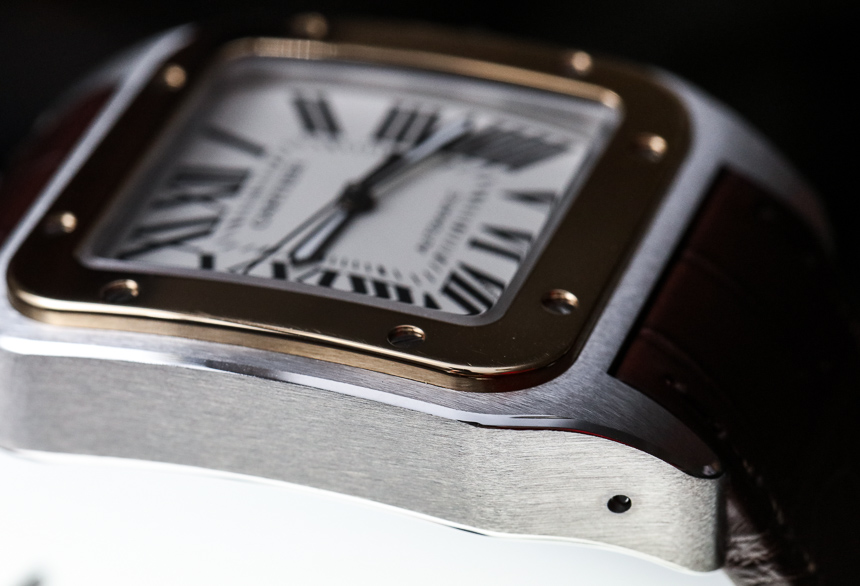 This “industrial look” with exposed screws is something which marks a lot of men’s watches and goes back to the very first wrist watch produced by Cartier for men. The story goes that, in 1904, Louis Cartier was asked by his friend Alberto Santos-Dumont to create a timepiece he could wear while flying a plane. This was just one year after the Wright brothers succeeding in their seminal “first powered flight” in 1903 in Kitty Hawk North Carolina. Brazilian by origin, Santos-Dumont spent a lot of time in Europe as well and was among a handful of other aviation pioneers around the world experimenting with early flying machines. The process of flying back then was considerably more hands-on and dangerous than it is today. It goes without saying that it required two hands all the time, and looking at a pocket watch was really not an option. So like early divers’ watches, early aviation wrist watches were needed because pilots needed to use both hands while operating planes. 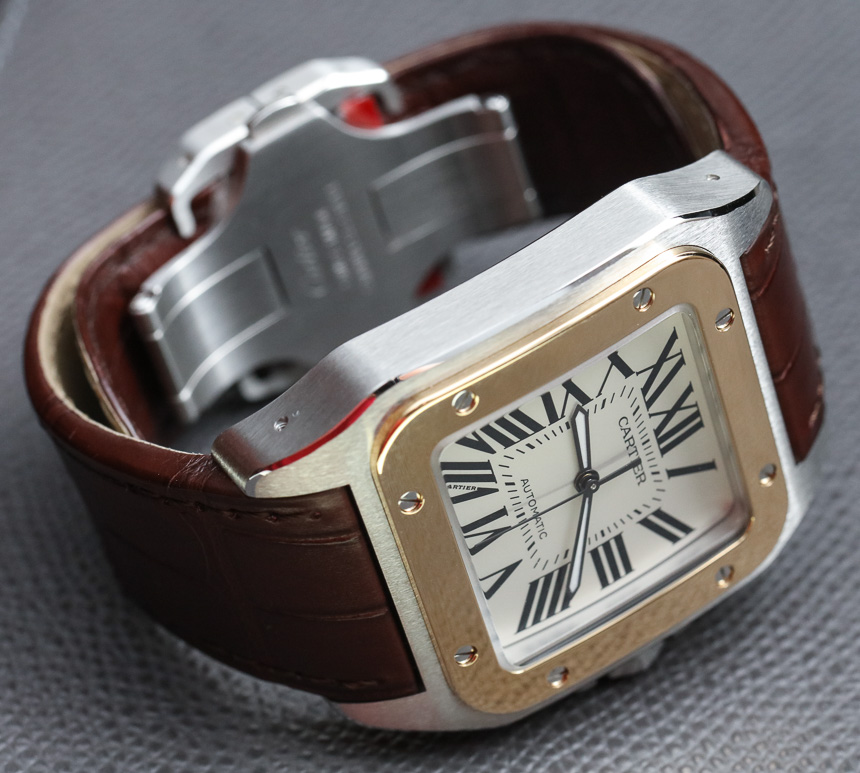 The square shape of the watch endured, and today continues its legacy in timepieces such as this. While the exposed screws should theoretically be “engineered out,” they have become a style and decorative element which I agree helps the overall composition of the watch feel more masculine, as well as help remind you that it is indeed a machine on the wrist as opposed to a mere style or status symbol. 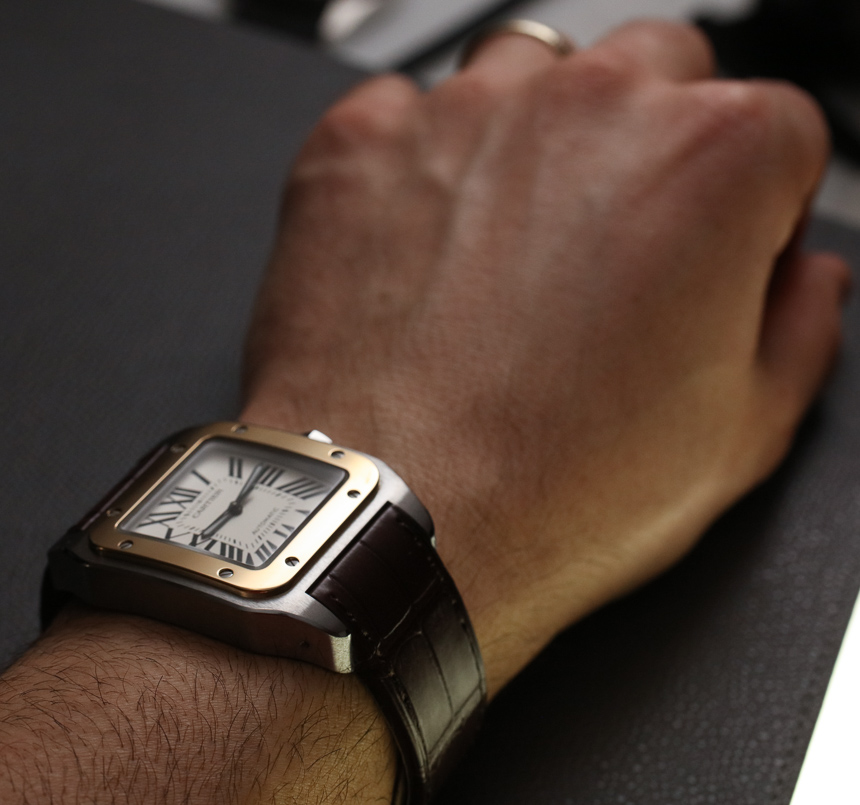 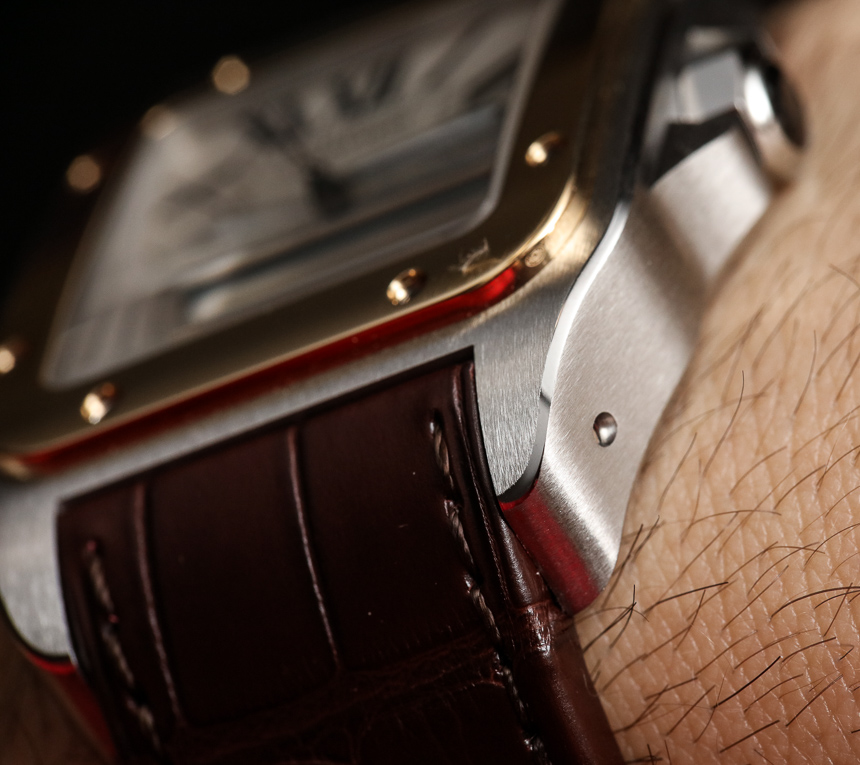 Going back to the appeal of the Cartier Santos 100 case, when you put it on, you realize just how curved it is. The thick lugs gracefully arch down creating a shape that allows the case to sit comfortably on the wrist but also adds some of the necessary curvature to give the Cartier Santos 100 that “organic” look which combines harmoniously with your wrist. Moreover, even though the case is square, pretty much everything has rounded edges, from the case itself to the bezel. Sharp angles are there, but they are fewer and more deliberate than the curves. In fact, part of the genius of the design is in creating a very rounded square case and having most of the true angles appear on the dial.