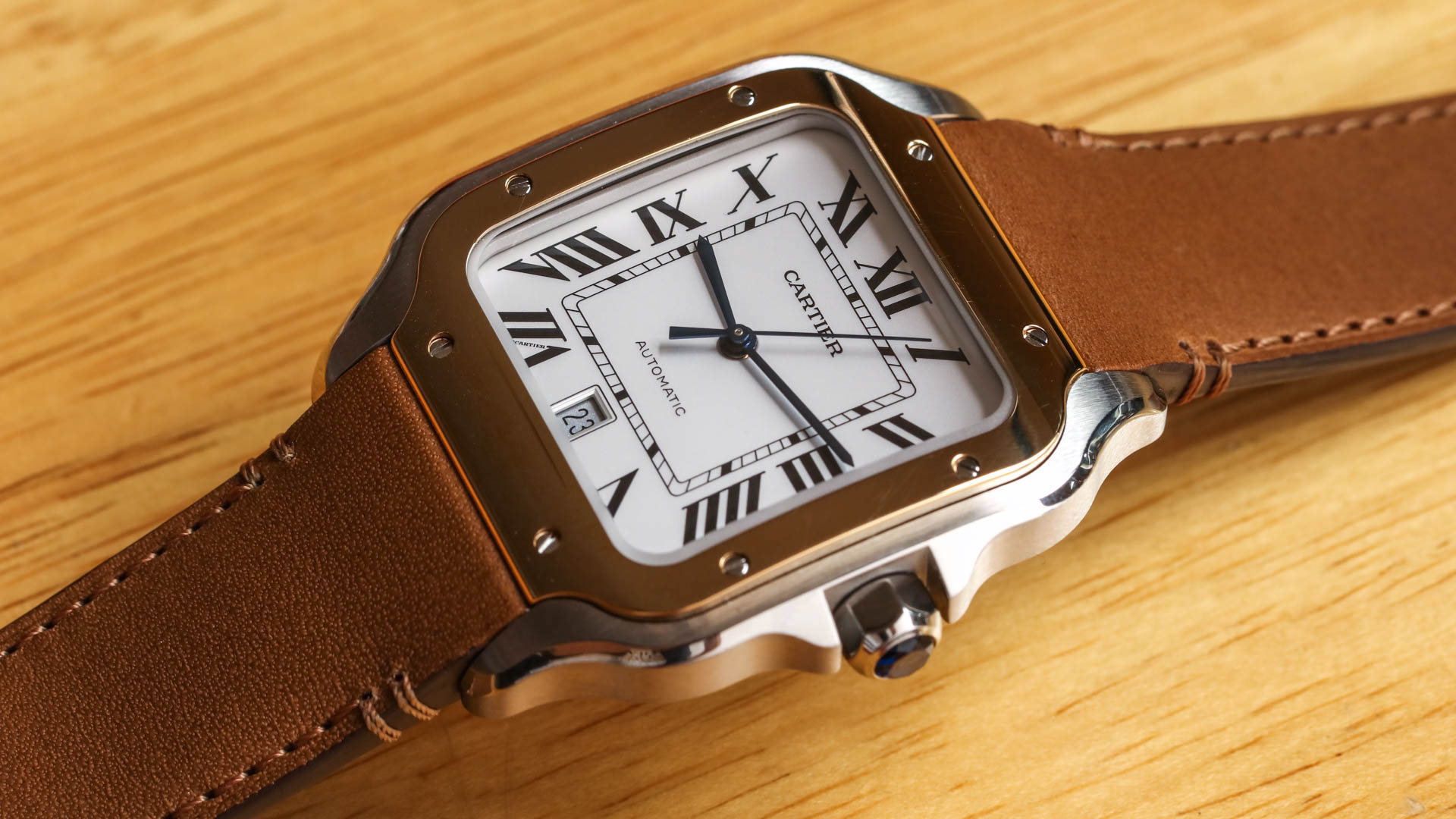 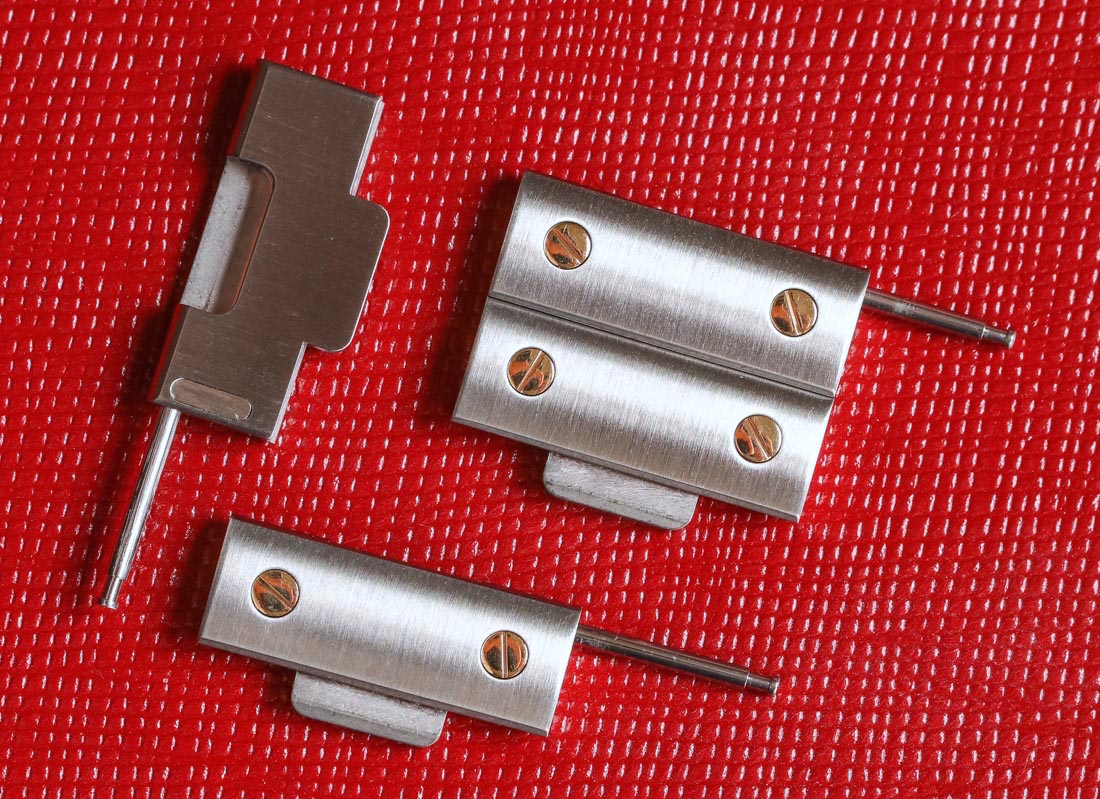 Cartier does include a small tool to help you adjust the bracelet but you don’t really need it. In order to remove a link you need only press a small pusher, which then releases a spring-loaded pin. Using your fingers you pull out the pin a bit more in order to release the connection with the adjacent link. In just a few minutes even a novice can adjust the size of their bracelet. This is great but I actually wonder how often people will be adjusting the bracelet after the first time they size it. It isn’t like the watch feels as though it comes with a premium price for this bit of functionality, but it is perhaps a shame that users of this watch will so infrequently be able to use this well-designed SmartLink system. 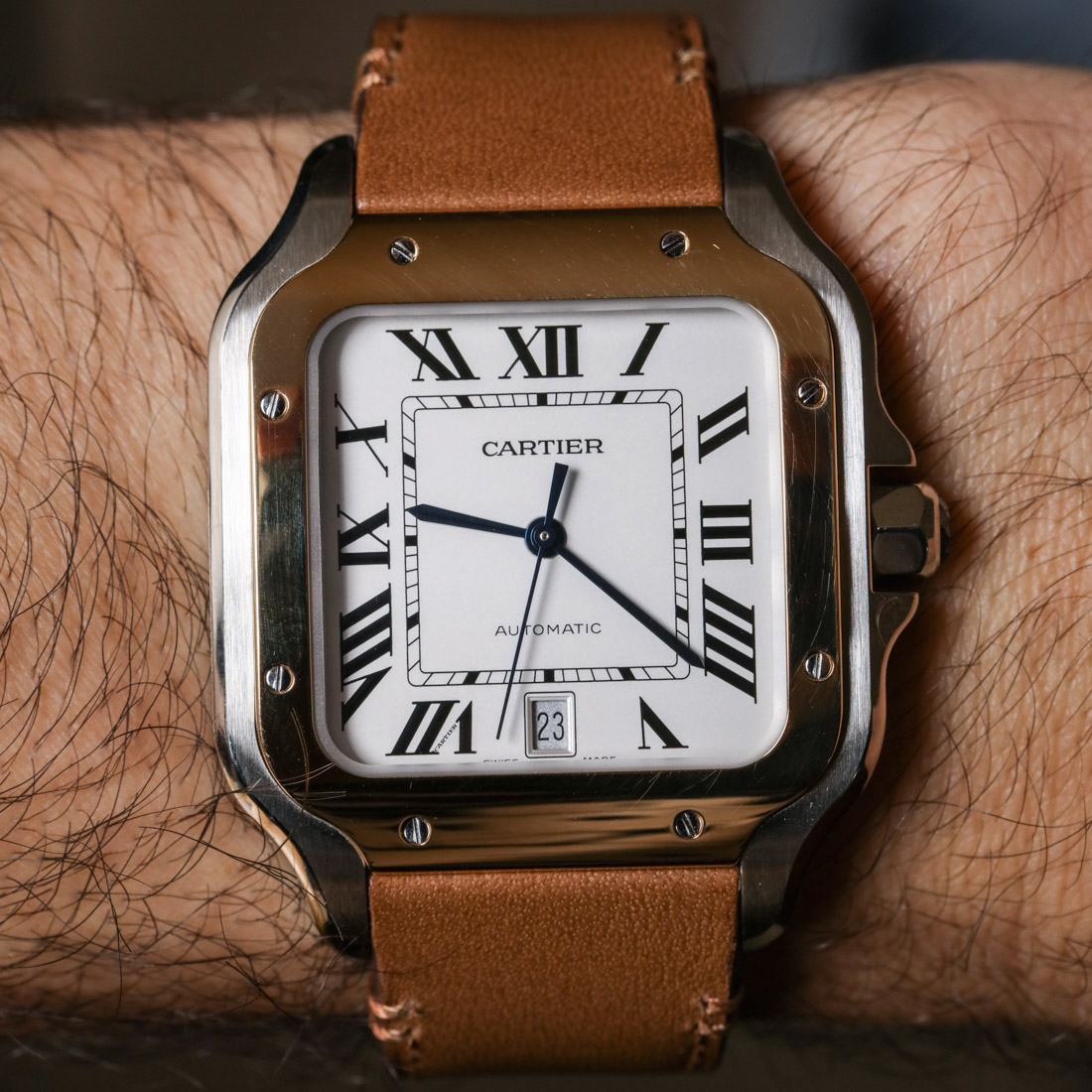 The QuickSwitch system at the lugs is one of many such quick-release systems available today. Cartier’s system is better than most, and by that I mean in regard to build quality and a sense of assurance that the connection between bracelet and case is strong. I’ve used other similar quick-release systems and while most are great, a few of them cause concern as to how well they might age after lots of repeated use. You’ll use the QuickSwitch system to release the strap or bracelet from the case when you want to swap them. You’ll do this because it is both fun and helps mix up the style of your watch. Honestly, if you are a man who likes the look of a watch strap and also likes the look of matching colors, then getting a strap in at least brown, black, and gray makes a lot of sense. Yes you need to purchase some additional straps, but the result is a very simple way to keep your watch as stylistically versatile as possible.

When I first reviewed the Cartier Santos a few years ago I spent a long time talking about how making an effective square watch case design was a challenge. It isn’t an accident that most wristwatches sport round cases. For me the trick is the multiple square shapes which “stack” on one another, as well as the point to include as many curved angles as possible in this otherwise square case design. The bezel rivets and screws don’t hurt either. 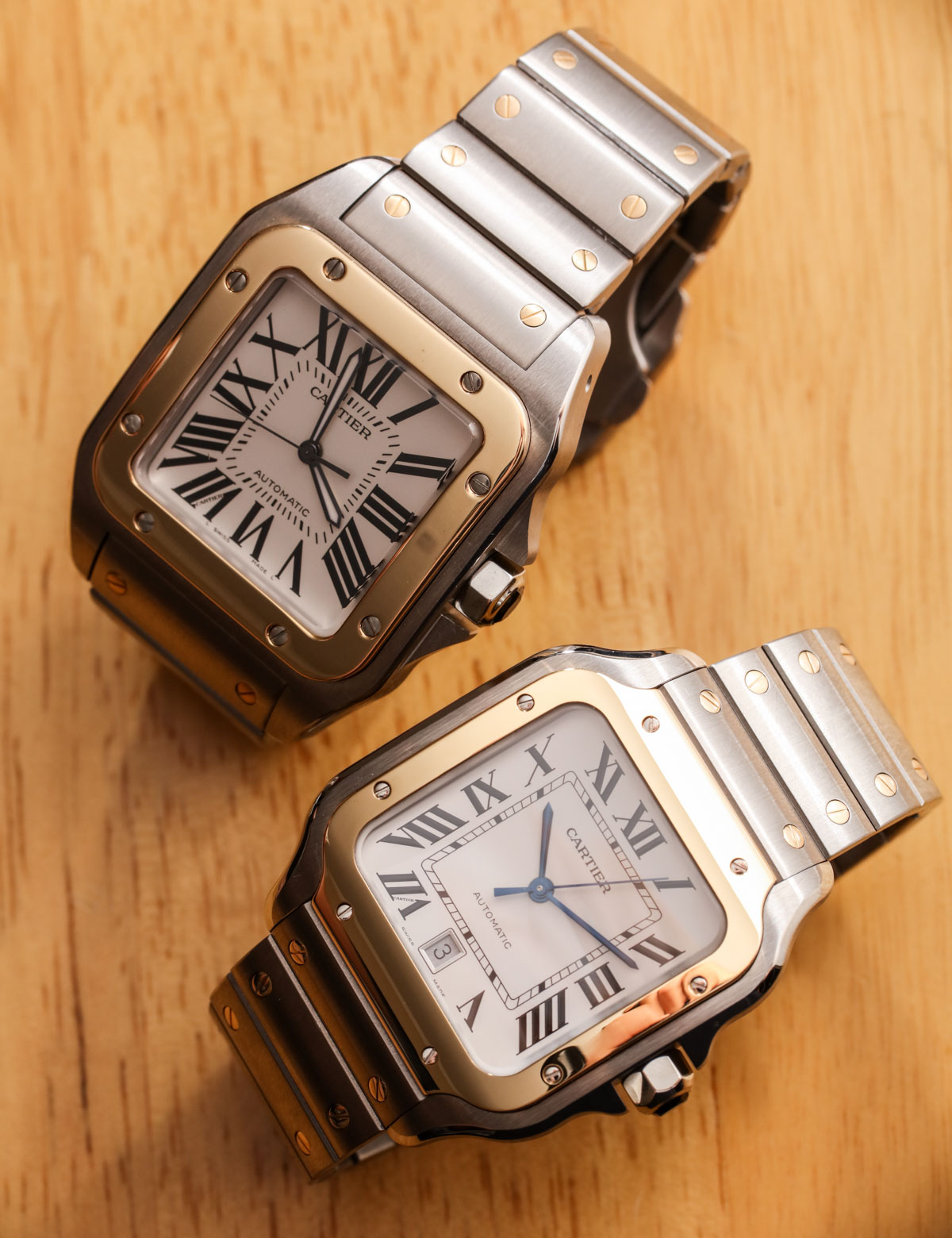 I actually felt that the bezel was a feature in making the square case design work. Surprisingly, the bezel of this new version doesn’t really take away from the elegance of the square case. And then there is the dial. It’s classic and very “Cartier” with its silvery opaline face marked with a box of Roman numeral hour markers. At a glance the previous and current generation dials are very much the same, but upon closer inspection you’ll notice a large assortment of differences. The most important area might be the hands. 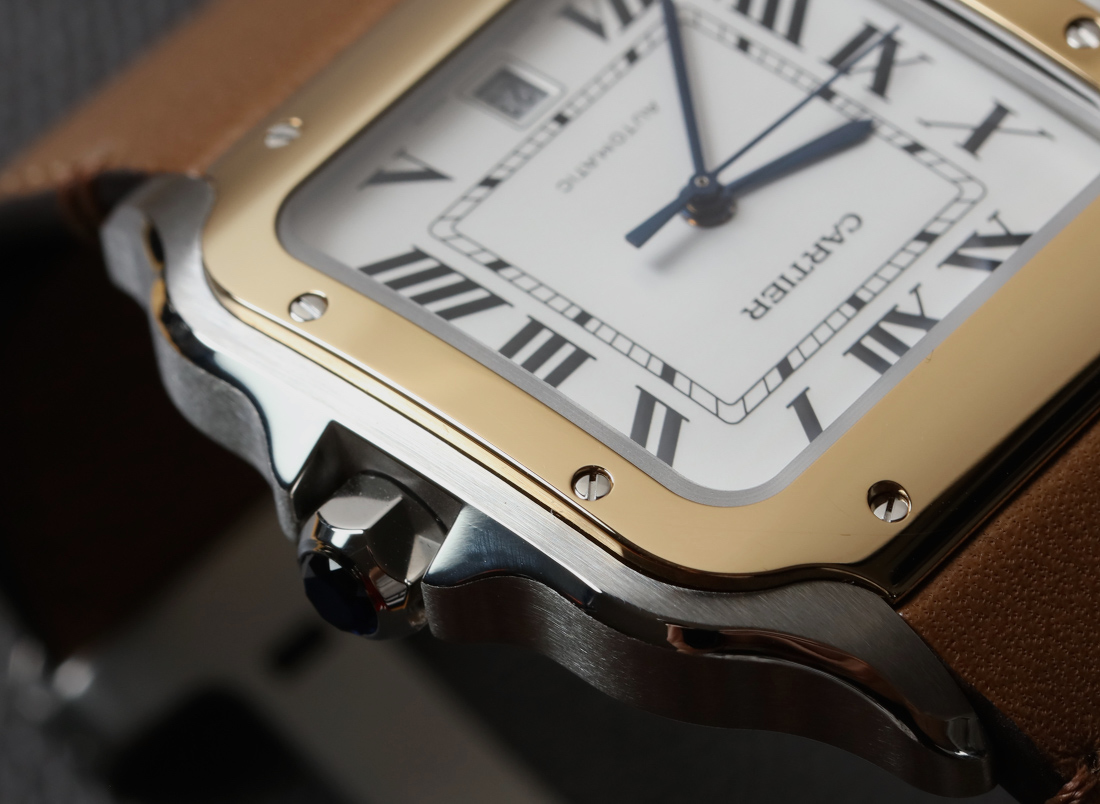 While I can easily live with the current generation Santos dial if given the opportunity, I believe I have a slight preference for the previous generation’s dial. Perhaps it is simply because the blue steel hands appear just a bit thin to me (even though they are long enough), and I want them to be just a bit wider. Again, the new Santos dial with the blued-steel hands is dressier, whereas the old generation model is sportier. Both dials have the “secret” Cartier name written in the 7 o’clock Roman numeral hour marker.

Inside the new generation Santos W2SA0006 is the in-house made Cartier caliber 1847 MC automatic mechanical movement. The movement, unfortunately, isn’t visible through a caseback window – though that might have been a really nice touch. The movement operates at 4Hz with about 2 days of power reserve. As I am in the habit of comparing the new Santos to the previous generation Santos 100, I will say that the former Santos models also had automatic mechanical movements, but those that were supplied by other Swiss companies such as ETA. 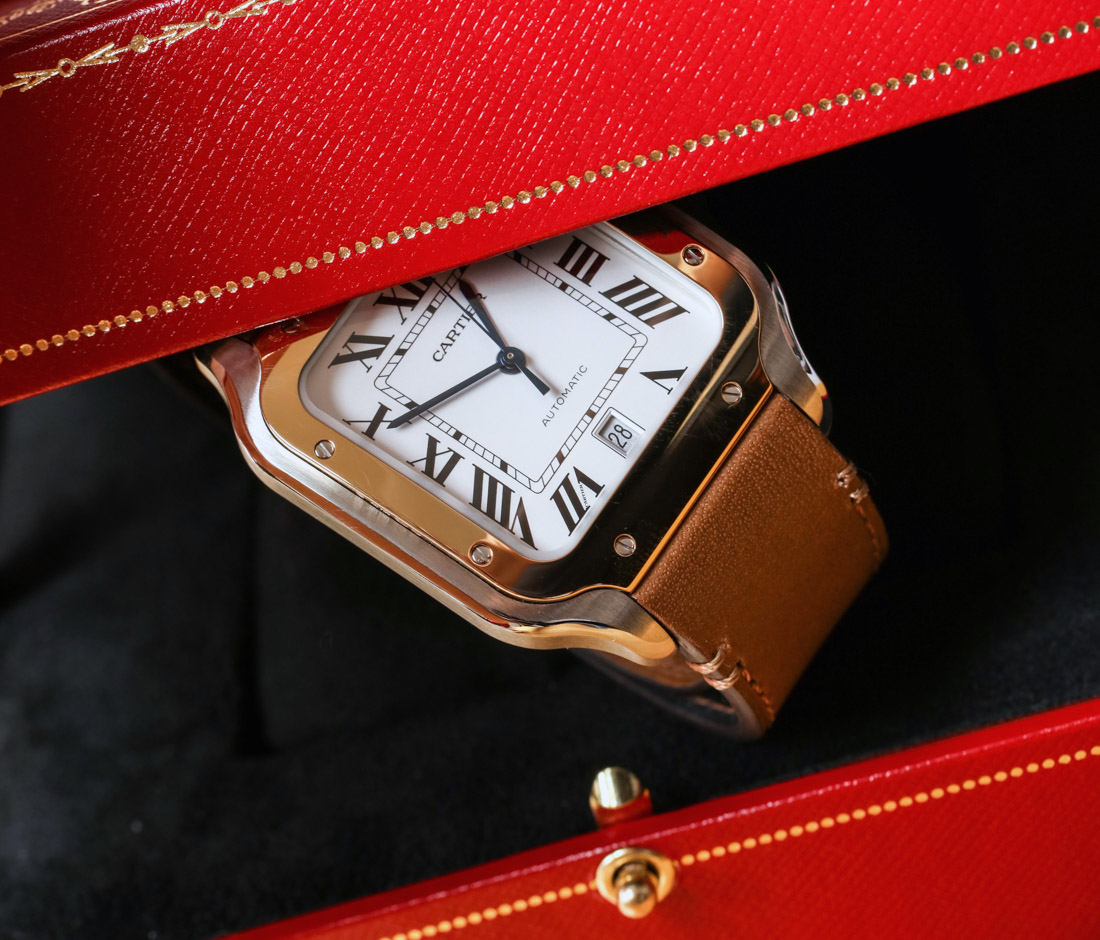 One of my favorite features of the Santos de Cartier watch is its ability to be both simple and interesting at the same time. As a wristwatch it is comfortable, offers familiar information, and provides a hassle-free and versatile wearing and ownership experience. Its timeless design allows it to work in a variety of contexts and it still has more communicative power than your standard round-case dress watch. In addition to the distinctive case shape, Cartier’s use of screws and the classic on-brand dial helps give the watch more personality than its competitors. Cartier further succeeded in making the new Santos watches more relevant. The quick-release bracelet/strap system as well as the thinner case profile make this a more compelling watch for more people these days. If anything, I love the previous generation Santos 100 XL as much as I do because it was a less inclusive design and a bit more of an acquired taste on the wrist. With this generation model, Cartier has produced the most wearable men’s Santos watch of modern times. Beyond that, I can easily see collectors owning both generations of men’s Santos watches.

For the money the real deal offered by Cartier is the all-steel version of the Santos Large, which is the reference WSSA0009 that has a retail price of $6,850 USD. The two-tone model increases the price by a few thousand – but you do get the cool look of steel and gold. The Santos de Cartier Large Model reference W2SA0006 as reviewed here has a retail price of $10,400 USD. cartier.com

Necessary Data
>Brand: Cartier
>Model: Santos Large Model reference W2SA0006
>Price: $10,400 USD
>Size: 38.9mm wide, 9.08mm thick
>When reviewer would personally wear it: On formal or business occasions when I want to stand out (and still be taken seriously).
>Friend we’d recommend it to first: Someone sympathetic to square watches and truly iconic designs who also wants to switch out their straps often.
>Best characteristic of watch: Cartier did a great job taking the Santos to a new place, for a new demographic of watch lovers. The bracelet adjustment system might be over-engineered for most consumer needs, but it does its job very well. Thinner Santos case profile will delight many.
>Worst characteristic of watch: Bracelet deployant feels like a step backwards compared to previous generation. Bezel style might take time to get used to. Hour and minute hands seem just a bit too narrow for the overall design of the dial and case.