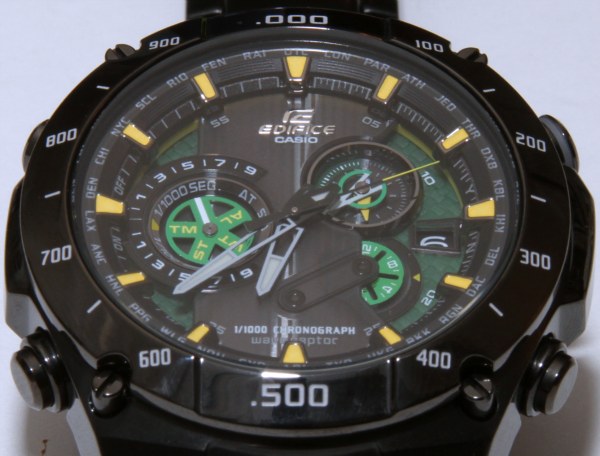 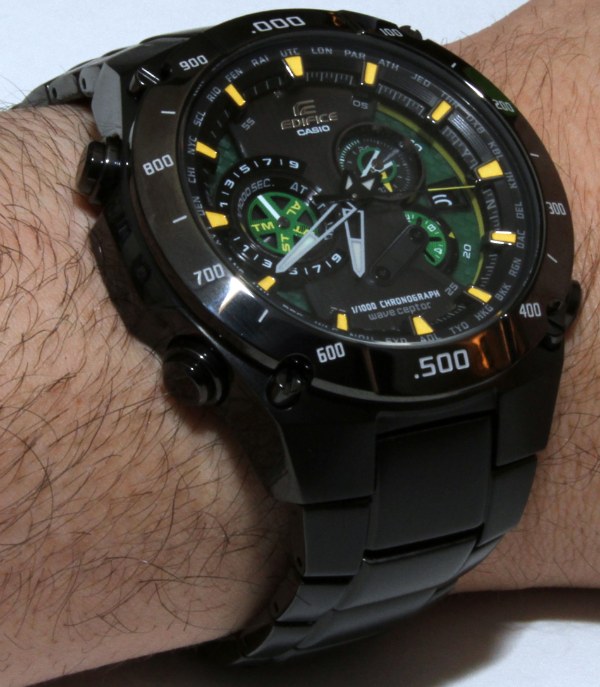 While this watch dial in action looks like a miniature aerial view of an amusement park, something is actually going on – this isn’t all for show. With the reference EQWM1100DC-1A2 Edifice “Black Label” watch, Casio wanted to turn all of the functions present in most of its better digital watches in a analog stage show. To be honest I never thought such a thing could be done, even though Casio has been experimenting with making sophisticated digital functions in analog format for a while. Tag Heuer was getting all hot on themselves for putting a mechanical analog 1/100th of a second movement in their $50,000 Carrera Mikrograph watch, and here Casio has a 1/1000th of a second analog chronograph in their $500 quartz watch. Frankly I like the looks of this Casio a bit better.

Casio has been developing it’s Edifice collection of watches for the last few years, and I like where they are going. Some people are going to take one look at this dial and sigh at how complex it is. This is the opposite of a simple watch dial. In fact, Casio designers did just about everything they could do to give it a rich, three-dimensional appearance with as many textures and levels as possible. There is also the fact that the hands and dials each have at least more than one function depending on the mode the watch is in. I will however say that legibility is better than one expects. There are large easy to see yellowish hour markers and white hands. These have been lume coated and are pretty easy to see in the dark.  There is also the date window. It looks hidden, but once you know where to look it isn’t hard to spot. The watch has full calendar date to the year 2099, but you’ll need to use the manual to adjust the calendar properly.

Speaking of the manual, this is a must for understanding this watch. It has four pushers on it and a host of functions that aren’t too obvious. Sure you can figure out some of the basics, but this is a timepiece that you’d be wasting money on if you didn’t take at least 15 minutes to read up about it. Having said that however, I will say that after you set the time and date, they are easy to spot, and this watch makes for a decent daily wear if you aren’t going to be using all the functions. Casio positions this Edifice Black Label watch as one of their higher-end timepieces, which means they have designed it to be convenient to live with. For Casio that means that it is light-powered and syncs to a local atomic clock using radio signals.

So the Japanese quartz movement is solar (any light really) powered, and should always be accurate. It is set to sync itself with a local atomic clock 6 times a day. In power saving mode the battery can last about 5 months. Regardless, it is a good idea to store the watch where it has access to light. Those deep-set areas on the dial that look like green carbon fiber are where light enters to reach the photovoltaic cells. 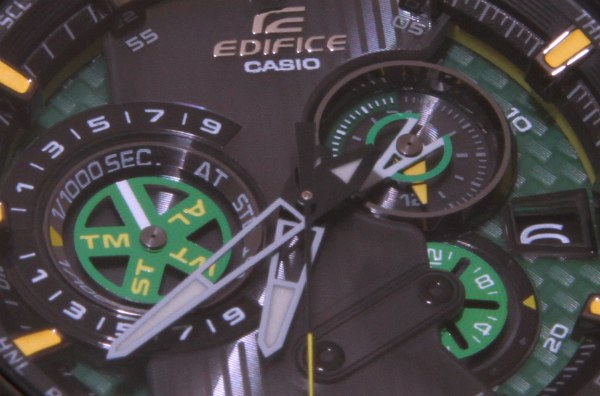 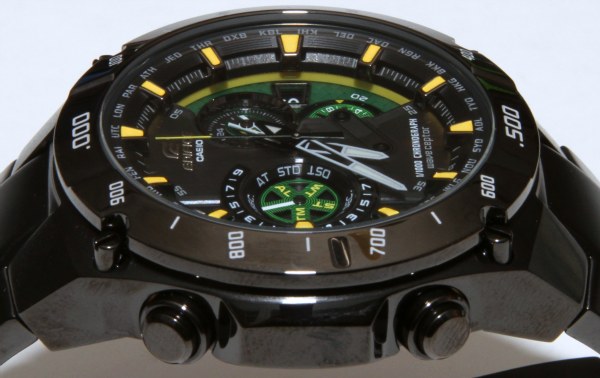 You’ll be surprised to learn that in addition to the time, date, and 1/1000 of a second chronograph, the watch has a world time function and alarm. The world time function is neat, because it uses the upper left subdial to show you the reference time. In fact, you can choose to have the reference time on the main dial, and the second time zone on the little subdial. Again, consult the manual for this. Easily the neatest part about operating the watch is the 1/1000th of a second chronograph. When operating the hands are all flying about rapidly. It is an intense little feat of engineering, and relies of five different small motors. Though reading the measured time isn’t that easy as it uses all the dials to measure the time, and you need to know how to read them. You also need pretty good vision to see all the little numbers. Seeing the miniature ballet of hands moving around never seems to get old. 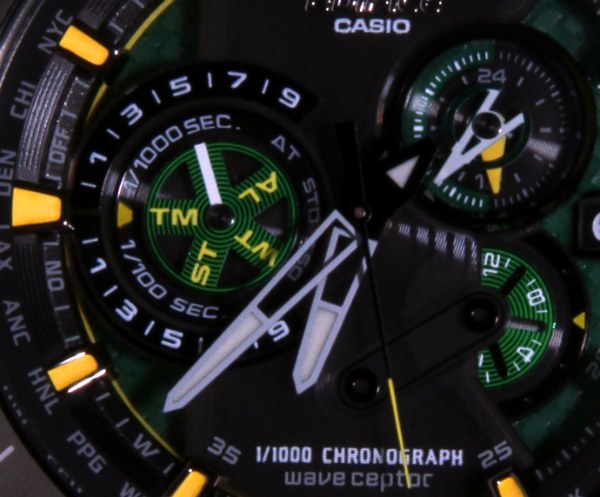 What makes the watch harder to use is the lack of labels on the pushers on the side of the case. There are labels on the rear of the watch, but they aren’t super helpful. Many digital Casio watches try to label the hands, at least generally so that you know what they do in most situations. That sort of exists here, you need to take the watch off to see them, and it can be a bit confusing and frustrating to figure things out without the manual. I recommend learning how to use the basic functions, and not throwing the booklet away for when you need it. As I have said in the past, Casio does a good job at writing the manuals – so at least when you consult it to figure out how to do something, the answer isn’t a horrid pain to find or understand. 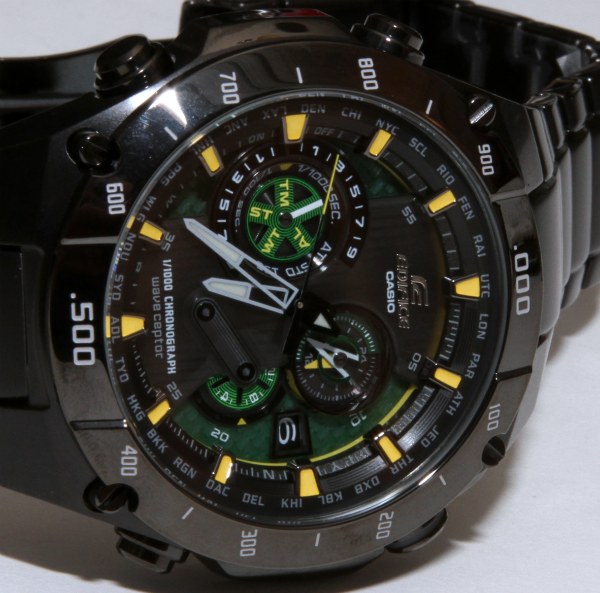 Using a steel case that has been IP black coated, this Edifice watch has an impressive stance with its multi-color black, green, and yellow dial. The case wears a bit smaller than it is because of the thick bezel, but it is 46.9mm wide and 51.5mm tall. Though it isn’t super thick at 13.7mm. The case is water resistant to 100 meters and has a mineral crystal. The bracelet is integrated into the case and has a push button deployment clasp. While it is not as adjustable as other Casio bracelets, you shouldn’t have a problem getting a comfortable fit. Most people won’t think this watch is a Casio, and will likely be impressed when you tell them that it is. Just don’t forget the reference number so that you can tell them to go look for a Casio Edifice EQWM1100DC-1A2! Actually on the back of the watch Casio calls it a Wave Ceptor Edifice – there are so many names to keep track of.

Overall I am really impressed with the technology and what Casio was able to do with the EQWM1100DC-1A2 watch. The dial is really neat looking and the chronograph operation can’t be beat. At $500 it is really expensive for a Casio (by US standards – Japan has much more expensive models), but I don’t think it is too unreasonable. Now I need to get back to the manual to finish understanding how to set everything.