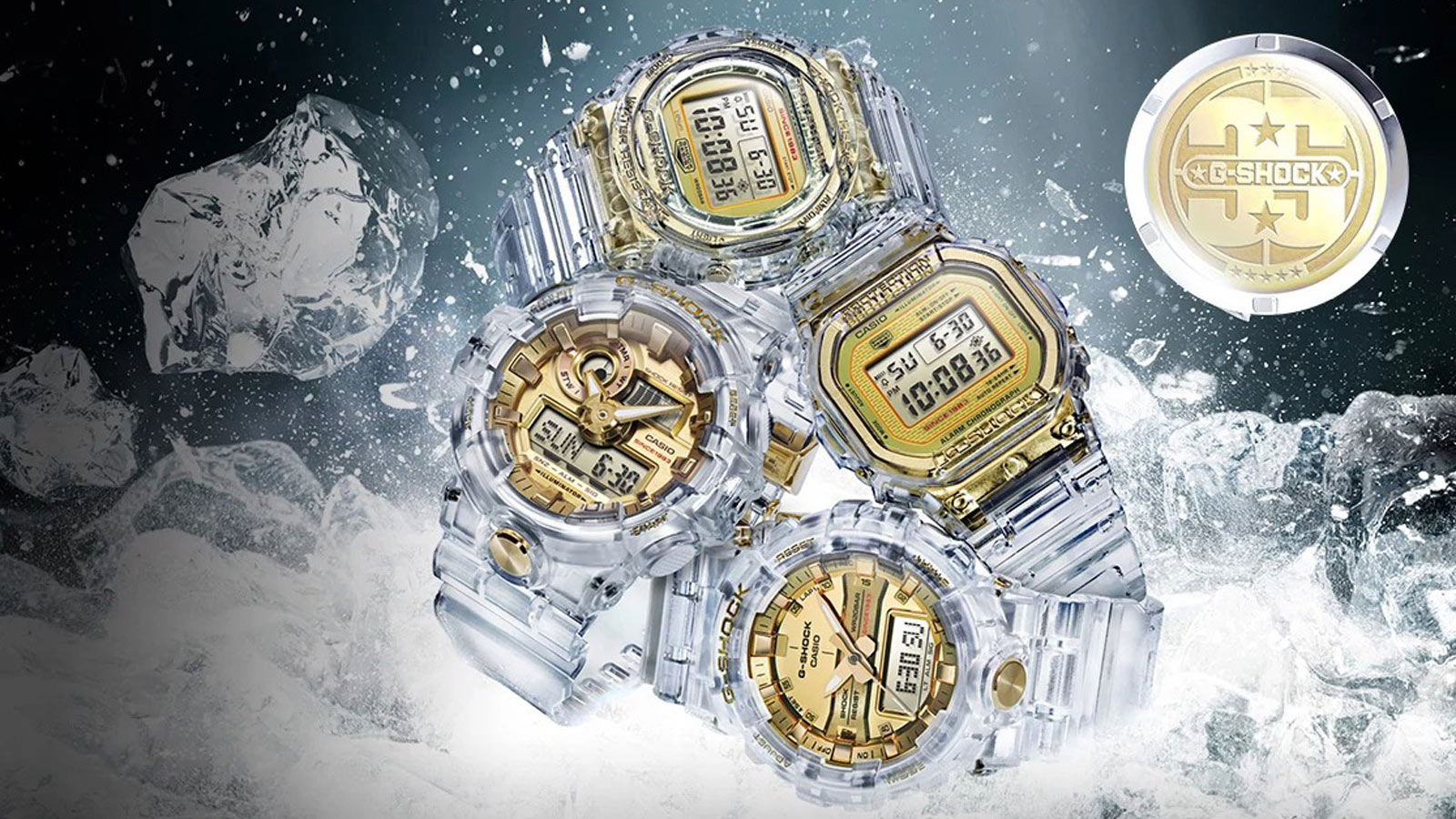 A cultural and horological icon – and not to mention just an all-around great watch – the Casio G-Shock celebrates its 35th anniversary this year. And as Casio always does, it has just released a couple of special edition G-Shock watches. Dubbed the Glacial Gold collection for their translucent ‘jelly’ cases and their gold watch faces, let’s go through them individually and briefly right now. 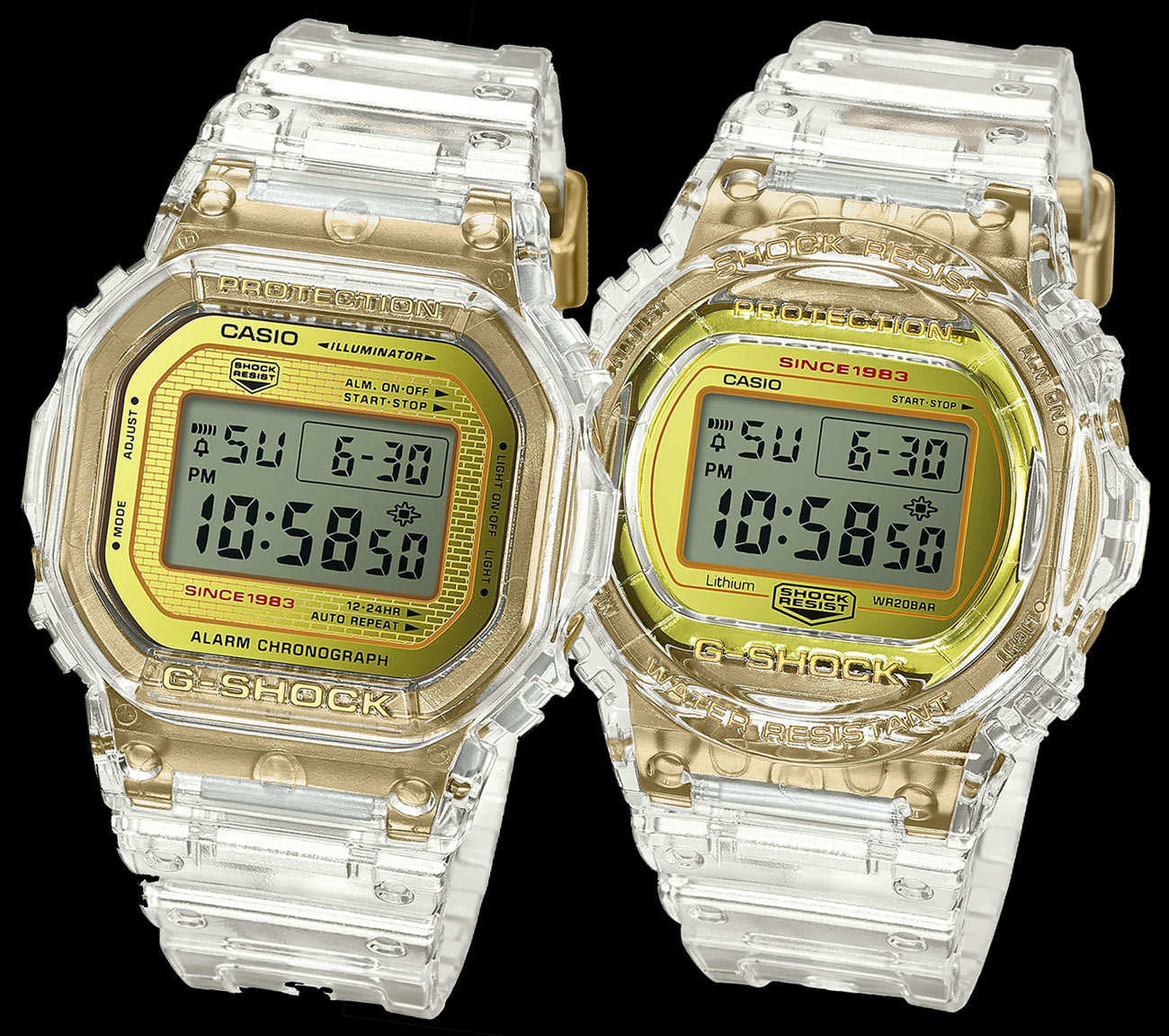 There are two digital models and two analog/digital models, and all of them are based on existing models in Casio’s catalog. The first one that I want to touch on is the DW5035E-7, which is based on the first ever G-Shock (the DW-5000C) from 1983. It has a translucent jelly case and through it, you can see its gold stainless steel inner case. The dial is gold and on it, you have ‘Since 1983’ in red. 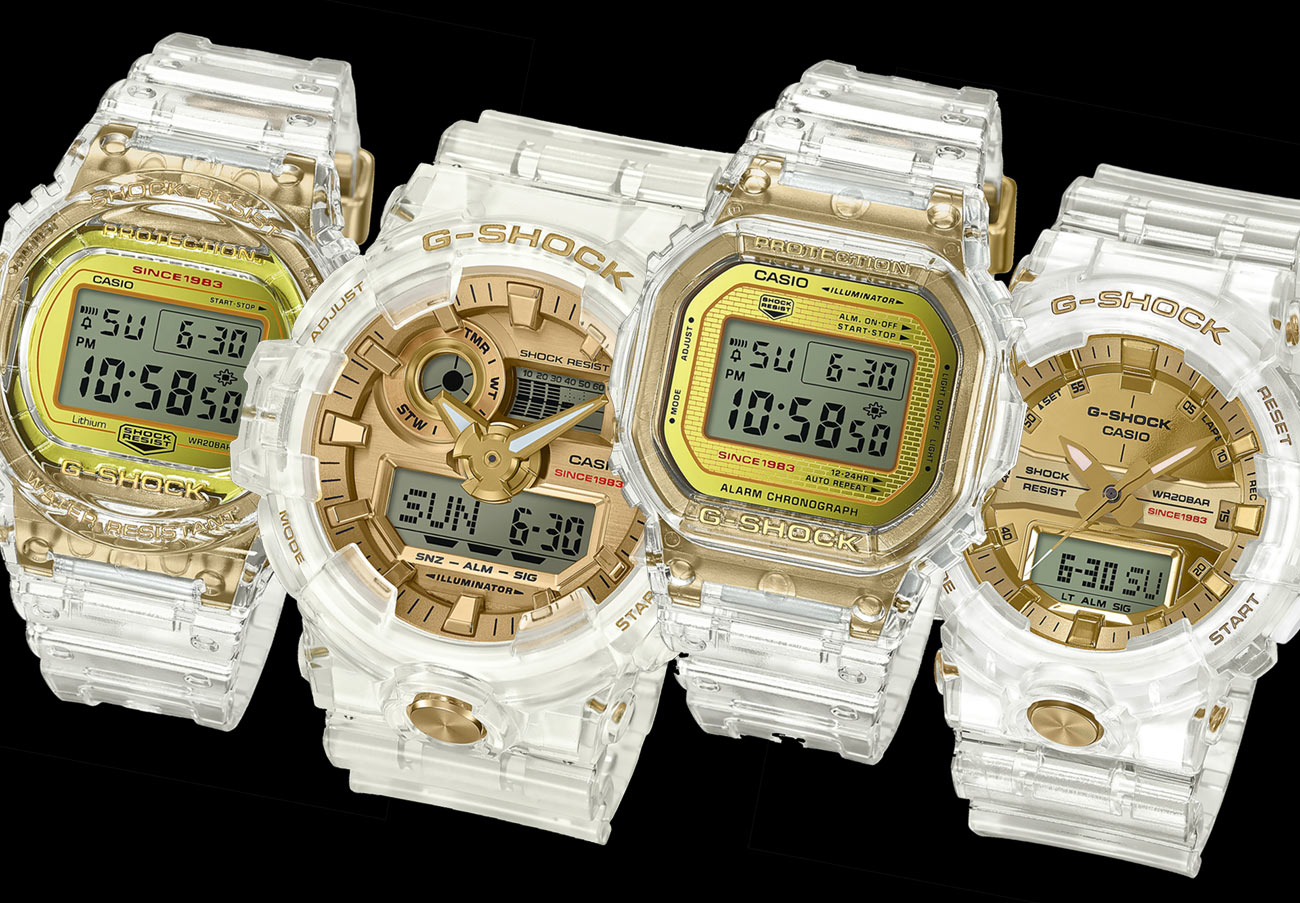 The other digital model is the DW5735E-7, which is also based on an old G-Shock – the DW5700, one of the first round G-Shock watches. It also has a translucent jelly case and a gold stainless steel inner case. Its gold dial also has the words ‘Since 1983’ in red. Both watches have similar functions and that includes a chronograph, countdown timer, alarm, and more. Both are also unique in that they have screw-down casebacks instead of the more common caseback that is held down by four screws. They also lack Tough Solar, so they run solely on batteries. 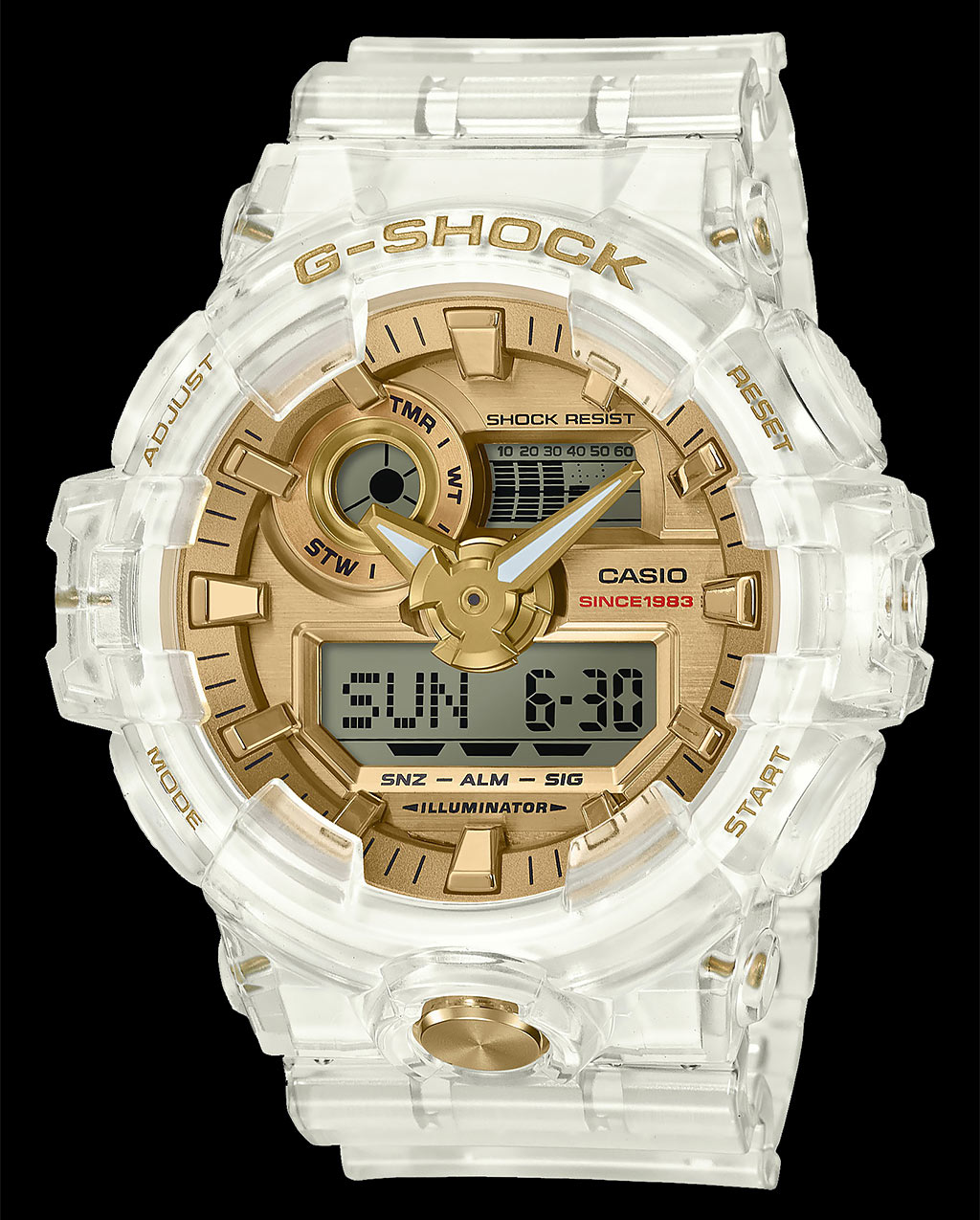 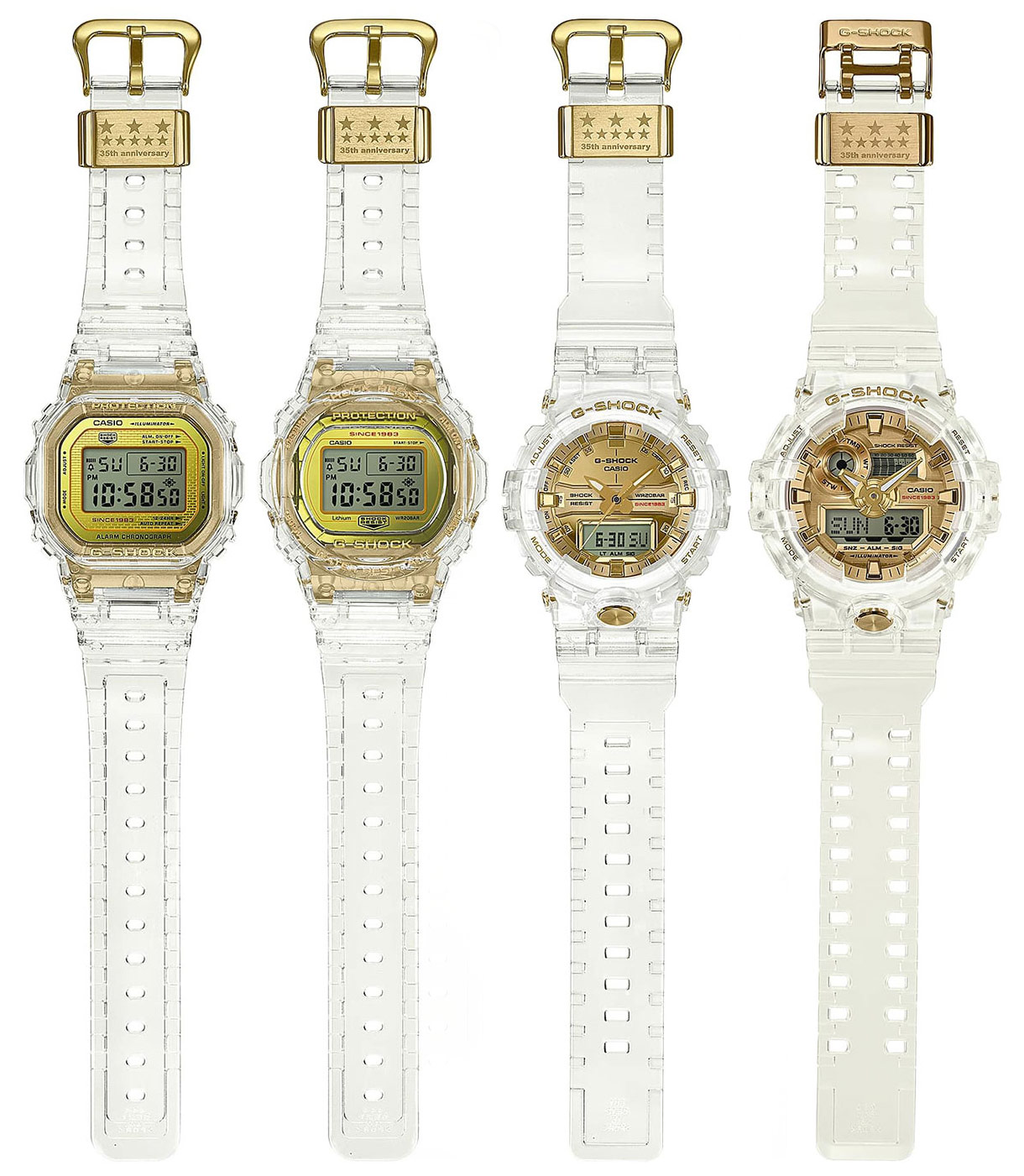 Translucent jelly cases have been immensely popular among the G-Shock faithful, so much so that there is no shortage of aftermarket jelly cases available for modification. Even if these new watches are not quite to my taste, it’s nice to see Casio acknowledging the popularity of such cases and giving G-Shock enthusiasts what they want. The Casio G-Shock Glacial Gold DW5035E-7 and DW5735E-7 are priced at $220 each while the GA735E-7A and GA835-7A are priced at $160 each. g-shock.com