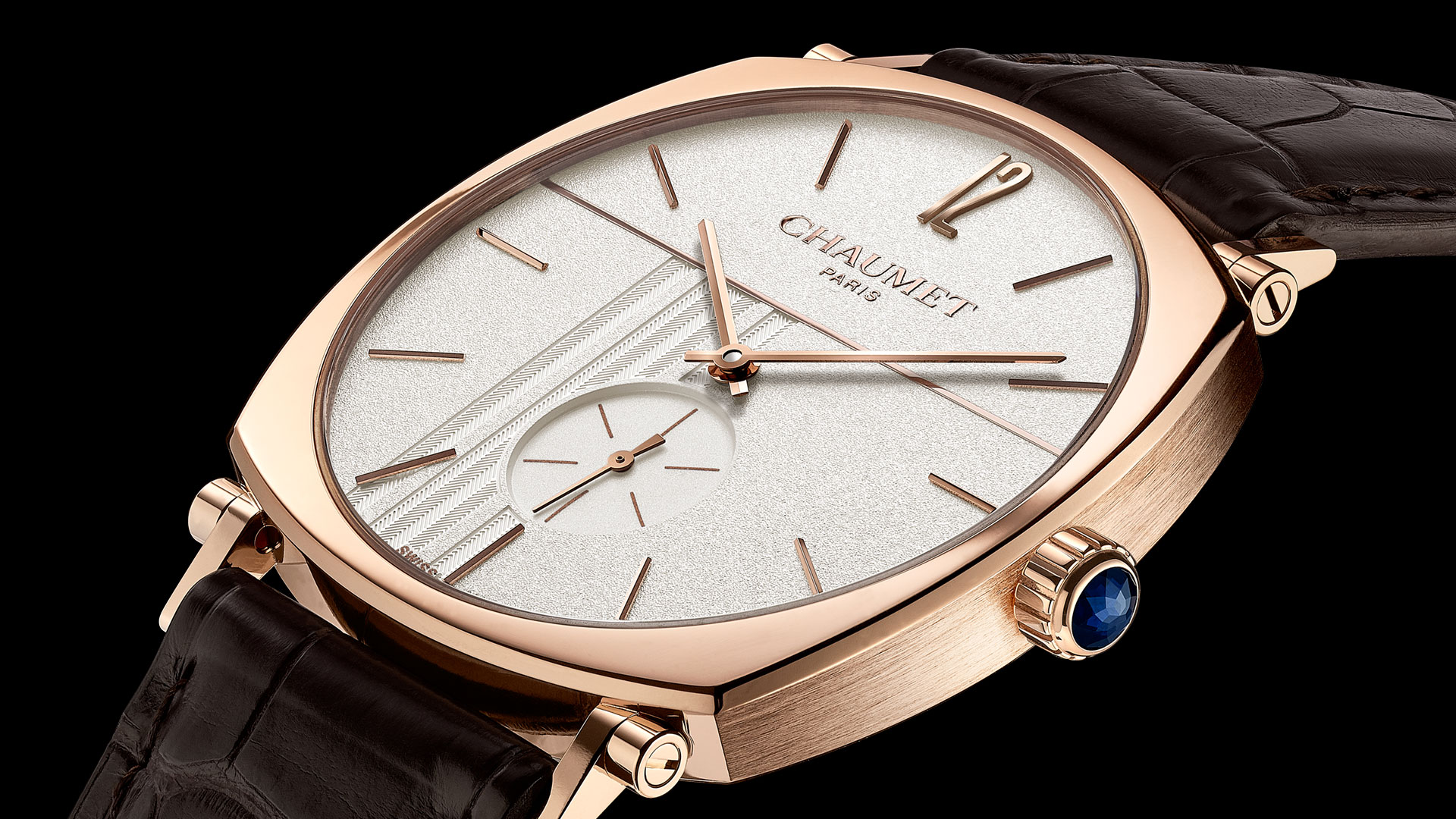 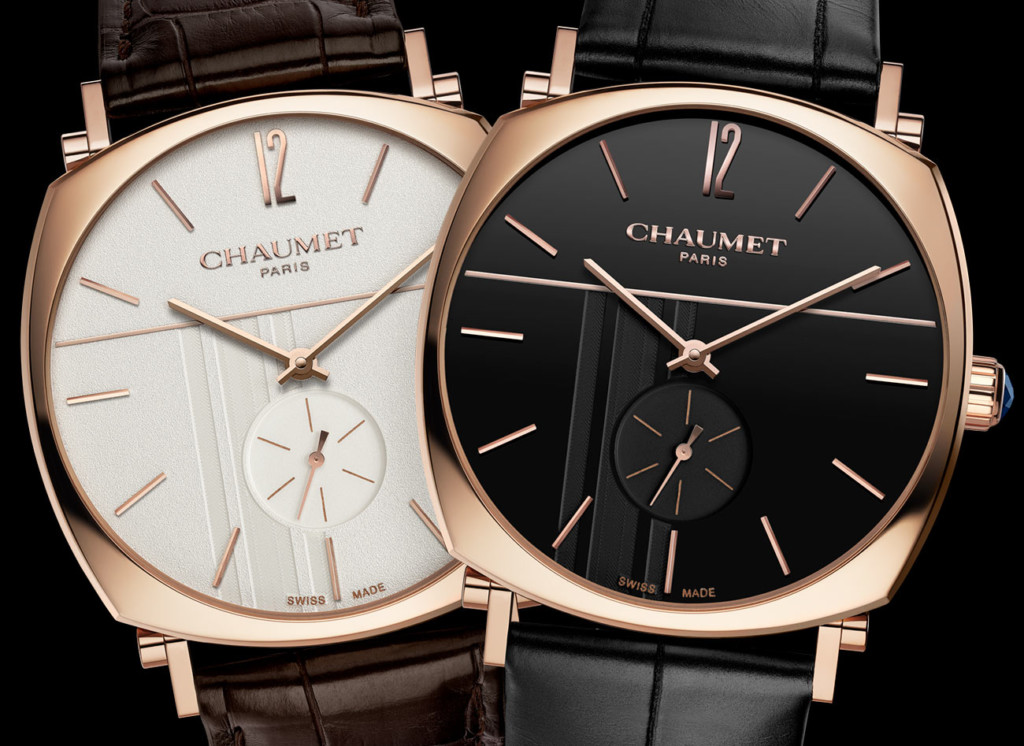 Interesting, although mostly known in the high-end jeweler world, and not widely known in watch circles, LVMH-owned Chaumet has released three new models in its men’s Dandy line – in rose gold with a cream or black dial and stainless steel with a blue dial. Featuring Swiss mechanical movements with sleek and refined looks apparently inspired by 1920s Parisian elegance, the collection adds some new dressier elements like a thin rose gold case and some unique “powdery” satin dial textures to its design. When it comes to watches, Chaumet is mostly recognized for its ladies’ collections, so it’s nice to see some expansion to its only men’s line, the Chaumet Dandy, but some sticker shock may be unavoidable. 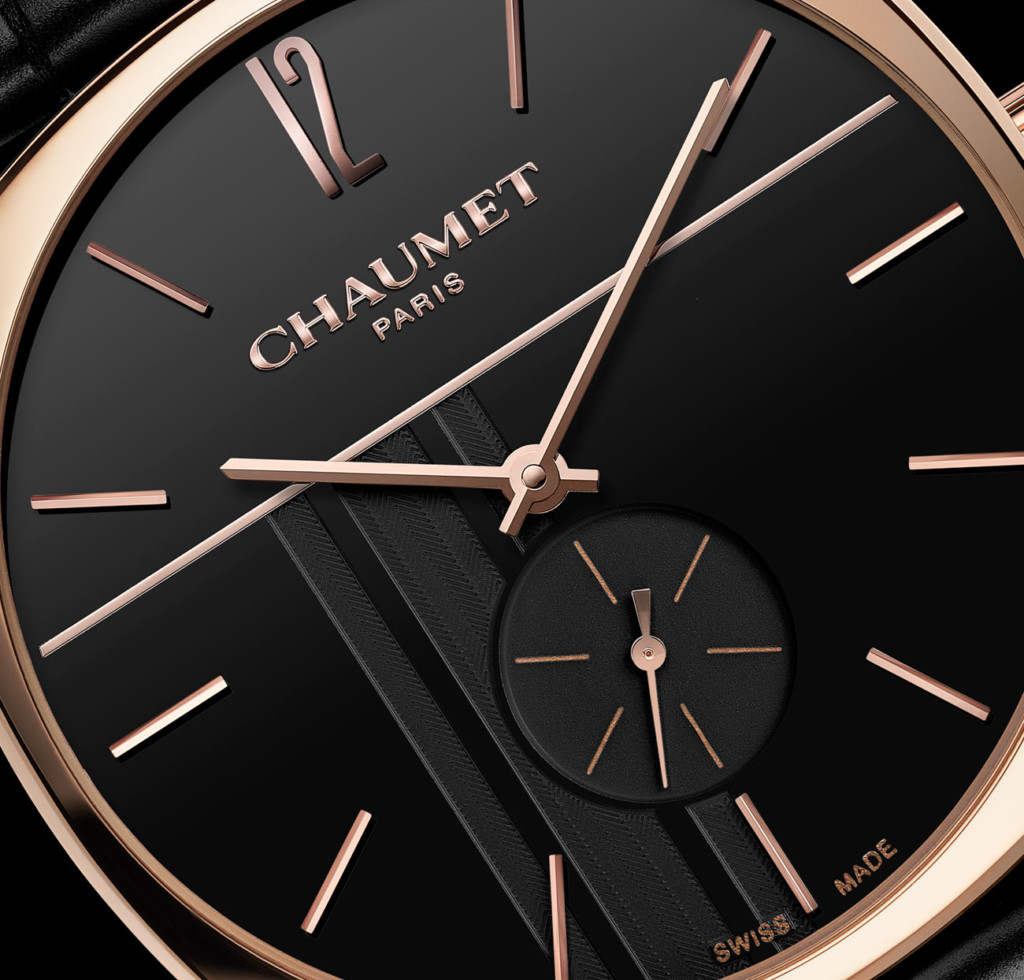 Chaumet Dandy watches are recognizable by their dial patterns and unique case shape. It’s technically a cushion, but the corners give it an almost squared look to me. Chaumet explains this as influenced by the “Regent” – a notorious diamond chosen by Napolean Bonaparte. For these Dandy watches, Chaumet brings two polished rose gold cases with brushed edges and a polished stainless steel model. Ironically enough, Chaumet has positioned these new Dandy models as “Large Model Watches,” even though they only measure in at 38mm wide by 8.55mm thick, putting these watches in a dressier category despite the articulating lugs and adding a little sporty touch. Each case features a cool blue sapphire-accented crown (they remind me very much of Cartier’s cabochons), a domed sapphire crystal, and a water resistance rating of 30m. 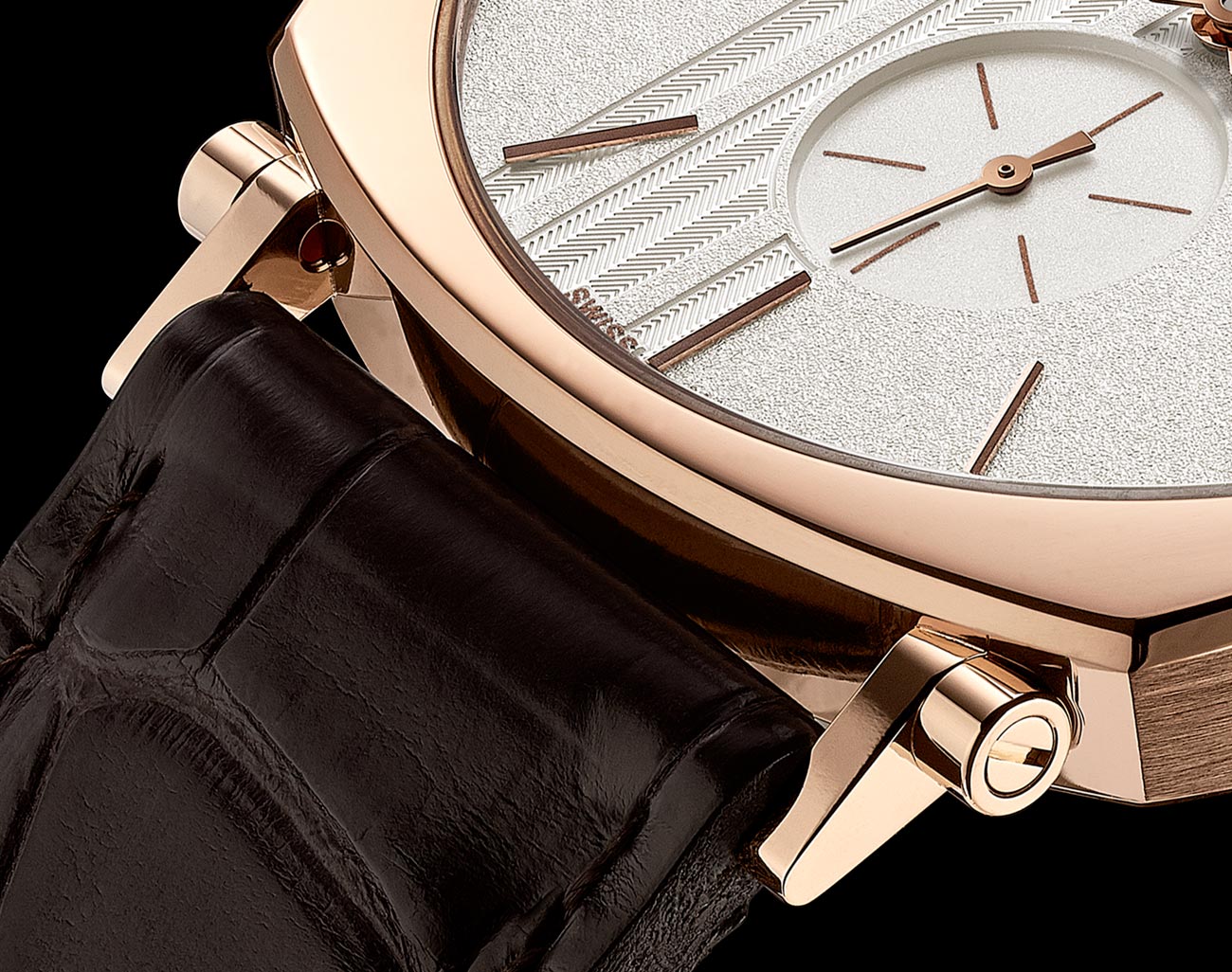 The dials are arguably the draw here, my favorite being the cream-colored model. I’m going to split these up in overall aesthetics because I want to discuss the blue model on its own. The rose gold cases and the dials associated with them, are hands down dressier models. The powdery texture of the cream dial is attractive, and fits the watch well, while the satin finish of the black dial is classic and easy to match with anything. Both of these models will come on an alligator leather strap and feature a seconds sub-dial at the 6 o’clock position that blends nicely with the “tone-on-tone bayadère” striping on the left side of the dial. On paper, I would have assumed these would be racing influenced, but they are classy dress watches and I like the premise. 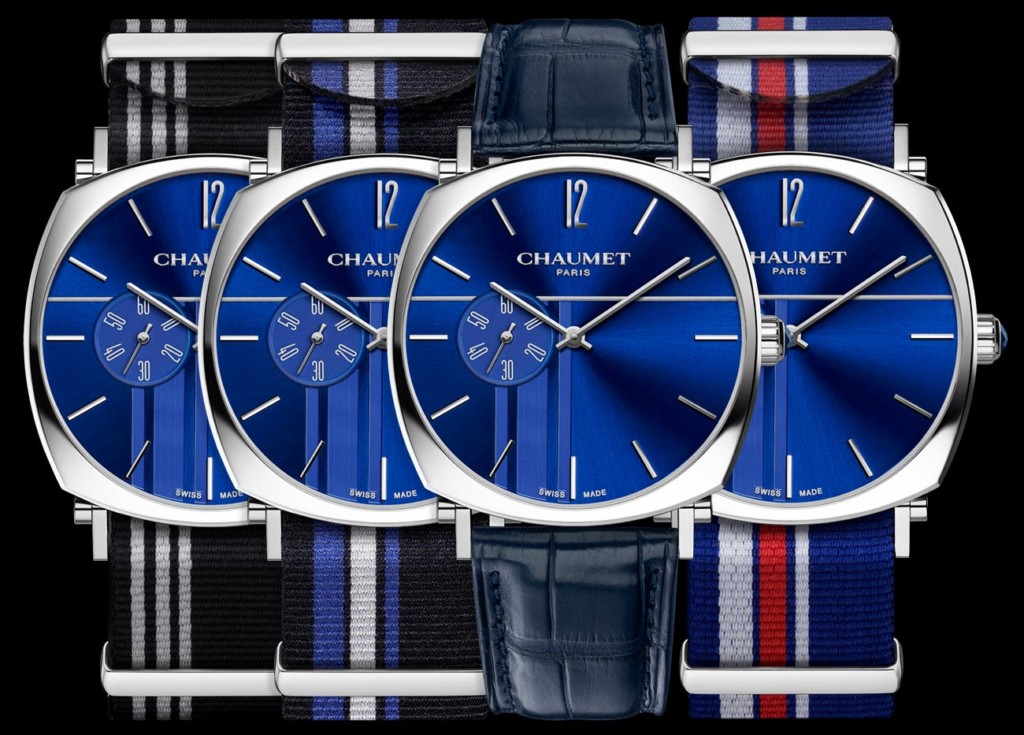 That is except for the blue dial model. This model adds some Arabic numerals to the seconds subdial and moves it to the 9 o’clock position, which I feel is an awkward place for it in the striping pattern. The inclusion of a slew of colorful NATO and leather straps makes me believe this is really aiming to feel sporty in nature, and I’m just having a hard time seeing it. The sunburst blue pattern is attractive, and the alternating matte striping looks cool against it, but with the thin baton handset, the thinness of the watch itself, and overall minimal design, I can’t help but feel this watch gets a little lost trying to find where it belongs. 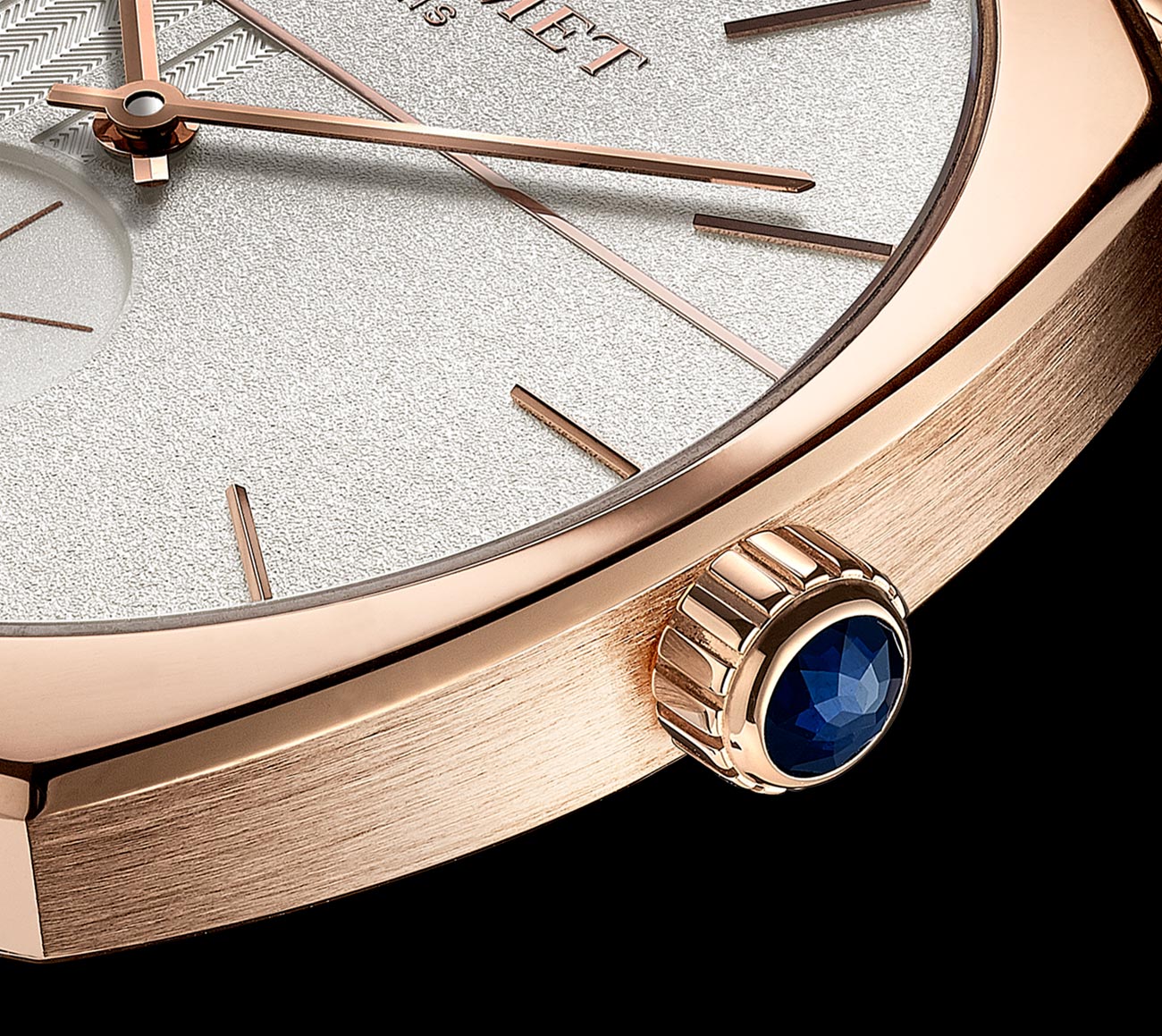 Inside the Chaumet Dandy beats a [REDACTED]. Jokingly “redacted,” of course, but neither the website, nor the brand’s own marketing, nor their reps are able to disclose what movements are actually inside the Dandy. Many targeted Google searches revealed that at some point they were unspecified ETA/Peseux three-hander variations – whether that’s still the case (it likely is), makes it a guessing game, or worse, an assumption. At least some of the Chaumet Dandy watches have exhibition casebacks (though no official images to be found). I would at least hope the movements are pristinely decorated since these watches are well into the 4- and 5-figure club.

At least, we know that the rose gold models with small seconds at 6 o’clock have a Swiss hand-wound movement operating at 3Hz with 17 jewels and a power reserve of 42 hours. This model has a solid, engraved caseback. The steel model has sub-seconds at 9 o’clock and an exhibition caseback with a Swiss automatic movement beating at 4Hz with a generous 50-hour power reserve, containing 27 jewels. Maybe a little crowd-sourcing from the audience can help. 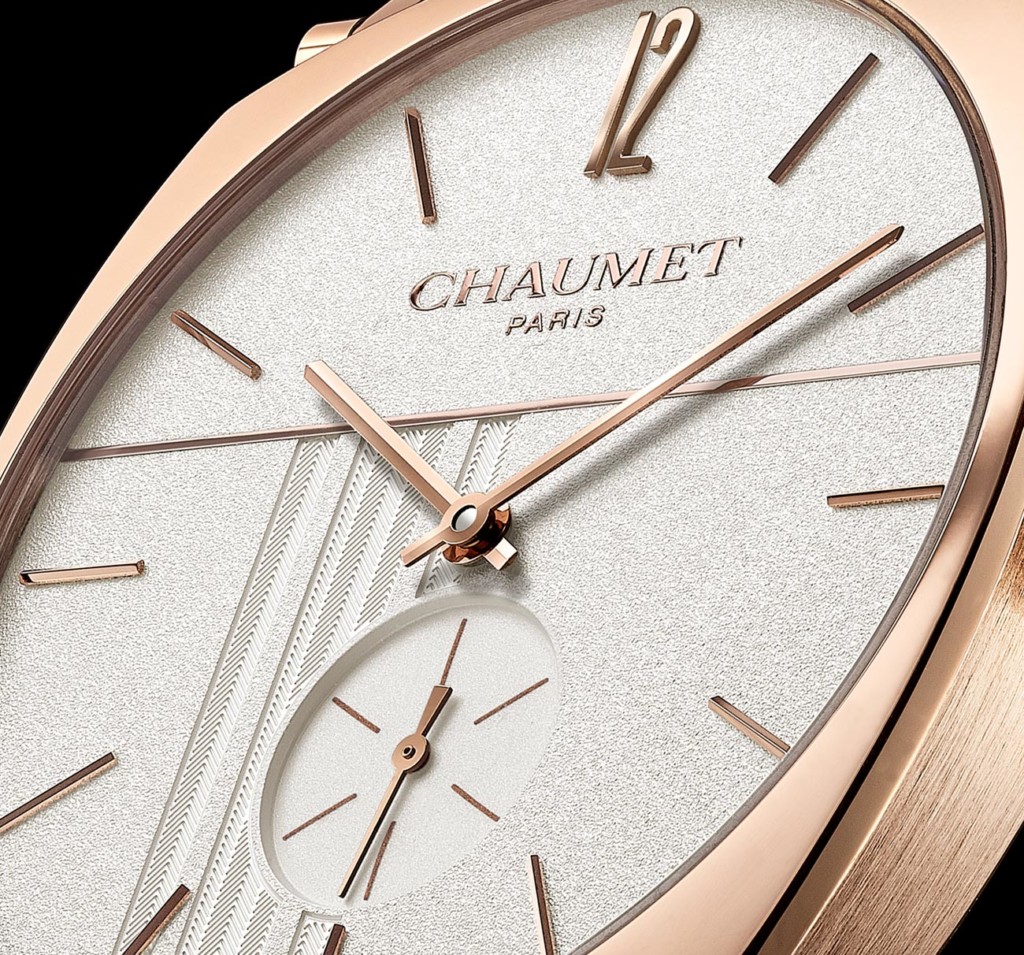 Overall these watches are charming and attractive, if not a bit… superfluous. I get the vibe that Chaumet spends their attention on high jewelry, and the men’s watch line is tacked on at the end because anyone spending time in a Chaumet boutique isn’t there for the watches. That being said, I don’t know that I would call these “fashion watches” either, in the sense that enthusiasts tend to use the term, as a bit of research shows these are superbly finished – as they should be coming from a jewelry company where a simple platinum ring requires the shopper to fill out a quote request form. 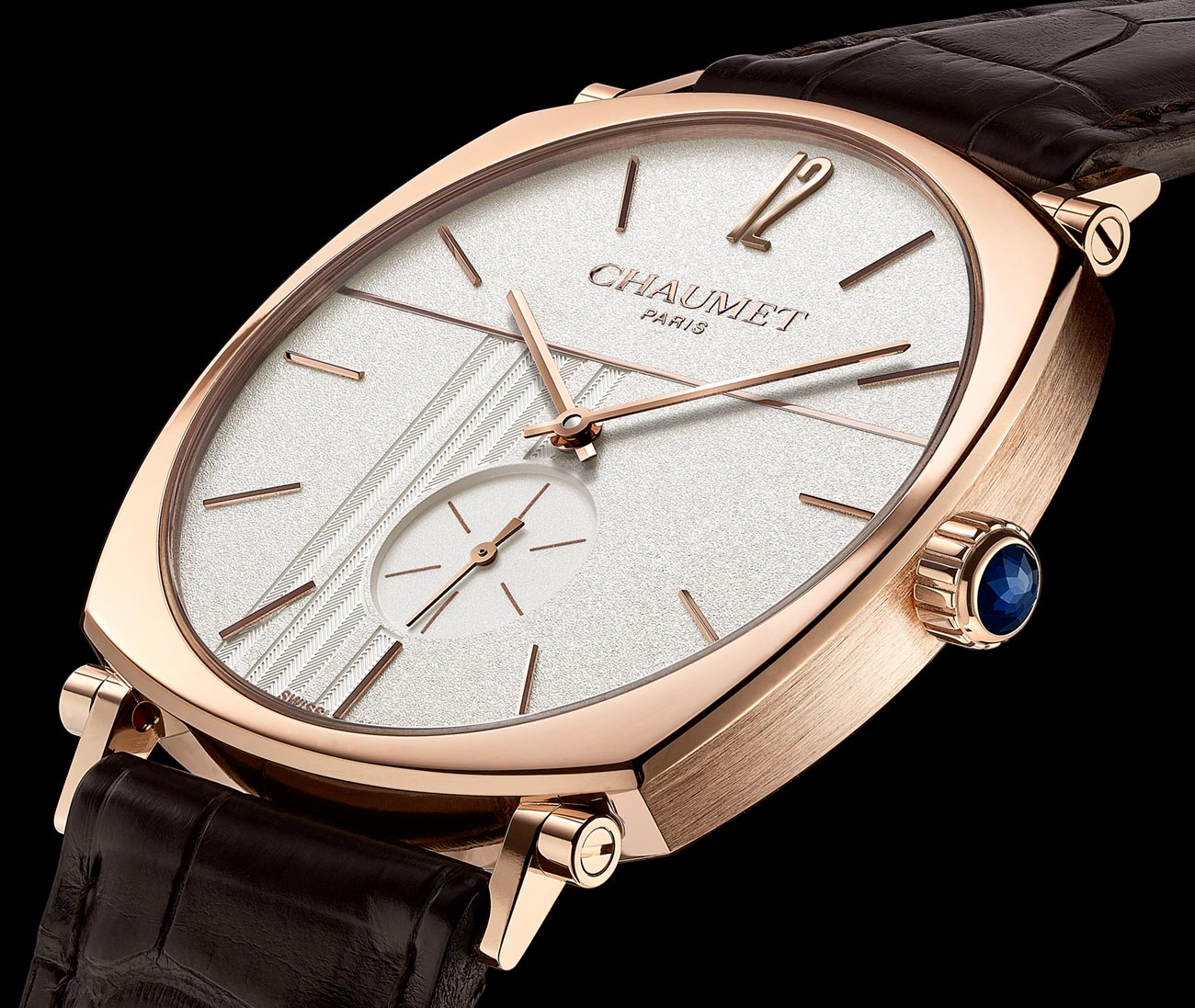 Additionally, it seems that Chaumet has included some pretty cool complications under the “Dandy Arty” designation in the past, including a metronome, centered bridges, and sapphire dial work. However, a scroll through the current collection shows fewer ambitious designs. For followers of the brand already, I suppose these are a simple cherry on top of a long marriage of fandom. For serious watch collectors and enthusiasts, information on the movement is severely lacking, and the Chaumet Dandy watches are in a very competitive price range. Price for both the cream (reference W11888-16C) and black (W11888-16N) dial Chaumet Dandy in rose gold is 14,100 GBP (currently $18,300-ish in USD) and price for the steel model (W11288-15B) is 4,600 GBP (roughly $6,000). Learn more at chaumet.com