For several years, Chopard has been faithfully honoring Mexican culture through an annual timepiece edition specially dedicated to the Day of the Dead festivities. For 2022, the manufacture had two other spectacular pieces join the Día de los Muertos watch on the occasion of SIAR 2022 — all three inspired by Mexican tradition and, more specifically, the endless possibilities that come from the Calavera skull symbol. Enter the Chopard L.U.C Full Strike Día de los Muertos minute repeater, Chopard L.U.C Quattro Spirit 25 TimeForArt Edition, and Chopard L.U.C Skull One Calavera Pop Art watches, each produced at Chopard’s facilities in Fleurier and Geneva where the brand develops, manufactures, assembles, decorates and certifies all its timepieces. 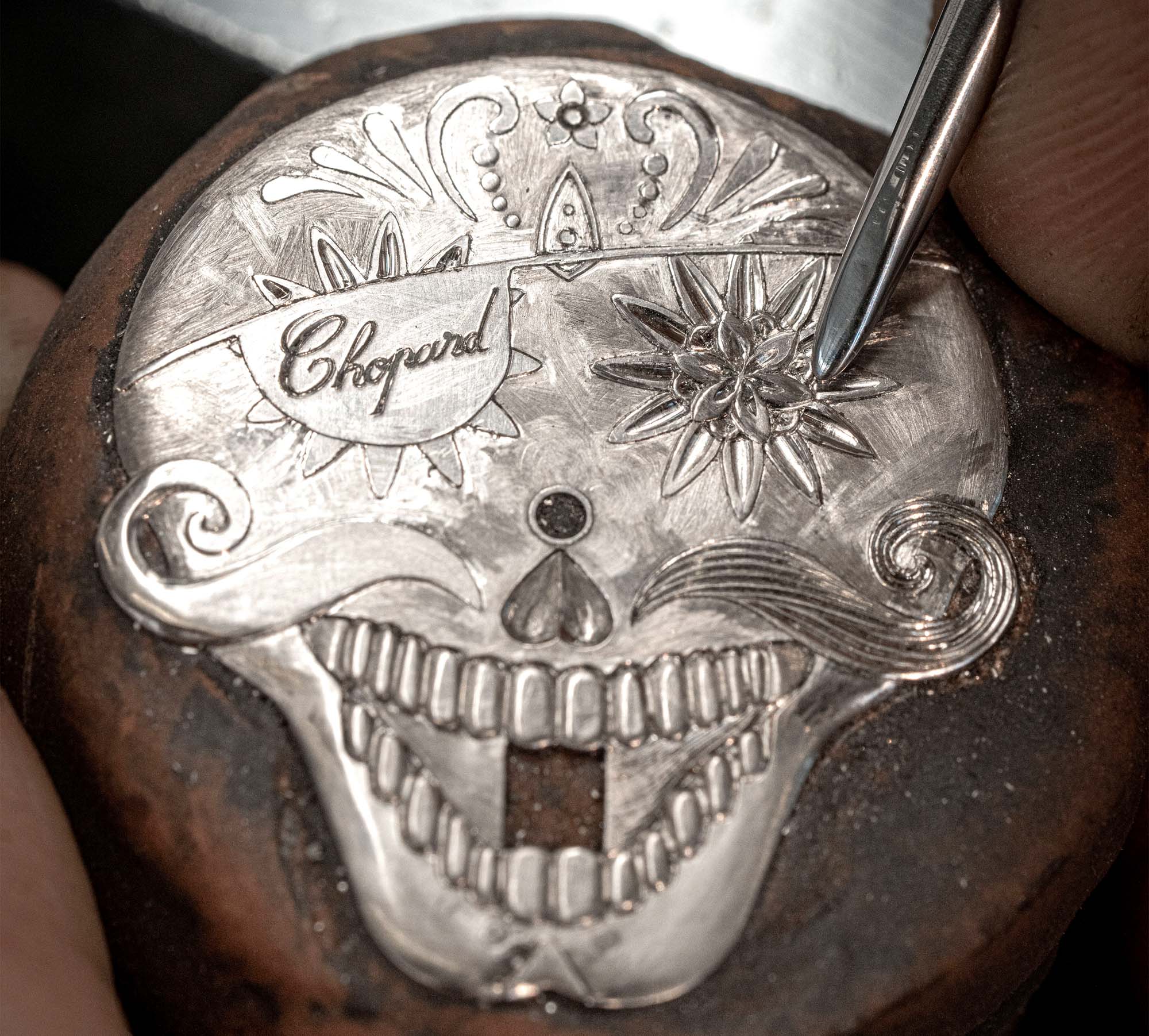 Recognized as one of the loudest and best-sounding minute repeater wristwatches ever conceived, the Chopard L.U.C Full Strike has revolutionized the harmony and volume of chiming watches. Chopard’s engineers and watchmakers conceived a movement whose hammers would not be striking traditional metal gongs, but rather a specially shaped, monoblock sapphire crystal. The crystal that protects the watch and the solid gold dial from the front extends all the way down, alongside the profile of the case, and has resonators incorporated into its shape. As a result, the entire front of the watch acts as a speaker — a speaker that faces towards the wearer, and not their wrist — resulting in an incredibly rich and powerful sound. 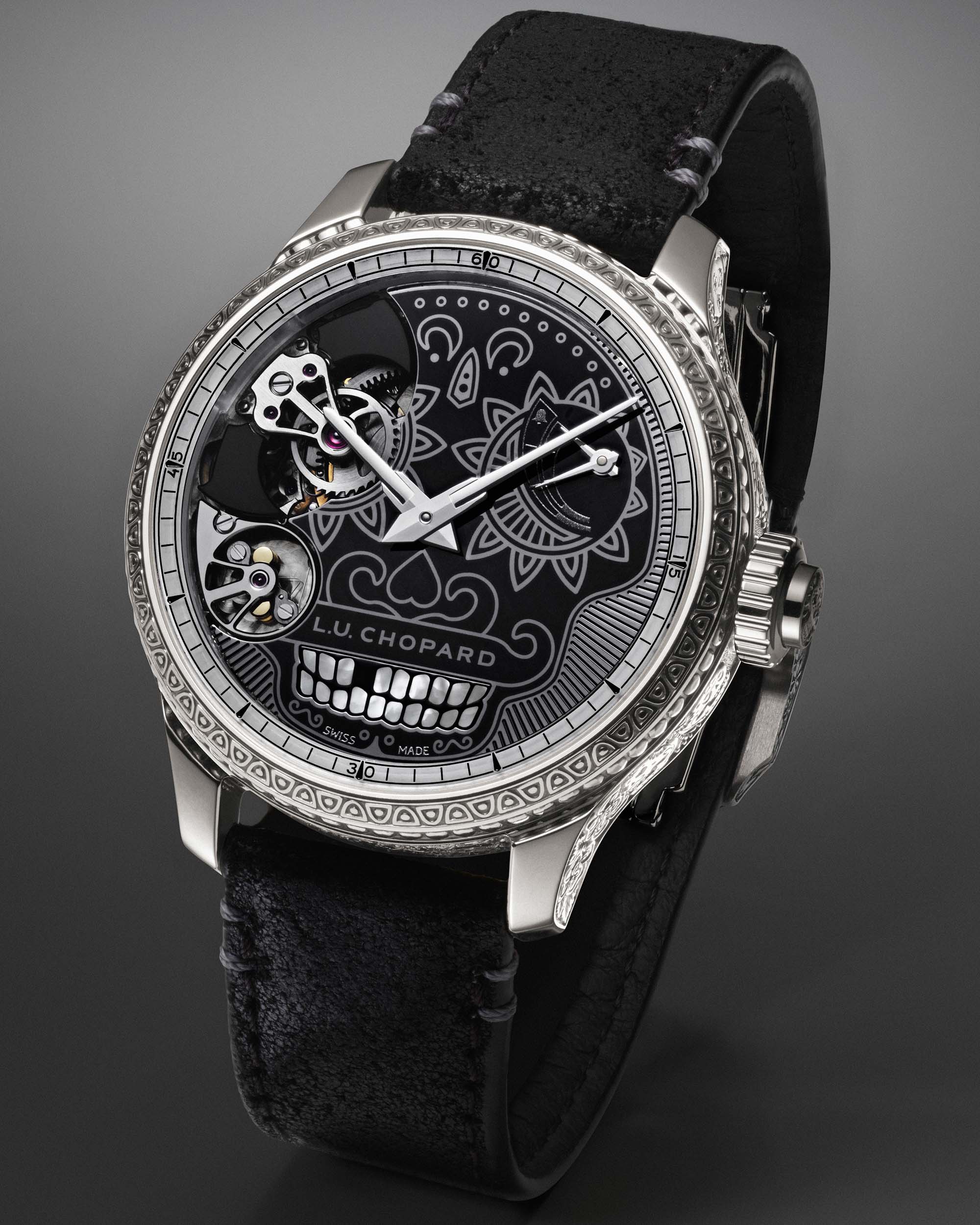 This mastery is met with mystery in the L.U.C Full Strike Día de los Muertos minute repeater: The hammers, visible at the 10 o’clock position on the dial side, have been blackened to match the theme of the Day of the Dead. The movement’s visible elements have been incorporated into the skull’s features: The ratchet wheel that drives the hammers lines up perfectly with the left eye, while the concentric power reserve indicator — which indicates the remaining reserve for both the timekeeping and chiming functions — with the right. The finishing touch comes in the form of champlevé motifs, as well as two rows of delicate mother-of-pearl plates, hand-set to form the quirky gap-toothed smile of the Calavera. 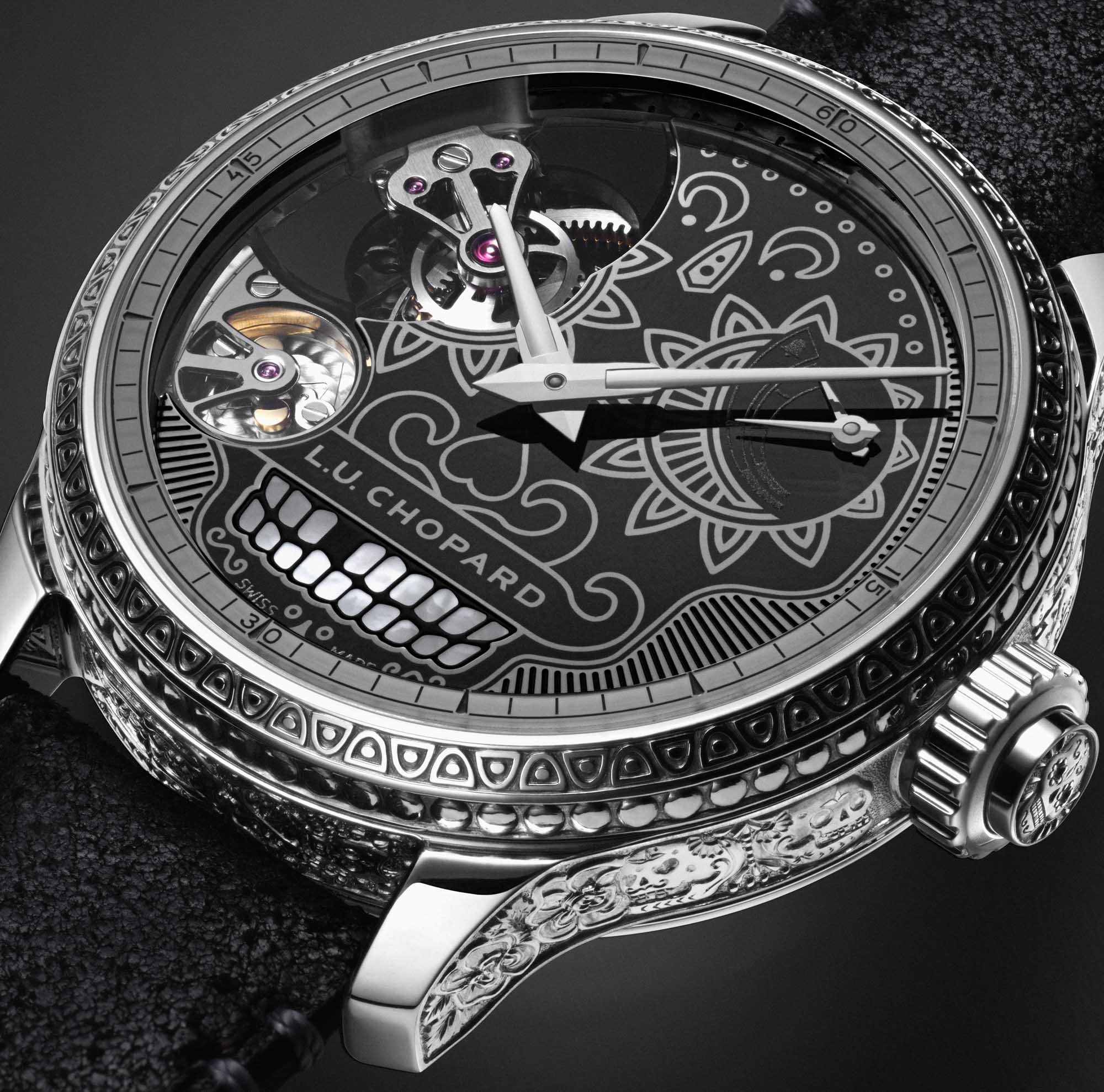 This one-of-a-kind creation comes in an 18k white gold case — crafted from ethically sourced gold — with entirely hand-engraved and blackened details. The delicate pattern runs across the case profile and bezel, curved surfaces that pose an immense challenge to the engraver, testing their dexterity to the fullest. Even the crown is engraved with the nuanced details of a Calavera skull, including its grinning smile and traditional decorative patterns. 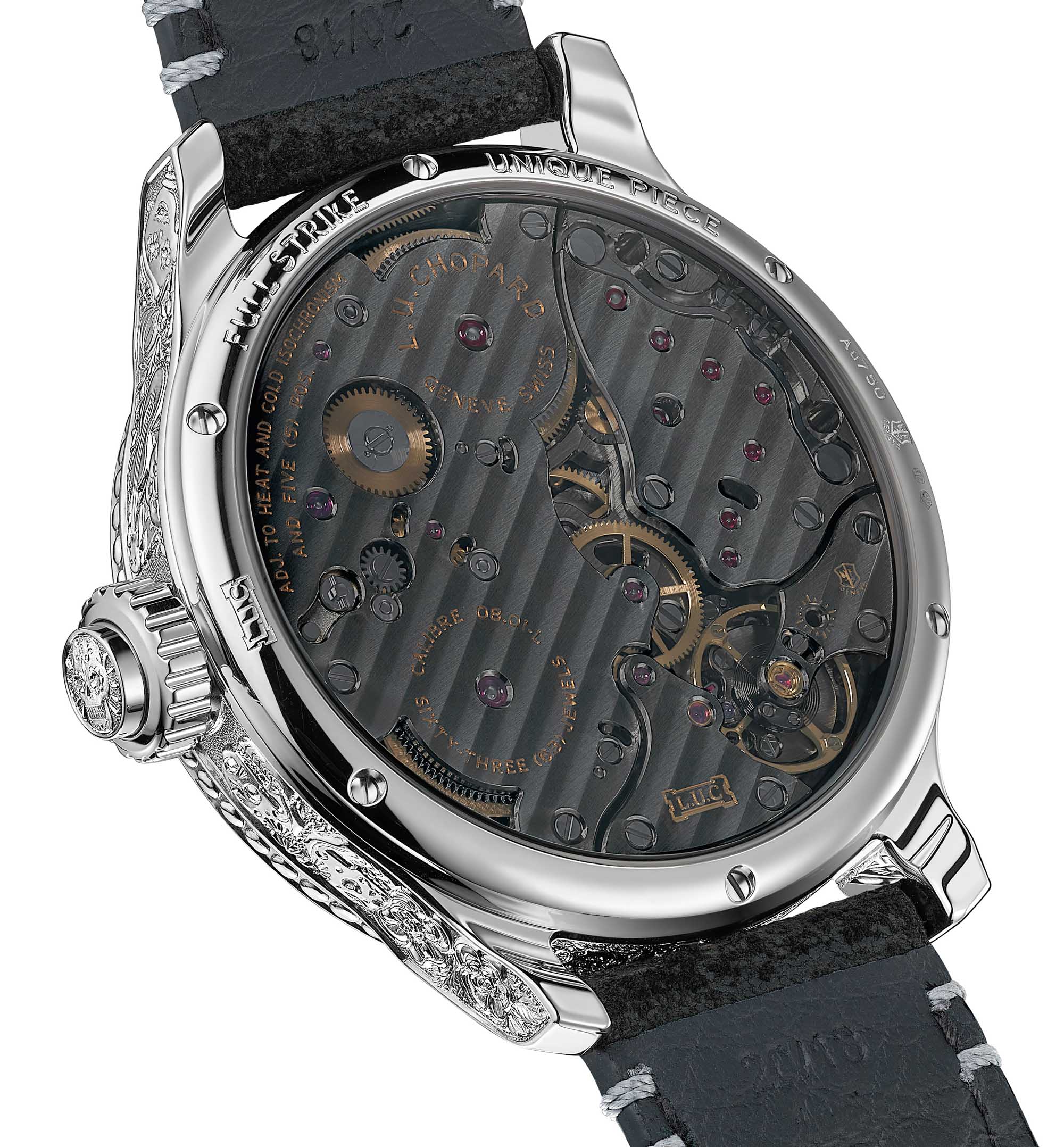 The darkened caseback reveals an immense movement that measures 37.20mm in diameter — considerably larger, but not much thicker, than more ordinary calibers. This hand-wound L.U.C 08.01-L movement comprises 533 components, 63 jewels, operates at a modern 4Hz frequency, and yet offers an extended 60-hour power reserve. It includes numerous ingenious engineering solutions that have been patented by Chopard, such as a specially developed variable-inertia balance, a clutch-lever safety device that blocks the strikework so as to avoid losing power reserve while striking information is being picked up, a dedicated ratchet-driving mechanism that eliminates pauses during chiming, and a strikework activation device that protects the mechanism from breakage if the pusher is pressed when the chiming is already in progress. 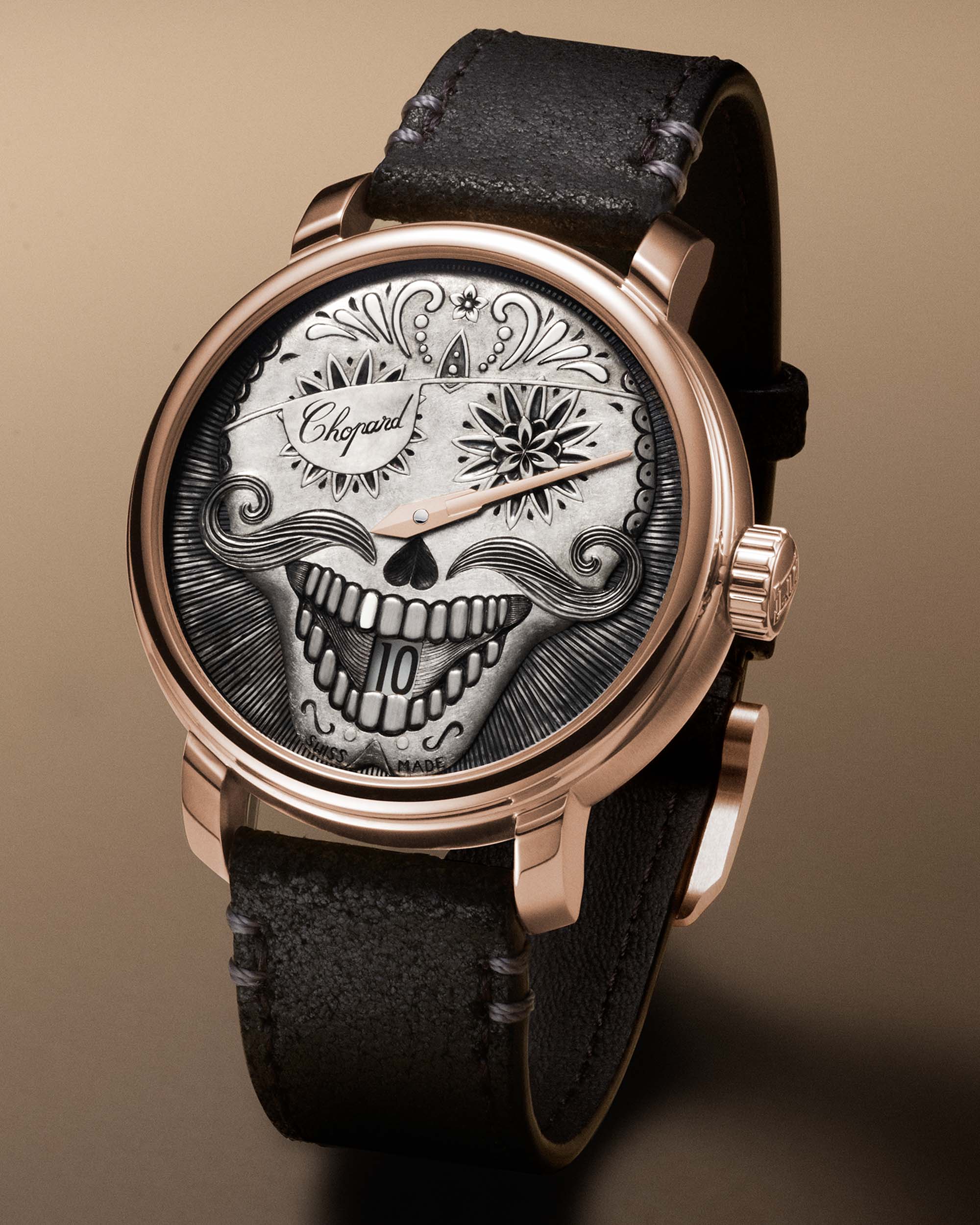 The skull theme continues on the Chopard L.U.C Quattro Spirit 25 TimeForArt Edition, a one-of-a-kind piece in ethical 18k rose gold. Characterized by just a single hand reaching across the dial, the Quattro Spirit 25 is equipped with a jumping hour complication, in this instance with a disc hidden inside the mouth of the skull, advancing at the end of the hour. This is made possible by the L.U.C 98.06-L caliber, a movement with four barrels — hence the name, Quattro — that provides no less than eight days of power reserve when fully wound. This exceptional construction also supplies the jumping hour display with the torque it requires: Chopard’s watchmakers had to engineer a way of advancing a disc at the end of an hour, which is considerably more challenging from an energy-management standpoint in a mechanical movement than it is to continuously drive an hour hand. 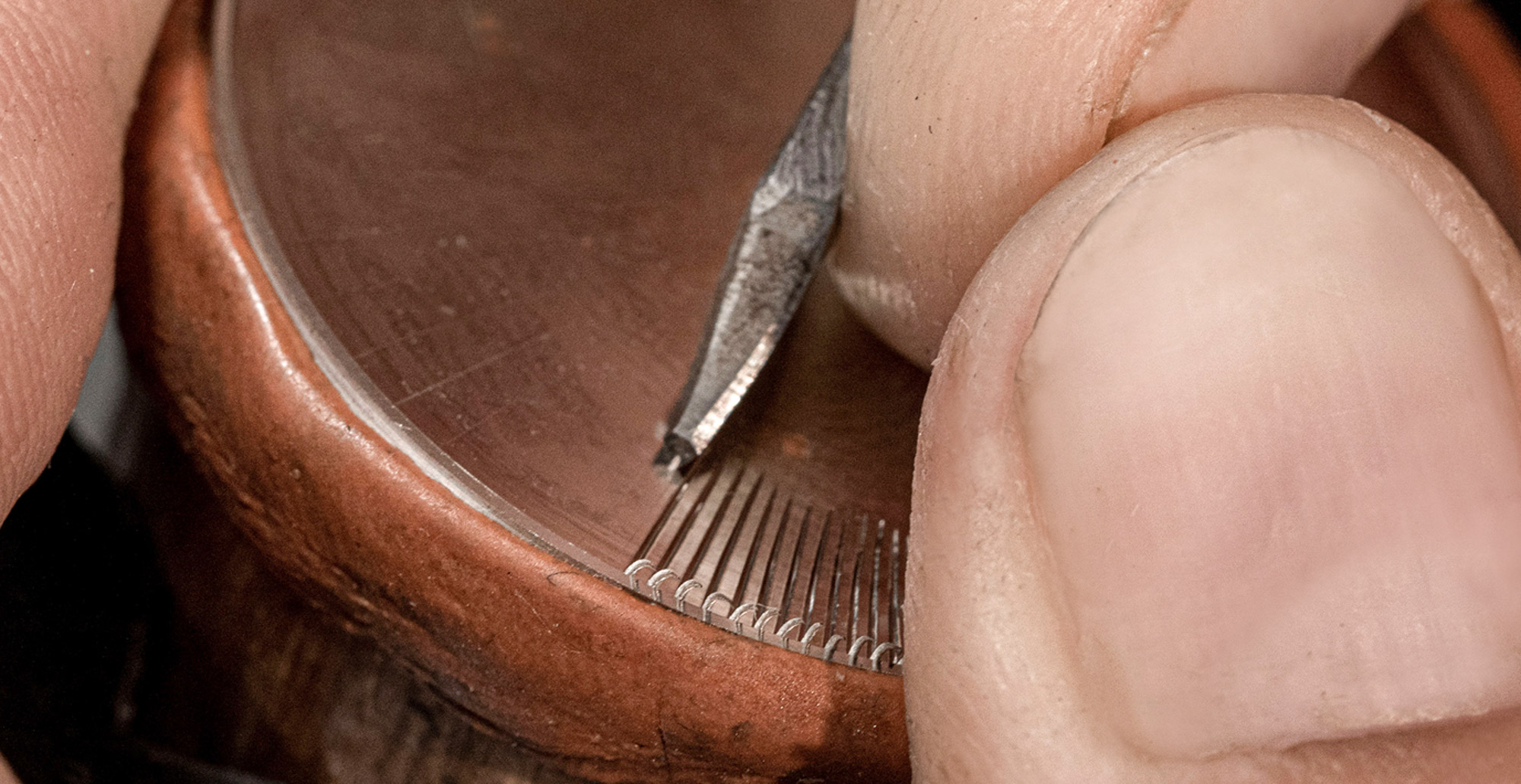 Painstakingly engraved by hand, one line at a time, this unique dial is one to be remembered as a testament to the craftspeople’s skills at Chopard. The face of the Chopard L.U.C Quattro Spirit 25 TimeForArt Edition watch is constructed from two main parts: a three-dimensional skull with its facial features and decorations in relief inspired by the “vanitas” theme, and a base plate, also in solid gold, with hundreds of individually chiseled lines, again paying tribute to traditional Mexican decoration themes forever linked to the Day of the Dead. These regular concentric lines evoke sunbeams lighting the path of the dead to facilitate their return to Earth. 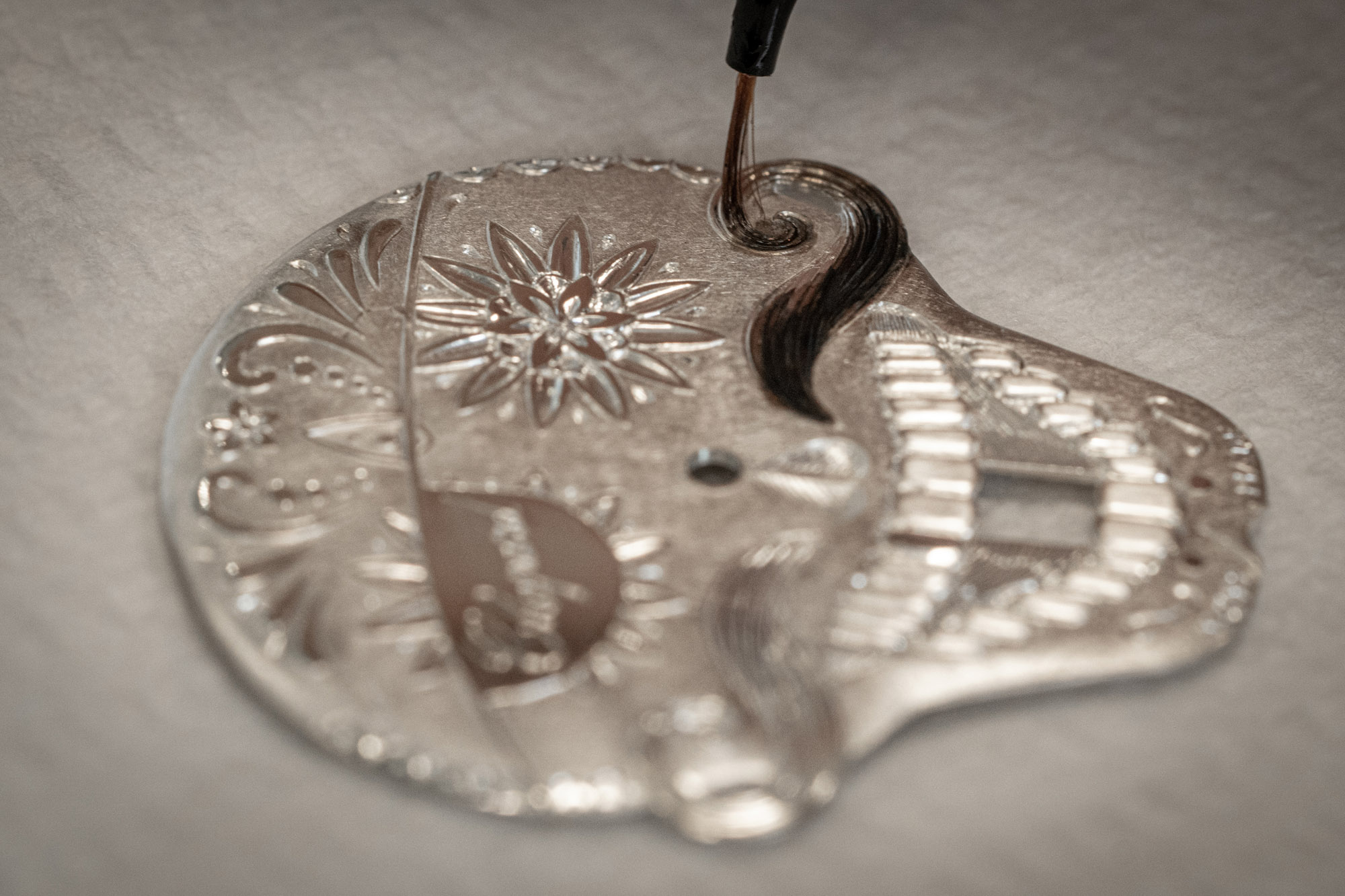 The Calavera is satin-brushed with fiberglass, while other dial decorations are hand-polished using boxwood sticks coated with polishing paste. The petals of the flowers surrounding the orbits are given a shiny exterior using diamond pate, while their interior is endowed with a matte effect to recreate the depth of the cavity. Finally, the engraver coats the dial surface with a thin layer of silver, which is oxidized with ether to blacken the hollows and accentuate the patterns. 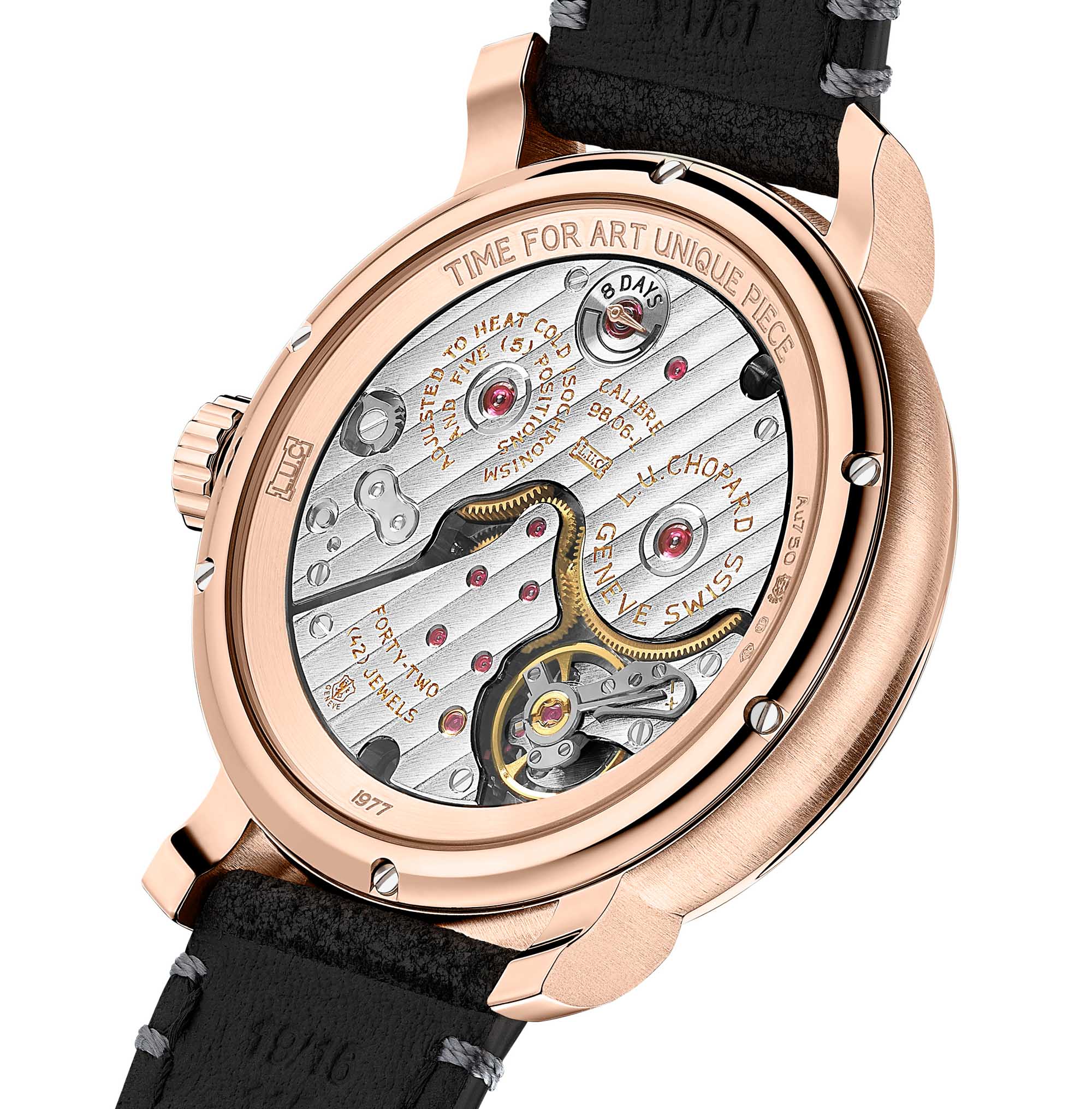 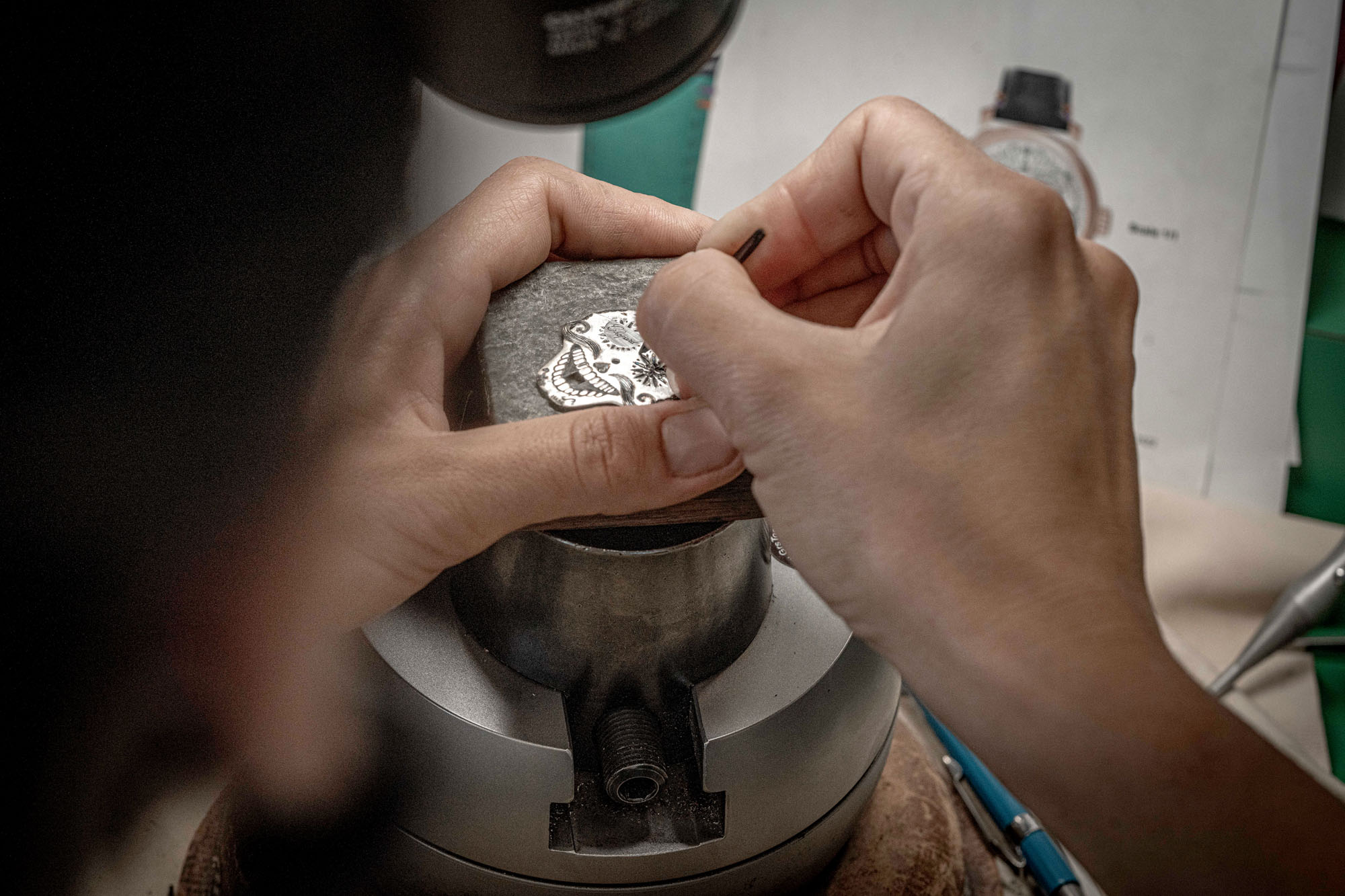 Patience, constancy, and meticulous care were essential in the creation of this dial, which took four weeks to complete. From the movement to the dial, this entire pièce unique is produced in-house by Chopard, in keeping with the tradition of artistic crafts. The piece will be part of the TimeForArt event, an auction of exceptional watches, with 100% of the proceeds going directly to support some of the world’s most visionary contemporary artists through the Swiss Institute’s exhibitions, public education programs, and free community engagement workshops. TimeForArt provides a year-round platform for exchanges between the world of watchmaking and the visual arts. 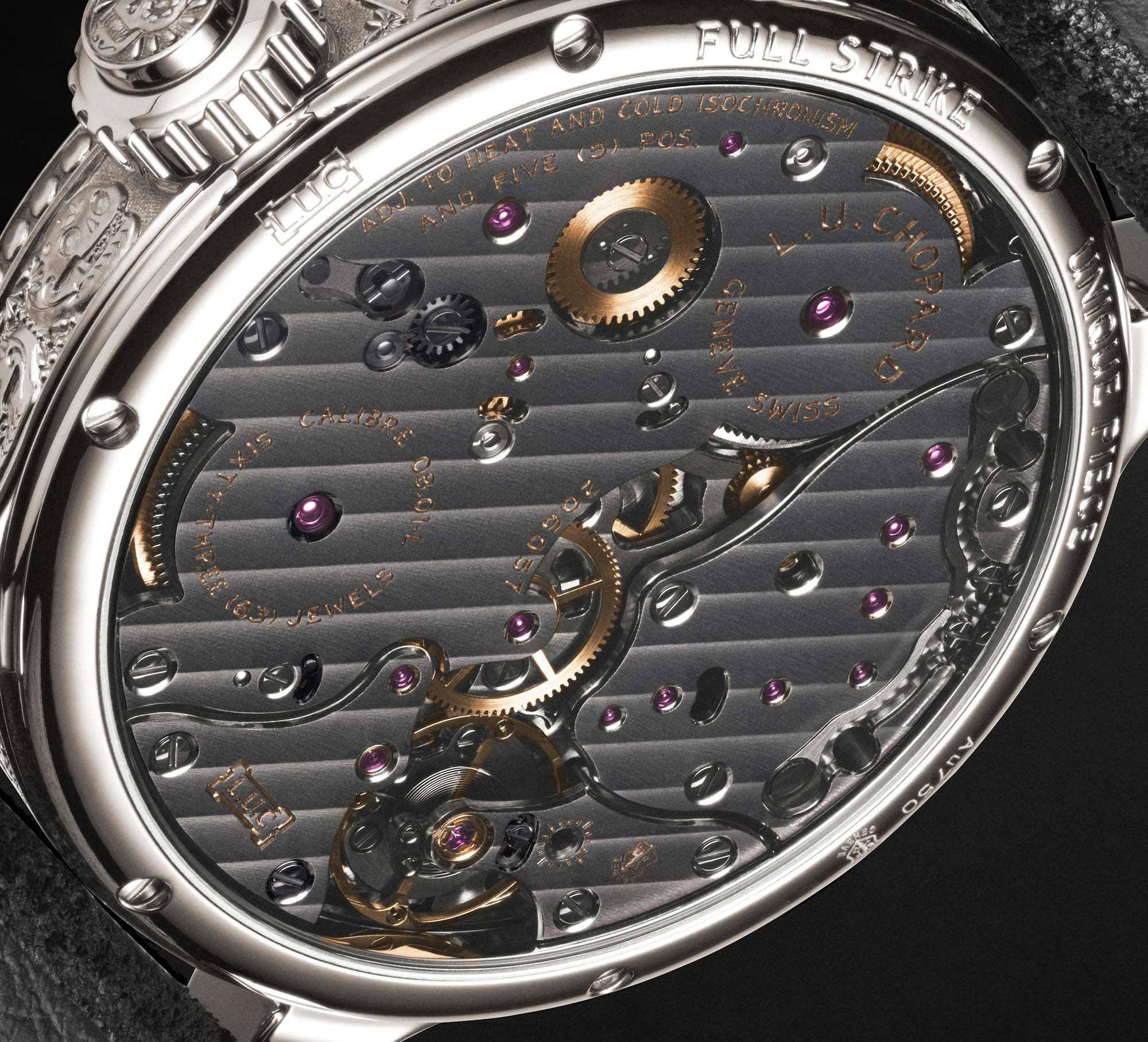 Both the L.U.C Full Strike and the Quattro 25 pieces boast Poinçon de Genève-certified finishing. Governed by strict criteria of excellence, this highly coveted label guarantees not only the quality, precision, and reliability of the movement and the watch as a whole, but also ensures that the assembly was carried out in the canton of Geneva, the historical cradle of Fine Watchmaking. Also known as the Hallmark of Geneva or Geneva Seal, this distinction is awarded exclusively to those watchmaking creations whose beauty provides the perfect setting for a flawlessly functioning mechanism. 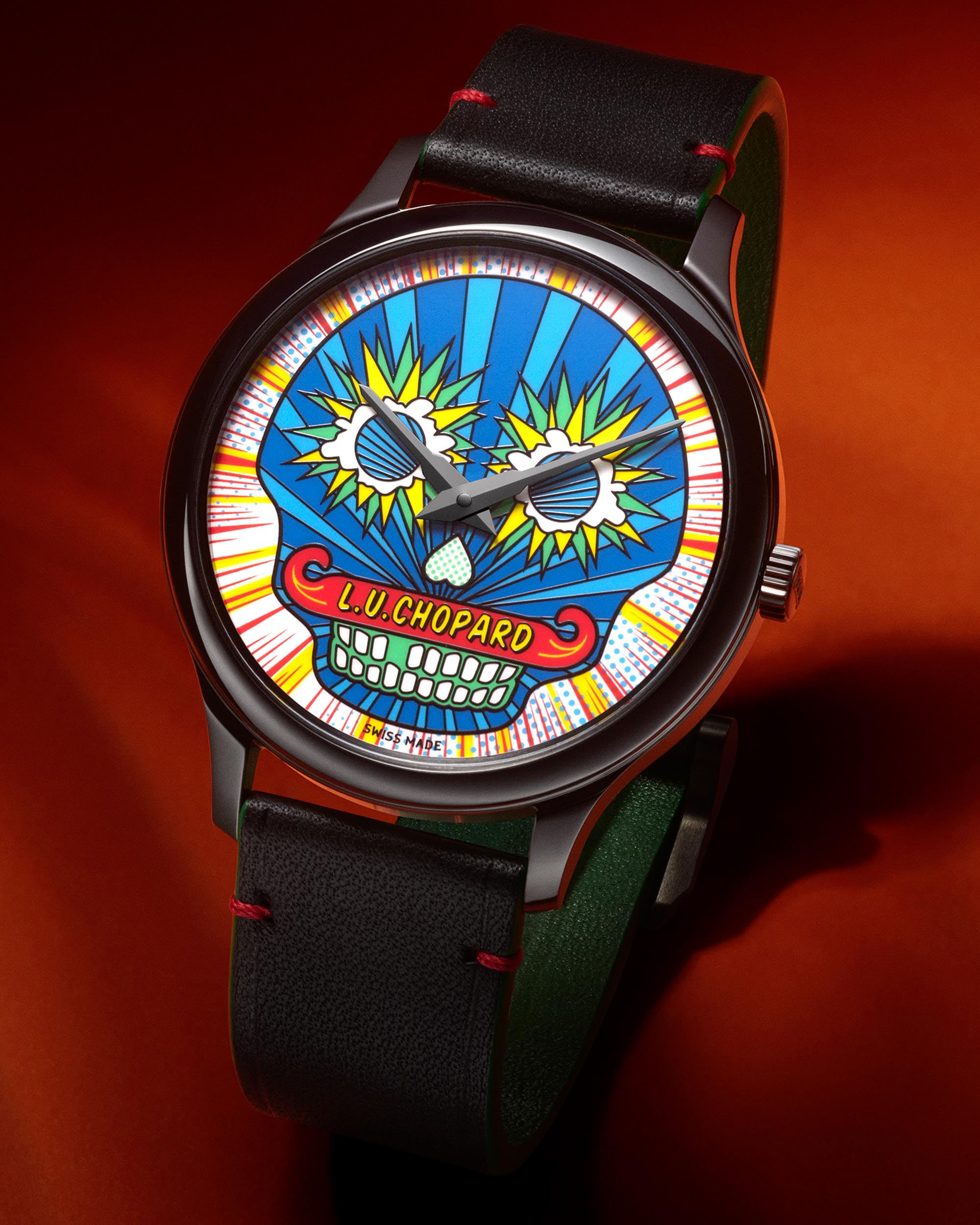 The third watch in the L.U.C Skull One series is an exclusive collection inspired by Día de los Muertos, titled Chopard L.U.C Skull One Calavera Pop Art. At the center of this 25-piece limited edition, which captures the Maison’s creativity and imagination, is a Pop Art-inspired Mexican Calavera, the skull symbol associated with the annual Day of the Dead festival. Elegantly visualized by Chopard’s artisans, the dial features a transferred skull motif in punchy hues of blue, red, orange, green, and yellow, providing the piece its namesake Pop art style. 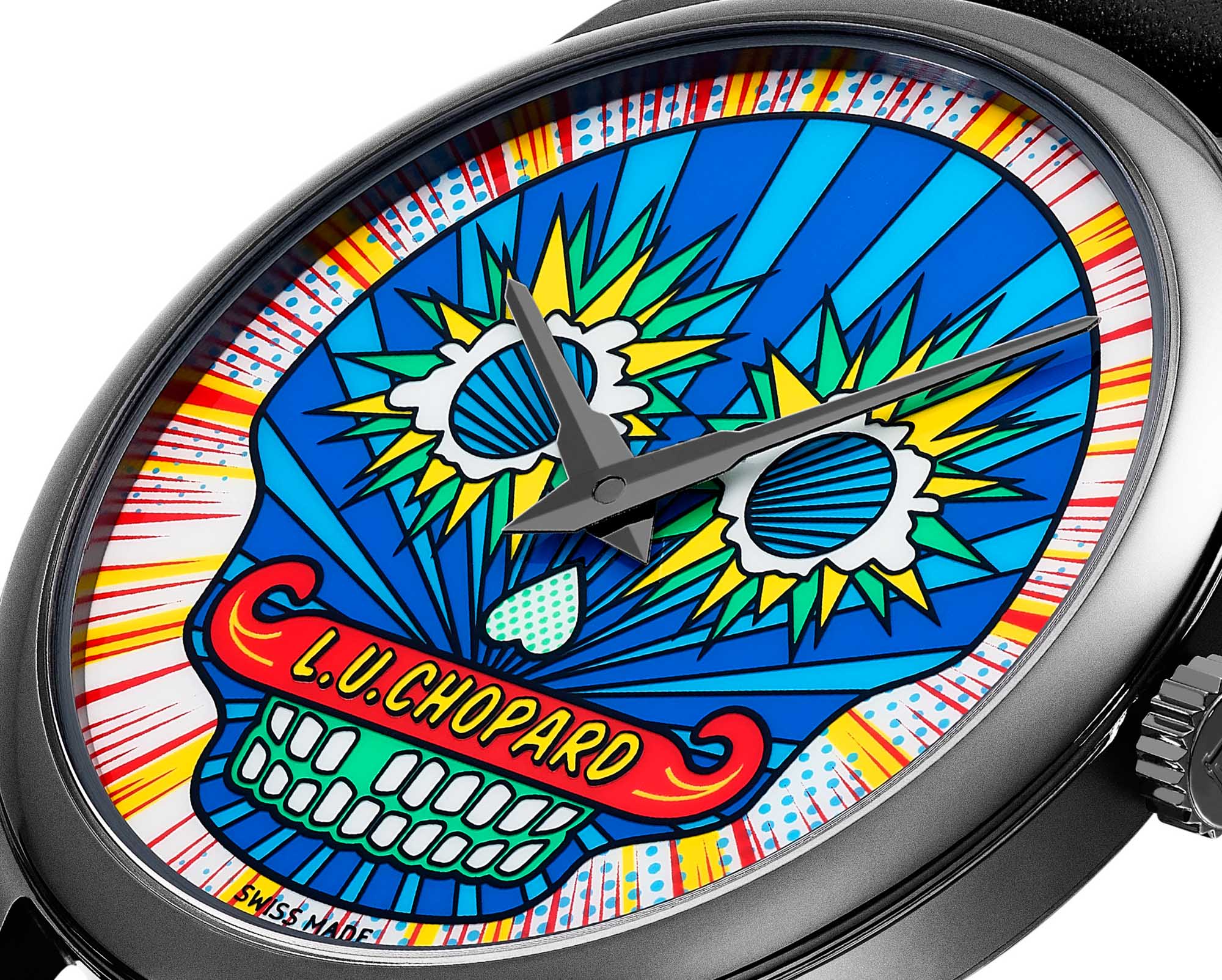 Even the mischievous mustachioed L.U.Chopard logo, which recalls the Maison’s founder Louis-Ulysse, has been given a kitsch look reminiscent of Day of the Dead motifs. This spectacular dial stands in stark contrast with the black DLC-coated stainless steel case. Exceptionally thin, elegant, and comfortable to wear, the case measures just 7.2mm in total thickness, courtesy of the L.U.C 96-53-L self-winding movement that is just 3.30mm thick. Despite its compact architecture, it provides an extended, 58-hour power reserve combined with a tungsten alloy micro-rotor and a modern 4Hz operating frequency. Bold, powerful, and sophisticated, the Chopard L.U.C Skull One Calavera Pop Art makes for a splendid tribute to the festivities.

From two brilliant unique pieces to a highly exclusive 25-piece limited edition, Chopard has introduced a trio of highly refined timepieces, all paying homage not only to the Day of the Dead but also to the manufacture’s impressive in-house know-how in the fields of movement development and production, as well as the traditional crafts of hand engraving and painting. You can learn more at the brand’s website.