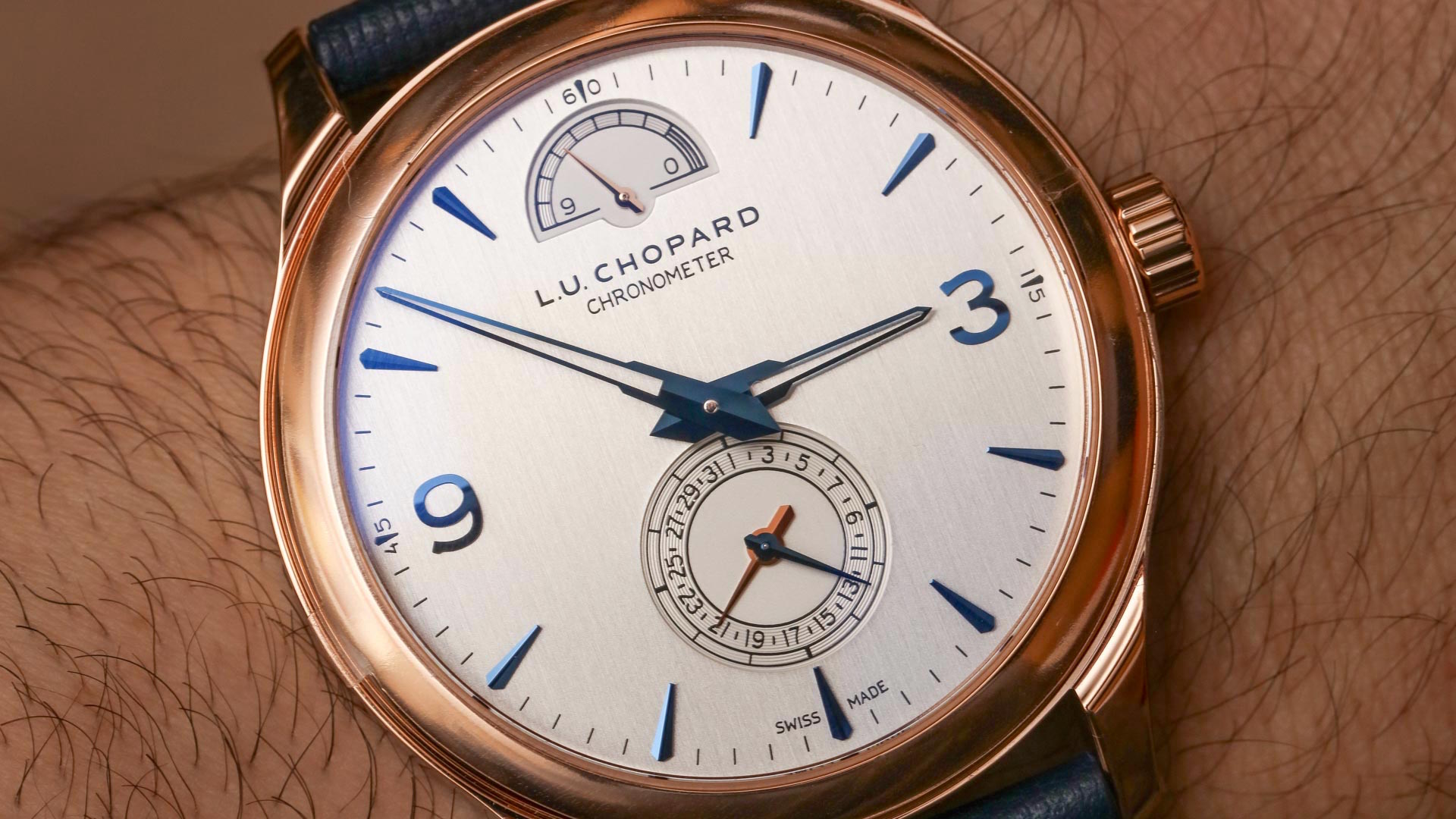 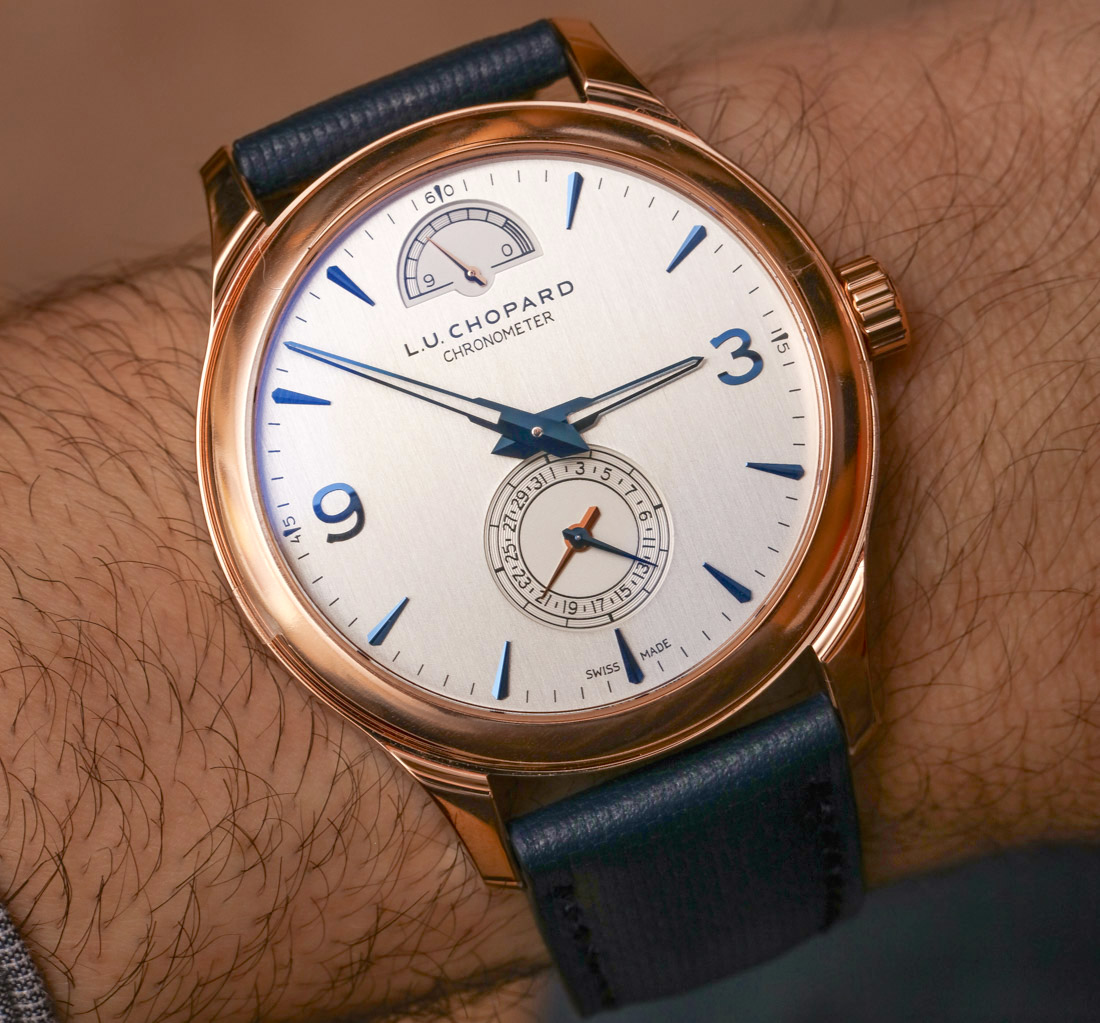 When I think of high-end Swiss watchmakers, I must admit I tend to overlook Chopard. The so-called “Big Three” tend to get the most attention in this space; Vacheron Constantin, Audemars Piguet, and Patek Philippe, all three steeped in history and accolades. But after seeing the new Chopard L.U.C Quattro Limited Edition watch for 2018, I’m putting this brand firmly on my radar; featuring both the Geneva Seal and COSC chronometer certification, as well as a 4-barrel (or “Quattro”) power reserve of 9 days, this is a timepiece offering some serious horological clout. 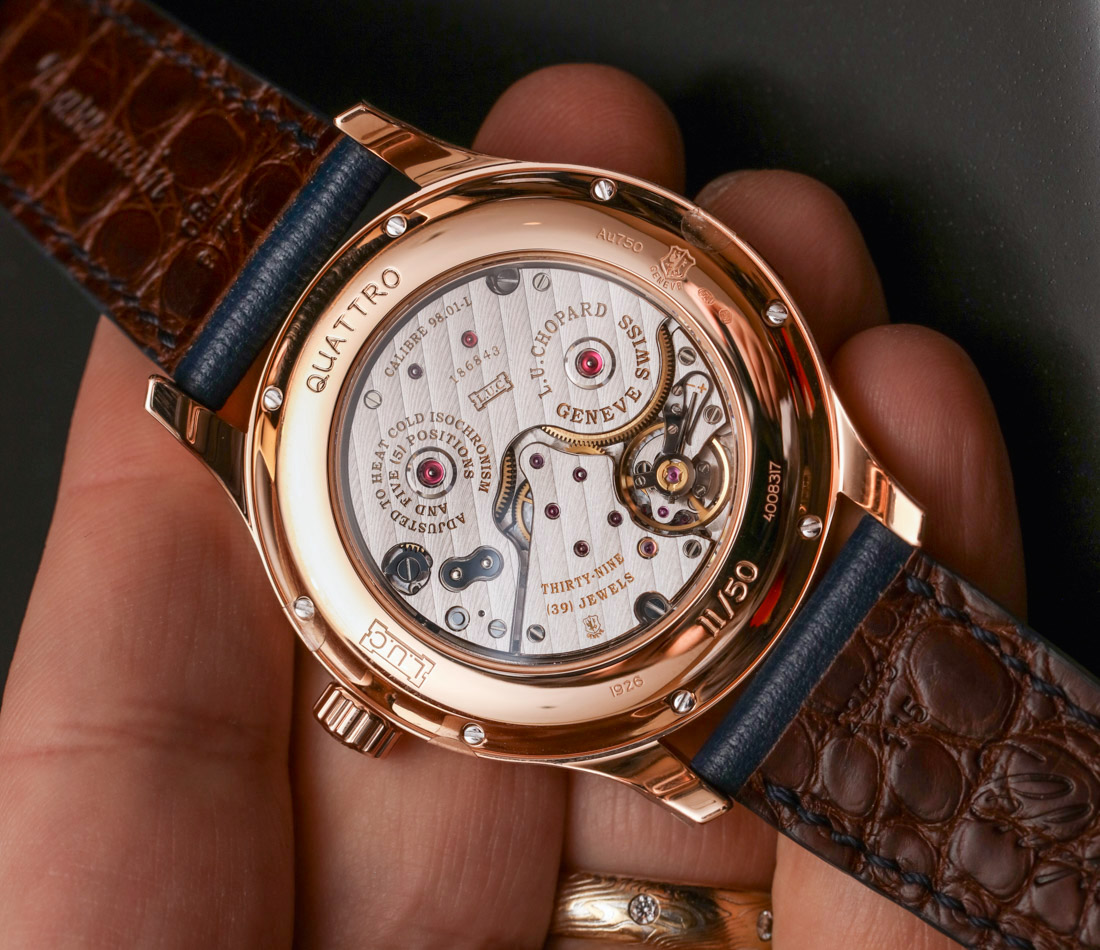 The Geneva Seal, or “Poincon de Genève” in French, is primarily a certification of origin and finishing; the watch must be assembled, adjusted, and cased-up in the Canton of Geneve, and every component of the watch must be finished to exacting standards. Since 2011 the Seal criteria was updated to also include a cyclotest of the watch functions, water and power reserve testing, and an accuracy test over 7 days, during which the watch must deviate by no more than a minute. As this is less strict than COSC’s -4/+6 seconds per day requirement, the brand have opted to double-certify the Chopard L.U.C Quattro Limited Edition to both standards. This might seem redundant, but it also makes a strong statement about the brand’s confidence in this watch. This is not just a finely-finished luxury item but also an accurate and reliable timepiece, making the Chopard L.U.C Quattro Limited Edition more suited to everyday wear than your typical dress watch. 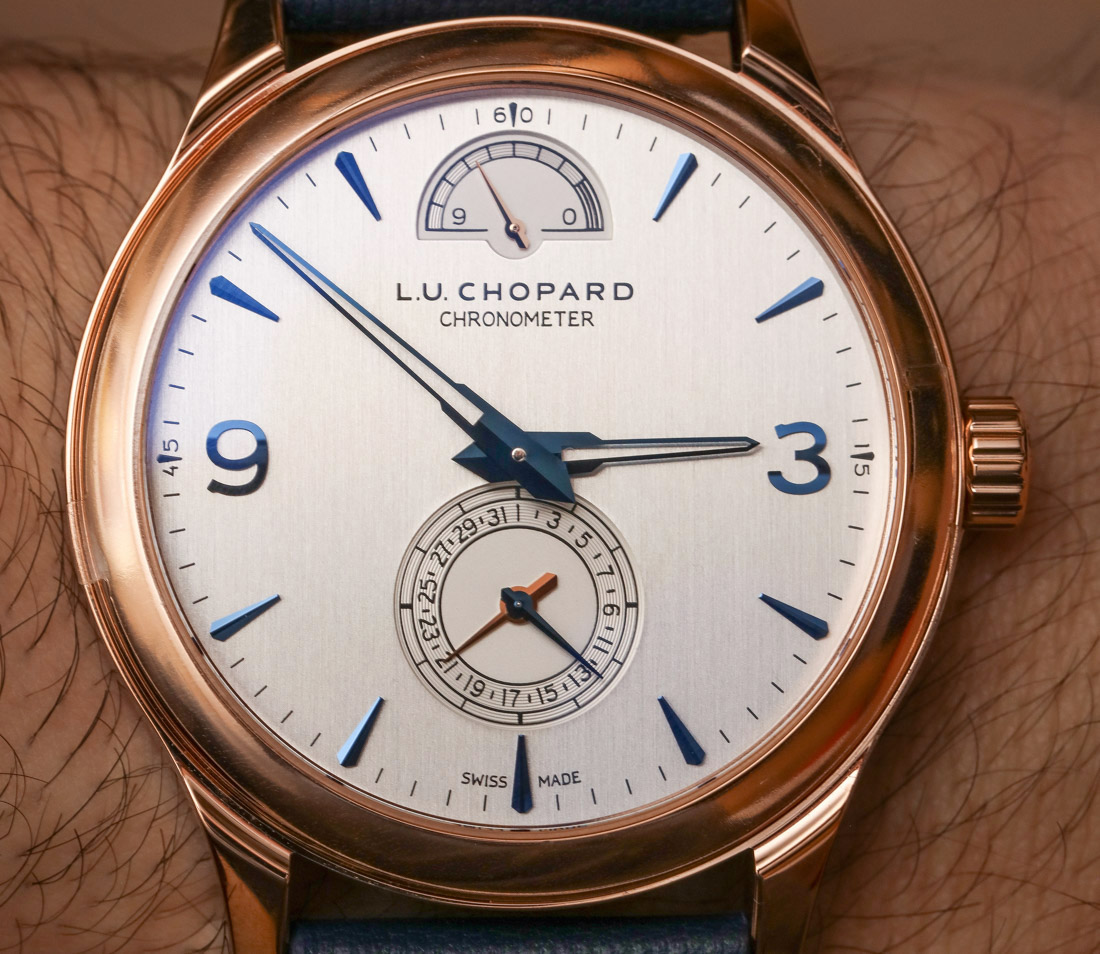 Another element I tend to associate with luxury Swiss watchmaking is history, and Chopard is no slouch in this regard either. Founded in 1860 by Louis-Ulysse Chopard, (whose initials name the L.U.C. collection), this is a company with more than 150 years of heritage. Unlike many of the conglomerated luxury brands which dominate the market, Chopard is still family-owned; Louis’ grandson Paul-André Chopard sold the business to a German watchmaker and goldsmith named Karl Scheufele III in 1963, and the Scheufele family still runs the brand to this day. This story is not greatly dissimilar to that of Patek Philippe, who pre-date Chopard by less than a decade and were sold to the Stern family in 1932. Although Chopard’s horological achievements over this period may pale in comparison to Patek’s, I feel the comparison still serves to solidify Chopard as a brand that can claim real history and continuity. 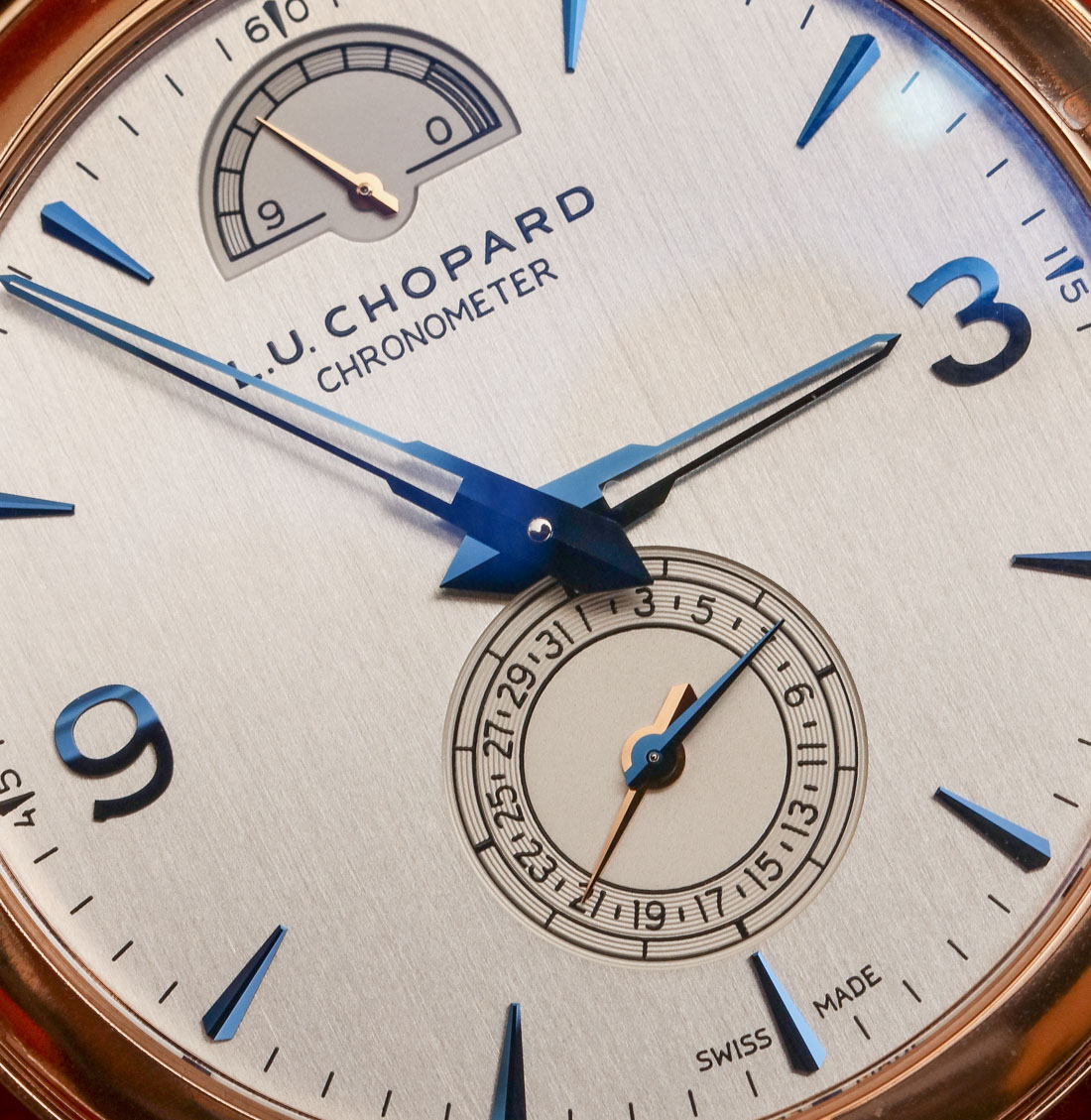 The Chopard L.U.C Quattro Limited Edition borrows some style cues from the brand’s L.U.C. XP watch (hands-on here), trading in the collection’s typical Roman numerals for blued Arabic numerals at 3 and 9 o’clock, blue faceted indices, and a much cleaner implementation of both the small second/pointer date sub-dial and the power reserve indicator. The color scheme of the hands has also been reversed; the brand’s signature “dauphine fusée” hour and minute hands are now blued, as is the baton-style small seconds hand, while the pointer date and power reserve hands are gold. The combined effect is very legible, although I’m not sold on the cutouts in the hour and minute hands. At a glance they appear to be coated in Super-LumiNova due to the silvery white dial being visible beneath, a look I immediately associate with more sporty watches. 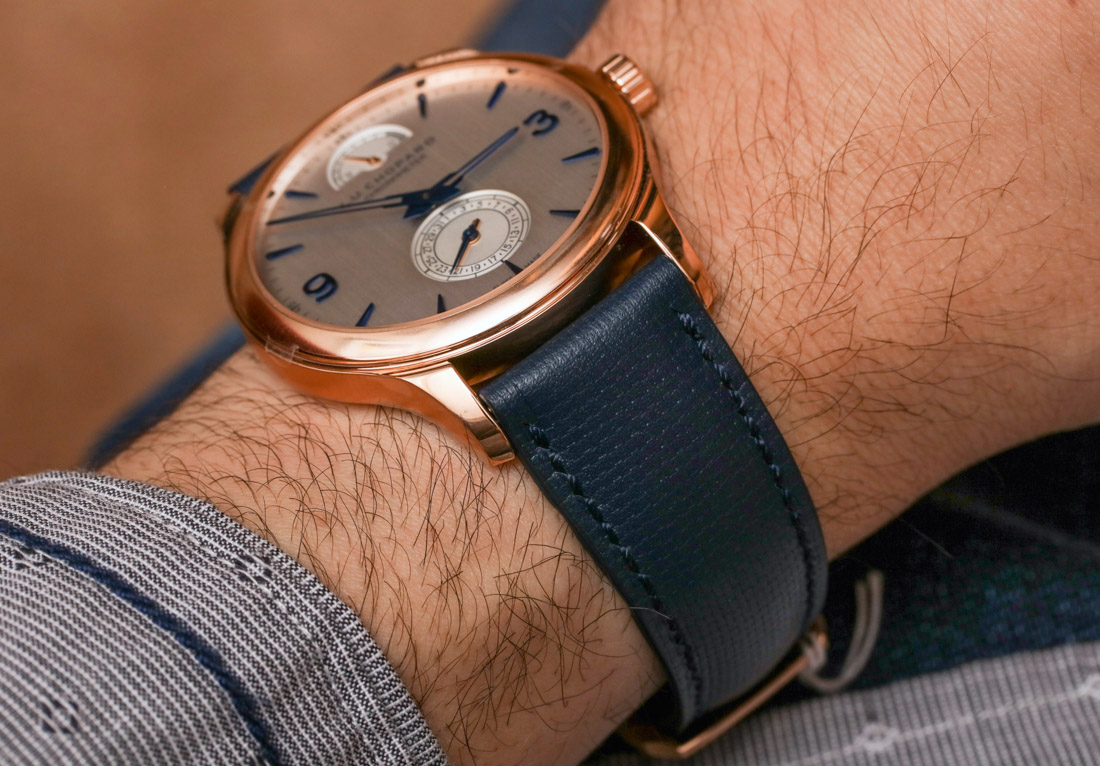 Normally I’m very critical of “dress watches” with cases bigger than 40mm, especially those with vintage or retro design cues. That being said, the 43mm, 18-carat rose gold case on the Chopard L.U.C Quattro Limited Edition seems to actually be just about the right size. It’s suitably slim at 8.84mm, the curved lugs help the case hug the wrist, and the more casual styling in this version helps the larger-than-usual case feel modern. The bezel and lugs are polished, while the caseband is vertically satin-brushed, which ties in well with the brushed dial. Glare-proofed sapphire crystal covers both the dial and caseback, and the watch is water-resistant to the quite respectable depth of 50m; dressy watches of this echelon all too frequently offer 30m or less. The included leather strap is a mixture of blue calfskin leather with brown alligator leather lining and an 18k rose gold pin buckle, whose overall appearance is not dissimilar from the cashmere strap used on the L.U.C. XP, striding a middle ground once again between dressy and casual. 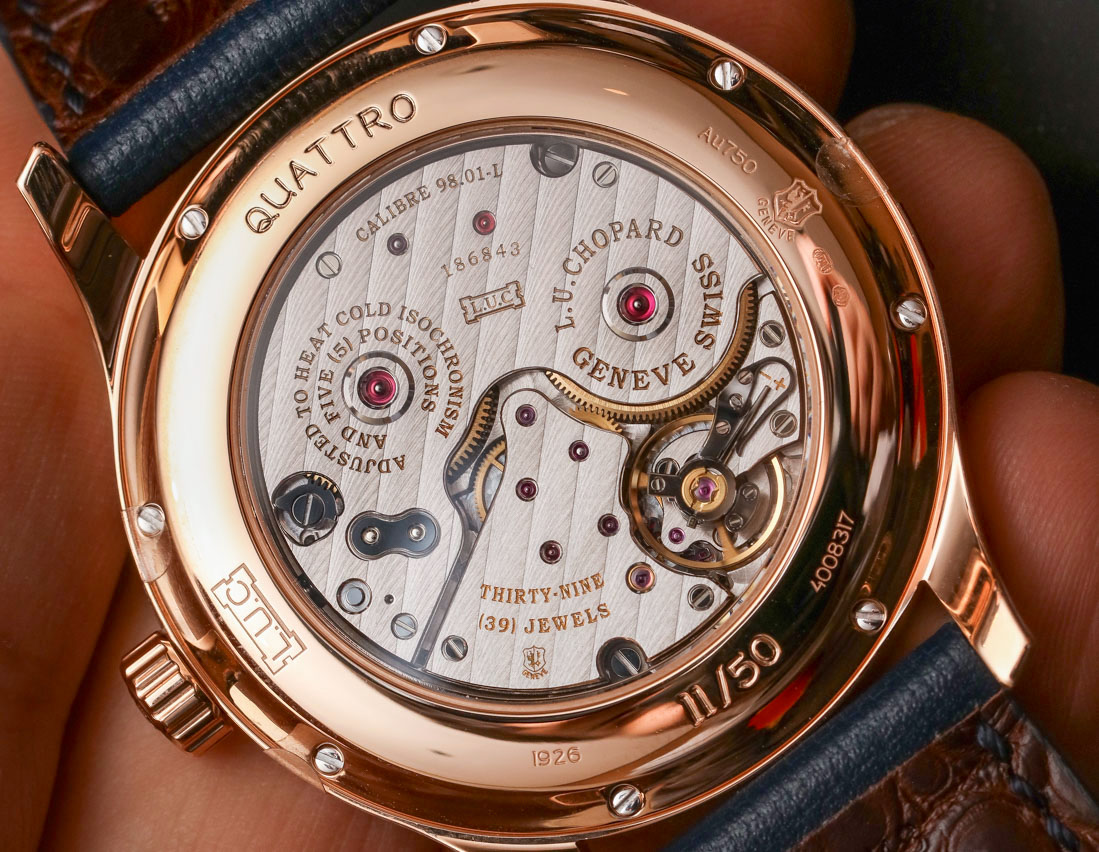 The case-back is also polished and hand-engraved with “QUATTRO” at 12 o’clock and the individual serial number at 6 o’clock, and also features the Geneva Seal at 3 o’clock. The in-house L.U.C 98.01-L calibre shows off a second Geneva Seal on the bottom-most bridge, and is finished accordingly; chamfered edges, Geneva stripes, and polished screw-heads abound. The quality of the Geneva striping is particularly noticeable, achieving a highly uniform appearance comparable to one of A. Lange & Söhne’s three-quarter plates. The two sets of stacked barrels correspond with the raised jewel bearings near the top of the movement, each encircled with rings of golden text which denote the level of adjustment, brand and manufacturing locale of the calibre. This movement oscillates at the very modern frequency of 28,800 vph (4Hz), making the 9-day power reserve figure even more impressive. 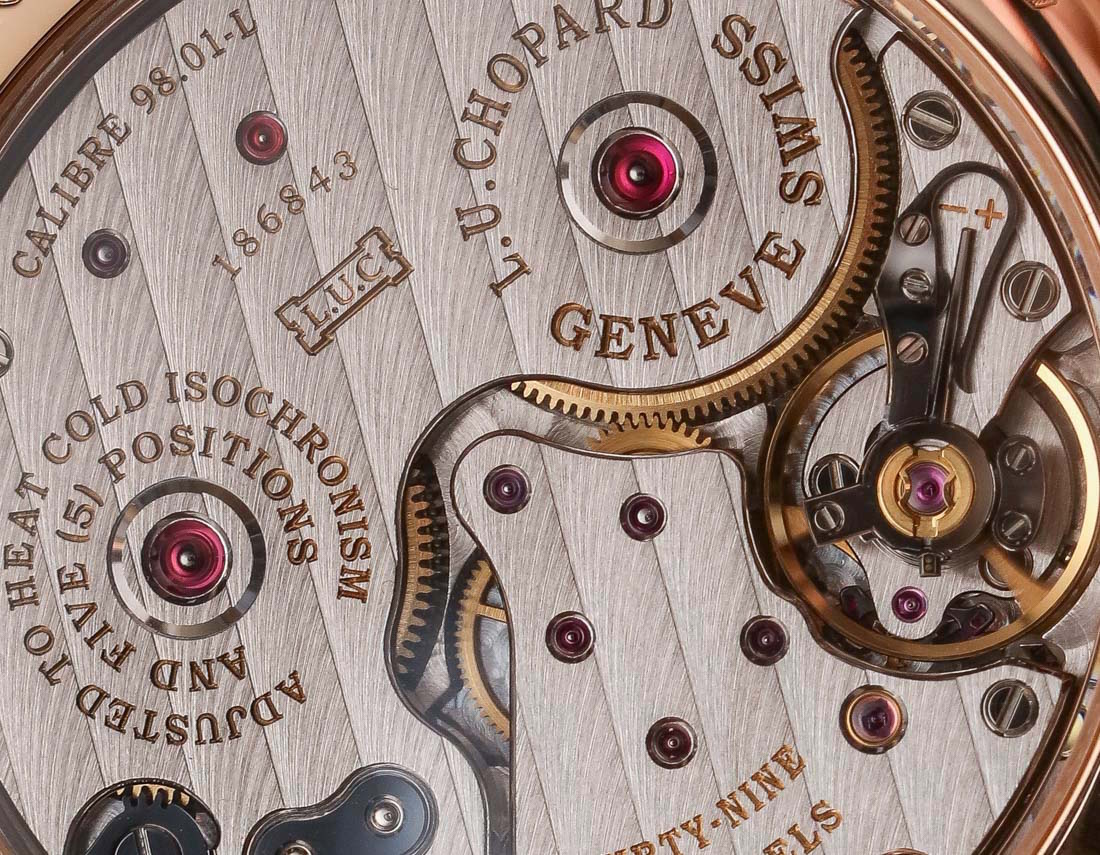 Overall I think the Chopard L.U.C Quattro Limited Edition is a fantastic statement piece for the brand. The only other current-production watch with both the Geneva Seal and COSC certification that I’m aware of is the Vacheron Constantin Historiques Chronomètre Royal 1907, with a price-tag north of $47,000. Patek Philippe also used to make dual Geneva Seal and COSC certified watches with 10-day power reserves, in the form of their limited edition reference 5100J “Manta-Ray” which can command prices in the ballpark of $30,000 pre-owned. With an asking price of 24,600 CHF (equivalent to $25,900 USD at time of writing), the Chopard L.U.C Quattro Limited Edition offers a significantly more affordable alternative to its direct competition, with the added exclusivity of being a limited run of 50 units. chopard.com