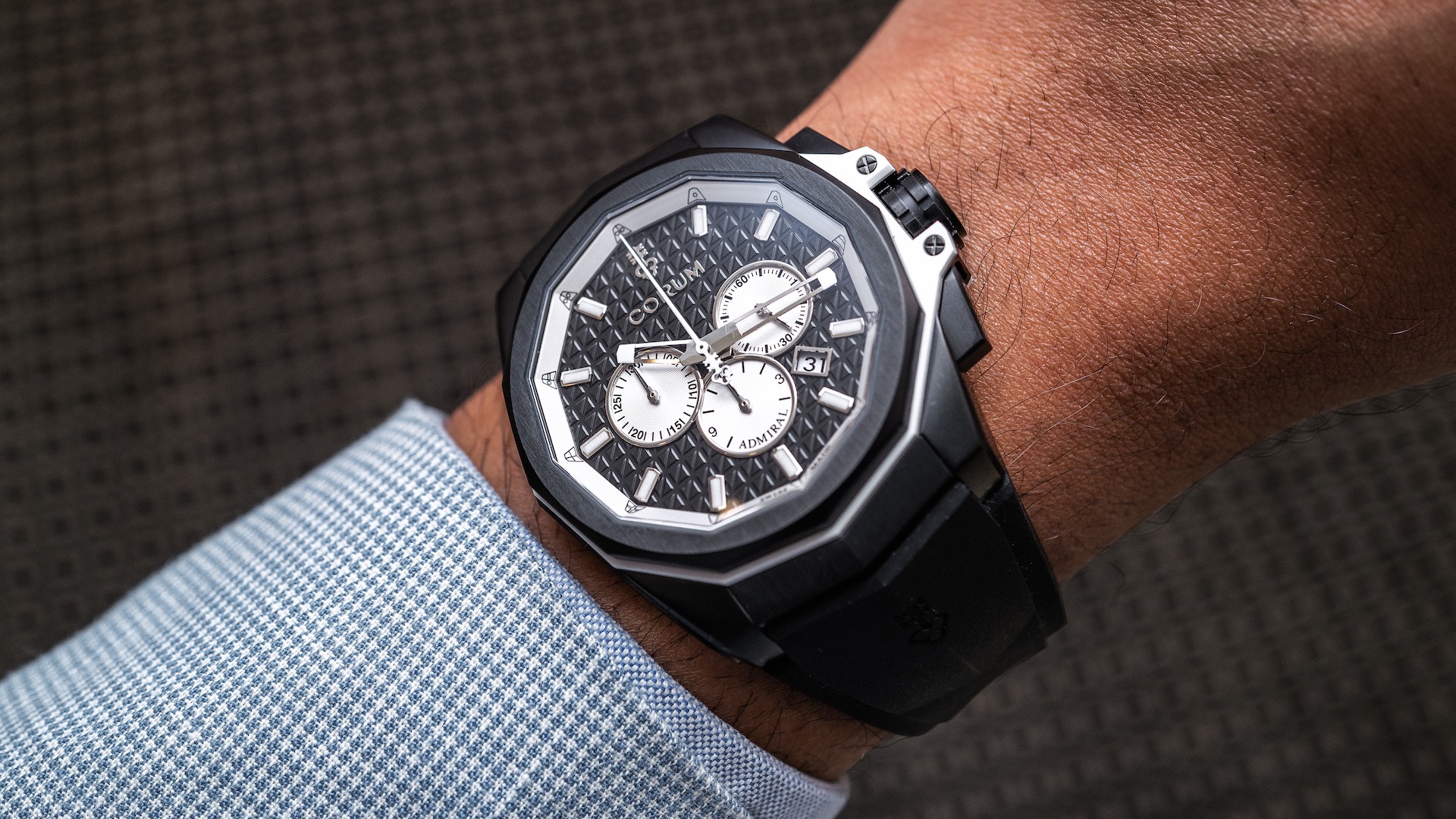 Corum debuted the Admiral’s Cup AC-One 45 Chronograph back in 2013 as a new line within its iconic Admiral’s Cup collection. Less “quirky” and more contemporary in design, the AC-One 45 has since seen some more elaborate models, all of which seem to shout out, “This isn’t your Grandfather’s Corum watch.” Now in 2019, the brand is releasing its latest iteration with a slightly different name. The new Corum Admiral AC-One 45 Chronograph collection is an impressively refreshed luxury sports watch line that doesn’t abandon its identity or DNA, while recognizing that people’s tastes have evolved, and moves along with the times. 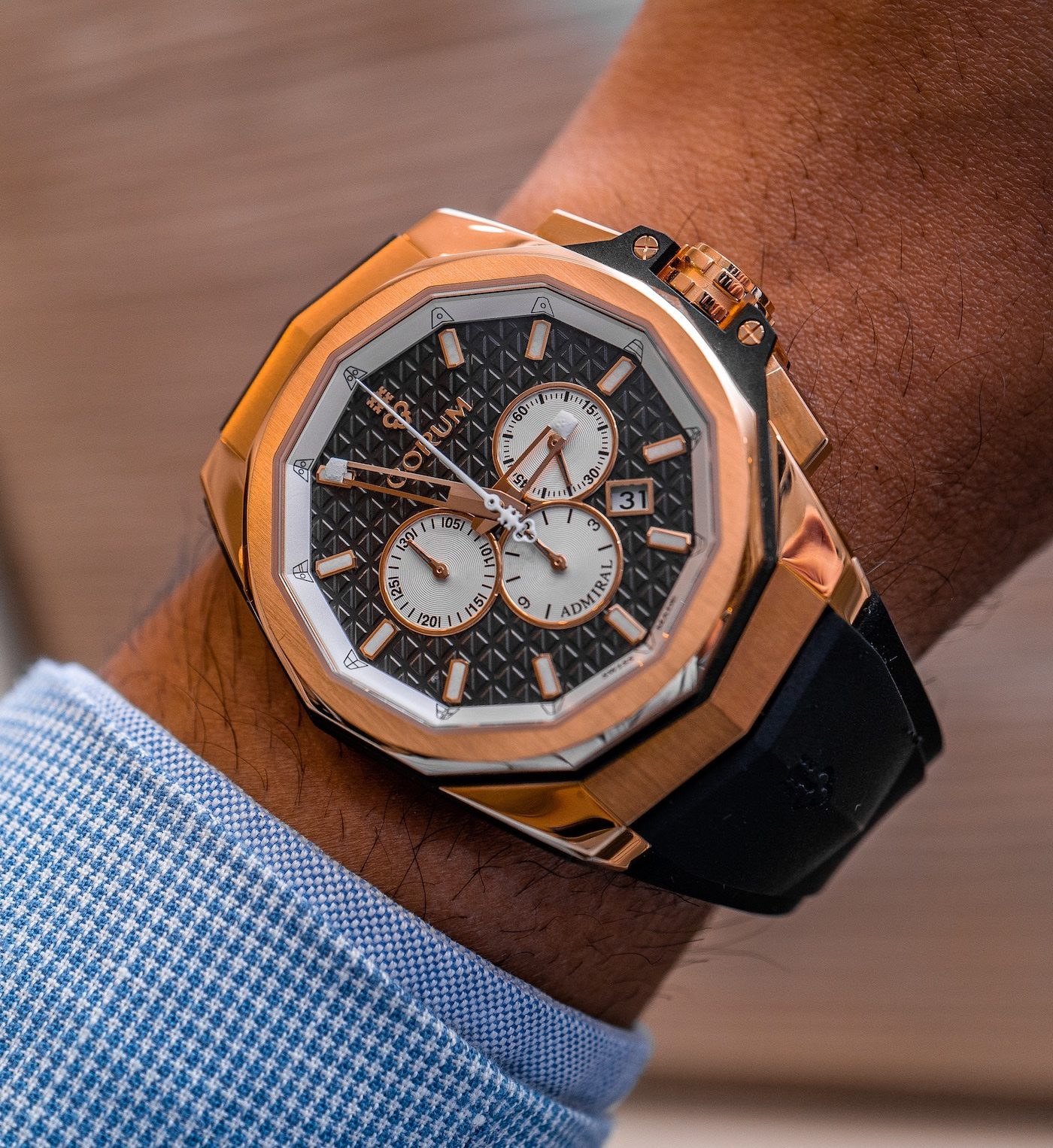 The Corum Admiral’s Cup watch has been around since 1960, when it was released as the first square-shaped water-resistant watch. The Admiral’s Cup remained a square watch until the early 1980s, when Corum made the first major change to the design of the Admiral’s Cup by creating the now easily recognizable dodecagonal case shape. The watch would go on to even outlive the eponymous Admiral’s Cup yachting regatta, which ended in 2003. The Corum Admiral’s Cup watches produced from about 1983 all the way to 2006 would share this case shape. In 2006, Corum modernized the watch with a bigger case and more of an overall “sports watch” style, with the first AC-One 45 Chronograph arriving seven years after that. 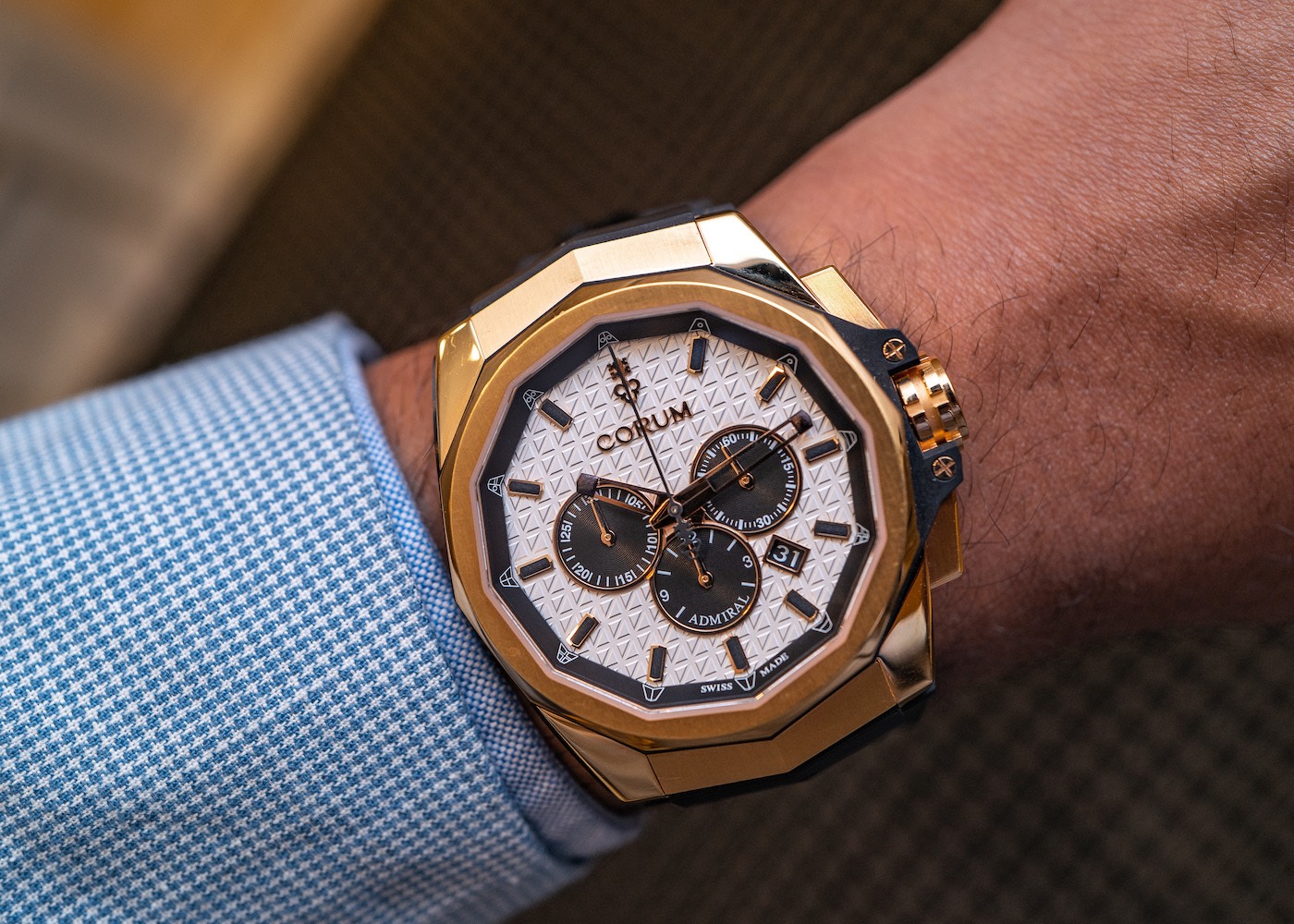 The dodecagonal twelve-sided “Admiral case” still defines the watch, which is now leaning even harder into the crowded, competitive, and diverse segment that can best be described as boldly designed luxury sports watches that prefer a strap to a bracelet and can boast high water resistance. It’s obvious to anyone that pieces like the Audemars Piguet Royal Oak Offshore and Hublot Big Bang absolutely dominate the segment. However, with the AC-One 45 Chronograph being about a third the cost of the chronograph versions of these two, the competitive landscape is friendlier territory for Corum. The brand is pricing these 300-meter water-resistant luxury chronographs right at the sweet spot: $9,900 in titanium and $18,000 in gold. 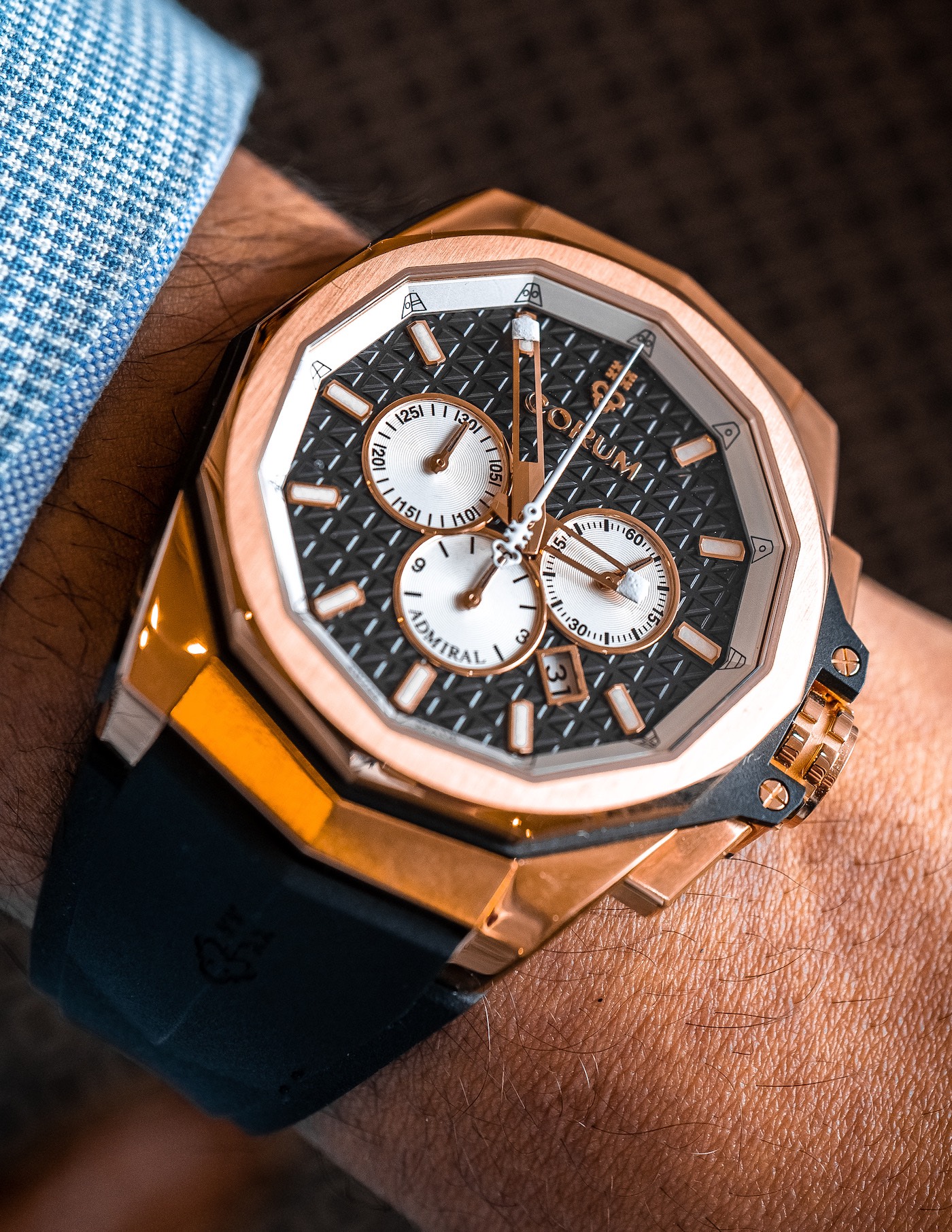 There are four models of the new Admiral AC-One 45 Chronograph, two in titanium and two in gold. The dial options are the same no matter which metal you choose, either a panda dial or a reverse panda dial.  The changes and updates made to the dial don’t comprehensively change the identity of the AC-One 45 Chronograph, but they are potent and give me more faith in the brand’s future than I’ve had since I became a watch enthusiast. 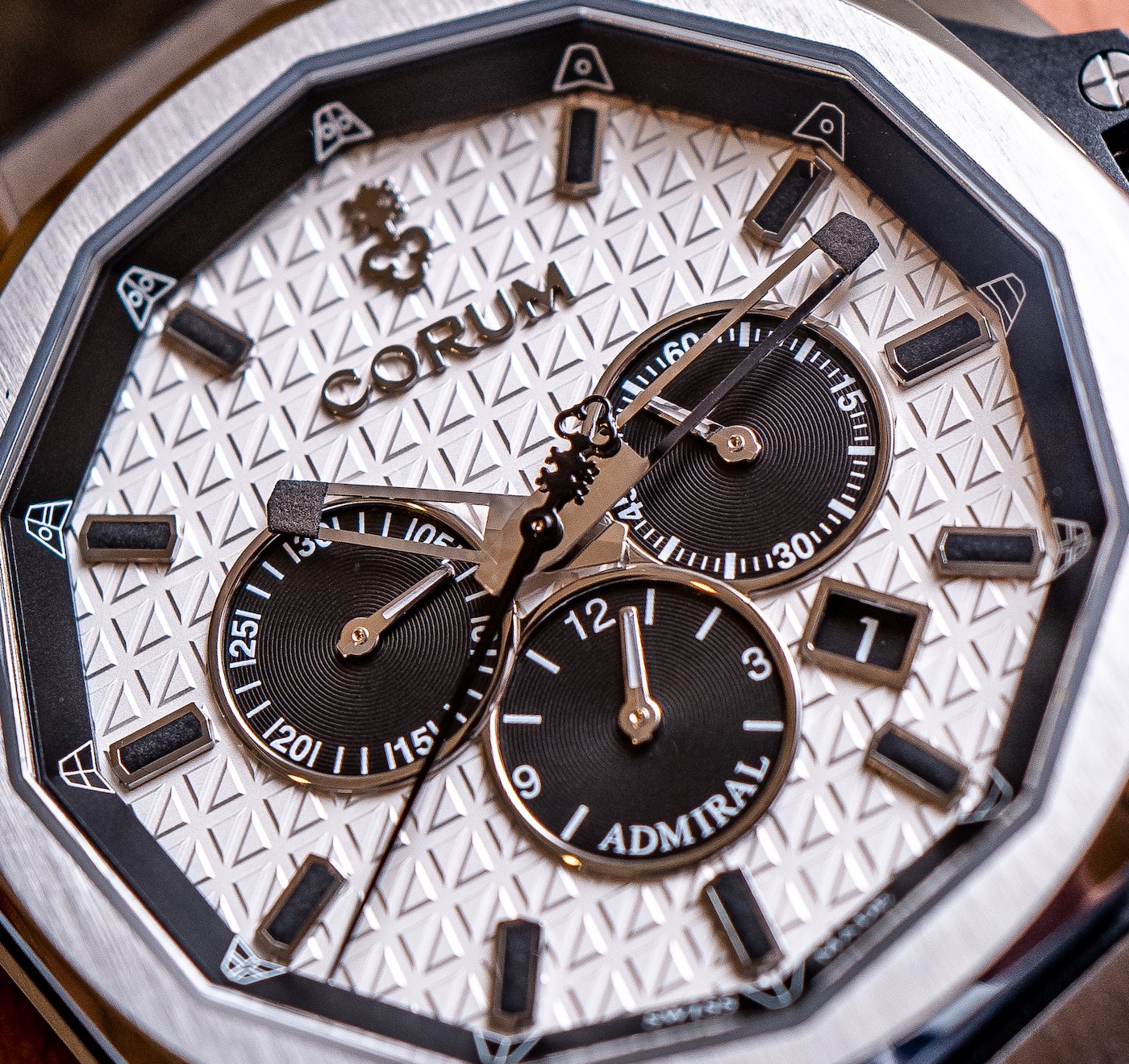 The outgoing version had a large ’60’ index at 12 o’clock, which is now gone. It’s replaced with an applied Corum key that is proportional in size to the rest of the hour-marker indices around the dial. I have always found the Corum key to be alluring and memorable, so I’m glad it’s now getting prominent placement on the dial without competing with needless distractions that dwarf it in comparison. Unchanged is the chronograph hand design which also uses the Corum key as the counterweight. It’s a matter of taste but I think it looks simply glorious.

The dials are all decorated in Corum’s “grenadier fendu” (“split pomegranate”) pattern. It’s a simple but attractive repeating pattern of raised diagonally cut squares that add a level of high-finish, as well as dimensionality, to the dial. 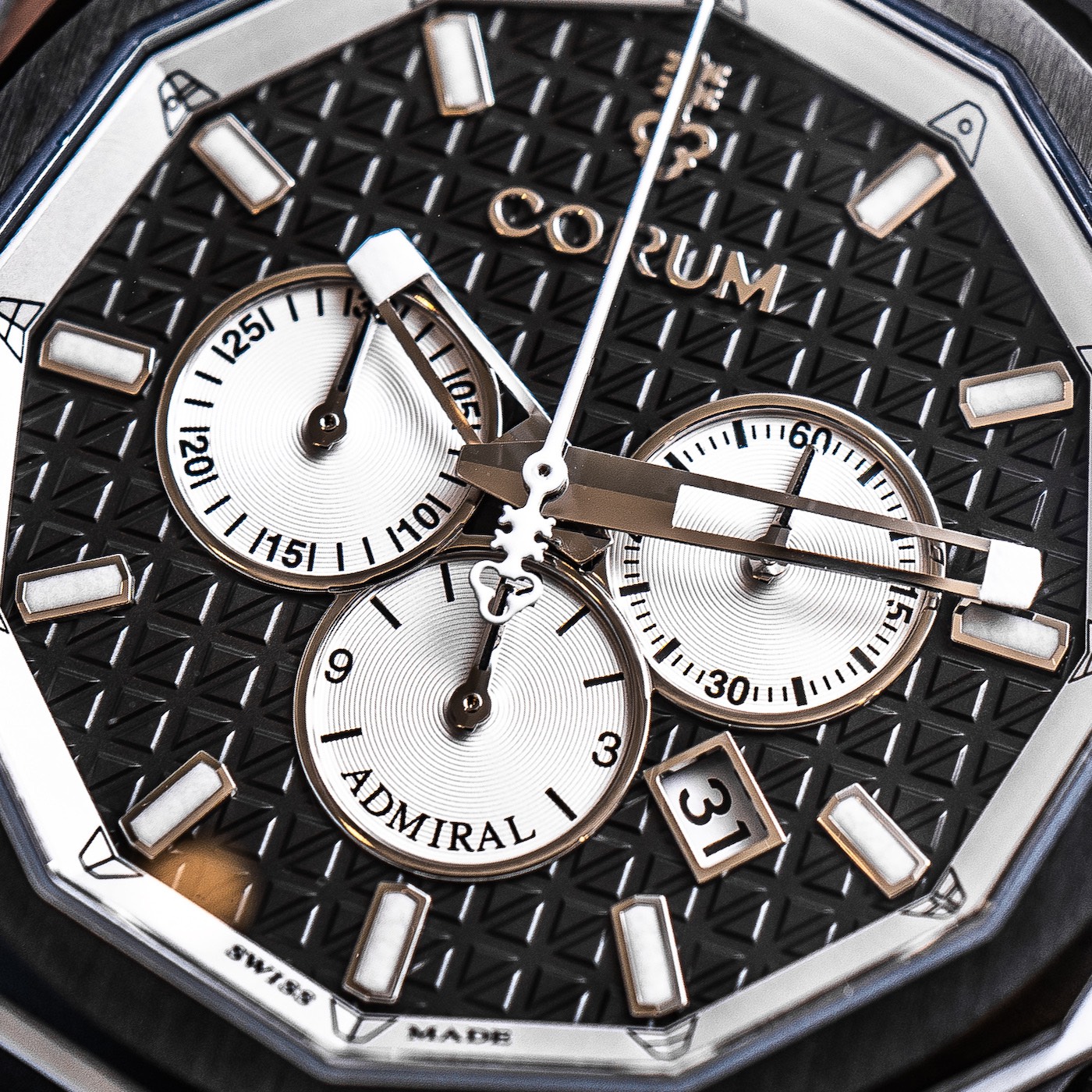 Now, it wouldn’t be a true successor to the Admiral’s Cup watches without the hourly nautical pennants that are as  closely associated with the watch as the case shape. Where the sloping flange (or inner bezel ring) creates a 150° angle is where you’ll find the corresponding number flag from the International Code of Signals. I can’t be exactly sure, but the numeral flags are, in part, characterized by corresponding colors. Here, the flags are thankfully done only in white or black. So, while the flag for 1 and the flag for 2 appear identical, the aesthetic decision was absolutely the right one since all the colors lining the dial would have absolutely ruined it.

While these nautical pennants don’t dominate the dial anymore, Corum honors the regatta-centric design DNA of the Admiral’s Cup in a tasteful way. 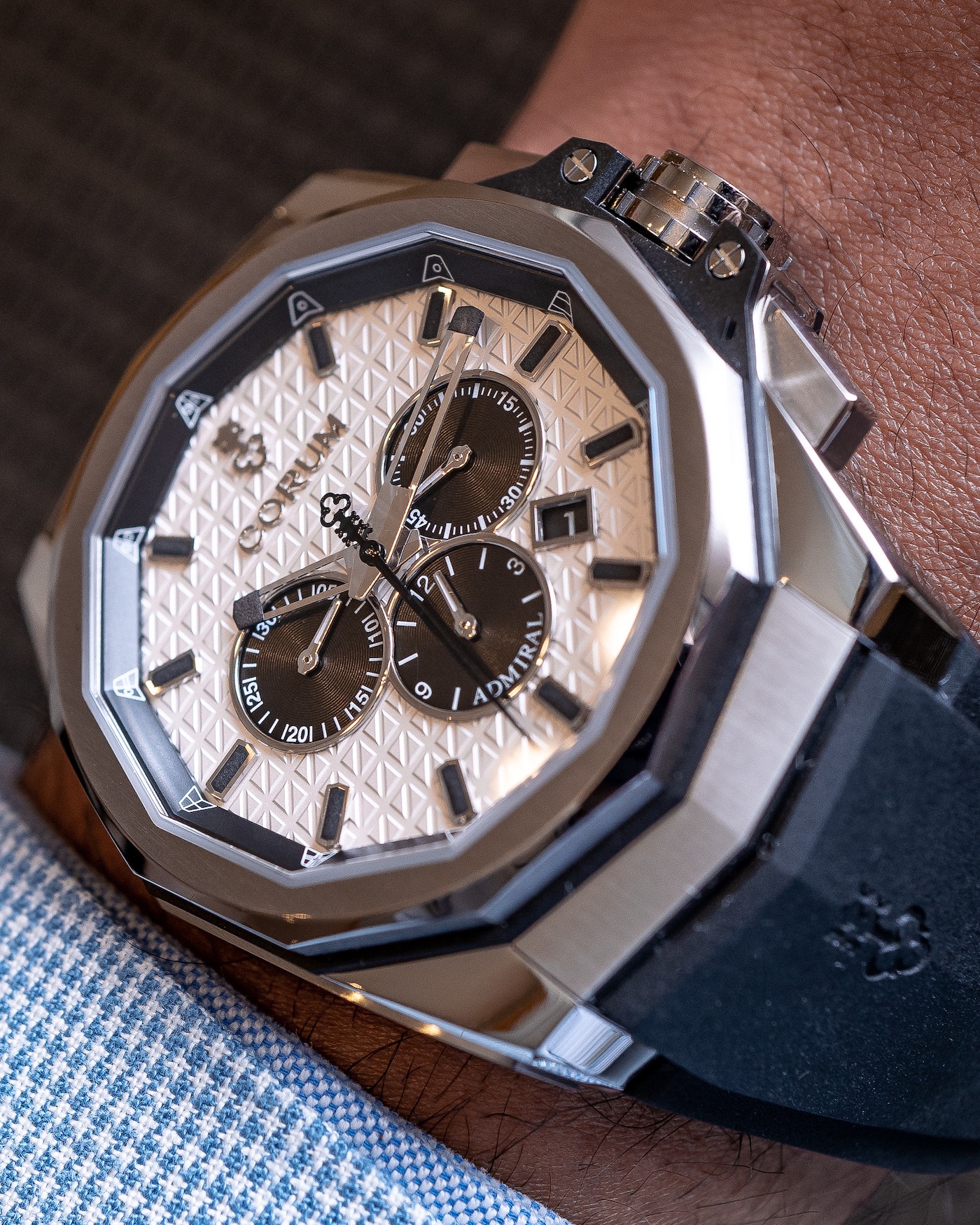 The chronograph sub-dials are bunched up close together, but the guilloché work and framing of each sub-dial adds refinement and more visual texture that complements the overall design, rather than clashing. The date window between 4 and 5 o’clock is similarly framed and, fortunately, matches the respective sub-dial color. The openworked and faceted hour and minute hands aren’t as legible as they could be, though I understand and agree with them as a pure aesthetic decision. Fortunately, the ends of the hands have lume, as do the hour markers.

One more thing about the dial: The old version had “Admiral’s Cup” written right across the dial. Now, the hours sub-dial at 6 o’clock simply reads “Admiral” across the the bottom. Fortunately, all of this is legible and easily read due to the healthy application of anti-reflective coating on the sapphire crystal on the dial as well as the exhibition caseback. 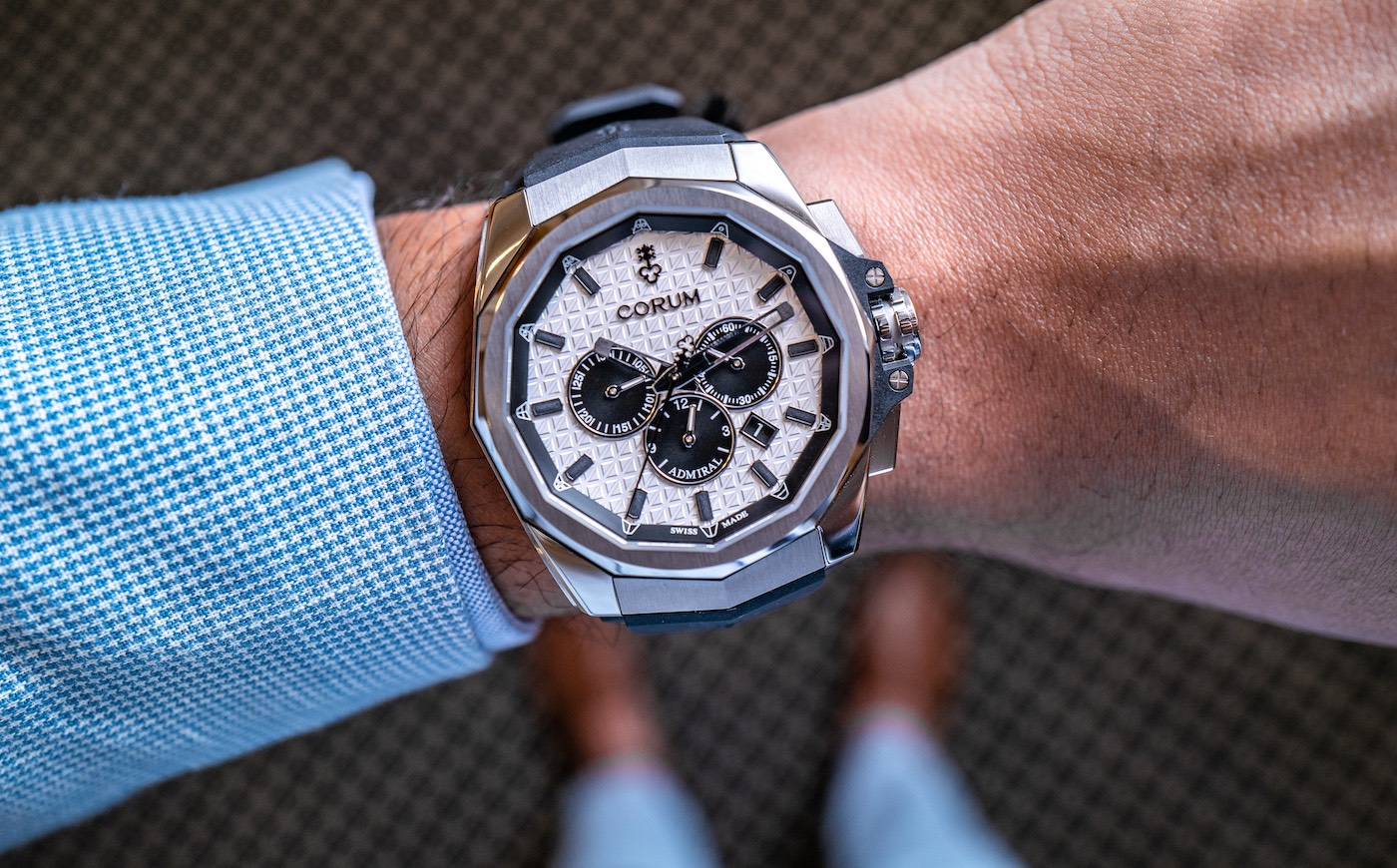 So, someone who finds a 45mm-wide case as typically being too big should keep the much more wearable lug-to-lug measurement in mind. The substantial size of the crown guard and chronograph pushers also explains the 45mm case width of the Admiral AC-One 45 Chronograph. 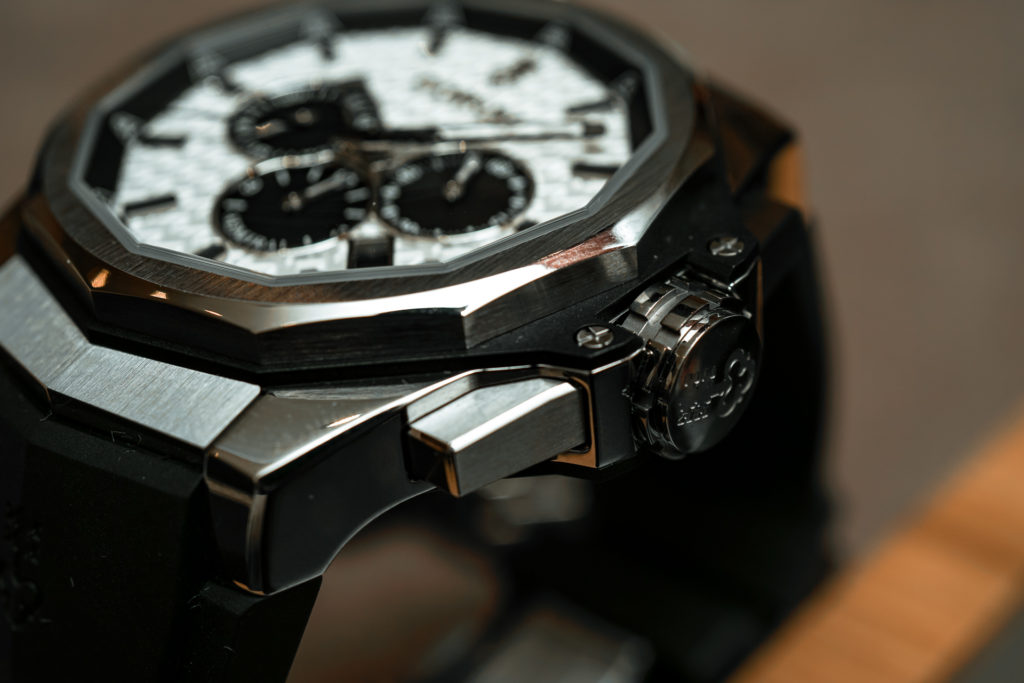 The cases are done in either titanium or 18k rose gold with a piece of titanium between the bezel and case. This extends around the double-knurled crown and is characterized by the two screws above and beneath the crown. This piece of titanium is done in black PVD for all but the reverse panda model in titanium which has a very cool white finish to it. Coincidentally, this model happens to be my favorite of the bunch, by far. Finally, the slightly angled chronograph pushers feel as good as they look, which is to say fantastic. 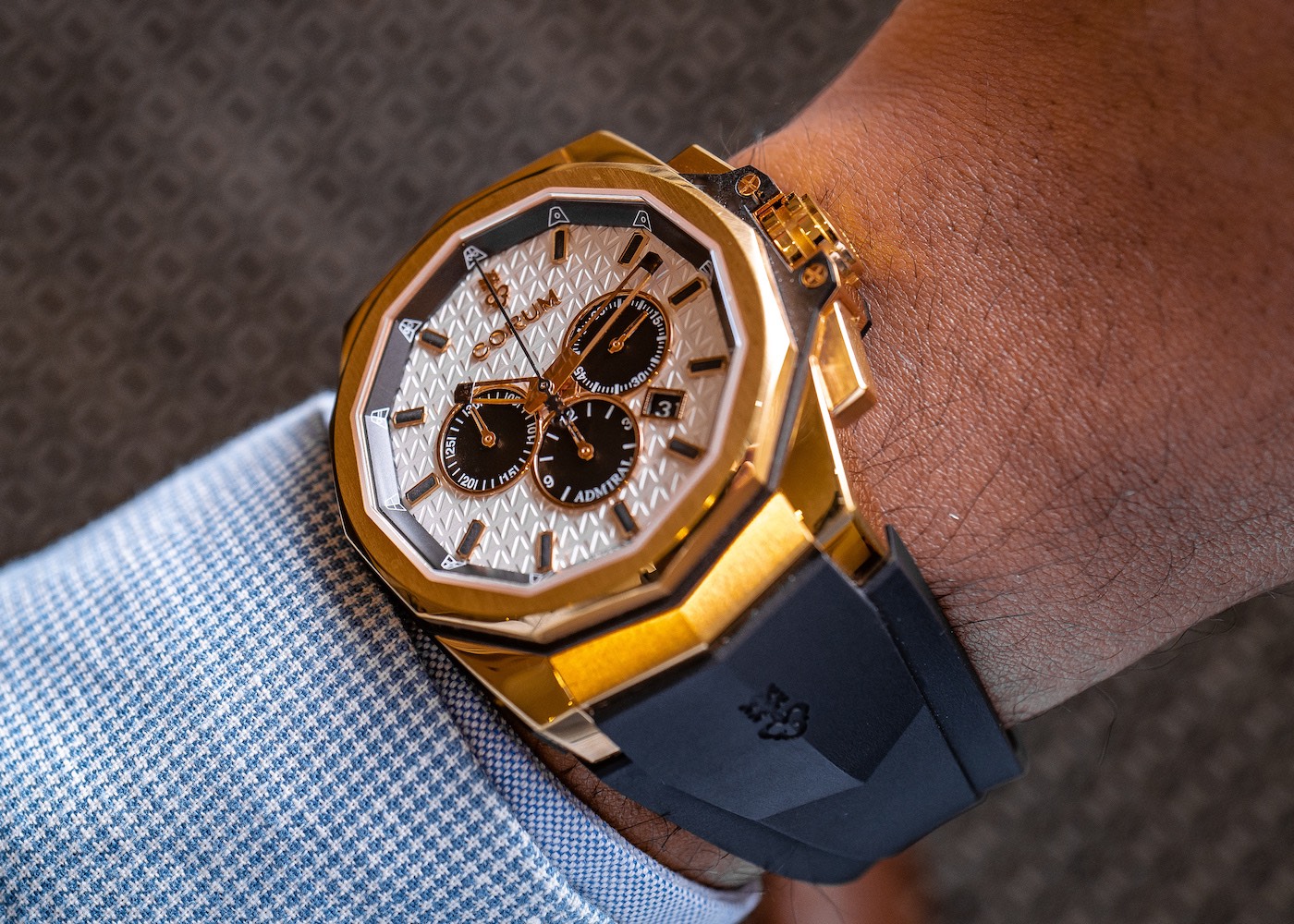 The titanium piece creates some separation between the bezel and the rest of the case. The part of the case between the lugs is angled, converging in the middle and creating a visual language that is carried on in the rubber strap. The integrated strap has been clearly thought out as a crucial part of the watch and the subtly engraved Corum key on both the top and the bottom is a great touch. Finally, Corum switched out the old buckle for a new triple-folding clasp. 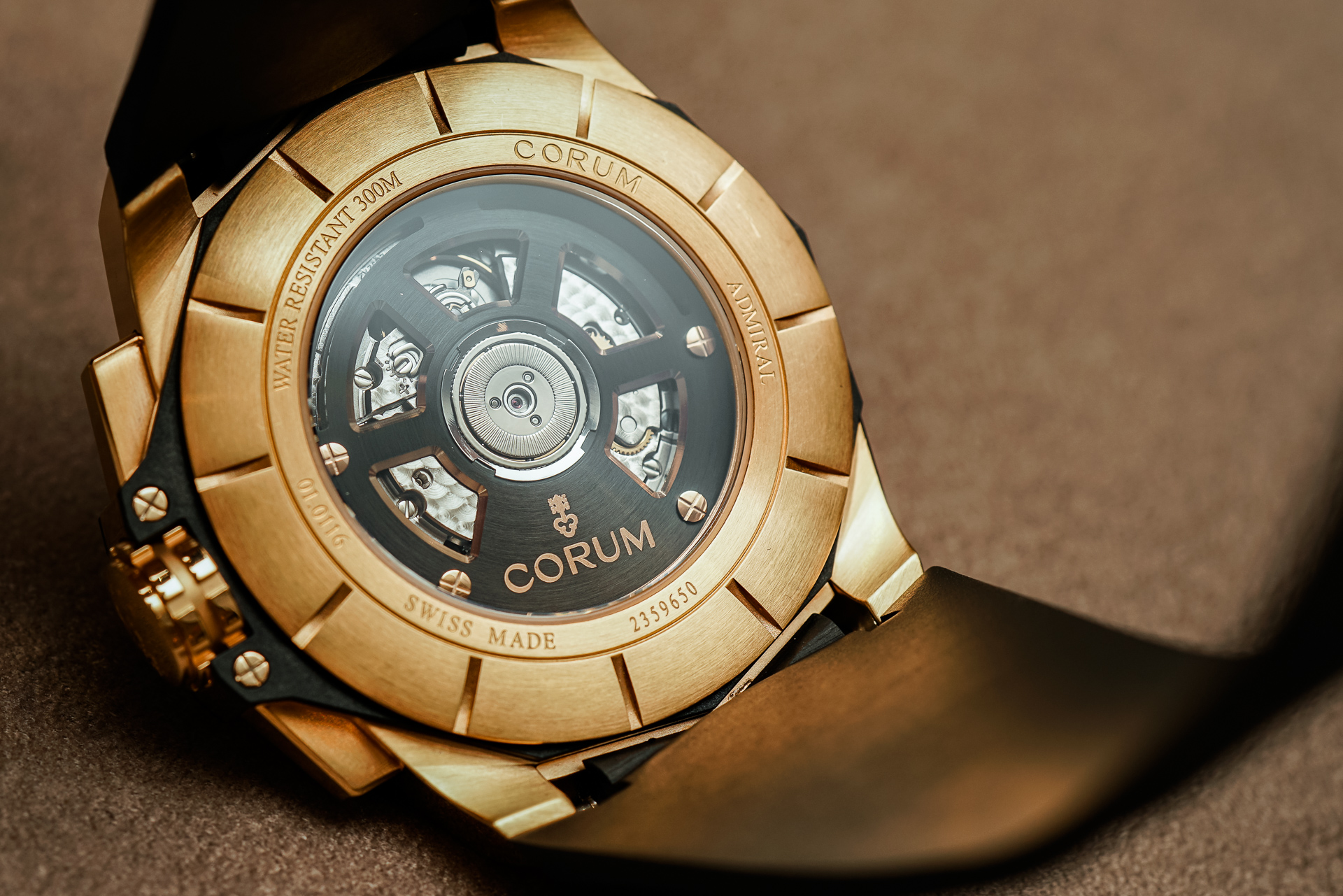 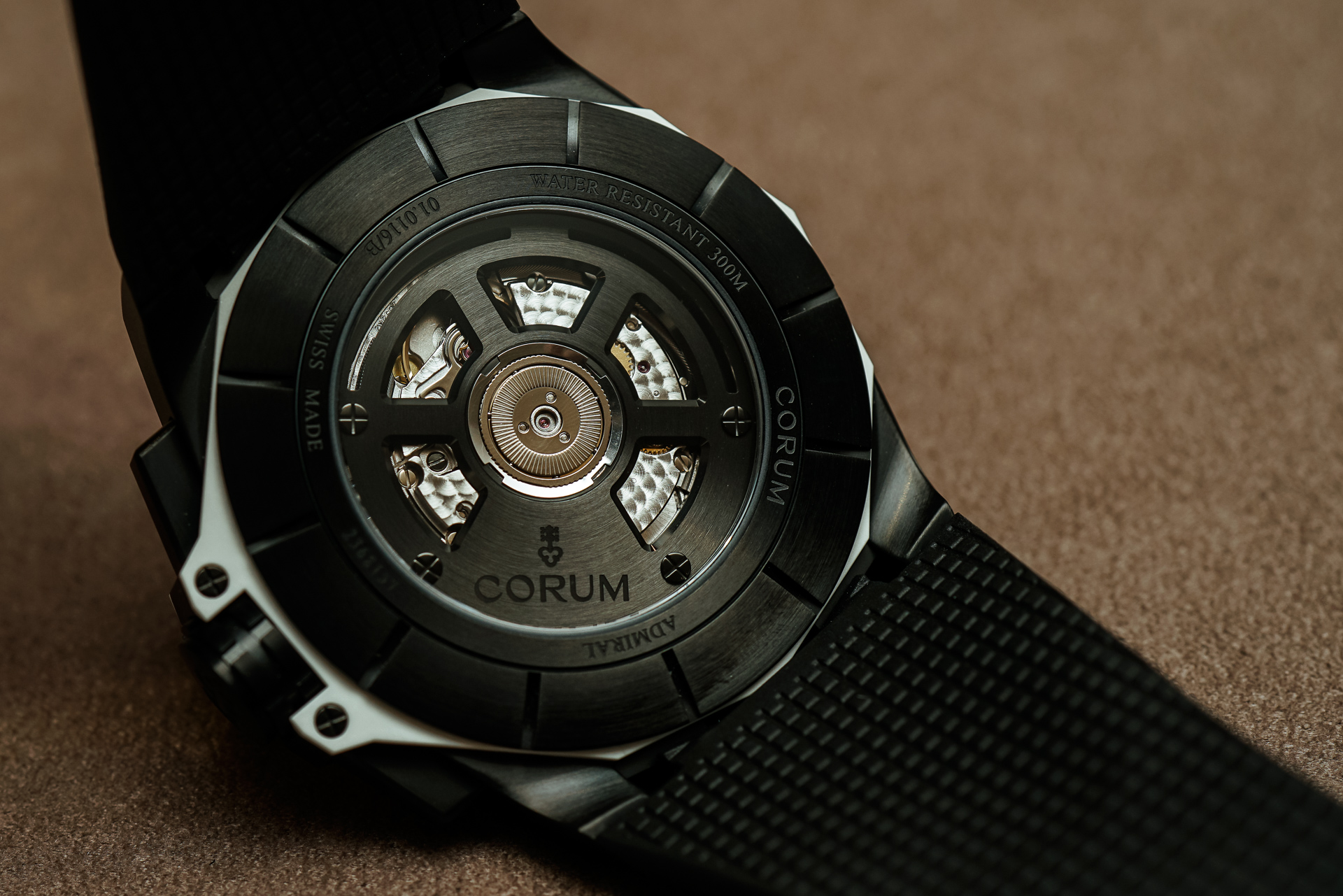 Turning the Corum Admiral AC-One 45 Chronograph around reveals an exhibition caseback and the automatic Corum CO 132 movement, which, I believe, is a modified ETA movement. The black PVD-coated rotor takes up much of the caseback, though the Corum logo in the gold versions looks very nicely done, as do the decorative screws. The CO 132 operates at 28,800 vph and has a 42-hour power reserve. 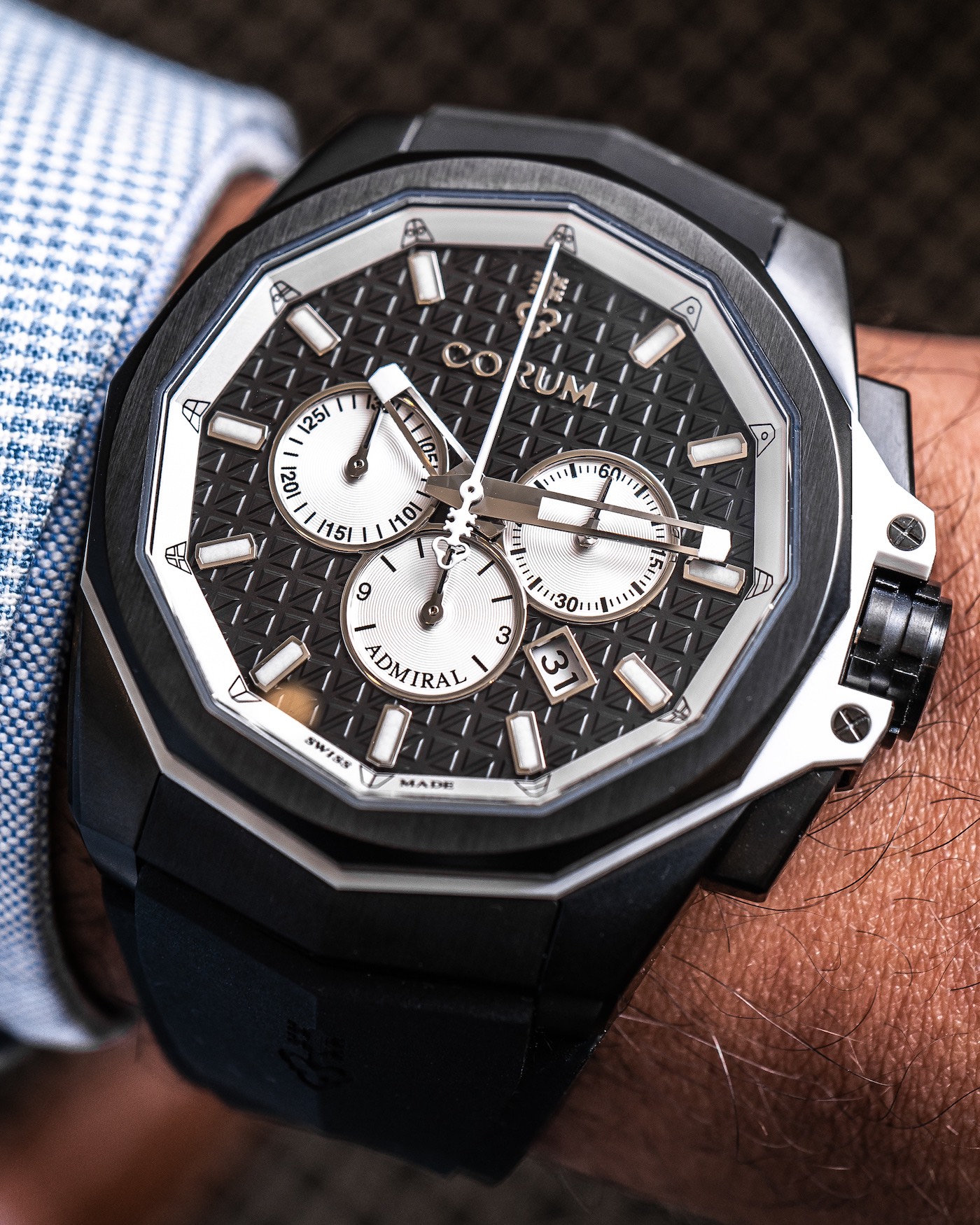 The newly updated Corum Admiral AC-One 45 Chronograph is a testament to how thoughtful design and a willingness to iterate can result in an exponentially better product. This watch is one of the most pleasant and unexpected surprises for me this year. It looks, feels, and wears great; however, there’s certainly room to improve with the movement. These watches should make their way over to the Corum e-shop soon this year.