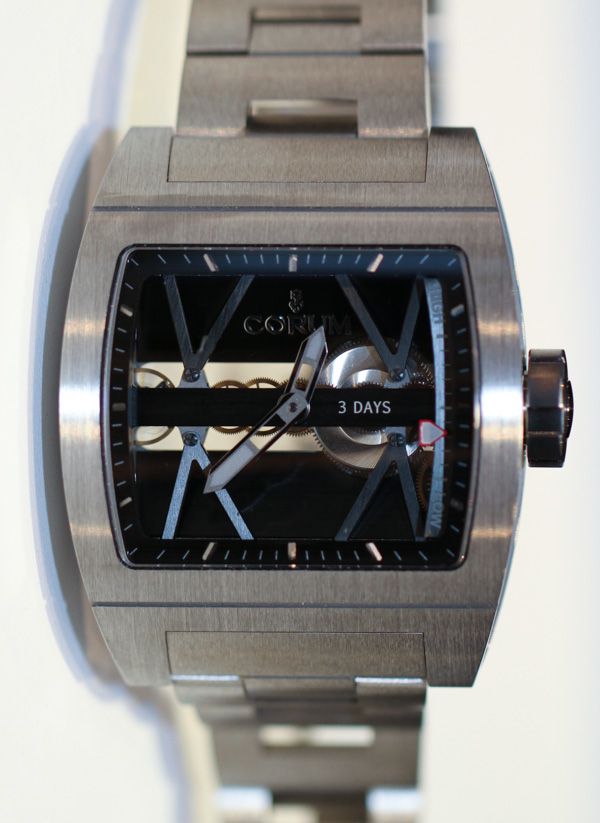 For some reason, all of 2012 went by without us posting a single article on Corum on aBlogtoWatch. I personally covered the brand on other sites such as Departures-International.com, during that year, but it was all quiet on this front. So here is a piece I should have covered last year but at least I am getting to it now. This is probably the most interesting and useful of Corum’s masculine Ti-Bridge collection of watches. It is the Ti-Bridge 3 Day Power Reserve (which I will just refer to as the “Ti-Bridge Power Reserve”) and there is a lot to like about it if you are into the style and Corum Bridge concept.

One of Corum’s major product “pillars” is the Bridge, aka “Golden Bridge” collection of timepieces. These have very elegant linear movements that are vertically aligned and suspended in tonneau-shaped cases. While really interesting in its design, the Golden Bridge never felt manly enough, even with its men’s versions. Though Corum says that is totally not true in Asia. Fair enough. For the rest of the world they needed a more dude-friendly version of the Bridge watch that could encapsulate the same movement notion. Thus, the Ti-Bridge watch was born. 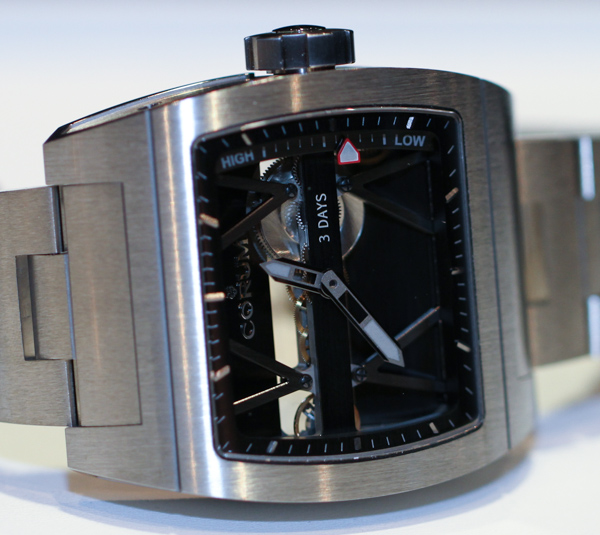 The “Ti” in the name stands for titanium, which is the material of the watch itself as well as the movement bridge. For this collection of watches (originally released a few years ago), Corum placed the linear movement on its side and added some neat X-shaped bridges to hold the movement in place. In this orientation Corum was able to make a different style of case which is sort of a grown-up tonneau case and is 42.5mm wide by 52.5mm tall. The curvy case fits nicely on the wrist and is bold and pretty interesting. No doubt it is for watch movement lovers, as you can almost pornographically see the gears and movement in action. I love that so little is hidden…

The Ti-Bridge Power Reserve incorporates the Corum CO107 manually wound movement that has a full three days of power reserve. My favorite part is the linear style power reserve indicator on the right of the dial. A red-framed arrow indicator moves up and down across the indicator gauge as a useful, but out-of-the-way power reserve. I will say it once again, if I must wear a manually wound watch, it better darn well have a power reserve indicator. As having an automatic rotor would sort of defeat the purpose of this movement, Corum was really smart in adding this complication to make the Ti-Bridge collection more desirable. 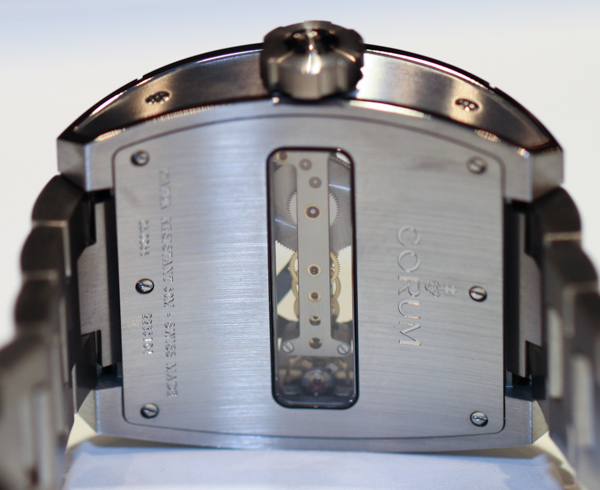 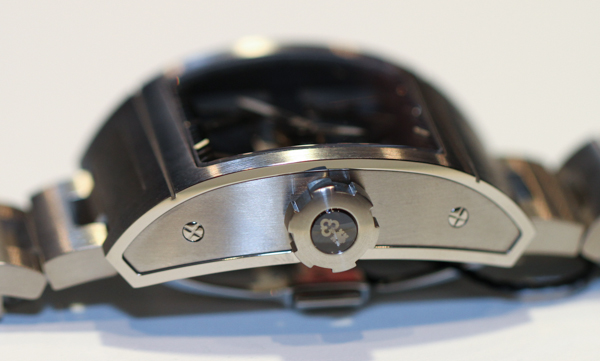 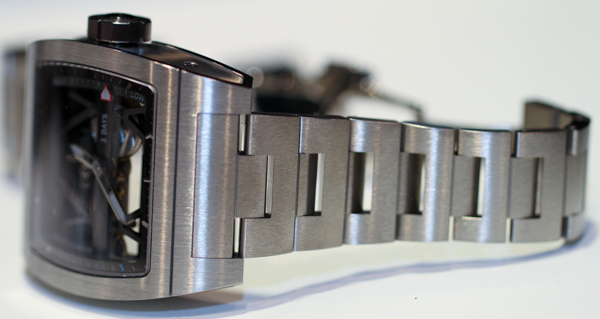 The movement is well designed and great to look at, even though the tones are dark, appreciation of the detail is not difficult. Another important addition to the dial are the actual minute and hour indicators around the periphery on a flange ring. It might not seem like much, but it does allow for some measure of legibility. The hands are on the stubby side for sure, but reading the time shouldn’t be an issue.

Another really good part of the movement is the depth. Corum also did a nice job of having a rear semi-plate on the back of the watch so that you don’t have to look at your arm hair all the time. There is just one open strip under the movement. The Golden Bridge watches all have much more open sapphire windows on the front, rear, and sometimes sides of the case. Good for ladies more than men (at least ladies without that much arm hair). Corum has your wrists “covered” with the Ti-Bridge collection. 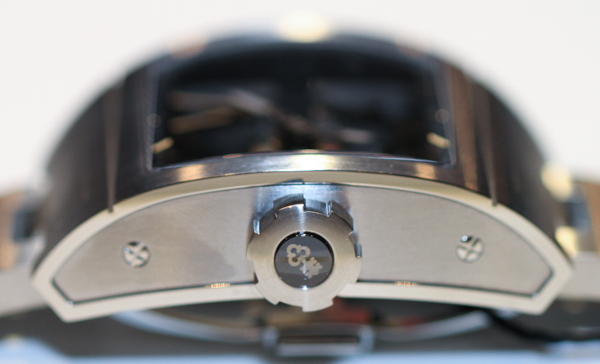 The Ti-Bridge Power Reserve case itself is in all titanium with a rather good fit and finish and interesting design. It has an industrial looking appeal given the long unbroken lines and brushed surfaces. I quite like that Corum deigned to produce a bracelet for this watch as well. This really enhances the overall presentation of the watch a lot in my opinion. Though if you prefer it on a rubber strap, the Ti-Bridge Power Reserve can come with one of those as well. Overall I think that the Ti-Bridge Power Reserve is a pretty interesting underdog watch and sits uniquely in the brand next to Corum’s more popular Admiral’s Cup collection. Retail price is $19,800. corum.ch