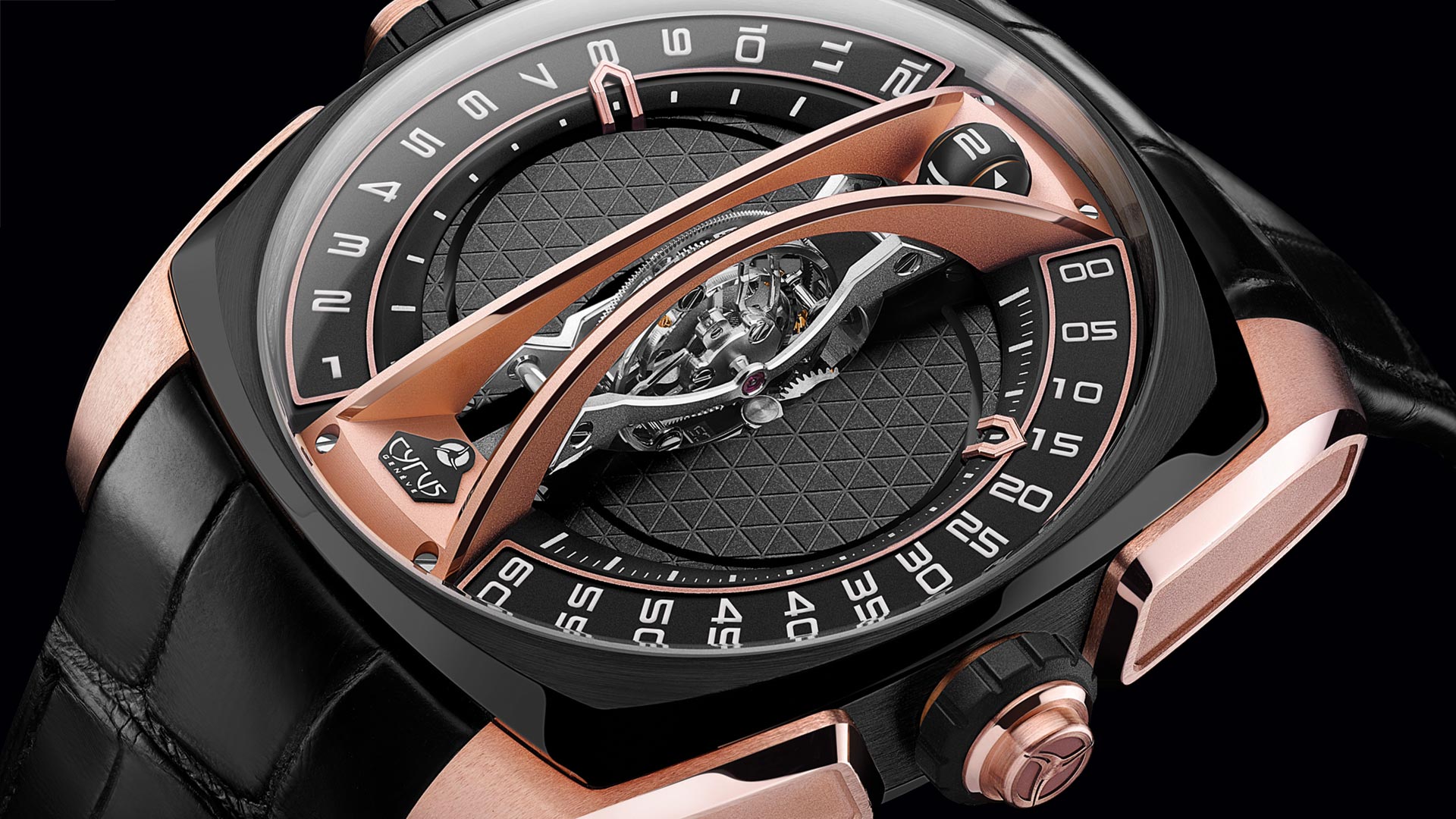 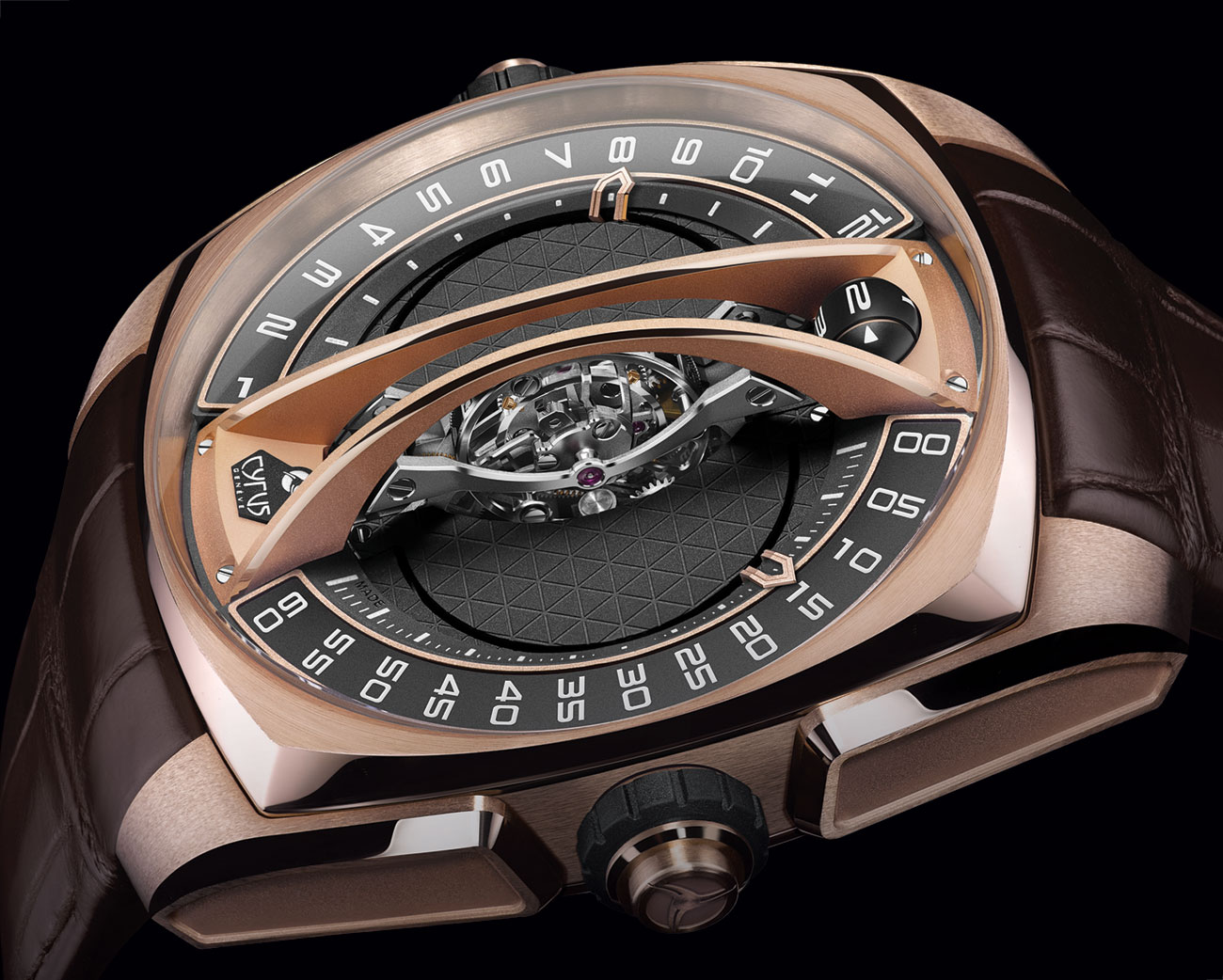 When mechanical watches first enjoyed a resurgence in the ’80s, tourbillon watches were highly sought-after by collectors. But they were rare and difficult to make. Nowadays, there is no shortage of tourbillon watches for seasoned, well-heeled enthusiasts to choose from. With that said, how does one make a tourbillon watch that is different from the rest and stands out? As it turns out, Cyrus has an interesting solution: turn the tourbillon on its side and make it vertical, as it was always meant to be, with the Cyrus Klepcys Vertical Tourbillon watch. 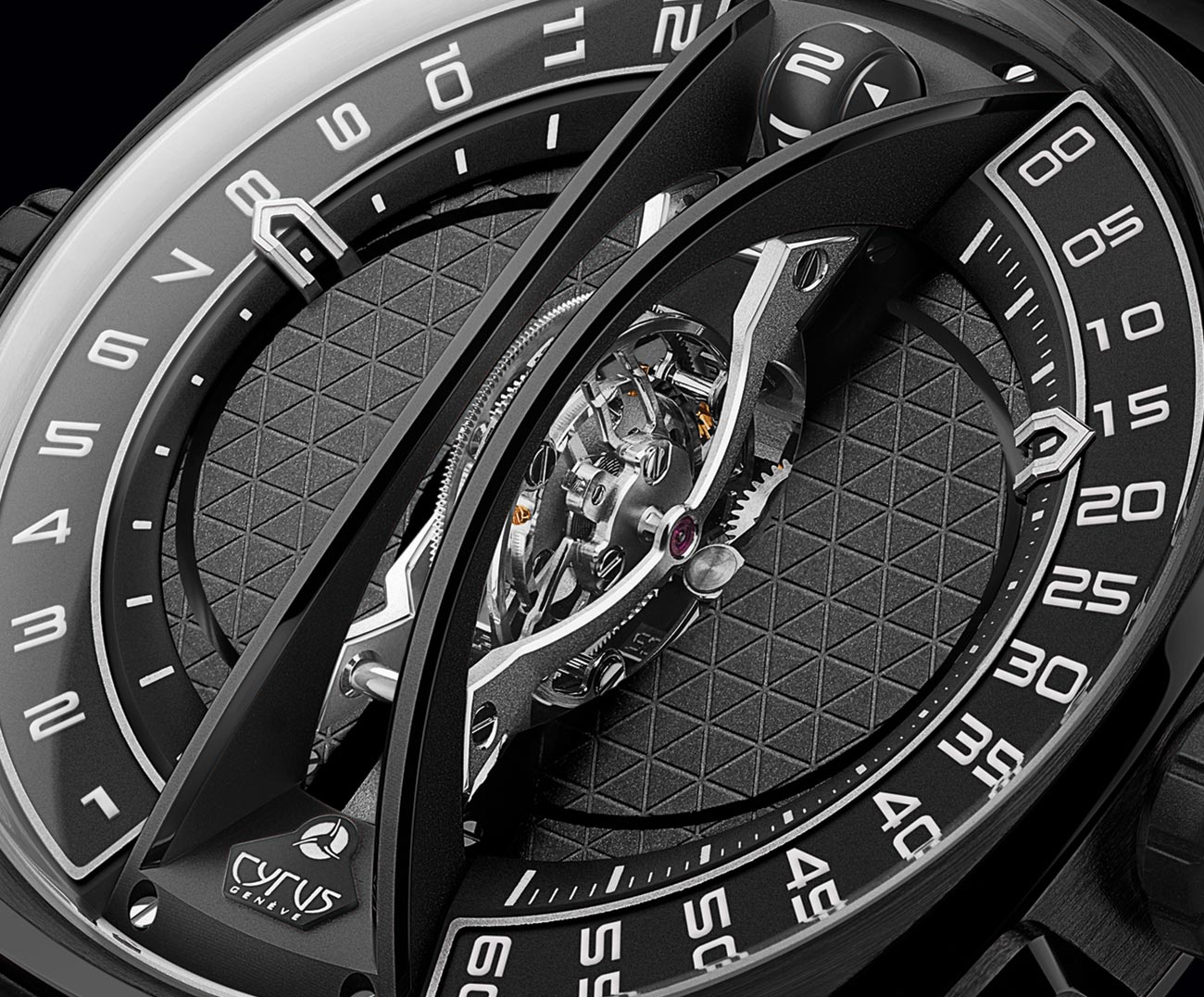 Unless you are pretty tuned into Swiss watch industry developments, the name Cyrus might be unfamiliar to you. Founded in 2010, Cyrus is a relatively new brand and is part of the larger Cyrus Watch Group, which also includes movement specialist Chronode. Chronode is behind some of the world’s most recognizable haute horology pieces including the MB&F Legacy Machine 1 and 2, Harry Winston Opus X, and HYT H1, just to name a few. The man heading Chronode is none other than noted watchmaker Jean-François Mojon. Hopefully, this little tidbit of information gives you a clearer idea of the capabilities of Cyrus Watches. 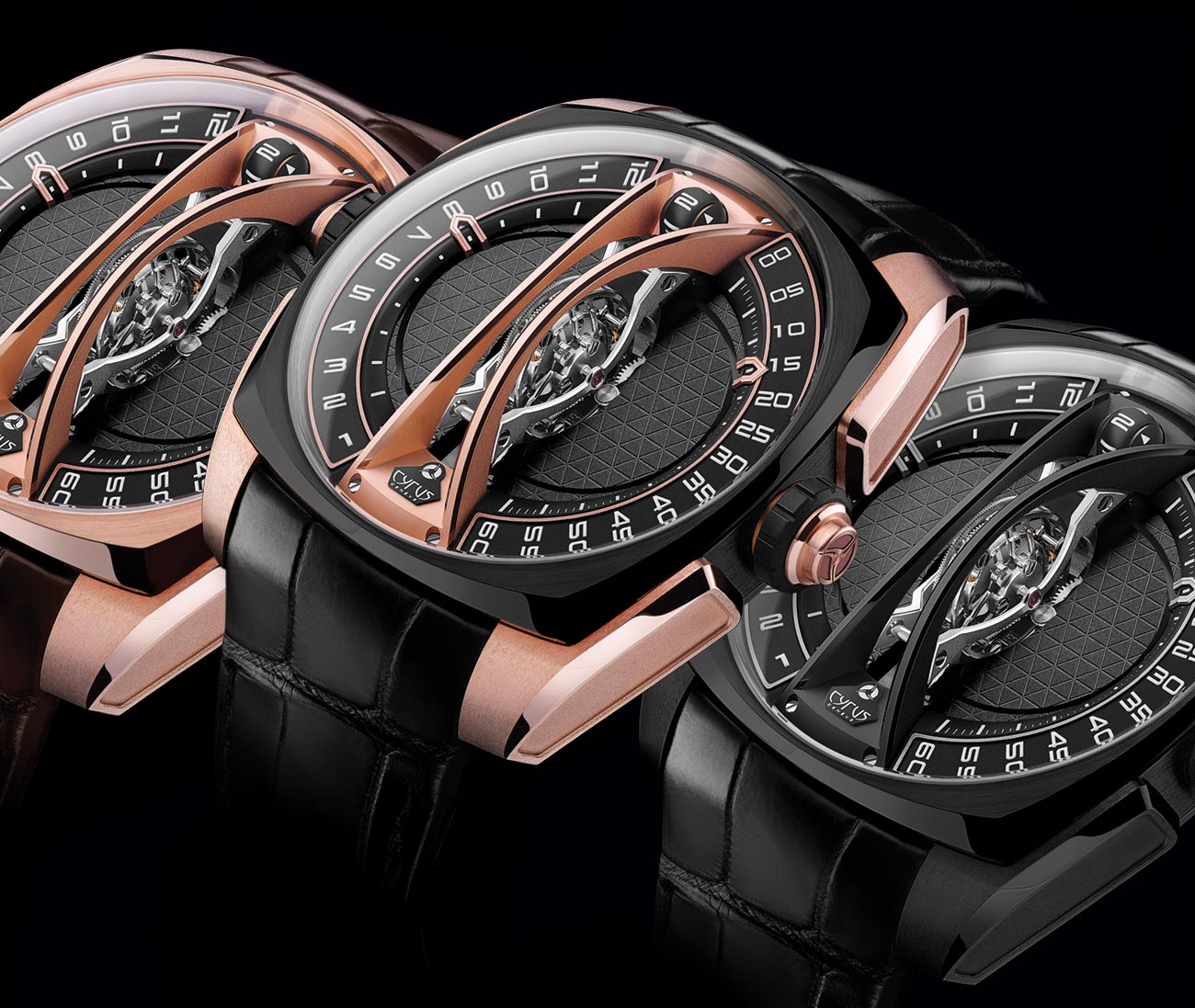 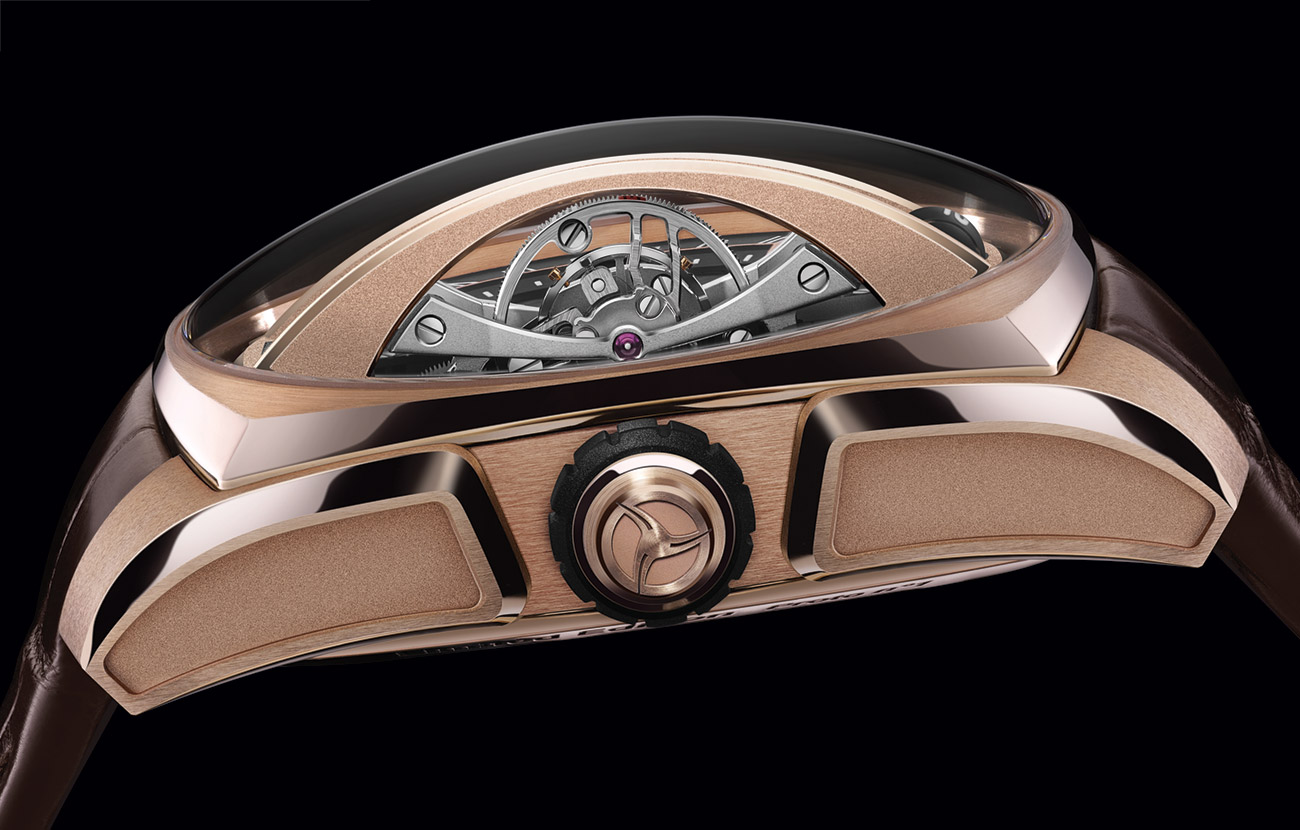 The Klepcys Vertical Tourbillon is a large watch, measuring 44mm wide and 18.65mm thick (water-resistant to 30m), with a complex case comprising no fewer than 26 parts. Cyrus offers the watch in three case variants: grade 5 titanium with black DLC, 4N 18k rose gold, and a two-tone case with grade 5 titanium and 4N 18k rose gold. There are some differences on the dial depending on the case material you choose. The rose gold and two-tone models have black dials with rose gold accents while the titanium model has a more plain dial with DLC finishing that makes it look more understated. 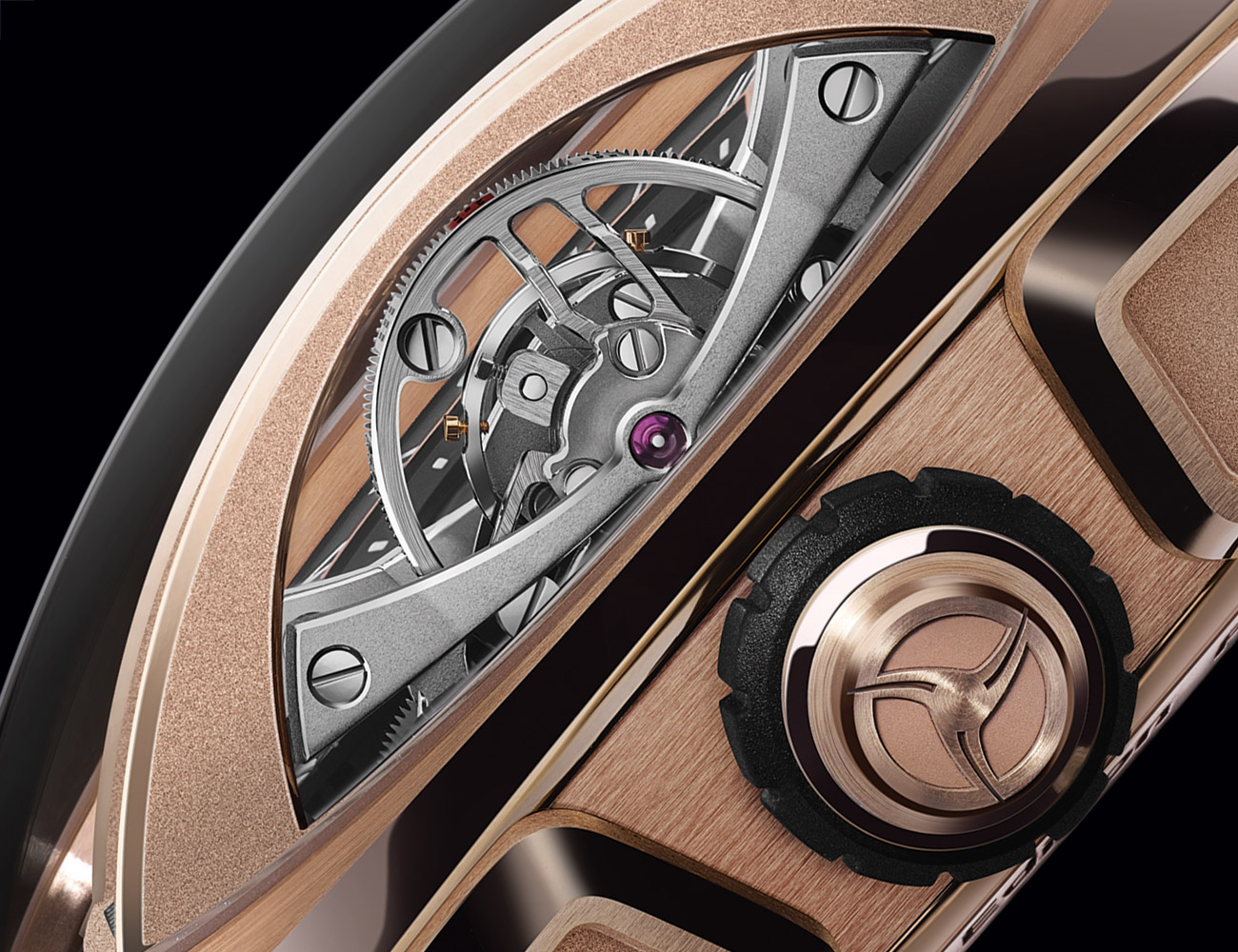 The Cyrus Klepcys Vertical Tourbillon has an interesting way of telling time. The dial is dominated by the central vertical tourbillon bridge that sweeps across the dial, dividing it into two. On the left half of the dial is a retrograde hour scale with Arabic numerals, and on the right half of the dial is a retrograde minute scale. In the center, like a table saw, is the vertically-mounted tourbillon with the seconds displayed on the tourbillon cage. There are two crowns: one at 3 o’clock and another at 9 o’clock. The former winds the movement and adjusts the time while the latter quickly advances the hour hand by hourly increments, which is nifty for flyers traveling across time zones. 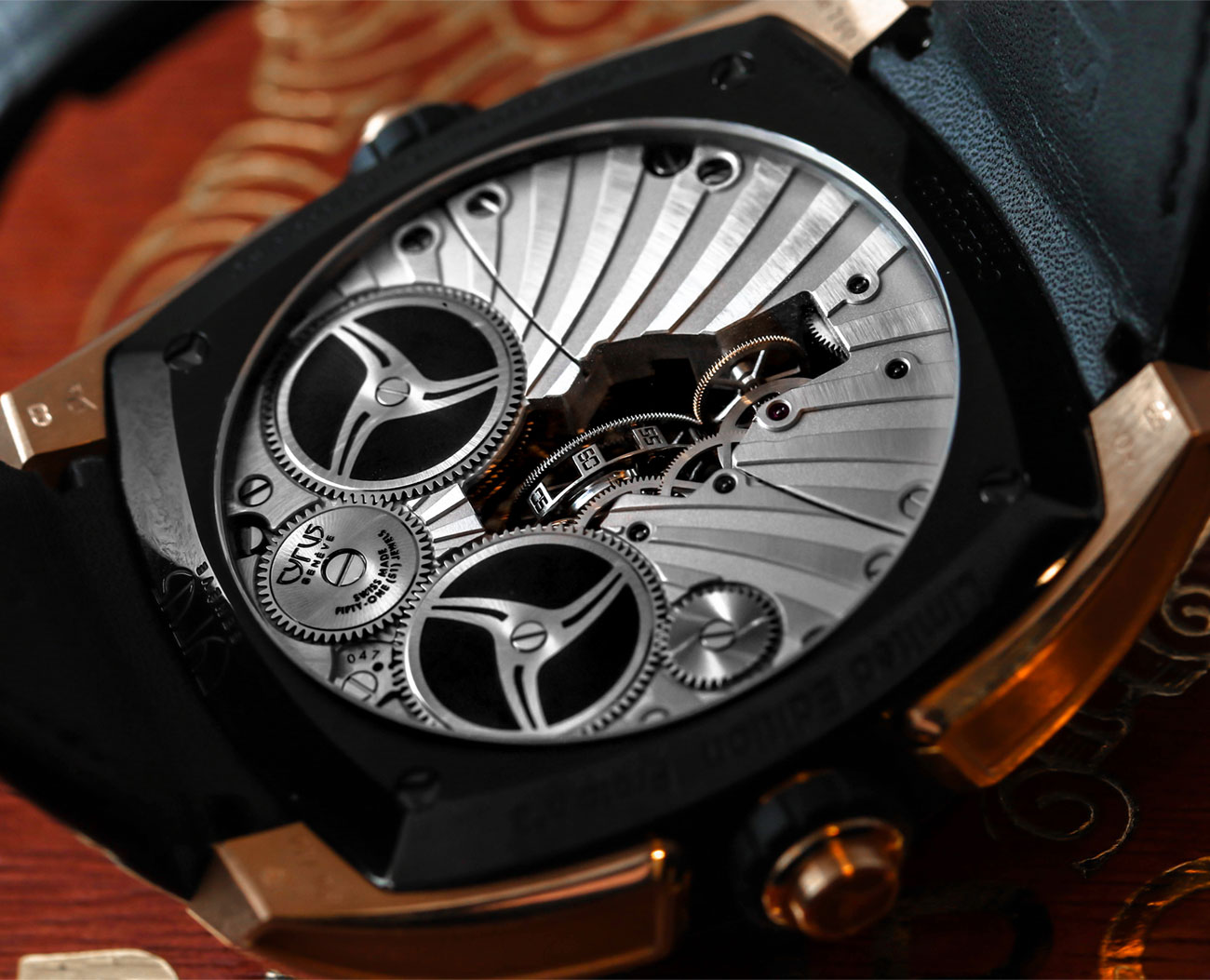 The movement within was designed by Jean-François Mojon and is made up of 344 parts. It is a manually-wound movement and it has a power reserve of more than 100 hours when fully wound, beating at 3Hz. Finally, the movement is visible through a sapphire display case back. The bridges are engraved with a distinctive sunray pattern that alternates between polished and sandblasted finishes. 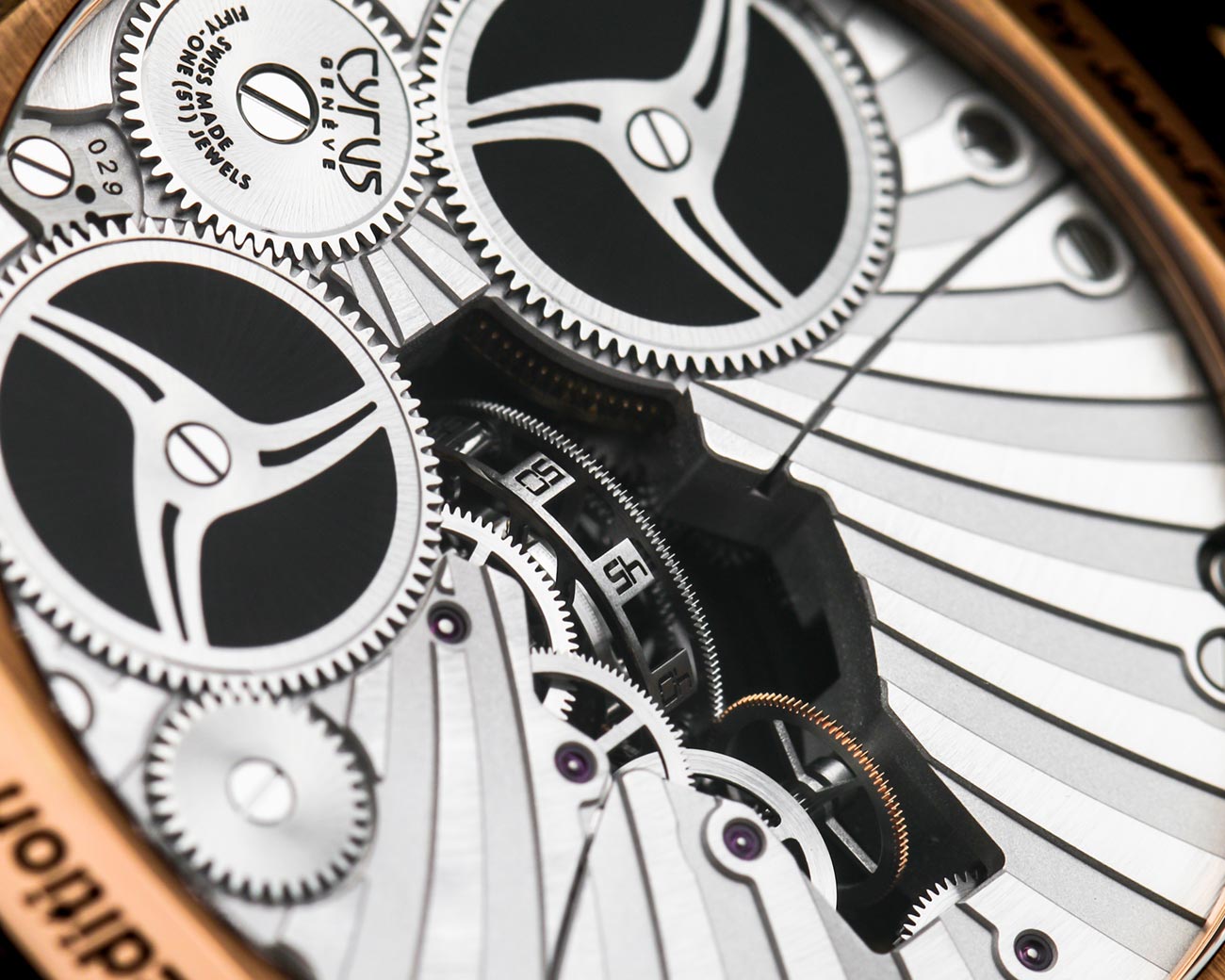 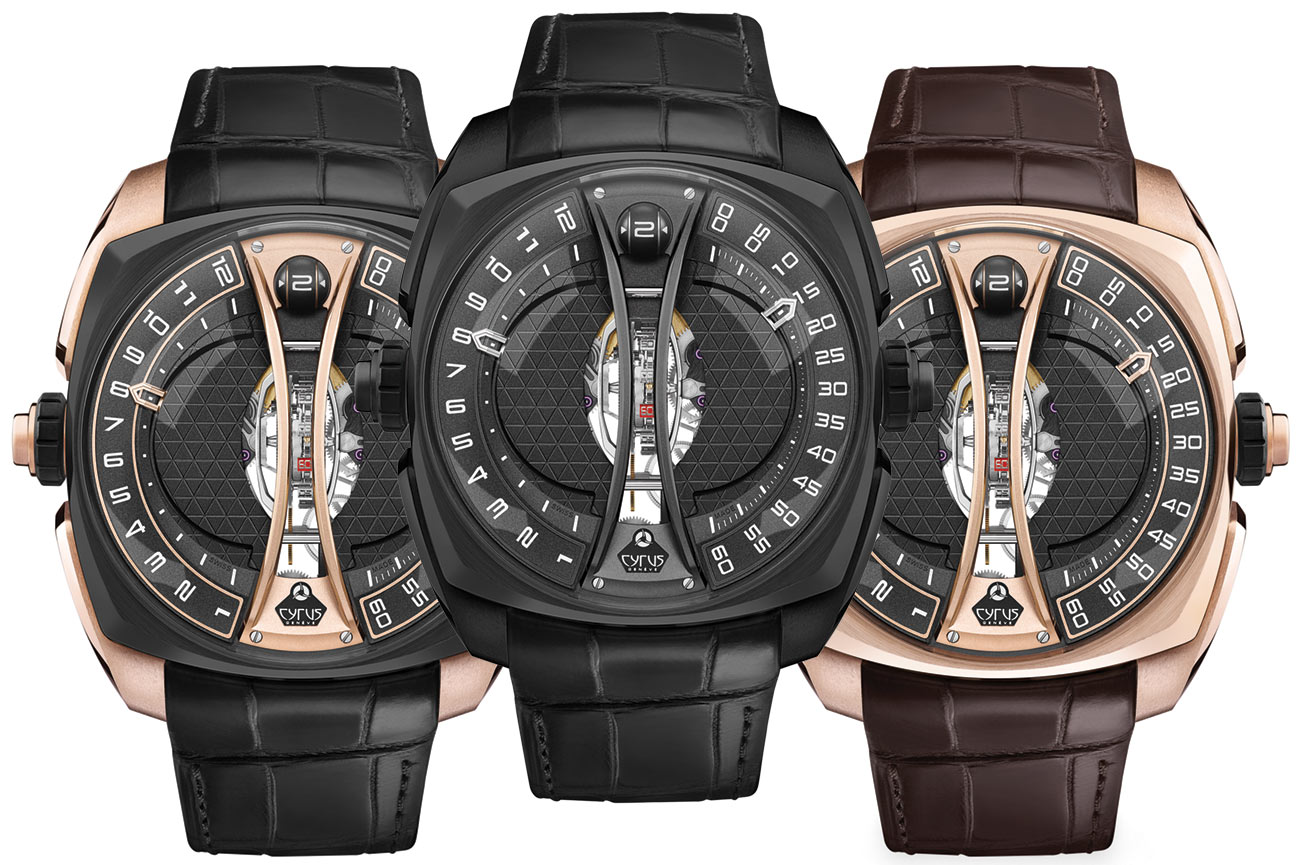 Its vertical tourbillon construction was designed with old tourbillon pocket watches in mind. Remember, pocket watches used to sit vertically in their owners’ pockets for long periods of time, and Breguet believed that in doing so, gravity would act on the escapement and balance wheel and negatively impact timekeeping. The solution, according to Breguet, was to rotate the entire escapement and balance wheel assembly so that positional errors due to gravity would be averaged out. Even today, the actual timekeeping benefits of tourbillons continue to be debated, so would this vertically-mounted tourbillon make the Klepcys Vertical Tourbillon any more accurate? Beats me. But does it look cool? Oh yes, most definitely. 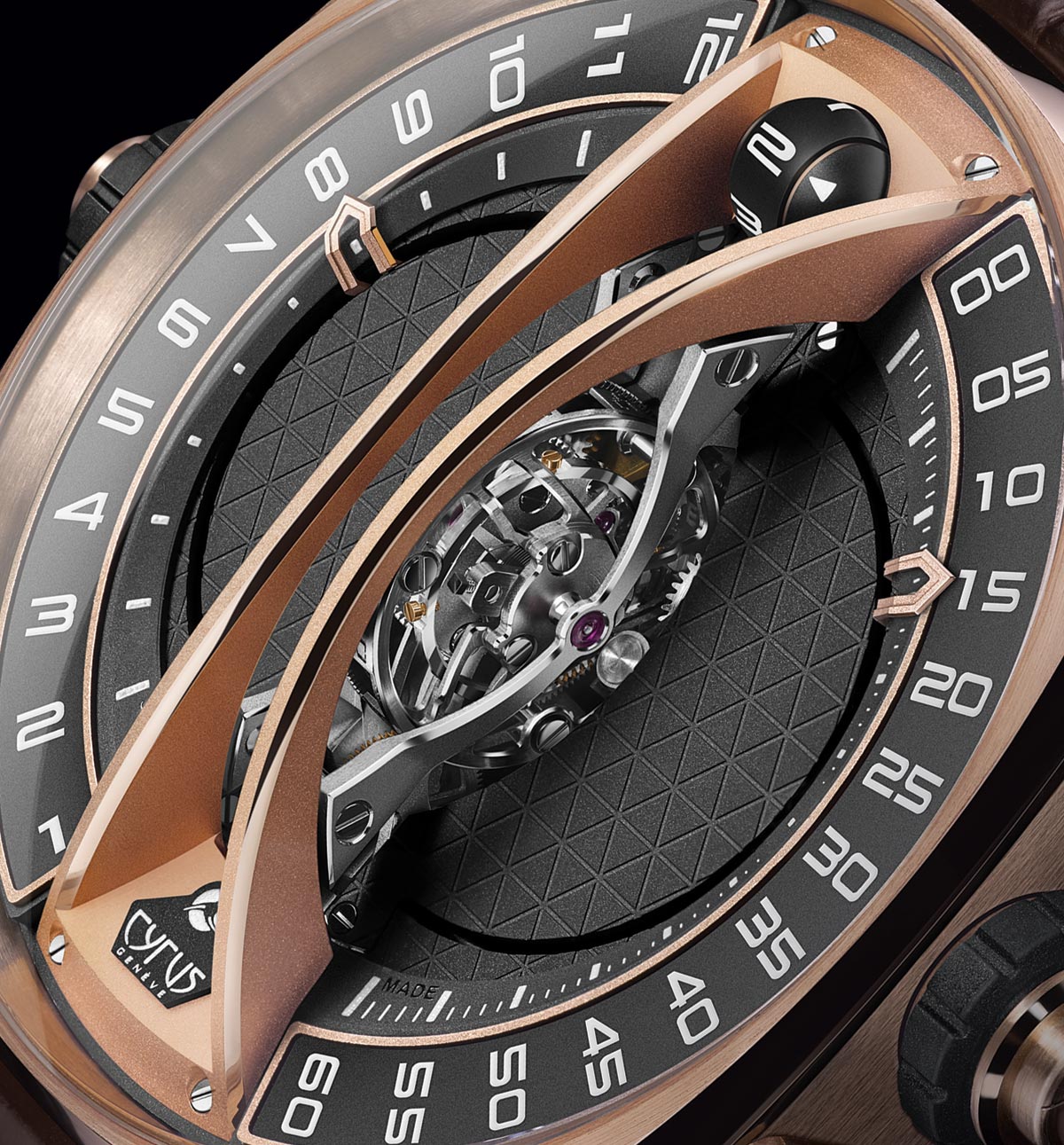 Without a doubt, the Klepcys Vertical Tourbillon is an interesting take on tourbillon watches. Its unusual aesthetics and movement probably mean that it’s not going to appeal to everyone, but I think it’s fair to say that at the very least it tries to be different. More importantly, I think, is that it does so without sacrificing legibility and functionality, which is something you cannot say for some of the other outrageous and unconventional watches out there. The Cyrus Klepcys Vertical Tourbillon is priced at $129,000 in titanium, $145,000 in two-tone titanium and rose gold, and $166,000 in full rose gold. All three models are limited to 38 pieces. Learn more at cyrus-watches.ch.