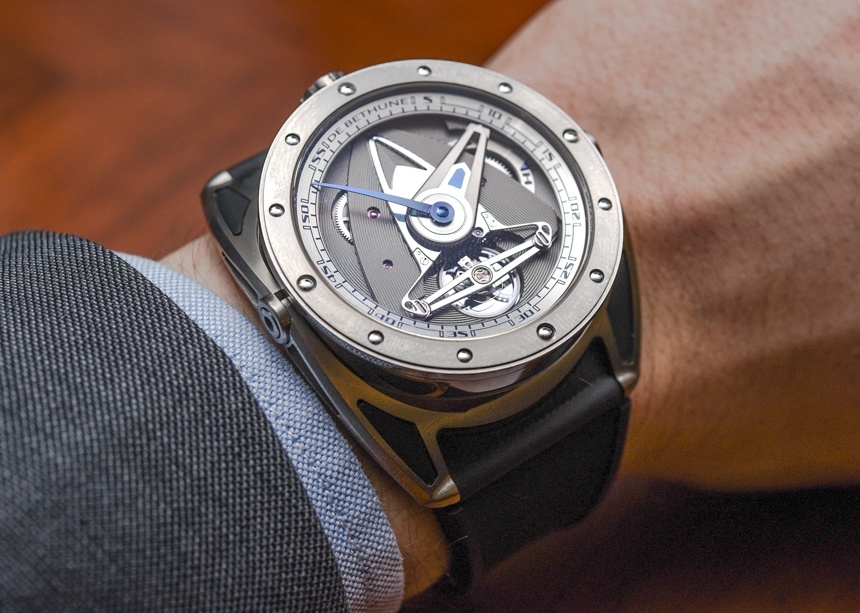 Anyone who knows the brand can spot a De Bethune from across the room, their distinctive styling and host of signature elements make them one of the most recognizable names in the esoteric world of independent haute-horlogerie manufacturers. De Bethune has kicked off the 2015 release season with the DB28 GS, a new addition to the DB28 family that offers a more sporty interpretation of the platform.

The “GS” in De Bethune B28 GS stands for Grand Sport, and De Bethune has endeavored to develop a more robust alternative to the DB28 we know and love. It is interesting to see how the DB28 has already had two very different versions, as the DB28 Digitale (hands-on here) and the DB28 Skybridge (hands-on here) both made for two very distinctive iterations of the same model.

The 44 x 11 mm case is rendered in titanium and treated to a hand-polished finish. The crystal is sapphire with double anti-reflective treatments, and the case back is solid and affixed to the case with eight screws. The DB28 GS still uses De Bethune’s floating lug system, which articulates at the center of the case and allows for a very comfortable fit, despite the larger case size. 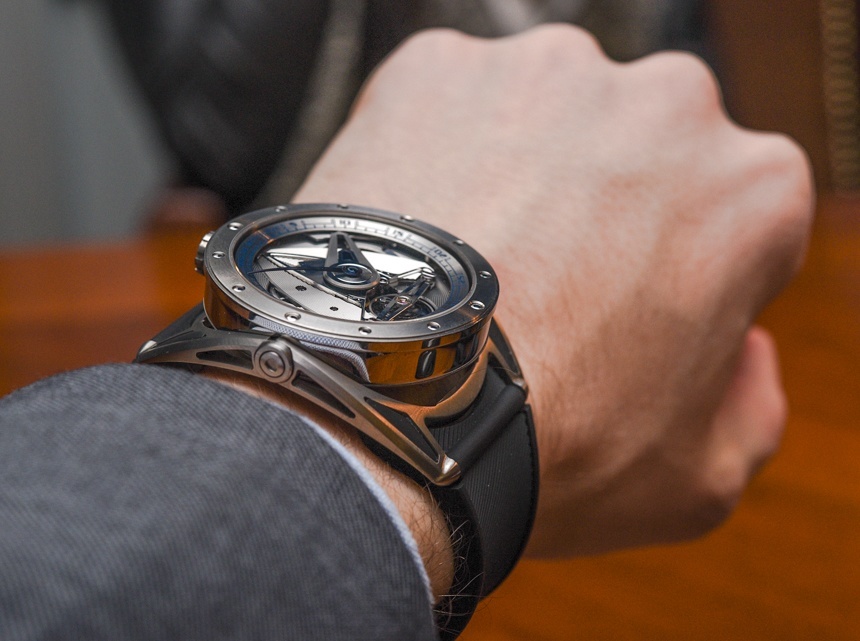 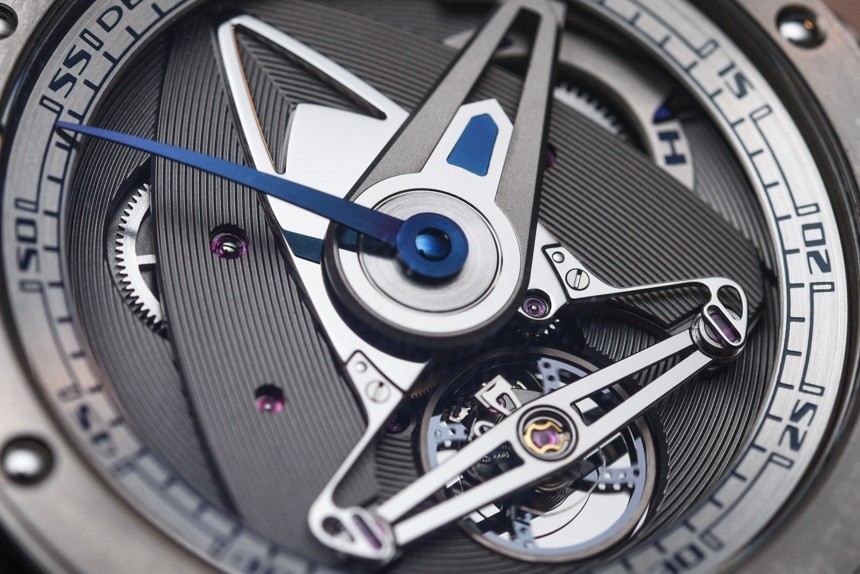 Mounted into those floating lugs is De Bethune’s first use of a rubber strap, made of natural rubber and sporting a grooving that matches the microlite finishing on parts of the movement. The combination of the floating lugs and the soft rubber strap makes the De Bethune DB28 GS one of the most comfortable De Bethune watches we’ve ever experienced. Mind you, the strap on this early model was on the stiffer side, with promises being made that the final version will have a softer and nicer looking rubber strap.

As noted, the floating lugs do make for a more comfortable fit even on smaller wrists, but when they have to articulate at a higher degree, the cylindrical case tends to stand out high. Regardless the rugged looks, the watch will likely have to suffer being hit into objects – like door handles, chairs, and other obstacles. Using a more positive approach, I would say the face of the watch looks like a porthole on a spaceship – that weird kind that resembles a normal ship but just happens to be able to travel through space and time. 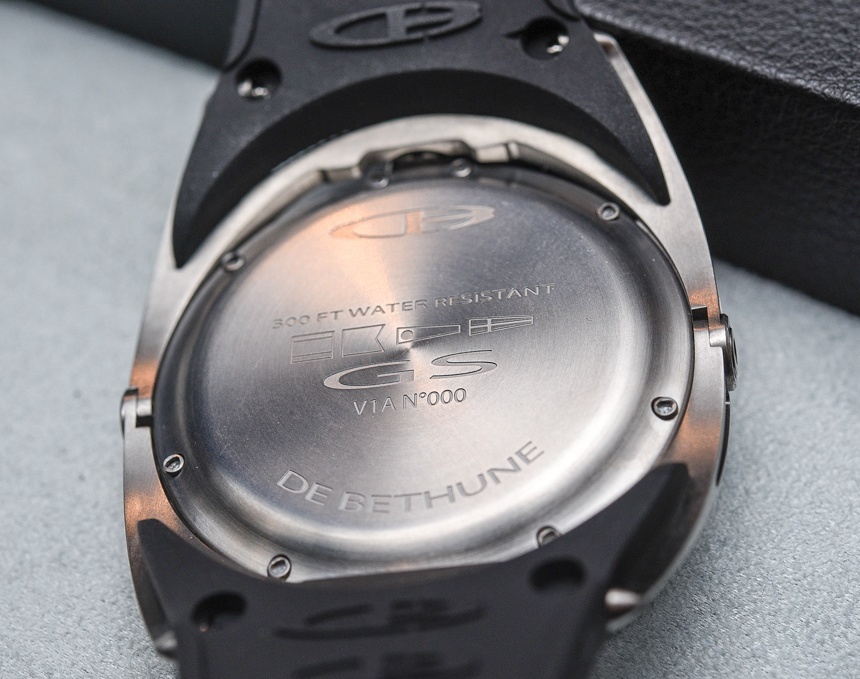 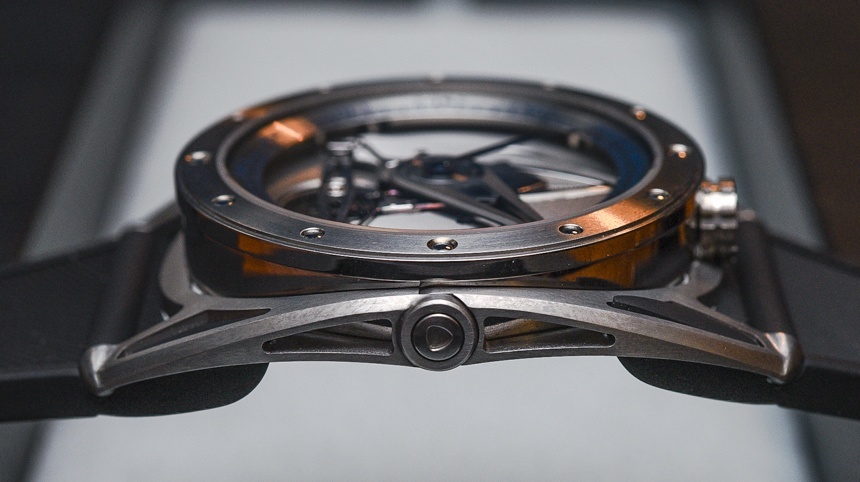 In step with the De Bethune DB28 GS’s sporty vibe, the DB2115 is protected by De Bethune’s triple pare-chute shock absorbing system that orients the heart of the movement into a separate bridge that is supported by springs. Additionally, the De Bethune DB28 GS is water resistant to 100m (300ft) and boasts a screw-down crown.

The movement – this time around, installed “upside-down” and fully exposed on the dial side – makes up much of the visible dial design. It is De Bethune’s DB2115, a 4 Hz hand-wound calibre with two barrels providing 6 days of power reserve. Complete with a silicon and white gold balance, as well as a silicon escape wheel, the DB2115 uses 37 jewels and has a power reserve indicator between two and three o’clock. Hours and minutes are present, but there is no seconds indication. 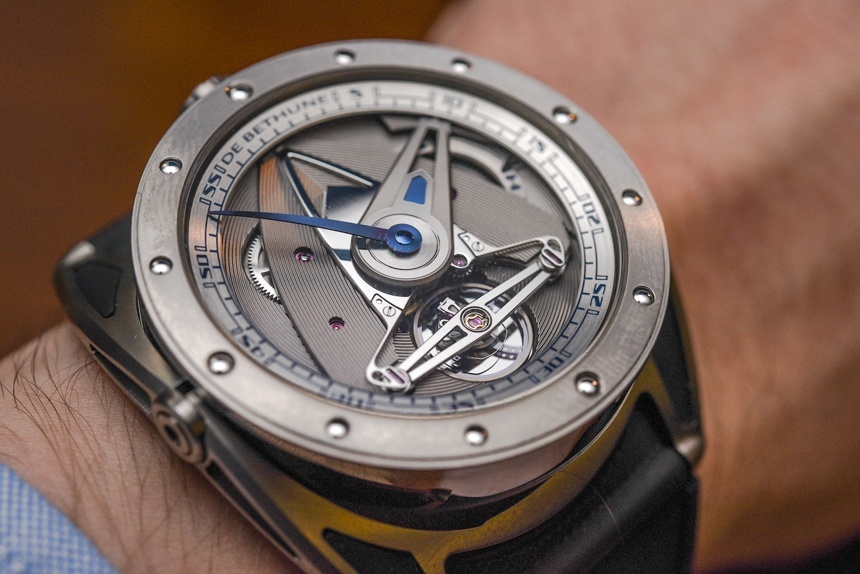 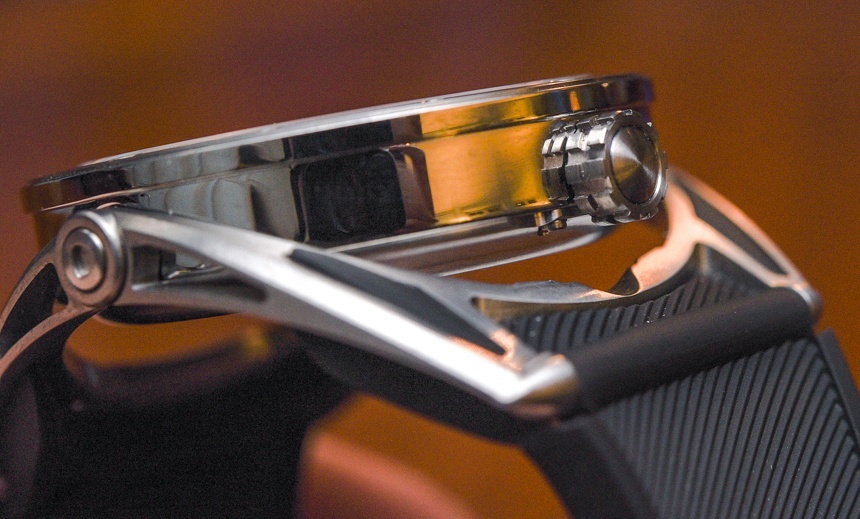 Regardless of the tech, it’s pretty hard to think of a De Bethune as a sport watch, which is likely equal parts due to the other-worldly design and the eye-watering $75,000 (69, 500 CHF) asking price. De Bethune watches are, and will continue to be, dream-like items for me. With the De Bethune DB28 GS, I guess I have simply traded my dream yacht for a speed boat or perhaps a day of heli-skiing in the alps – either way, it seems the GS will keep up just fine. debethune.ch