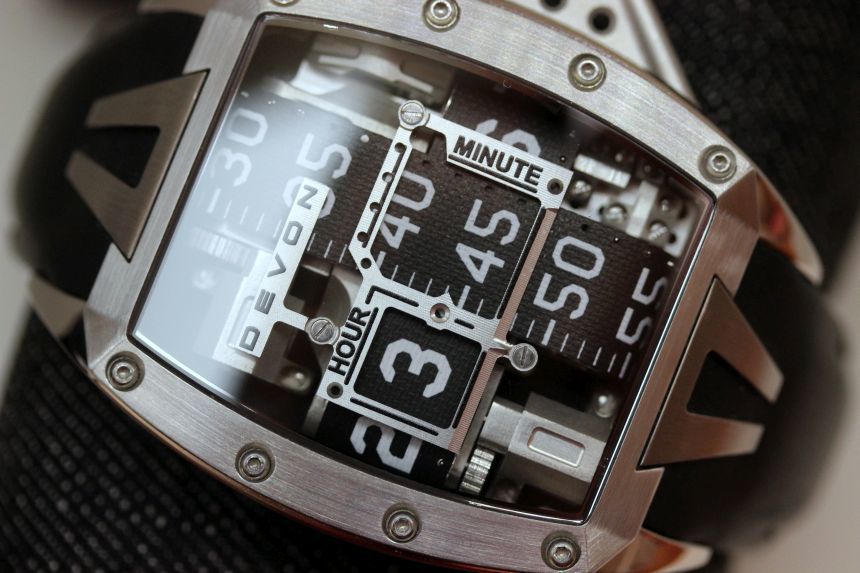 Coming as I do from an engineering (by training) and manufacturing background, seeing how watches come together is inherently of interest. Getting to see the movement at work is a visual treat, especially as the gears engage and mechanical work is done. Going in a totally different direction is the Devon Works Tread 2 Shining – but it is no less an impressive feat of engineering.

If anything, I could argue that a watch like the Devon Works Tread 2 Shining is actually more interesting in many regards that a classic mechanical watch. On the whole, I will go out on a limb and say this is definitely one of my top three skeleton watches. And make no mistake – this is indeed a skeleton watch. Think about it – what defines a skeleton watch? The fact that you can see, from the dial side, at least some portion, if not all, of the movement at work. That is precisely what you have here. Yes, the hour and minute belts cover some of the visual real estate, plus the metal cutouts that tell you what is what. Past that, you can see what is going on inside the case. And that’s just from the head-on view; tilt the case a bit, and you can get in to see more and more.

When you do that, you start to see what I would describe as complexity made simple. Another way of putting it would be complexity hiding beneath simplicity. However you want to coin that particular term, the fact is the same: The Devon Works Tread 2 Shining looks simple at first, and then becomes obviously more complex as you dig into the details. This is evidenced by the gears and machinery running things, of course, but there are other ways that this is revealed. For starters, lets talk about how the watch is powered. There is an internal battery running things that needs to be charged (nothing new there). But how do you charge it? Well, friends, that’s done via an inductive charging stand built in to the watch box (complexity in simplicity). You might be thinking, well, how often do you need to charge a time-only watch?

That is a valid question, but it’s not quite the right one. If you only use the watch in time-keeping mode, you probably will not need to charge it all that frequently. Especially if you turn the display off. That’s right, you can turn it off to conserve battery via a simple press of the pusher on the right. When you do that, it puts the display into a mode showing you the remaining battery life. Kind of a two-for-one, with that. Actually, three-for-one, as pushing that button also lets you see the belts in motion, which is a treat (and how I showed the watch off to those who asked about it). If you want to run the battery down a bit more quickly, there are other surprises hiding in the watch. For instance, if you want to see the running seconds for some reason, you can do that. This function (and the next one we discuss) are engaged by the lever that flanks the case. Putting things into running seconds mode means you lose the minutes readout (as it uses the same belt), but I guess minutes may not be as critical if you’re looking at seconds.

That is one way to time things. If you want, though, you can actually use the Devon Works Tread 2 Shining as a chronograph. That’s right – they managed to tuck a chronograph function into the watch. Now, as someone who normally is not a fan of chronos, this was a very lovely surprise. For starters, it is a function that is tucked away, and does not inform the design of the watch. Next, if you want to use the function, it is a very conscious action to get it going, and you can hear and feel it running – so you are not likely to forget it. These are the items, along with what you can see visually, that led me to think of the Devon Works Tread 2 Shining in terms of “complexity hiding beneath simplicity.” Simply put, there is a lot to get into with the details of this watch, and I think it will keep any mechanically-inclined owner interested and entertained quite easily.

Of course, if you are spending time looking at the watch, that means you’re also running around with it on your wrist. The tonneau-style case measures in at 42mm x 44mm, a height of 14.5mm, and an overall weight of around 90g. This means it is a bigger watch, but given how elongated the case becomes when you consider the lugs and tuning fork horns that extend out on the strap, it visually looks slimmer than the dimensions would suggest. At least it does from the top view – when you look at it from the side, you do see some of the bulk. With the belt technology, I am guessing that it is about as slim as it can be for now. Speaking of those belts, I do want to point out a few things. First off, when the time changes, it is very reminiscent of those old flip-number clocks. I had one of those in my room growing up, and it is a very distinctive noise. While it’s not exact (and I am going from memory), the Devon Works Tread 2 Shining has a similar sort of noise to it. Not overly loud, but there if you listen for it.

When the hour changes, that is a bit more noticeable, as the belt is moving longer than the minute belt. Again, not overly loud, but something that (unintentionally or not) sort of acts like an hour chime on a digital watch might – you can hear (and feel somewhat) the change of the hour, letting you know time has passed. At first, I was a little bummed that there was not any luminant to be found on the belts. Thinking about it a bit more, I realized that it would make for a poor user experience. If there was lume, only the numbers on top would be charged up, and as the belts rotate, you would end up left in darkness. So, it is really a practical concern more than anything.

If I was going to plant a bug in Scott Devon’s ear about this, it does seem like there could be some cool ways around this. First off, perhaps hiding a UV LED somewhere in the case could help. If we want to go really pie-in-the-sky, though, I would envision the noise/vibration that comes from the belt motors getting used in a sort of a minute-repeater fashion. That would be crazy complex, but could still hide in the simplicity of the design. And wow, what a hidden gem that would be on the watch! Enough with the dreaming – lets get back to the reality. The reality of wearing a watch like the Devon Works Tread 2 Shining is that it is eminently wearable. Yes, there’s no doubting that it is not a petite watch, but if you have spent time with modern dive watches, the size is pretty easy to adapt to. Just be prepared to show the watch off – even for people who are not in to watches, they recognize something different in it, and kicking the belts into motion (using the aforementioned “sleep” mode) really makes eyes light up.

There are several different variations of the Devon Works Tread 2 available, and we had the “Shining” variant in, which has a high-polish case (and other shiny bits), available at a price of $10,950. While this may not be the watch for the mechanical purists, this is the sort of watch that really makes me remember why I was drawn to watches in the first place. This is why it hit that lofty personal ranking I mentioned at the outset of the review. There is a wonder in having a tiny machine on your wrist, and the Devon Works Tread 2 Shining takes that concept and makes it look more like a miniature factory on the wrist. This is the sort of watch that can reignite that wonder for many, even us watch reviewers. Even if it is not on your radar to buy, if you have the chance to see one in person, I recommend you take that chance. With the Devon Works Tread 2 Shining, you will see something that you cannot find from any other brand. devonworks.com

Necessary Data
>Brand: Devon Works
>Model: Tread 2 Shining
>Price: $10,950
>Would reviewer personally wear it: Without a doubt, yes, yes I would.
>Friend we’d recommend it to first: This is for someone who appreciates the mechanical nature of watches, but wants something that is a bit more of an “ingenious industrial” feel.
>Worst characteristic of watch: About the only thing I would complain about was the fact that it cannot tell you the time in the dark.
>Best characteristic of watch: How simple they have managed to make the complexity of the watch look.