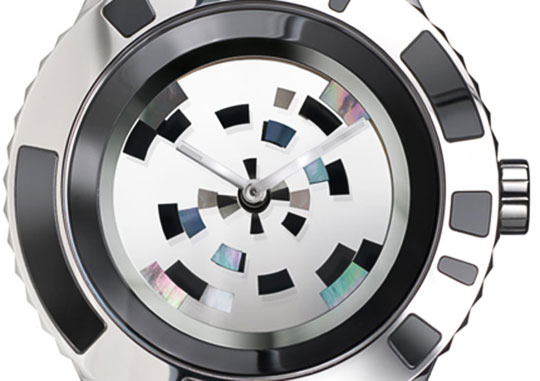 Dior Horlogerie. You may have a preconceived notion of what to expect, just based on the brand association at play. It is Dior, after all. Having such a solid foundation in fashion and haute couture, you can guarantee a beautiful facade. But is that all there is?

This is a true piece of art.

Although it’s initial designs were just ok – Dior Horlogerie is now successfully asserting itself as a daring brand to watch. Many watch critics like to argue the credibility of watches associated with jewelry and fashion houses, and try to downplay their value. But with designers such as Victoire de Castellane, Kris van Assche, and, of course, John Galliano, you cannot simply write-off Dior as just a pretty watch.

Pushing aside all inevitably comparisons to Chanel, it is exciting to see Dior step out on their own and reinvent their brand aesthetic for Dior Horlogerie – that is completely theirs. It was expected that comparisons to Chanel would arise, and at first, those comparisons did seem to influence Dior’s designs to their detriment. Inspired by their own rich fashion history – and the confidence to take some risks – they are finally ready to shake things up and move forward.

And as their website, Diorhorlogerie.com states: “Dior Christal combines the excellence of Swiss Watchmaking Workshops with the refined audacity of Avenue Montaigne.”

The entire Dior Christal Collection has been inspired by the fashion designer John Galliano, and his cherubic, ethereal take on life, is mystifying – just as the name suggests…. Galliano is definitely known for his crazy, other-worldly fashion designs… And with this model, his unique vision has been manufactured into a moving, working, piece in time.

At least, that is the target. The time part… well, that’s a little shaky.

Either way – the Dior Christal Mystérieuse is an amazing timepiece to behold. And it’s an interesting progression into horlogerie, to create a watch that is visually striking – but in truth, is not exactly functional as an easily readable timepiece.

Which does present a problem. It looks hot, and is very impressive looking, but does not exactly carry the function as of a watch.. Turns out though – the real thrill is on the inside. The Dior Christal Mysterieuse employs a sapphire crystal mystery movement developed by several pioneers in manufacturing – known as the Quinting Manufacture. A collaborative effort of five engineers, including 3 Swiss watchmakers, an automotive engineer, and an electro-technical engineer – this watch is not just remarkable for its aesthetic but for the work inside. Priced at 20,000 euros seems very democratic, when the years and levels of input are considered.

But then again – this is just a quartz movement. So it’s debatable about the price…

What’s most interesting about the Dior Christal Mysterieuse is that the electro-mechanical movement is always in motion. Featuring a total of six sapphire discs – the Quinting manufacture is composed of three fixed plates and three mobile discs rotate to indicate the days, hours and minutes. This mechanism allows the dial faÃ§ade to perpetually rotate, returning to its initial position only once a month.

The one down-side to all the mechanical achievements is that this is not exactly a legible timepiece. You must focus to decipher the precise time… but then again, who relies on their watch for time any more?

With all the delicate craftsmanship at work inside – the case carries a very hefty presence, too – A solid 44mm presence, that is. The Dior Christal Mysterieuse reflects the aesthetic of the Art Deco movement, with definite nods to Kinetic art – in that it contains moving parts and depends on motion for its effect. Inset in the steel case are black sapphire plates used to create the bezel design.

The dial is made up of various shades of Mother-of-Pearl, placed inside the sapphire plates, to reflect varying levels of luminosity, which completely transfix those even near this advanced timepiece. And at that point – after watching this watch in motion – who’s really looking for the time?

So again – pro or con – time should not be a factor in admiring the Dior Christal Mysterieuse.

One major mystery at play here, though, is which gender this was intended for… It was suggested to me that this is a man’s watch. And I’ll agree, the black leather band is quite masculine…

But really – this is a feminine watch – there is so much mystery and illusion at play here, that totally reflects feminine notions. The Dior Christal Mysterieuse is also an amazing example of the watch as an adornment, even more so than the watch as a piece of jewelry. With so much engineering at work here, such sultry design, this watch speaks volume of the personality of the wearer.

And, depending on what Galliano was thinking – I believe this would be better suited on MY wrist…

As luxury is redefined, such pieces of true artwork – true couture – kinda horlogerie – will be the future – instead of purely ornamental watches.

And I personally am excited to see what Dior Horlogerie designs next. www.diorhorlogerie.com