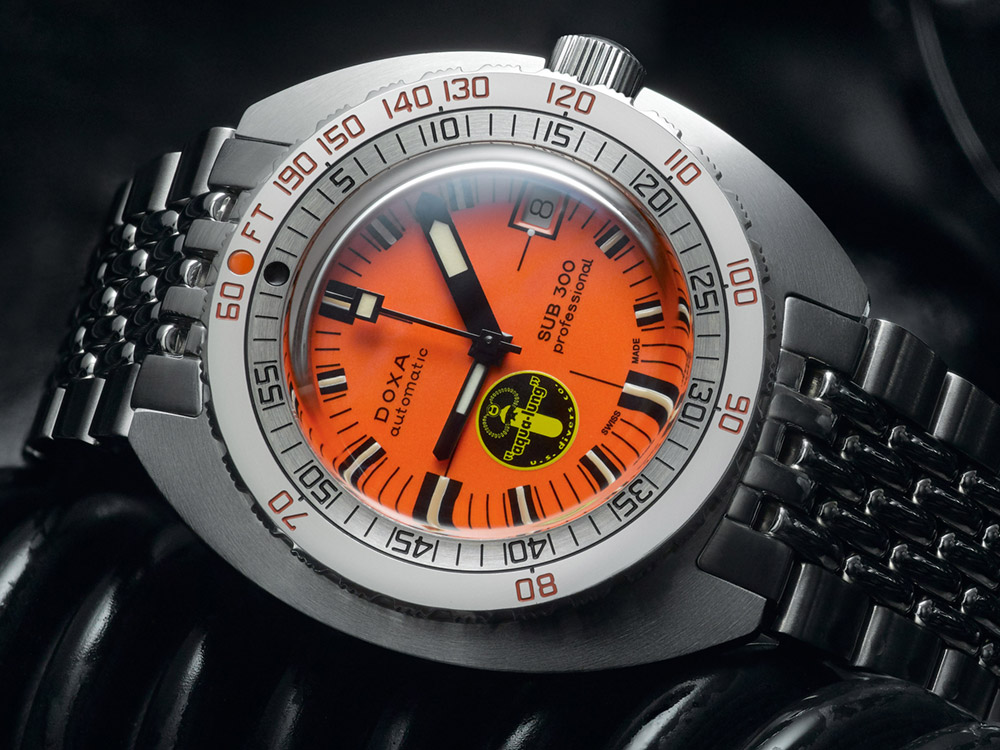 Long before we had Zenith and Land Rover, the long-running canon of watches and brand partnerships was forged on the track and beneath the waves by names like Heuer with British automaker McLaren, and Rolex with experimental diving organization Comex. But bearing an equal share of significance (and a similar timeline of the latter) is the partnership between dive gear manufacturer Aqua Lung and DOXA. However, while the aforementioned partnerships have since faded into watch lore, DOXA is again partnering with Aqua Lung, this time to celebrate the dive gear manufacturer’s 75th anniversary by introducing a very special watch of its own: a re-issue of a rare DOXA Sub 300 prototype, originally nicknamed ‘Black Lung’ by collectors. 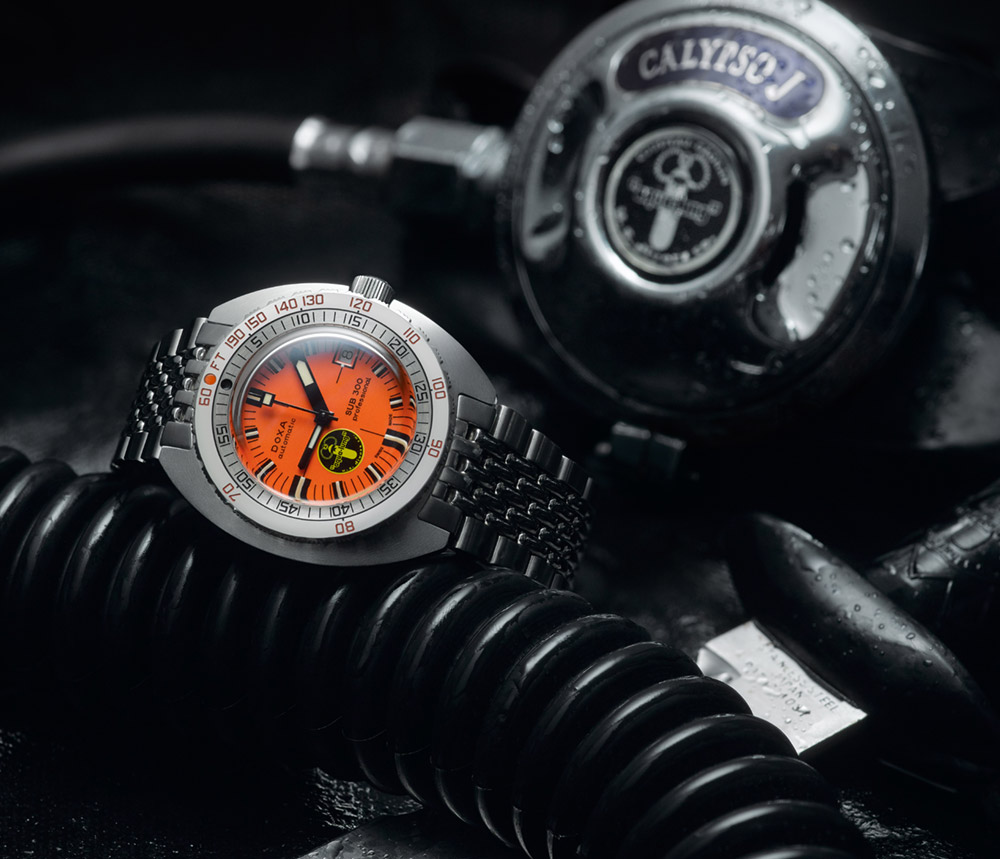 This edition isn’t just a reproduction of a vintage watch though – it’s an official rebirth of the Aqua Lung partnership that helped put DOXA on the map in the late sixties. Back then, the Sub’s quirky, purpose-built design, bright orange dial, and dependability at depth ultimately won it the approval of Jacques Cousteau – the godfather of modern diving and the inventor of the original self-contained underwater breathing apparatus (then dubbed ‘aqua-lung,’ now more widely referred to its acronym: ‘scuba’) in 1943. Cousteau’s company US Divers helped distribute the watches in North American dive shops, but would eventually consolidate both his Aqua Lung and US Divers ventures under the singular Aqua Lung name in the late nineties. Despite the co-branded watches ceasing production in the late seventies, the DOXA partnership remains an important milestone for both brands in the development of the rapidly developing recreational diving market. 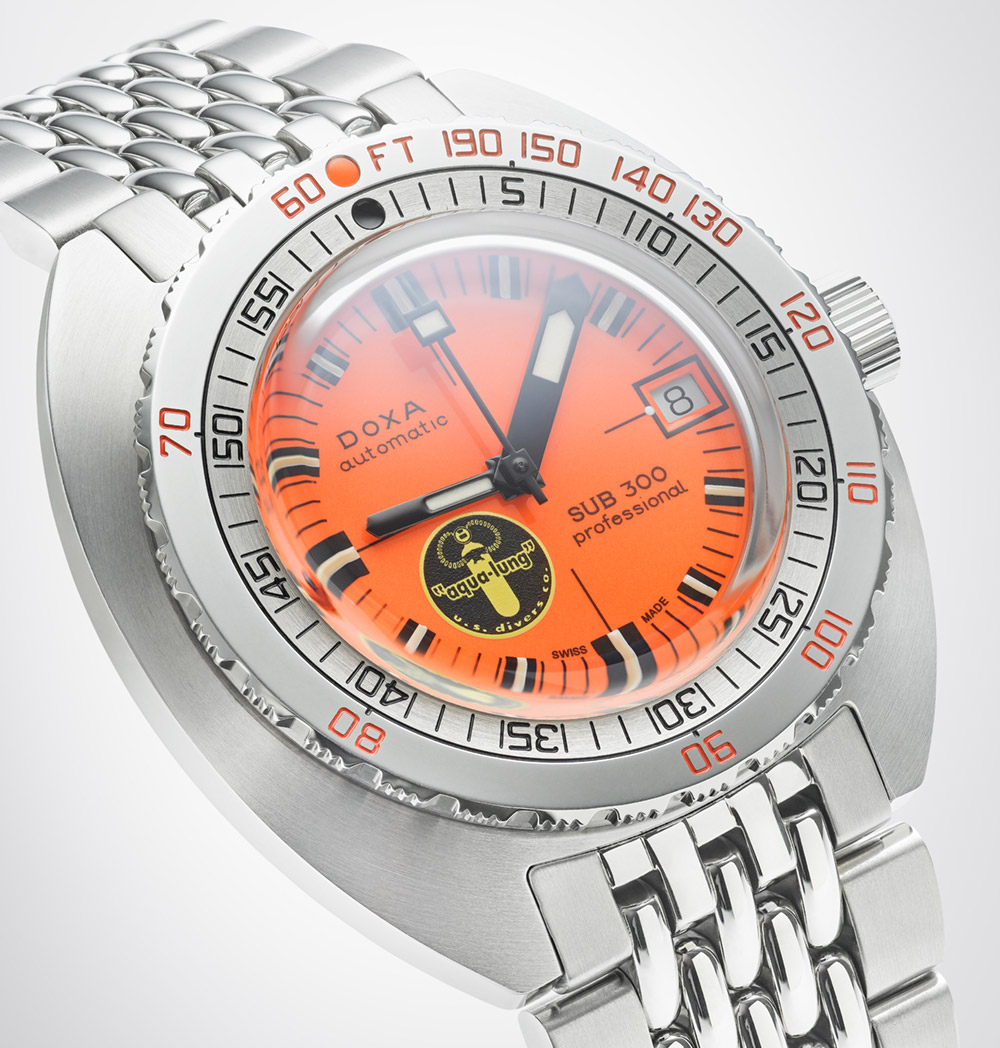 Nicknamed ‘Black Lung’ for its yellow-on-black US Divers and aqua-lung logo, the 1967 vintage edition was only produced in extremely limited prototype form, as it was quickly discovered that the black logo ‘hid’ the black seconds hand, and the design was soon updated with the un-filled, lined Aqua Lung logo version most vintage DOXA fans are now familiar with. With reference to this detail, the seconds hand is probably where the re-issue is the least faithful to the source material, as it is fully lumed and easily contrasted anywhere on the dial. 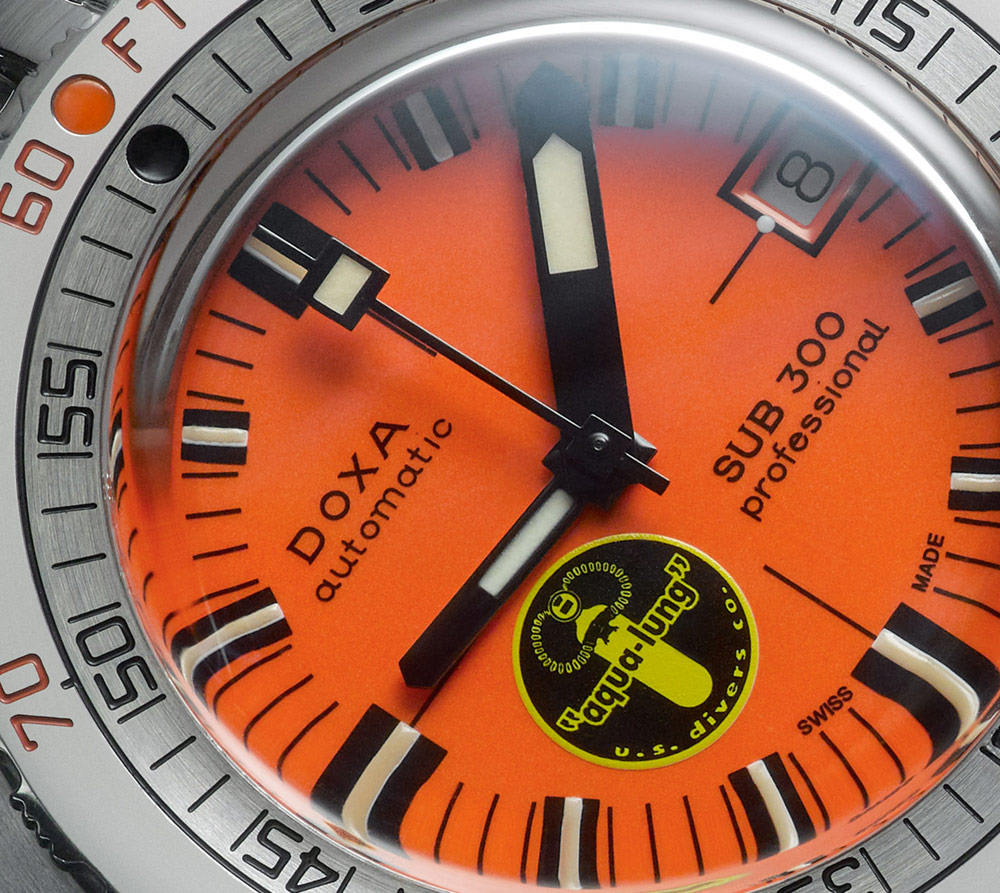 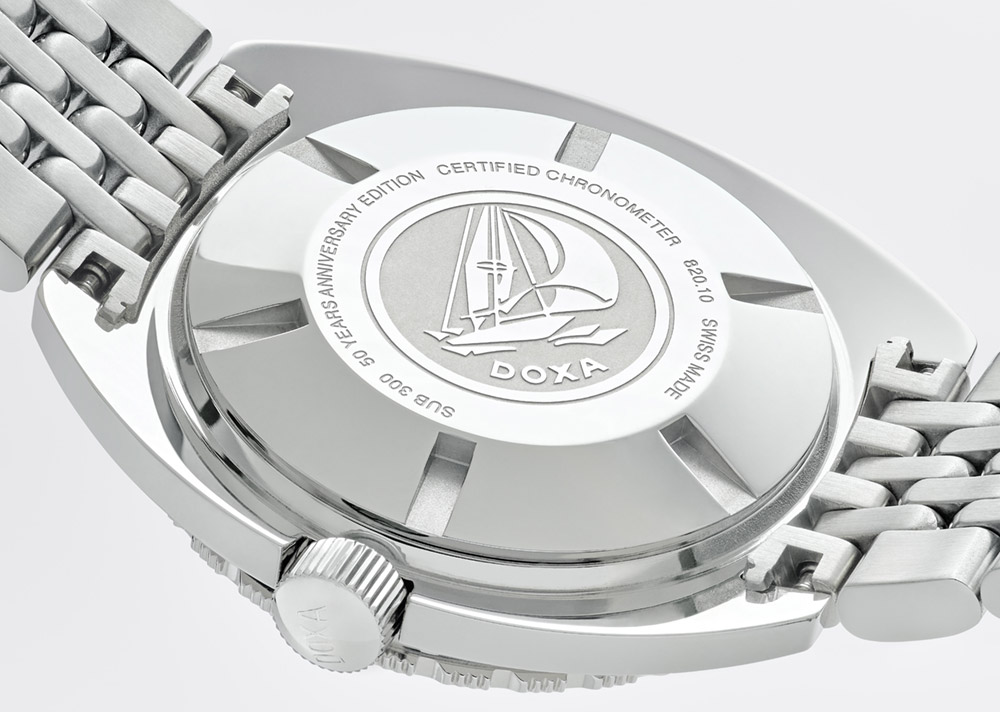 Otherwise, nearly everything else with the Sub 300 ‘Black Lung’ Re-Issue is a pitch-perfect homage to the original. It’s built around DOXA’s 50th Anniversary re-issue case – a relatively modest, 43mm x 13mm case (which was massive for its time when introduced in 1967), and topped with the brand’s signature patented “No-Decompression” rotating bezel. Thankfully, progressive trends towards larger watches over the last 30 years enabled it to age gracefully into the modern age. Inside ticks a chronometer-spec ETA 2824 movement, which is an upgrade from most of the modern DOXA collection which uses Sellita and Soprod movements. The watch is completed with a generously domed sapphire crystal (another modern upgrade over the acrylic of the original) that lends a subtly distorted ‘porthole’ effect when viewed at side angles. 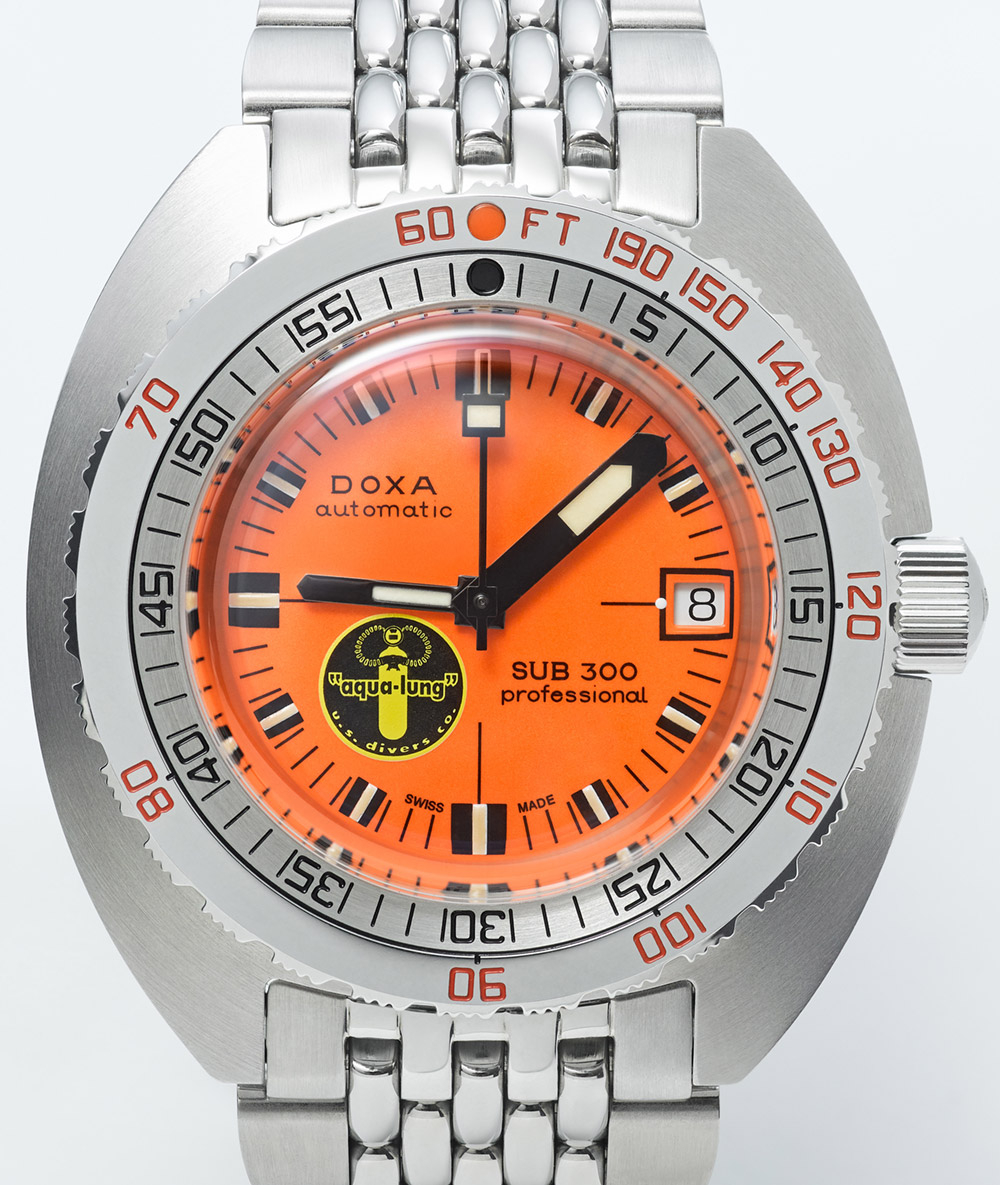 Given the extreme scarcity of the original, it’s widely considered a grail watch for many vintage dive watch collectors, including ablogtowatch alumni and Analog Shift founder James Lamdin. That collectibility has also led it to be one of the most sought-after modern re-editions, but one that DOXA was unable to reproduce without Aqua Lung’s official blessing. Apparently though, the modern Black Lung is also destined to be quite scarce – rumor has it that all 300 pieces of this limited edition have already been sold in the 24 hours since it became available. Should any still be up for grabs, you can obtain one for the special pre-order price of $2,190. doxawatches.com