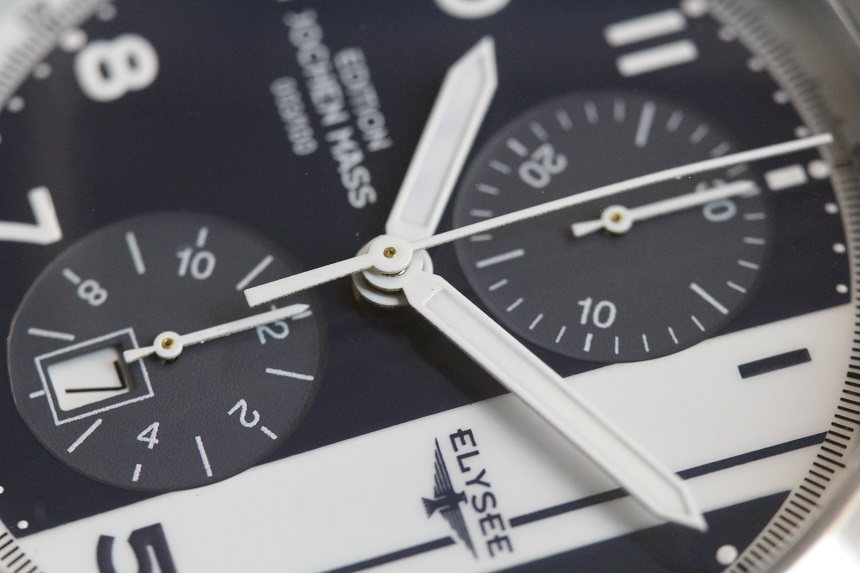 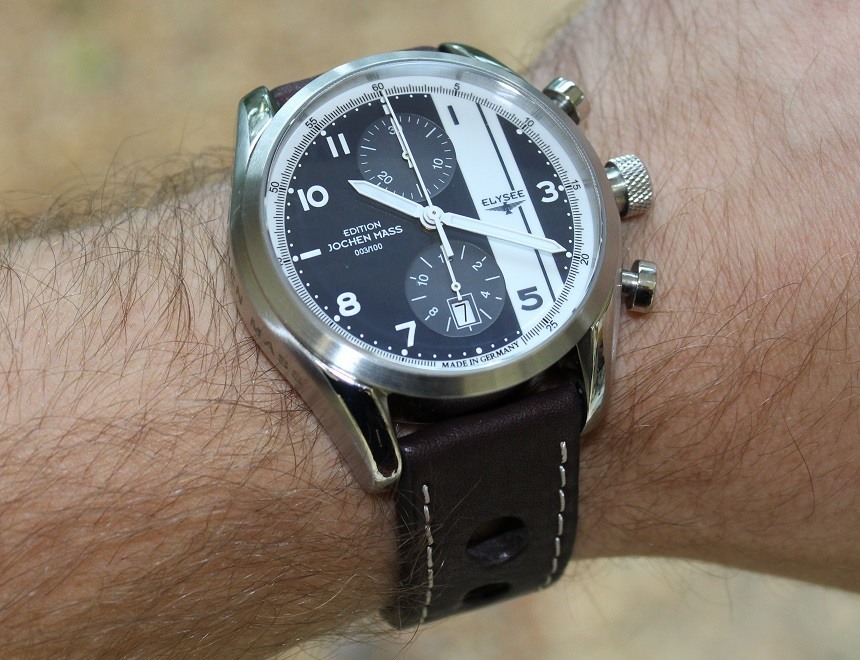 I like it when something changes my mind. I’ve never regarded myself as particularly inflexible in my likes, dislikes, or opinions on anything, but the process of transformation is an empowering experience. It’s nice to know I’m not an old stick-in-the-mud and that I can give credit where credit’s due. All credit to the ELYSEE Jochen Mass Magny Court Special Edition watch, which is responsible for this warming epiphany. ELYSEE is a small brand based in Düsseldorf, Germany. They’ve been around since 1960 but had slipped under my radar until I was sent the ELYSEE Jochen Mass Magny Court Special Edition to review. I’d seen the pictures of the watch online and wasn’t immediately and totally impressed; I opened the box and I could sense there was something to happen – I strapped it on my wrist and wore it for a fortnight, and kind of fell in love with it a little bit. 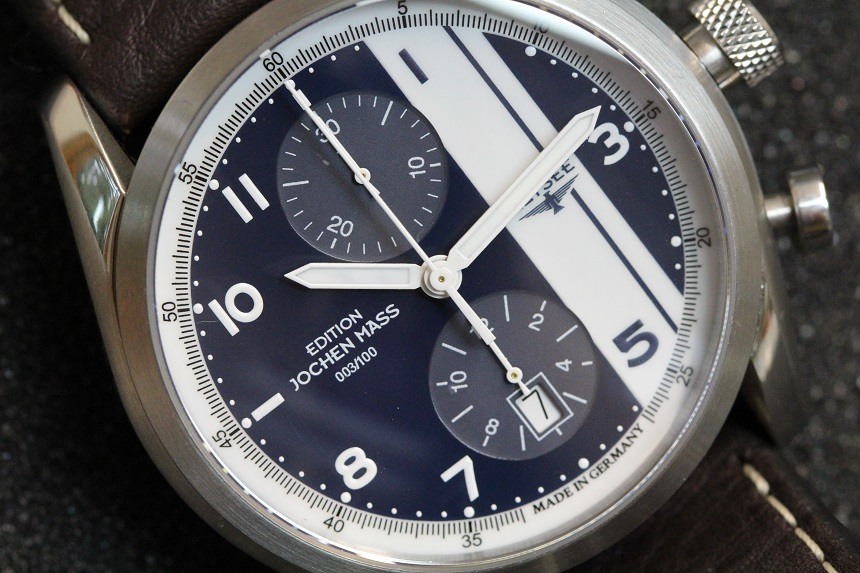 Or maybe a lot! My attachment to the watch is still growing, but it is not without flaws. First things first, for all you luminant freaks out there (and I am proudly one of you), it isn’t great news. The lume is functional enough, but not the brightest I’ve seen and absent from the dial entirely. Saying that, lume is not a major part of this watch’s design and so the Magny Court Special Edition doesn’t suffer too much from this slight let down.

Moving on from the hands to the dial: The ELYSEE Jochen Mass Magny Court Special Edition is limited to 100 pieces, and has its serial number printed on the dial at 9 o’clock. I am a massive fan of serial numbers being dial-based rather than externally engraved. For one thing, a dial is loads cheaper to replace than a case but, more crucially to the consumer, much harder to damage. Whichever part of your watch features the serial number is the most important part in terms of collector value. Putting the unique element of your watch in the safest place possible (inside the case) makes a whole load of sense to me. 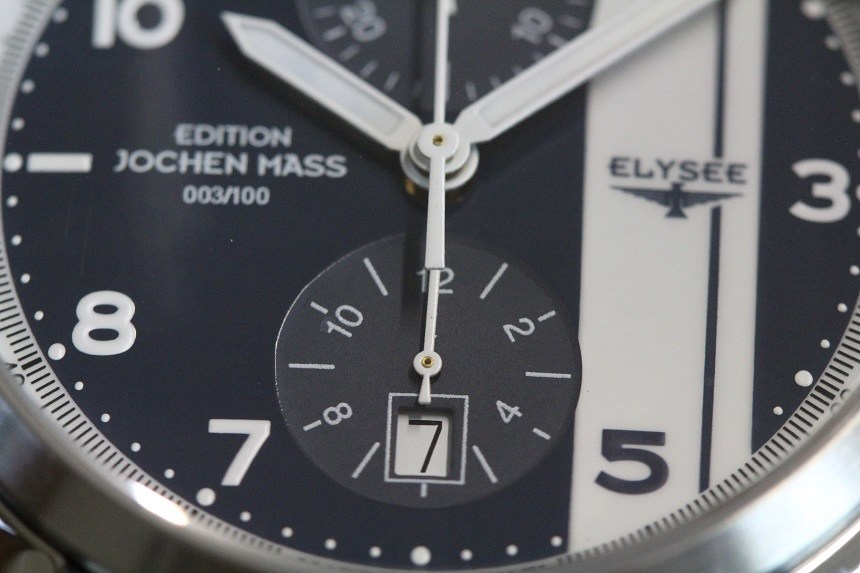 The dial design itself is a cool, bichromatic navy and white racing-stripe-inspired motif. The two white bars run vertically on the right-hand side of the dial. This is far and away the most striking design feature of the watch and garnered a lot of positive comments. It was also the element of which I was most unsure to begin with, but the component that has seen the greatest turnaround in opinion. I think it is great now. At first, I thought it a bit dull; now, I see it as complimentary and characterful. It doesn’t scream or shout; it goes well with most outfits of a masculine palette. But it does have a definite personality – it is all about racing, about the sense of speed! 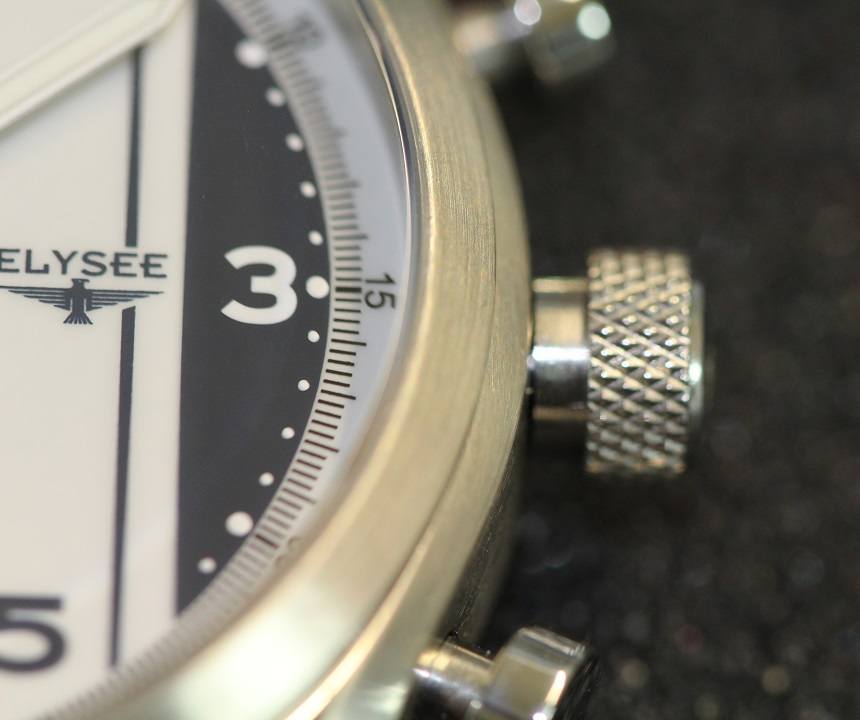 Jochen Mass is a former race car driver, who briefly competed in Formula One during the 1970s. With one F1 win and many other accolades to his name, he is something of a German national hero. Nowadays, his legend is perhaps better known in his homeland and by serious motor sport enthusiasts, but this watch aims to bring his story (which really is quite interesting) to a wider audience. Admittedly, I knew little of the man before receiving the watch and delving into his past, but I can see now why ELYSEE thought he would be a good inspiration for a timepiece – especially a chronograph. 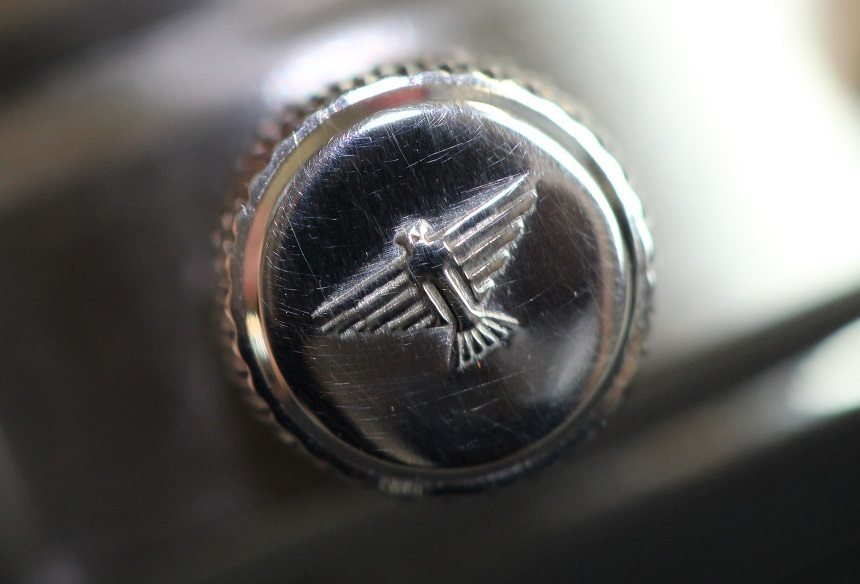 One thing I was a little disappointed with was the lack of a tachymeter scale on the dial. There’s plenty of space within the 44.5mm stainless steel case. So often they seem to pop up when unwanted or unnecessary these days, it is a little confusing as to why such a simple complication would be omitted on a racing chronograph. 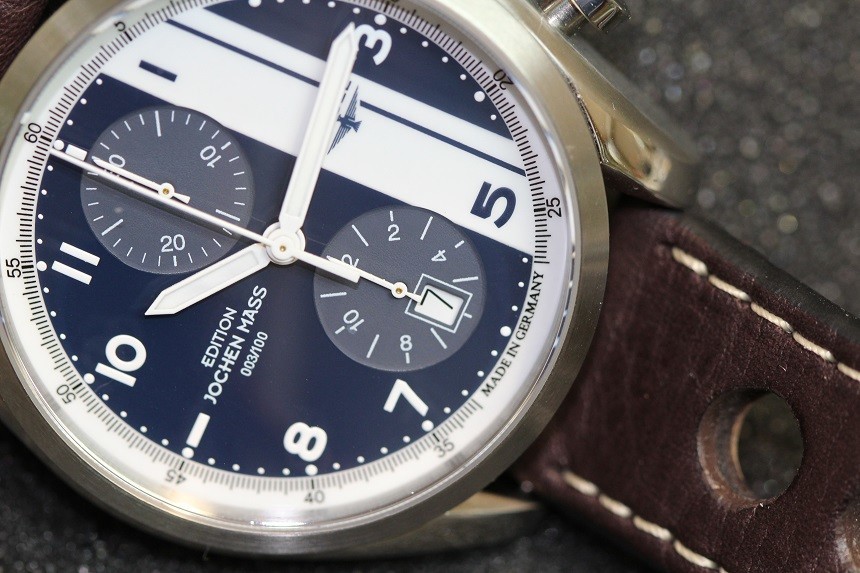 If a tachymeter should be on any watch, then this is it. I would guess that ELYSEE did away with the feature in favour of dial balance and symmetry, which is very, very good. Considering the racing-stripes could have imbalanced the dial, the end result is one of clarity and equilibrium. The hour markers are nicely sized and in a soft, Arabic font that is at once cool and legible. The surrounding seconds ring is very finely printed, with five (yes, five) lines marking each second. It manages to look tool-like and not at all busy, which I like. The pad-printed dial is certainly of decent quality, and although all on a single level, very good quality for this price point. 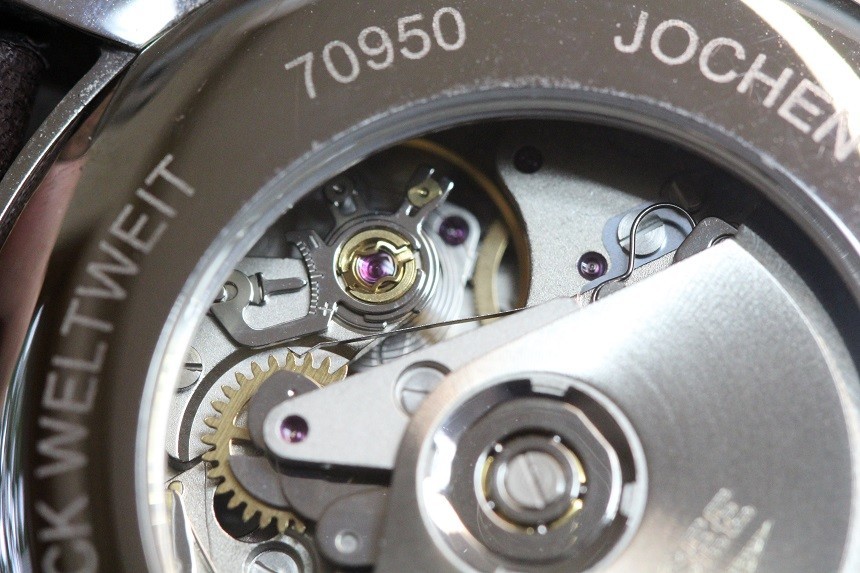 Considering this watch is powered by a Valjoux 7750, and has a stainless steel case that has at least custom engraving on the left hand flank, you might expect to be paying a lot more than ELYSEE are asking. So how did they get a watch of this quality for such a reasonable price? Well, it seems a couple of corners had to be cut somewhere, but where? And, more importantly, can they be overcome? 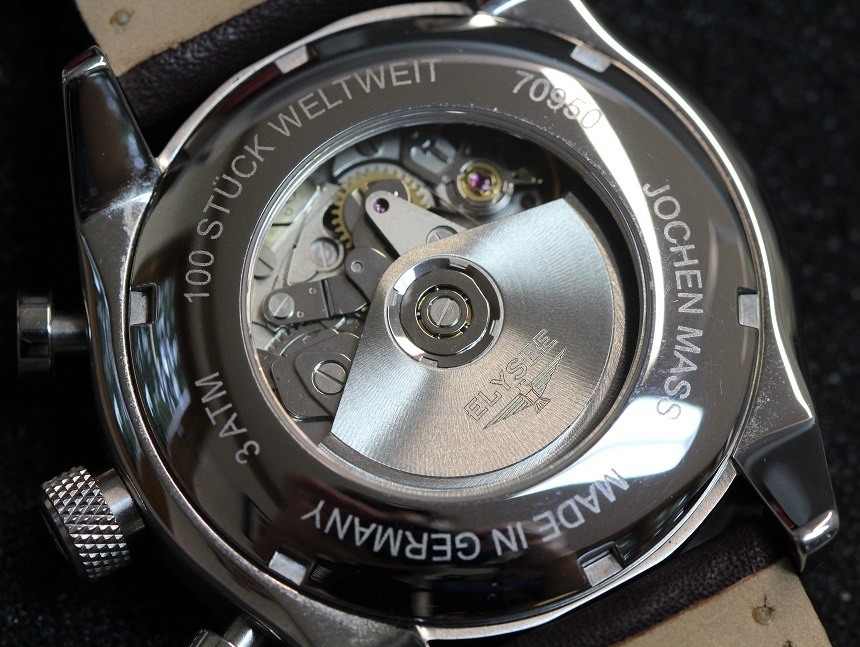 Aside from my experience with the lume, which I’m sure is very, very rare, the main drawbacks of this watch are as follows: the Valjoux 7750, although reliable and accurate, is of standard finish. This isn’t anything to do with its performance, but it is a shame that the view through the display case back isn’t a bit more exciting. The rotor weight has been decorated with ELYSEE’s logo, which is a great touch, but the movement is not as highly-finished as the brand’s cheaper models (but they do use Asian movements as opposed to Swiss). Secondly, the case, although high-sided and generally robust, is only water resistant to 30 meters.

For me, this is not a problem, as I never swim or shower with a high-value mechanical watch on my wrist, but for some people, this could be an issue. Thirdly, the glass is hardened mineral as opposed to sapphire. I like an anti-reflective sapphire on my watches (not just for photographic reasons, although it does help!). I am forever terrified of scratching mineral crystals, but, on the plus side, they are always cheaper to replace than sapphires. So my advice is, if you’re going to damage it, make sure you damage it so badly even a sapphire would have shattered. That way you’ll feel really good about shelling out for a replacement. 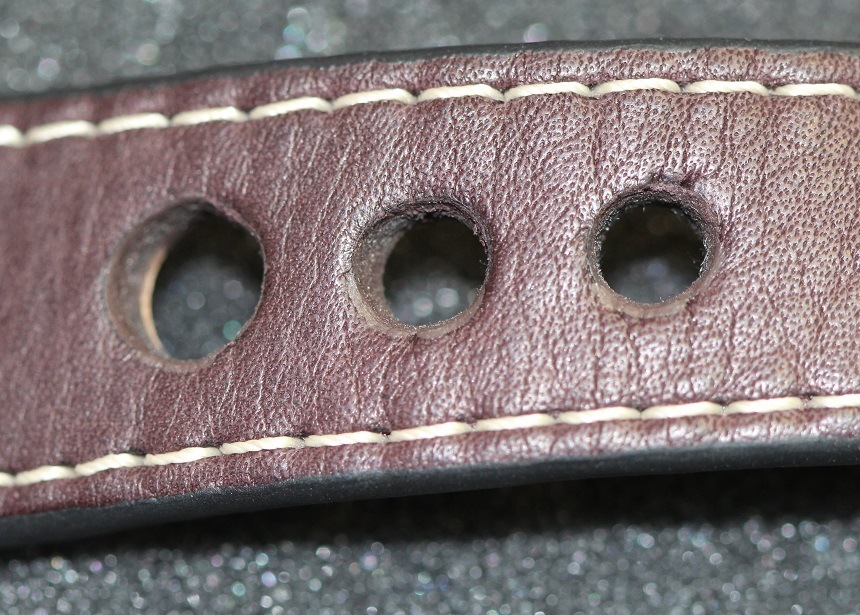 Finally, and most notably, in my opinion, the leather strap is just not my cup of tea. I like perforated racing straps, I really do, but the quality of this one is inferior to many other things on the market. The standard buckle bears the ELYSEE eagle logo, which is perfectly dimensioned for the job. The test piece I was sent had a plain buckle on it, so that’s why I haven’t included any photographs of it. 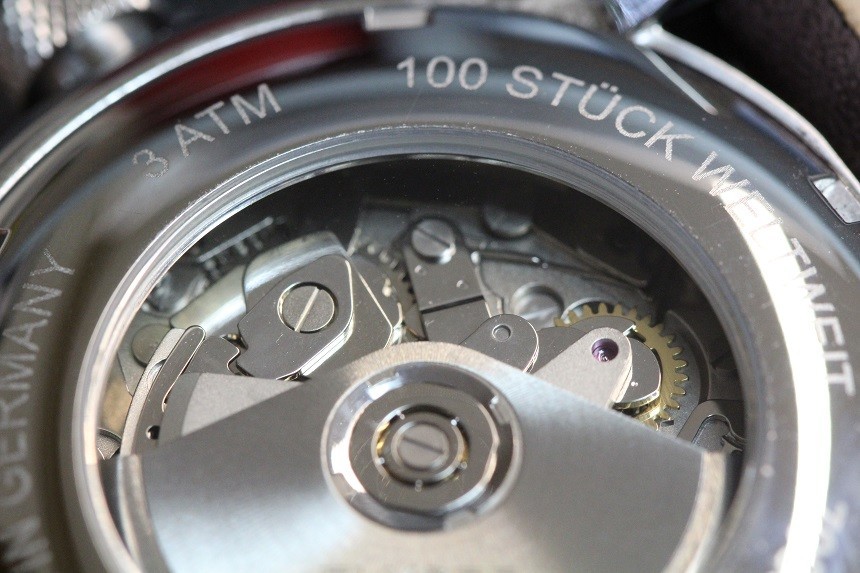 It’s an afterthought. I don’t like it when details like this are overlooked. To combat my annoyance with this element, I took the strap off after a couple of days (using the included strap tool, which is a real bonus) and I replaced it with a rubber NATO. I think the watch now looks a lot better, but that’s just my opinion. The strap is easy to change because the spring bars are thin and the springs very forgiving. I suppose this is just as much a negative as a positive due to the possibility of them popping loose. It hasn’t happened to me, but then, I don’t go bashing my watch around willy-nilly. 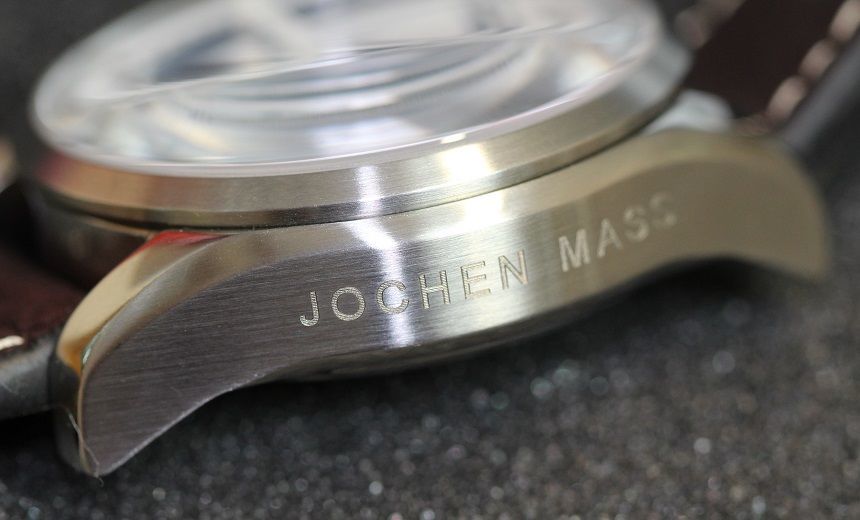 Overall, this is a versatile, wearable watch. It is large on the wrist, but not uncomfortably so. It would work better with casual attire than formal, simply due to the height of the watch, which is 17mm. The chronograph (12/6 o’clock sub-dials showing the minutes and hours respectively), and date window at 6, are great, simple complications. The crown is very well knurled, winds beautifully, and sports the brand’s logo, which is excellently embossed. 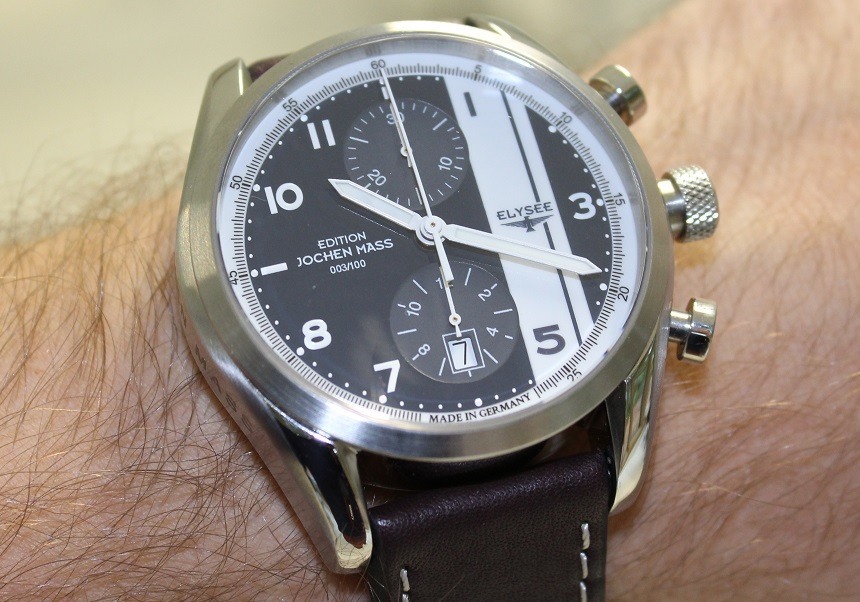 The pushers are classically styled and congruous with the general mien of the design. I prefer more solid pushers from a purely practical point of view, but can’t deny that these look great on this timepiece. There will only be 100 ELYSEE Jochen Mass Magny Court Special Edition watches made, and they will be available on the leather strap or a Milanese mesh bracelet for €100 more. The price of the ELYSEE Jochen Mass Magny Court Special Edition on leather is €1,498. The watch comes with a 2-year warranty and is available online or from selected retailers. elysee-watches.com

Necessary Data
>Brand: ELYSSE
>Model: Magny Court Jochen Mass Special Edition
>Price: €1,498 on leather, €1,598 on steel mesh
>Size: 44.5mm wide
>Would reviewer personally wear it: Yes.
>Friend we’d recommend it to first: Someone looking for a budget mechanical watch that has moderate versatility, but didn’t want to buy a Seiko.
>Best characteristic of watch: The build quality in regards to price is rather pleasing. You can easily pay three times as much for a brand utilising the same movement in a similarly styled case.
>Worst characteristic of watch: The strap is awful. It looks and feels like an after market knock-off. Easily remedied, though, so no big deal.