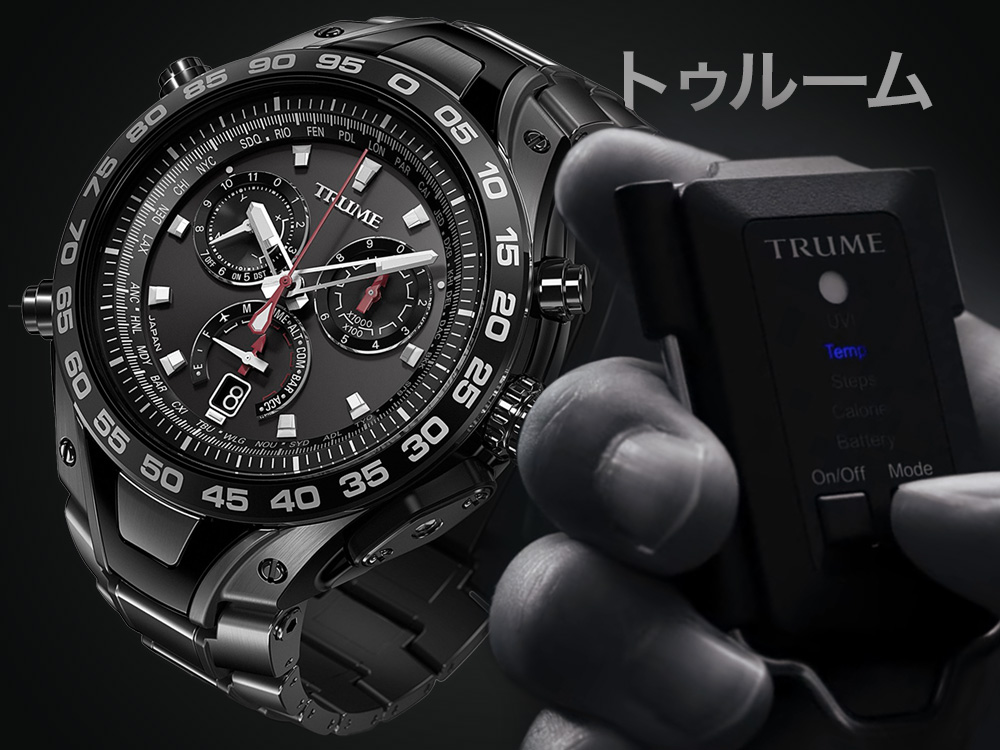 Epson Trume: The Most Advanced Analog Watch Ever Comes With An External Sensor 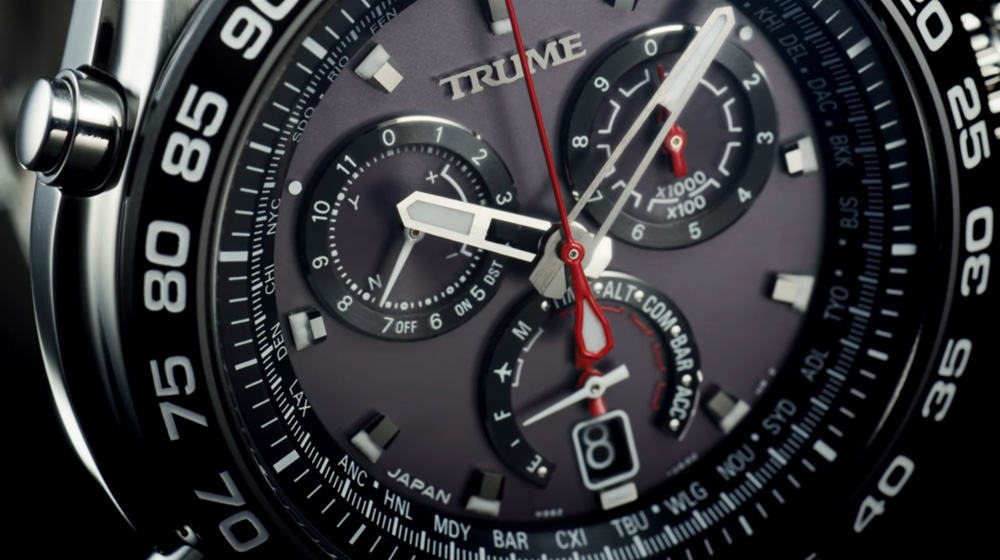 In essence, the sensor gathers data which it cannot display, but can transfer via Bluetooth to the watch, which in turn displays said data mainly via the red hands. It is here where we’ll add that the Bluetooth functionality of the watch is limited to communicating with the sensor, there is no app or anything like that to allow the watch to work with a smartphone or other device. Just like how the chronograph hands are neatly separated by color on more thoughtfully designed watches, on the Epson Trume the red hands are the ones primarily linked to displaying information linked to the additional features. 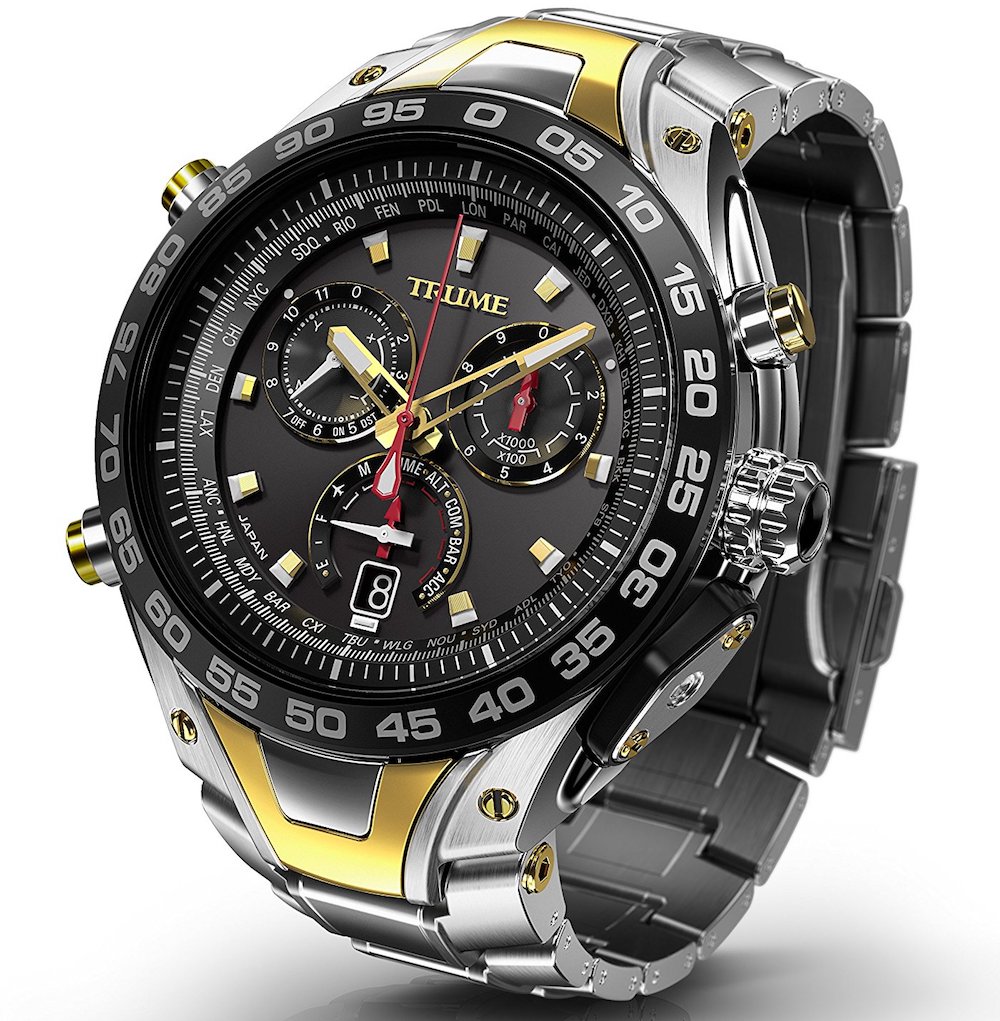 First, select the feature you want to know more about on the remote via the Mode selector button, then set the mode of the watch to ACC (displayed on the lower sub-dial) using the lower left pusher. Initiate gathering data with the upper right pusher – the white hand of the lower sub-dial will point to “M” for measuring (presumably). Once the data is received from the remote thingy, the central red hand will give you information from 0 to 99, while the upper right sub-dial will do the same from 100 to 9900.

Things get pretty straightforward from here: temperature is displayed on the center (the hand on the upper left sub-dial will point to a little “-” or “+” on the dial to tell you if it’s minus or plus degrees of Celsius), and displaying your step and burned calorie count will work largely the same way as well. 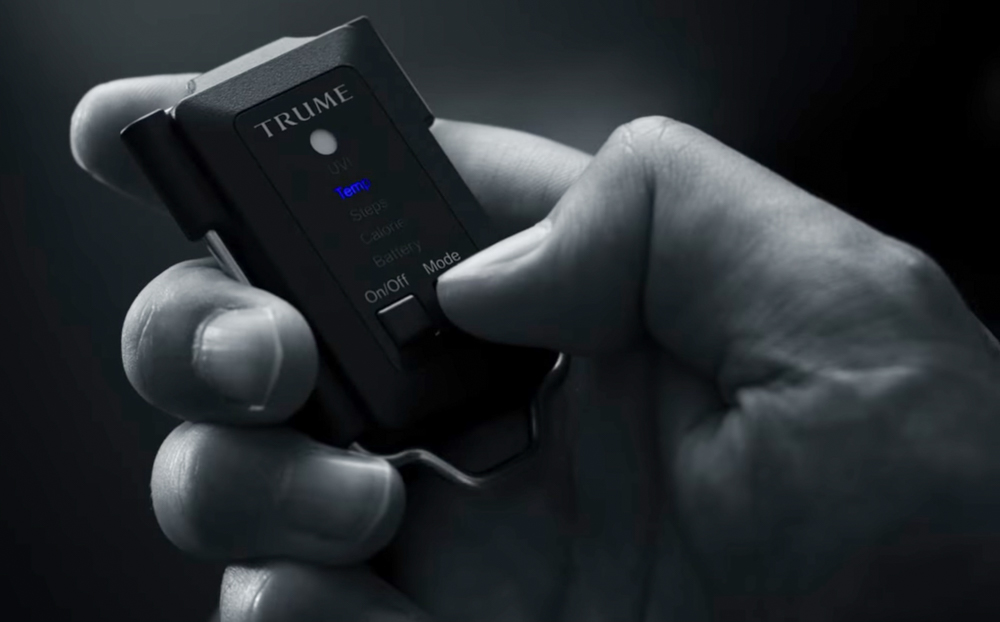 I personally like the idea of having a remote sensor – I could see myself leaving it in places to determine the temperature there and perhaps check UV in the summer… And I can also see myself totally not using it after a while and just leaving it at home, unused.

As far as I can tell, this is a new thing; though it is entirely possible I am unaware of some quirky quartz and/or smartwatch that has a remote accessory like this. Linde Werdelin with their dive computer also spring to mind as a watch that could come with a specially designed external accessory. 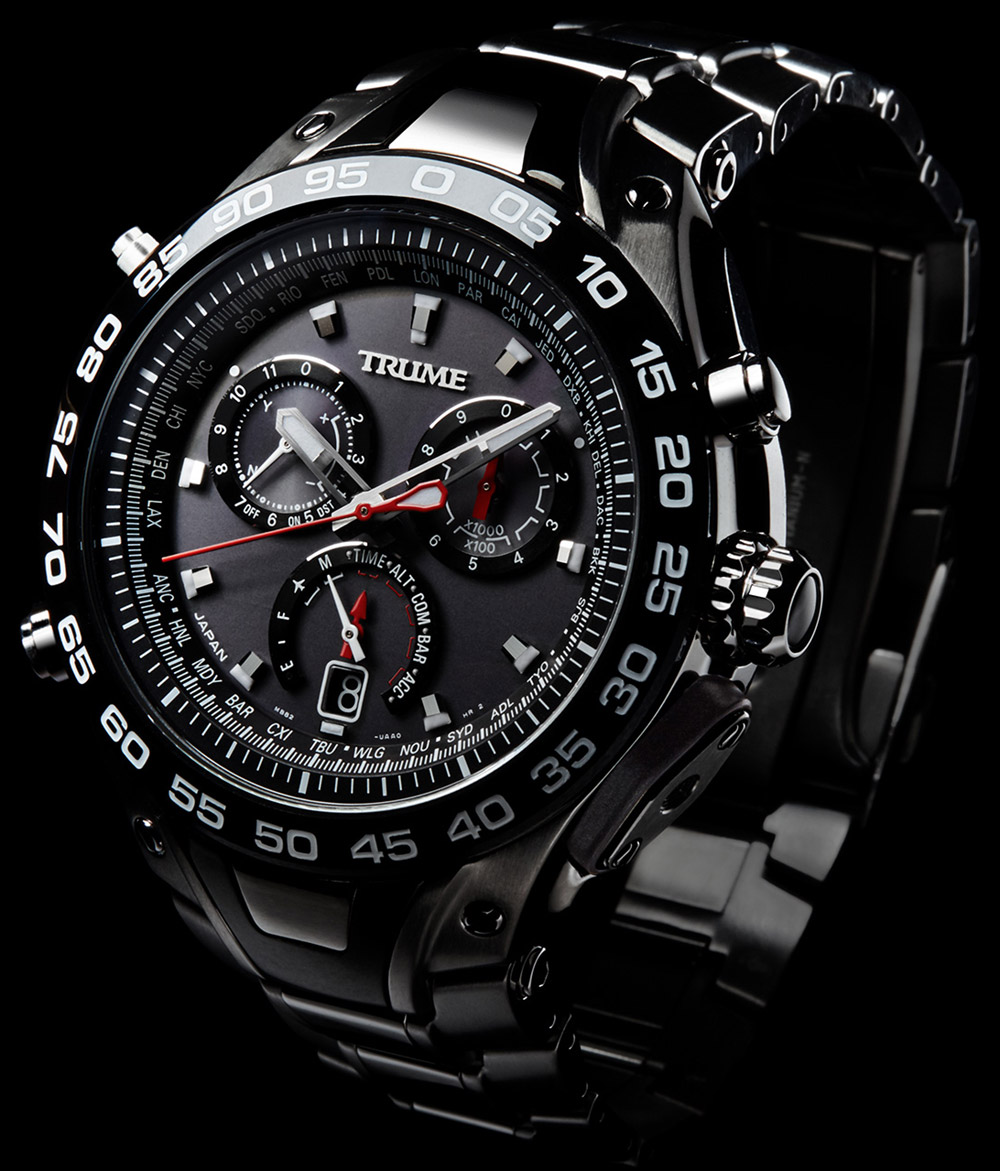 The Epson Trume measures a whopping 60.2mm tall by 48.6mm wide (kudos to Epson for providing lug-to-lug measurement) and is a manageable 15.5mm thick – massive crown and buttons are excluded from those already generous measurements. The case is “Pure titanium” that comes with a hard protective coating, while the bezel is ceramic. I couldn’t find much information on what the gold colored stuff is in the two-tone model but given that there is no price premium there, I’m sure it is some sort of a coating. 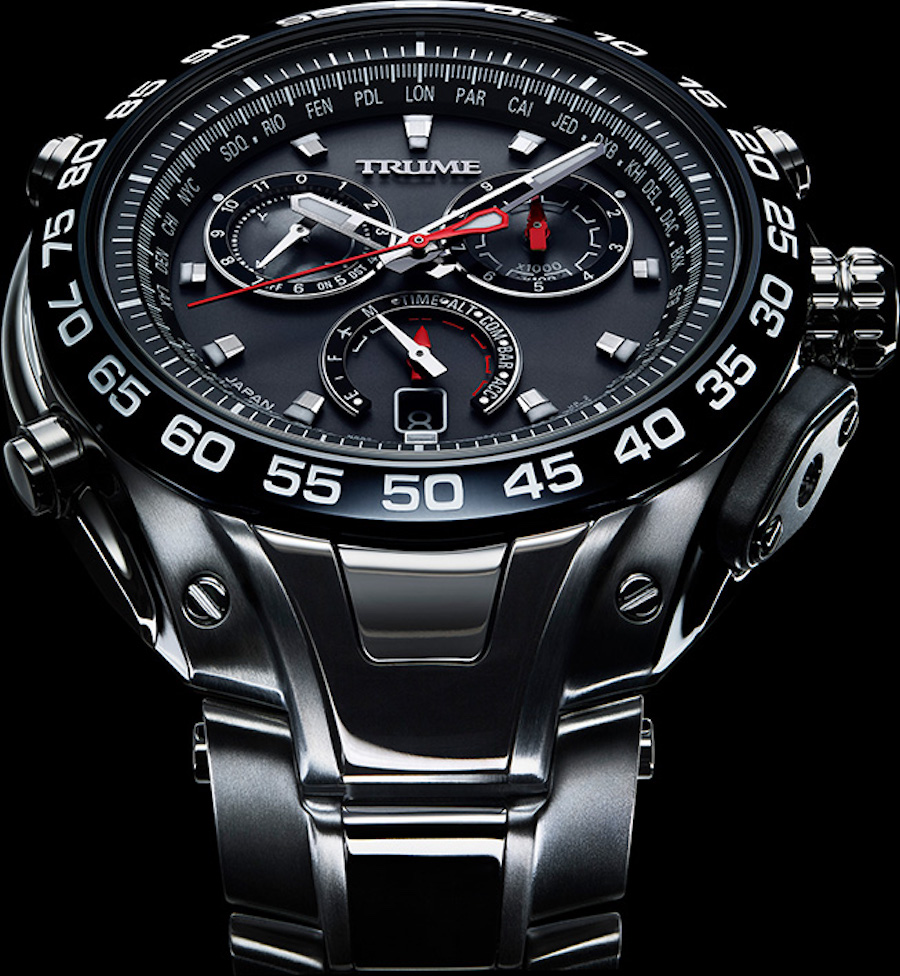 Epson say the design of the case at the 6 and 12 o’clock position was inspired by Japanese armor ornaments. Though its shape, I presume, is largely responsible for the 60mm lug-to-lug measurement – which more than likely renders the Epson Trume totally unwearable for those with narrow wrists – I still really like how it is done. It’s a very organic, high-tech design that is unapologetically over the top. 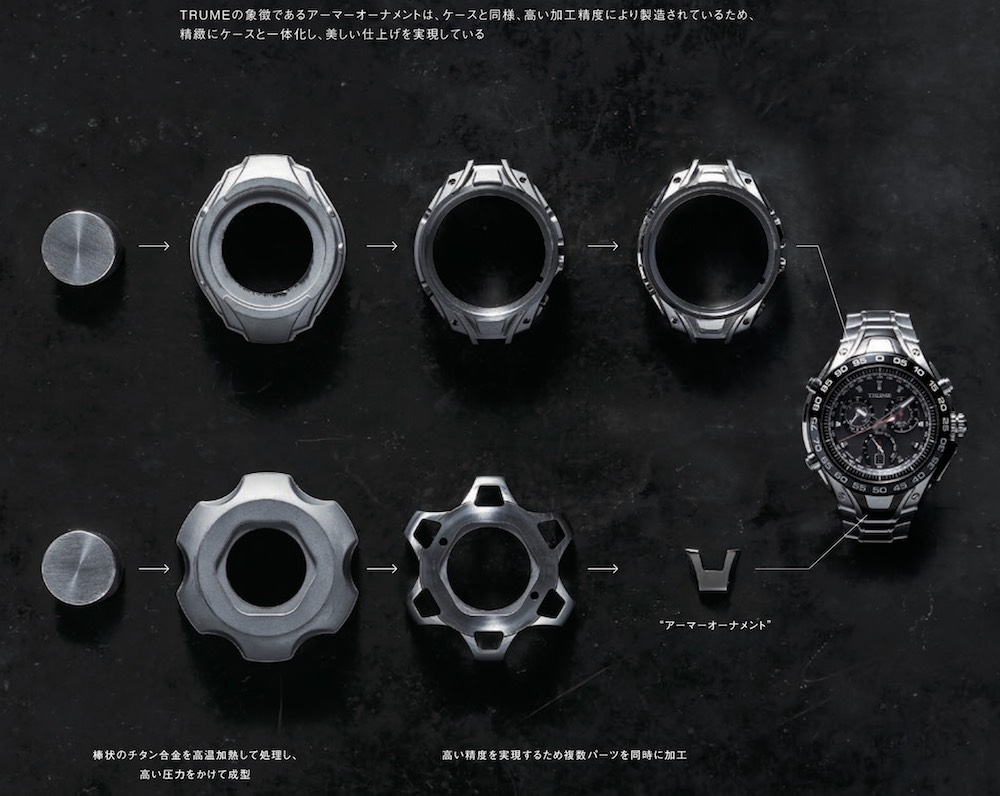 The case is water-resistant “for everyday life” at a rating of 10ATM (100m equivalent) and the front is sapphire crystal with double-sided anti-reflective coating, as I think it should be. The watch, despite the massive size, weighs less than a regular steel watch on a bracelet: on the titanium bracelet the Epson Trume will weigh about 135 grams, 110 on a strap – good indicator of how light the bracelet actually is, being barely heavier than a leather strap. Tested operating temperature is between -10 and +60 °C. 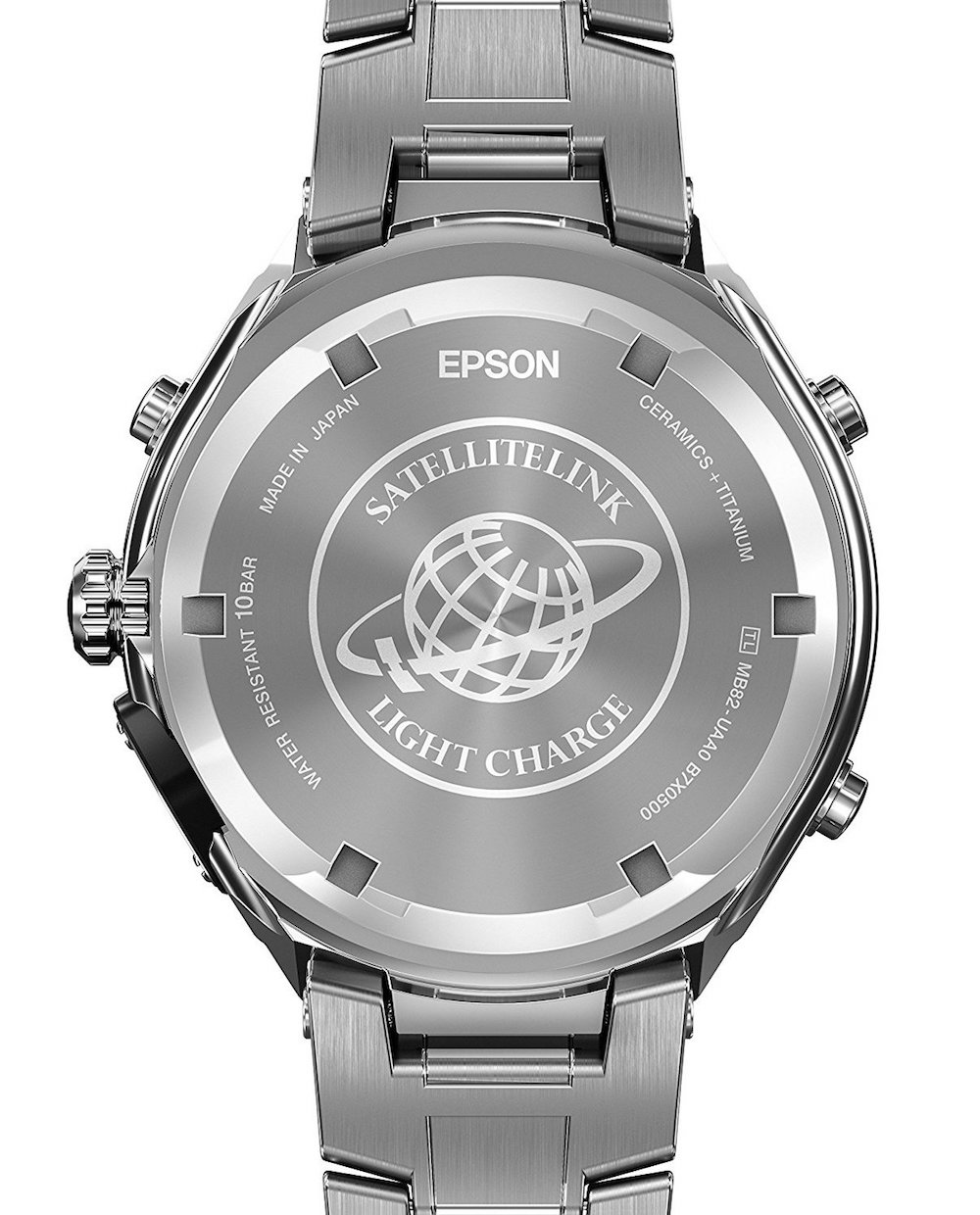 Other cool features beyond those discussed above include a built-in, waterproof barometric pressure and altitude sensor, both of which allow for an 11-piece log to be registered, meaning you can keep track of your elevation changes and pressure changes through 11 logs – all re-writable, of course. Time is synchronized via GPS so the watch is atomic clock accurate; without synchronization, the movement is rated to be accurate within +/- 15 seconds per month. There also is a 3-axis magnetic sensor (compass). 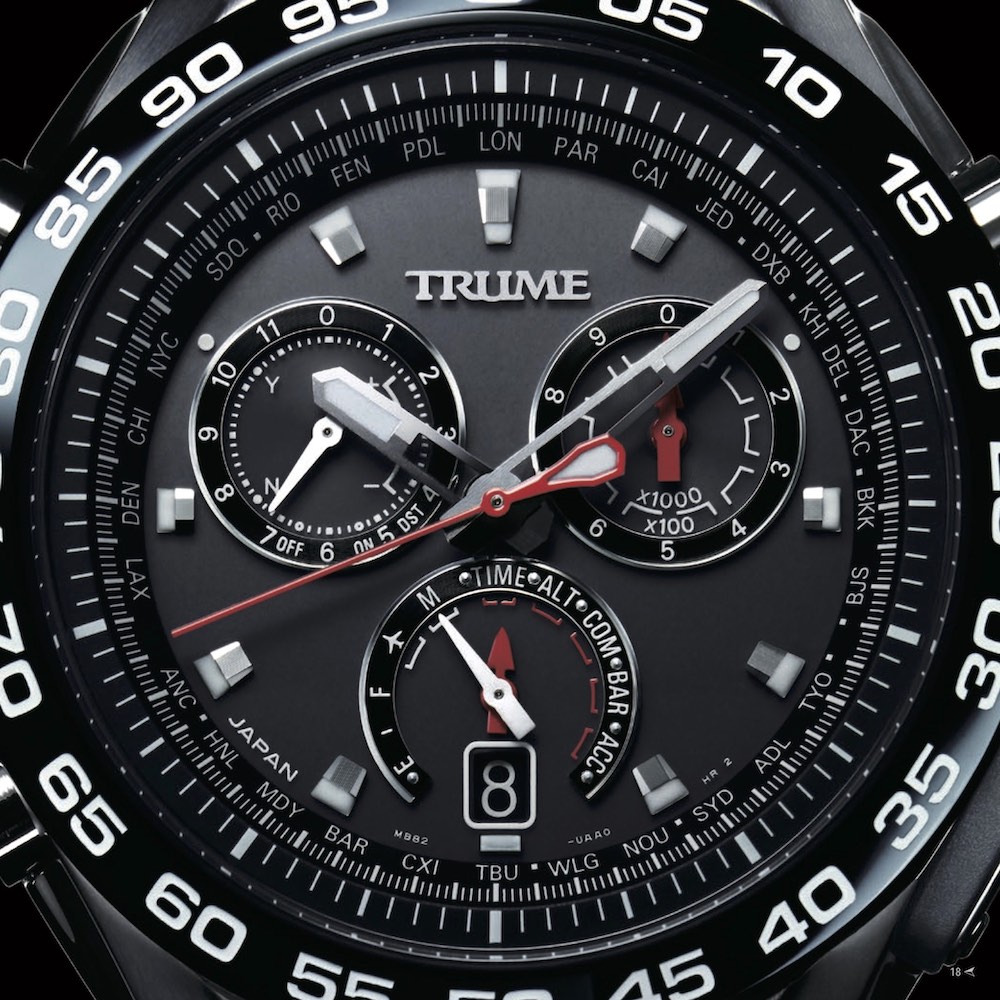 One interesting thing is how close the dial layout is to the Seiko Astron GPS, a watch, as we said above, Epson played a major role in developing. I couldn’t possibly fact check this, given the absolutely, totally, and entirely non-existent international PR of both Seiko and Epson, but I’ll mention this anyway. As I was researching this watch (about which the only official written documentation in English is its owner’s manual), I read somewhere that Epson developed the Trume on its own, without telling Seiko about it. This is a rumor at best, but given the world-renowned, highly competitive Japanese corporate environment, I don’t find that rumor too much of a stretch to not mention it here. 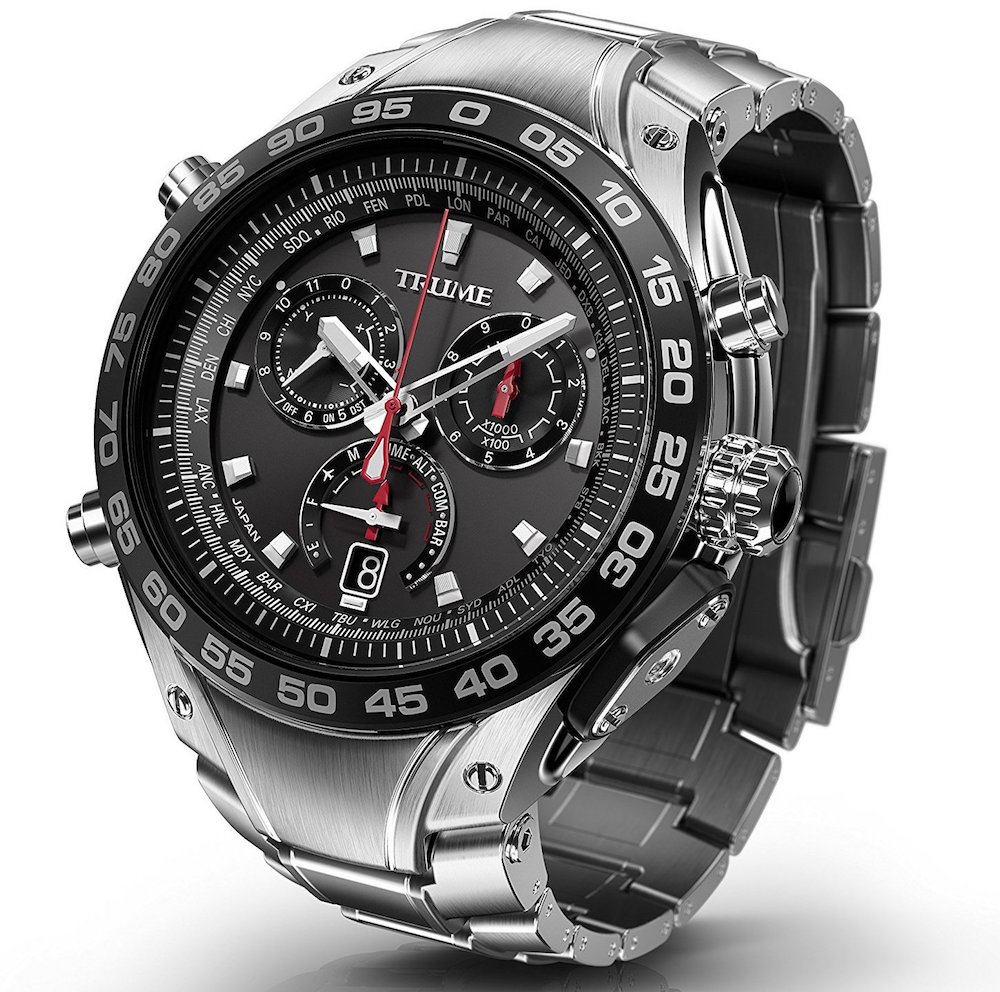 Further enforcing this idea is how Epson communicates about Trume everywhere (in its site and micro-sites, long-winded Trume-specific catalogs, etc.): Epson considers the Trume to be their very own achievement in which they give absolutely no credit to anyone but themselves, referring to the Trume brand as the hallmark of their proprietary know-how and achievements. 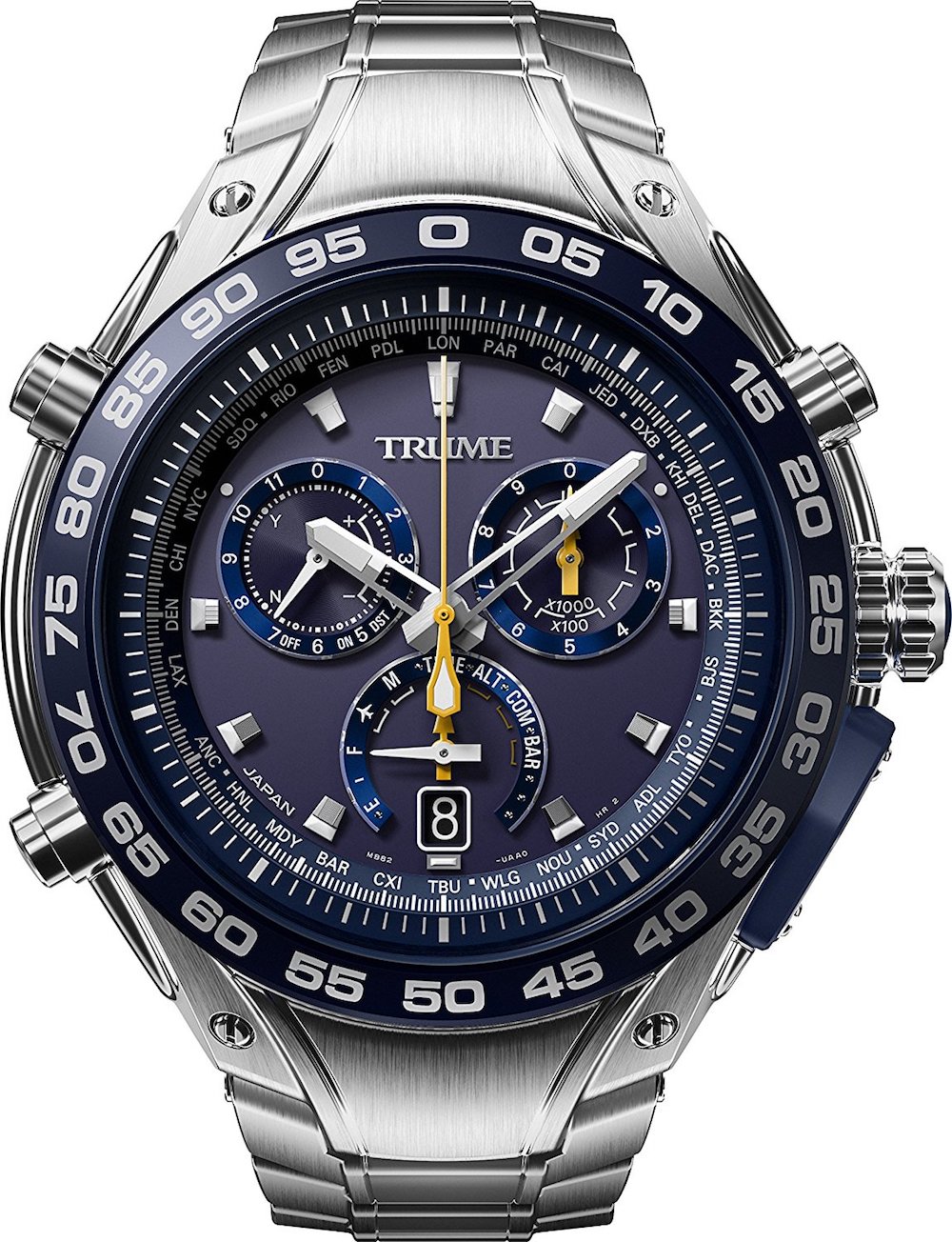 I rarely write a summary for a news article, but we’ve talked so much about details, I thought this merits an exception. The Epson Trume is a weird watch from a company in a weird position. Seiko created Epson: Epson is named for being, and this is no joke, Son of EP (Electronic Printer), as Epson was set up to develop a marketable electronic printer based on the world-first printer that Suwa Seikosha developed to go with its timing devices during the 1964 Tokyo Olympics. However, over time, Epson turned into Seiko Group’s incredibly powerful R&D and manufacturing company that is as versatile as the Seiko branch of the group. 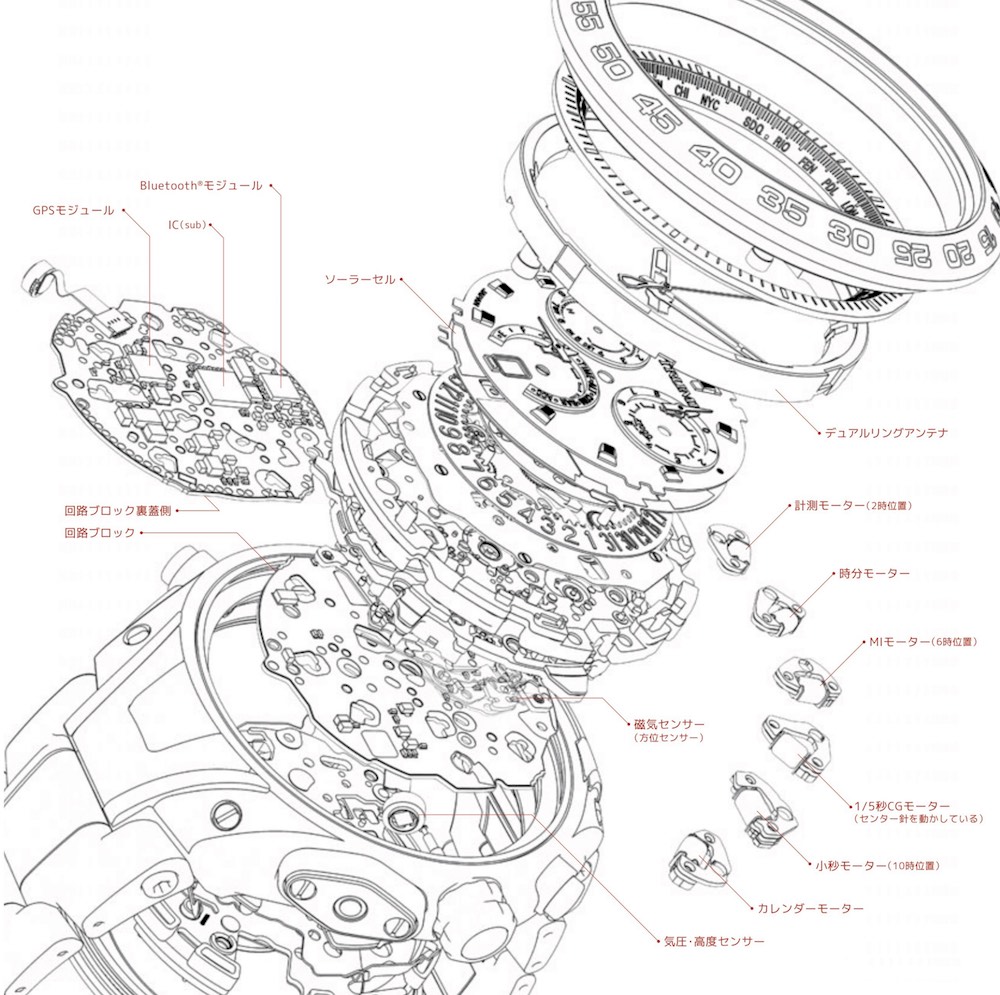 I found it very interesting to read Epson say so many times how they have helped or, rather, enabled Seiko to create the 1969 Astron and the 2012 Astron GPS and I do find the Trume as a borderline competitive offering that totally could have been an upscale Seiko Astron GPS to further empower that painstakingly and expensively developed high-end Seiko collection.

From a strictly technological point of view, the Epson Trume impresses with its tech-packed inside and apparently beautifully crafted exterior, with the Waypoint, the 11 logs, and of course, the idea of the Expanded Sensor being the truly outstanding ones. As a whole, the Trume is a watch – or, shall I say, brand – we may or may not remember 5 or 10 years from now, as it totally might have been just a muscle-flexing, JDM-only (Japanese Domestic Market) exercise by Epson to prove a point we, outside of Japan and the Seiko Group, will likely never be given a chance to fully understand. Or, who knows, Trume may stay around and cause some headaches over at the Seiko Astron GPS department… 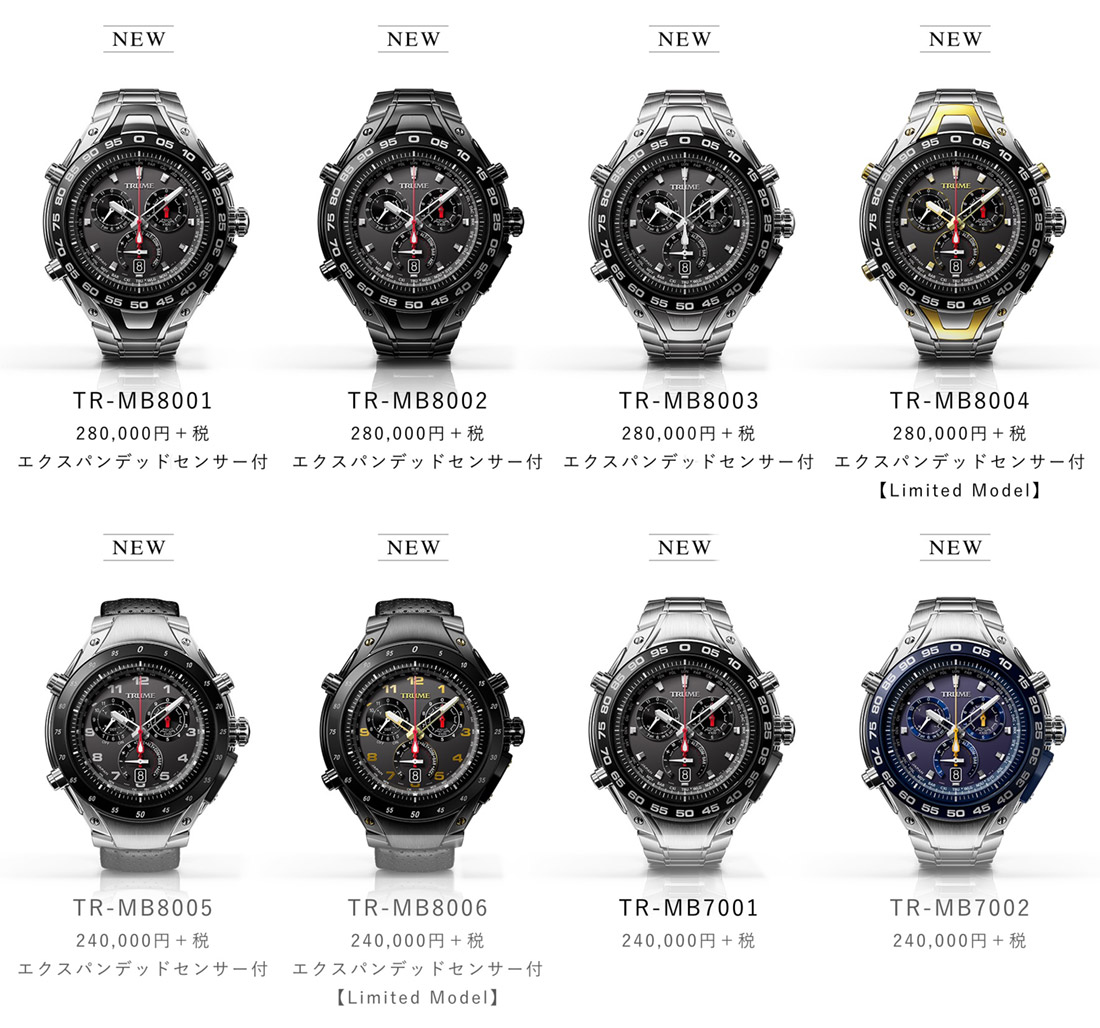