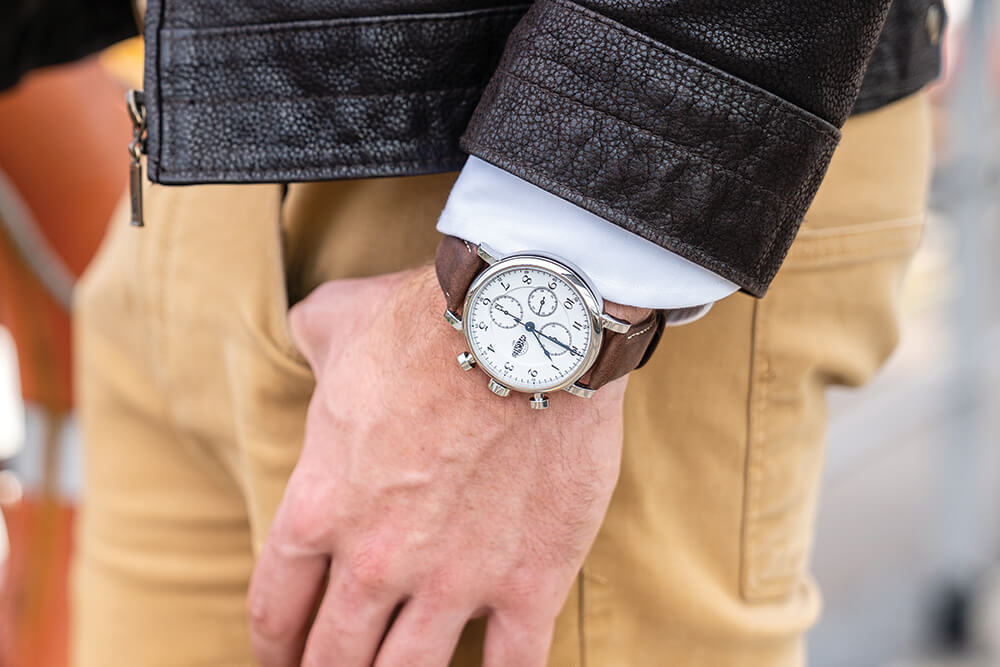 Eugen Wegner Revives A Century-Old Tradition With The Hevelius, One, & Phoenix 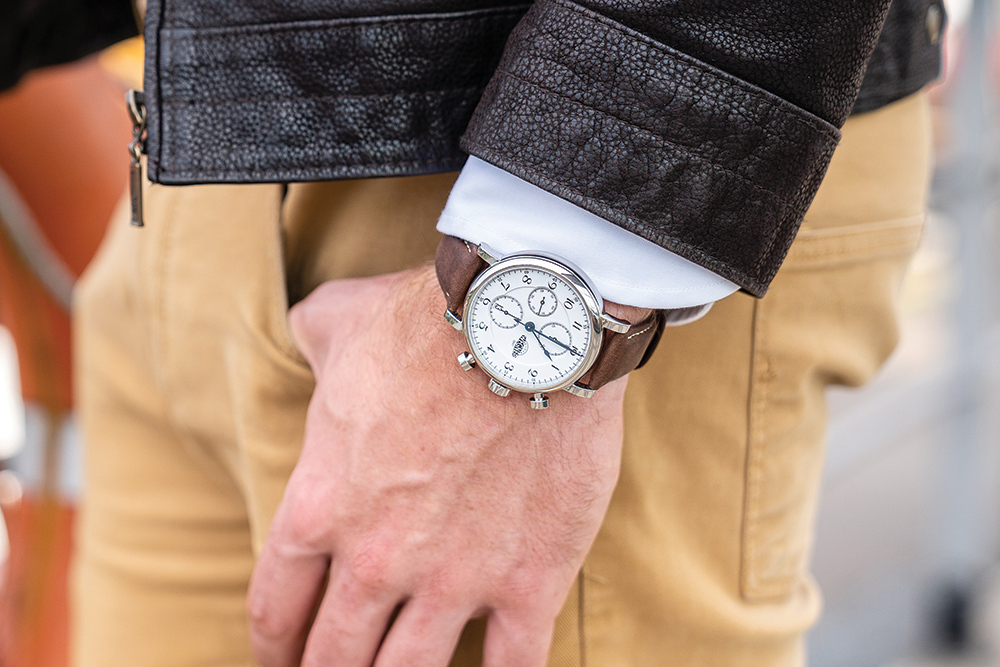 The Eugen Wegner One.

Eugen Wegner, a German brand founded in 1897, is being faithfully revived by the founder’s great-great-grandson, Jonas Bley. The new watches — including the Hevelius, the One, and the Phoenix — are inspired by the company’s original pocket watches and marine chronometers. They are assembled and finished in the brand’s Hamburg, Germany, workshop, using Swiss mechanical movements. All three models are available on Kickstarter. 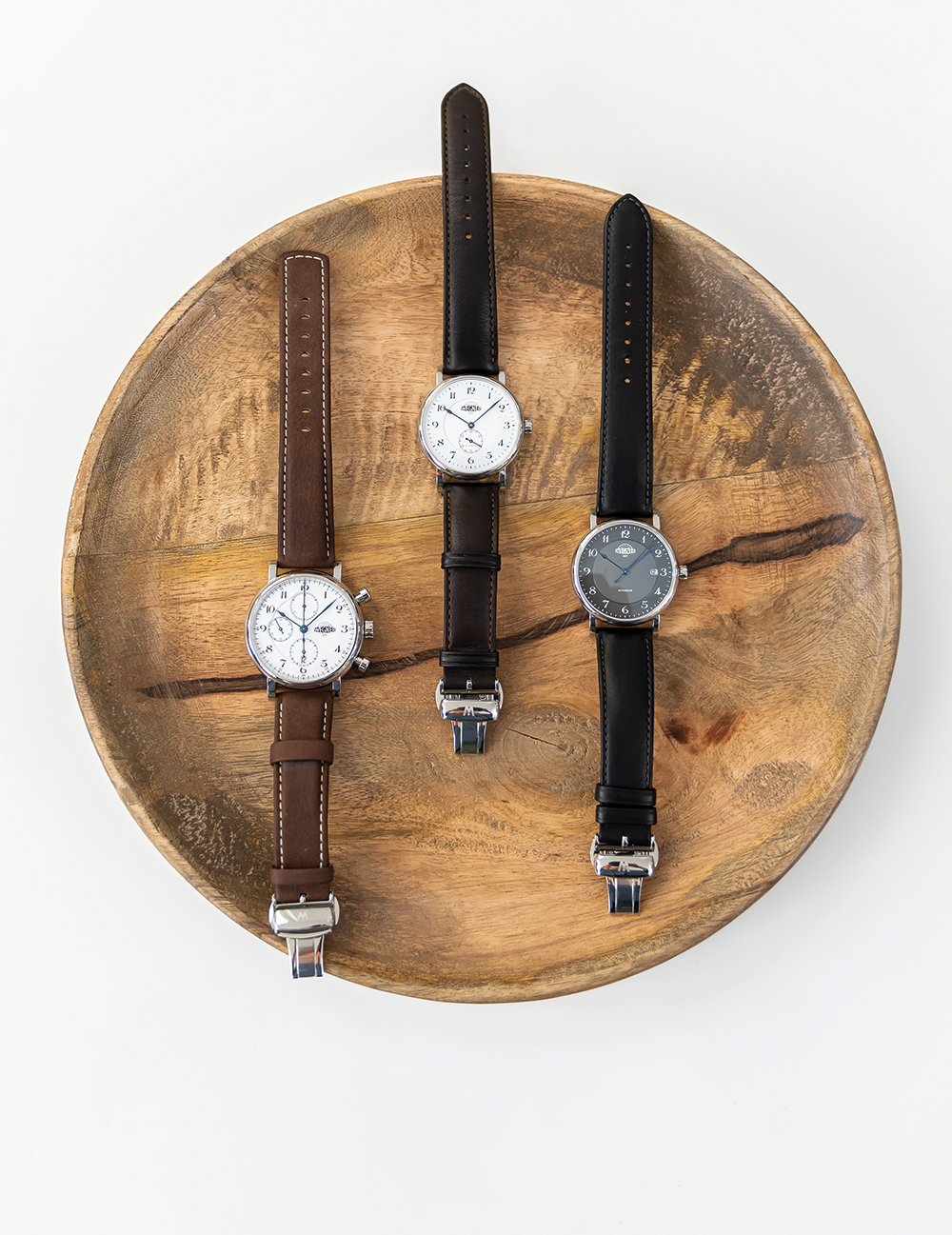 The Eugen Wegner chronograph One, Hevelius and Phoenix.

Eugen Wegner was one of the leading watchmakers of his time in what was then known as Western Prussia, with workshops first in Gdańsk, Poland, and later in Hamburg, Duisburg, and Lubeck, West Germany. One of his most successful models was a pocket watch inspired by and named after astronomer Johannes Hevelius, who was also mayor of Gdańsk. Wegner’s son, Hans-Ulrich, joined the business in the 1920s, introducing the production and servicing of marine chronometers, and the company flourished for several decades. Like many mechanical watchmakers of the era, however, Eugen Wegner succumbed to the quartz revolution of the 1960s. 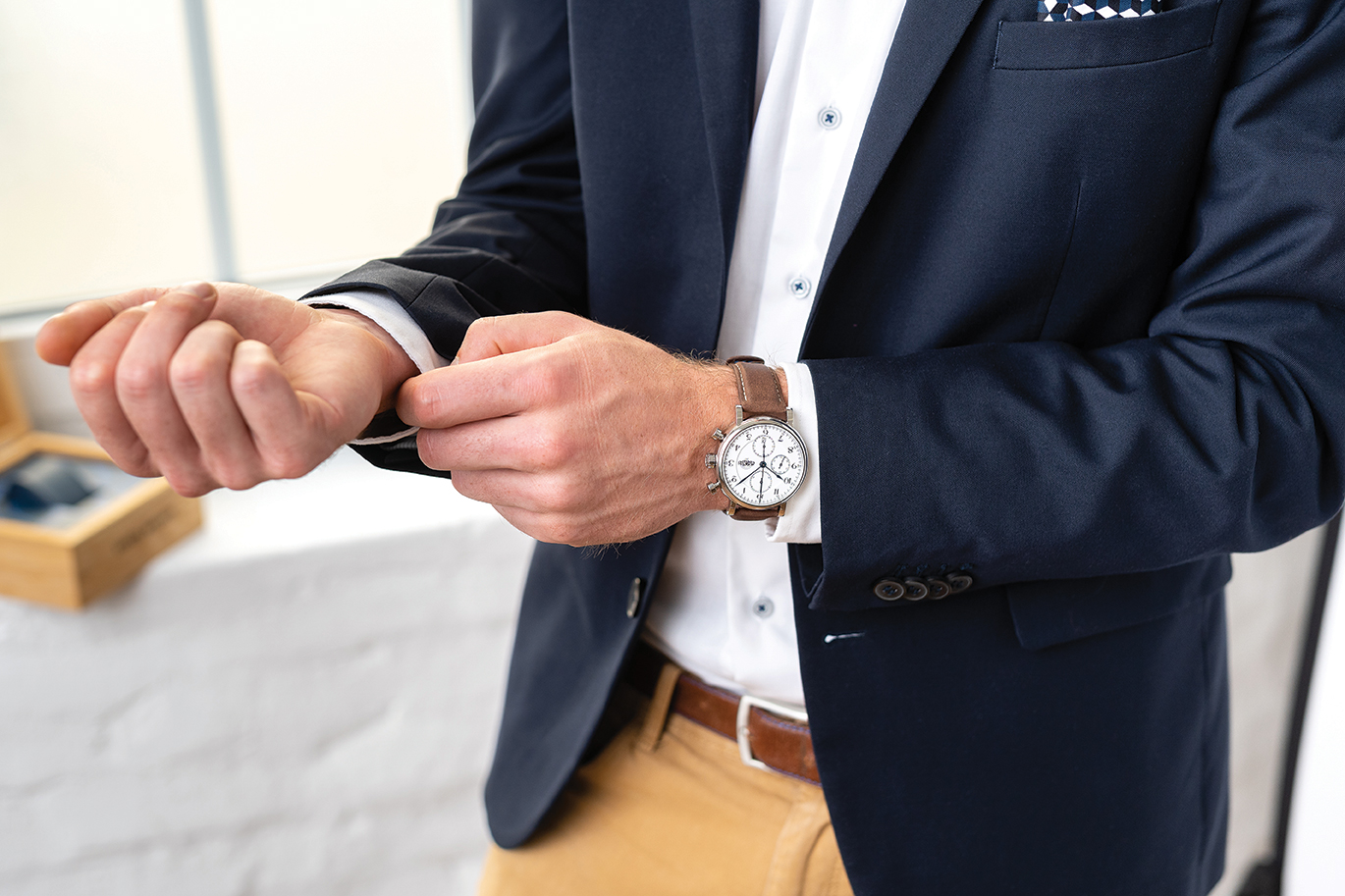 The Eugen Wegner chronograph One.

It remained dormant until 2017 when Bley decided to assemble a team of entrepreneurs, designers, and watchmakers to revive the brand. Jonas, who worked as an international tax lawyer for 10 years in Germany, Malaysia, and Singapore, says he was always interested in the watches that were an important part of his heritage but lacked the skills to start them up again. “While the story of Eugen Wegner and the watch business has always been present in my childhood home, none of us really dared to venture into that field, because we didn’t have the experience,” he says. “My grandmother, who used to work for the company in Duisburg at the beginning of her career, was a goldsmith, and during high school, I interned at her studio for a short while, but that was a long time ago.” 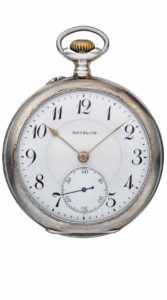 An original pocket watch made by founder Eugen Wegner.

His passion for watches was rekindled in 2017 when he came across one of the original Eugen Wegner Hevelius pockets watches that had been sold by a trader in Moscow. “It was the tipping point for me to finally try to restart the business,” says Jonas. “I decided from the beginning that I did not want to outsource the manufacturing. The watches are close to my heart and I wanted to have as much control over the process and quality as possible. I set out to find skilled and motivated watchmakers and goldsmiths to be part of a revival team from day one.” Jonas set up a workshop in Hamburg, and today, he works with Daniel, Fabian, and Ruben, three talented watchmakers, along with COO Hendirk Homann, a seasoned entrepreneur; Bastian Springer, who formerly worked in finance for Volkswagen and now handles digital strategy and marketing for Eugen Wegner; and Jonas’s sister, Jantje von Reeken, who is in charge of communications. 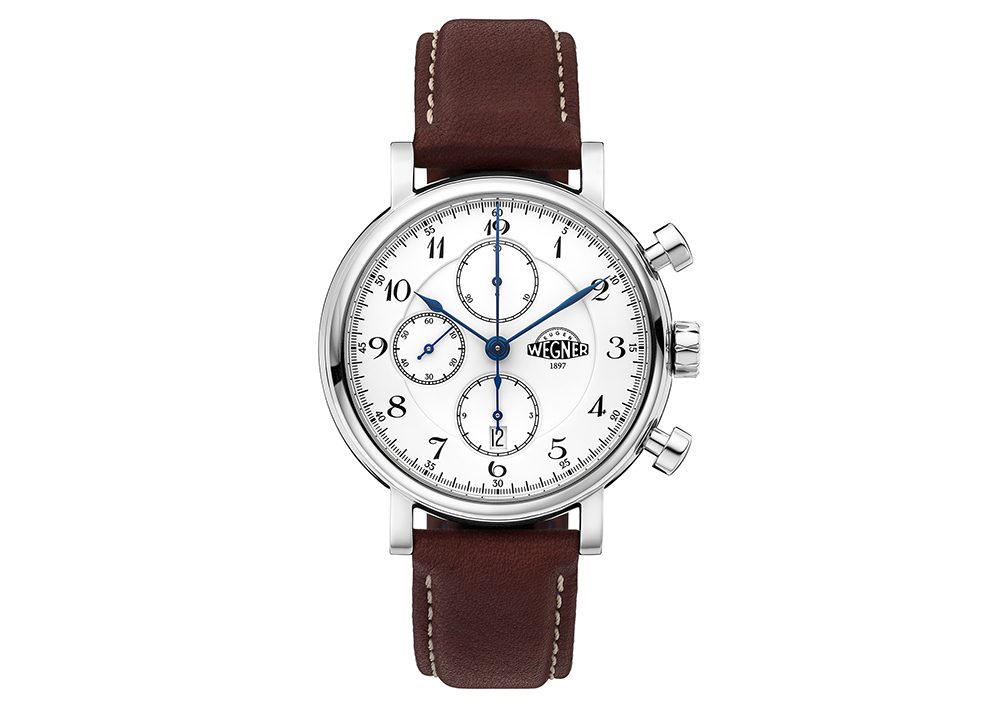 The Eugen Wegner chronograph One.

After more than two years of research and development, the  first new Eugen Wegner watches were introduced. The first model, the Hevelius, was inspired by the traditional design of the popular early pocket watches created by the founder. Following that came a chronograph version of the Hevelius called One, and then the more contemporary Phoenix. All three bear design elements that are very close to Wegner’s original designs, including font, case shape, and hands in the traditional pocket-watch style. “We have added some details to give them more of our personalities and transform the old design into a modern but classy one,” says Jonas. 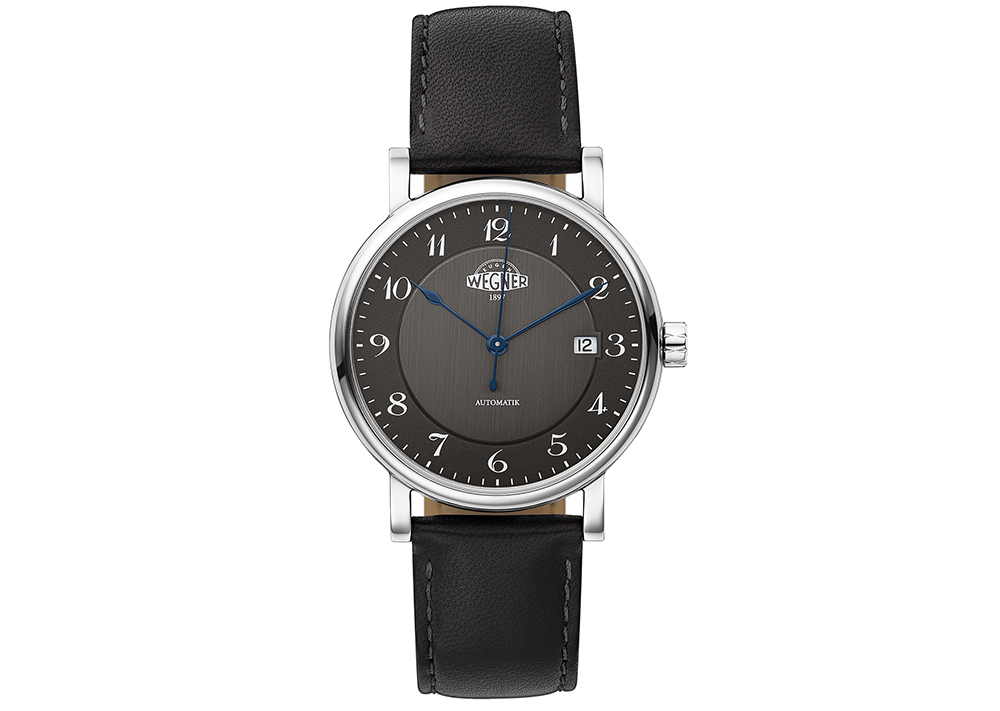 “We aim to combine heritage, adventure, and curiosity,” says Jonas. “We source our components from a select group of suppliers in Germany and Switzerland. The complete process of refinement of the movements, final assembly of every single watch, and quality control is done in-house in our Hamburg workshop,” he adds. 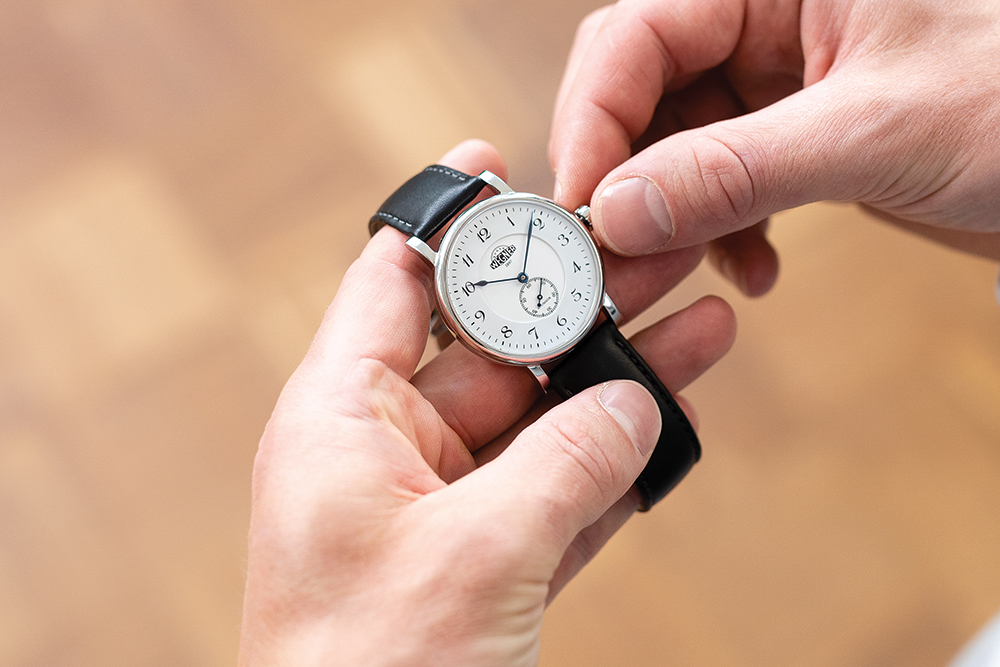 The 39mm Hevelius is a classic three-hand with small seconds at 6 o’clock in a 316L stainless steel case. It contains the ETA caliber 2895, accurate to +/- 7 seconds per day, which can be viewed through the sapphire crystal caseback. The 43mm chronograph, called One, also based on the original classic design, contains ETA’s Valjoux 7750 movement, finished at Eugen Wegner’s Hamburg workshop. The 39mm Phoenix is a modern interpretation of the classic design. The two-stage anthracite dial has an inverted gradation to emphasize the transition to modernity. The center section has been sandblasted to make it stand out visually. The simple date gives the watch a natural and clear look. The movement is ETA’s caliber 2892, with a 42-hour power reserve. 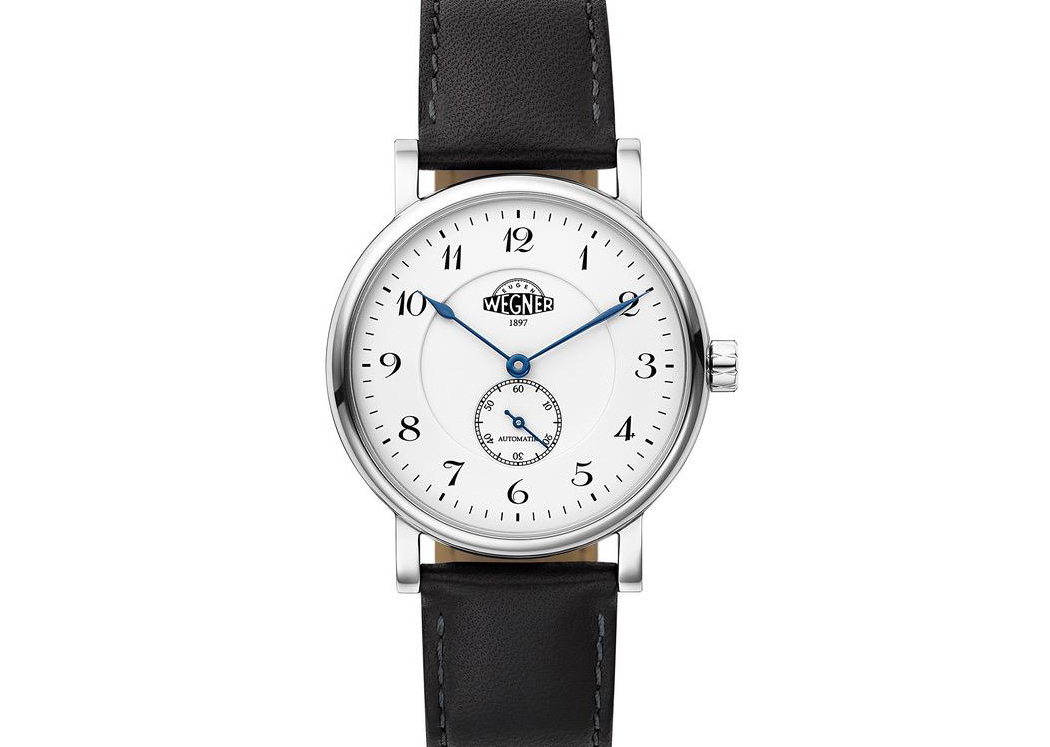 The movements are refined and finished in Hamburg, including Geneva stripes, engravings, as well as the polishing and bluing of the screws. The rotors are given a proprietary “sun cut” finish, while the backplate is decorated in perlage. Hands are thermal-blued steel. Every screw is pre-polished on a lapidating machine with diamond-studded polishing paper. To remove even the finest scratches, they are polished again by hand. Finally, the screws are thoroughly cleaned and thermally blued at approximately 300°C. The blue color not only looks beautiful, but it also serves as protection against corrosion. 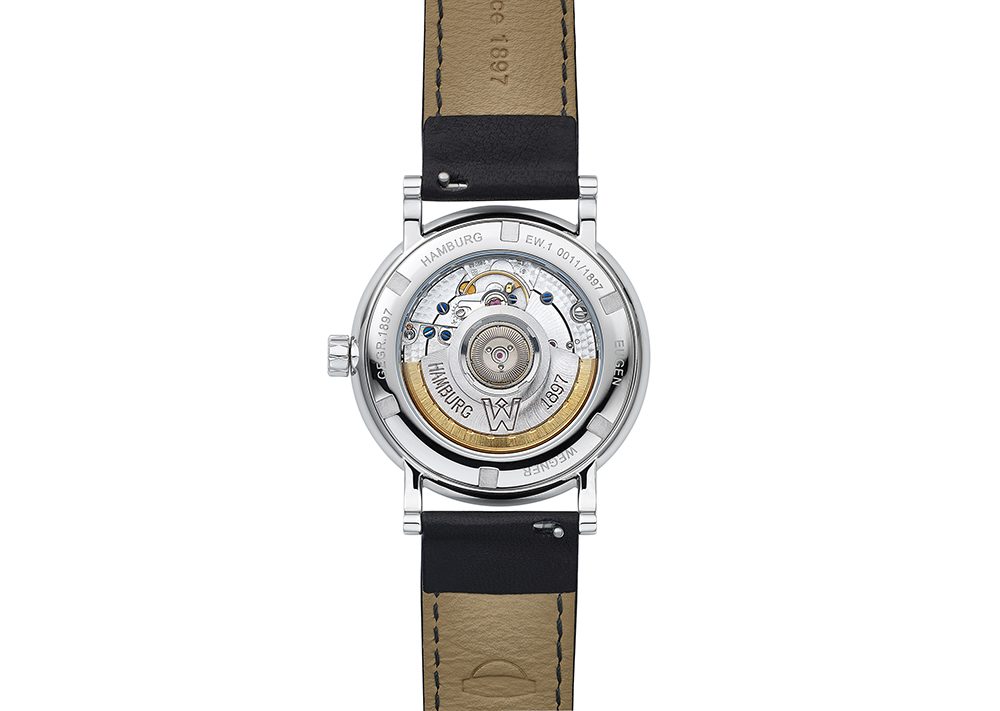 The caseback of the Eugen Wegner Hevelius. All movements are finished in-house.

Armed with experience and expertise, the team behind Eugen Wegner is rebuilding the brand from the bottom up. “Each member’s relationship with watchmaking runs deep,” says Jonas. “To them, it’s not just a profession, but a craft. Coming from different industries, the revival team is dedicated to bringing back the name and legacy of Eugen Wegner watchmaking. Using their passion as fuel, they are visionaries who are paving the way for Eugen Wegner’s renewed success.” Depending on the delivery date, the watches start from $1,532 USD for the Hevelius, $1,689 for the One, and $1,435 for the Phoenix. They are available via the brand’s Kickstarter campaign here.