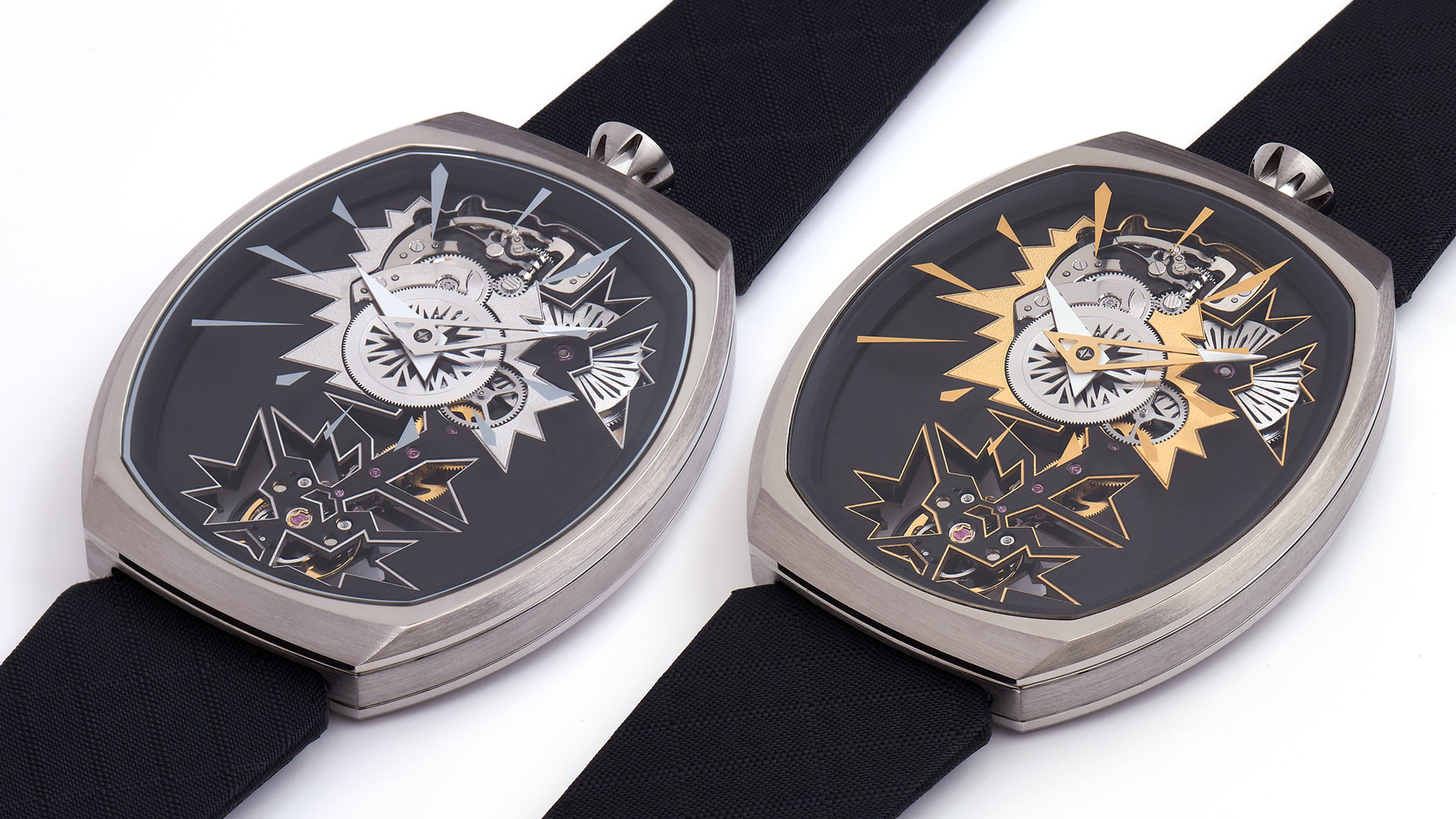 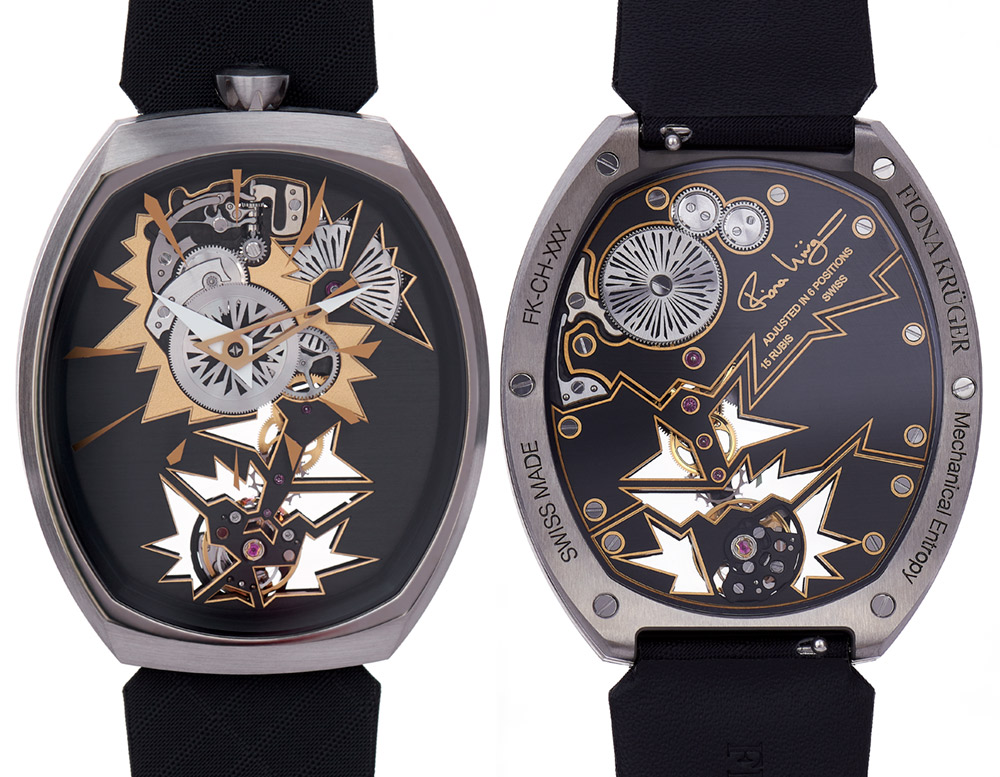 After years of producing exclusively skull-shaped timepieces, Fiona Krüger has released her second collection, and there are no skulls involved. The Fiona Krüger Chaos Mechanical Entropy looks like it could have been named ZAP! or KAPOW! with its attention-grabbing angular bursts comprising the shapes of various components and cutaways. The new collection represents a departure from the very specific image the designer has become known for, with a totally different look that even required development of a new movement to fit the desired “chaotic” theme.

Artist and designer Fiona Krüger is Scottish but has an international background and has spent much of her career in Switzerland. We wrote about her first watch in 2011 when it was only a prototype made as a school project, before actual production began in 2013, and when its future as an actual brand was still uncertain. Her Mexican Day of the Dead-styled Skull watch got attention from the watch industry and community (hands-on here) and has turned into a full-fledged brand. Krüger has also worked with other prominent independents in the watch industry such as Peter Speake-Marin, Fabergé, and L’Epée, while her own eponymous brand has continued producing a variety of designs based around the original Skull watch. 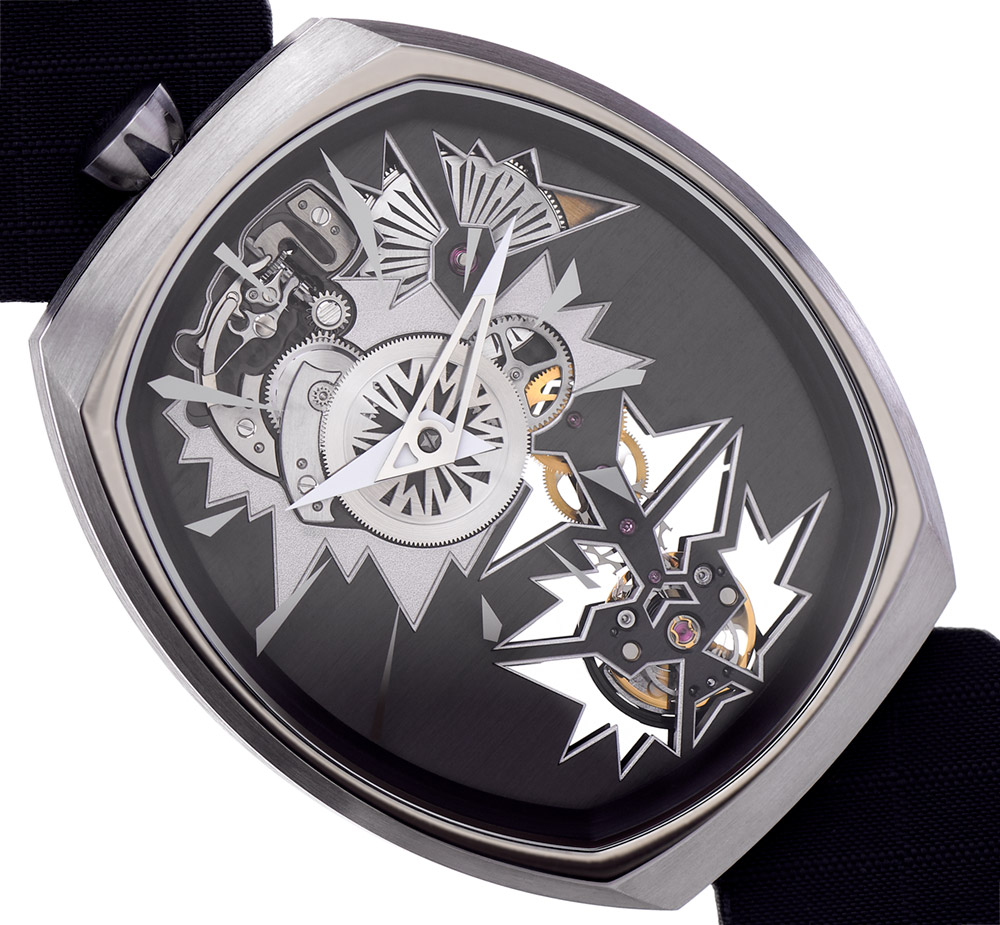 Now, the Fiona Krüger Chaos collection, with its first models called Mechanical Entropy, establishes the brand as more than just skulls and begins to round out the picture of her personality and approach to design. Like the Skull watch, the Fiona Krüger Chaos Mechanical Entropy is vibrantly artistic and with an edgy theme – but this time instead of death, it is destruction, explosions, and “chaos.” It’s hard to take abstract themes like these and make a successful, wearable watch (cars and airplanes, for instance, are apparently a lot easier), and the result is bound to lean towards the esoteric, but Fiona Krüger’s pieces are at the very least interesting and discussion-provoking. The brand’s materials talk a lot about the philosophical ideas of time, randomness, and disorder behind the concept, but it is cool that they also provide some of the notebook sketches that include the design process and artwork she is inspired by. 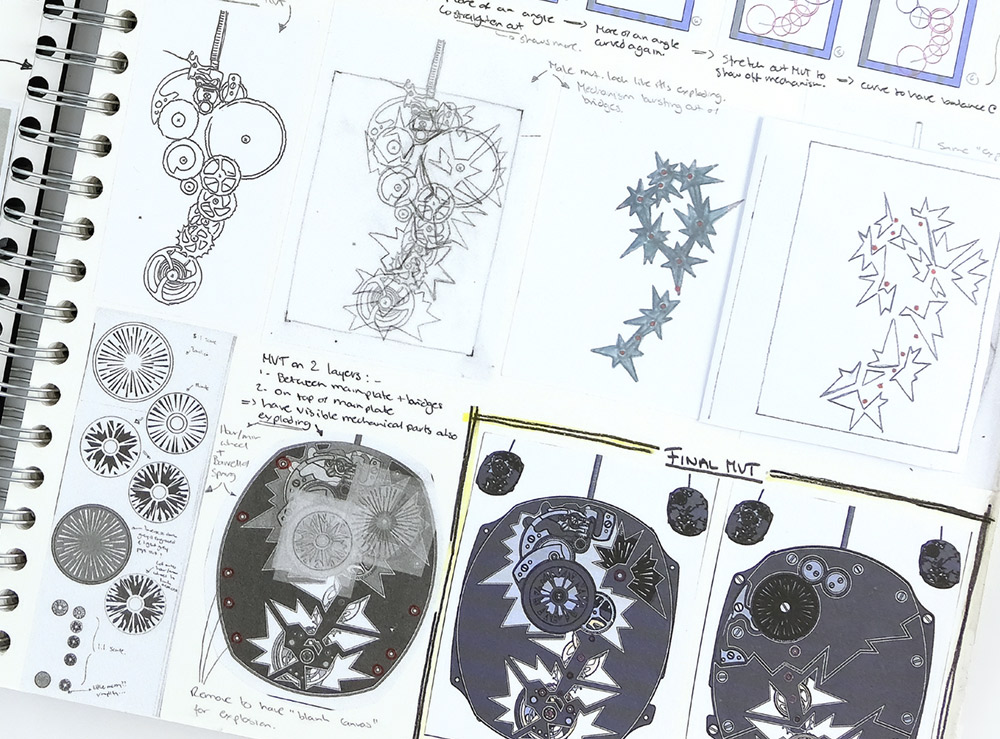 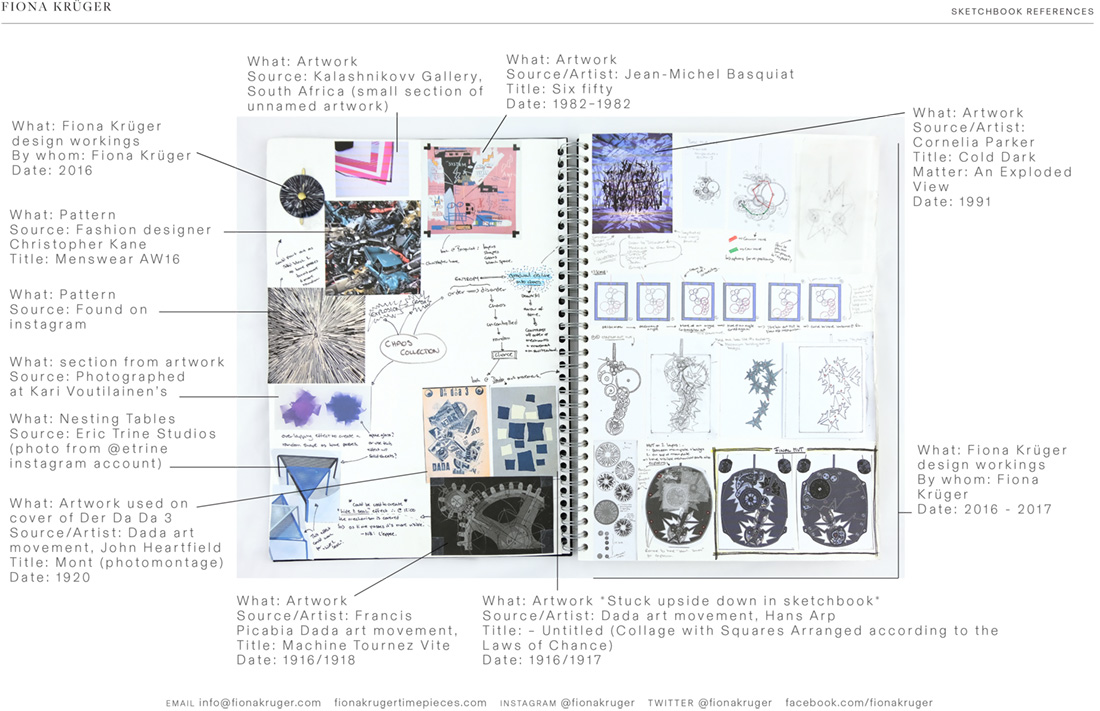 While there are plenty of watches with skulls in some form or another (see many, many examples here), Fiona Krüger’s original Skull watch actually has a skull-shaped case, and it is on the larger side (though she has also made a smaller model). The Fiona Krüger Chaos’ lugless case is far more traditional and appears quite wearable with an oval shape measuring 40mm wide, 48mm long, and just 7.5mm thick – and it should be nice and light in brushed and polished titanium. The crown is at 12 o’clock and its grooves echo the sharp angles found elsewhere. With all the action of the watch’s face, a more simple case was the right choice, in my opinion, to balance the overall design and quietly keep the focus where it belongs: on the dial and movement design. 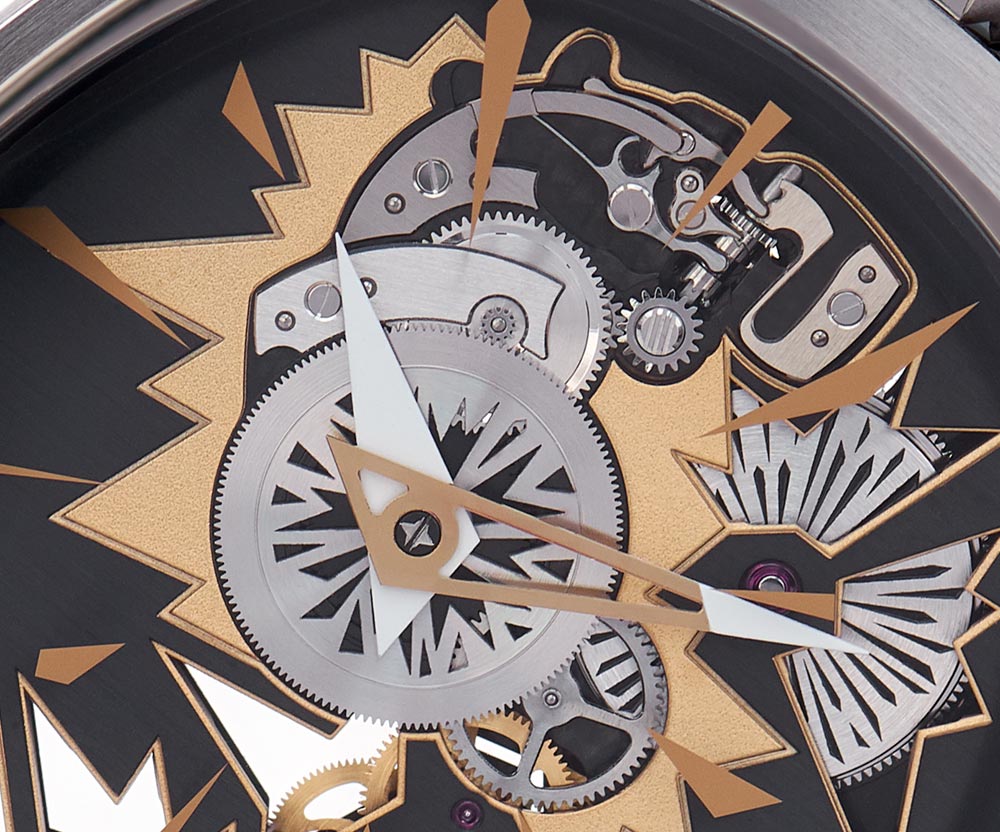 From the almost dauphine-style hands, to the shard-like indices printed on the underside of the sapphire crystal, to the comic-book-explosion-shaped cutaways, almost every element is jaggedly conspicuous. To me, it still looks intentional and carefully thought-out, but not at all expected. For all that appears to be going on, remember that this is still a two-handed, time-only watch. The two available versions differ in their rhodium or gold-plated highlights, but you can expect more versions to follow – personally, I would like to see better legibility. Even an artistic watch should always be a watch before it is art or anything else, in my opinion, meaning good legibility is a basic requirement. Blued hands might do the trick. 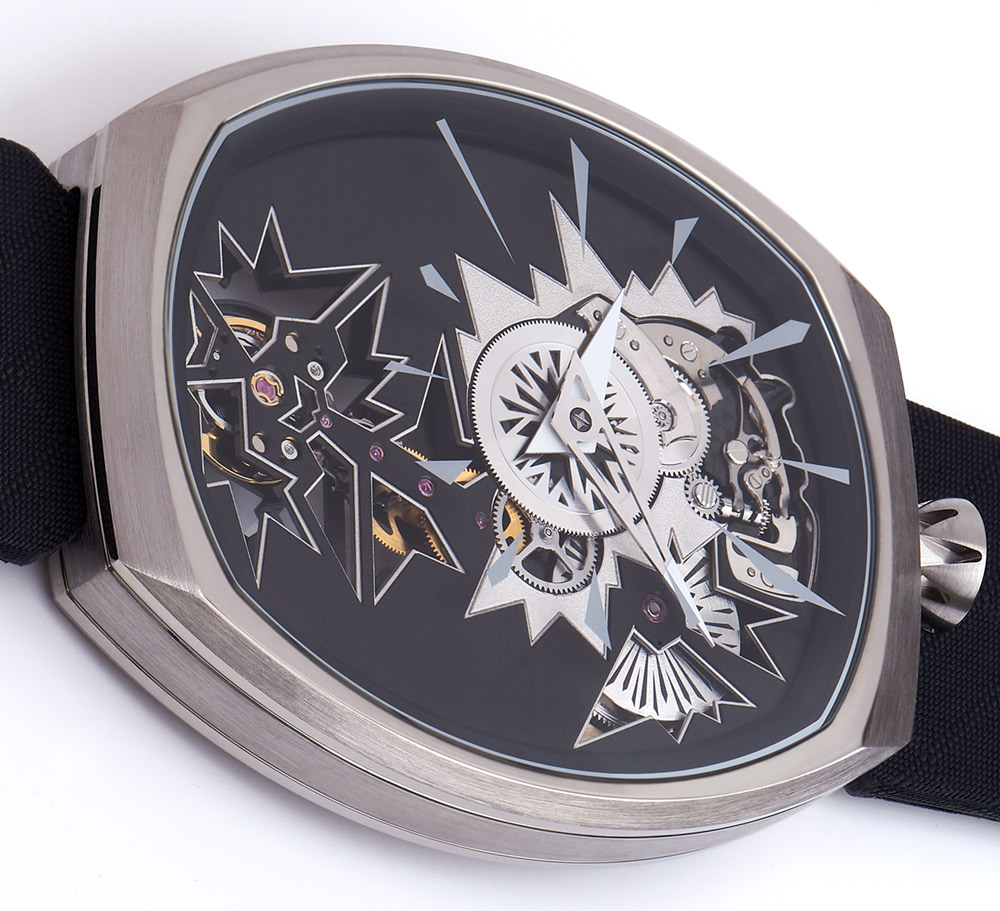 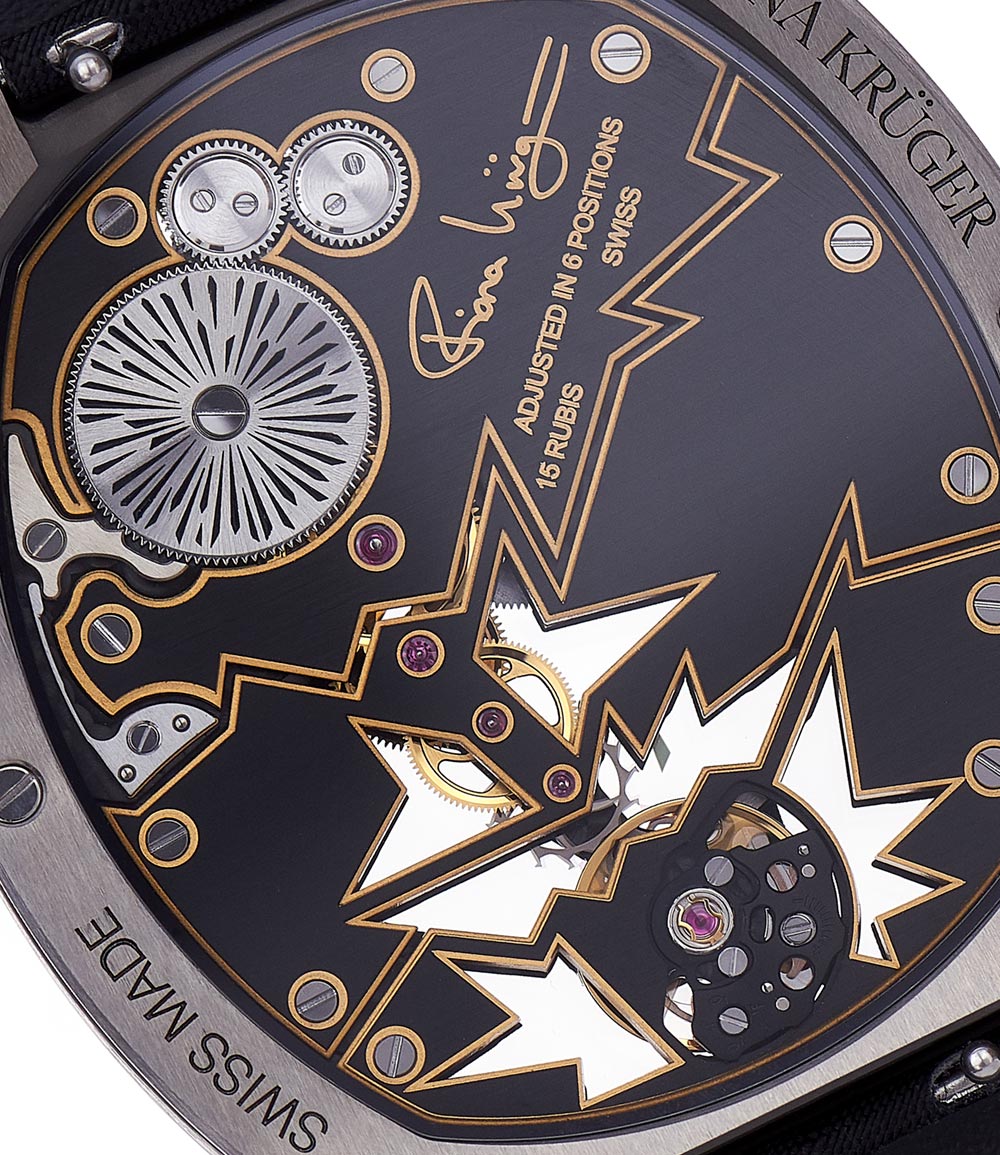 However, the Fiona Krüger Chaos Mechanical Entropy is first and foremost visual art, it seems, so aesthetics drive the design – including that of the movement itself. Usually, design has to follow the technical specifications of the movement rather than the other way around. Apparently, Krüger did not initially intend to create a new movement, but the desired visual effect required it. I have referred to the dial above, but what you are looking at from the front of the watch is in fact the movement plates which are brushed and finished with a black PVD coating – so it is more correct to refer to the watch’s “face” rather than “dial,” I suppose. Instead of a movement that is as compact as possible, the gear train has been stretched along the vertical length of the watch and is visible through laser-cut openings that also provide a view directly through the movement in places. 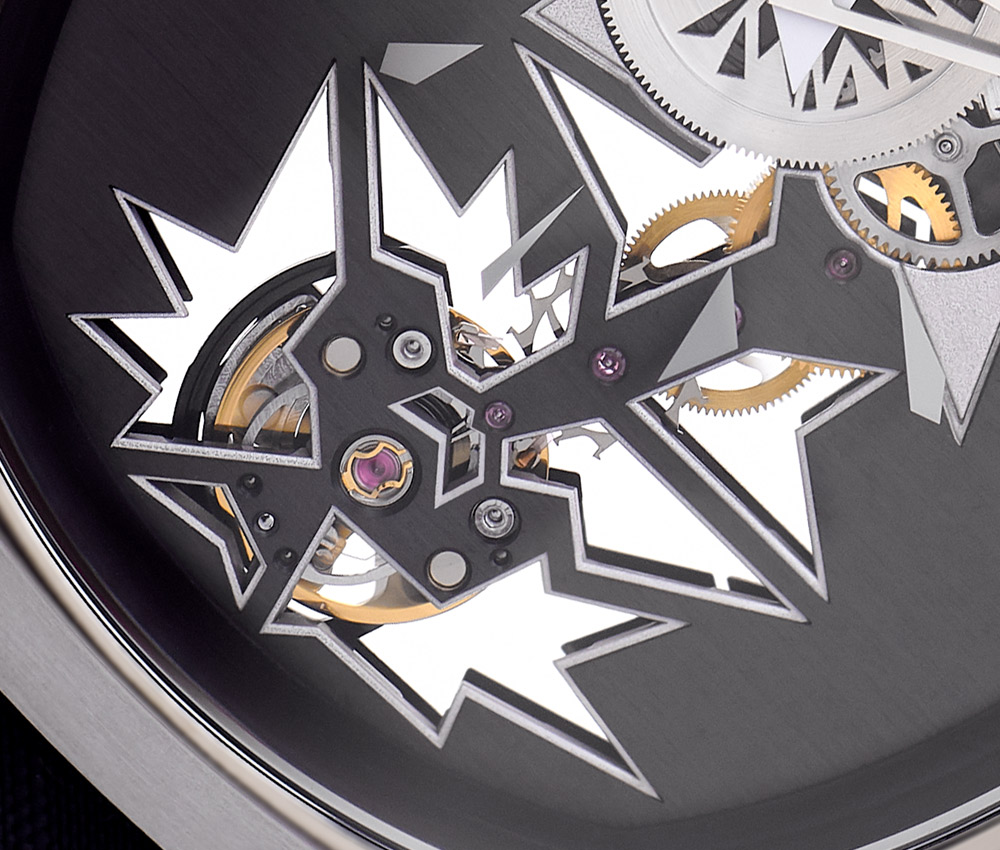 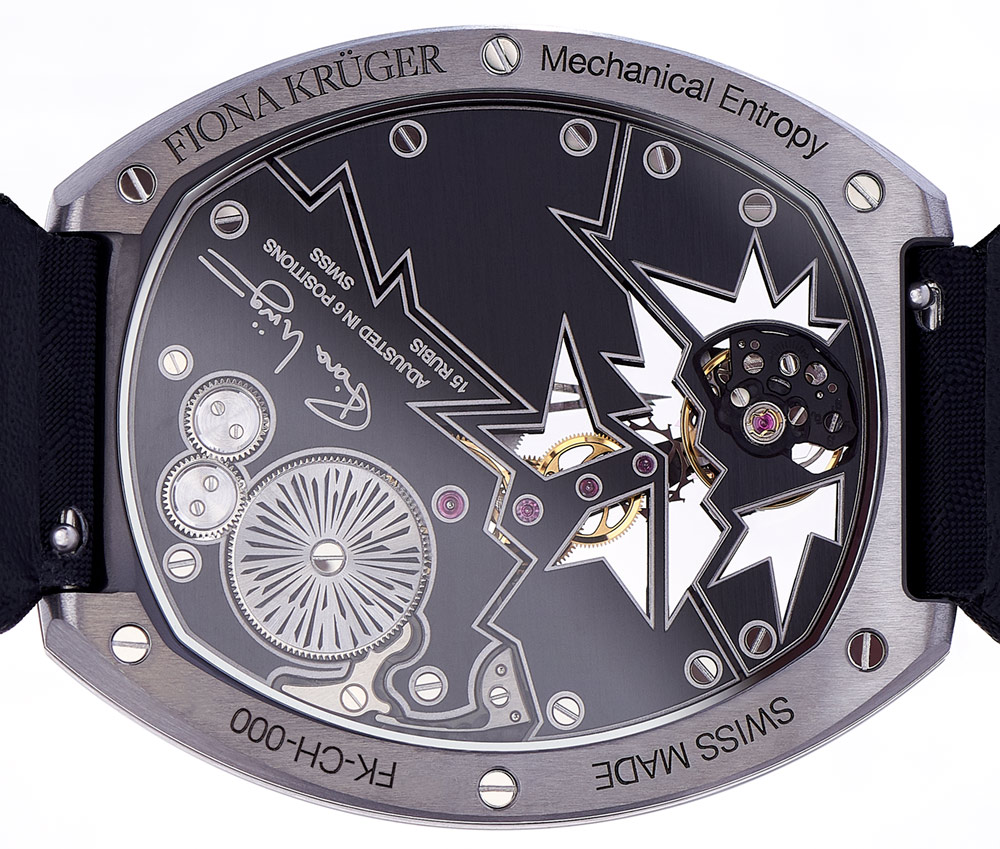 As symmetry was to be avoided in keeping with the watch’s theme, the hour and minute wheels are off-center. I can’t tell for sure from these pictures if the mainspring barrel’s cover decoration is engraved or actually skeletonized, but either way it is a nice touch. The various levels of the movement, followed by the hands above, with the indices floating over it all should make for a cool three-dimensional effect for the explosion motif. The Chaos I movement is manually wound with a power reserve of 50 hours, and it was developed by Fiona Krüger with Geneva-based movement maker Agenhor, who has been responsible for a number of notable haute horology projects. 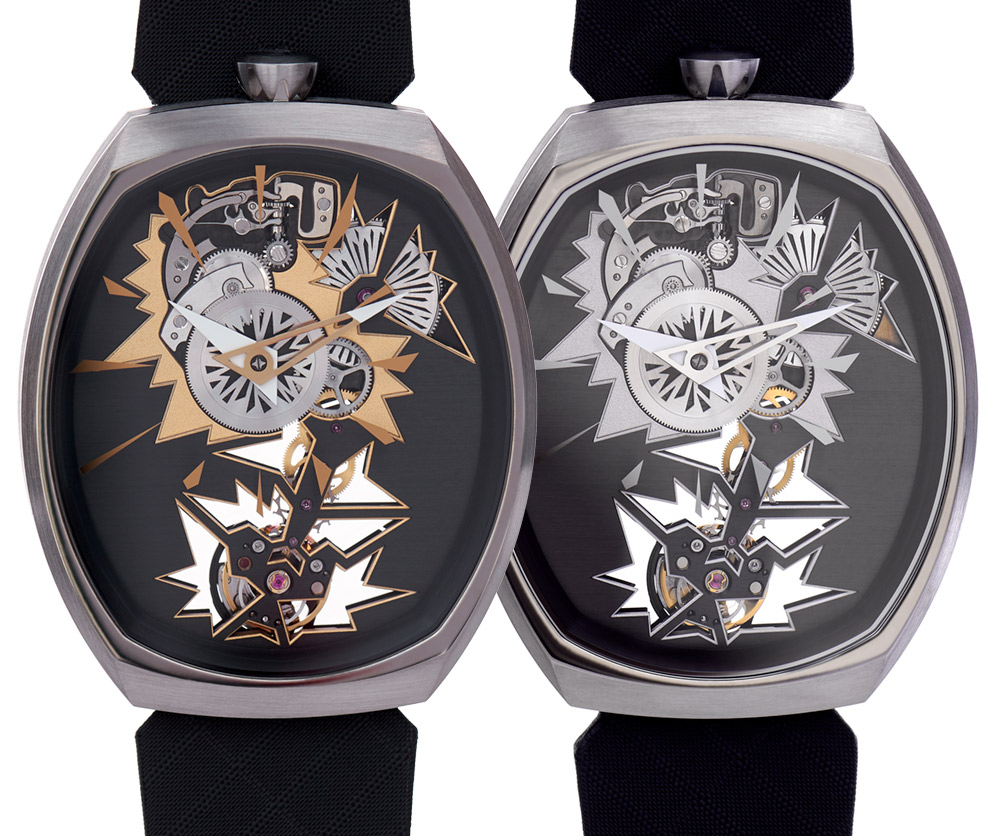 Even with the apparent busyness of the face, Krüger has used her negative space well and even achieved something of a minimalist feel. My first reaction upon seeing the Fiona Krüger Chaos Mechanical Entropy watch was a sort of bedazzlement, but even having looked at it longer and more closely (at least in pictures) I find I am still interested. The integration of each element into the overall design goes a long way – and indeed should be expected at this price point. The Fiona Krüger Mechanical Entropy watch will be limited to 40 pieces per year and comes on a hand-stitched “technical fabric” strap (with quick release) for a price of 26,500 CHF. fionakrugertimepieces.com