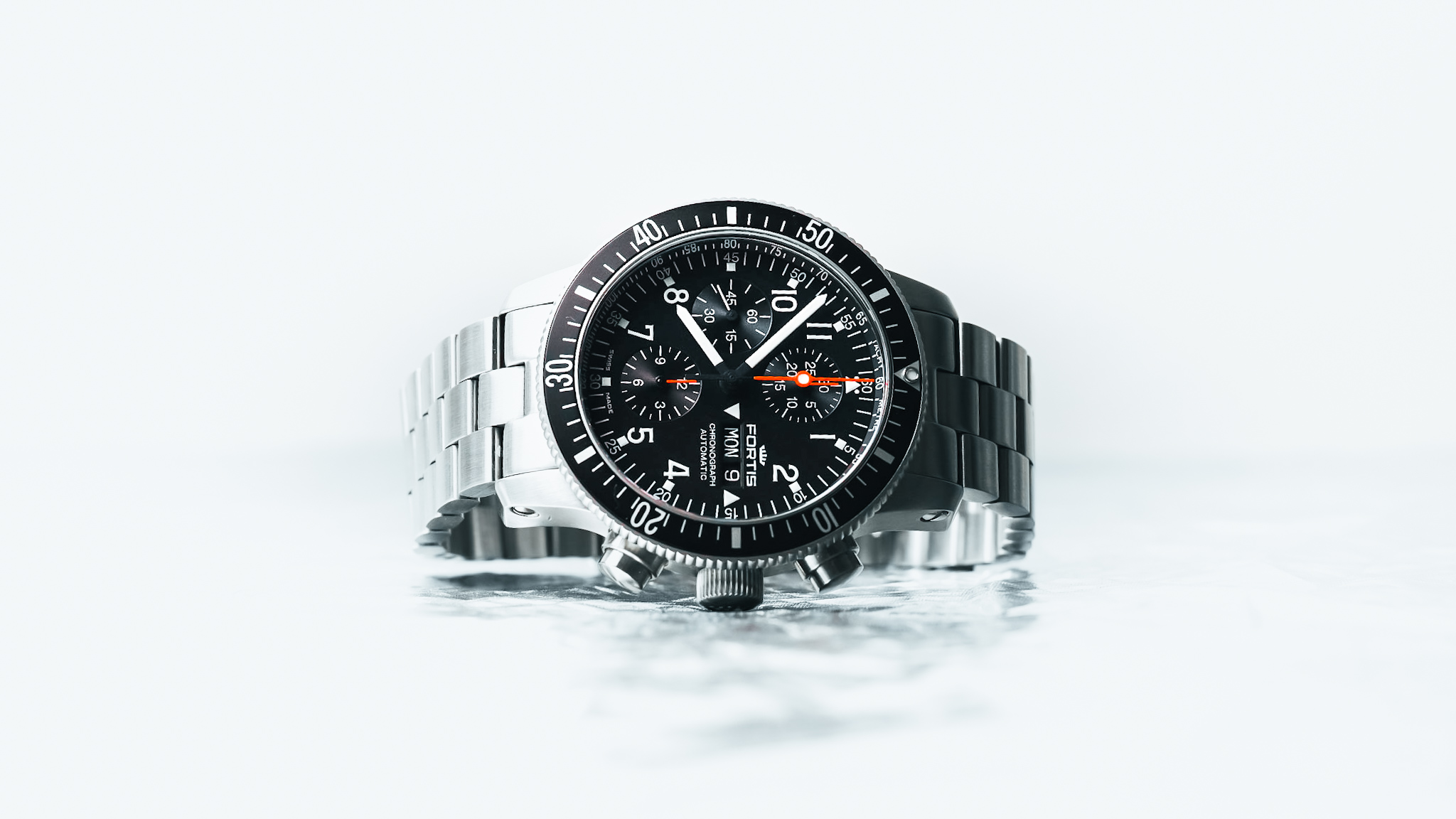 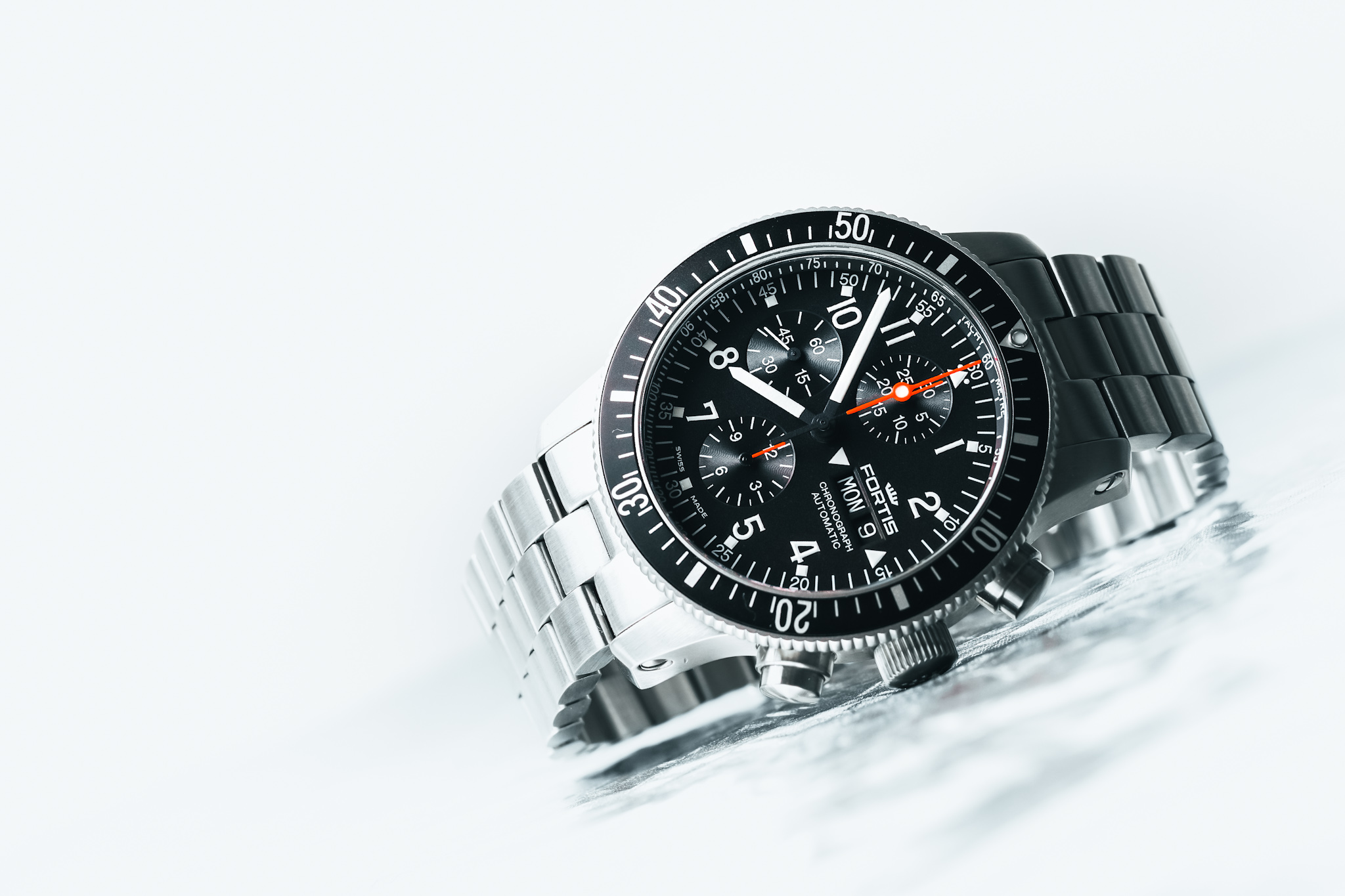 As the story goes, a Russian Cosmonaut was in the middle of performing some routine maintenance on the outside of the International Space Station when he found himself without a crucial tool needed to complete one of the tasks at hand: a hammer. Rather than abort the spacewalk and leave the task uncompleted, the resourceful ISS crewman removed the Fortis Official Cosmonauts Chronograph strapped to the exterior of his spacesuit, and used it as a blunt instrument to hammer a rivet back in place and complete the repair. 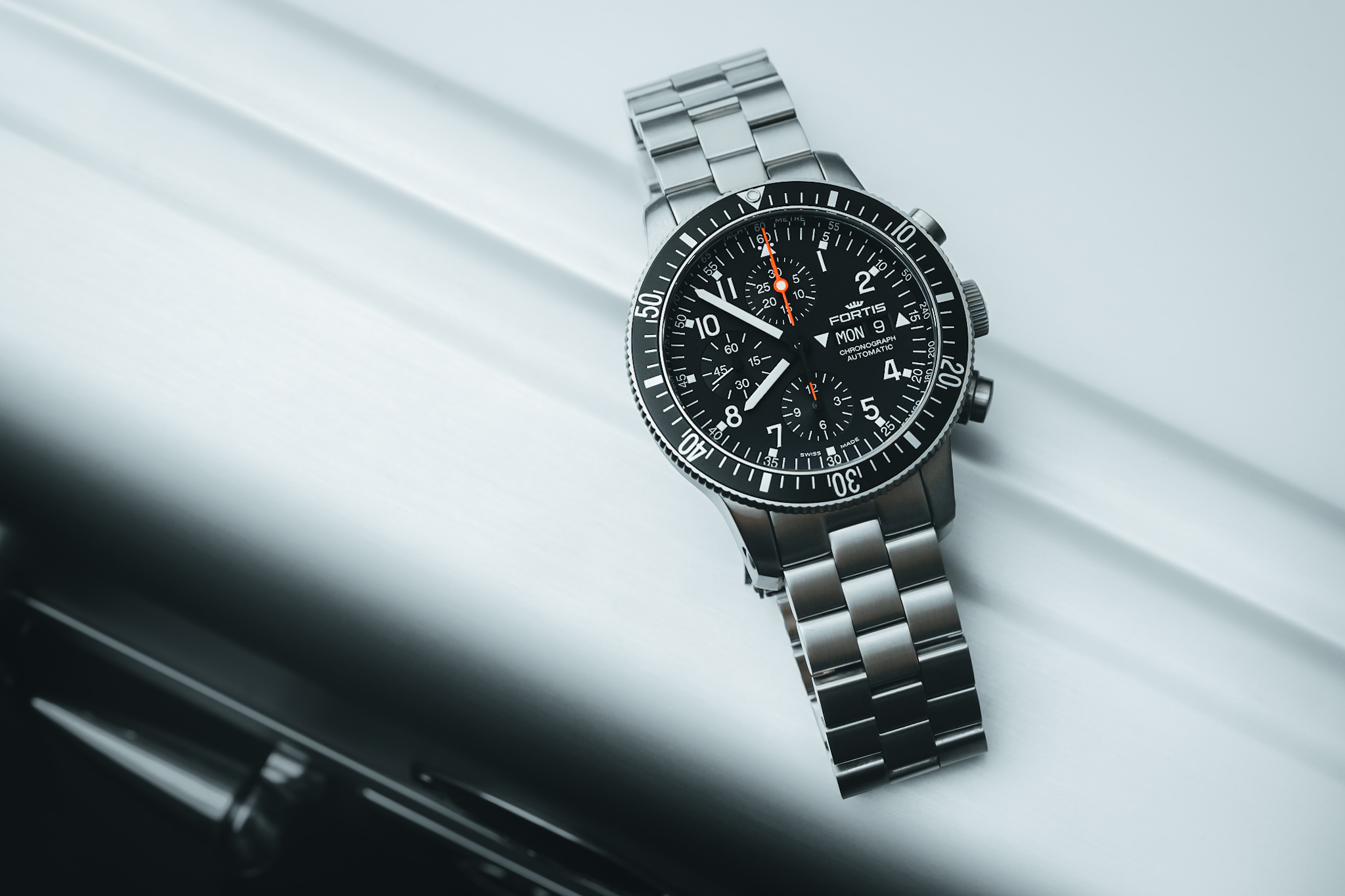 Since 1994 when it was first issued to the Russian Roscosmos space program, the Fortis Cosmonauts Chronograph has been the cornerstone of the Swiss watchmaker’s offerings. And over the course of the following three decades, numerous aesthetic updates, and two different space stations, it has impressively logged over 100,000 orbits — a figure that puts it well within the league of that “other” Swiss-made chronograph. But unlike the Speedmaster, the Cosmonauts Chronograph was meant to illustrate a different aesthetic entirely — one of precision and reliability but also one of brute force in a pinch. Also unlike the Speedmaster, which originally came to life as a racing watch, the Cosmonauts Chronograph was only ever a space watch, purpose-built to serve the very specific needs of a very specific type of user.

In their earliest variations, the Fortis chronographs originally issued to Roscosmos crew for use aboard the space station Mir were built around the legendary Lemania 5100 movement, which suited the purpose-built intent of the watch quite well, while also continuing to illustrate the now-obvious fact that automatic chronographs are just as functionally sound as their manually wound counterparts in zero gravity. Granted, this point had already been proven a decade prior in 1985 when Reinhard Furrer wore a Sinn 140 as part of the Spacelab D1 mission, but the Fortis Cosmonauts represented a product issued to an entire space agency for its use and not just a personal watch worn in space by a single astronaut. From a functional standpoint, the 5100 also offered a 24-hour indicator and the now-iconic center-mounted minute counter, which is more legible and could be more preferable, depending on some use cases. 5100-equipped Fortis Cosmonauts chronographs have become quite collectible and serve as the spiritual design inspiration for Fortis’ current Classic Cosmonauts collection of watches. 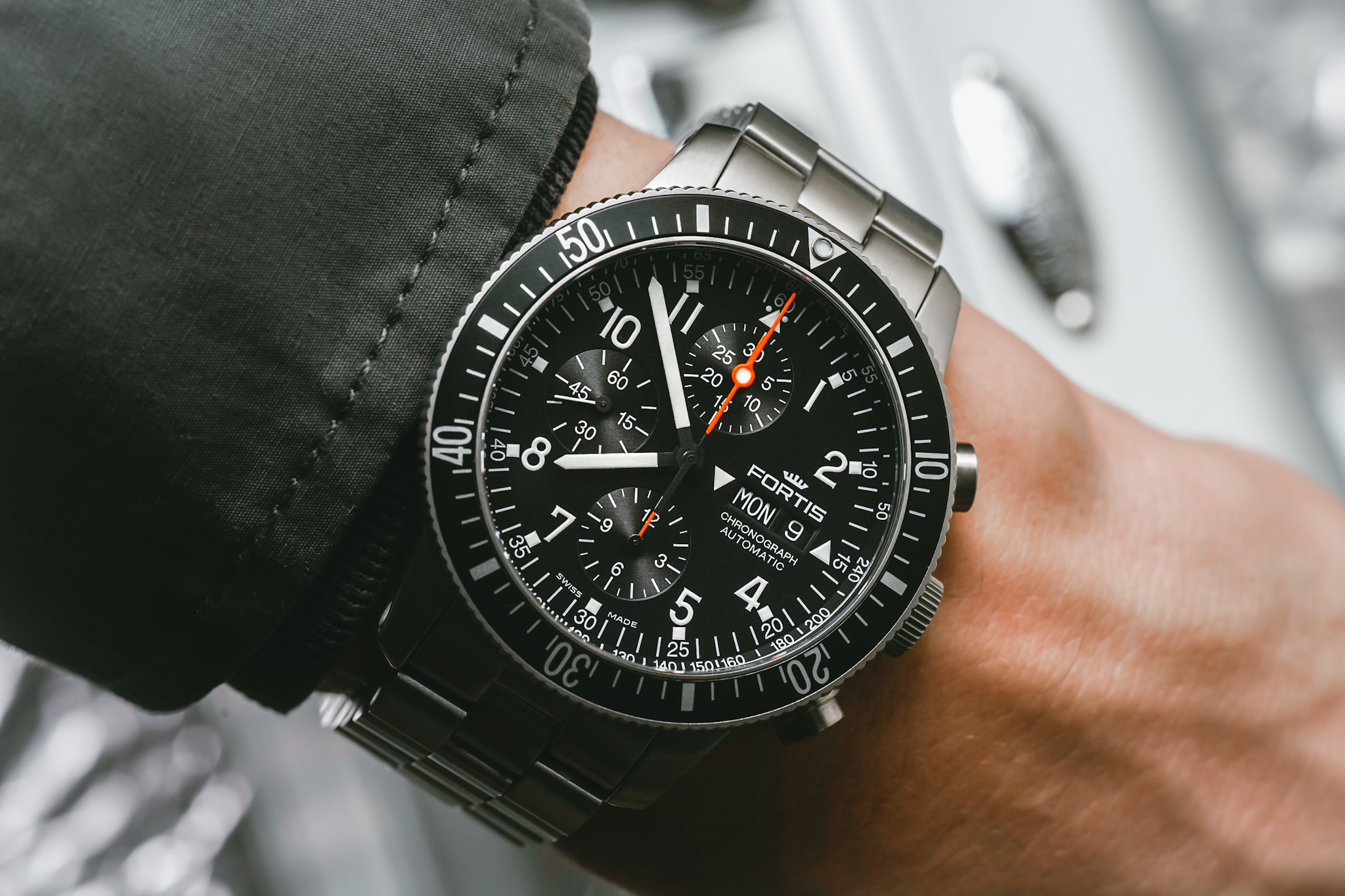 The current B-42 Cosmonauts Chronograph, where “B” stands for ‘Beobachtungsuhr,’ German for ‘observation watch,’ and with ’42’ representing the size of the case

Though the Cosmonauts Chronograph’s earliest Lemania-equipped references were small, 38mm affairs, the B-42 reference introduced in 2003 — the same that remains in service aboard the ISS today — is anything but. Powered by the more modern Valjoux 7750 movement, the brushed stainless steel case’s 42mm diameter seems sensible enough, but its 54mm lug-to-lug and 215-gram weight on its three-link bracelet exude a much stronger sense of purpose and a build quality that one could absolutely expect at this price point. Suddenly, envisioning it being strapped to the wrist of a spacesuit, or being used as a hammer in a pinch, doesn’t seem like so much of a stretch of the imagination. Though the tritium has been replaced with green Super-LumiNova, a neat hat-tip to the original Cosmonauts Chronograph persists in the fluorescent orange accents found on the center-mounted second counter, along with the hands mounted to the 12-hour and 30-minute totalizers. Legibility of both is excellent, thanks to the flat sapphire crystal, liberally finished on both sides with AR-coating, which casts a light purple tint at some viewing angles. 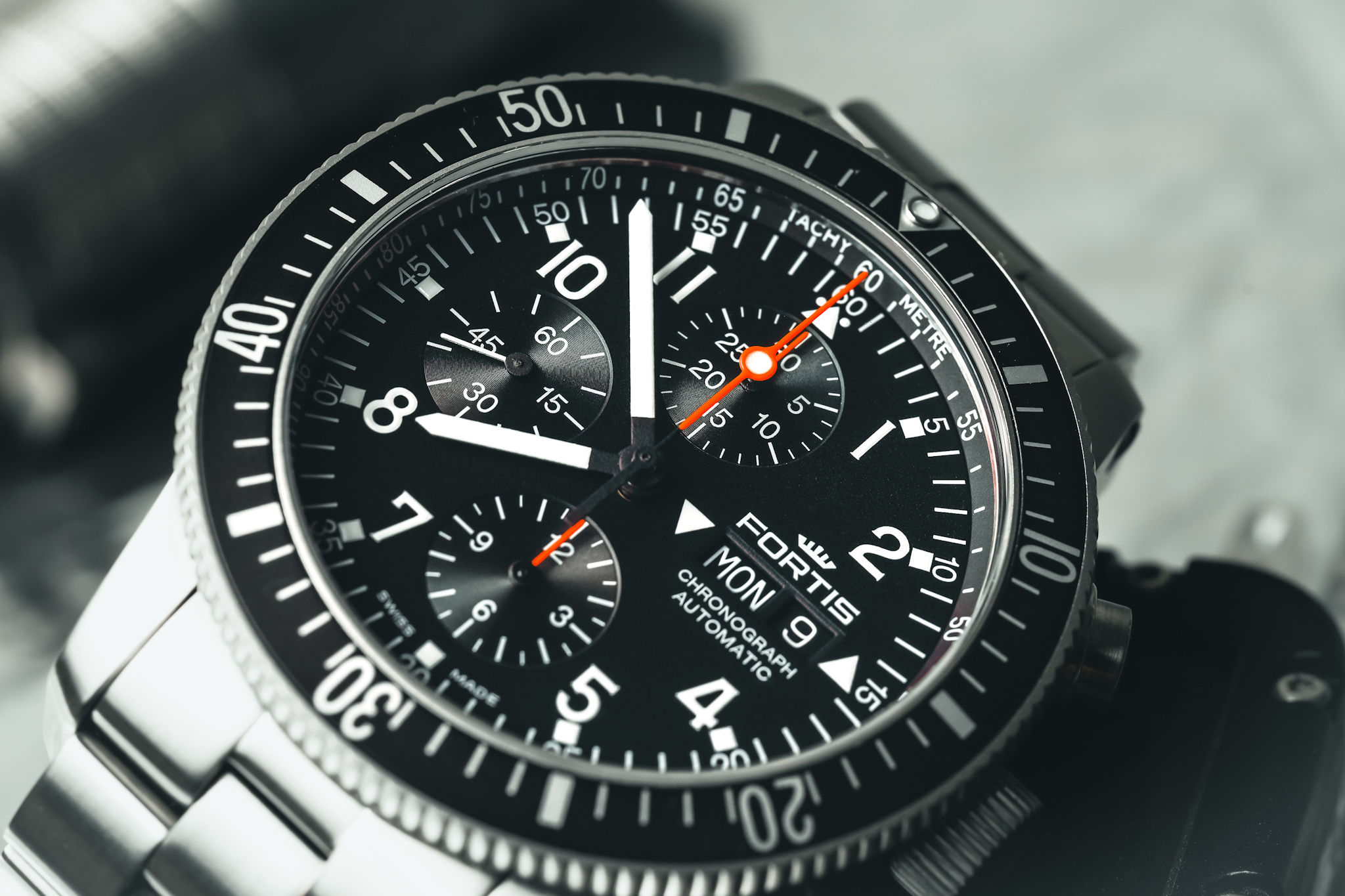 Cosmonauts no longer have to choose between a rotating bezel and a tachymeter as they once did — the B-42 combines both by putting the tachymeter inside the dial on a steeply sloped chapter ring. The bi-directional 120-click bezel complements the watch’s 200 meters of water resistance, which was a design and engineering choice specifically made to complement the fact that many space agencies — Russian and American alike — train their space crews by simulating a zero-gravity environment using scuba gear in specially designed pools. Equally impressive is that even though this water resistance has been achieved without a screw-down crown or pushers, the build quality of the sealing system is apparent through the pusher action, which understandably requires a firm grip on the 9 o’clock side of the case to fully engage.

An impressive alarm-equipped variant of the B-42 Cosmonauts Chronograph also exists, after cosmonauts requested an alarm module be added as an option to their issue watches to help them stay on schedule during various activities while aboard the spacecraft. Industrial designer and watchmaking superstar Paul Gerber was put to the task and in 1997, developed the F-2001 Manufacture Calibre, yielding the world’s first mechanical alarm chronograph. Using the venerable Valijoux 7750 as a base, the F-2001 married a rare trio of complications specifically requested by Russian cosmonauts: a chronograph, an alarm, and GMT time. But more importantly, all the added complexity did little to increase the case size, or compromise the legibility of the B-42, whose overall usability remained paramount in the far reaches of low-earth orbit. This was no small feat for the then-independent Fortis, considering Gerber’s pedigree as a record holder whose talent and vision also helped construct the Superbia Humanitatis — the world’s most complicated wristwatch.

Roscosmos isn’t the only space exploration agency supported by Fortis. In 2018, the brand equipped a team of Austrian researchers with a series of special-edition chronographs as they performed simulations of a Mars landing & subsequent construction of a research base in the Dhofar region of Oman. The aim of the monthlong Amadee-18 expedition in the remote desert was to study and prepare for what the future of human and robotic exploration of Mars might look like. Sharing the name Amadee-18, this particular special edition edition is built around the standard B-42 Cosmonauts Chronograph, but is rendered in a black PVD-coated stainless steel case and matched with a canvas strap that’s been fitted to the case with the Cosmonauts’ signature oversized screws. The team’s official mission patch replaces the running seconds subdial at 9:00. 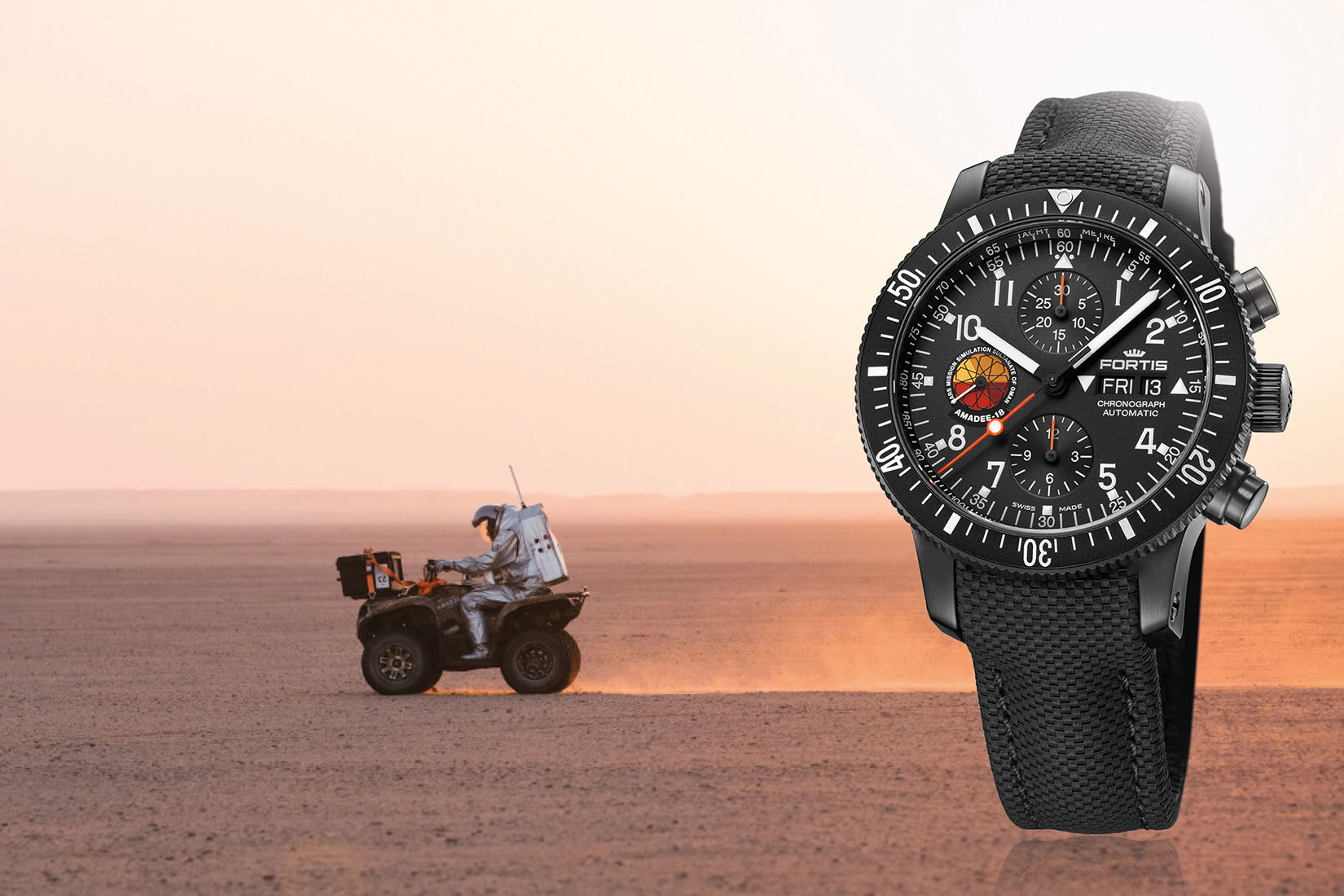 At the end of the day, the Fortis Cosmonauts Chronograph is a far cry from the faux-tool luxury objects we’re used to fawning over. It’s never walked on the moon or saved an Apollo crew from any doomed mission, it doesn’t have a day of the week dedicated to its sharing on social media, and to my knowledge hasn’t ever been worn onscreen in any major Hollywood motion picture. But what it lacks in sexy, real-world marketability, it more than makes up for with the grit and tangible integrity earned from having logged three decades in service, and well over 150,000 hours in space. And in its current iteration as the B-42, the Cosmonauts Chronograph continues to serve as an honest reminder that as long as it’s not status that you desire, pretty much anything can be a hammer if you’re brave enough.

The price of the Fortis Cosmonauts Chronograph is $3,250 USD, and you can learn more about the brand’s full collection of space-faring watches here: fortis-swiss.com. 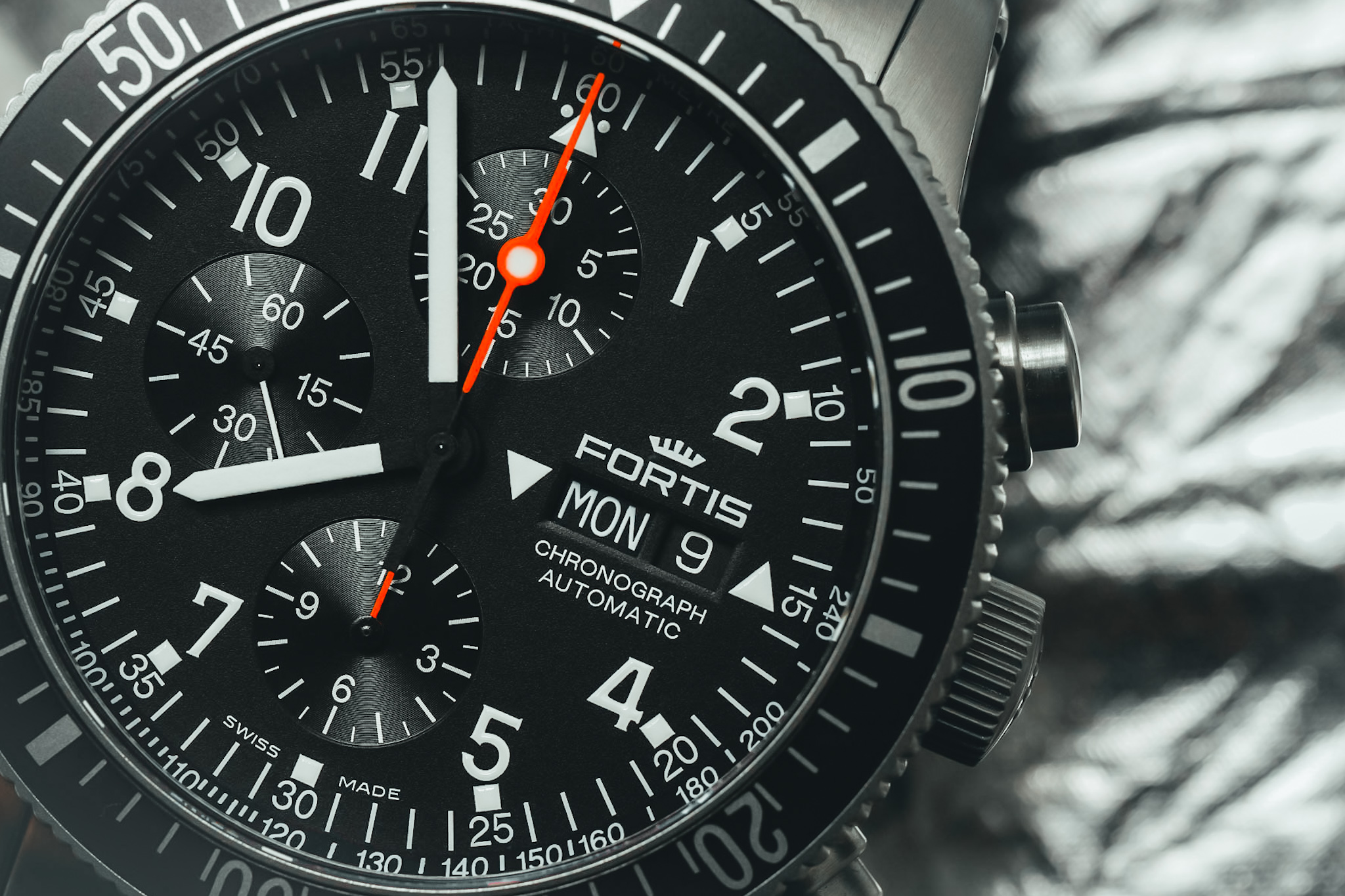